THE Street Machine team is in North Dinwiddie, Virginia for the opening day of Hot Rod Drag Week 2019. It’s registration and vehicle tech day at Virginia Motorsports Park, with an afternoon test ’n’ tune before the racing starts back here tomorrow morning.

Ben Neal’s turbo Barra-powered Toyota Cresta is back for its second crack at Drag Week. With a new built motor, the Cresta smashed through the eight-second barrier with an 8.39@156mph in Sydney recently, and hopes were high for an eight-second average this week. Unfortunately, the new motor decided to drop a valve last week in Charleston, South Carolina, forcing Ben and the team to swap back to the motor that he used at Drag Week last year.

The car’s best effort in the test ’n’ tune session was a 9.4@143mph. Benny is hoping the Cresta can be the first car to do Drag Challenge Weekend, Drag Week and Drag Challenge all in one year. “It looks like a product failure,” said Benny. “We actually had a look at the valve stem and there’s a shadow of a fatigue line in it. That basically put that engine to bed. We didn’t have any spare top-end parts to repair it, so the spare engine went back in. We’ve obviously revised the tune to suit, because this is not as comprehensive as a built engine. But the car is running good; it’s all happy.” 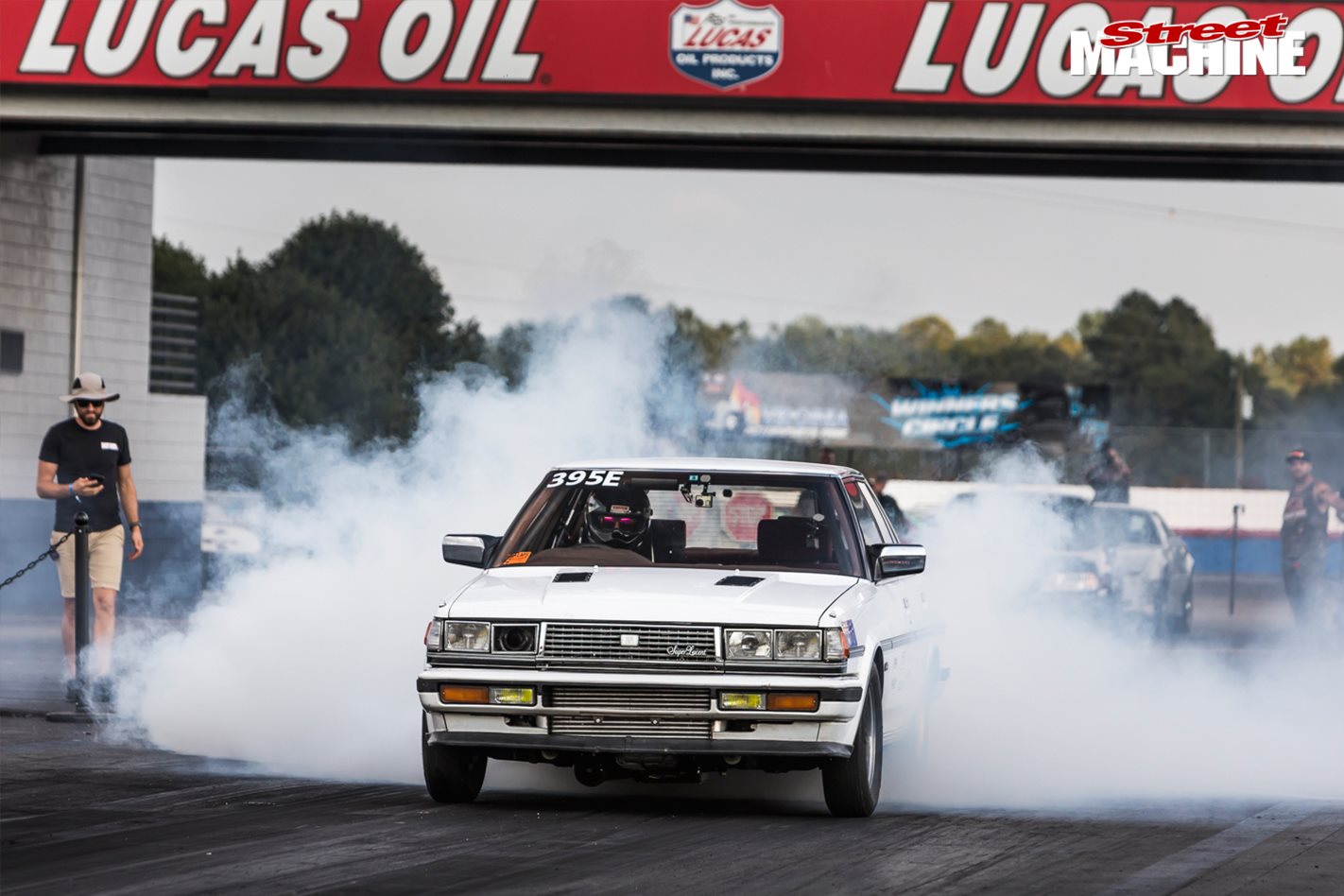 Queenslander Ben Paganoni has had some tough luck in this style of event. He intended to race at Drag Week last year, but his FG FPV F6 ute got held up on the docks and wasn’t released in time. Then, at Drag Challenge Weekend 2019, he was getting his XH Falcon ready to race before rainfall on the afternoon of Day One shut down the lanes. For Drag Week this year, he’s had the boys from The Skid Factory put a turbocharged Barra into a Fox-body Mustang sourced from Florida, which on paper should be capable of running in the eights, but their prep has not been without drama.

While leaving Charleston, South Carolina last week, Ben noticed an exhaust rattle, which turned out to be a big-end bearing failure. The car was transported to HED in North Carolina, where the team switched out the block for the one that had just come out of Ben Neal’s Cresta. Although the number-five piston was slightly damaged, they took the high spots off the top of it and everything appears to be working okay. The team crept up on the tune during the afternoon test ’n’ tune, finishing with a best of 9.1@153mph. 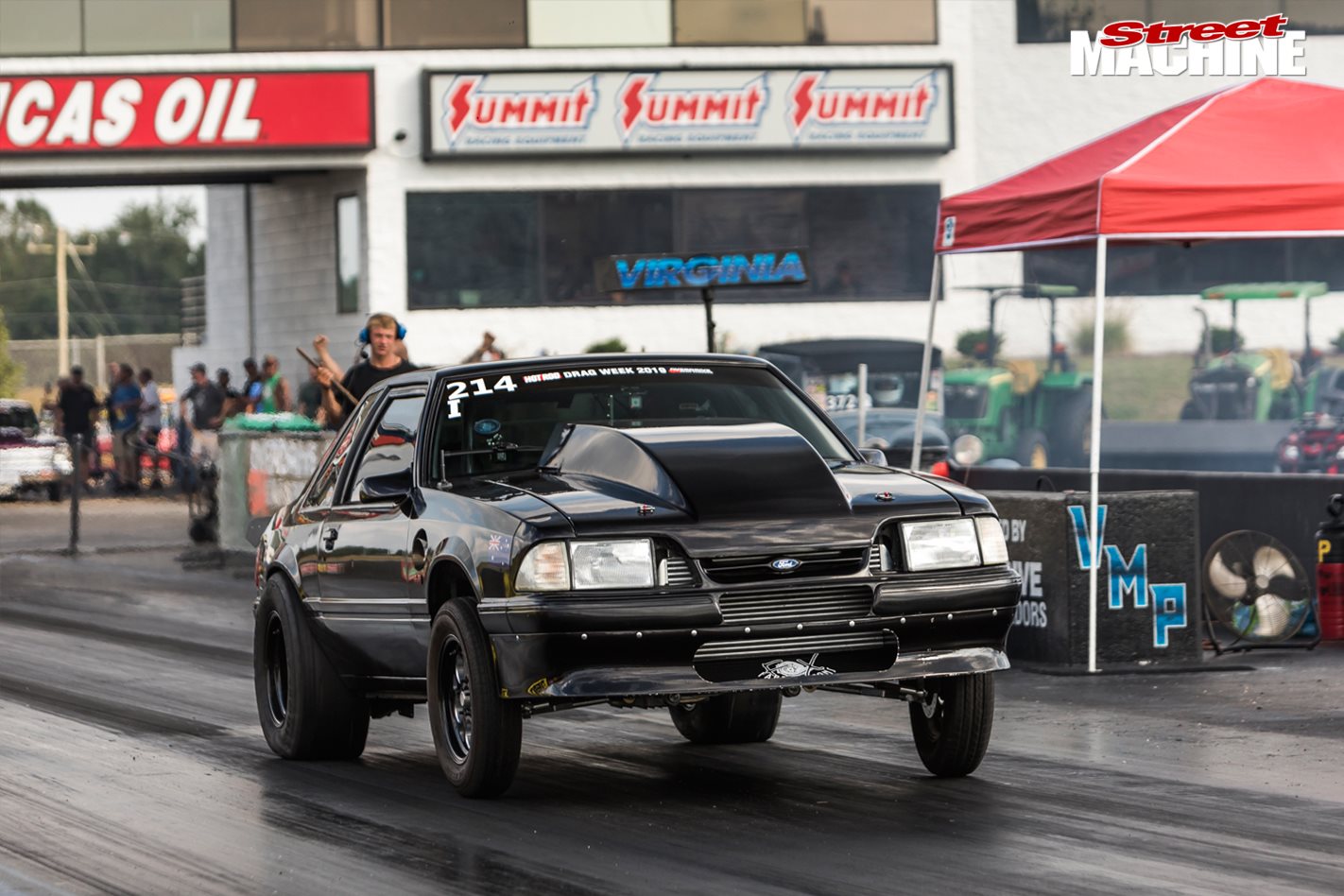 Harry Haig has the Aussie Chevelle he calls ‘Stevo’ here for the fifth year in a row. The car has gone from running 14s in 2015 to eights last year. The ‘Aussie Chevelle’ is back for its fifth straight Drag Week, and owner Harry Haig is determined to maintain his perfect record of always having more fun than anyone else. The twin-turbo, 450ci Dart big block-powered ’69 Chevelle SS has improved year on year since it was first dragged out of a field in Kansas and raced at Drag Week 2015.

Last year it ran in the eights to finish runner-up in the Super Street Big-Block Power Adder class. “We’re not planning on leaning on it too hard,” Harry said. “It was running high eights last year, but we put a taller tyre on it and it was struggling off the line, so now we’ve put 3.5 gears in and adjustable brackets on the diff so we can move our pinion angle around. We tested it the other night and it’s working really good.” Harry did one pass in the afternoon test ’n’ tune session and went 8.8@156mph. 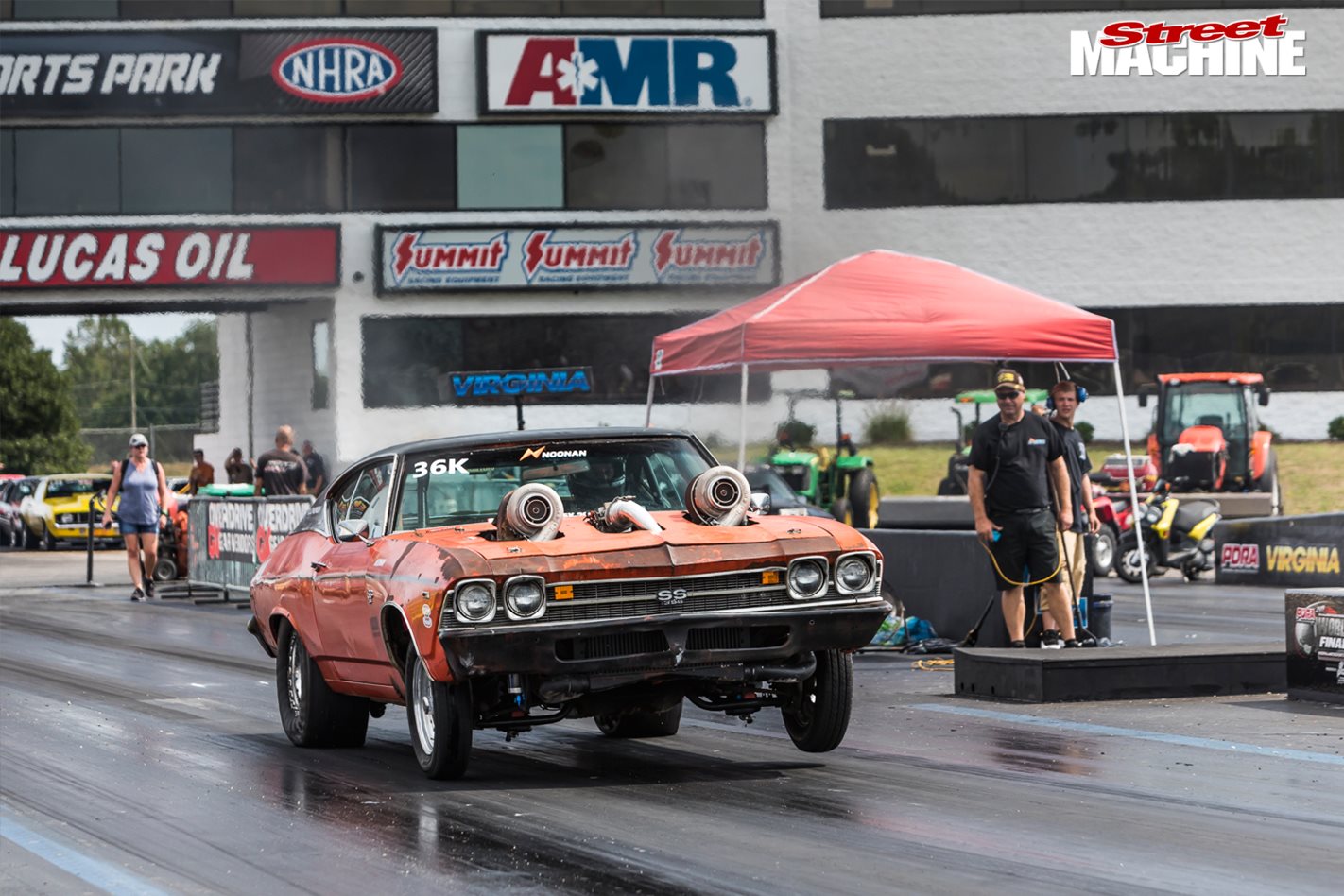 Future hall of famer Corty Haig, son of Harry, will get a start behind the wheel of the 1983 Malibu wagon, sharing driving duties with Robby Abbott, who campaigned the car at Drag Week 2018. “Corty is going to be all right,” said Robby. “He’s 16 and we’re hopefully gonna learn him the ropes of being a man.” Last year the wagon, dubbed ‘Malibu Stacy’, had a thrown-together 396-cube donk, and high 13s was the best it could muster. This year it’s got a 565ci big-block with a set of Pro2 heads, and Robby reckons there might be a mid-10 in it.

“We’ve had lots of little dramas with overheating,” he said. “The lower radiator hose was rubbing on the balancer; we’ve sorted that out. The flexplate came loose after we sent it to the dyno. I put a new alternator on it this morning, and I’m about to fix the alternator bracket that’s broken. And Drag Week hasn’t even started yet!” Robby took the Malibu out for a test run, but it turned out to be fizzer. “It spun the tyres, ran out of fuel, and the alternator belt came off,” said Corty. 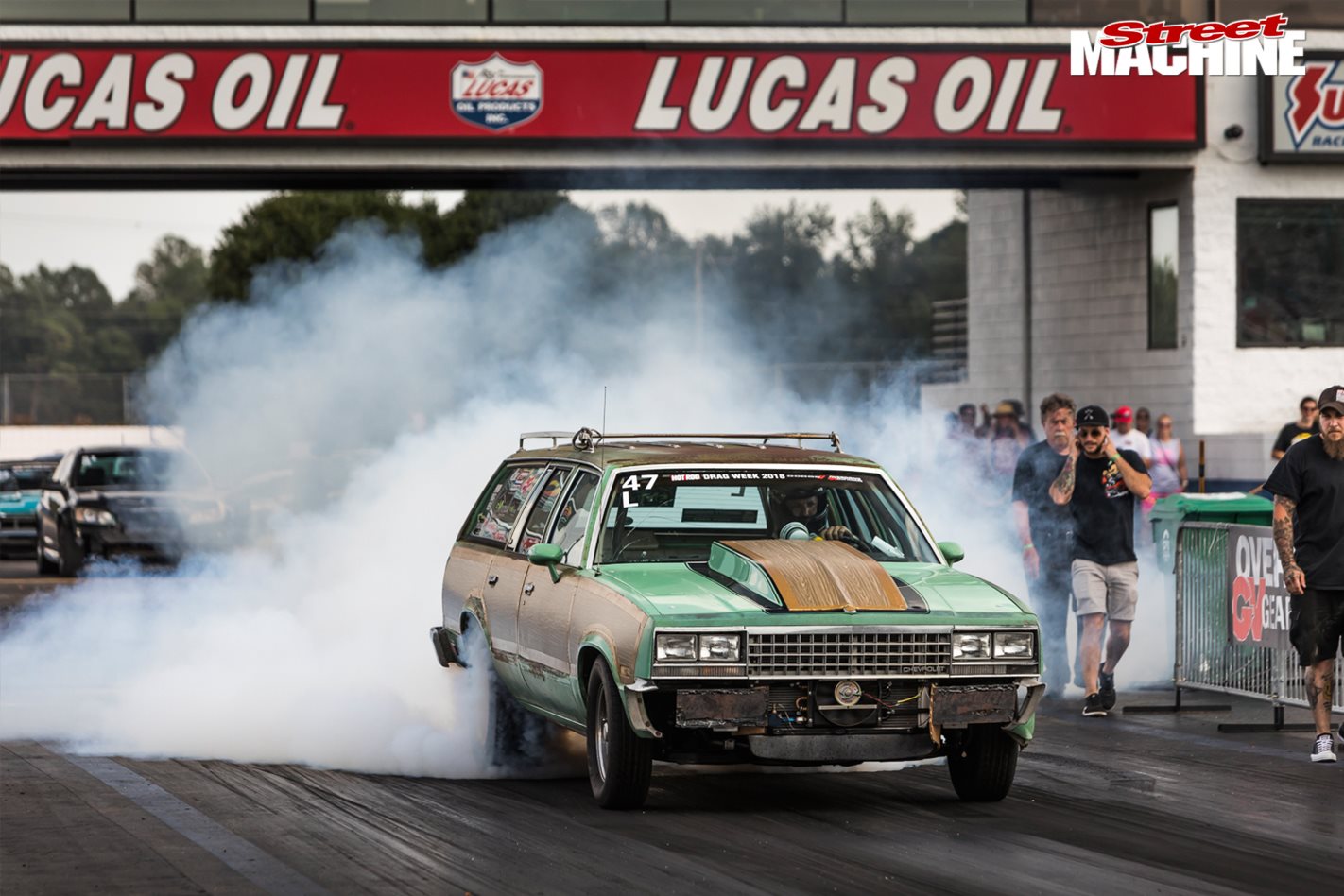 The 540ci BBC-powered ’55 Chev of Aussie father-and-son team Ross and Brenton Gault has had a few upgrades since last year’s Drag Week, where it ran in the high 10s. Now sporting a fibreglass bonnet and bumpers, a new 3800rpm converter, and with the gear ratio switched from 3.5s to 3.9s, the car has only been driven roughly 10 miles since last year’s event, but Ross was confident the Chev could fulfil its destiny. “We would love to run 10.3s,” he said. “I don’t think it can do any better than that, unless it’s making more than the 670hp I think it’s making. So 10.3s is the target.” 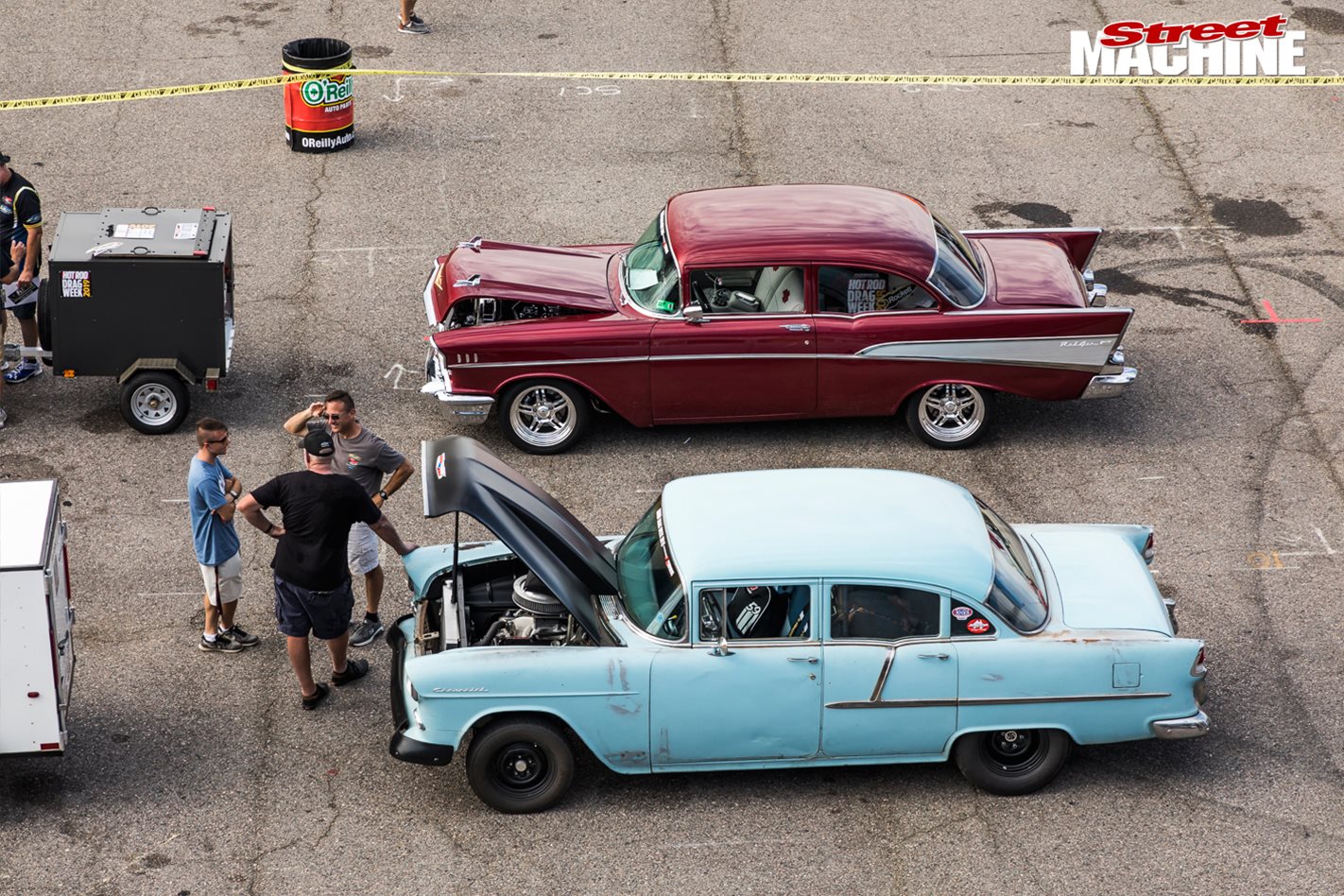 Among the big-gun contenders for the Overall win this year are Tom Bailey’s 2.0 ’69 Camaro Pro Mod, Dave Schroeder’s nitrous ’66 Corvette and Bryant Goldstone’s all-steel ’73 Javelin. Check them and some of our other favourite cars from rego day here.