Here are nine of the quickest, coolest cars at Hot Rod Drag Week

WHILE our primary mission at Hot Rod Drag Week is to follow the adventures of the Aussie teams, we’ll also keep a close eye on the fight for outright honours and any vehicle that is just plain quick, cool or both! Here’s our selection of cars to watch from tech day at Virginia Motorsports Park. Racing begins tomorrow, so stay tuned! 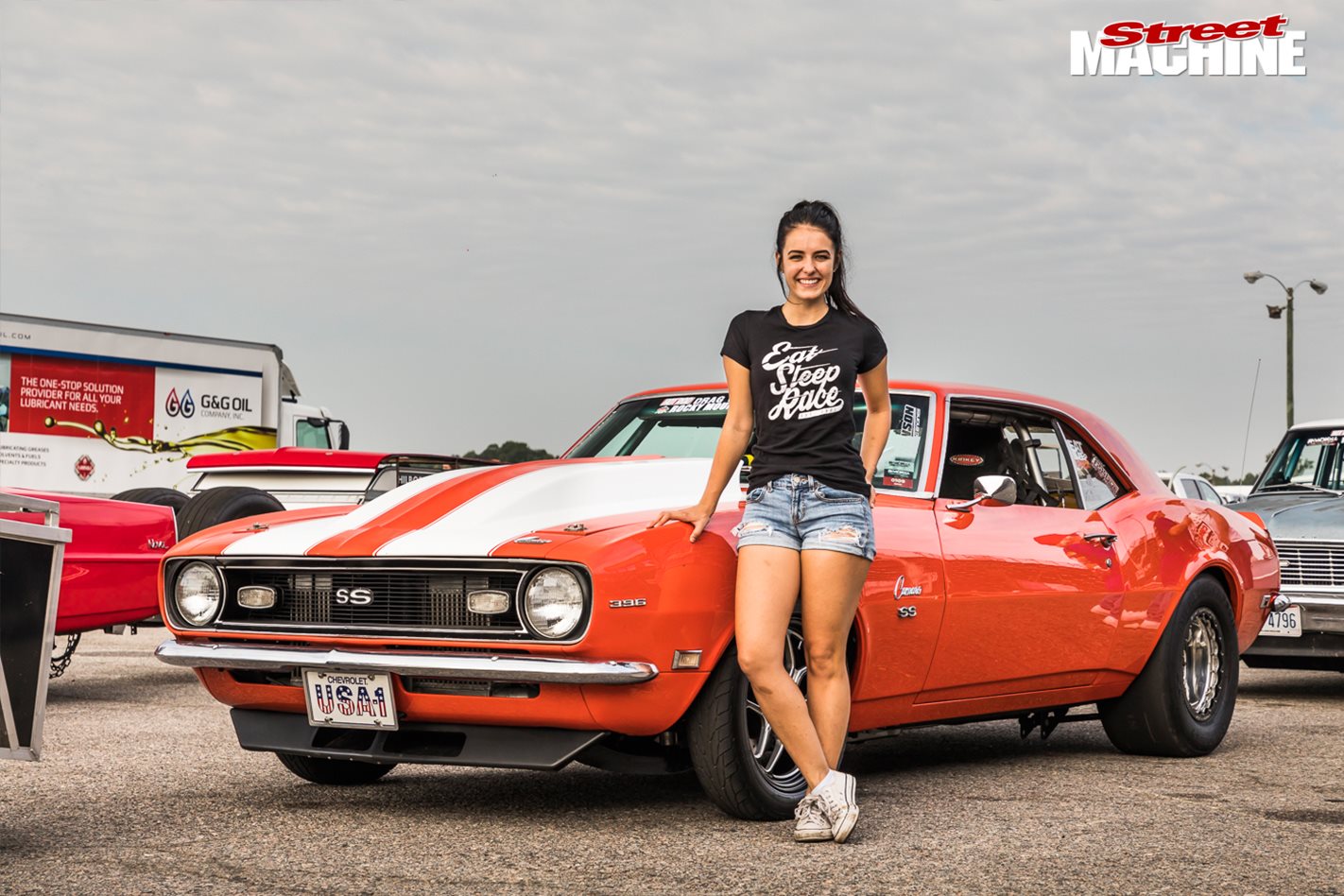 Alex Taylor first raced at Drag Week in 2013, when she was just 16. She’s now a regular in the eight-second ‘Badmaro’ Camaro, which suffered a hurt crank and a couple of bent rods while racing down Woodward Avenue only a month ago.

Rather than miss out on Drag Week, Alex busted her butt to get the twin-turbo 427-cube LSX combo fixed up.

“The rods are completely custom so I had to have them made in three weeks; Crower did them for me in two weeks,” Alex said. “In the process we put in new pistons, rings, all that. Mike Henson did all the last-minute machine work and then we picked it up and put it all together on Monday, but when I started it up, I had an issue with the heads, I had water coming in. AFR overnighted me a pair of heads from California and Henson machined those and got them to me. So it’s a been a thrash. But I haven’t missed a Drag Week since 2013 and I don’t want to miss one now.” 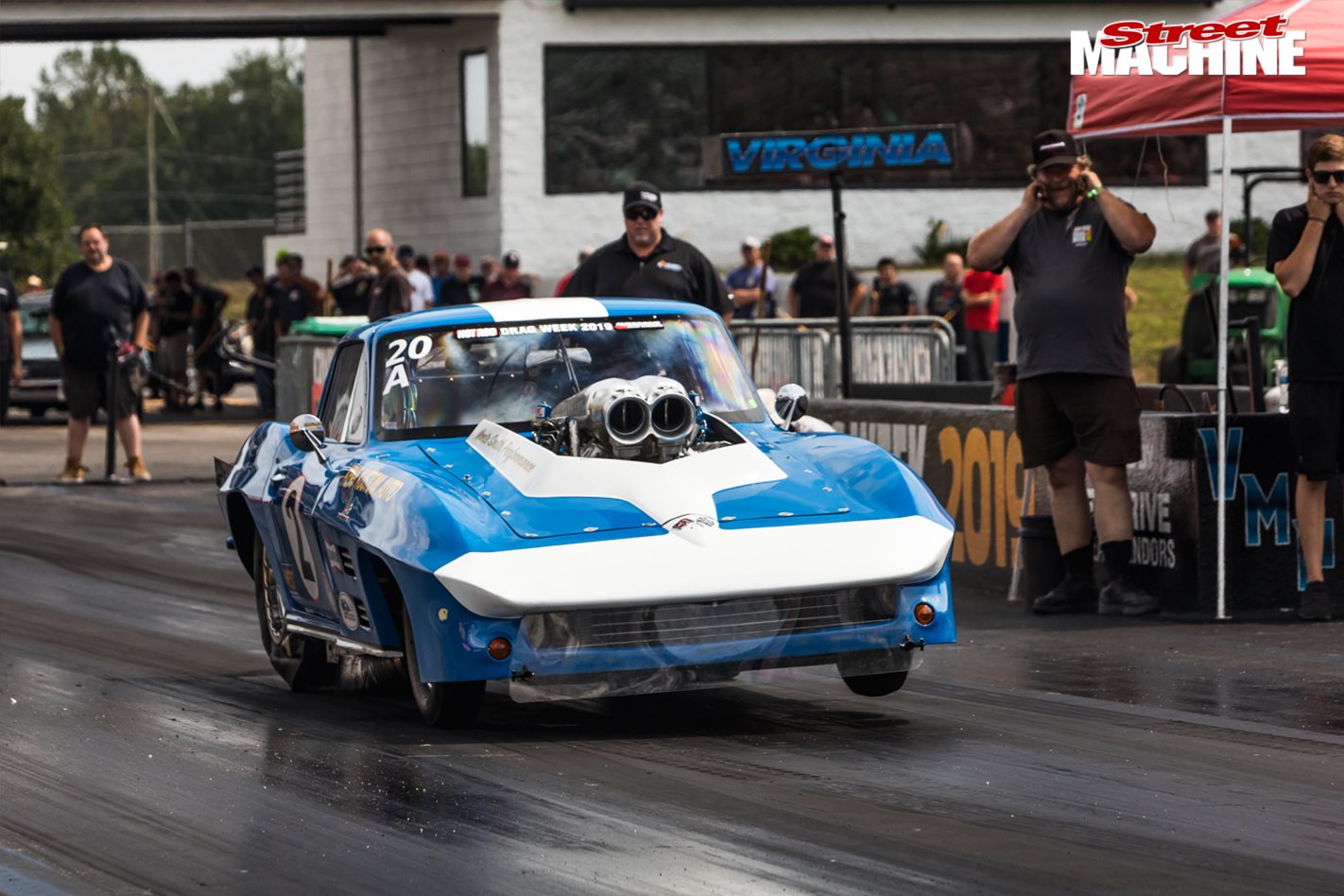 Among a field of quick turbo cars, Canadian Dave Schroeder remains loyal to the nitrous. The flashy Grand Sport-inspired livery on his ’66 Corvette does little to divert attention from the monster 872-cube Reher Morrison motor with four hits of Monte Smith nitrous. 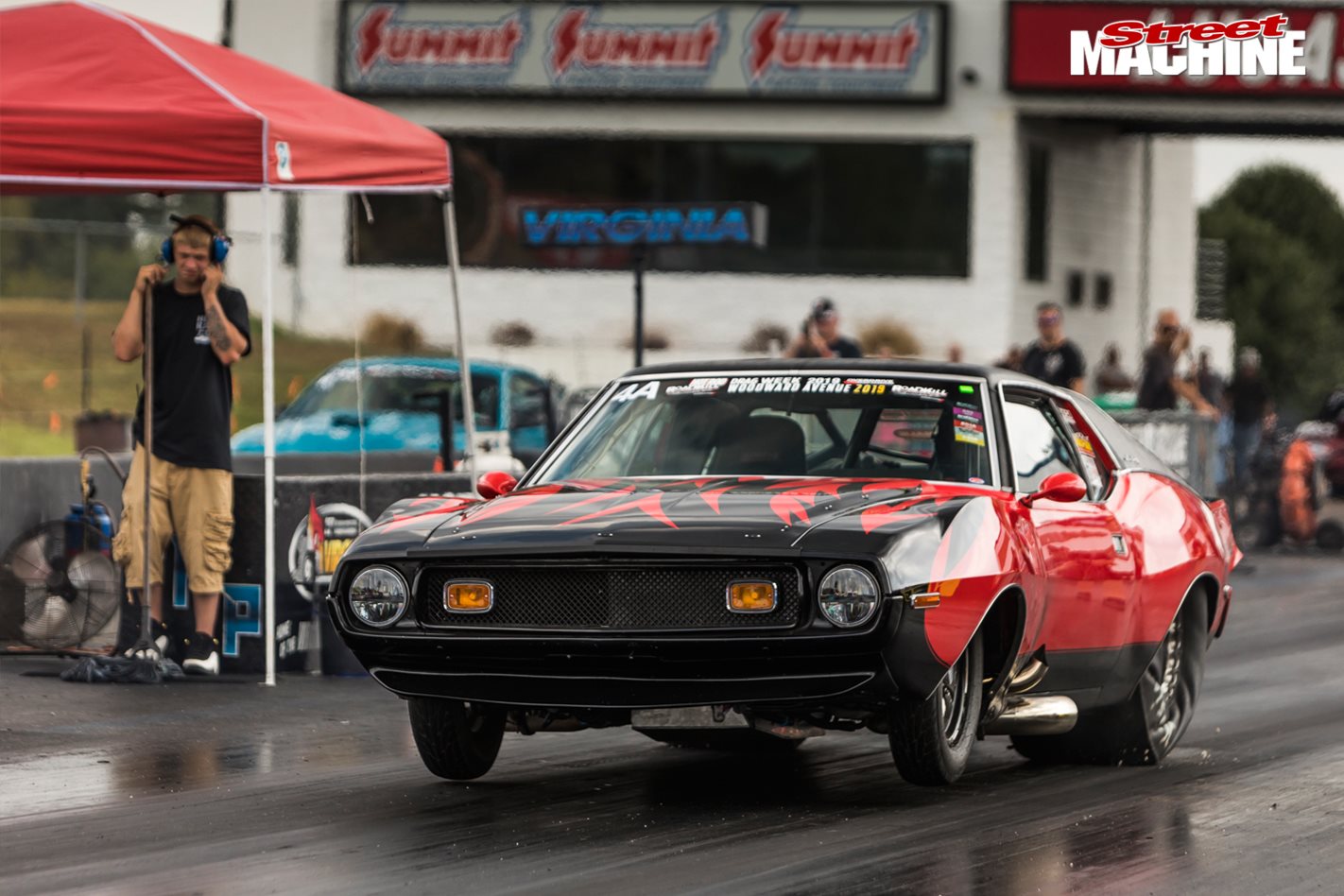 One of the coolest and quickest cars at Drag Week is the all-steel 1973 AMC Javelin of Bryant Goldstone out of Elkhart, Indiana. With a twin-turbo 572ci big-block Chev, Rossler Turbo 400 trans and nine-inch diff, the car has run 6.7s in Drag Weeks past. It’s been Overall runner-up twice, and it finished third last year after limping through the final day on seven cylinders.

It had previously been entered in the Ultimate Iron class, but this year is in Unlimited because of a switch in preferred race fuel. “We switched it to alcohol just last week, so basically we know nothing now,” Bryant said. “Our driving tune-up is now on a pump where it should be – a little pump instead of a big pump – and now we’ve got a big regulator, so our street tune is screwed up as well as we don’t have a handle on the race tune yet. We ran it a couple of times yesterday and we are getting a handle on it; now it’s just a matter of putting the power where we need it.” 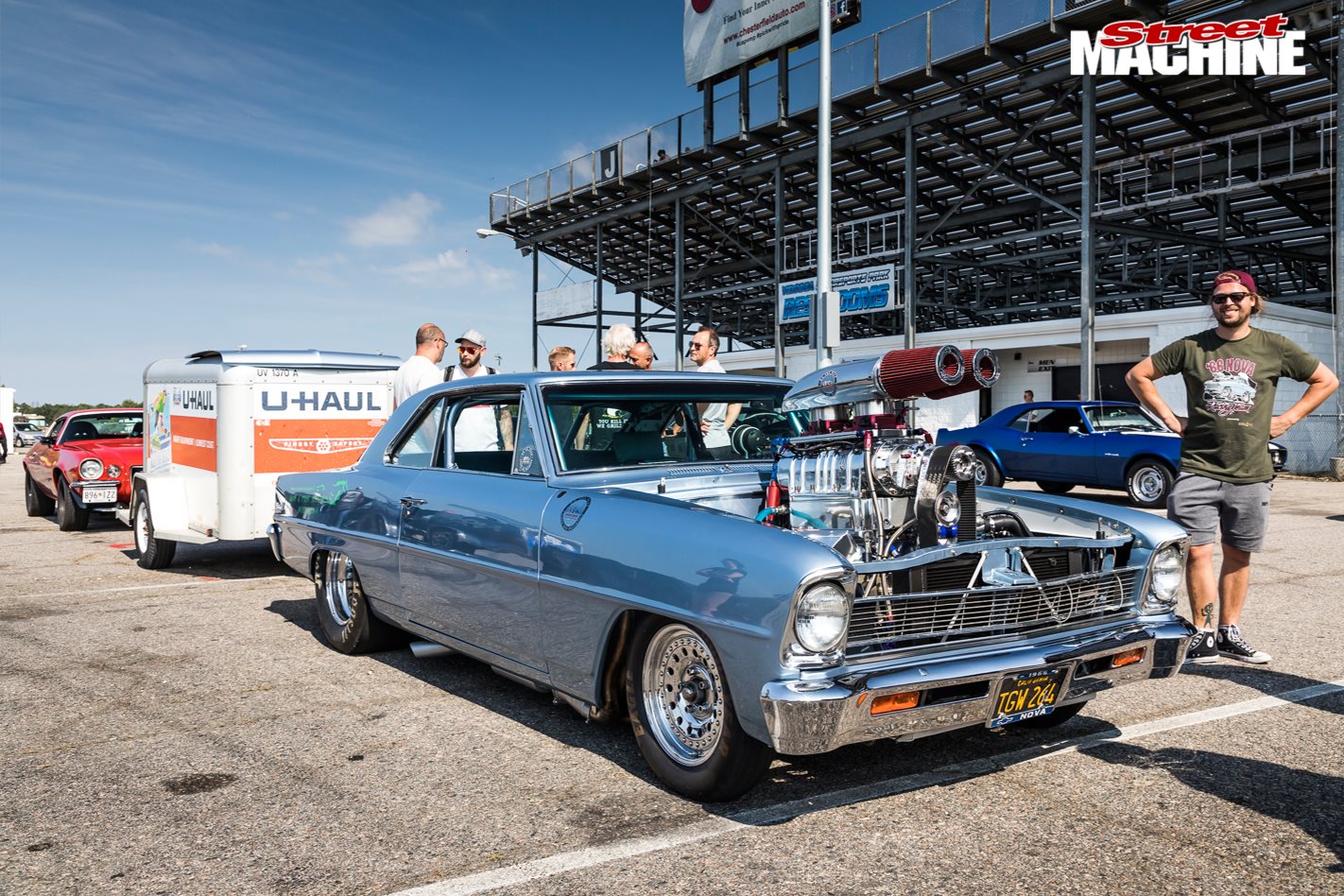 This blue ’66 Chevy Nova II started life in America, has spent 10 years in Austria being beefed up to ridiculous levels, and now it’s back in the US for a visit.

Austrian revhead Robert Willinger bought the car while on a family holiday in Los Angeles in 2009. The stack of shiny stuff rising from the engine bay comprises a 572-cube Shafiroff donk with a 10/71 BDS blower, intercooler and FAST XFI injection. It’s backed by a Powerglide and nine-inch.

Since Austria is sorely lacking in drag strips, Robert has raced the car in Italy, Switzerland and Germany, and its PB is a 9.4@145mph.

“It’s perfect on the highway, but it doesn’t like traffic,” said Robert. “I think we will travel between the tracks with the hood off this week. Luckily we are here in America, because if you did this in our home country you would probably be on the front of the newspaper the next day.” 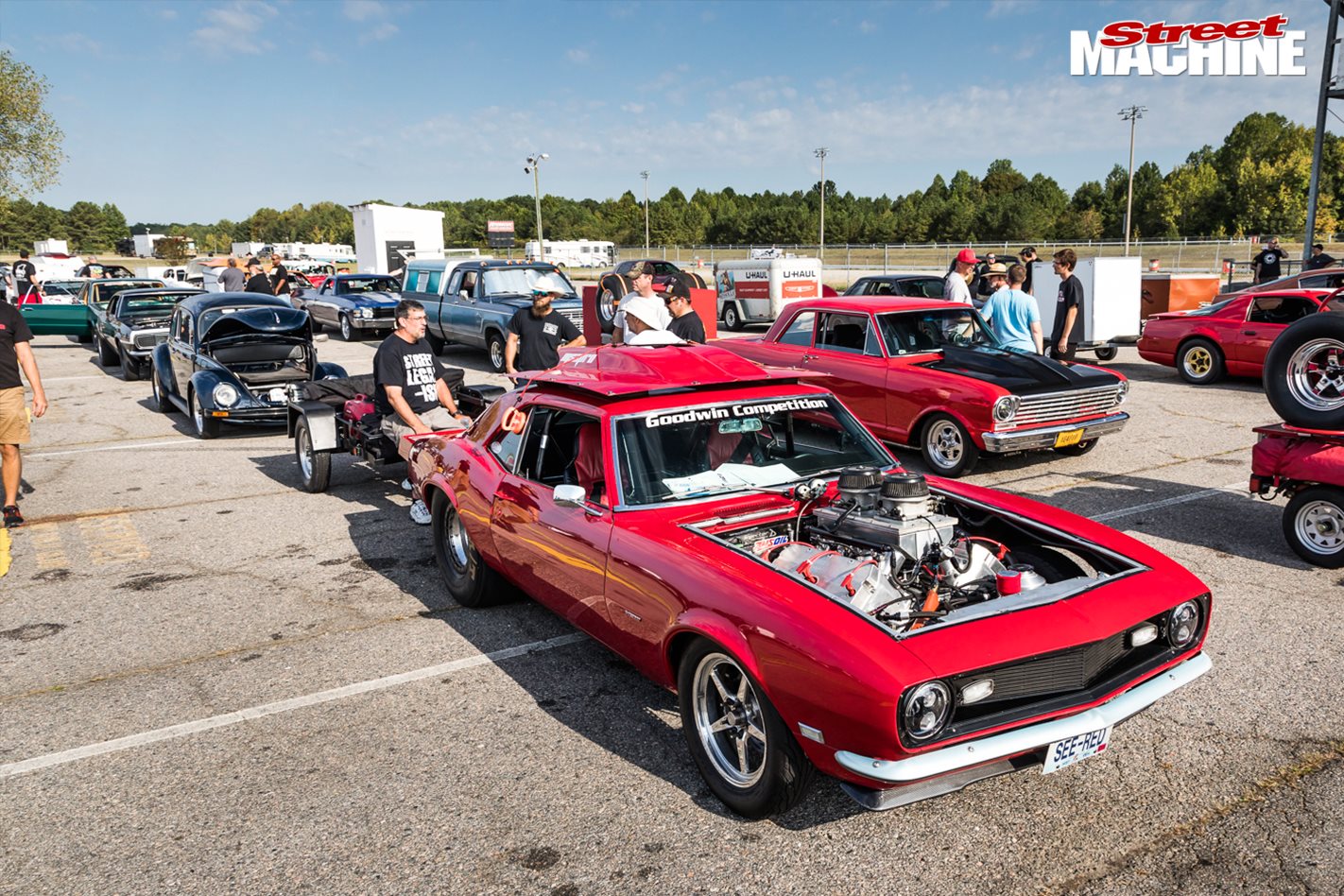 James ‘Doc’ McIntire’s ’68 Camaro is the quickest and fastest naturally aspirated street car in the world, with a PB of 7.96@169mph. Doc has owned the car since he was in high school and has continued to make it better and faster. The engine is a custom Goodwin Competition 709ci ‘semi-Hemi’ backed by a Powerglide and Ford nine-inch with a Gear Vendors.

The Camaro has been to Drag Week 10 times and finished every time. “Drag Week is the best week of no sleep you can have,” said Doc. 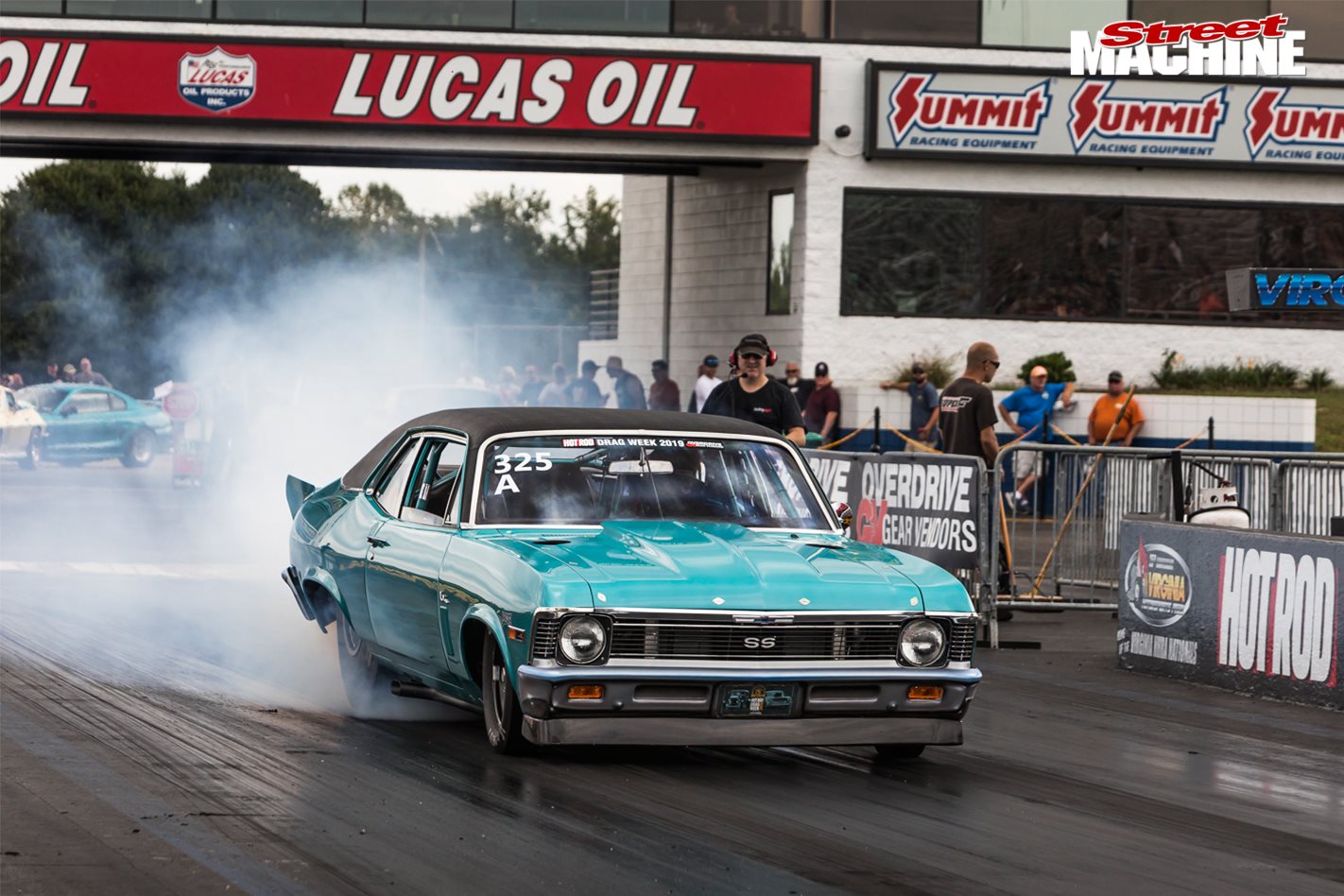 Steve Spiess has owned his twin-turbo Ford-powered ’69 Chevy Nova since 1990, but the last time it was raced was in 1992, when it was much tamer than it is now. A few years ago, Steve and his co-pilot JT began building it into an insane full-chassis beast with an all-aluminium body and carbonfibre panels throughout the cockpit.

Since it’s a fresh build, it’s only done around 50 miles on the street and has had two hits on a race track, but Steve is quite confident in its abilities. “It’ll run 6.70s, maybe a little faster,” he said. 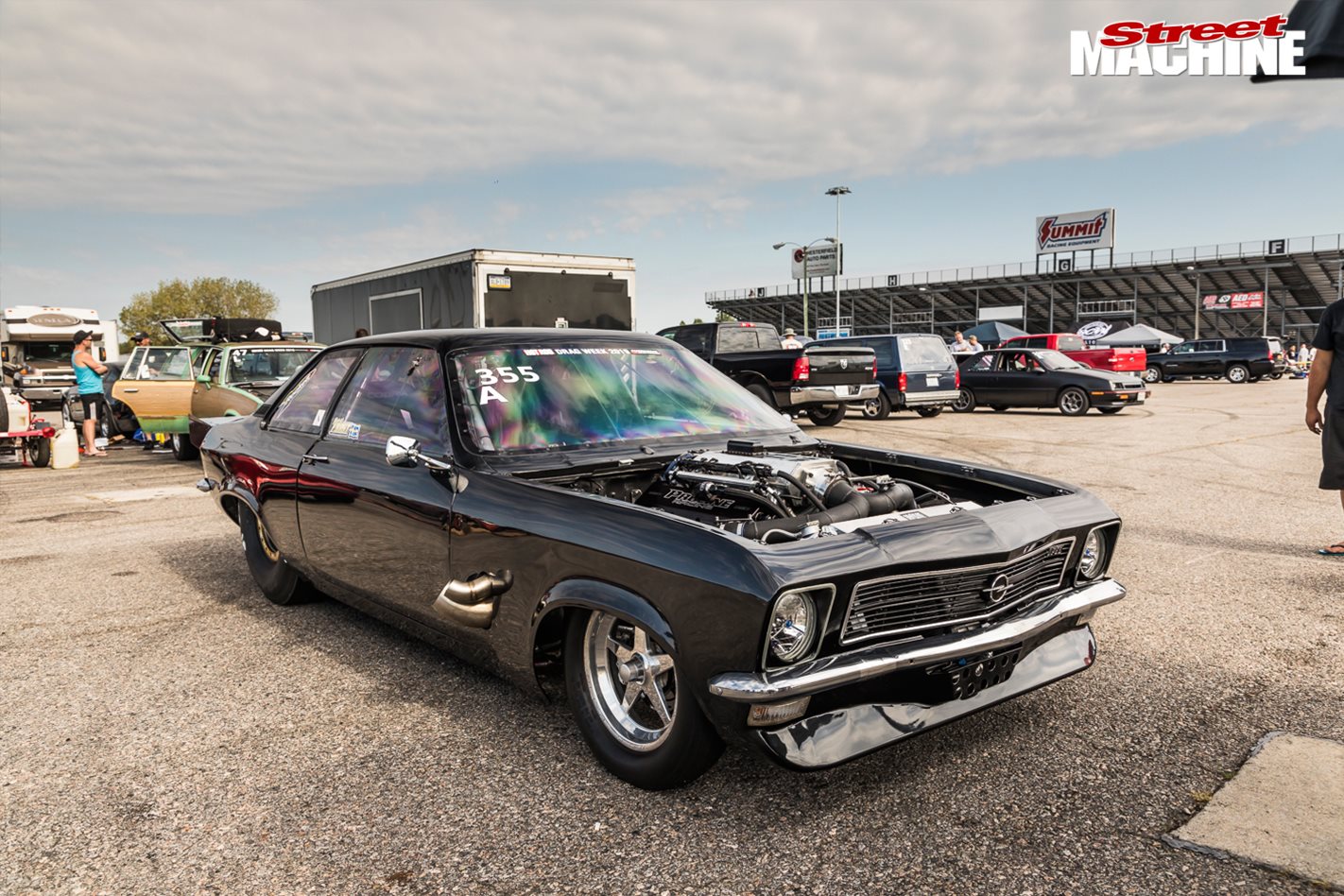 There is a plethora of Swedes at Drag Week 2019, but it’s fair to say Magnus Frost and his ’74 Opel Ascona are going to be the quickest. Hell, they may even be in with a shot at the Overall win. Magnus and his best mate and co-driver Dennis Klangebo built the car for Drag Week last year, but didn’t get it ready in time to ship over.

“We are young guys and we want to do it on a budget,” Magnus said. “So we found an old Pro Mod car back home – a 1994 Monte Carlo – and we ripped the body off and then got three Ascona bodies and built it as one, because it is widened and stretched everywhere.”

Powered by a 540-cube Pro Line Head Hunter motor with twin 88mm turbos, backed by a Mark Micke Turbo 400 two-speed trans and 9.5-inch diff, it’s perfectly capable of running in the mid-sixes. “If we could do a six-second pass every day and finish the week, that would be f**king awesome,” said Magnus. 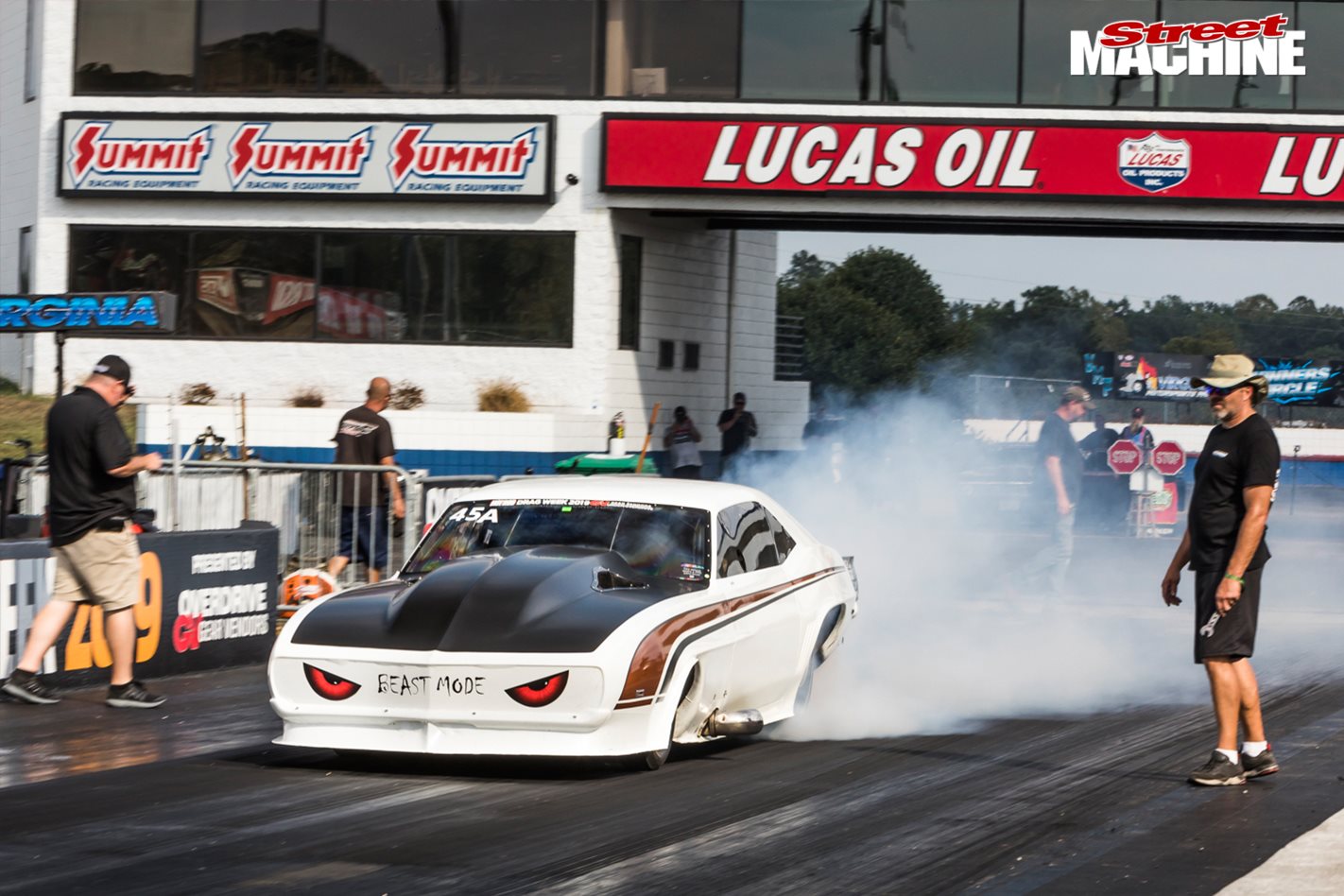 Tom pulled the ’chutes early during his best test ’n’ tune run on Sunday, but still managed a more-than-respectable 6.71@142mph. Tom, who hails from Lake Orion, Michigan, is the man to beat in the Unlimited class and Overall, having won the whole shebang three times previous in either one Camaro or the other. 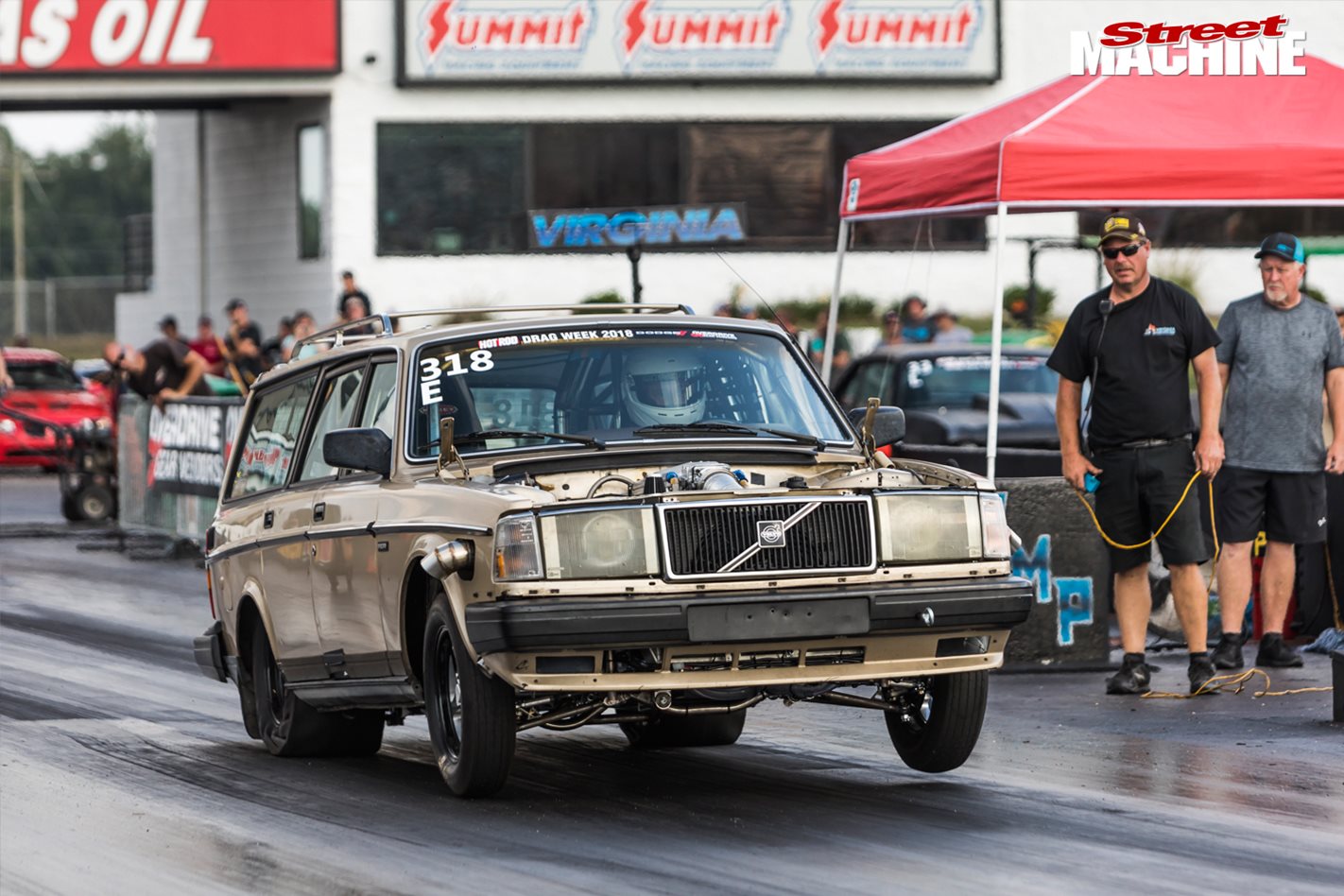 We didn’t get a chance to catch up with expat Swede Michael Borggren to talk about the new twin-turbo set-up in his Volvo 240 wagon, but rest assured we will at our first opportunity!