HOT ROD Drag Week is the biggest event of its kind in the world. Selling out four-hundred entries in just six minutes is a testament to how popular the event is, and this year we have more Aussie teams than ever before ready to take on the ultimate streetcar torture test.

And for many the going has already been tough. Street Machine’s own Mark Arblaster is here with his turbo LS-powered Valiant and has spent the last couple of days ironing out bugs with the race car and doing his best to keep the thing from falling off its tow dolly for the drive to the start line. Three cars are also still stuck at US customs – Jamie Farmer’s Falcon ute, Ben Paganoni’s FPV F6 and Tanya Thompson’s VH Commodore. The engine? That belongs to Robbie Abbot and was destined to be slid into Robbie Abbott’s 1983 Chev Malibu wagon dubbed Malibu Stacey. This year might be more torturous than most with the event starting and finishing at Atlanta Dragway where the humidity is off the charts. There’s a reason they call it Hot-lanta. The temps are generally in the high 20s or low 30s, but the humidity was around 93% today and that’s the real killer. It feels more like 40 degrees Celsius and everyone was soaked in sweat. A heavy shower swung through around 4pm and dampened moods even further – this is going to be a loooong week. 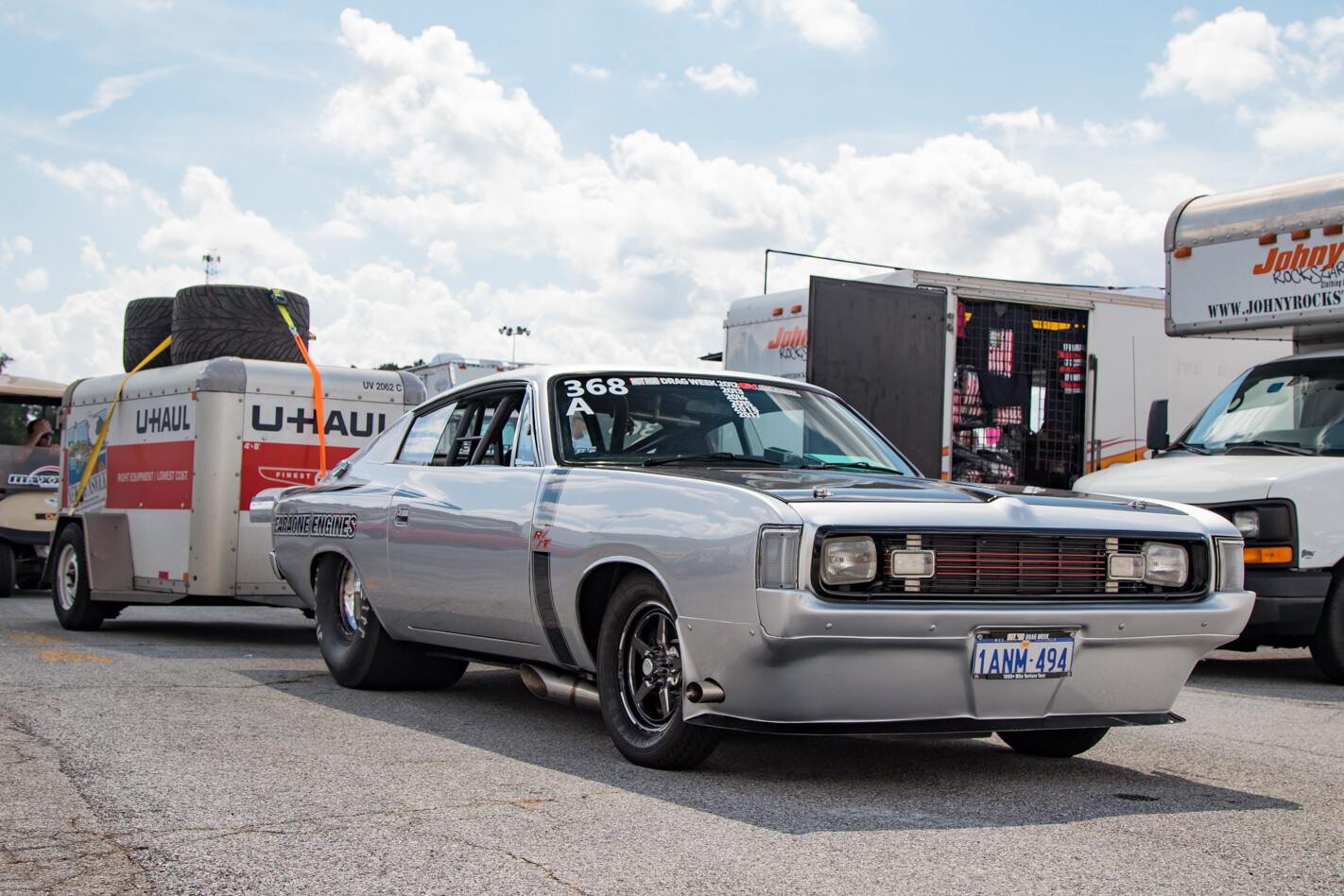 John Faraone is back to take his seventh crack at Drag Week. The Aussie Charger has run some serious numbers in the last 12 months with a best of 7.22 and 201mph on two separate passes. The potential is there to put the car into the Top Five of all cars at Drag Week, and at that end of the field anything can happen with attrition always wreaking havoc on the front runners. A broken Jesel belt drive on the 7.22 run back in Perth meant that John had some work to do before he shipped the car back to the ‘States, but he seems confident this year. “I just want to have some fun; we’ll see how it feels after the first couple passes,” John said. “I don’t want to have to work on it too much if I can help it.” 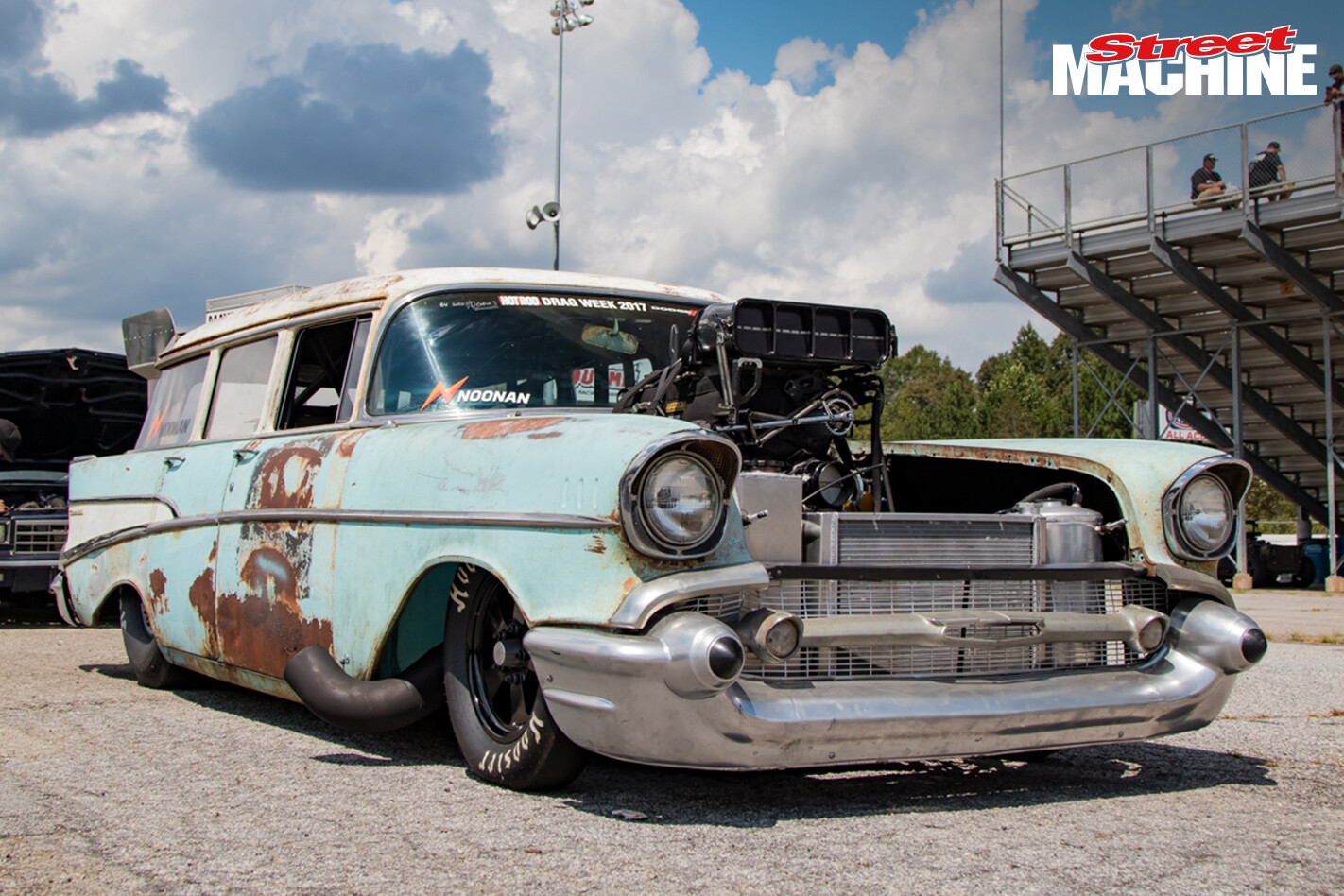 Richie Crampton made a massive splash with fellow racer, and former NHRA Top Alcohol Champion Jonnie Lindberg, showing up with the rat-rod ’57 Chev wagon packing some serious firepower. Richie has ditched the old twin turbo LS combo and fitted a 521ci Noonan billet water jacketed Hemi topped with a Top Alcohol screw supercharger and hat. Now we know you’re curious as to how they expect to drive a Top Alcohol engine 1000 miles, and so were we. Arby is a Drag Week veteran and he used that experience to good effect by getting out to the track before 5am this morning so he could be one of the first in line for scrutineering and registration. If that seems a little early think of the alternative; turn up at 8am and you’re at the end of a very long line and you’ll be pushing your car forward one car length at a time for the next six hours or more. Once he was through scrutineering, Arby got down to the business of making a pass but the big Valiant is struggling to get down. Mark only had a couple runs and neither was great with the final run seeing the serpentine belt coming adrift and the engine overheating and dumping its water in the breaking area. 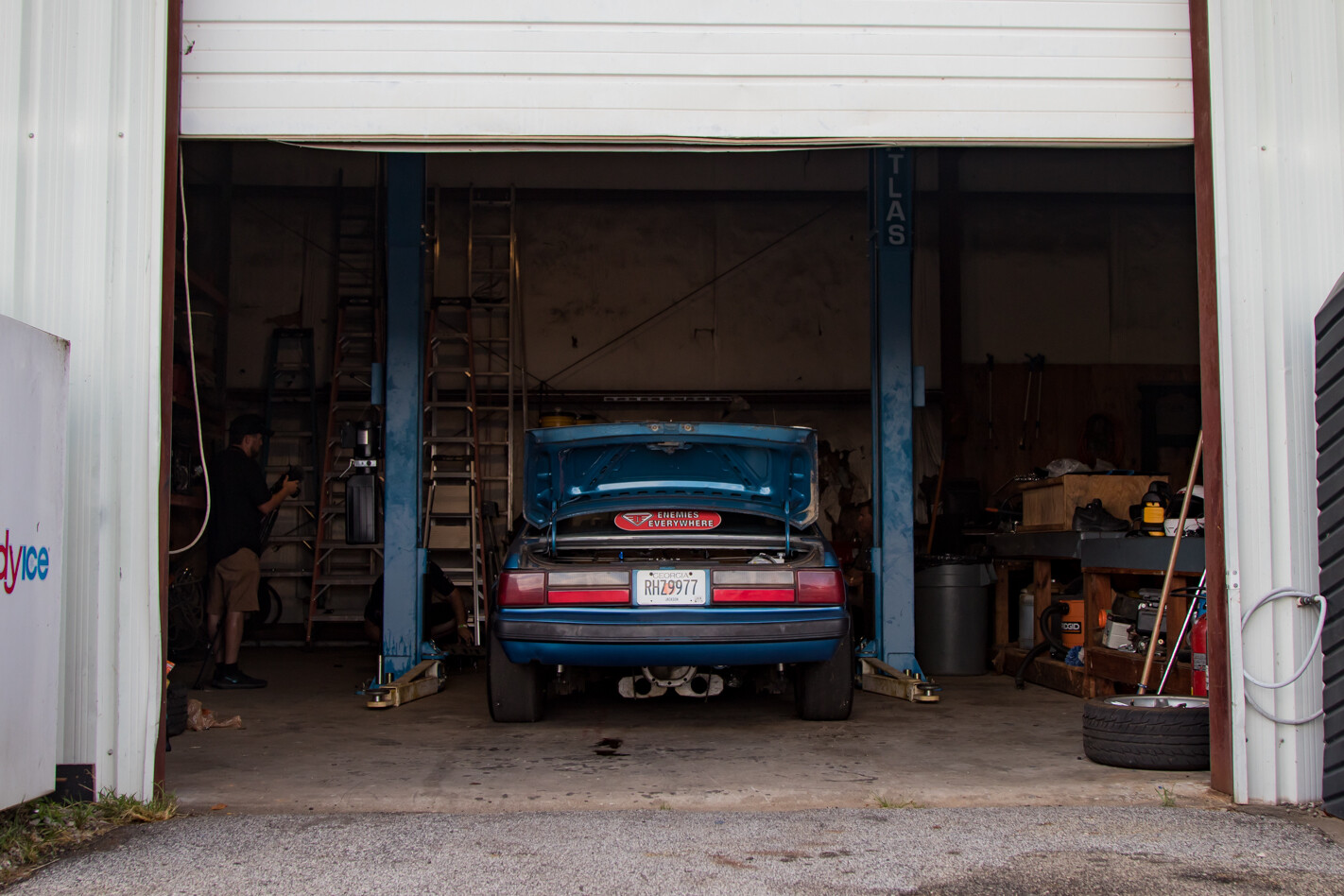 Jamie Farmer also managed to get through registration early and they made a few passes with the new Mustang they bought when Jamie’s Falcon found itself trapped on the Charleston docks. Yesterday they suspected an issue with a roller lifter and today confirmed it with the guys having to pull the intake and replace a pair of roller lifters in the little 302 Windsor, but that wasn’t the end of their problems. One of the needle rollers from the roller lifter found its way to the oil pump and set off a cascade of issues which resulted in shearing the oil pump drive. This meant the guys had to drop the sump and find another oil pump and oil pump drive. Jamie’s main man Kevin has been getting quite the workout under the new Mustang, fixing every problem as it pops up. We’re confident the guys will be there at the end of the week. Harry’s Chevelle also had issues. The car has been sitting idle all year and a few problems have popped up. During winter the freeze plugs pushed out of the block and that’s caused a couple headaches and then the guys discovered today that a couple of the fuel injectors were faulty, so the call went out for replacements. They’ve got it sorted now, but Terry Seng and the guys have been pulling their collective hair out all day. Brian Jensen has been going through the Torana hatch for the past week, fixing everything from crook injectors and stuffed valves through to a dodgy starter motor. Preliminary testing at Ozark Dragway showed that the car was a little off song but a solid pass today at Atlanta saw them back in the mid-nines with a 9.57 at 140mph. Ross and Brenton Gault planned to do some testing in their new ’55 Chev near Fort Worth Texas but poor weather conditions meant they’ve arrived in Atlanta with almost zero miles under their belt. The guys were towards the back end of the registration line and that killed their chances of getting any testing done today so tomorrow they’ll be hitting the track with an untested car. This isn’t their first crack at Drag Week however, so we’re confident the guys can lay down some good solid numbers with the old ‘shoebox’ Chevy. 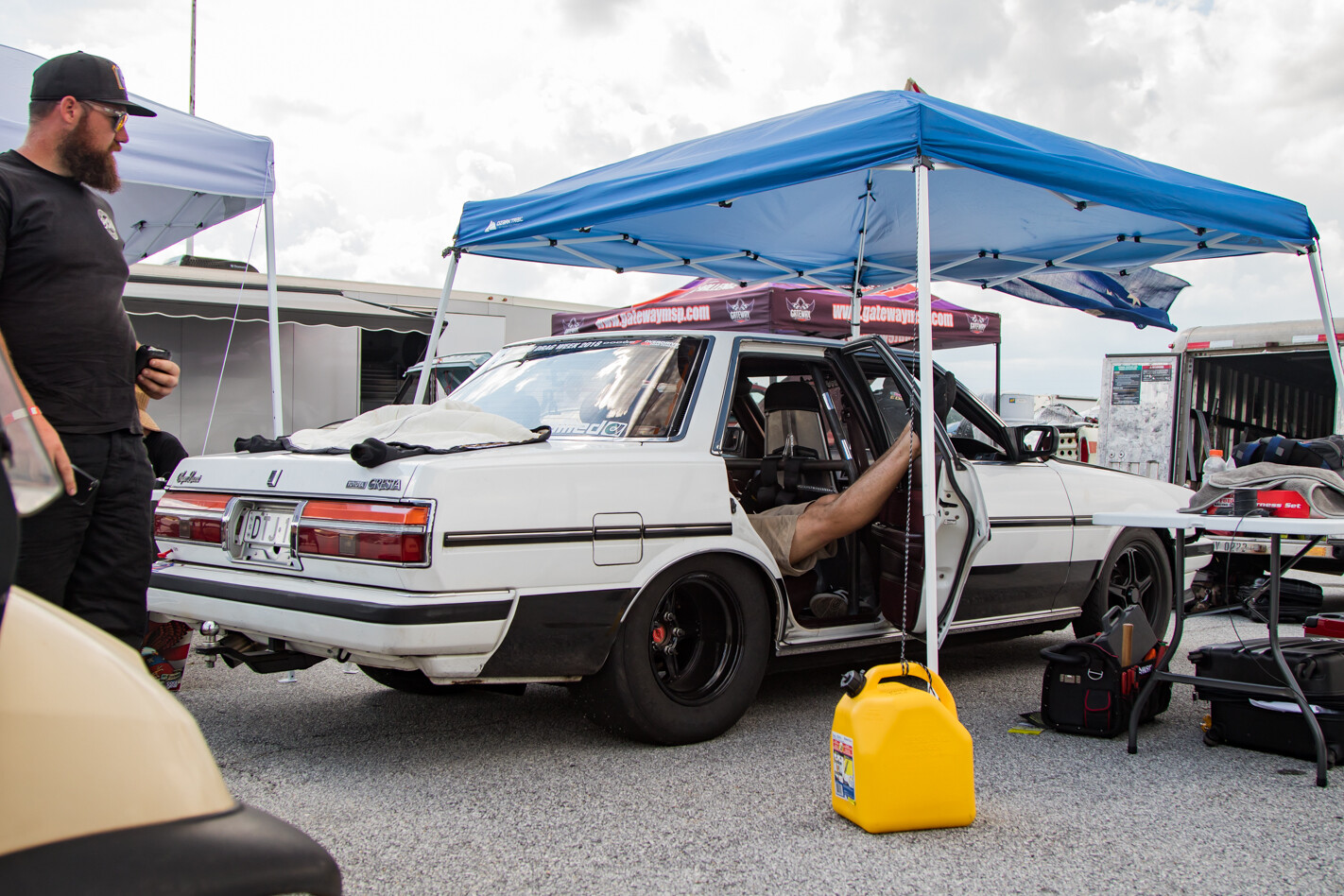 Ben, Alan and Woody from Mighty Cars Mods have the Barra-powered Toyota Cresta at Drag week and the guys having been getting a few runs under their belts. The car has been getting a fair amount of attention with most questions about the engine; the Americans are pretty keen to know more about the Barra six. “There’s been bulk interest,” Benny says, “It’s right hand drive with a non-US body style and an engine they never got.” On Friday Benny managed to run a 9.89 at 142mph with a pretty slow 1.6sec 60-foot time, and today’s testing saw them sneak down into the 9.7sec zone, but they’re still a fair way from their goal. The guys are hoping to put the car into the eights this week; the Cresta has gone 9.1 at Sydney Dragway. 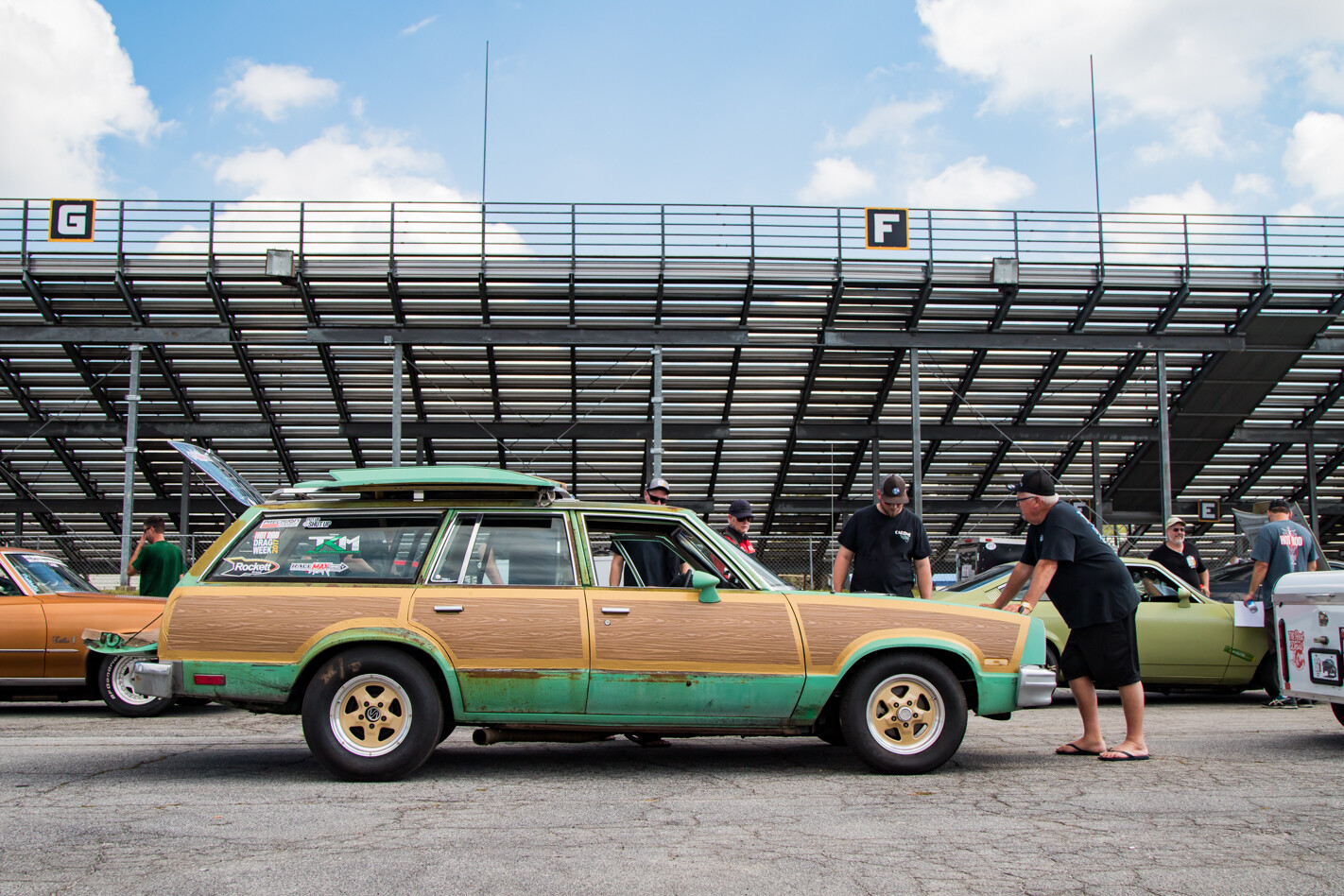 Robbie Abbott and the guys with the Week Wagon, which has been re-named Malibu Stacey, have had a hard slog. Harry and Robbie bought the wagon last year minus the engine, and Robbie built a stout 800hp big block to drop between the front rails but that engine is stuck inside a shipping container and so they managed to get a borrowed 396 for the car. While they were waiting for the engine the guys had to fit the tough Powerglide so they could mount the Gear Vendors and get the tailshaft shortened. All the while hoping that the positioning would be right for when an engine finally arrived. The car arrived with a brand new look at registration today with some gaffa tape and a bit of woodgrain vinyl giving the car some woody styling. It looks very reminiscent of the Griswald’s family truckster. “Not having our own engine is a bit of a step back, but we’re still here,” Robbie says with a smile on his face.

So we’ve got nine starters with the Aussie crew and some potentially quick cars, but there have been plenty of problems too. Despite all that all the Aussies have smiles on their faces, after all it’s not Drag Week without a few problems.  It’s definitely going to be a very interesting week. Stay tuned for all the action as it happens.