IN 2019 Steven Winningham from Byron, Georgia competed in Hot Rod Drag Week for the second time in his ’81 Fox-body Mustang. The motor is an all-aluminium LS-based 5.3-litre truck block that has been re-sleeved, bored and stroked to add up to 447 cubes, backed by a G-Force GF5R clutch-assisted five-speed with a Gear Vendors, and an 8.8-inch diff with 4.3:1 gears. Here’s his first-hand account of his journey through Drag Week 2019.

MY FIRST goal for Hot Rod Drag Week 2019 was to complete the week without any major mechanical or electrical issues, but my secondary goal was an 8.99 ET. However, I knew everything would have to be right and all the stars aligned for that to happen. Since there was a good chance the air was going to be better than the 3500-foot density altitude (DA) we have in the south, it seemed my biggest obstacle was going to be the 60-foot. The car consistently 60s in the 1.28-1.30-second range, but should be capable of consistent 1.24s or a little better. 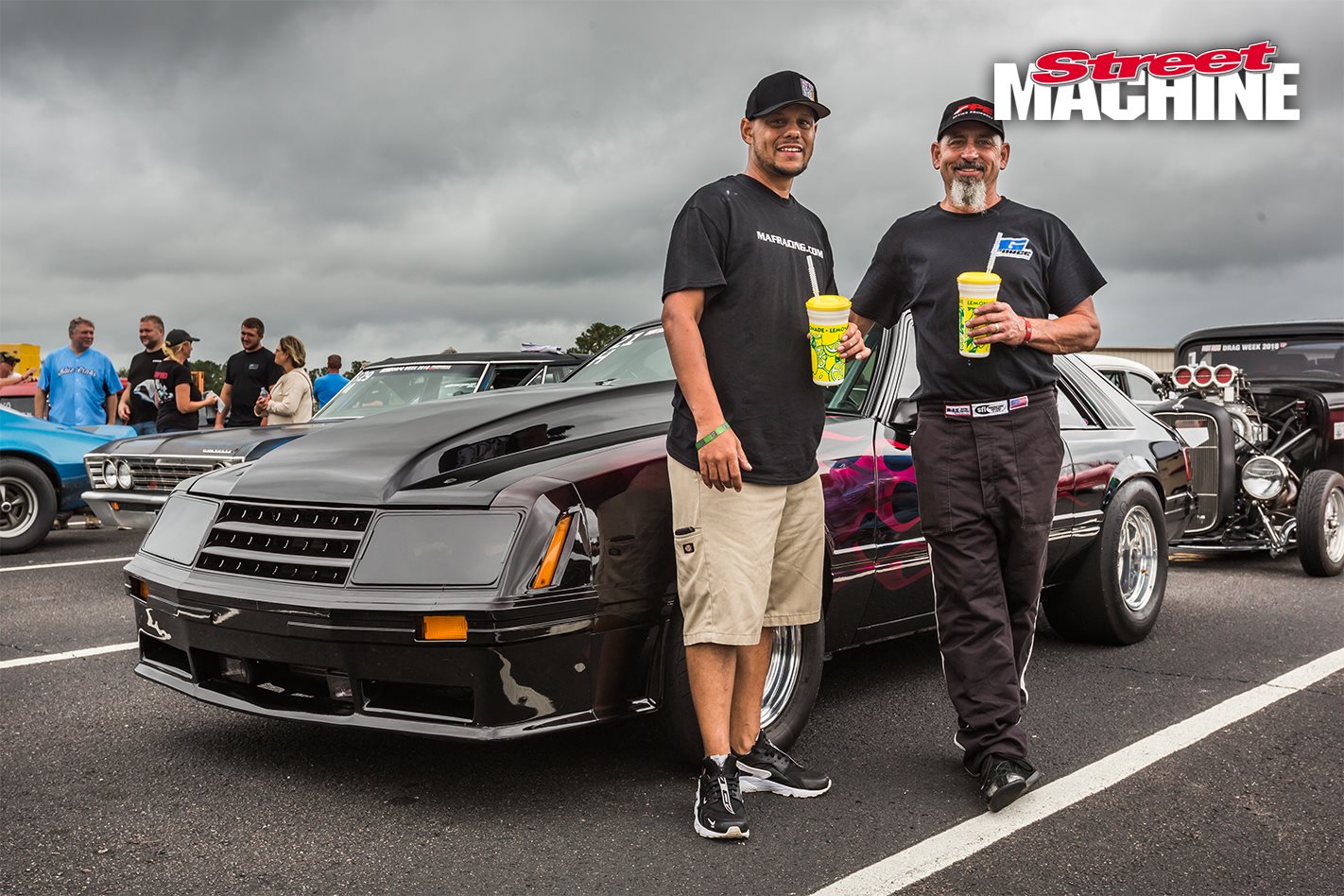 I went into each day checking the DA and trying to focus on the 60-foot, which for the first few days of Drag Week was staying around 1.30, but a couple of hits had netted 1.28-1.29, so I was optimistic every time I pulled up to the line.

Then Thursday came. Maryland International Raceway. Coming into the day’s racing, our three-day average was 9.16@150mph. We got the car ready and in the lanes early. The air was good. Everything was right – until I pre-staged the car and set the line lock. I pumped the brake pedal too hard, and when I started to push in to stage, the car didn’t want to move. So instead of releasing the button and starting over, which would have been the smart thing to do, I continued to ride the clutch and push the car forward. When I finally lit the stage bulb and the tree came down, I dumped the clutch and the rpm flared but the car hardly moved. I had overheated the clutch and wasted a pass. 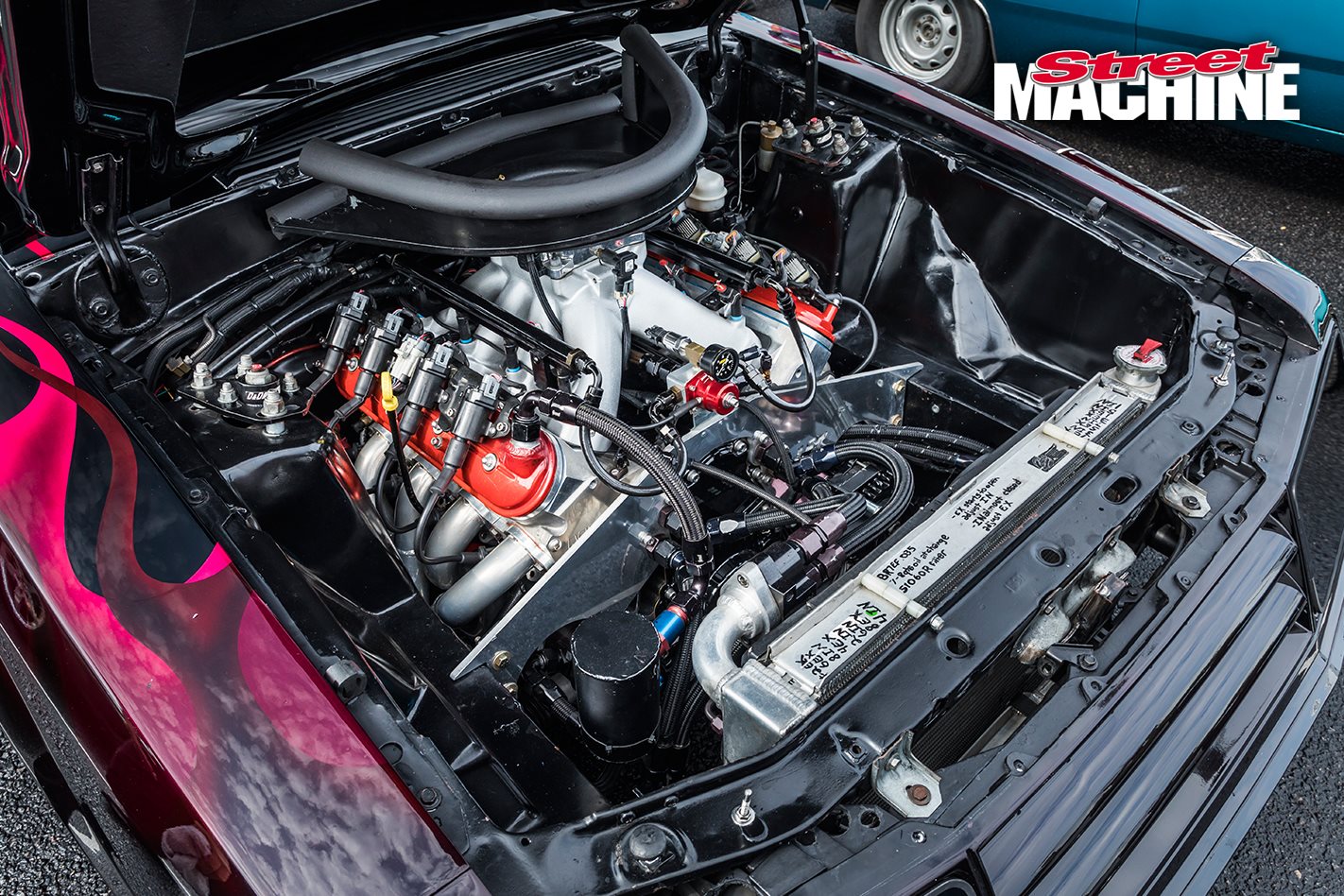 When I got back to our pit, I started making phone calls trying to figure out if it was possible for me to have completely wasted a clutch disc from one stupid mistake. My buddy Tim Flanders said he saw clutch dust come from under the car while watching the live feed. I knew that wasn’t good, so we put out a call from the tower for a clutch disc, but unfortunately that didn’t pan out.

After talking to my clutch guy in Missouri, we cooled the clutch for two hours, made some adjustments and went to the lanes for another try. With help from fellow Drag Week competitors, we pushed the car to the line and it mustered a 1.348 60-foot and a 9.44@146mph pass with the clutch slipping. That was the slip I handed in, and it hurt our average, which had been 9.16. 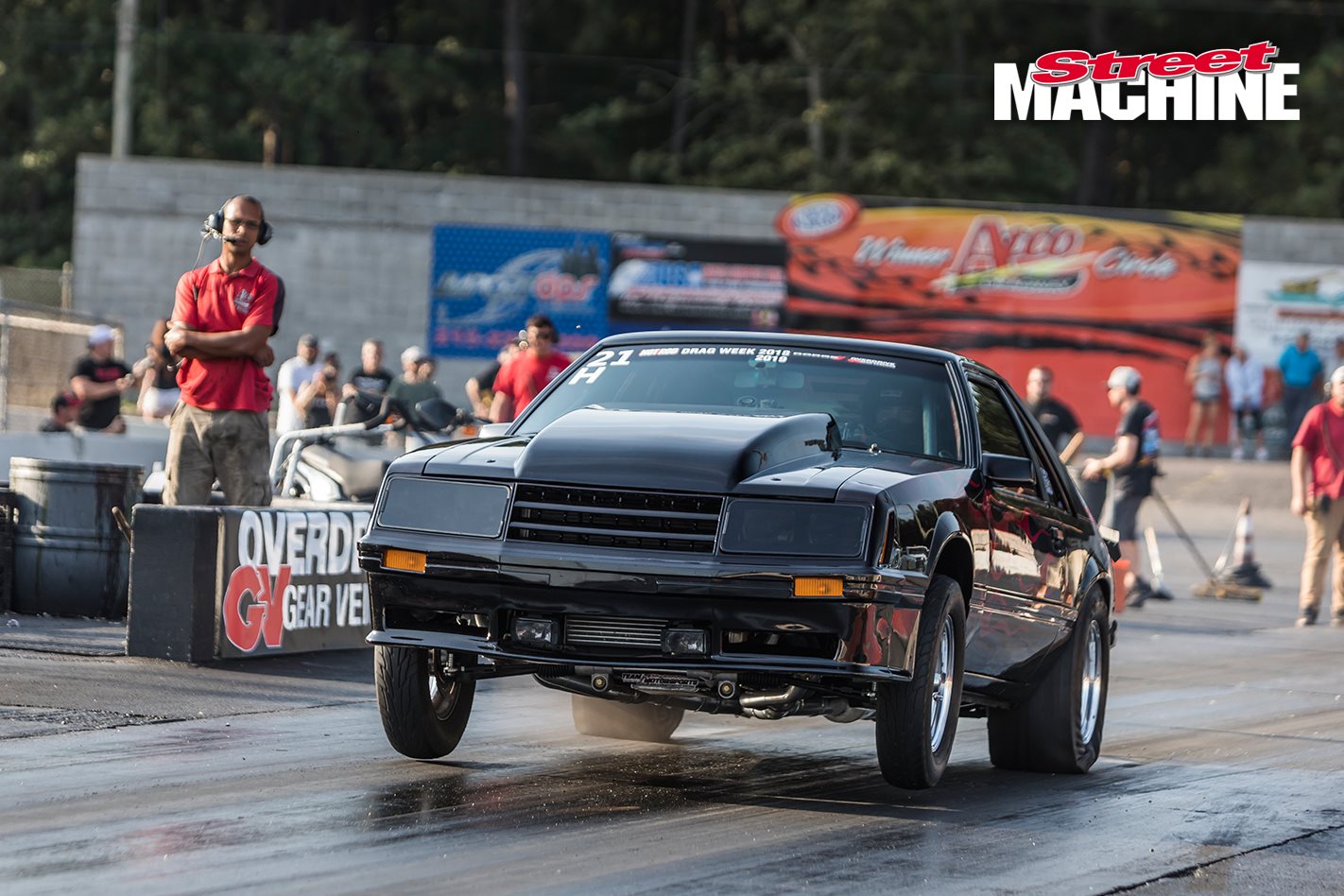 While we were turning the car around for the drive, I was on the phone with my clutch guy. He was ready to ship me a new disc if I wanted it. I said: “No, I think this one will make it,” and we hit the road for Virginia.

After driving for a while and doing some deep thinking, I handed my phone to my crew chief, Anthony, and told him to get us a clutch disc after all. Cale and Tinzy Aronson of Black Magic Clutches immediately got it packaged and in the air. Anthony also put out a call on the Drag Week Facebook page for a transmission jack, which started a chain of people attempting to help us. Matt Culpepper, a fellow Drag Week participant and Fox-body enthusiast, said he would try to scrounge one up. I also asked Matt if he had a digital caliper, because I knew I needed one to set up the new clutch. 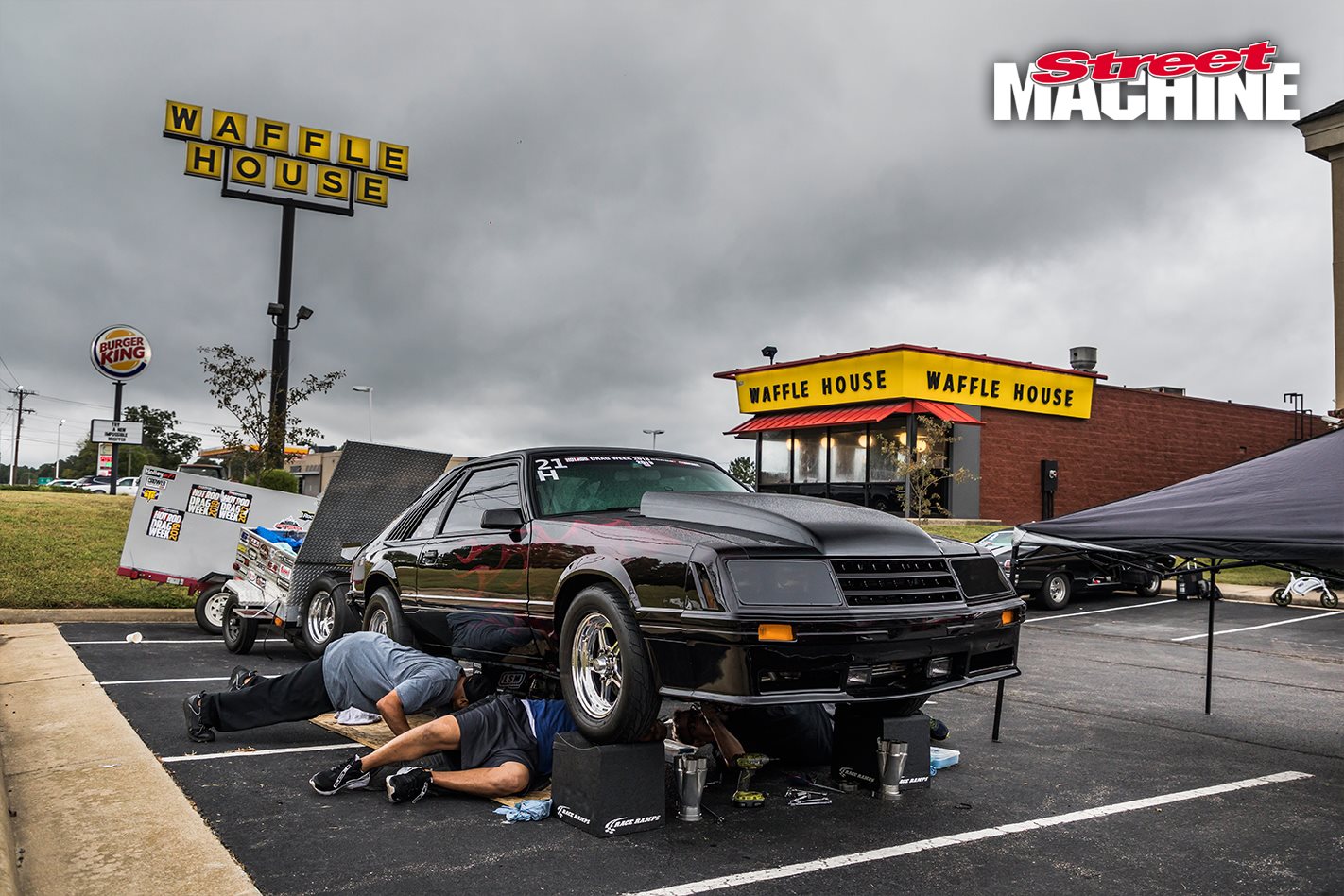 We arrived at the Holiday Inn Express at 4pm and started thrashing on the car to get the transmission and clutch out. I am used to working alone, and this would normally be a two- or three-day job, but with Anthony busting out work I was amazed how quickly we got to the point where we were ready to pull the trans out. Two guys from DBR Racing came over and helped us manhandle the transmission with Gear Vendors overdrive out and onto the ground. It was a great team effort, and I really appreciated the help. Also, Jim Moore – maroon ’57 Chevrolet pilot – insisted we hold on to his very nice LED work lights so we could use them the next morning while putting things back together. When Matt arrived he handed me a new, still-packaged digital caliper that he had bought for me. Such a great guy!

Friday morning came – the final day of Drag Week 2019 – and we had been notified the class cars were scheduled to run at 11am, so we had our work cut out for us to get there on time. The clutch disc was delivered to the hotel at 8:10am and we were under the car by 8:15. 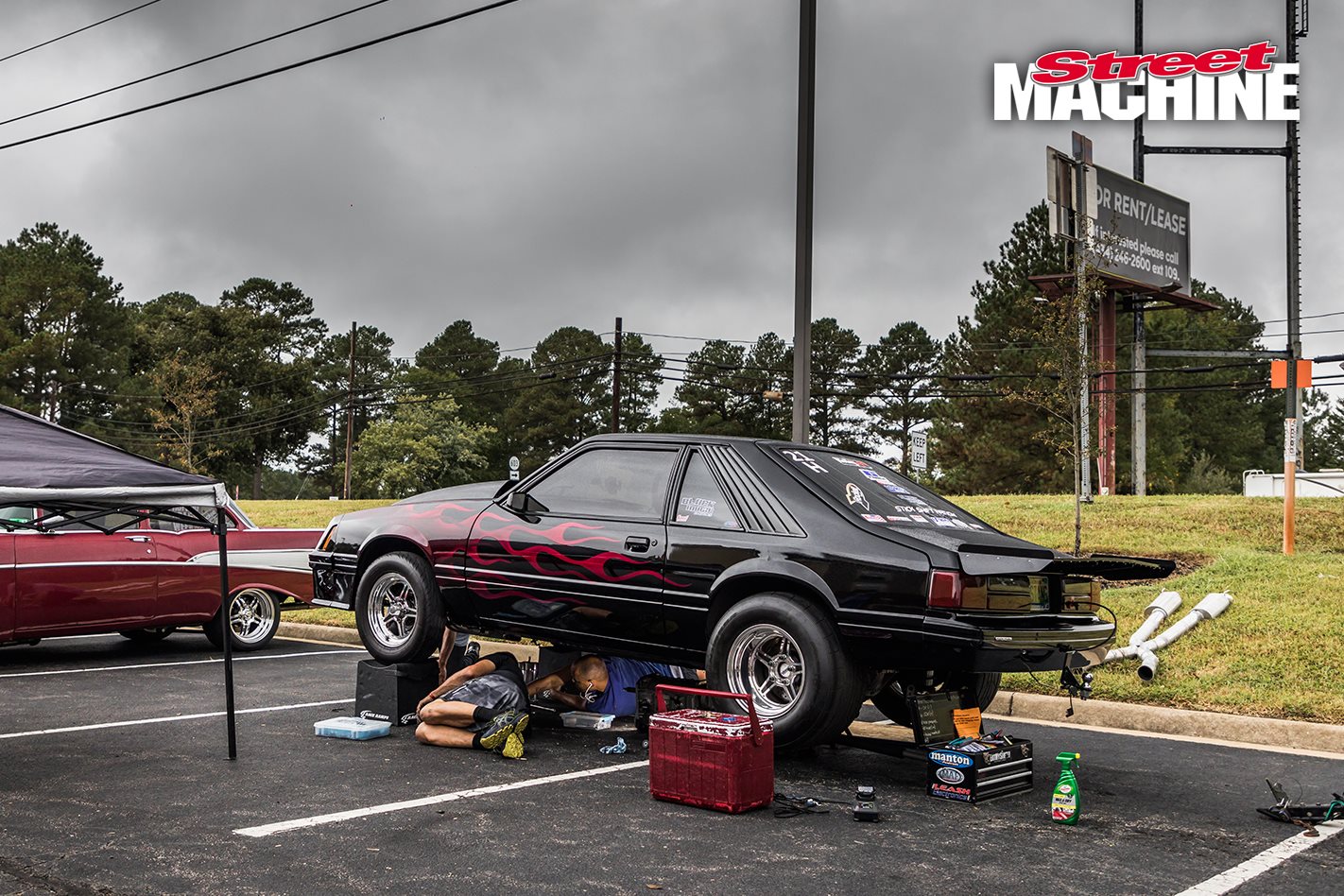 By 11:30 the clutch and transmission were back in the Mustang, so with the trailer connected we were finally ready to head to the track. We decided to set the clutch up in race mode and roll to the track on the slicks so we could quickly get in line.

Apparently we were not the only ones with that plan. We ended up in staging lane two, but there were five lanes before they were to run ours. Then the rain came. It had rained at Virginia Motorsports Park on Monday at least twice. Now, back in Virginia, it was raining on Friday. 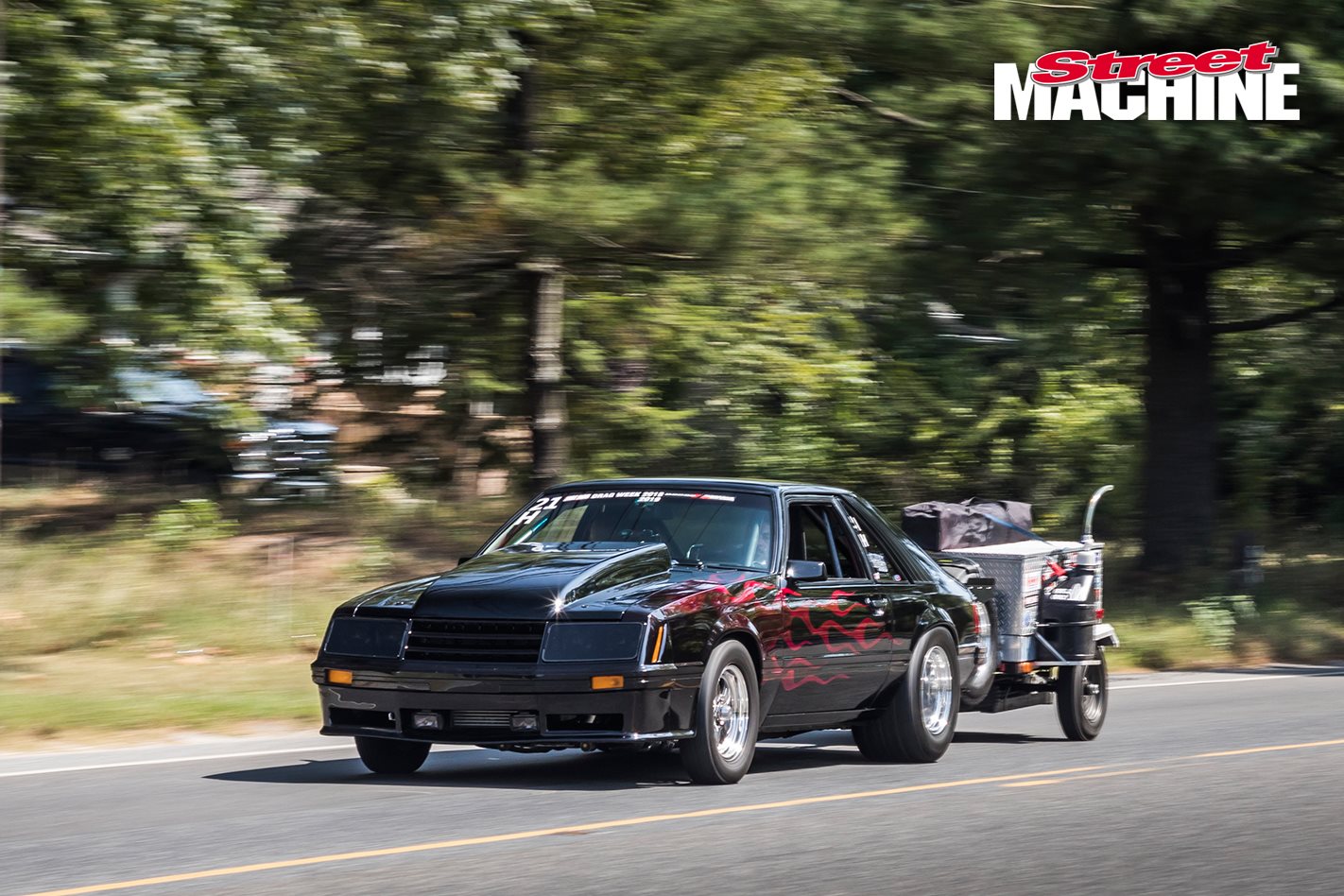 After the rain delay, I got one final pass in to end Drag Week 2019. The clutch was new and the counterweight ended up being too light, so the clutch didn’t lock up as it should have. I didn’t think it was a good pass, but to my surprise, it ran 9.12@150mph, which tied with our quickest ET for the week! If the clutch had been right, that would have been the best pass ever – maybe a 9.0@152mph or better!

When I crossed the 1320-foot mark and started slowing, I heard and felt something that didn’t feel right – something grinding. I could feel it throughout the car. It turned out that sometime after I shifted into fifth, the 5/R rod end stud came loose, hit the track and the rod wrapped up under the car. I made the turn onto the return road and when I downshifted to first gear the transmission locked up and the car came to an abrupt stop. This wasn’t good. 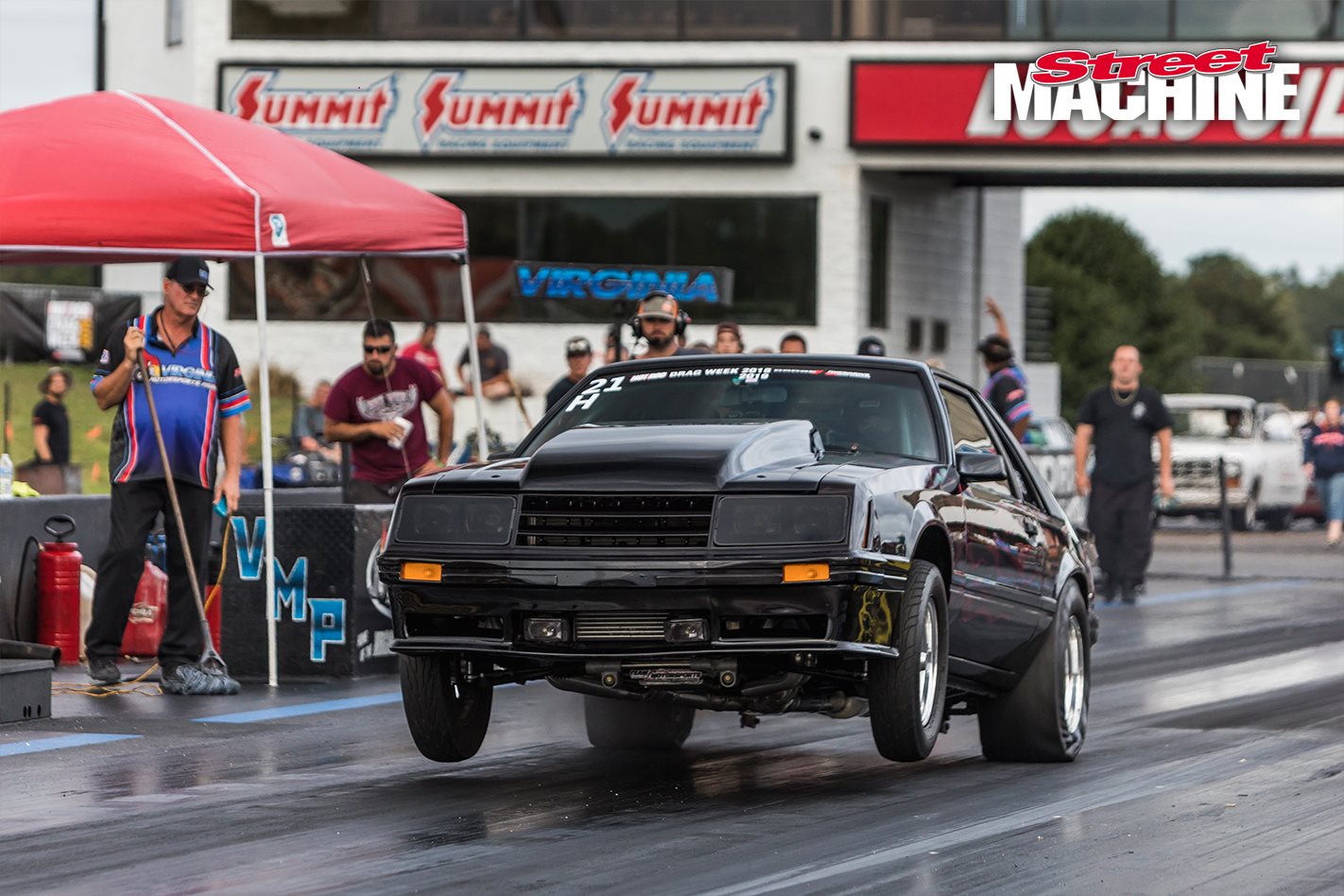 On Thursday when we had pulled the transmission, I had disconnected the shift rods and dropped the shifter out from under the car. The nuts on the rod end studs were staked in three spots and had a lot of red Loctite on the threads. Apparently the threads on the 5/R rod end stud were damaged just from taking the nut off. When we got the clutch and trans back in I thought it would be okay for a few more passes. Wrong! It didn’t make it through one full pass.

So we jacked the car up, knocked it out of fifth gear, zip-tied the shift rod up and drove the car to our pit. I then removed the rod completely. Anthony and Matt took the rod to a shop at the track and straightened it. The rod end that had been dragged on the track was destroyed. Fortunately, when Anthony and Matt returned with the straightened rod, one of Matt’s Drag Week buddies said: “I think I have one of those rod ends on my T-bird turbo coupe.” So now we had a replacement rod end, a straightened rod and a grade-eight bolt and nut, and using a stack of washers as a spacer, we bolted it all up. All of this took about 30 minutes, and Dave Freiburger was calling stick-shift cars to the staging lanes the entire time.

In the first round of the Stick-Shift Showdown I was paired up against a flat black Nova with a turbo 403 small-block Chev backed by a T56 Magnum. On that pass my reaction time was .056sec, which was my best ever, with a 1.25 60-foot and 5.93 660-foot, but the clutch was so tight the shifts were violent and the car turned towards the wall. I pedalled it twice, but still finished first.

That was it. No 8.99 timeslip for the SSSTANG and I lost the Stick-Shift Showdown for the second time. Still, we came second in the Super Street Big-Block Naturally Aspirated class, and looking at the bigger picture, we completed Hot Rod Drag Week 2019 and had a blast doing it with a group of outstanding people.