EVERY second year, the Charger Club of WA hosts the Everything Chrysler Day, and this year they chose the Perth Motorplex as the venue. There were plans to have drag racing as part of the festivities, but unfortunately the venue costs and insurance put paid to that. 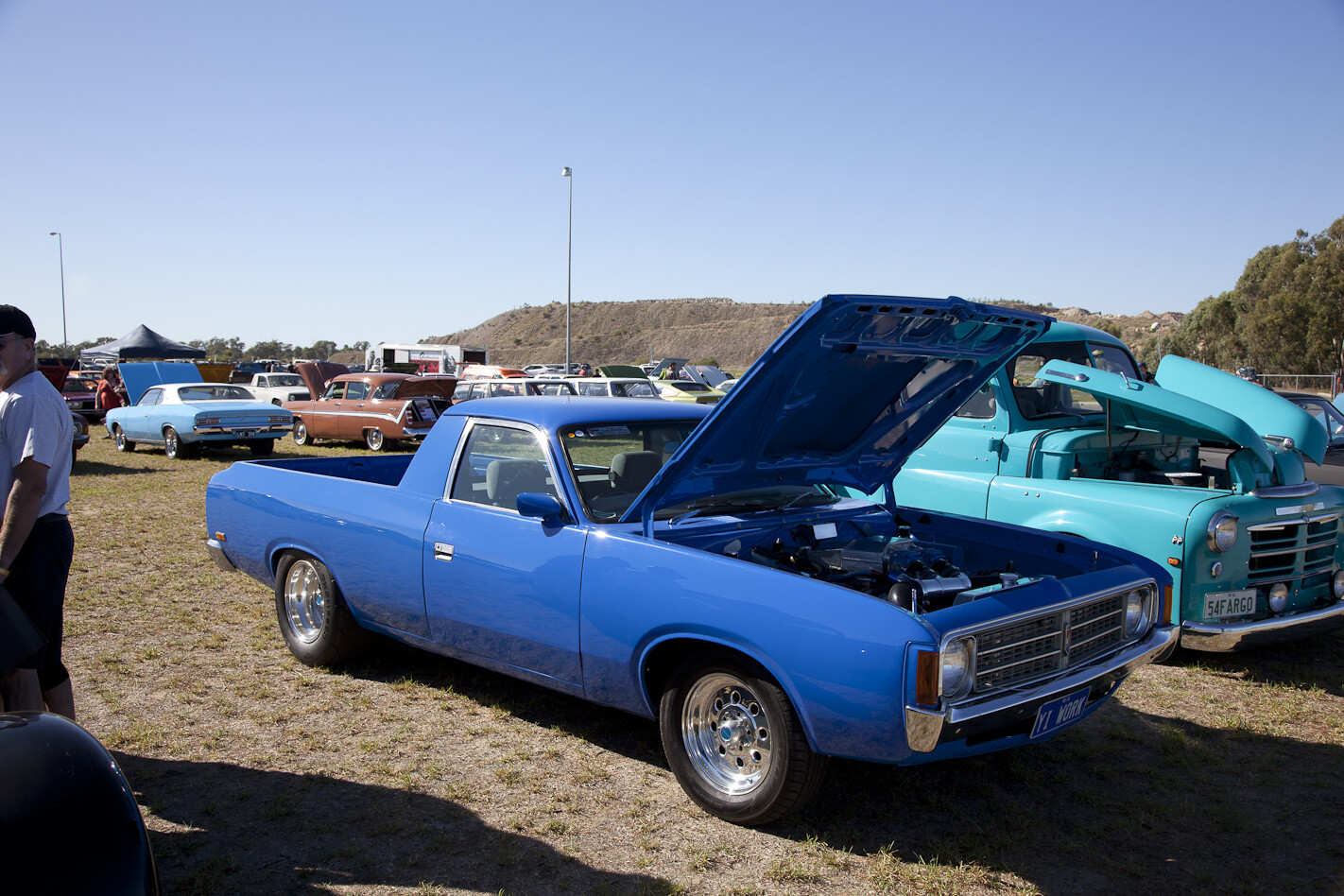 While most events I’ve attended at the Motorplex have been held in the pits area, the ECD utilised a grassed area and the parking lots at the main public entrance. There was ample room for the 160 or so cars that showed up, and while the grass looked a little bit worse for wear, the elevated location did catch a bit of breeze, although shade was hard to come by. 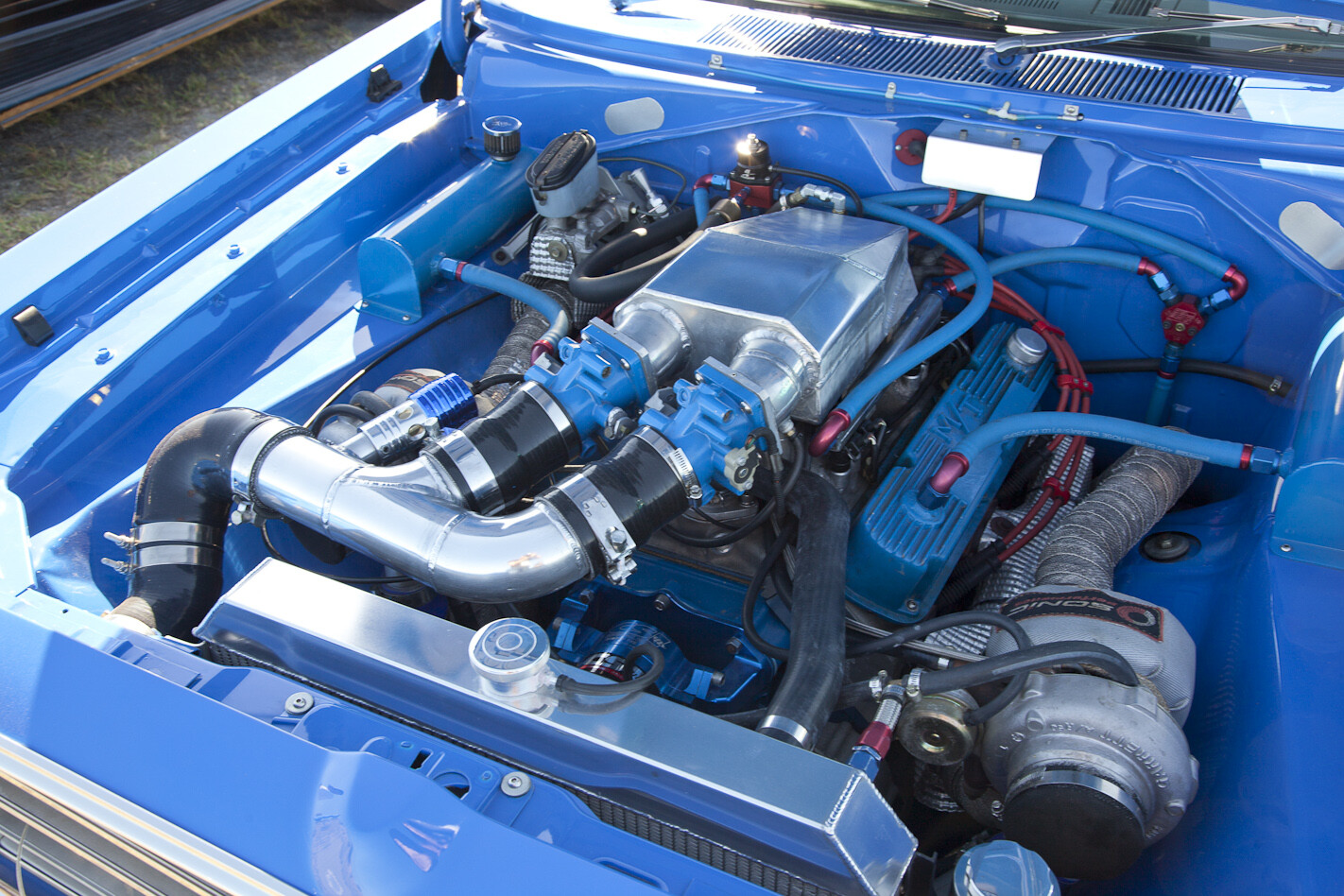 The Charger Club have to be commended for coming up with a pretty good format that meant you weren’t stuck in a deckchair looking at your car all day. There was a mini-cruise – which resulted in a little bit of spirited driving and some acts of controlled traction loss – as well as a Go-to-Whoa and a Gymkhana event.

There weren’t a huge number of entrants in the driving events, but it was interesting to watch the difference in the handling characteristics between a late-model Challenger and the 60s and 70s Mopars – think blue fin tuna versus floundering whale. 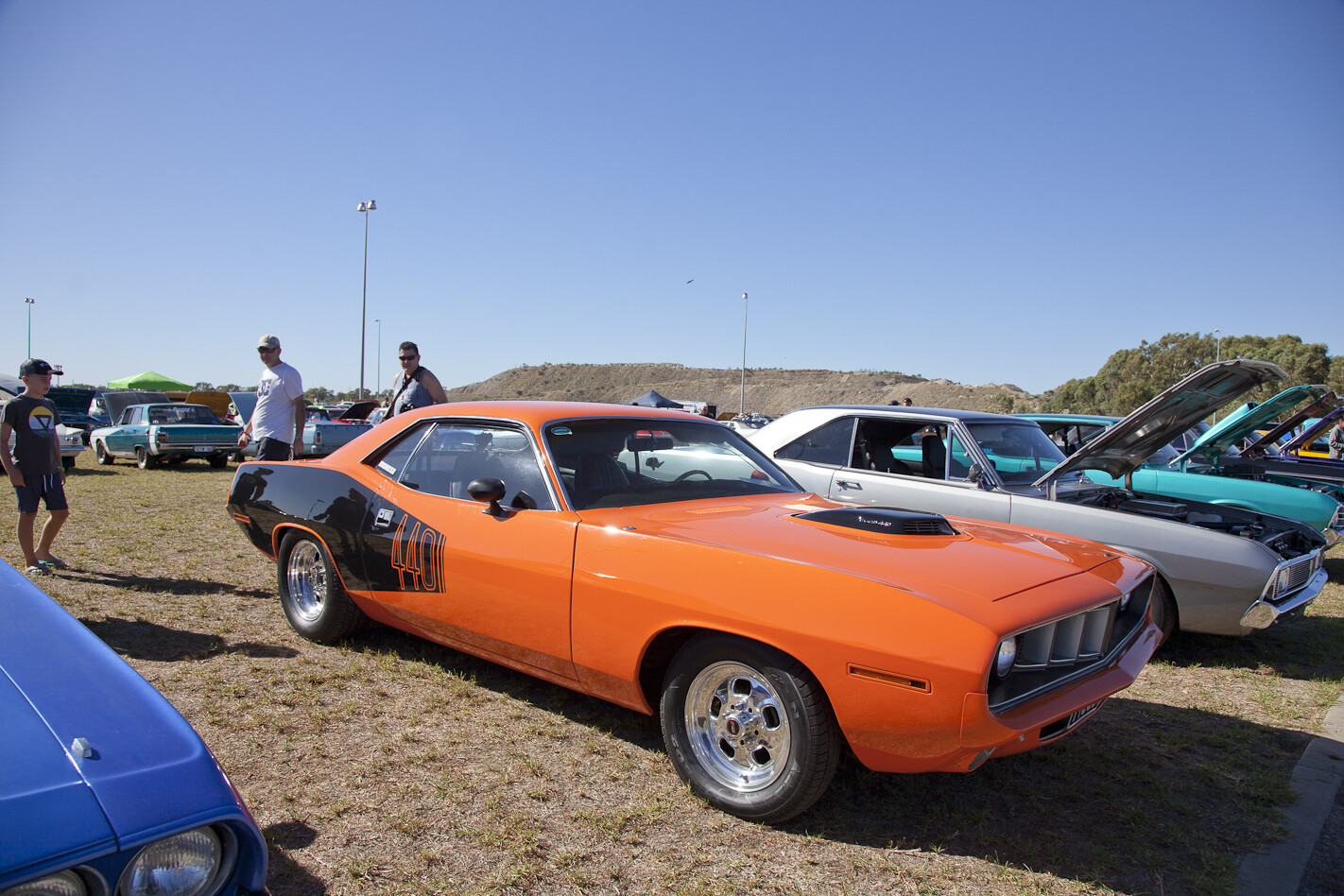 There was a huge variety of cars on display, with all branches of the Chrysler family tree present and correct – even Chrysler-powered cars such as Jensen Interceptors, Facel Vegas and Bristols (though I don’t recall seeing any of those at the show myself). Thanks to Chrysler purchasing AMC in the late 80s, Ramblers were also welcome, so a handful of Javelins, a couple of Americans – including mine – and a Rebel showed up. You don’t see too many of these around – they didn’t make very many of them – so it was great to see Rodney Kruger’s neat VJ coupe on display. It’s no slouch either, running mid-12s on street tyres. My mum had a VE Valiant when I was a kid; I still remembering melting circles into the vinyl seats with the cigarette lighter. It was also white with a slant six, but that’s about where the similarity ends with Clint Ward’s gorgeous example. He’s got the old 225 running on sausage fuel and it’s backed by a 904 Torqueflite. The interior has also been upgraded with a VIP bucket seat and console interior. David Short’s VG Regal is a pretty simple build that has been very nicely detailed. The two-tone blue/whitewall tyres are an interesting touch that I haven’t seen before, and the engine bay is light-on for flash but as neat as a pin. 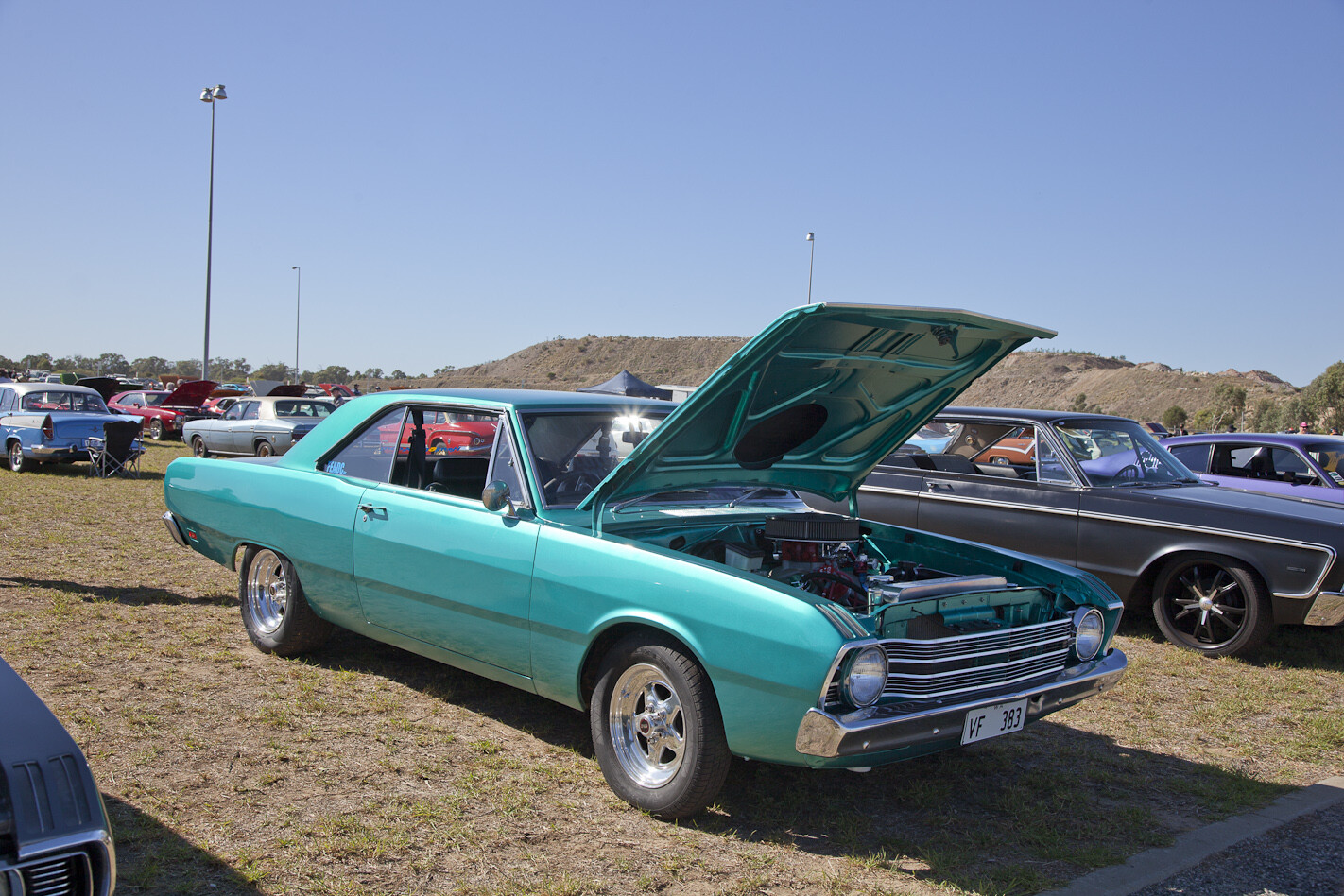 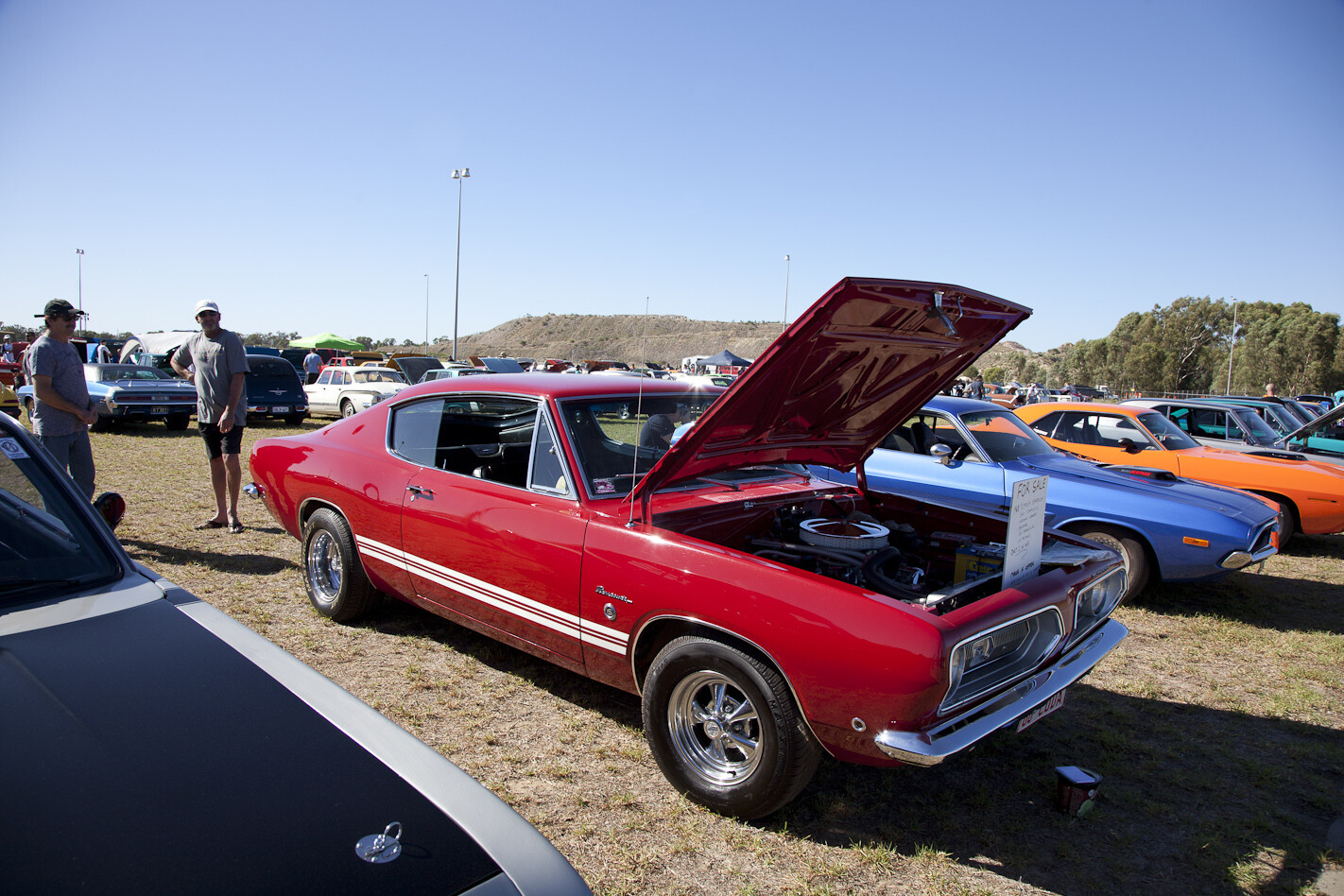 Apparently this ’68 Plymouth Barracuda 340 Formula S is the only one in the state. It was a matching-numbers car and the owner had it on the market, although in a novel twist, he was taking up offers like a silent auction. 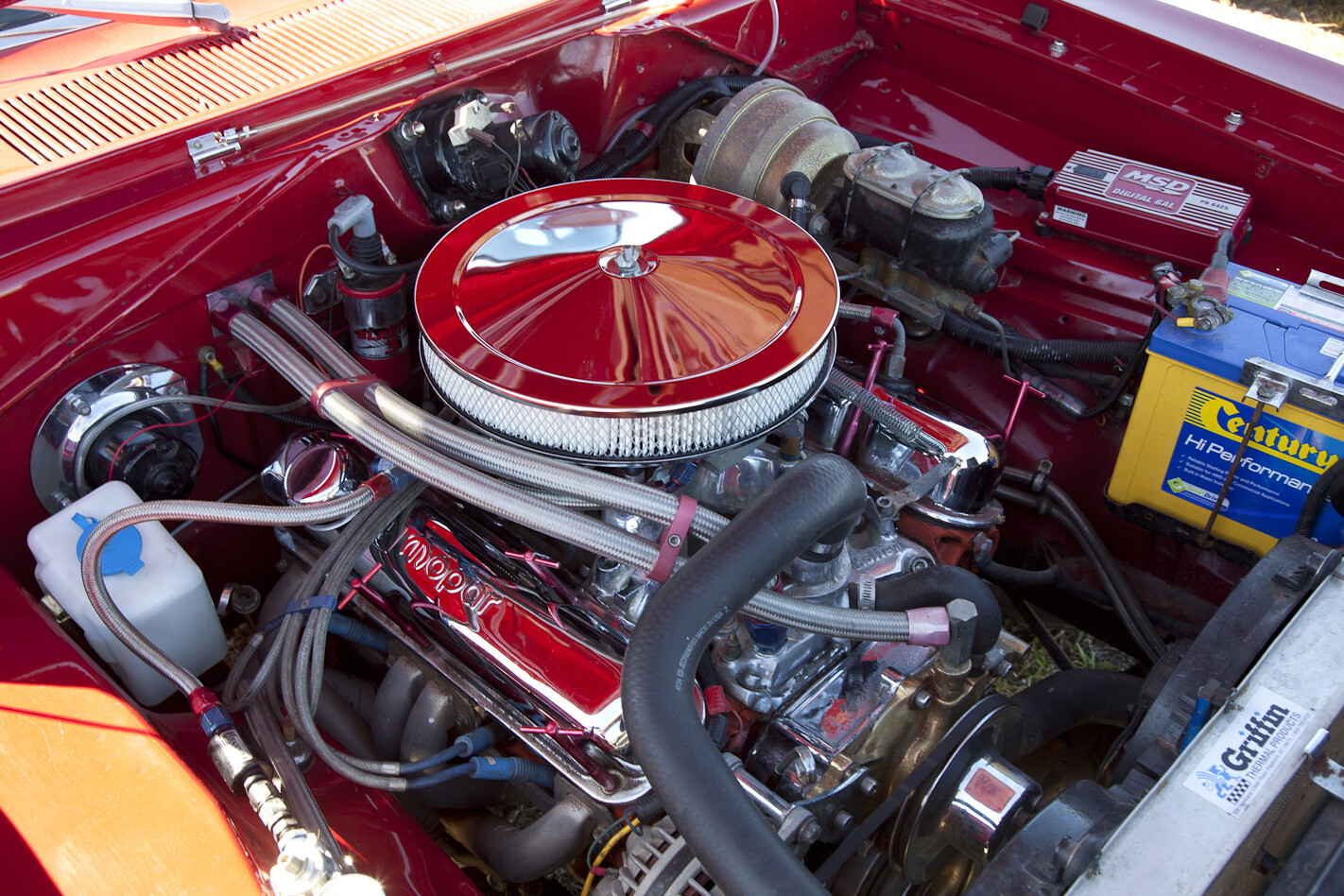 Potential owners could jot their offer on a piece of paper and drop it into the container. Not sure how that all worked out, but it was a pretty nice-looking car. There was plenty of killer stuff on display, but the car that really caught my eye was Fraser Massey’s VH Pacer sedan. Maybe it’s that great Aussie tradition of turning mundane four-door family cars into striped and stickered muscle cars that turns me on, but I really liked the combination of colour, stance and wheels – and redline tyres – and the basically stock but spotlessly clean engine bay. It just ticked all the boxes for me. 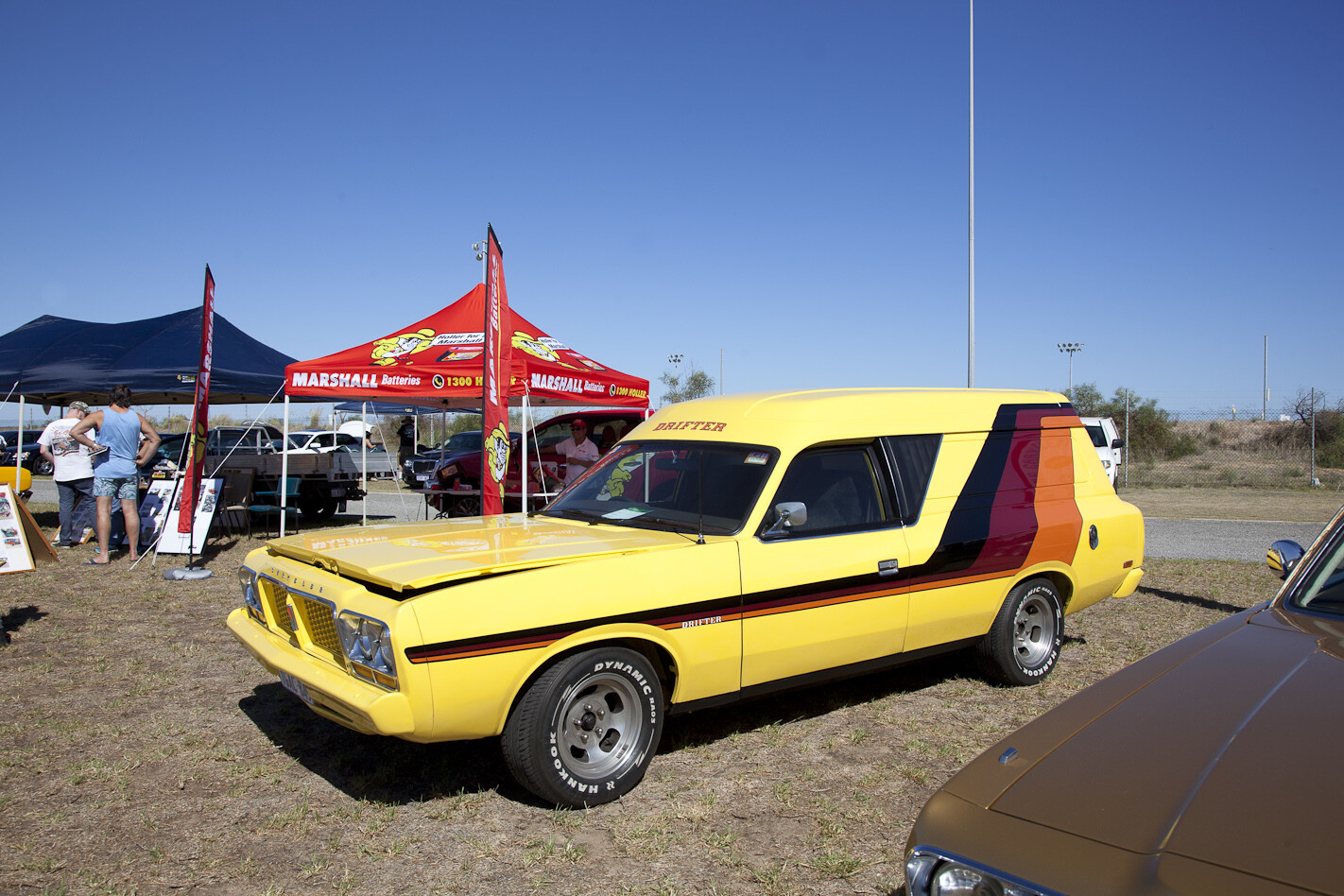 Here’s one just for Simon Major – no one can claim that Phill Anderson ‘wrecked a classic’ when they look at his factory-fresh Drifter panel van! Kim Belcastro’s CL Regal wagon has been in the family for 40 years but doesn’t look a day over 19. It’s had a couple of wheel changes lately, but I think Kim has nailed it with the current set of 17x7 and 17x8 Billet Specialties Street Lites. 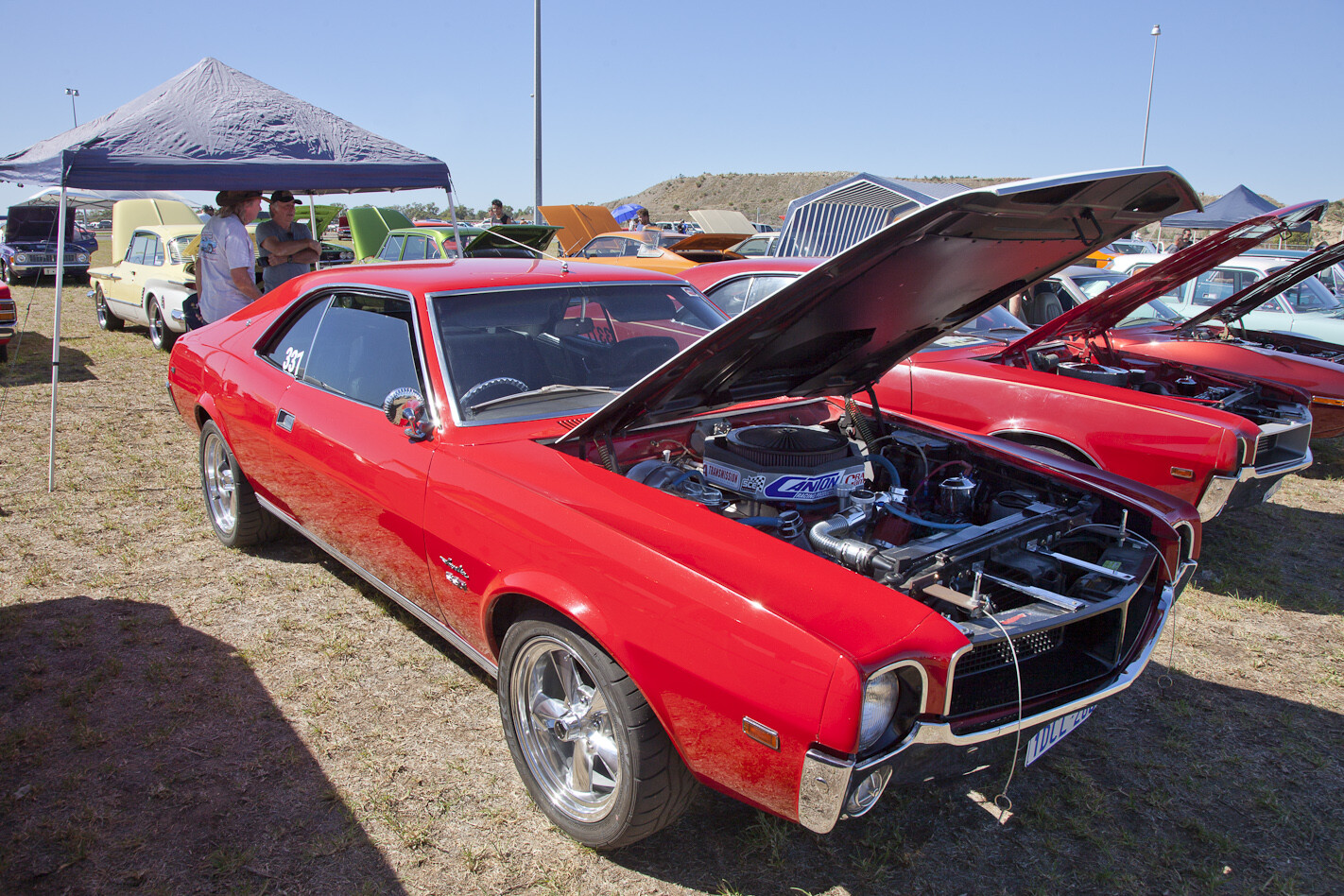 Ian and Kath Taylor brought along their ’68 Javelin, which features a pretty trick fibreglass bonnet that has a 1970 Ram Air scoop moulded into it. Ian made it a full cold-air induction set-up by blanking off the underside and sealing the air cleaner to it. It’s no slouch either – with a 360 block that’s been bored and stroked out to 409 cubes, the car has already run 12.1 after backing off early. Ian’s usual weapon at the track is a big-block VG coupe that he races in Super Street. 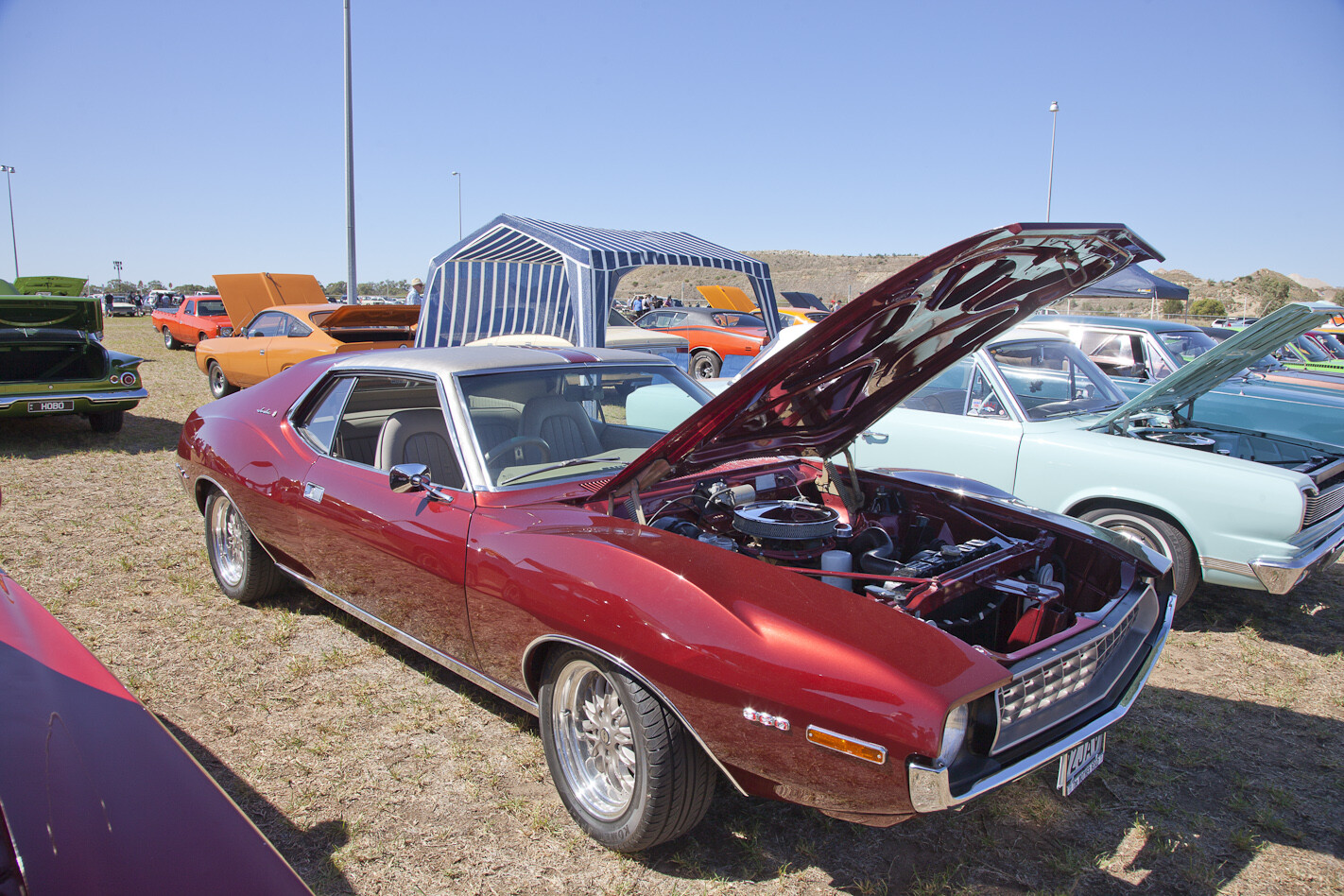 Les Owen’s ’72 Javelin is one classy bit of gear with its deep burgundy paint and silver/grey vinyl roof that’s styled like a targa top. The interior is especially tasteful and has a very luxurious look to it. Clearly they were letting anyone in! Yet another super-tidy Charger, but this one was hiding something a little special under the bonnet. At a glance it looks like just another one of those triple Weber-equipped jobbies, but when you look a bit closer you notice some extra wiring. I didn’t get a chance to chat to the owner, but it would be nice to know how much it improves the driving manners with EFI. Scotty Kelly had one of the coolest cars on display. His ‘one of none’ 340 Six-Pack VH Pacer was an exploration of what the factory could have done if it hadn’t been for that pesky ‘supercar scare’. The car actually started out as a white VJ Regal hardtop. “I always liked Vitamin C and the R/T livery – that’s why I changed to a VH – and of course, it needed more than six cylinders,” Scott said. “It was about two years in the build and the motor only went into the car three days before the show. It made 481hp at 6000rpm on Ierace Automotive’s dyno, but it’s got bucketloads of torque – over 500lb-ft for a long time.” Of course, Scott couldn’t just leave it stock, so the 340 is now 416 cubes, has Edelbrock heads and a Six-Pack intake with triple Holley carbs – 350cfm in the middle and two vacuum secondary 500cfm carbs on the outside. While most hot Chargers we spy at car shows wear the lairy R/T livery, there were some buyers back in the 70s that didn’t want to stand out like the proverbial dog’s balls. While there’s still a stripe on Alan Gower’s E37, it’s pretty subtle and the ‘6-Pack’ badge is very understated and located just behind the front wheel. Peter Selby’s gorgeous VJ Charger might wear E49 R/T livery, but it packs a little more punch than a 265 with its ex-sprint car 410ci small-block Mopar resplendent with Kinsler injection. 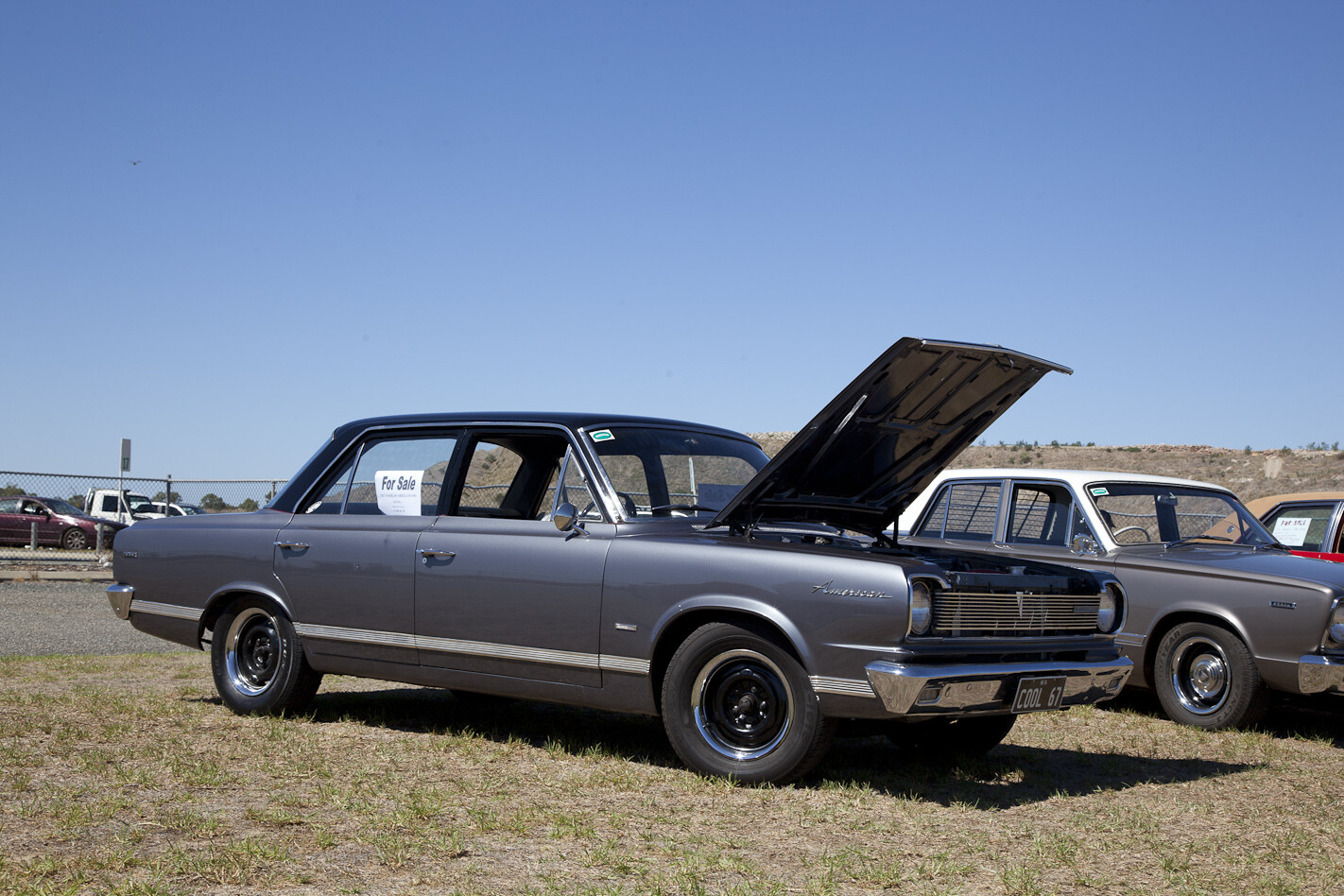 It’s not often you see one of these, well, two of these. This fine automobile was put together by young Levi McLeod, and even though he’s just got it licensed, he’s already got it for sale. It might be that he’s from a Ford family and they won’t let him park it in the garage. Darren Isaac is a Chrysler and AMC guy, and part of the reason the AMCs are welcomed into the fold at the Everything Chrysler Day. His ’68 Javelin is an Australian Motor Industries (AMI) factory RHD car that was assembled in Port Melbourne at what is now the Toyota plant. It was pretty amazing to see one of these in the flesh, and they don’t get much nicer than John Poynton’s ’70 Plymouth Superbird, which underwent a full restoration in the USA. It’s one of the very desirable Hemi cars, but what I can’t get my head around is that the original owner ordered it with a bench seat and column-shift auto. I dunno, maybe he had four kids or something crazy like that and needed the six seats. Rob Panizza was kind enough to bring in two absolutely stunning ‘big tank’ VH R/T Chargers, both optioned with the A84 Track Pack, but one being the three-speed E38 and the other a four-speed E49.