NOW that Adelaide’s had a consistently running drag strip for six years, the flow-on effect has been a surge of single-figure street-and-strip monsters. Turbo-powered small-cube rides are now commonplace in a land where naturally aspirated, big-inch cars once dominated. So it seemed a good time for Street Machine to venture along to a Fast Friday quarter-mile street meet-style event at Adelaide International Raceway for a gander at the current scene. 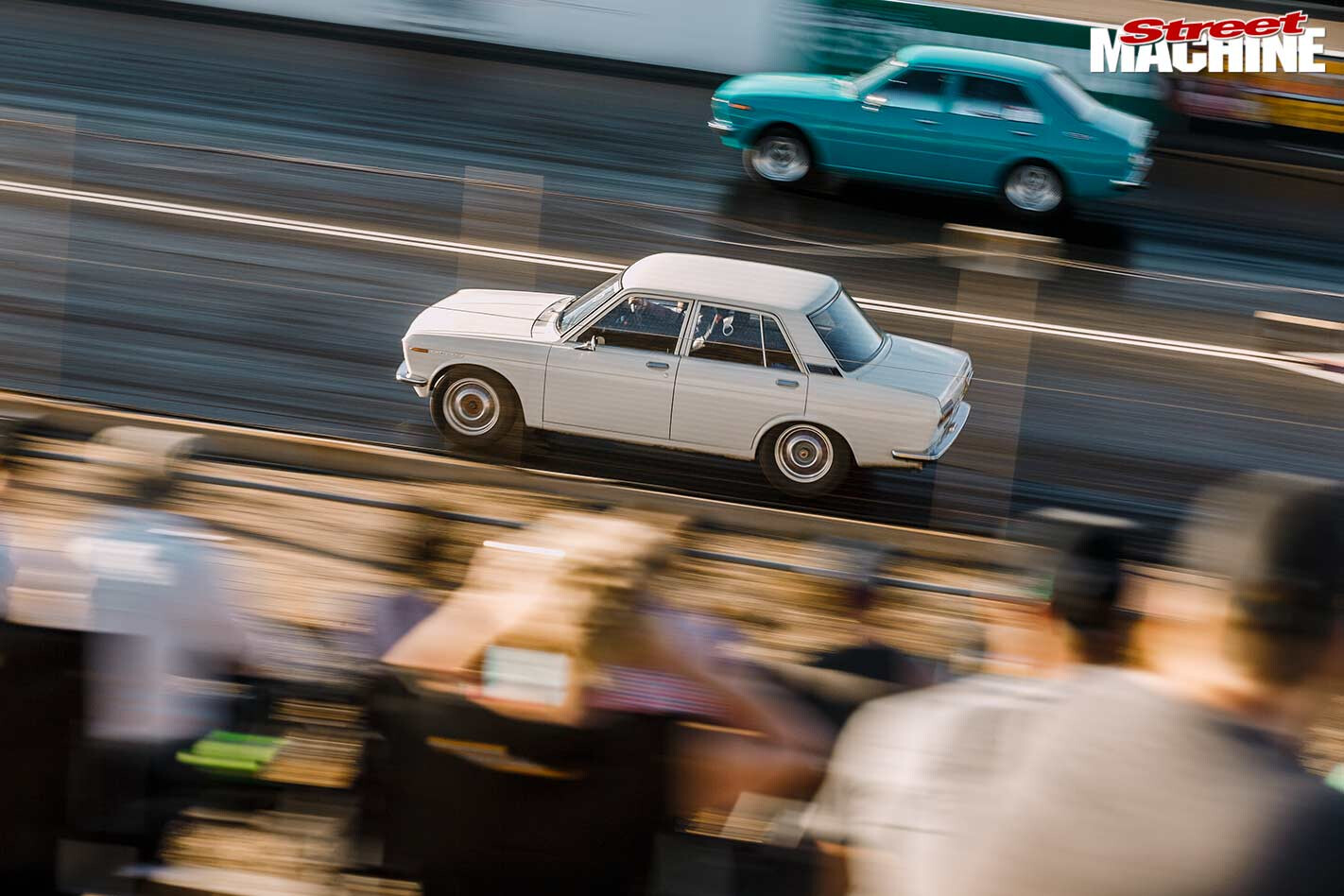 Fast Friday events are open to everything from bog-stocker streeters to comp cars that need some test time. The mix makes for a great visual and acoustic feast, and at $75 for pre-entry, it’s cheap racing – if you don’t break anything!

Although an unusually humid day with the threat of rain kept both entrant and spectator numbers down, those that did rock up got in as many runs as they dared, and some even managed to run their best numbers against the odds. While the event was laden with Holdens in a city that’s still grieving the General’s departure, it was a 70s Ford that stole the show: Phil Edmondson’s ‘White Whale’ XB coupe belted out an 8.97@154mph pass, in a strong headwind. Phil’s been chasing eights since last year’s Street Machine Drag Challenge, so he was a very happy camper having pulled that number straight off the (nonexistent) trailer.

“I went through the tune for over an hour last night with Nathaniel from Dandy Engines remoted into my laptop,” Phil said. “I planned on only changing the off-the-line boost over all the runs to get consistent data. I tried feeding in more boost off the line, but I’m guessing it was the humidity that kept me from seeing another eight.” It’s events such as our own Drag Challenge and the US-based Hot Rod Drag Week, along with the Street Outlaws TV show, that we can thank for the rapid rise in super-fast street-driven drag cars. For proof, look no further than the SA Street Outlaws Top 20 list and related Facebook page. To make the Top 20, you need to drive to the track in your crazy-quick streeter and run a single-figure pass in full trim. Do that and you’ll be popped onto the list by the page administrator, the forever-patient Jake Sansovini. Simples! Phil’s eight-second pass saw his XB bump up into second on the list, knocking Luke Cakebread’s twin-turboed 370ci powered LX Torry to third. Another mover and list shaker was Anthony Ghinis’s turboed RB30-powered LC GTR Torana (SM, Oct ’08), which rocketed into fourth with a 9.08@141mph late in the night. Probably another half-dozen from the list were giving it a crack, but the heavy air held them in place. With a few top spots being nabbed in one night, and close times between them, it’s a guarantee that those displaced won’t take it lying down. I reckon it’s a powerful injection of fresh energy into what was a plateauing sport in Adelaide. Quite a few competitors on the list are good mates, crewing for each other when they’re not racing themselves, harking back to how the culture was when AIR first opened in 1972.

With the list shake-up, along with early testing for several Drag Challenge potentials, Fast Friday showed that these street meet-style events should have some top-level racing in store in the foreseeable future. The SA Street Outlaws Top 20 Facebook page guru, Jake Sansovini, gave us a brief rundown on the rules of The List. “To make the Top 20, you need to drive to and from the track, with no changes made to the car at the track unless it’s safety-related, such as a parachute fitment. You need to run the full interior, use any form of radial tyre, use the street exhaust, and you need current SA rego,” he said. “The page was made for shits ’n’ giggles, just to recognise a few of Adelaide’s true street cars that can lay it down at the track, but it then took off! The hype and competitiveness are unbelievable; currently there’s at least 10 cars in the build aiming for seven and eight seconds.” 1. Young gun Brock Langley has crewed for his parents Kylie and Paul on their tough and consistent Super Street HX for years, so it’s only fitting that the 19-year-old lets off steam in the same fashion. While the apprentice mechanic did get a blat in the HX as an 18th birthday present, his personal steed is this VY Commodore running a 3.8L V6, Getrag manual gearbox and 3.46s in the rear. “My PB is a 15.6sec quarter; that’s with nitrous and a blown second gear, so I’ll soon be swapping the manual for a TH350”. 2. Paul Jacobs’s silver WK Caprice runs a turbocharged LS1 and sits in 22nd on the SA Street Outlaws list with a 10.007@137mph. Nines are oh-so-close, but proved elusive at Fast Friday due to the heavy air. 4. Phil Edmondson is putting in seat-time to set up his XB coupe for Street Machine Drag Challenge 2018, though the car won’t be kept as-is for too much longer. “I have a bigger, billet 88mm BorgWarner turbo on the way,” he said. “Once set up, the car will be hub-dynoed with a focus on the tune. Also, the rear end has never been properly set up, so I’ll work on that. And on top of that, I need a new converter, and I’ll have the guys at Adelaide Motorsport Fabrication build me a larger stainless exhaust”. 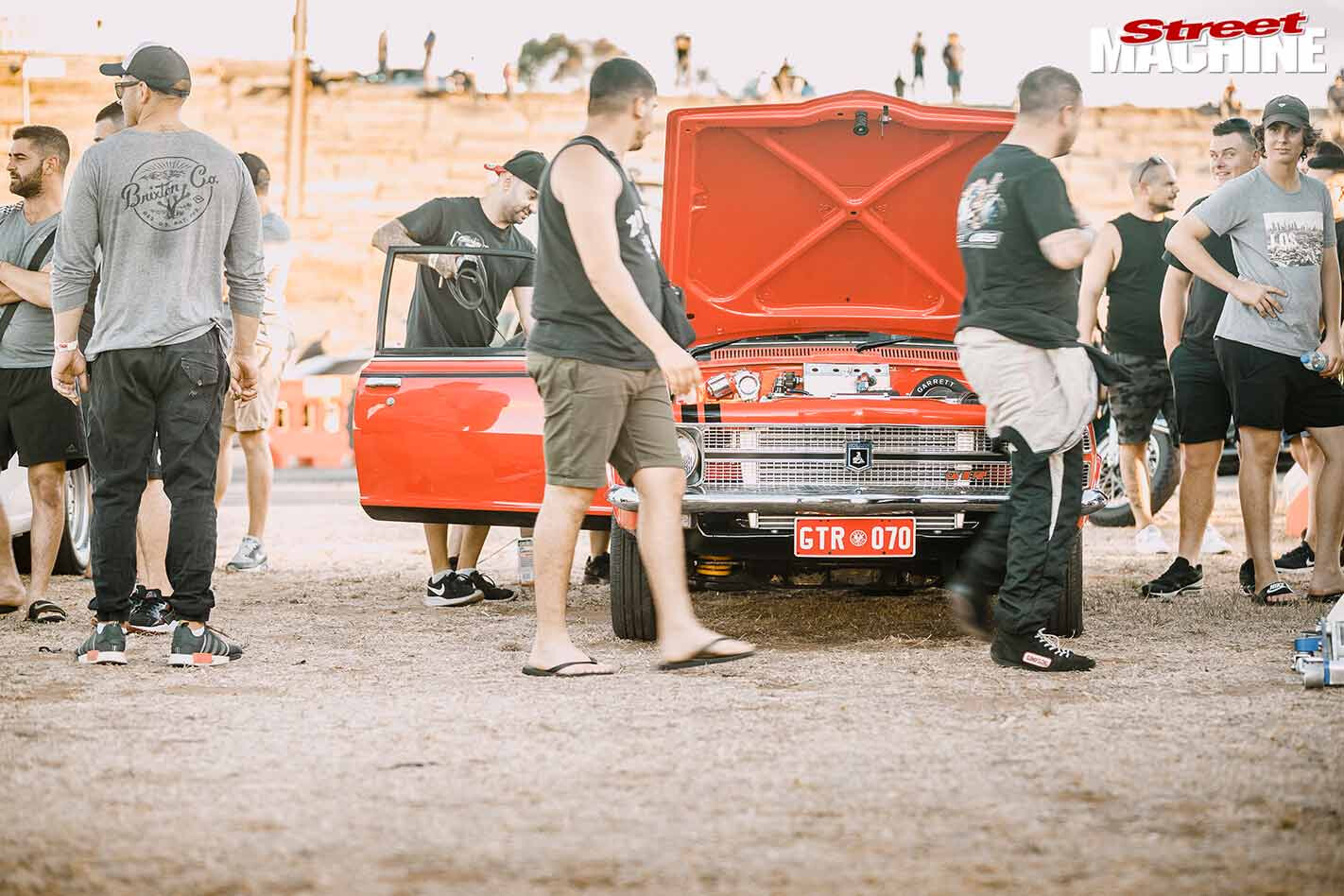 5. Anthony Ghinis’s streetdriven, trophy-haulin’ LC GTR Torana continues to pump out quick numbers. With a previous PB of 9.15@145mph, Anthony blew that out of the water with a 9.08@145mph at Fast Friday, moving him up to fourth spot on the SA Street Outlaws list. “If there wasn’t a big headwind I think we would have got an eight,” said Anthony of the turboed RB30/C4/9in combo. 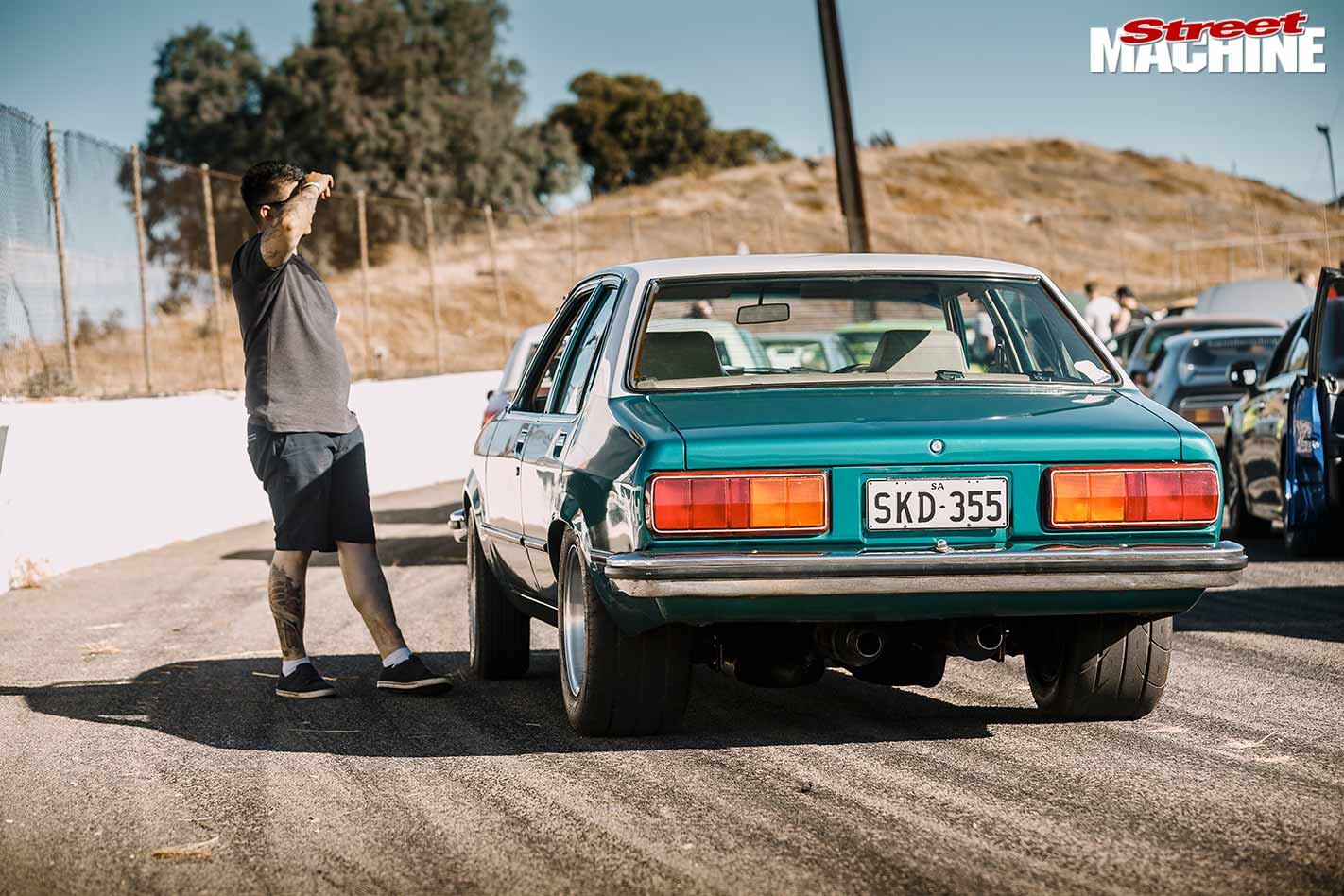 7. Rory Hatch travelled six hours from the mining town of Roxby Downs for his first quarter-mile pass. His local track is the eighthmile at Whyalla – a mere 330km from home! His grandpa-spec UC Torana runs a Holden 355ci backed by a T350 and BorgWarner diff. Rory ran a tyre-lifting 11.2@117mph, improving on his PB of 6.99@98mph over the eighth. 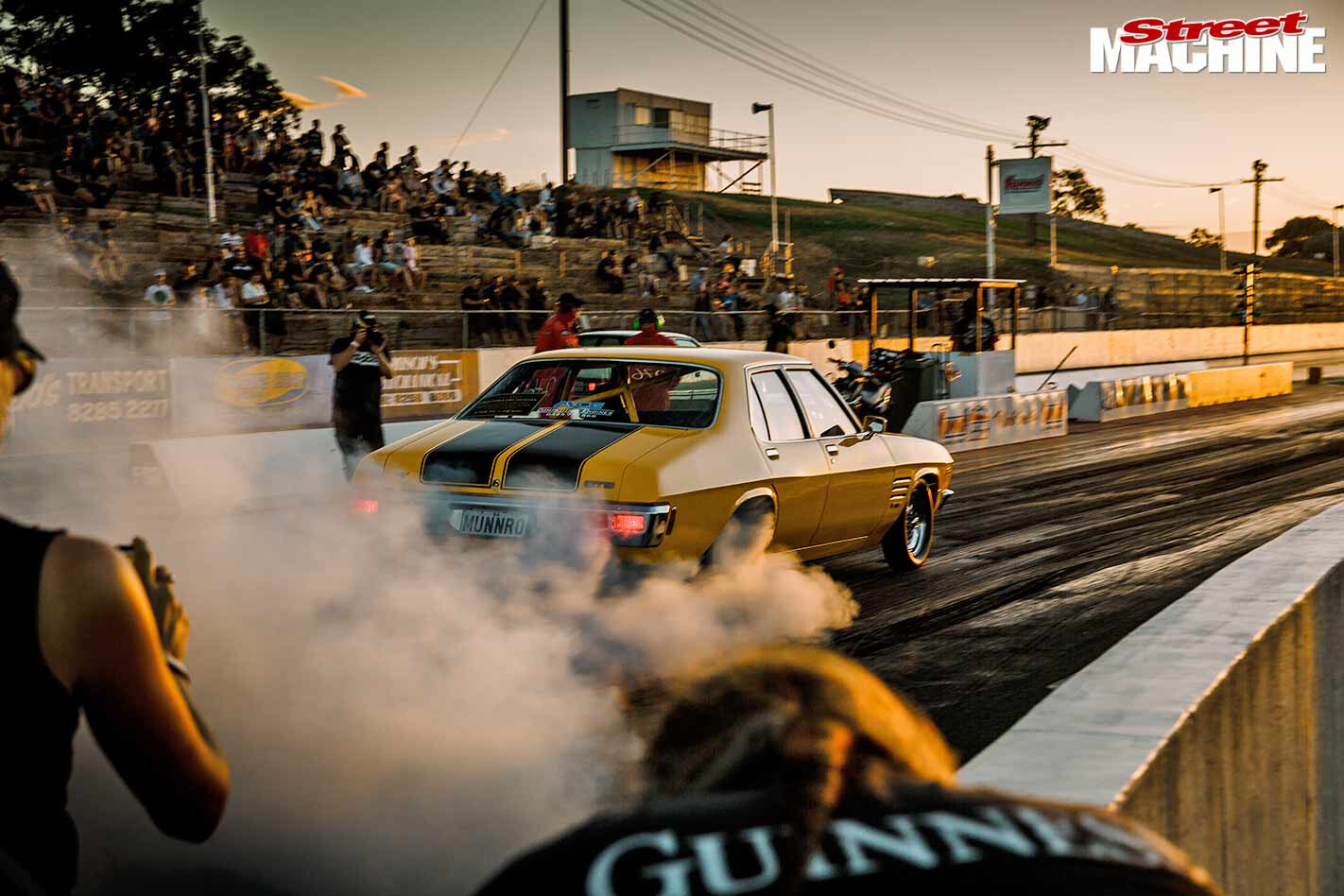 8. Ryan Oldman’s first night of stomping quarters in his race-ready Chevy-powered HQ four-door saw his numbers tumble as he calmed the nerves and got on the gas. Up front is an 800hp 572ci backed by a ’Glide, soon to make way for an equally cubed 1100hp donk built for a 500-shot of gas. His best pass of the night was a wheel-lifting 9.96, but he’s hoping to go mid-eights with the new set-up. 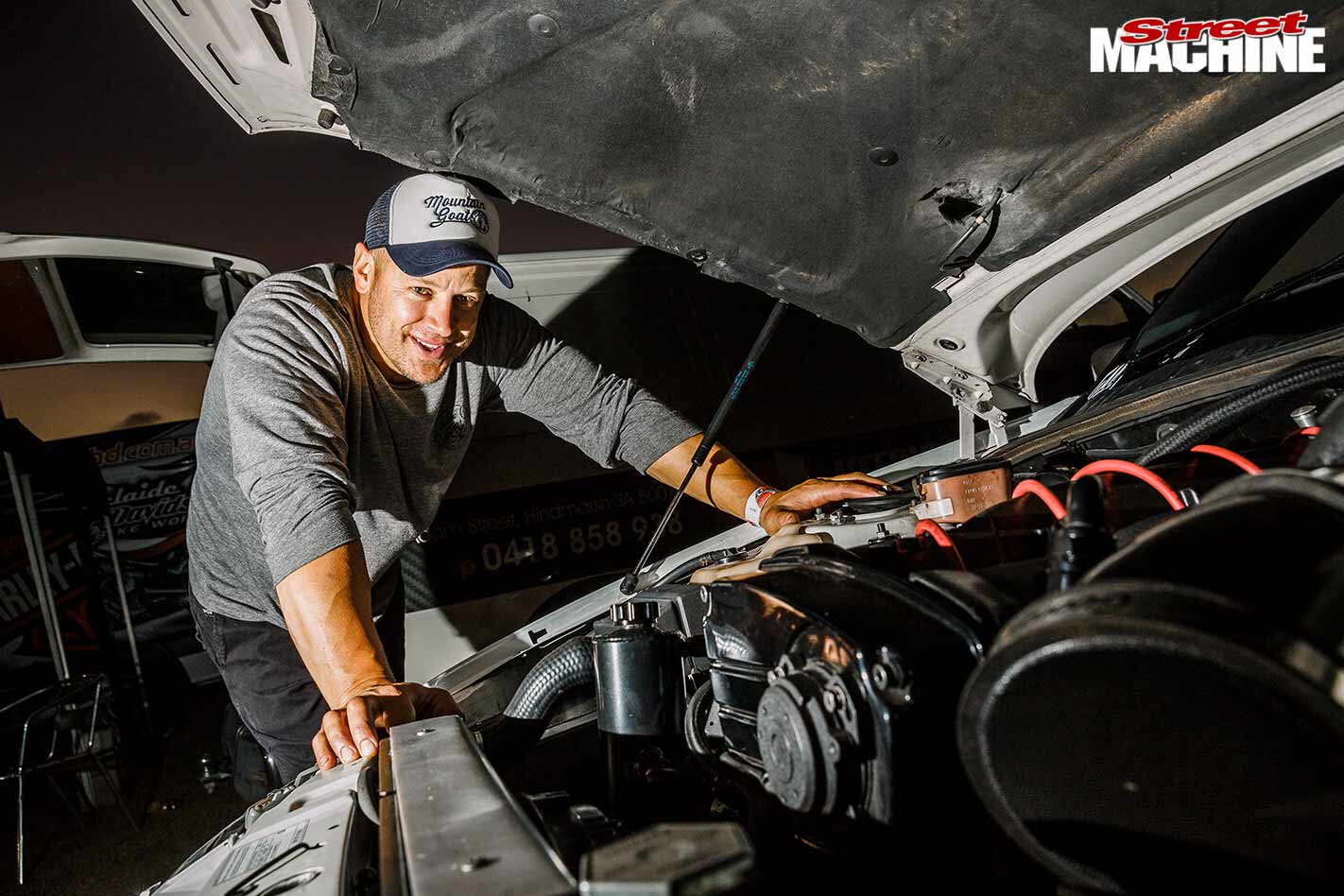 9. Sitting in lucky 13th place on the SA Street Outlaws list, Dave Lockett couldn’t better his previous PB of 9.60@141mph, instead pumping out a run of 10sec. The stout GT42 turboed RB25/30 VR Holden ute is as tidy as it is quick, offering a full sleeper vibe once the bonnet is closed. The venerable Nissan sixcylinder is backed by a Powerglide and BorgWarner diff with 3.45 gears, a package that Dave aims to get into the low nines or high eights.