AFTER one of the wettest and windiest West Aussie winters I can remember, I was more than happy to jump on a plane and head north to Darwin for a few 32-degree days and a touch of humidity. The reason? To check out the happenings at The Shed Company Gazzanats, a jam-packed one-day event held at Hidden Valley Raceway. 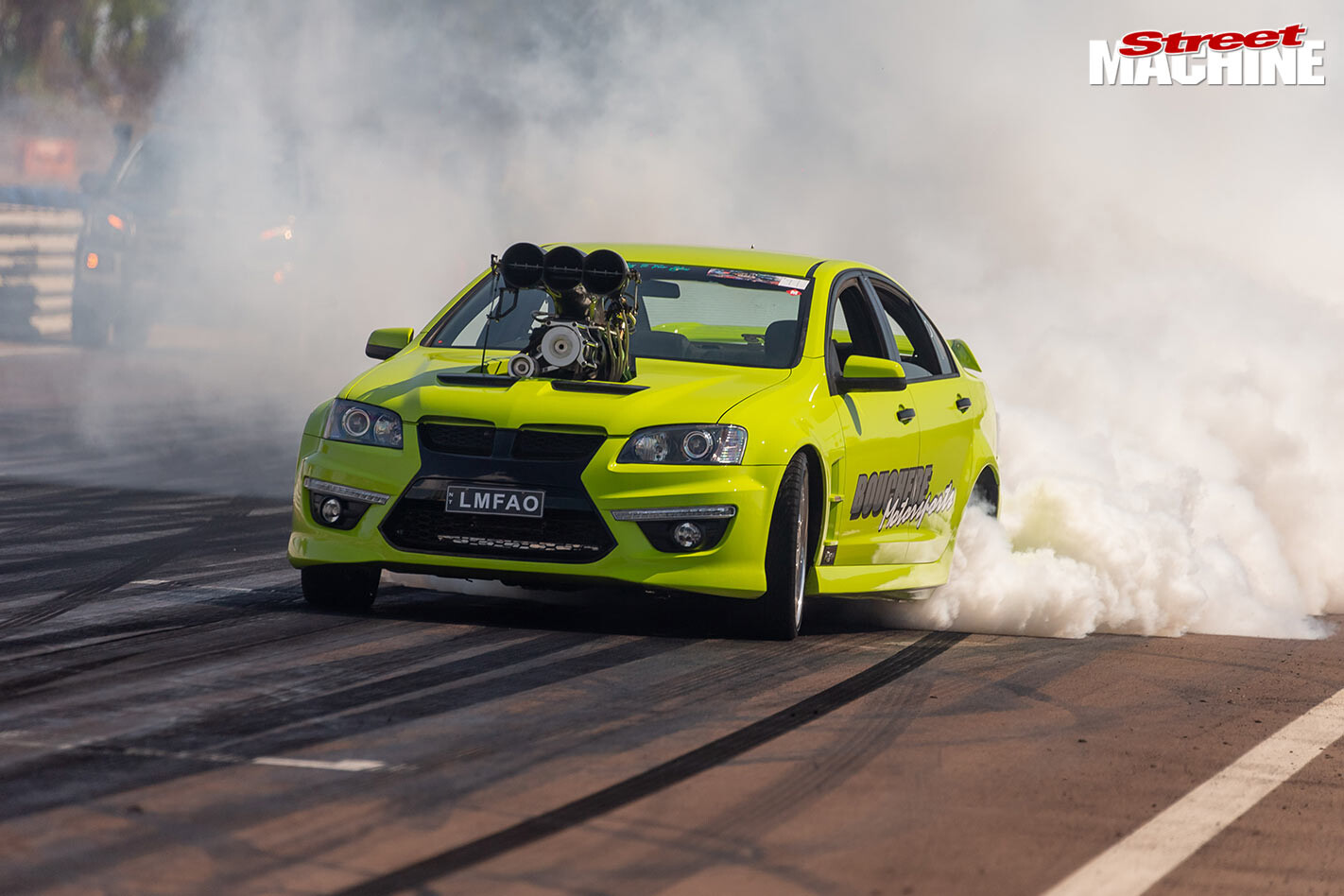 What a great venue for an event like this! Not far from the airport and just a 15-minute drive back into town, the track itself is a cracker, with a 1.1km straight and a good mix of corners, all completely visible from the viewing platform above the pits. The burnout pad is pretty tight – especially when you’re used to the expanse of the Snakepit at the Perth Motorplex – but that didn’t deter any of the competitors when it came time to tip it in! The car park area behind the pits was perfect for the show ’n’ shine, and beyond that was a skidpan where the drift display ran non-stop.

Apart from the sunny weather, the other great thing about visiting Darwin – or the NT as a whole – is the laidback atmosphere, where everyone is happy and smiling and having a great time. I admit, we may have sampled a bit too much of that laidback vibe on Friday night and paid for it on Saturday morning, but the beers were cold and the music was great, so what’s a bloke to do? 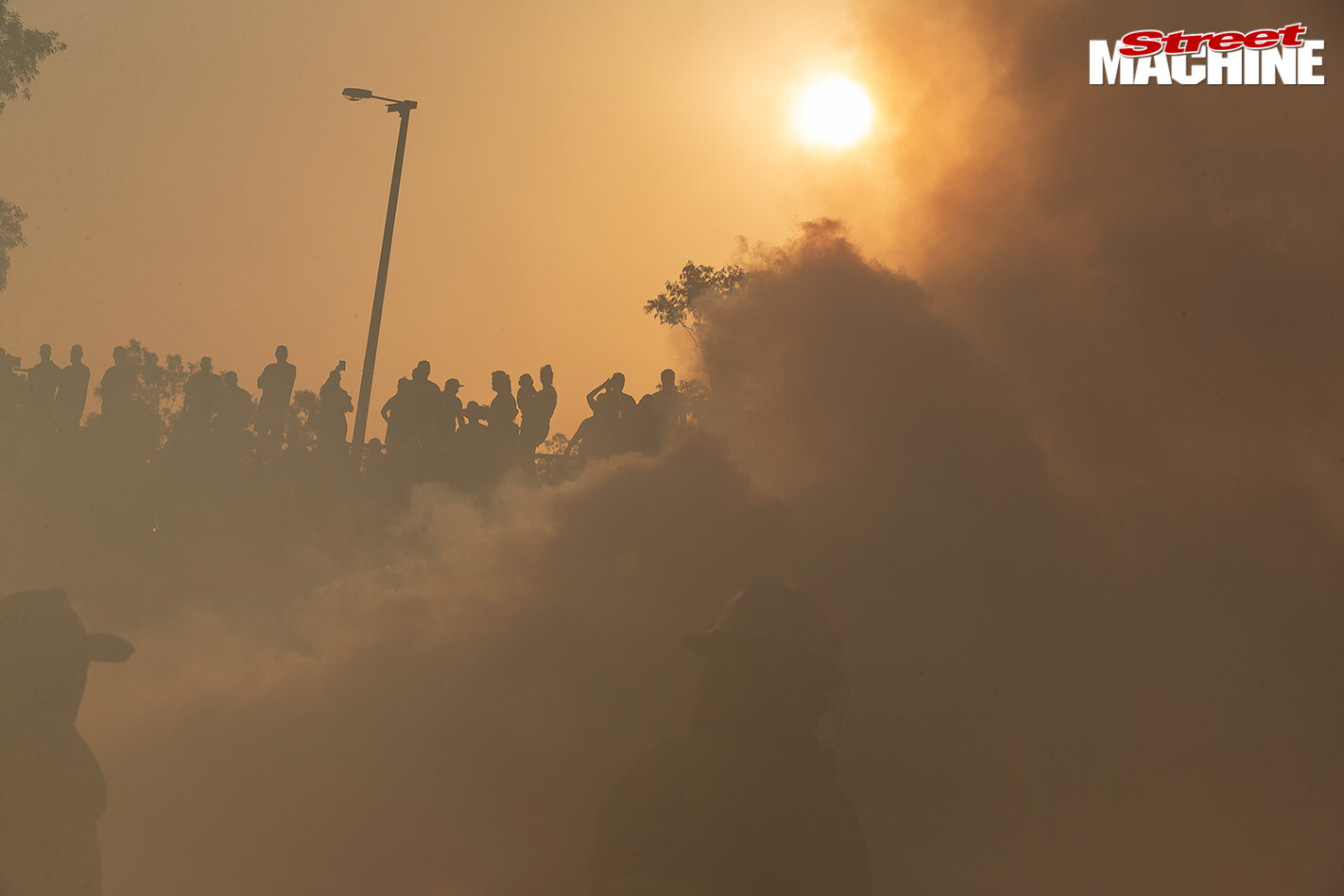 The smell of methanol and the sound of blown and injected engines warming up soon woke us up, and the action was coming on thick and fast right from the start at Gazzanats, with the go-to-whoa taking place on the main straight. While there were a handful of Skylines in attendance, the cream eventually rose to the top and Eddy Furlan in his 1931 Ford Model A coupe took the gold – on crossply tyres no less! Hidden Valley is also perfect for running a superskid competition. That aforementioned 1.1km straight means there’s no problems with people running out of road. The skill lies in keeping the car in a straight line while blazing the tyres at ever-increasing speeds – with concrete walls on both sides of you. Proving that he’s not just a pretty face, Barry Hall – yes, he of AFL fame – took the win in a car he’d never driven before! He was invited by the Castlemaine Rod Shop guys to drive BLOWNHJ, an HJ ute that they’ve fitted with one of their tube front-ends and massive Wilwood brakes, powered with a blown and carbed 6.2-litre LS built by BNR Engines making almost 1000hp on methanol. He also tackled the burnout competition, something he’d never done before, putting on a pretty good show for a first time out but getting stuck a couple of times due to very little wind and a hell of a lot of smoke. “I was just happy to give the car back in one piece!” said Barry.

MORE NUTTR blows the supercharger off during 10,000rpm burnout at Gazzanats 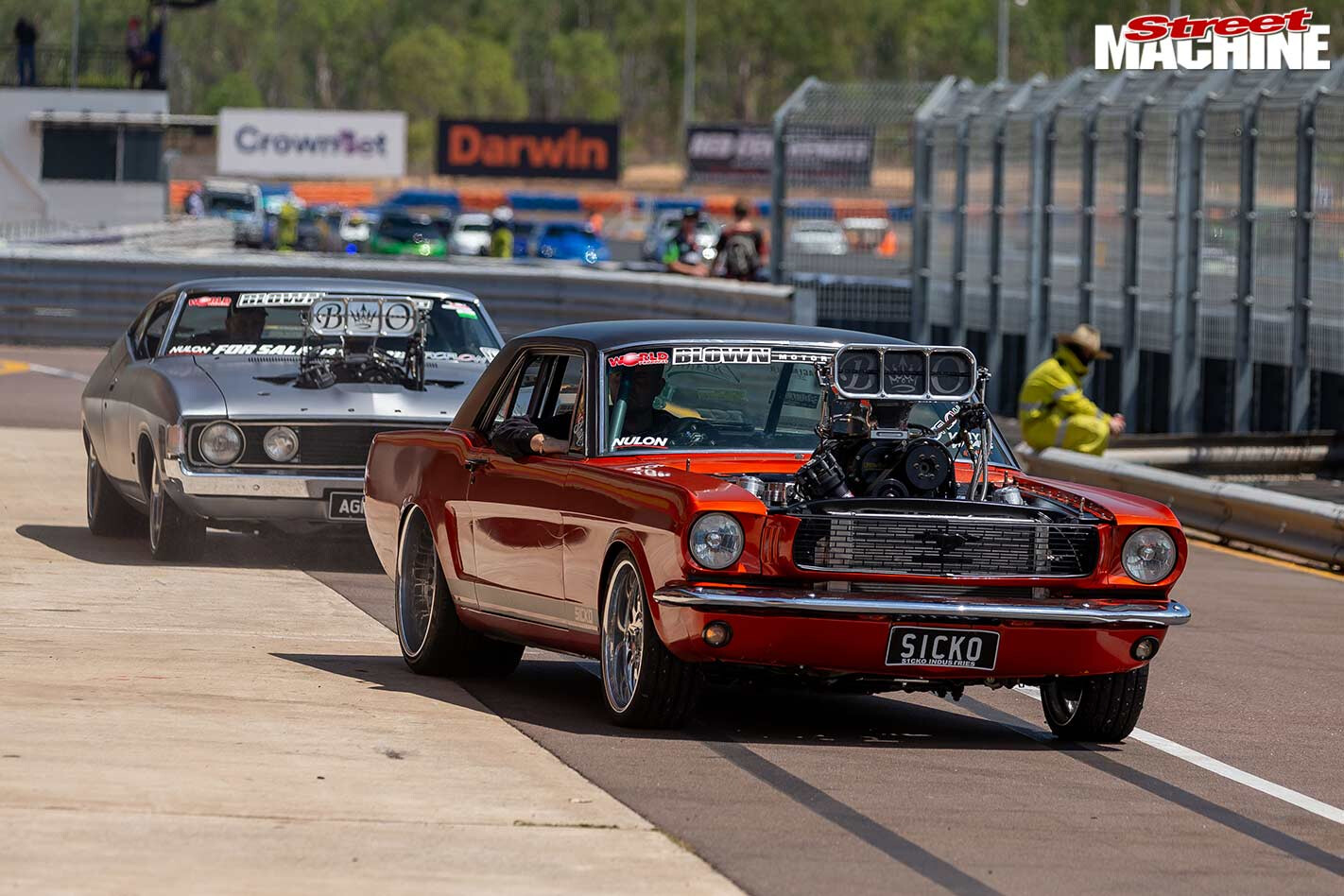 The great thing about visiting another city is that you get to see a whole bunch of cars you’ve never seen before, and there were a few that stood out for me over the course of the event. For a high-quality cruiser, it was tough to walk past Mark O’Callaghan’s ’69 Mustang fastback. A beautifully built car with a few modern updates, including a full coil-over suspension, air con, power steering and 18-inch Magnum 500s. Powering it was some good old-fashioned Ford muscle in the form of a 432ci Windsor, but it was also dragged into the 21st century with a FiTech EFI system. With almost 600hp on tap and a TKO600 five-speed, it’s the perfect car to soak up the miles. In complete contrast to Mark’s Mustang was Matthew Berry’s Toyota Starlet, but before you start sending abusive emails about why SM is talking about small Japanese cars, hear me out – this isn’t your usual Japanese appliance. For a start, the car’s got eight cylinders, it’s just that they’re kind of spread evenly around the car. There are four up front in the usual place, then another four mounted behind the rear seat. Oh, did I mention the turbos? Each engine also has a GTX 28/67 turbo attached to it, and on E85 each mill makes 300hp. So, just in case you don’t have your calculator handy, that’s 600hp, all-wheel drive in a package that weighs around 1100kg. Absolutely stark raving mad – but brilliant at the same time. A lot of thought – and trial and error – went into making the car work, and when I say work, I mean not spit Matt off the road every time he sinks the boot in. The car has already run 10.50s with just 420hp, so it should be in the single digits very soon. There was plenty of other tough stuff running around all day, with a strong West Aussie crew including Paul Settatree in HWY2HELL, Matt Hughes in MON5TA and eventual burnout winner and show ’n’ go champion, Sam Lord in BADHABIT. The Rod Shop boys helped Gazzanats head honchos Gary and Deby Myers out after a few late withdrawals and brought up three cars: the previously mentioned ute, the bare-metal REAL DEAL GTR Torana, and the WARBIRD XP Falcon. The little Torry was a big hit all weekend, smashing plenty of tyres and taking a bunch of people for hot laps with the Rod Shop’s Heath Waddington at the wheel. Unfortunately for his brother Marc, the Falcon rejected the big-block Chev early Saturday morning while being warmed up: “We noticed that number eight didn’t have any temperature in it. It turned out to be a couple of broken pushrods,” Marc explained. “Luckily they fell down into the valley, so hopefully there isn’t too much damage.” It was a real shame, because the car performed flawlessly at its last outing and it would have been great to see it out on the track.

If you ever needed an excuse to visit Darwin, or the NT in general, then Gazzanats offers the perfect opportunity to get away and enjoy some sun and the Top End’s laidback lifestyle. There’s plenty to see and do, a wealth of history and culture to absorb and a thousand other places of interest you could visit with the whole family. 1. Chris Dinning’s XR Fairmont copped plenty of attention from the public and the judges, taking home a swag of trophies. A very tidy 347 Windsor features FAST EFI, and there’s an RRS front end and CalTracs to get the grunt to the ground 2. At any car event people like to see variety, and there was plenty of that in Darwin 3. Gary and Deby Myers brought back the Dash 4 Cash event, where the driver had to reverse out of a garage, go through a chicane into another garage, then get out and run around the car before heading back through the course. John Curwen- Walker didn’t win, but he sure looked good doing it 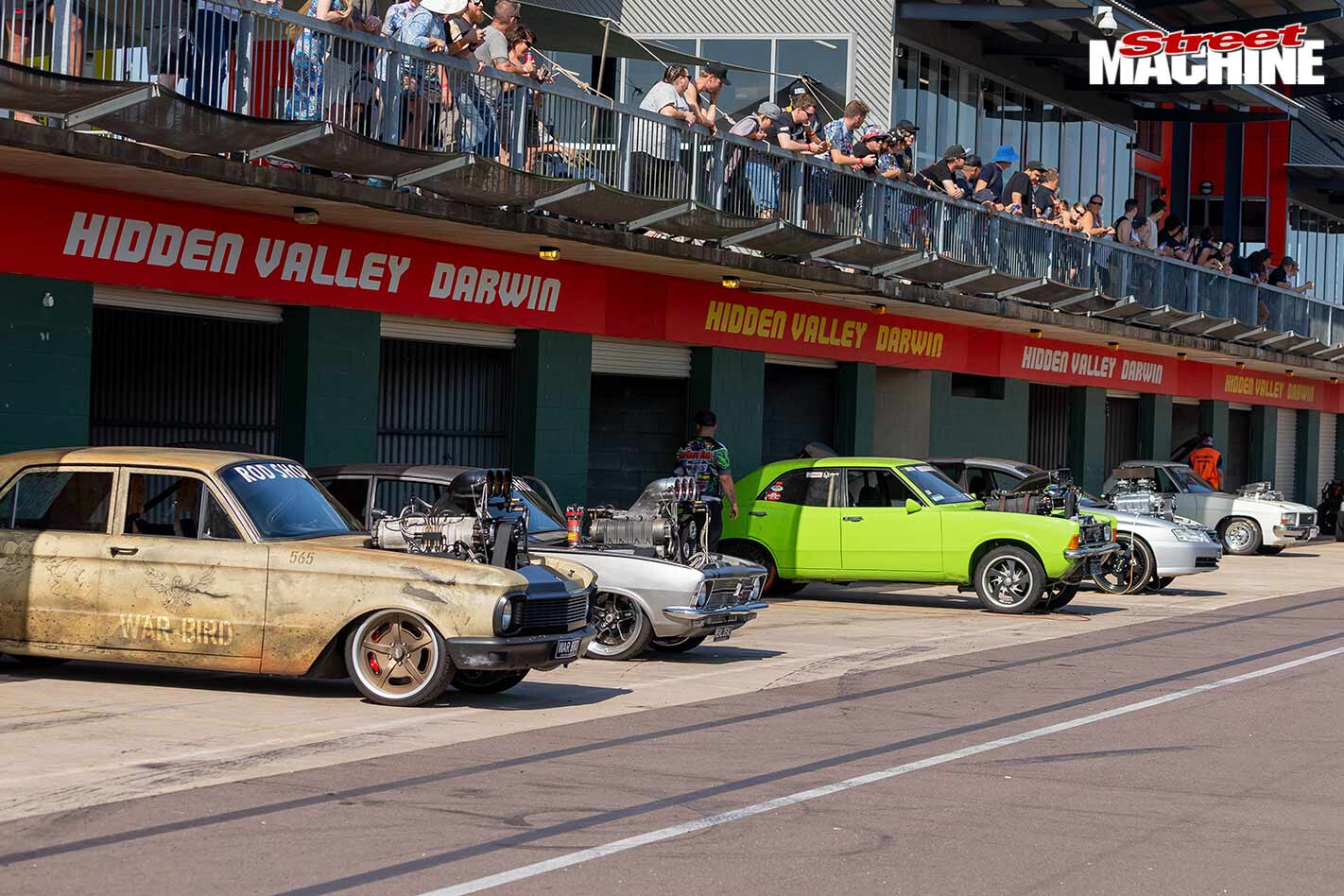 4. There were some big hitters that made the long haul to Darwin, including the Castlemaine Rod Shop boys, who brought up three blown cars, including BLOWNHJ, just so Barry Hall could have a crack at the burnout competition 5. The stunning ’68 Camaro of Dave Carpenter looked great at the show ’n’ shine but even better belting down the main straight of Hidden Valley Raceway 6. Eddy Furlan was all smiles after taking out the go-to-whoa in his Model A coupe, proving once again that age and experience can win out over youth and enthusiasm – and he did it all on crossply tyres! 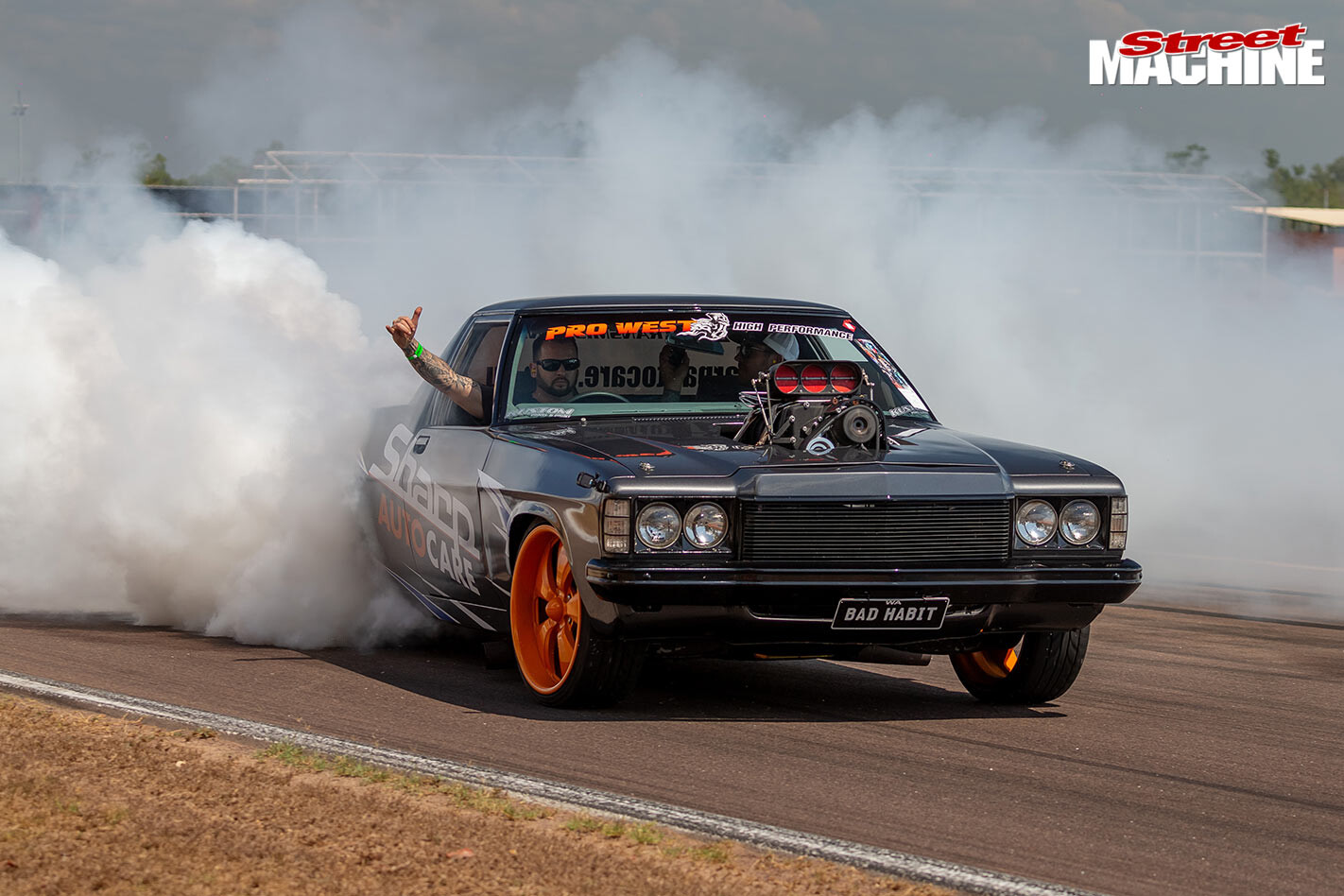 7. The big winner for the weekend was West Aussie Sam Lord, who took out the Blown-class burnout comp as well as the Show ’n’ Go award for the best-performing and best-presented car at the event. Sam had the HZ ute on song all weekend and it always looked sharp 8. I’m smiling because not only did Matthew Berry manage to squeeze 300hp out of a 1.5L Toyota 5E four-cylinder, he did it twice! Yep, there’s a matching engine in the back, so what you’re looking at is a 600hp, all-wheel-drive Toyota Starlet! I can confirm it goes like the proverbial shit off a shiny shovel after experiencing a couple of hot laps in Darwin, and if you want to find out more, look up ‘Evil Twin’ on Facebook 9. There was a pretty heavy West Aussie presence at Gazzanats, with Paul Settatree in HWY2HELL and Matt Hughes in MON5TA both taking home prize money in their respective burnout classes. They did a ton of cruising and smashed plenty of tyres throughout the day 10. Benny Circle and KERMITD made the haul across from Cairns after their recent win at the Tropical Meltdown, and put on a colourful show for the Darwin crowd 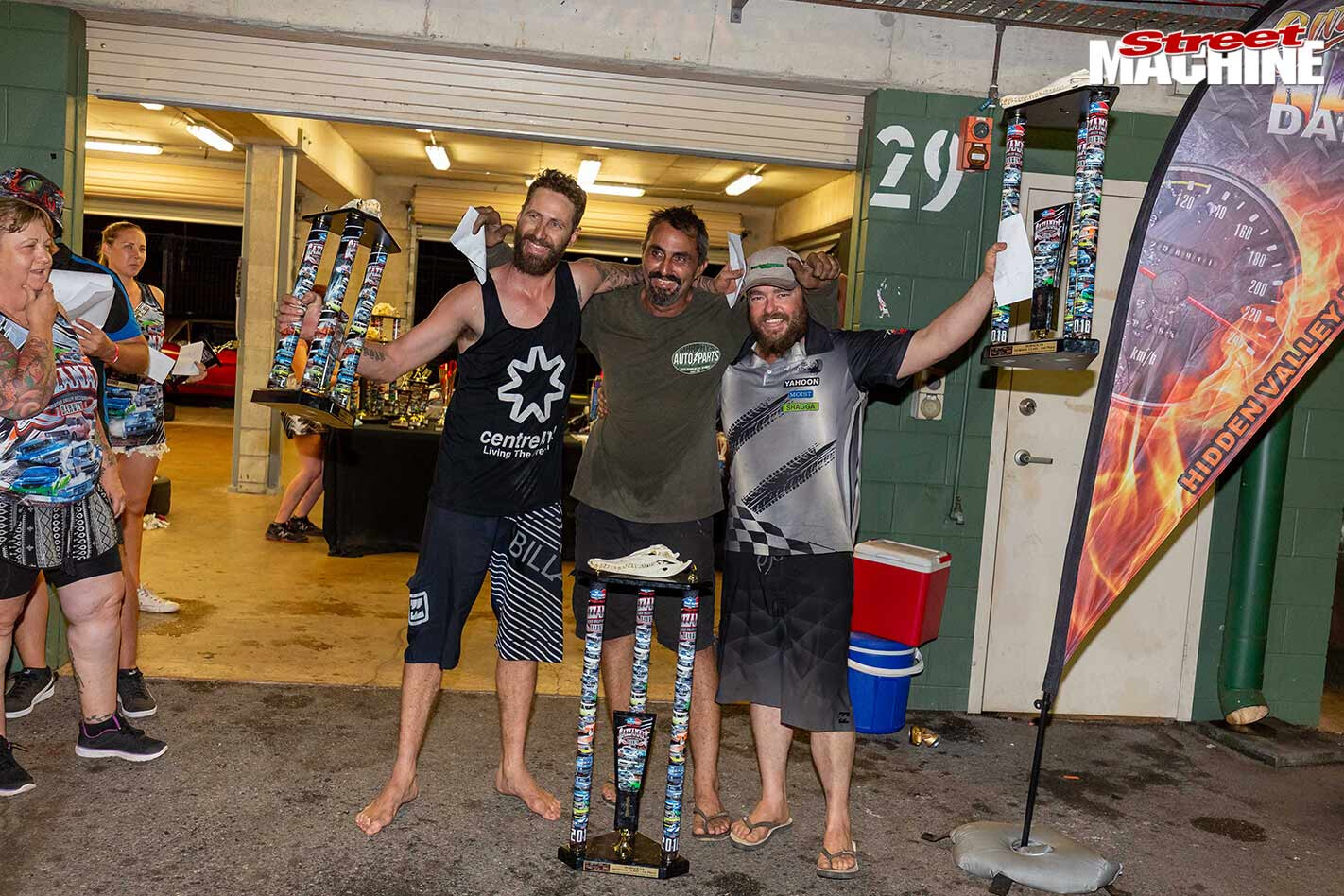 12. It took Gary ages to catch and skin all the crocodiles for the trophies, but it was worth it in the end – they came up a treat! 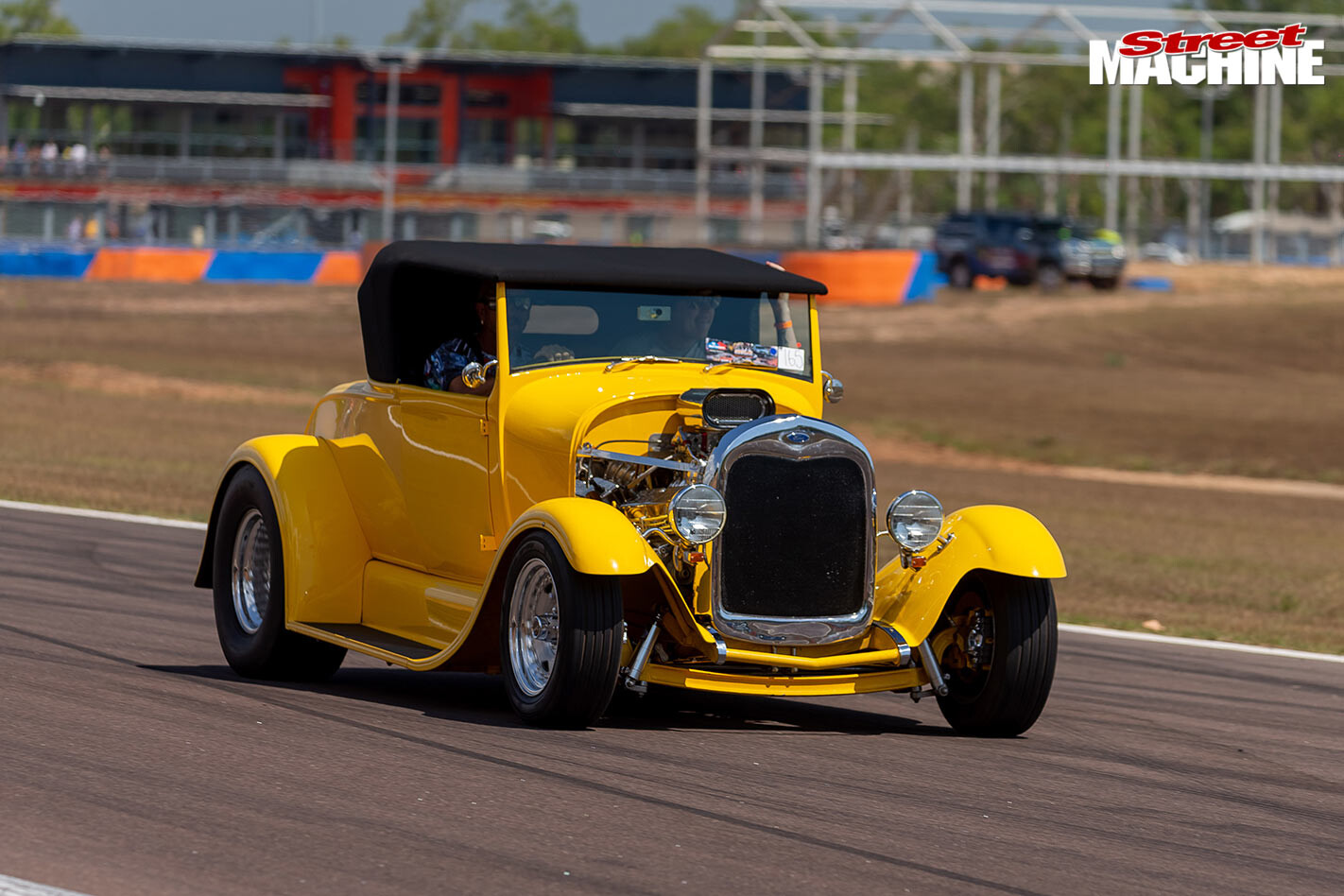 13. This sweet Model A roadster had a little B&M blower perched on top for a bit of extra boogie 14. Barry Hall was invited by The Rod Shop boys to drive their BLOWNHJ ute, and he didn’t let them down, bringing the car home in one piece and also taking out the superskid competition. Not a bad effort for the first time out in a car he’s never driven 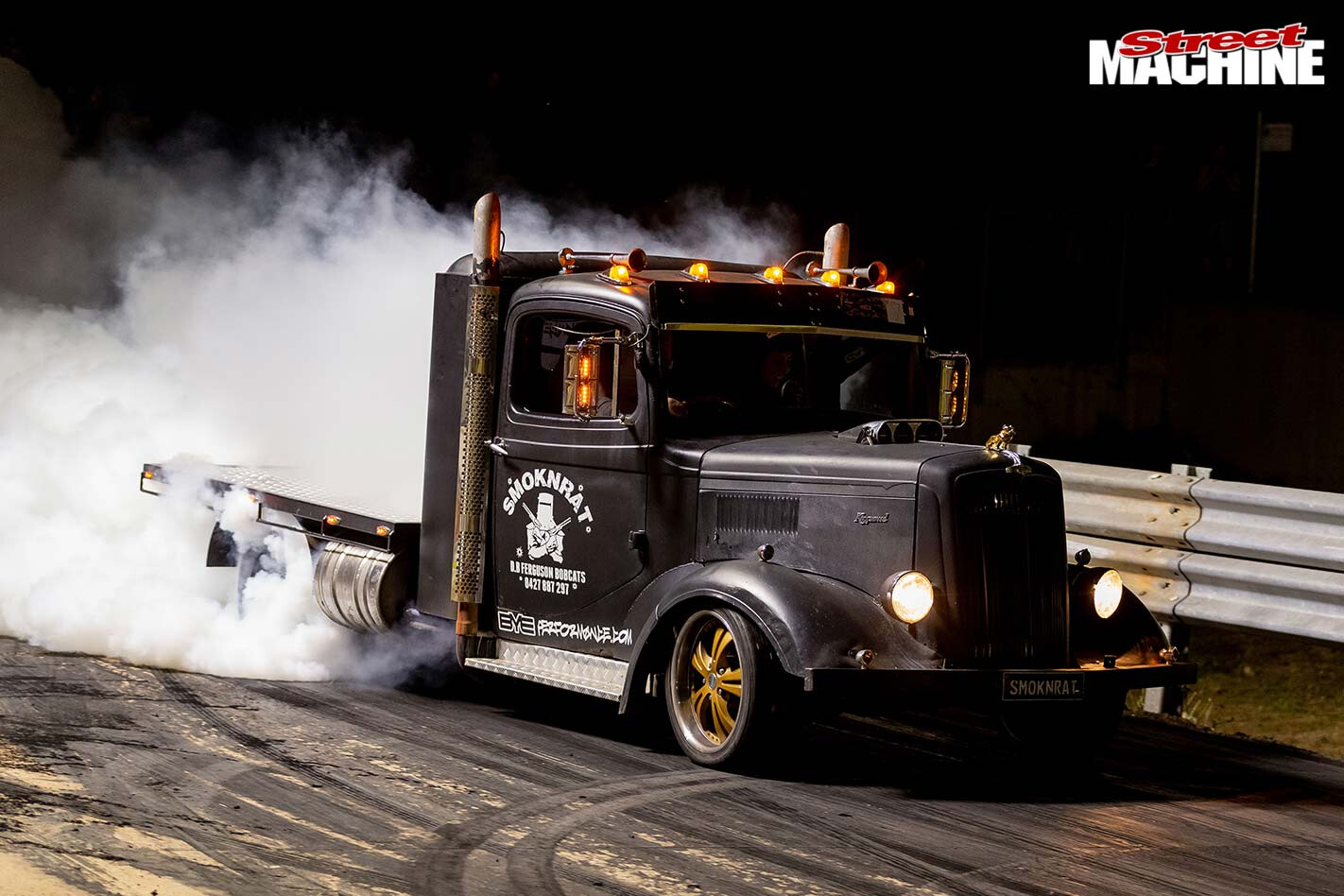 15. Fergie had a massive weekend in his blown LS-powered Morris truck, chucking laps and getting that old truck up to speeds the old Poms that designed it would have never dreamed of. To top it off, he scored third in the Blown burnout class 16. Duncan McKinstray’s ’34 Chev roadster is packing some serious horsepower, keeping up with many newer cars and pulling smoky superskids 17. The XD Falcon of Danny Probert from Xdrift Industries has been a long-time competitor in drift competitions with various powerplants, but it’s recently had a complete makeover and is now powered by an FG F6 engine fitted with a GTW 38/84R turbo, Peterson dry sump, G-Force GSR dogbox and an FG diff, with the company’s own IRS suspension 18. Kristan Butler has a bit of a thing for KE20 Corollas – a thing where he stuffs a V8 into them and then goes and destroys tyres at burnout comps! We first spotted him at the inaugural Red CentreNATS where he won the Naturally Aspirated class in MENACE. That car has been sold to his mate Frank Paesel and competes as RUB1OUT. Instead, Kristan rocked up with this beautifully finished-off machine named BERZERK. He’s stepped up to the Blown class with a 6/71 and methanol injection mounted on an LS, and the car earned fourth place in its first outing 19. This Opel Monza with a VH Commodore front end rocked up and instantly drew a crowd. With a partially stripped-out interior, it looked likeit had been set up for racing, but the owner was in a hurry and then, like Peter Brock, he was gone 20. Heath Waddington gave the baremetal REAL DEAL Torana a belting all weekend and it didn’t miss a beat, taking home second place in the Blown class and doing a ton of laps as well