Judith Menso has turned her first car into a supercharged show-stopper!

You never forget your first car. But deep down, most of us were pretty happy to move it on to get something less slow, less rubbish or less crashed.

Not so Judith Menso. She’s faithfully clung on to her first four-wheeled love - a 1977 LX Torana - now unrecognisable from the paddock-bashed, twice repainted nail of a Sunbird LX she first bought for $5000 in 1992. 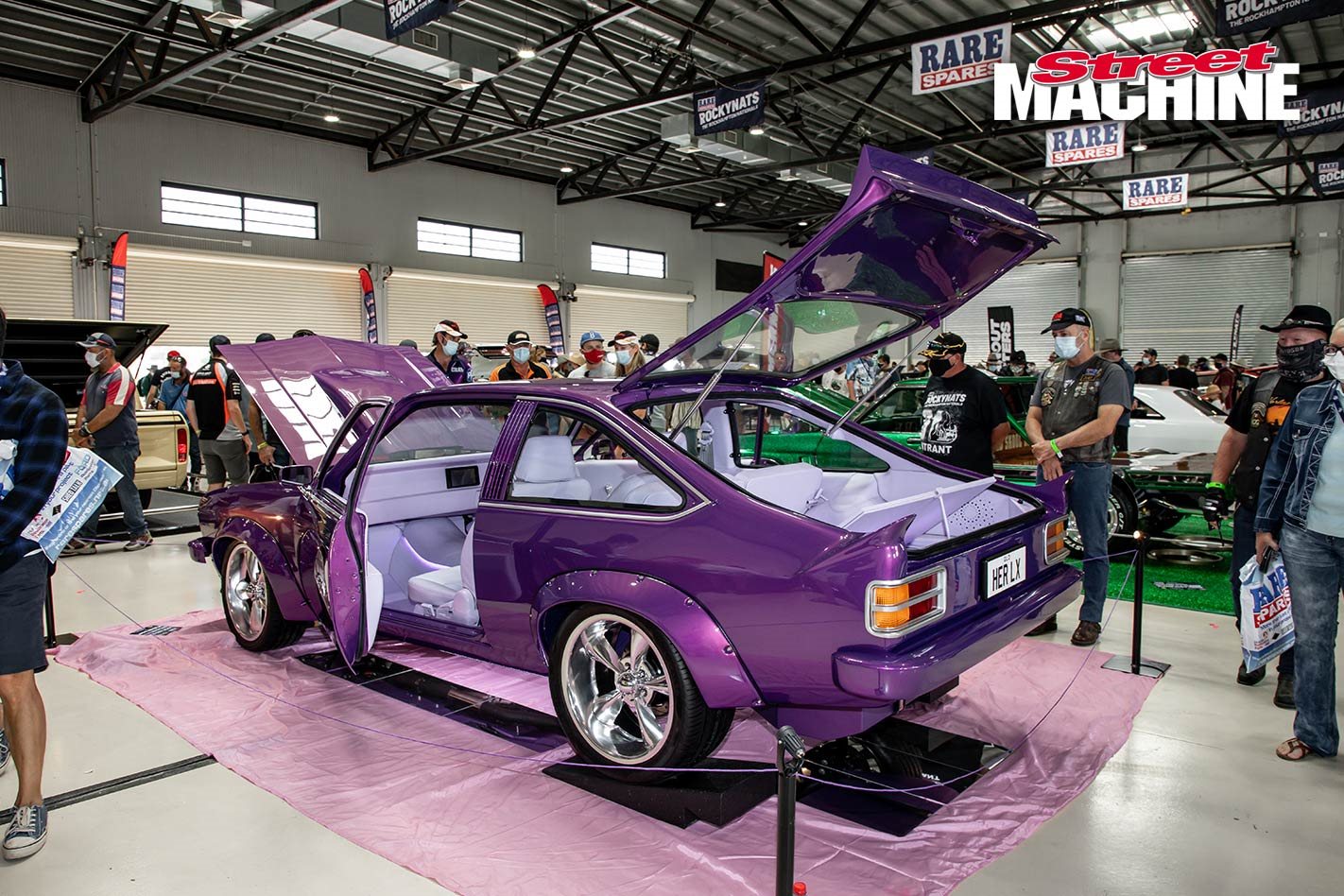 Alongside husband Rodney, you’ll know Judith as one half of the team that’s kept alive HQFORU – Street Machine’s most famous project car. Well, Judith’s own LX has a history to rival even that legendary HQ.

Read next: The true story of HQFORU

The car’s four potl Opel engine wasn’t the V8 Judith was wishing for – the family’s HZ Holden Premier’s 308 was more to her liking – but by 1997 she had a 308 of her own in situ. Well, this car’s been through a few changes since then too. After a glorious run in Street Machine’s Iron Maiden section in 2003, a VR Stateman’s 304 with mild cam and ported heads now does the heavy lifting. 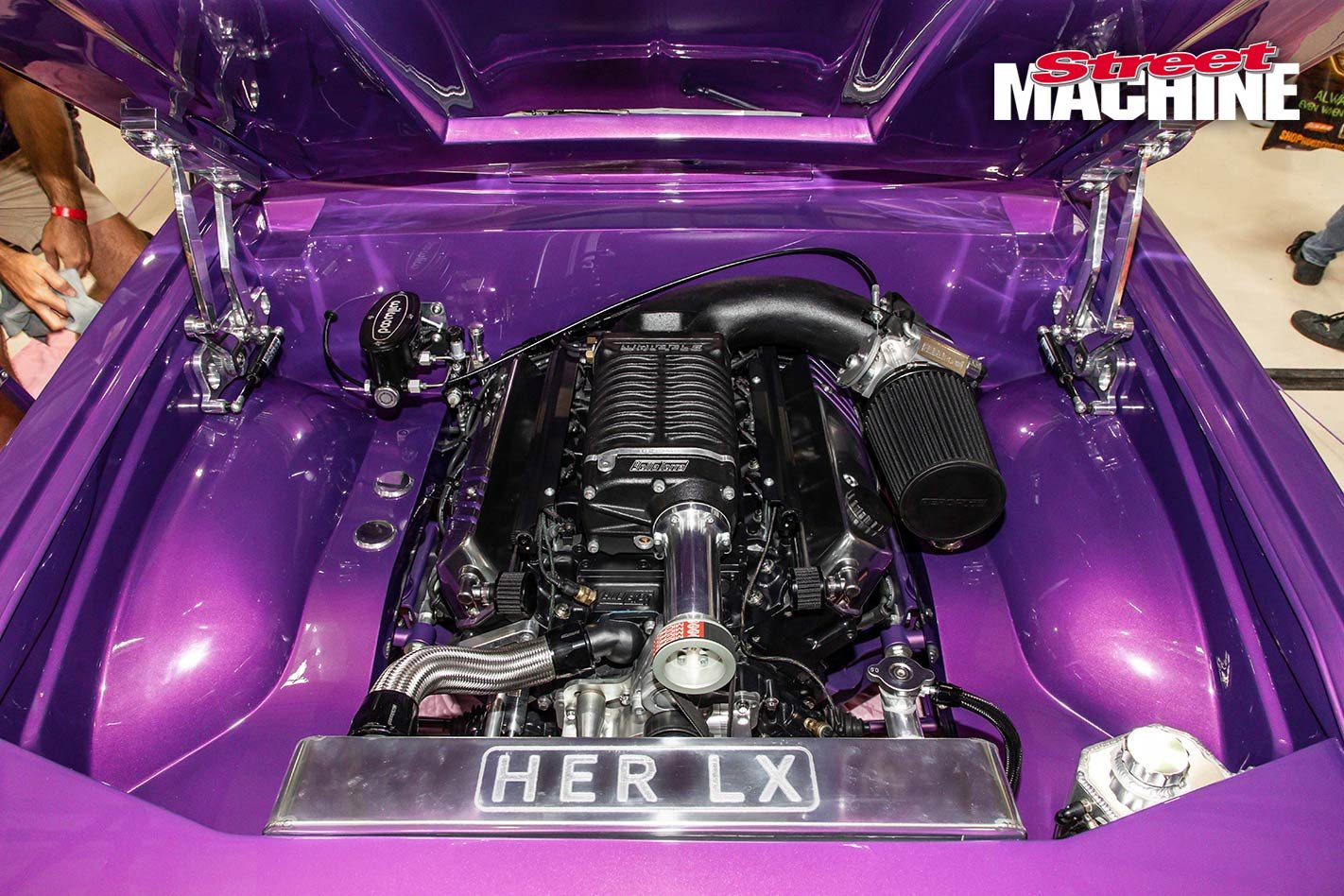 Under the bonnet, the bay’s been smoothed out with a flat firewall, there’s a custom radiator support panel, cowl panel reshape and the wiper motor hidden away. A Yella Terra 2.4-litre Whipple supercharger takes care of induction; ‘box is a Turbo 350 and Strange has taken care of the diff centre.

HERLX’s latest incarnation is two years in the making, with Rodney handling all the fabrications, modifying, body work and paint himself. “I really wanted to take it to Summernats, so we decided to step up to the next level and got for the Elite section,” Judith said. 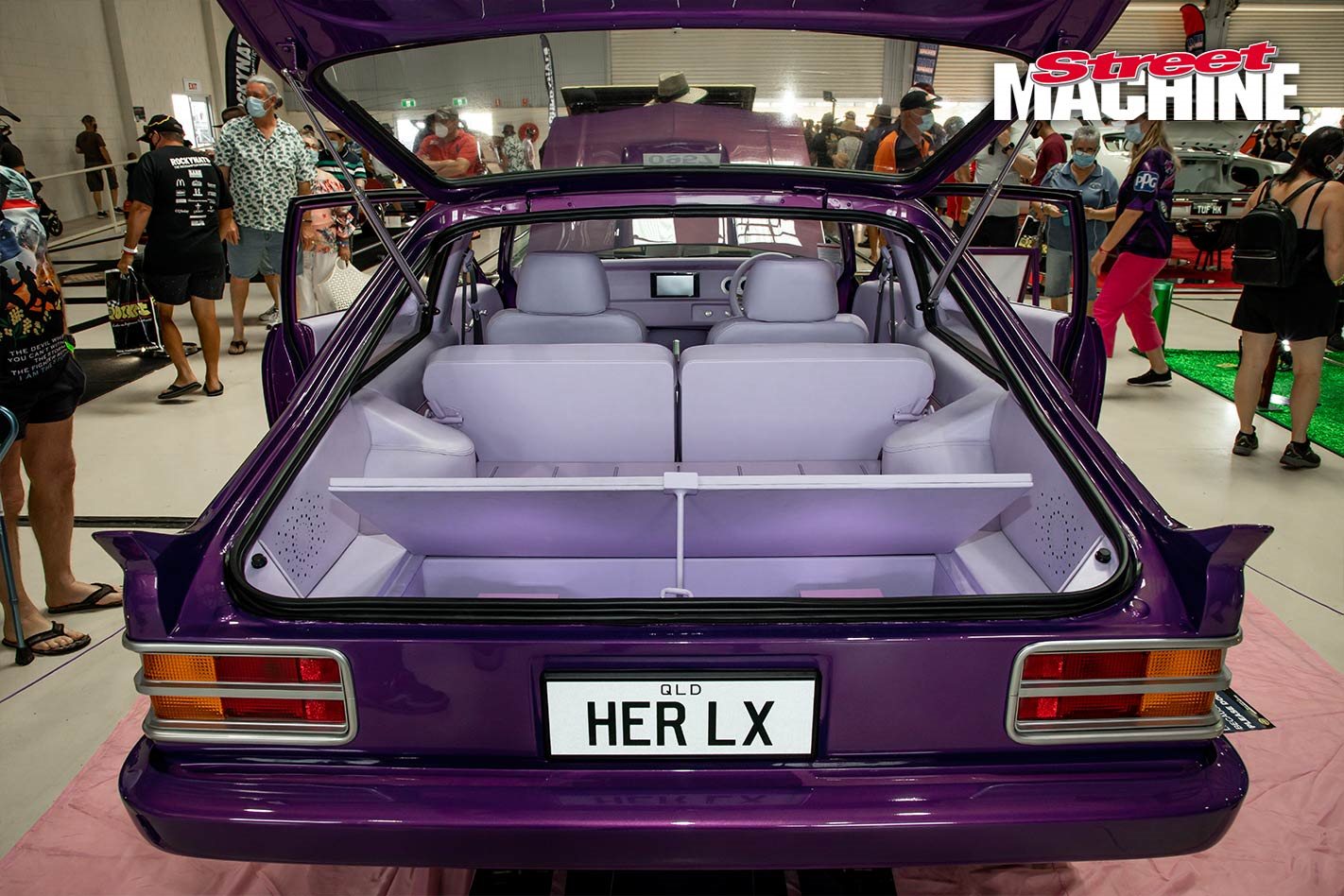 It was only after Rodney started stripping it back that the LX’s chequered history was revealed. “It was either crashed or a bush basher in a previous life; just look how beaten up the rails were,” she said while showing old photos of the Torana’s bomb-cratered underside.

Rodney may insist there are parts he’s still not fully satisfied with, but the level, smoothness and finish looked exceptional for the Rockynats unveil.

Kindig-it Design provided the flush door handles (a really tricky job to fit with a little microswitch and a door popper, Rodney said), the rear spoiler’s been moulded to the hatch lid and quarter panels, while the flares have been redesigned with an extra bolt for the rears. 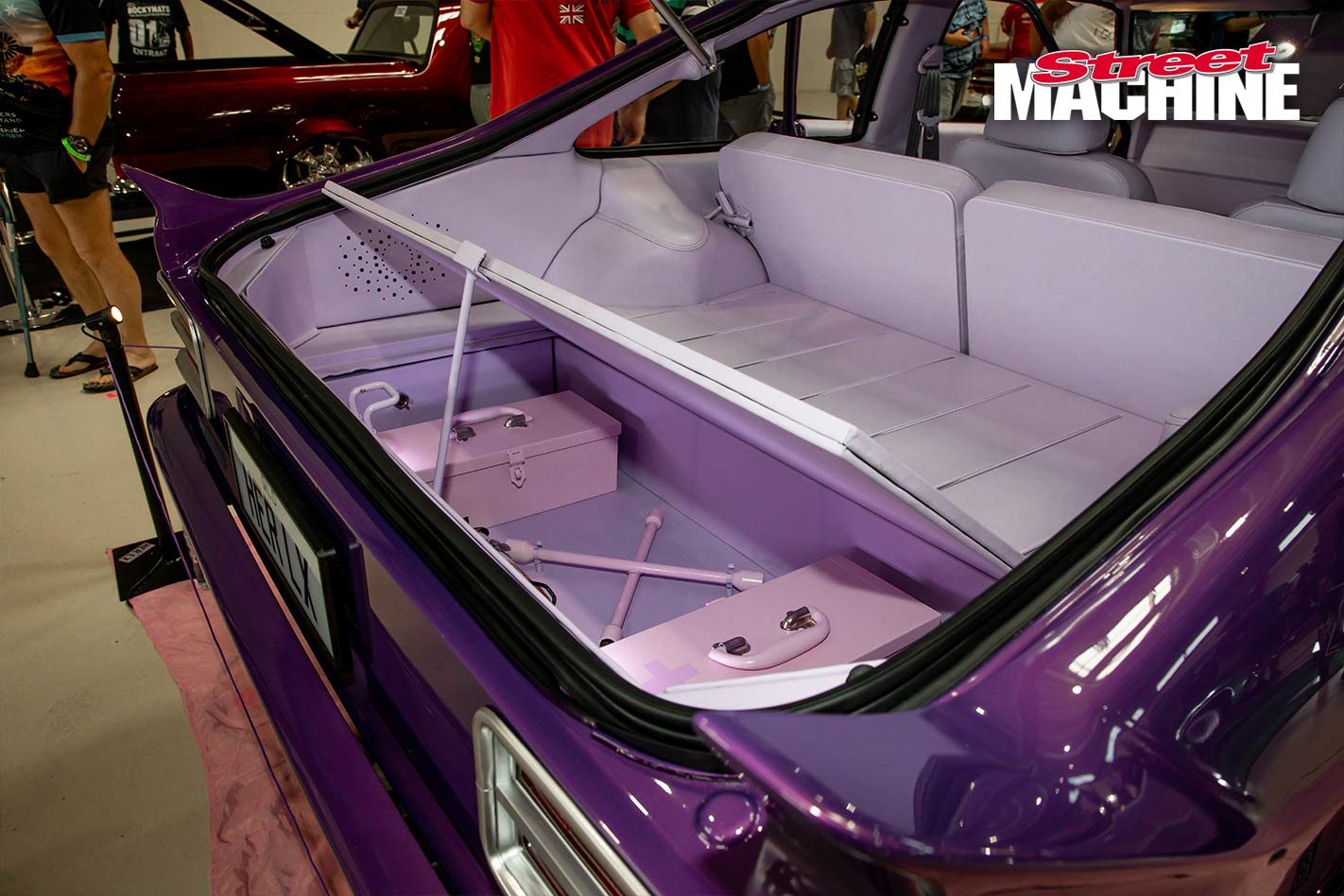 Rodney’s painstakingly realigned the door and guard to minimise the gaps, the scoop’s been moulded into the bonnet and its underneath reshaped, while the undercarriage has been smoothed and painted satin Morpheus.

Ah, that colour. “I love the Holden Morheus Purple, and ended up buying a VE SS Commodore in it as an everyday driver,” said Judith. “You shine a light on it and it has a pink metallic look to it. I just love the girls’ reactions and the kids’ reactions to the car.”

To avoid a Morpheus Purple overload, a lighter lilac was picked for the custom leather upholstery. Up front are reshaped Mitsubishi Triton seats, while the Torana rears have also been reshaped and all coated in that luscious lilac. There’s a custom fibreglass dash, Dakota digi gauges and billet steering wheel, door pulls, handles, door locks and dash knobs. It’s all rather chic, don’t you reckon? 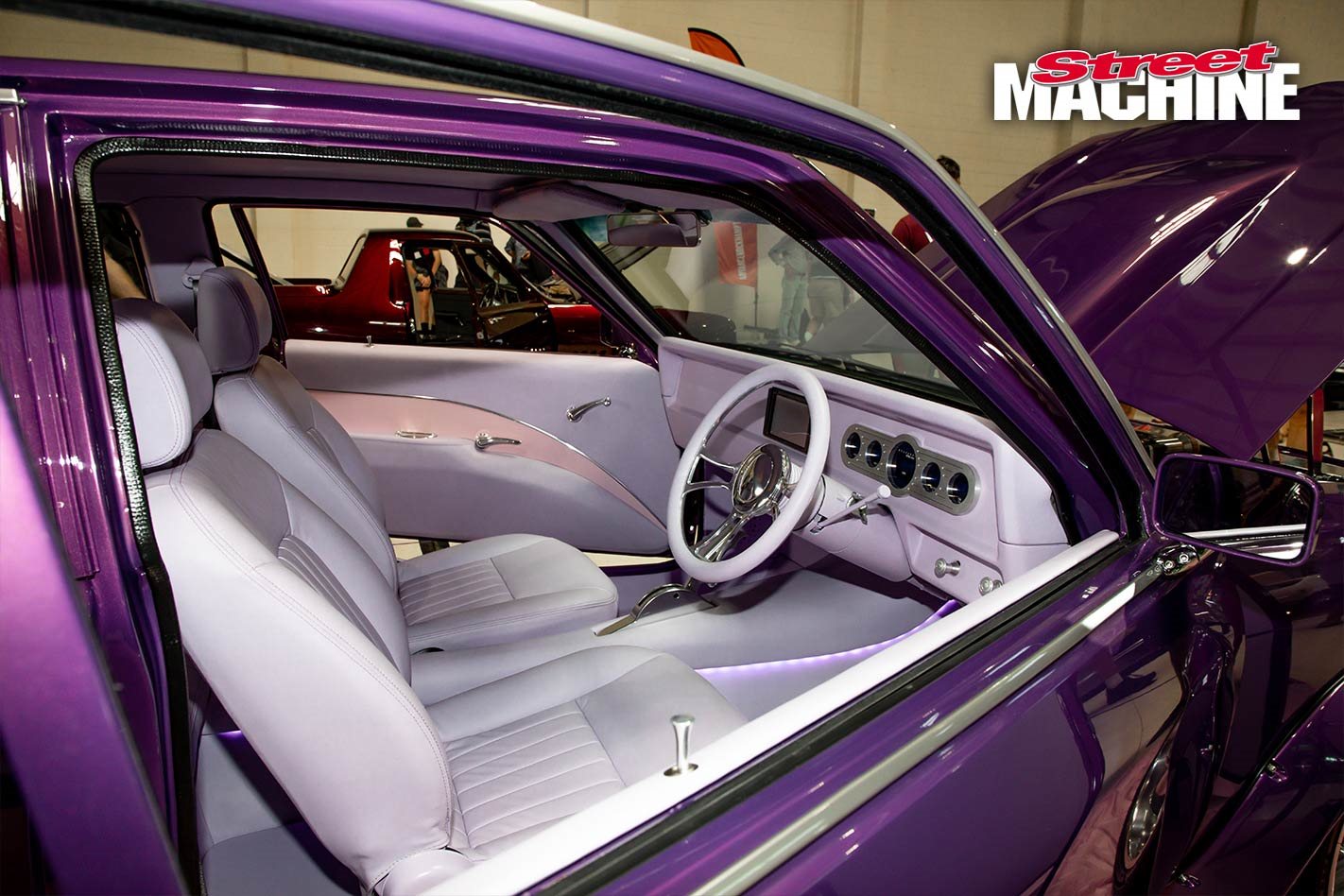 While Covid scuppered a Summernats reveal, Judith and Rodney have probably preferred unveiling it at Rockynats. “There are so many unveils at Summernats you can kind of get lost and daunted there,” Rodney said. “We’re really pleased with the reaction to it here, and we’ll do shows for the rest of the year and take it to Summernats.”

Judith plans to enjoy it as a street car after that, and the current 442hp on the dyno “running just 12 lbs and no timing” will make it easy to live with. If a drag strip comes to Townsville, closer to their home, HERLX may find a new life ripping through its tyres too.

Then, who knows what the next 30 years will bring?