THE third annual HK/T/G Holden Drag Day at Willowbank Raceway last weekend was a hoot. With a total of 123 cars through the gates and around 70 of those racing, the field was stacked with every HK/T/G body type you can think of, from all over Queensland and interstate. Such was the enthusiasm for the event, five cars came up from Sydney and one came down from Cairns.

Put on by HK/T/G tragic Adam Reeves, the grassroots-style event welcomed anyone and everyone. It didn’t matter if you’d never raced before or had the fastest car on earth, it was just about getting likeminded enthusiasts together for a bit of fun. There was still a degree of competition involved though, with awards for quickest class ETs, best wheelstand and best burnout. Luke Kestle won the trophy for fastest ET in the Outlaw class with his bad-arse turbo small-block Chev powered ute which ran a best of 8.2@165mph, making it fastest car of the event. The car is getting faster with every outing and will surely slide into the seven-second bracket in the near future! 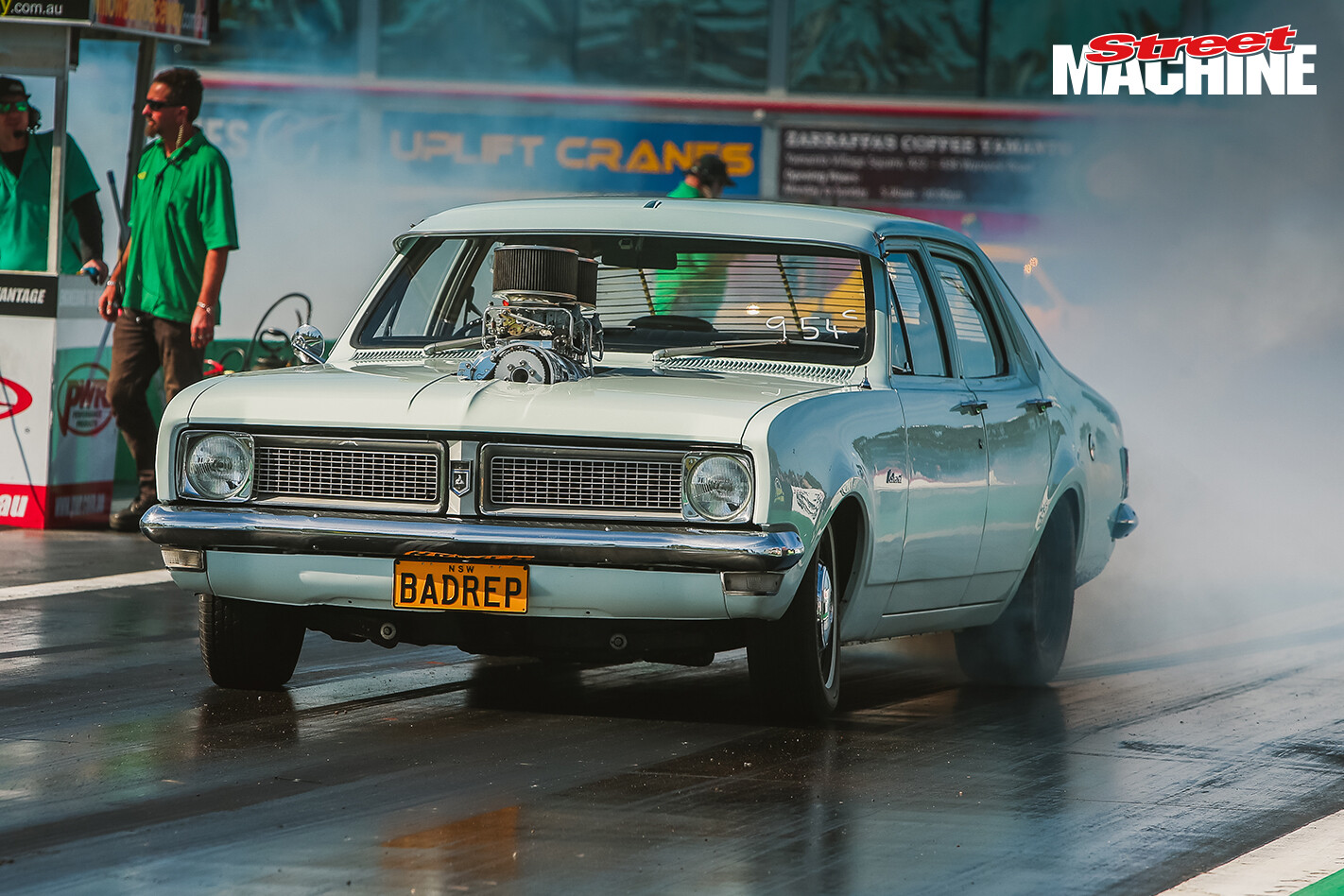 One of the toughest cars at the event had to be Pete Robins’s blown BADREP HG Belmont from NSW. Pete last raced an eleven-second streeter around 17 years ago and was keen to get out on the track again. The first run saw a 10.60@117mph, hitting the limiter. On the second run, she went bang.

“It felt strong until the shifter neutralised going into top gear and zinged the engine. I saw the tacho hit 9000 and found top gear as the engine blew, but I stayed into it as long as I could; I didn’t want to lose my call out race!” he said. With oil and coolant blowing all over the windscreen Pete went through for a 10.7@117mph and won the race. “The clean-up crew gave me back a pushrod, half a lifter, a bit of piston skirt and a chunk of block, but the engine failure couldn’t spoil the weekend.” Nigel Davidson made the long trek south from Cairns with his Monaro race car. “The car usually runs a 9.38@142mph, but first run out we PB’d with a 9.27@143mph and then backed it up with three 9.28s at 143mph.” Nigel reckons it was well worth the 22-plus hour drive down and he’ll be back next year with a revised setup, aiming to go even quicker. Joel Blake won the award for best burnout in his 383ci small-block powered HG Monaro. There was also an award for the best wheelstand, and despite a number of cars getting their wheels up, it was hard to beat Brett Wills in his 434ci HT Premier.

Event organiser Adam Reeves was stoked with the turnout. “Honestly we were blown away by the popularity of the event, we had 70 KTG’s racing and another fifty in attendance,” he said. “We’ve already booked in the fourth annual event for next year at Willowbank on June 23, and we’re looking at holding an event at Sydney Dragway and in Melbourne.” Steve Dow’s HT Kingswood wagon runs a 383ci small-block Chev and column-shift Powerglide combination and punched out a best of 12.1@112mph on the day 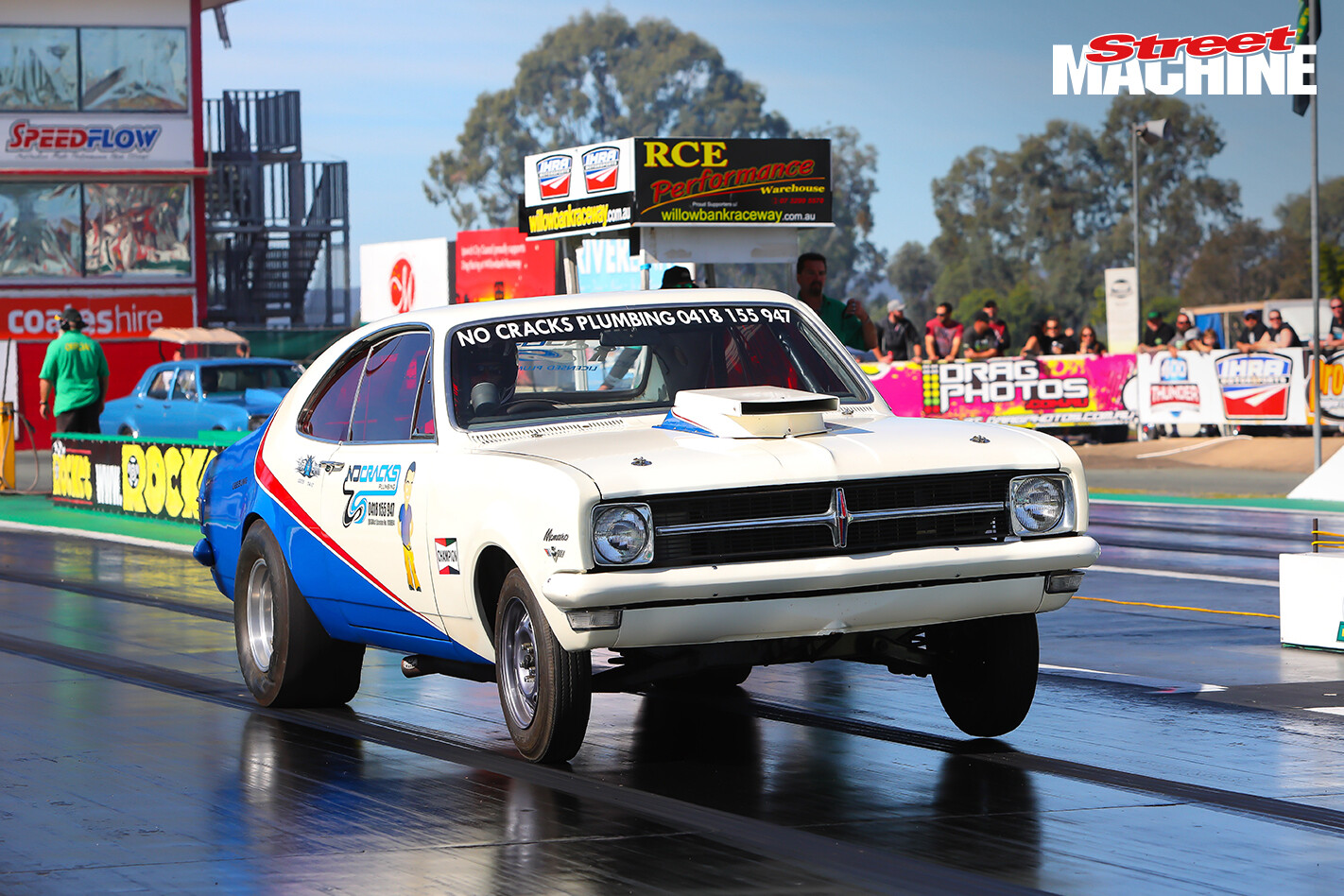 Ray Edwards’s HK Monaro has a racing pedigree dating back to the days of Surfers Paradise Raceway. This car competed at Willowbank’s first-ever meeting in 1985! Its best on the day was a 11.3@118mph Joel Blake was the deserving winner of the Best Burnout award in his CRAYZE HG Monaro – otherwise known as King Brown. The HK-T-G day was the first time the 383 Chev-powered HG has raced and it pulled a best of 11.34@119mph on street tyres, driven to and from the track Mick Olsen’s vinyl-roofed and 427 small block-powered HT Monaro, HTFU, ran a best of 10.07@133mph and did it in full street trim, including mufflers and pump fuel 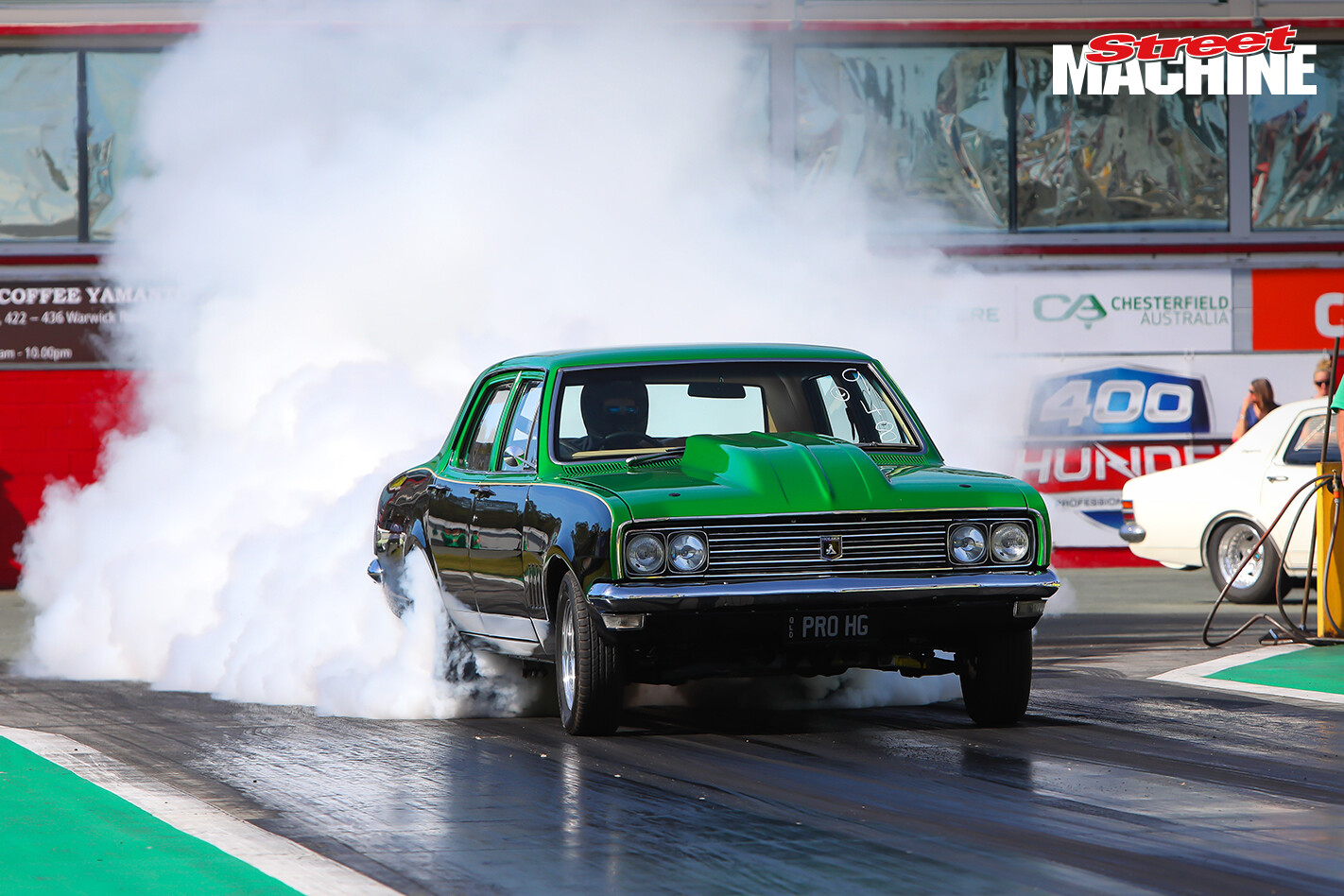 Adriano Rosson’s PROHG gave it a fair shake in the burnout stakes and managed a best of 10.660@125mph on the track thanks to a 406ci small-block Chev 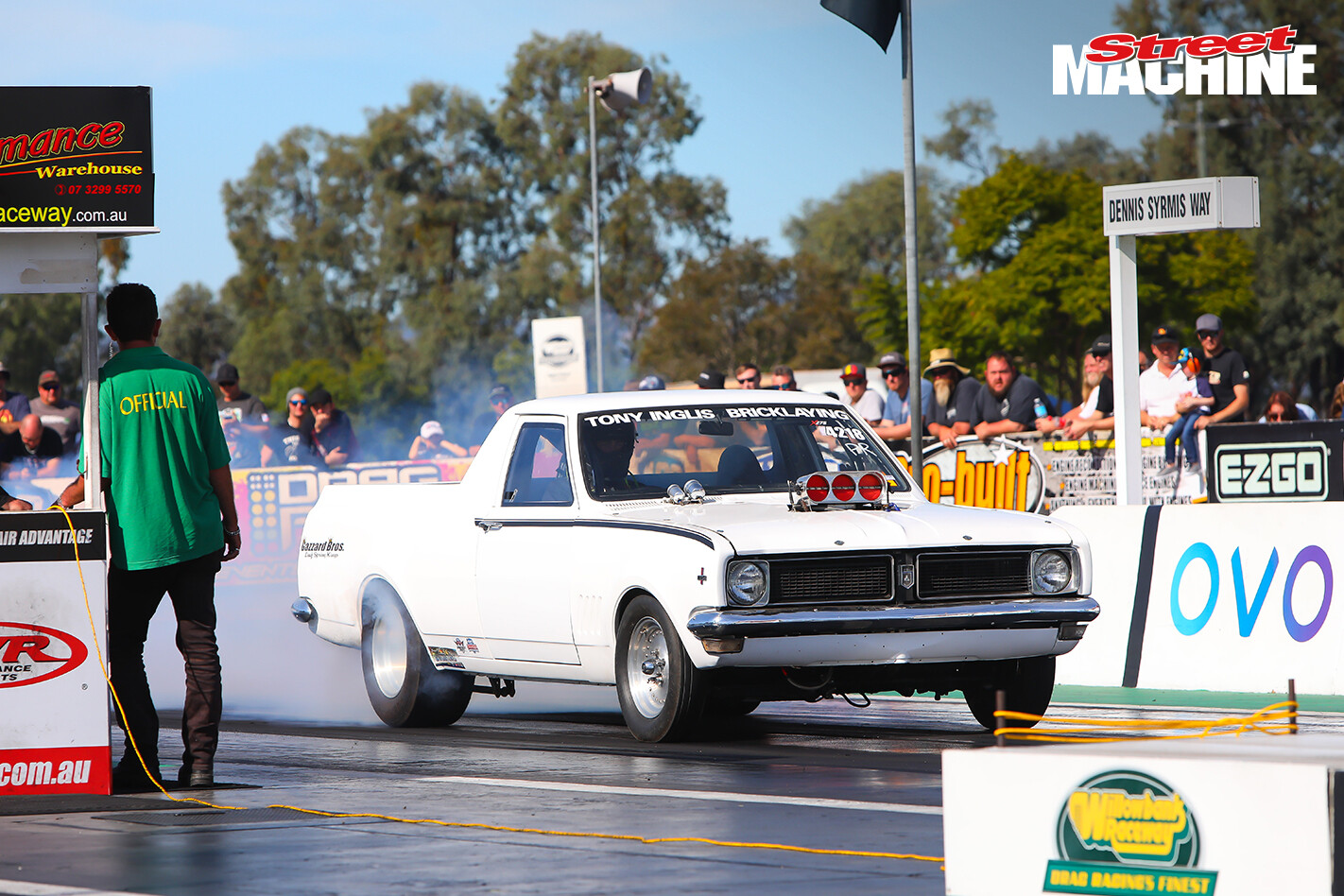 Tony Inglis’s ute is a monster, packing a mechanically-injected 555ci big-block. The ute ran a best of 9.27@143mph and looked good doing it Juan Kudnig’s HT Holden is storied street/strip car, having won three Super Street and two Super Sedan ANDRA Championships in aspirated form during the 1990s. Juan upgraded to a Vortech blown, water/air intercooled and EFI set-up in the early 2000s and is still kicking butt! He ran a best 9.62@145mph Brett Balfour drove his 1HK400 up from Sydney and ran a best of 11.6@121mph. Formerly known as MASHER, the Monaro recently scored a birthday, which included a new 434ci small-block Chev topped with AFT heads and a Pro System carb Michael Zeckomske’s bright yellow HG Kingswood also copped plenty of love in the lead up to the meeting, with a rebuilt 400ci Chev, a six-point rollcage and mini tubs to accommodate the 275 radials out back. The work paid off with a 10.0-second pass off the trailer 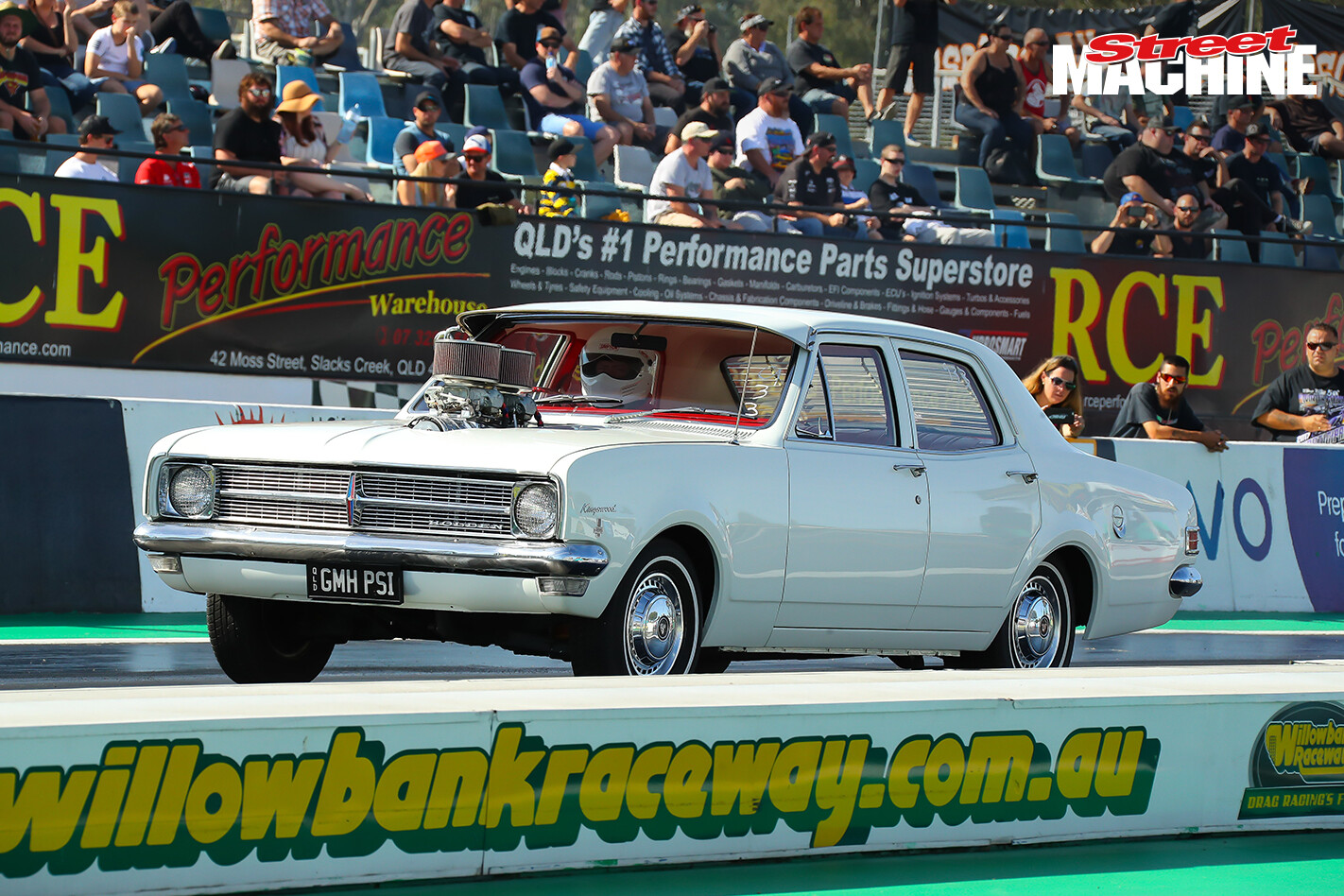 Steve Carkeet’s GMH PSI is pure cool! Powered by a decade-old blown small-block Chev combo, the engine cried enough at the HK-T-G Day, but not before Steve ran an 11.7-second pass on 185 whitewalls, claiming the win in the Wicked Whitewall class 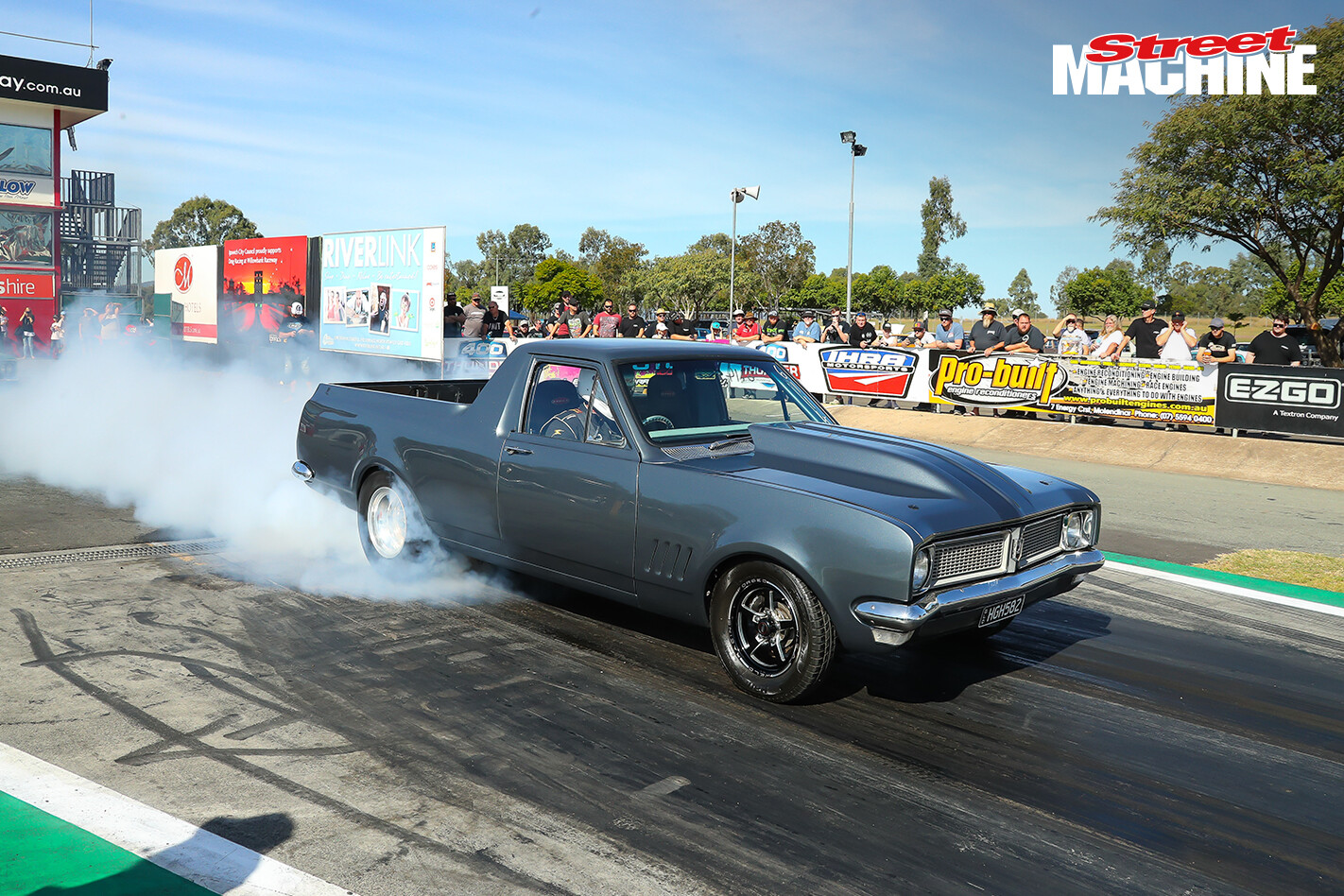 Scott Yarrow’s HGH582 ute won the Quickest ET at last year’s event and this year set a PB of 9.70@139mph. As the plates suggest, there is a 582ci big-block under the bonnet