MOTOREX has long been Australia’s premier indoor car show, and it’s always a great opportunity to get up close and personal with modified rides that are brand new, cool or otherwise interesting. Here are 10 of our favourites. 1. STEVE BELLIA’S XB FALCON SEDAN
UNVEILED to the world as part of the House Of Kolor Inauguration, Steve Bellia’s BFAT is a tough piece of kit. Powered by a 454ci Dart-blocked Windsor spitting out 754hp, it’s a street car, but something tells us it might see some action at the track. With a knockout stance and trick Galaxy Grey over white pearl duco with a Candy Apple Red stripe, it’s a real looker, too. “It’s been my dad’s car from brand new, and it’s an original GS,” Steve explained. “He took it off the road in the year 2000 when he bought his new car and we left it unregistered. Then I offered to rebuild it. We went a little bit silly. I was originally going to build it as a drag car, but once we did all the fabrication and Mick [from Mick’s Custom Interiors] did the trimming, we thought it was too nice to just put a bodgy paintjob on it.” THE subject of a 10-year father-and-son build, Rowan’s Candy Apple Red roadster dubbed ‘Money Pit’ was another of the Inauguration cars at MotorEx. “It started as a pick-up but we decided midway through the build to get rid of that idea and go to a roadster,” Rowan explained. “We went and got some rear quarters, but because the chassis was extended it made it a lot longer, which gives it that rake.”

It’s powered by a 302ci Windsor backed by a C4 auto, both of which were fished from a drag car, so it should have some herbs. “It’s probably a little bit of overkill for the car,” said Rowan’s son John, who also suggested that they might later bolt a blower to the little Windsor to up the ante even further. “We bought a set of rocker covers and they went chrome, and from there we went berserk and everything had to be polished or chromed. We just can’t wait to get it on the road.” 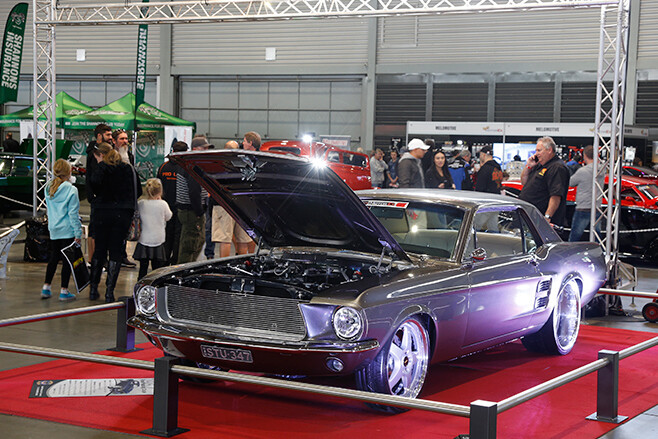 “I PRETTY much built this thing aside from the paint and four-link and tubs. It’s a garage build,” said Stu of his freshly completed Muzzy. “The concept was to make it something different. There are a lot of these cars around and they’re all pretty much the same colour; I just wanted to make it mine.” 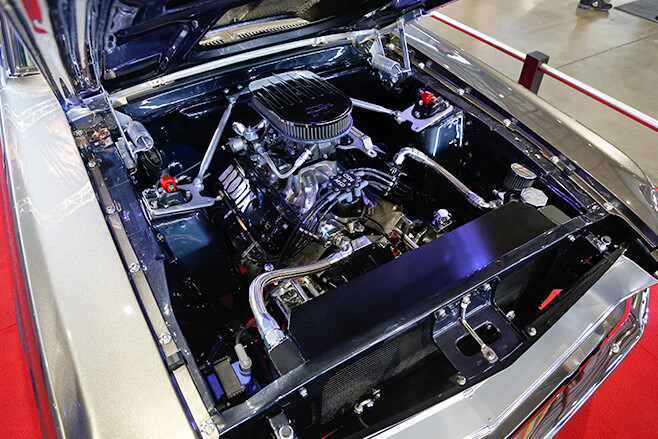 The staunch driveline consists of a 347ci Windsor, C4 auto and sheet-metal nine-inch, with 19- and 20-inch Simmons wheels front and rear. It’s mini-tubbed with custom four-link rear suspension, and sprung with Viking coil-overs. The cabin is wonderfully sumptuous, with cream Nappa leather, Dakota Digital gauges, and a Billet Specialties twirler. RESPLENDENT in bare metal on the American Legend stand at MotorEx, ‘Havoc’, currently in the build at Rides By Kam, looks like it’ll be a pro touring masterpiece upon completion. Powered by a 572ci Hemi aided and abetted by a direct-driven F3 ProCharger, the team is shooting for somewhere north of 1500hp. Yep, that should be adequate.

The wheels are 20x15 on the rear, so it’ll have quite a grip on the earth, and the ground-hugging stance really is something to behold. The extensive fab work continues in the interior, with hand-built sheet-metal door trims, dash, tunnel and floor, and the car is loaded with gadgets that will all be controlled via an iPad. Definitely one to watch. 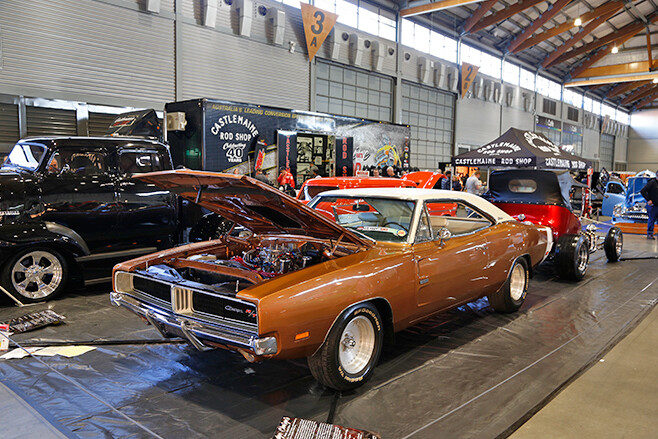 IMPORTED to Australia in 2012 by its third owners Jason and Renae, this Charger has an intriguing history. In the 70s, the car was fitted with a genuine 1970 NASCAR 426ci Hemi by its previous owner, who at the time worked for a gentleman by the name of Ray Nichels – former head of Chrysler’s NASCAR program.

While the engine’s original intake is no longer fitted, it retains the genuine X-Code Chrysler Racing block and heads, and now runs a single 1050cfm Holley carb and direct-port nitrous system. A fascinating and brilliantly preserved piece of Mopar street machining history! SPOTTO a ’57 Chev! Con Karabatsakis’s Chevy coupe ‘Stella’ was a stunning piece of kit, picking up a gold medal for Interior in the Street Elite Showcase at MotorEx. 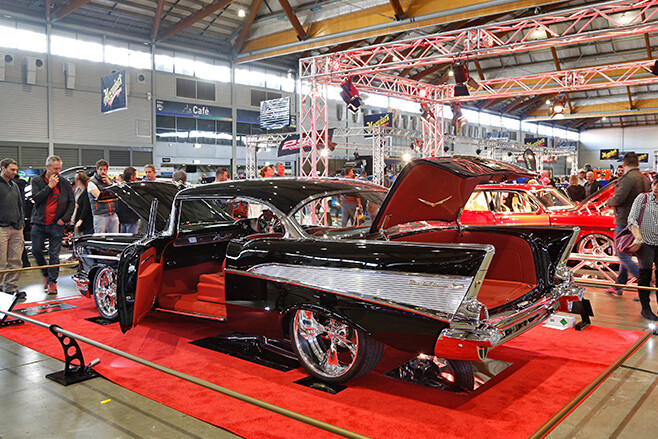 Con himself took care of the bodywork and laid on the deep gloss-black Glasurit duco, and it’s fair to say he did an impressive job of it. The car is powered by a fuel-injected 502ci big-block Chev and rolls on Billet Specialties wheels – what a stunner. 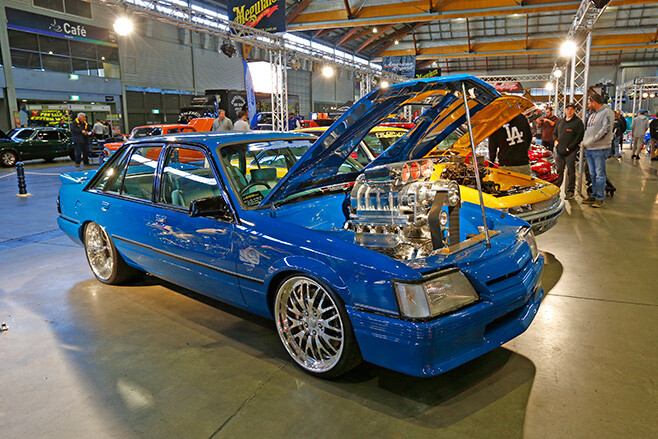 BLUE Meanie replicas aren’t exactly thin on the ground these days, but this particular example, owned by Peter Kulakovski and built by OC Motorsports in Sydney’s west, stands out from the crowd.

Most notably, the car has an exquisite engine bay, which houses a BG Engines-built 408ci LS, topped by a billet 8/71 blower with a Joe Blo Speed Shop EFI set-up nestled inside the hat. Showwheels billets measure in at 20x12in on the rear, and the car has a killer stance. Keep an eye out for a full feature in Street Machine in the not-too-distant future!

JUST getting a start in the Superstars division at MotorEx means you’ve got yourself a pretty special car, but to pick up a medal and a spot in the coveted Super Six is really worth writing home about.

This ’32 pick-up, dubbed Tequila Sunset, is the latest in an array of noteworthy cars by Rick Werner. It qualified for Superstars at the recent Queensland Hot Rod Show, and backed it up with a silver medal for Interior & Rear Compartment and a Super Six placing at MotorEx. 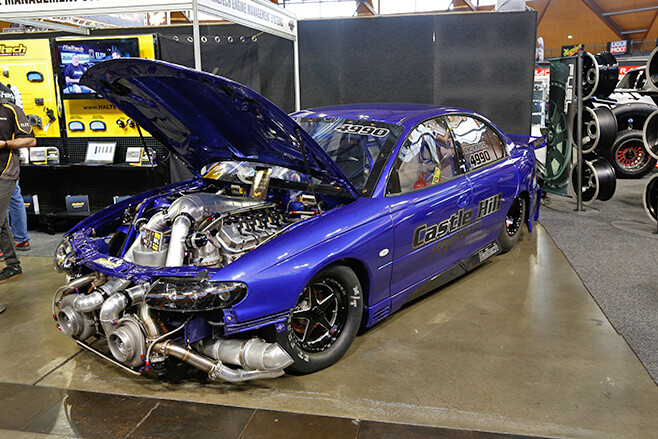 The 540-cube BBC wears Brodix heads and will run up to 50psi through the 90mm Garrett turbos living in the front bar, which driver and tuner Dale Heiler estimates will be good for 3000hp. 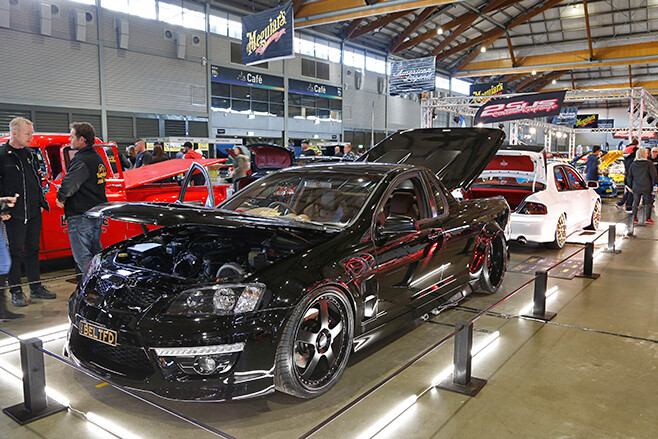 LUKE Bailey from Narrabri showed off his V3 ProCharged VE ute, sporting sweet biscuit-coloured suede trim and pumped-out wide-body guards for a big dose of attitude. Ultimate Metalworks in Sydney made sure the 22x12 Simmons FRs fitted, and got it riding low on a coil-over front-end and TSS airbag rear.