AFTER the near-apocalyptic conditions in Canberra during Street Machine Summernats, it was nice to return to the clear blue skies and relatively mild temperatures of Perth for Motorvation 34 – the longest-running event of its type in Australia. Yep, it’s been going a full year longer than Summernats, but unfortunately has been in a holding pattern over the past few years.

For a long time, Motorvation was a three-day extravaganza that attracted rave reviews from interstate visitors and locals alike. Things changed in 2016, when the long-term management team of Perth Motorplex – led by the Miocevich family and Kevin Prendergast – called it a day.

Since then, the Motorplex has been run by by VenuesWest, a government statutory authority that reports to the State Minister for Sport & Recreation.

VenuesWest pulled Motorvation back to a one-day event while the government sought a new operator or even buyer for the venue. Four years later, the search continues, and Motorvation has remained a one-day deal for now.

Nevertheless, I was impressed with the quality and quantity of cars in the staging lanes, and it was great to see the likes of Gareth Lougher’s HR and Kevin Mantach’s amazing ’50 Chev coupe back after their successes at Summernats.

We’ll have full coverage in the March issue of Street Machine (out 27 February), but for now, here’s 10 of my favourite things from Motorvation 34. 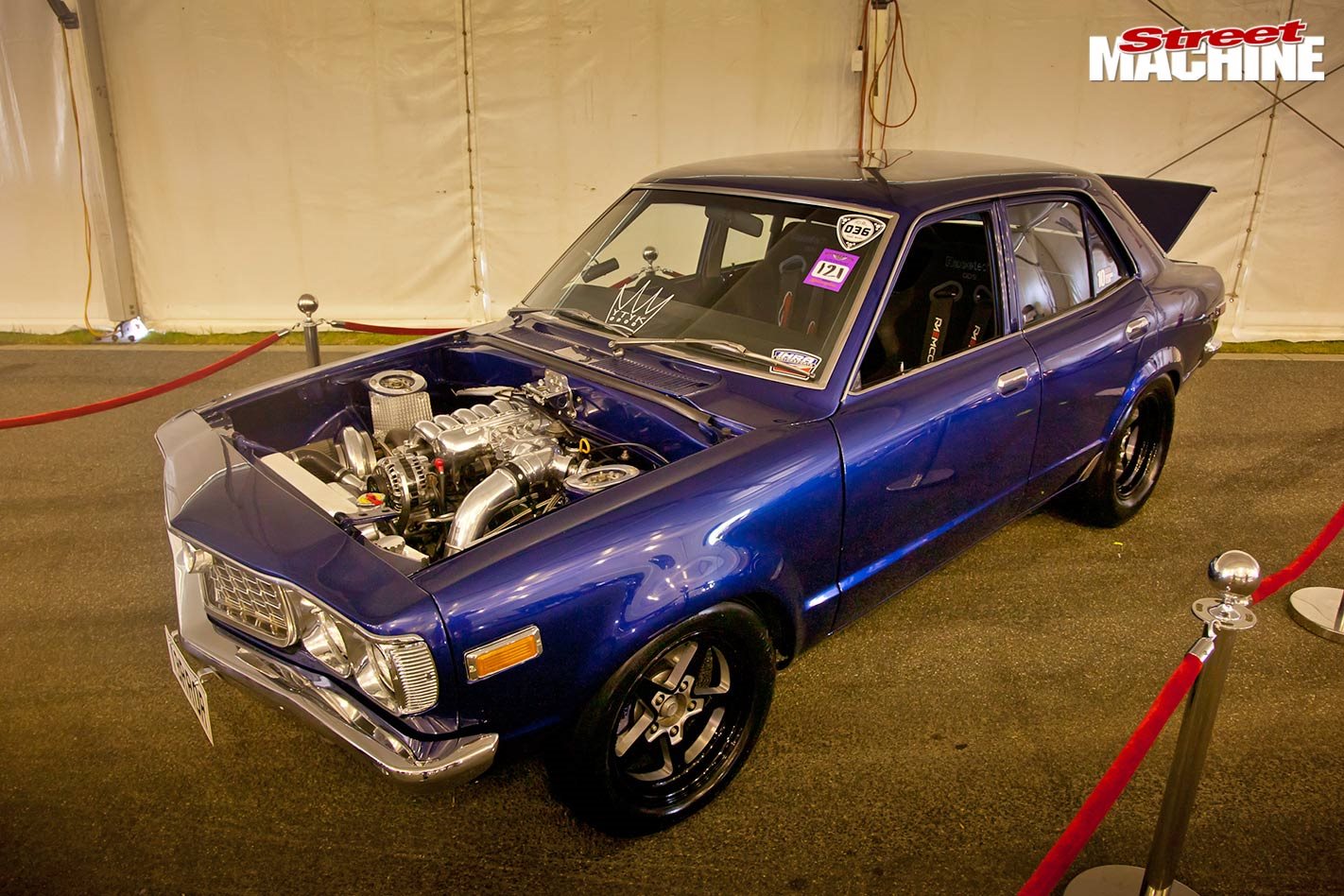 1. Andrew Demier dubbed his ’74 RX-3 T3RROR, and he’s dead right; this thing will be a terrifying sight once he unleashes those 978hp onto the skinny little ET Streets. To make all that grunt, there’s a race-spec triple-rotor 20B from Green Brothers with a 72mm BorgWarner turbo bolted to it. To keep the hefty diet of E85 supplied to the six 1600cc and three 2400cc injectors, there are twin Bosch 044 fuel pumps and a Carter lift pump. A Tremec TKO600 five-speed and Strange nine-inch with 35-spline gun-drilled axles round out the driveline. If all goes to plan, the car should be capable of high seven-second passes. 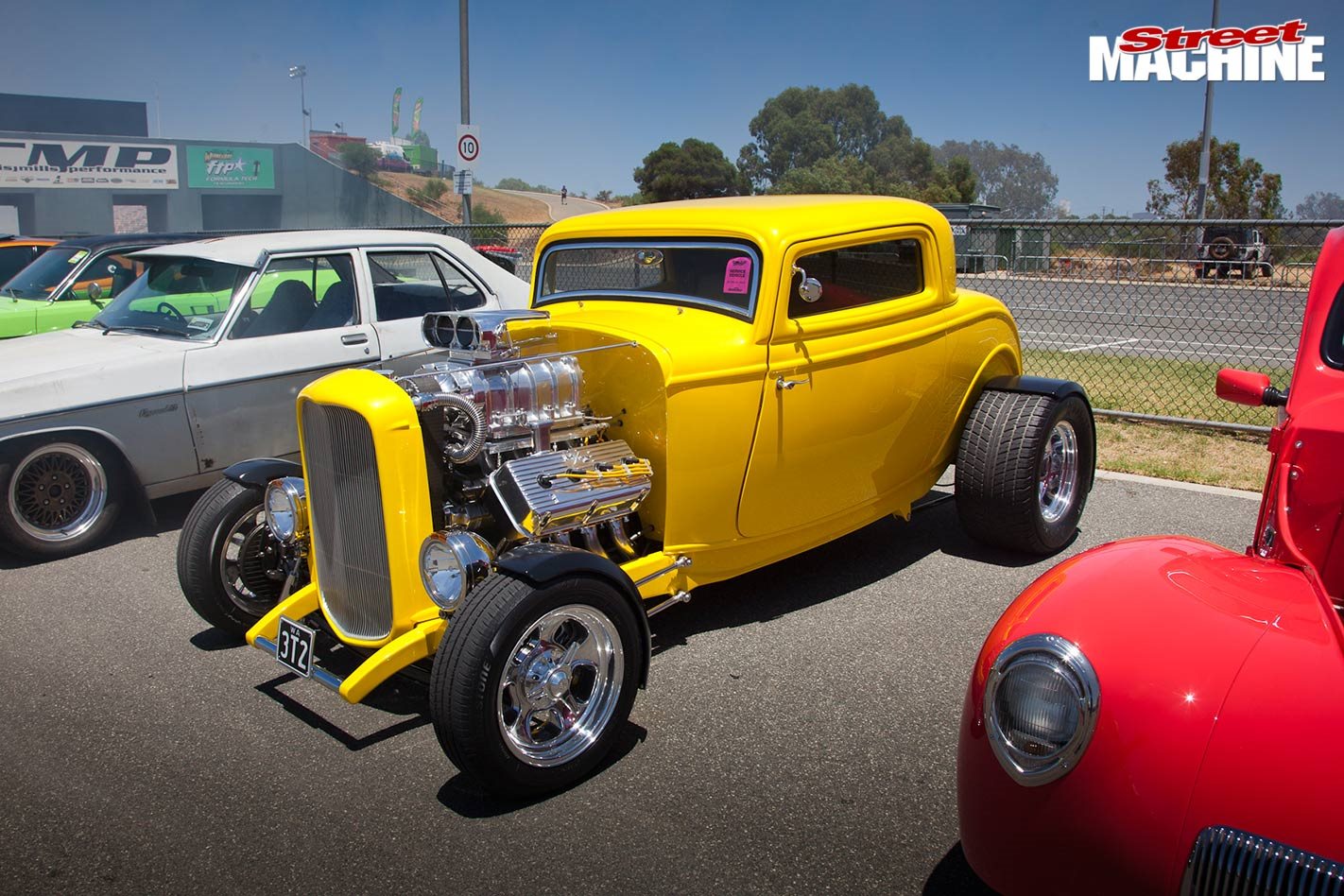 2. It was great to see Chris Bitmead’s ’32 Ford coupe out and about and in the sun; the pearl yellow paint looked absolutely stunning. We had the Hemi-powered beast on the cover of SM Hot Rod 2006, and it looks just as good today as it did back then. 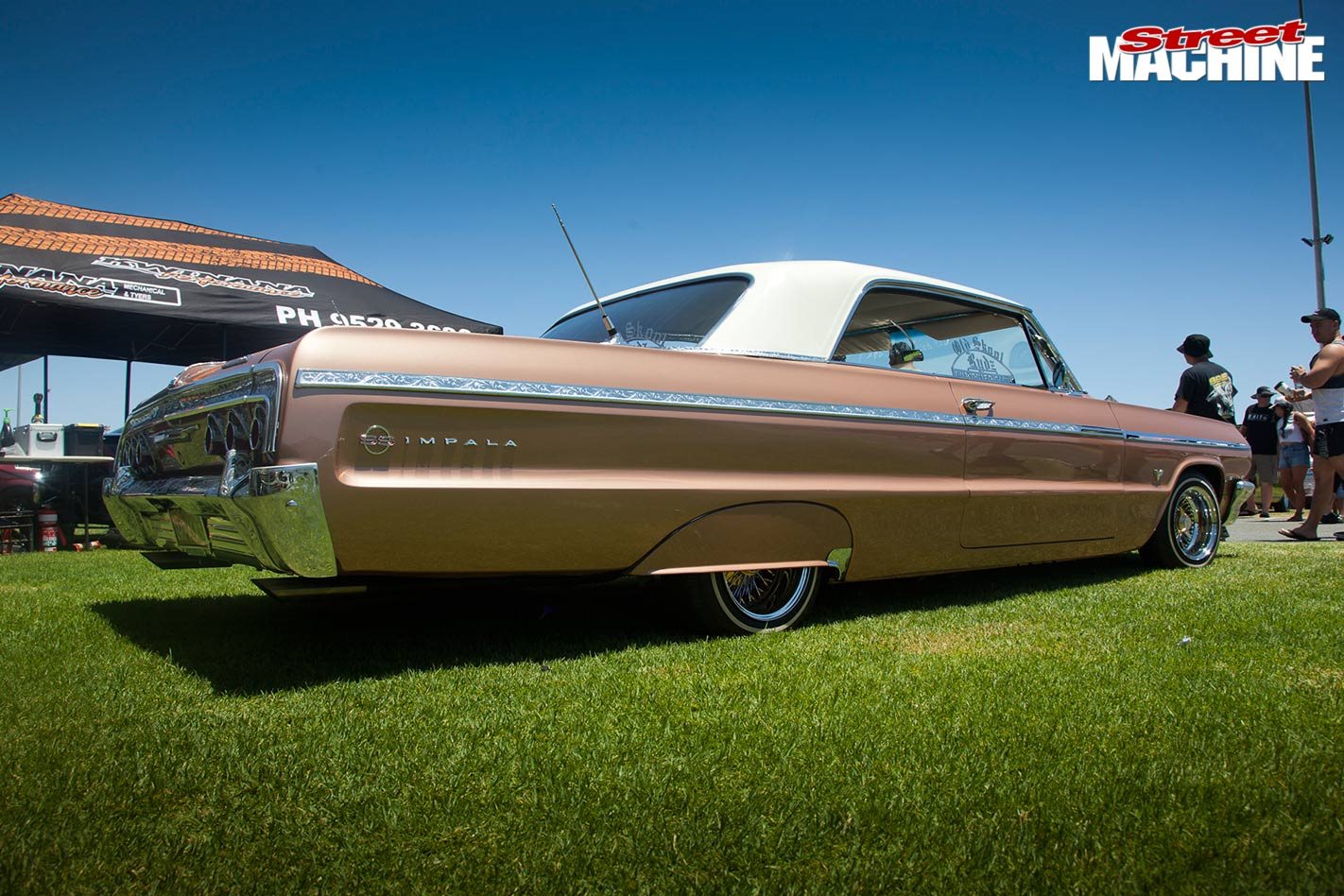 3. UK expat John Royce is not your typical lowrider owner. After having a bit of a chat and checking out the $45,000 (so far) of engraving John has had done to his ’64 Impala, I asked him how he got into the scene, given that lowriders aren’t that prevalent in OId Blighty. “I was into sound-offs and big audio systems, and I needed a suspension system that could handle all the extra weight, so I got into hydraulics,” John said. The car was built as a beautiful tribute to his mother Catherine, who passed away not long after he moved to Oz. 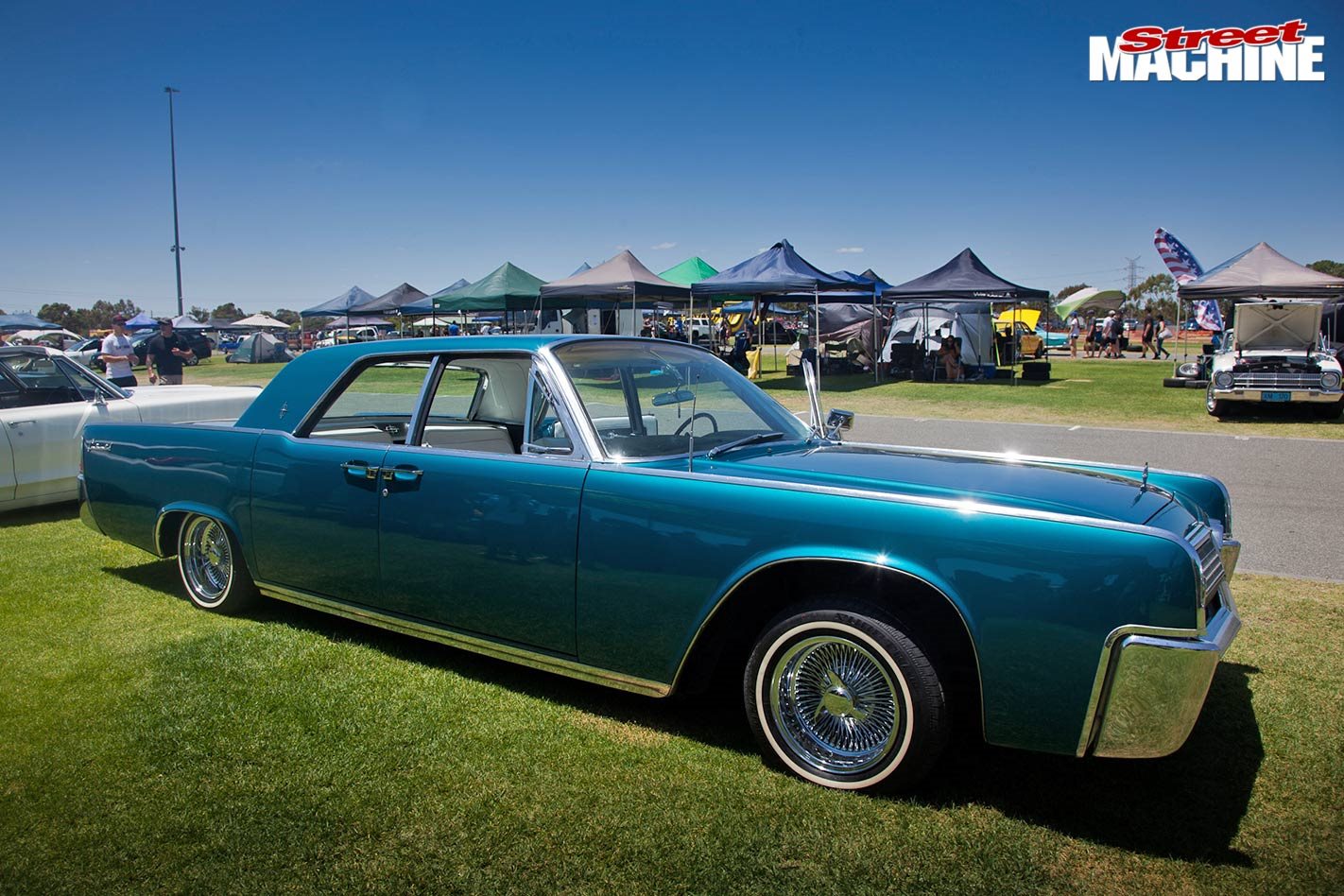 4. Mike ‘Bigee’ Bigwood had planned to bring his ’63 Lincoln to Motorvation last year, but just 30 minutes after getting his acceptance email, a car crashed into the rear of the Lincoln, damaging both rear quarters. After spending hours on the phone trying to track down parts, Bigee ended up jumping on a plane to the US and cutting a pair of quarters off a car in Fresno, California. He brought them back as oversized luggage and spent three months fixing the damage and repainting the whole car. It helps when you’re a panel beater by trade. The 14-inch wires are a change from the usual big-diameter wheels that many people run on these cars. 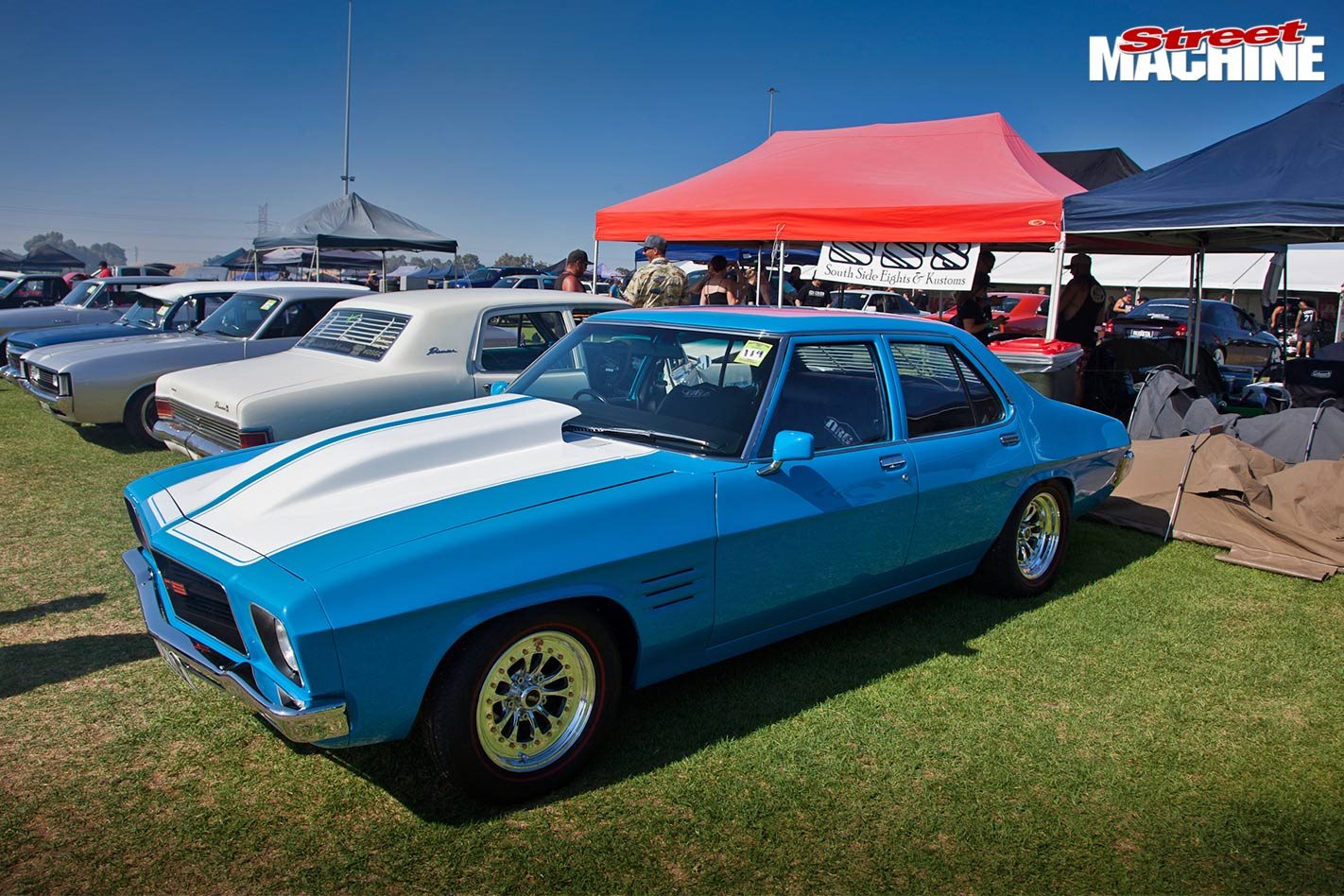 5. It might say DIRTY Q on the plates, but Simon White’s HQ sedan is about as clean as they come. It recently had a makeover that took just five months, which Simon said was smooth sailing because he made sure he had everyone booked in and ready to go on the car. The Toyota Eclectic Blue has a really nice pearl finish, and that reverse cowl hides a 427ci SBC that makes 513hp at the tyres and powers the car to regular 10.5-second timeslips. 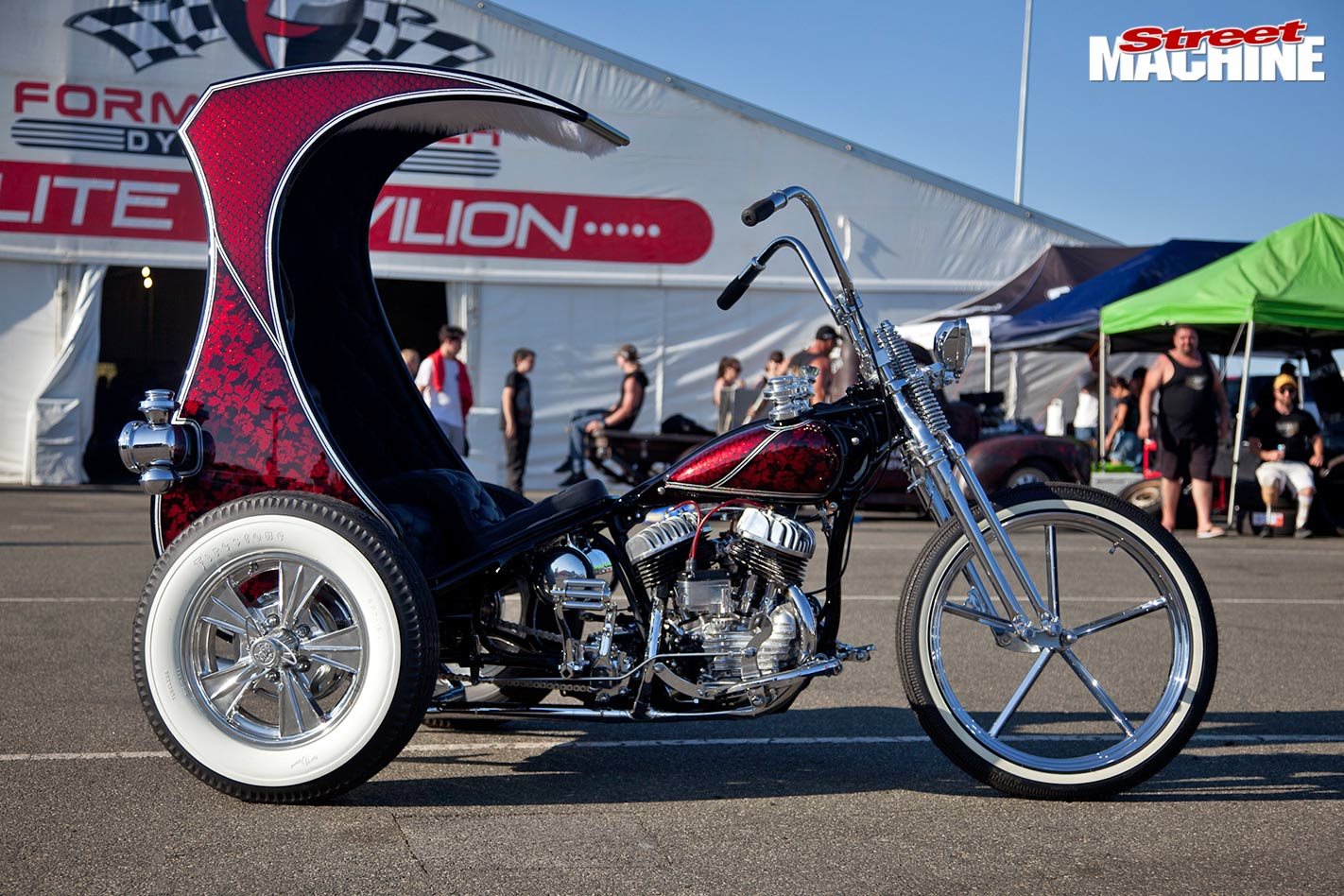 6. I’d seen Ben Forster’s ‘Zeitgeist Killer’ a couple of times before, but never out in the full sun. The custom paint by Stewart Parris really came alive and the details and techniques used are amazing. In case you’re wondering, yep, it’s a genuine Harley-Davidson Servicar, but the body is completely handcrafted from steel and it rolls on Radir tri-ribs and wide whites. This bike is entirely the result of drinking too much red cordial as a kid and too much Melbourne Bitter as an adult. 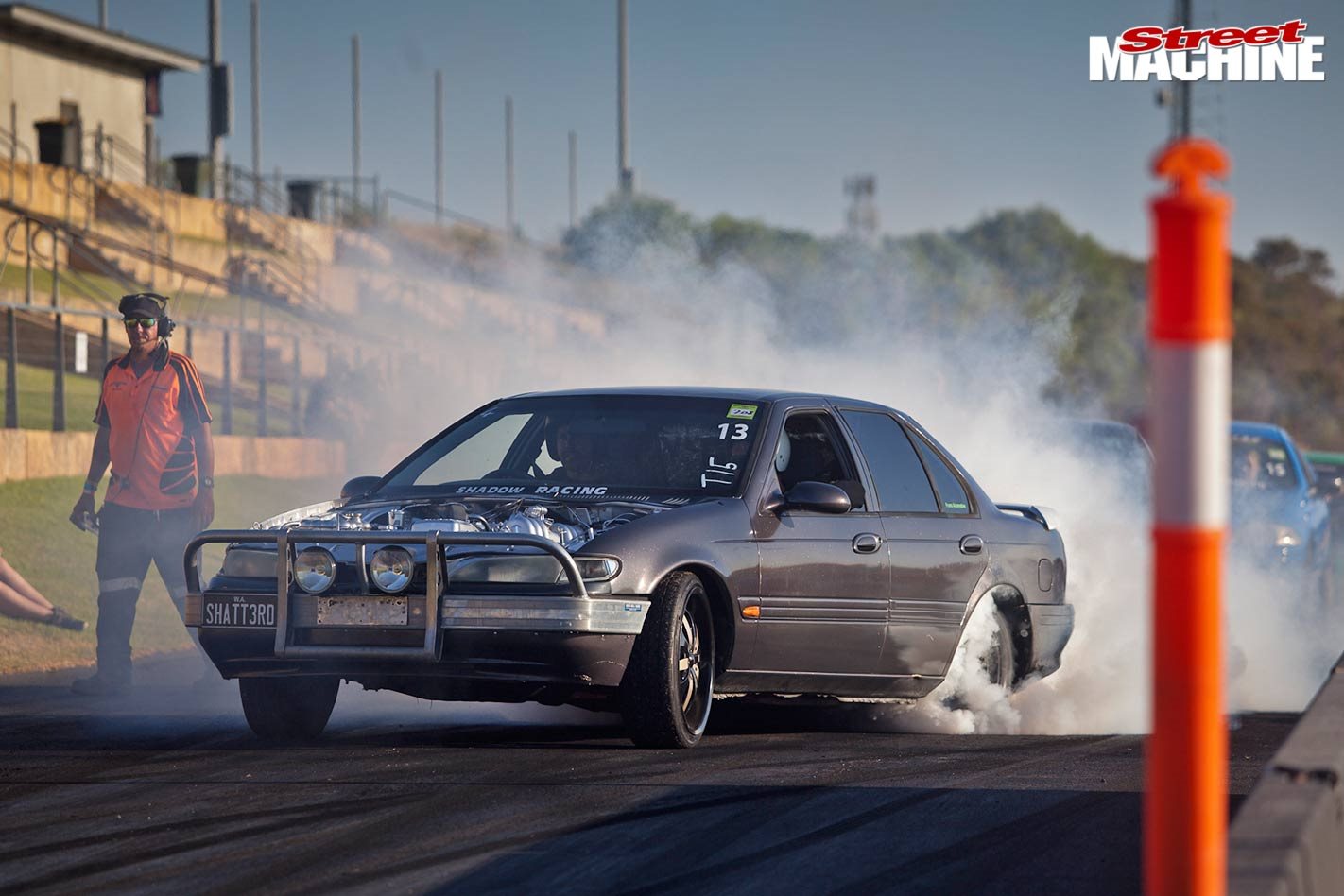 7. If there was an award for best use of Silver Frost spray paint, it would surely go to Mathew George-Kennedy and his EF Falcon, SHATT3RD; I’m pretty sure you could see the engine bay on this thing from space. Regardless, he was having a great time smashing tyres and cruising the event. 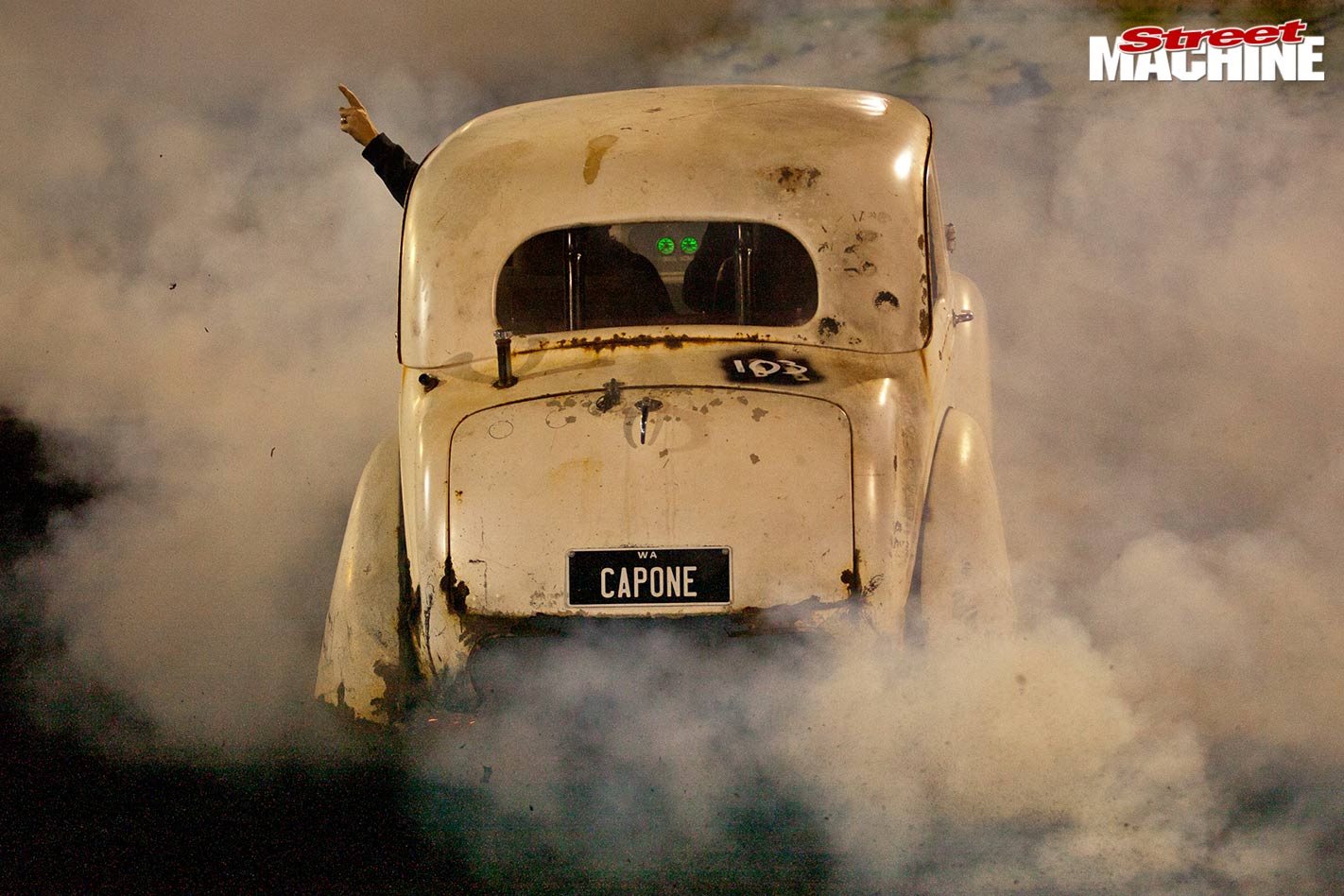 8. Tom Peters is not a small man, but he does have a very small car – so small he has to sit in the back seat to drive it, though that might also be because he’s stuffed an LS1 up front. I was pretty sure the ‘Ten’ in Morris Ten meant it had 10hp, but according to Google it actually had 37hp. Anyway, it’s got at least 10 times that now, and thanks to the custom-built chassis, it can do crazy things like this! 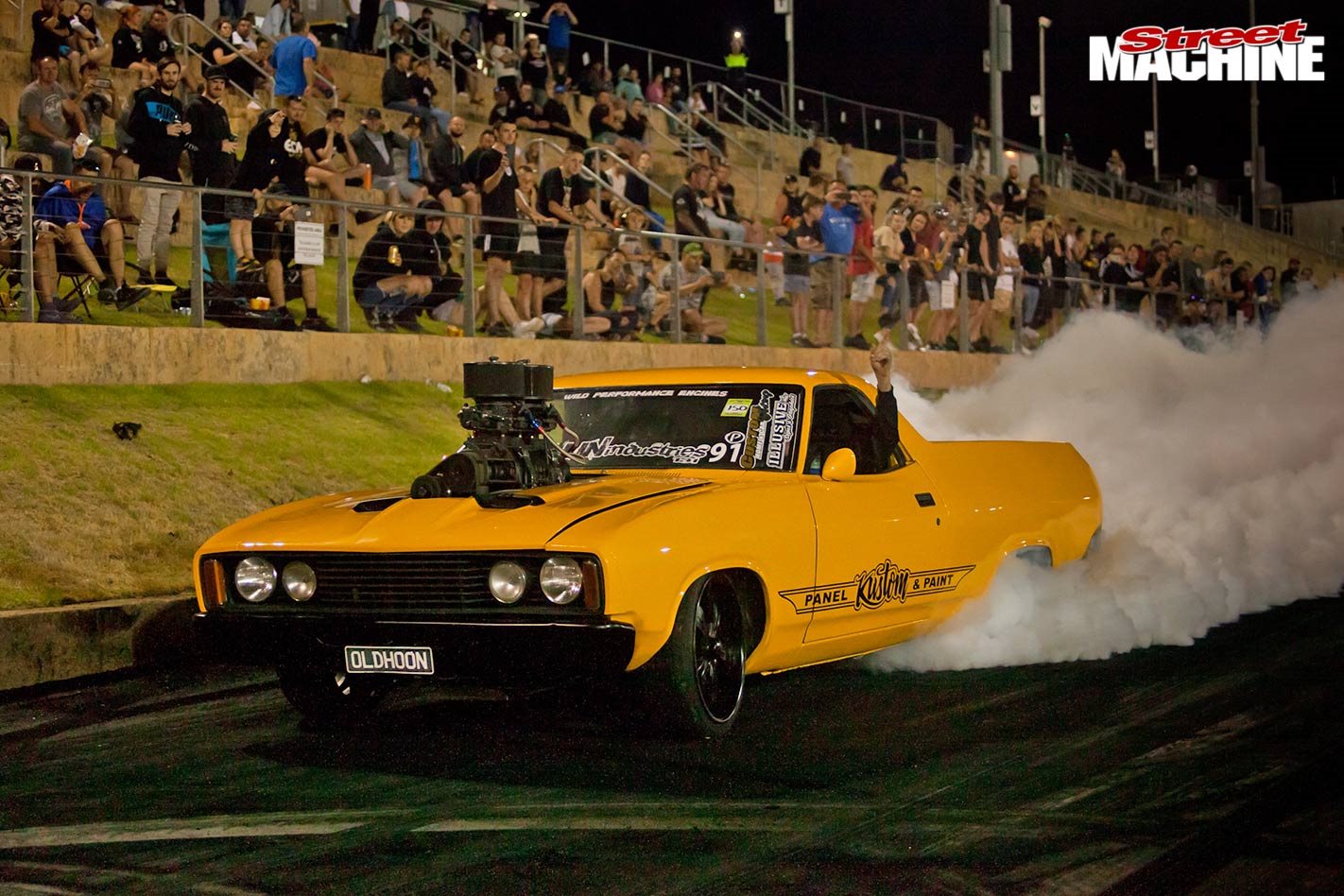 9. Because I like to be different, here’s a photo of SM’s Peter Flint not on fire. He took some time off from filming skids to belt a few sets off his OLDHOON XC ute, but like on his previous outing, the car self-immolated a couple of times. But the 540ci BBF sounded strong and Flinty hasn’t lost any of his skills, so hopefully he can sort out whatever is causing the fires and get back out on the pad. 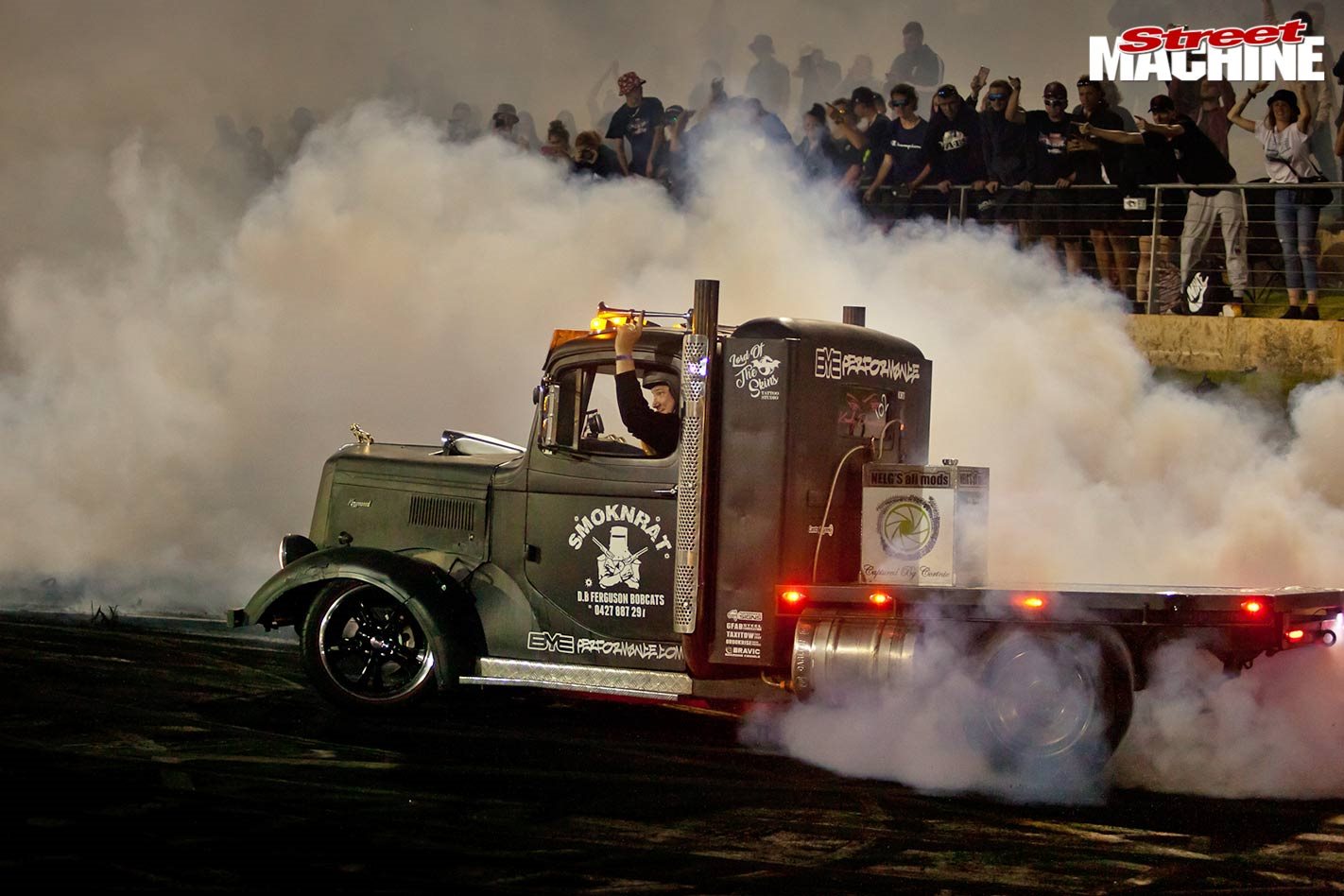 10. Darryl Ferguson always puts on a great show, and he had the blown LS in SMOKNRAT absolutely screaming. The old Morris truck is a crowd favourite, and it’s easy to see why as Darryl throws around the big rig, giving it a tonne of revs and making heaps of smoke. But what’s really cool is when the twin stacks start shooting out flames towards the end of the skid.