THE Mangrove Mountain Muscle Car Club has always been active in its local community, including displaying members’ cars at the annual Mangrove Mountain & Districts County Fair held in the NSW Central Coast hinterland each October. For 2015, the members stepped it up a notch with the inaugural Mountain Mayhem Billy Cart Derby which attracted a stellar array of innovative shed-built specials driven by young and old alike.

The main man behind the Derby was MMMCC founder and well-known drag racer Stephen Peruch, who conceived and steered the idea through a suffocating maze of legal, insurance, eligibility and road-closure issues. The Australian National Street Machine Association came on board as the principal sponsor by providing public liability insurance for the event. Rod Martin Cycles donated the trophies.

Racing was conducted down a hill adjacent to the fairgrounds, drawing an enthusiastic crowd. Competitors included four-year-old Jasper Wilson (with his old man Leif riding shotgun) and six-year-old Matthew May riding solo, together with many father-and-son teams sharing carts through qualifying, eliminations and finals. Zach Gallagher took home the Junior and Overall trophies, while hot rodder Lee Holt was the quickest of the big kids in his scale-model ’31.

The Derby was the hit of the Country Fair and attracted lots of local media interest. Best of all, it gave the next generation a taste of car building and competition, which is kinda the whole idea. The course was lined all morning with kids giving their folks plenty of wistful looks about next year’s event, when numbers are expected to grow dramatically. 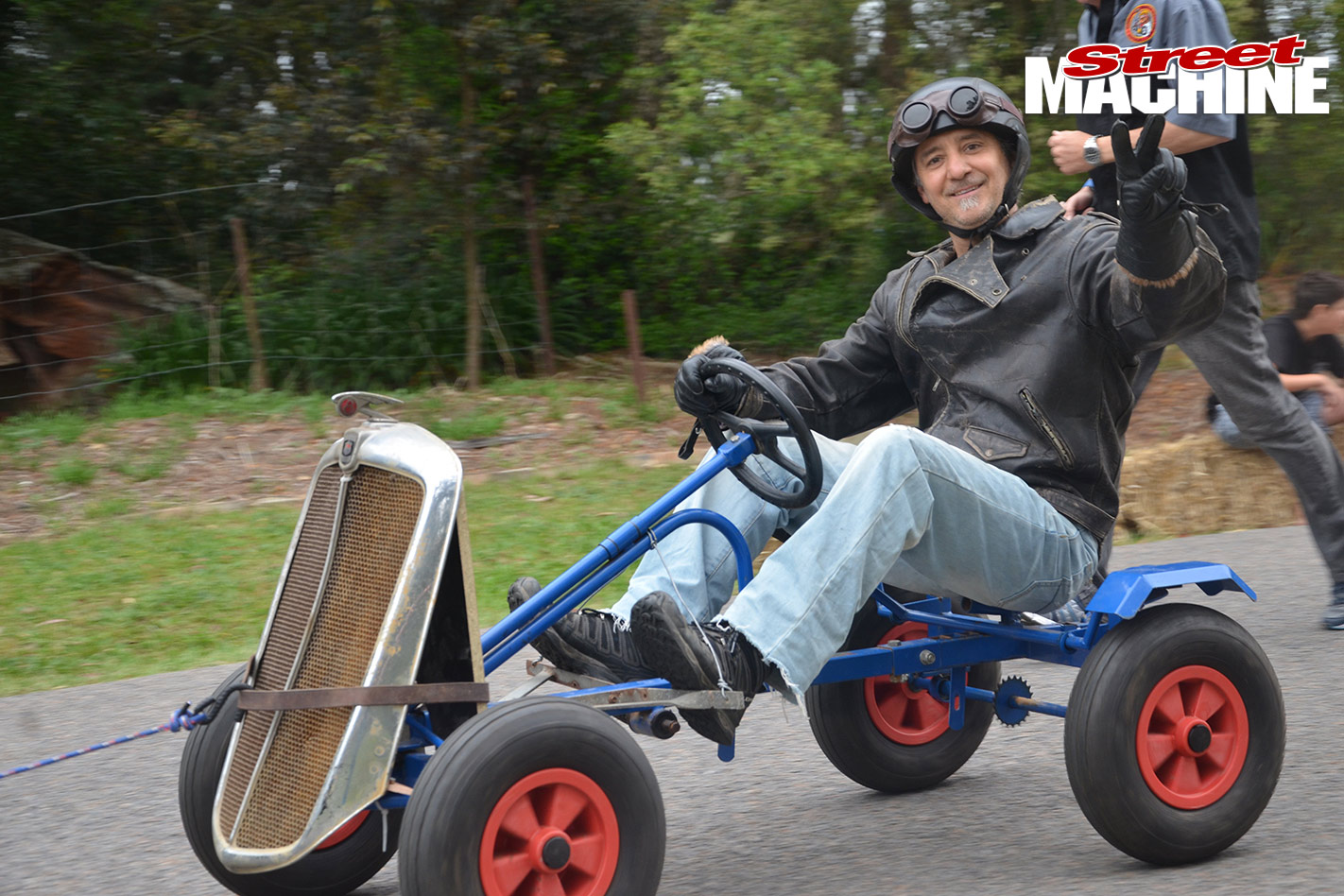 Justin Wood is planning something with a lower centre of gravity for next year’s event, after a couple of big loses 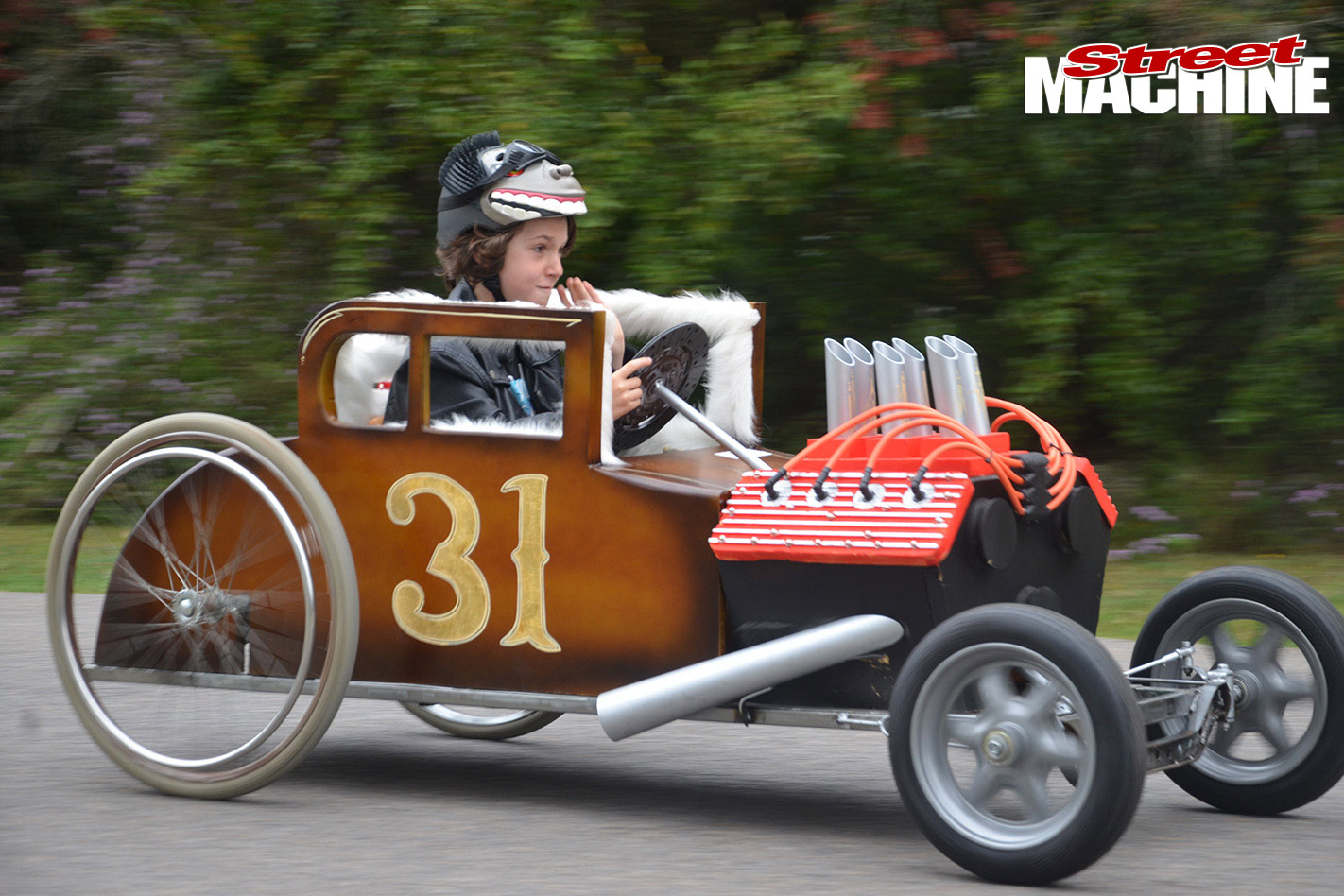 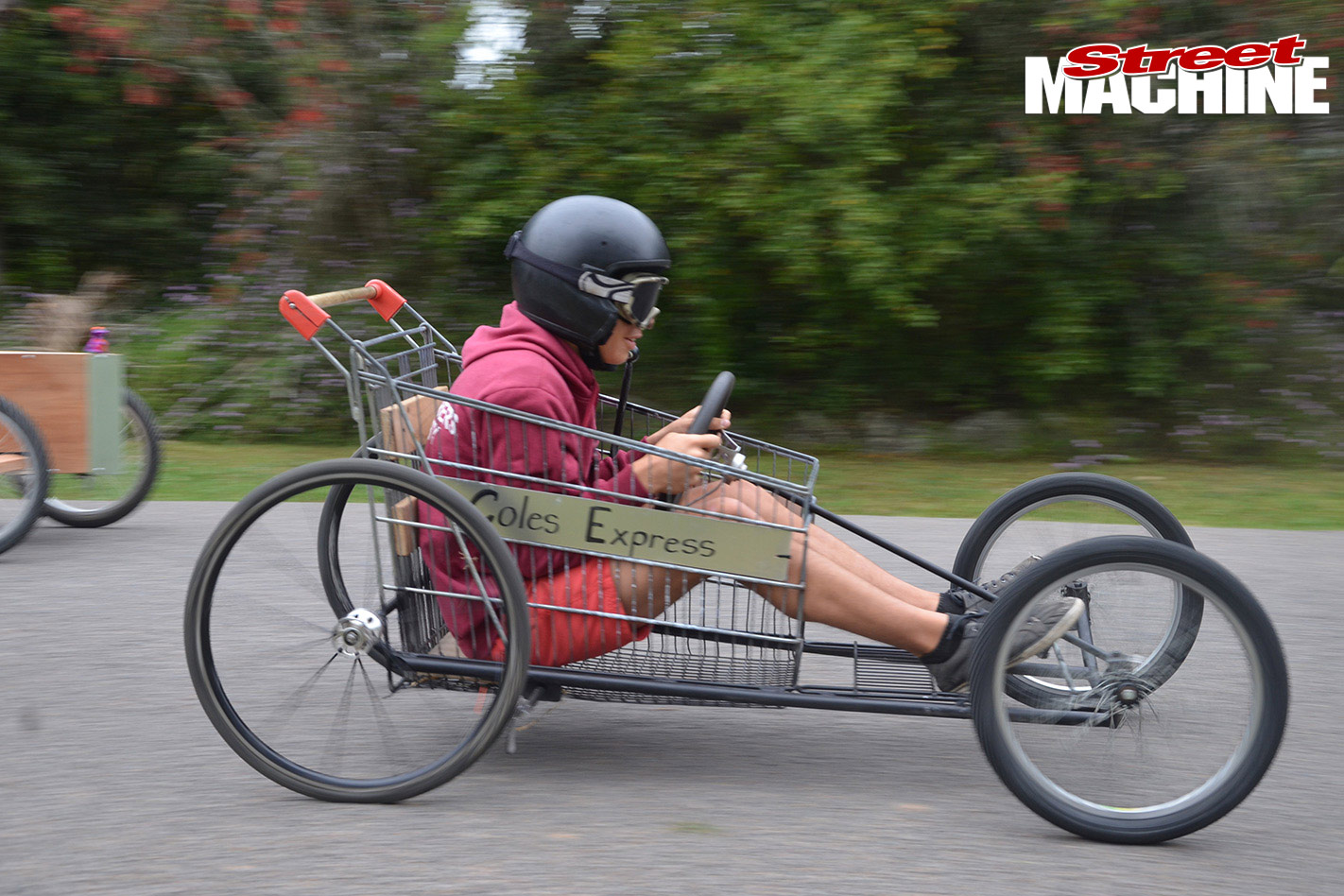 Sean Peruch designed and built ‘Coles Express’ under the guidance of his father Stephen. It ran a close second in the Junior final 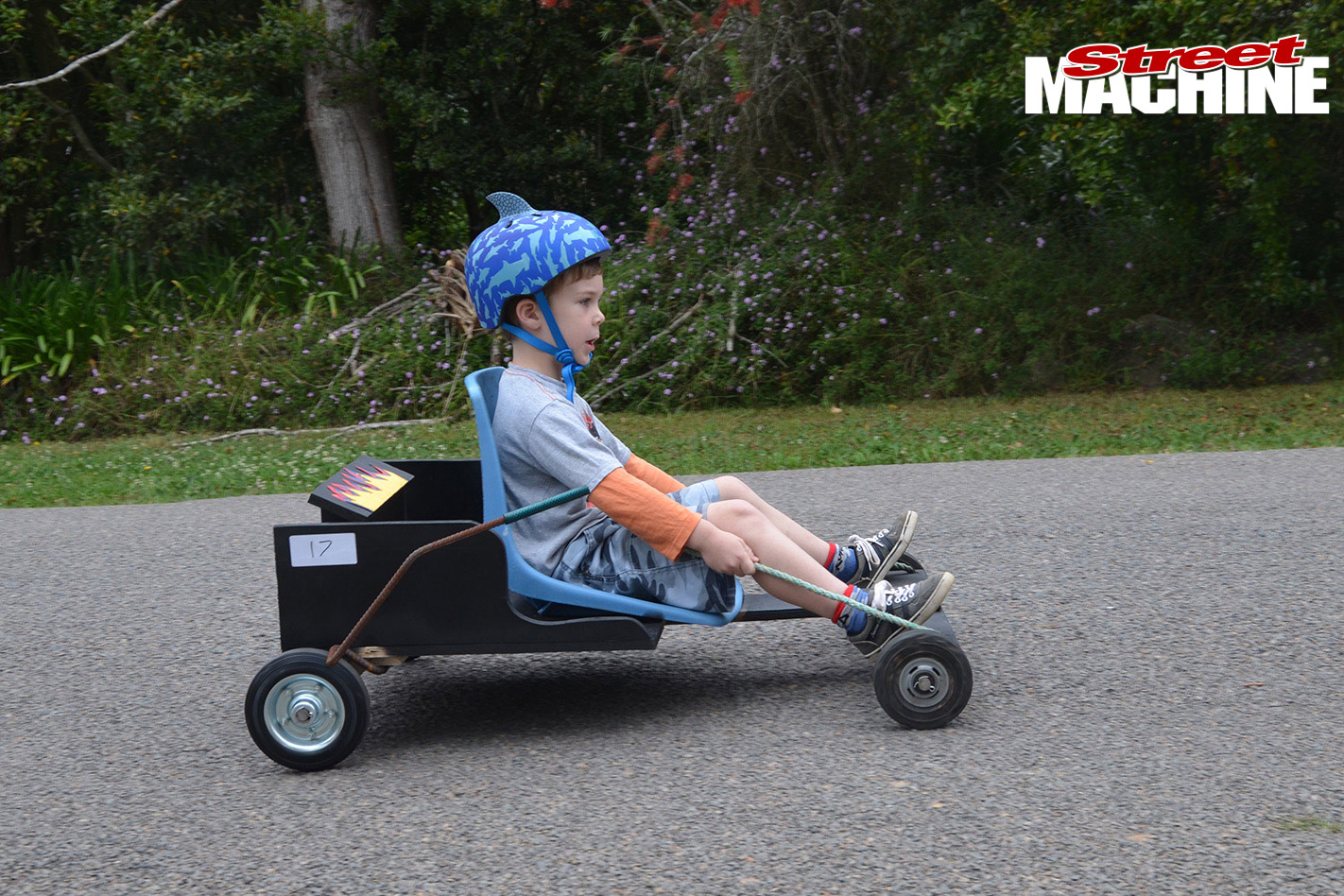 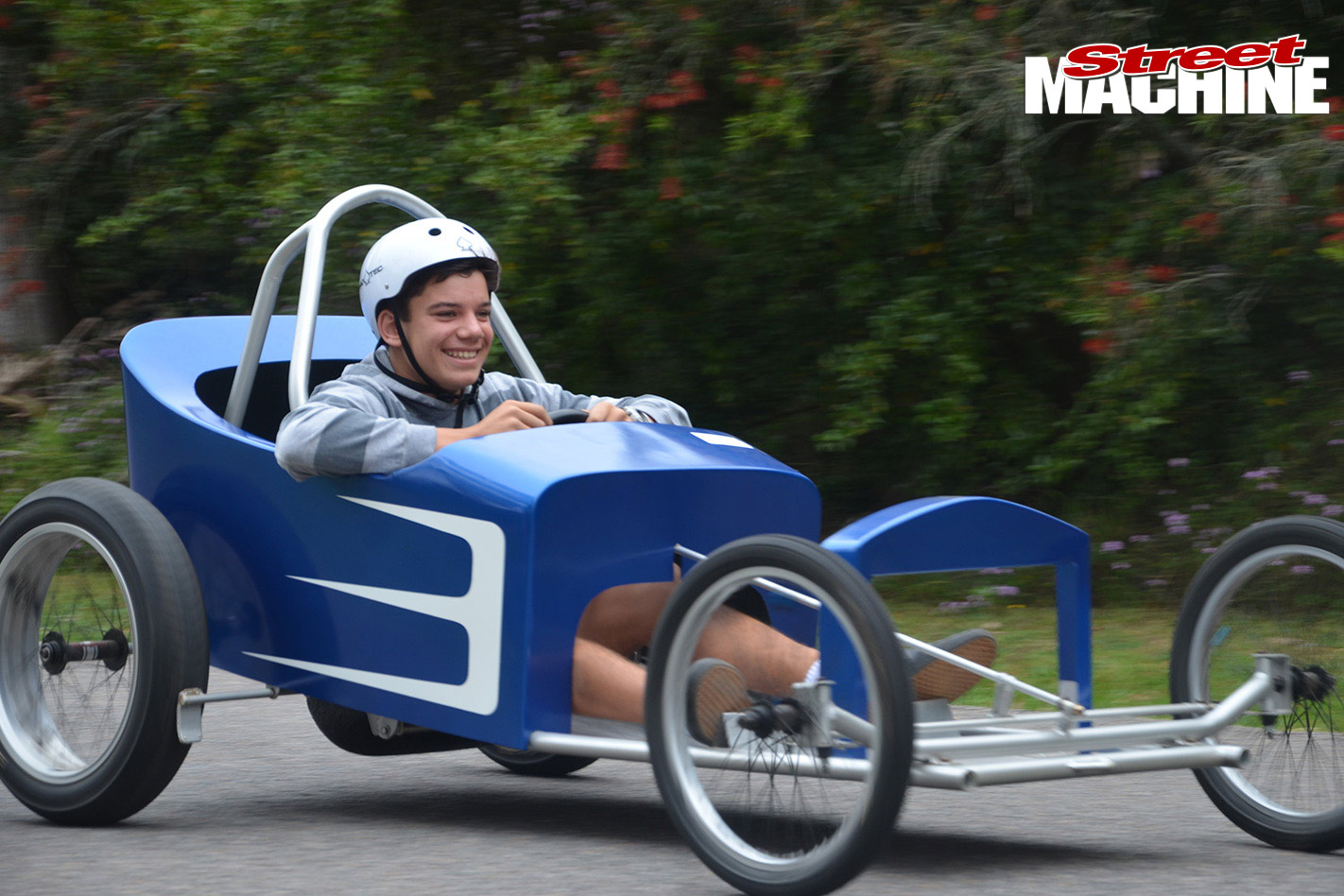 Adam Peruch (Sean’s twin brother) took a more traditional approach with his T bucket, including sourcing parts and all cutting and welding 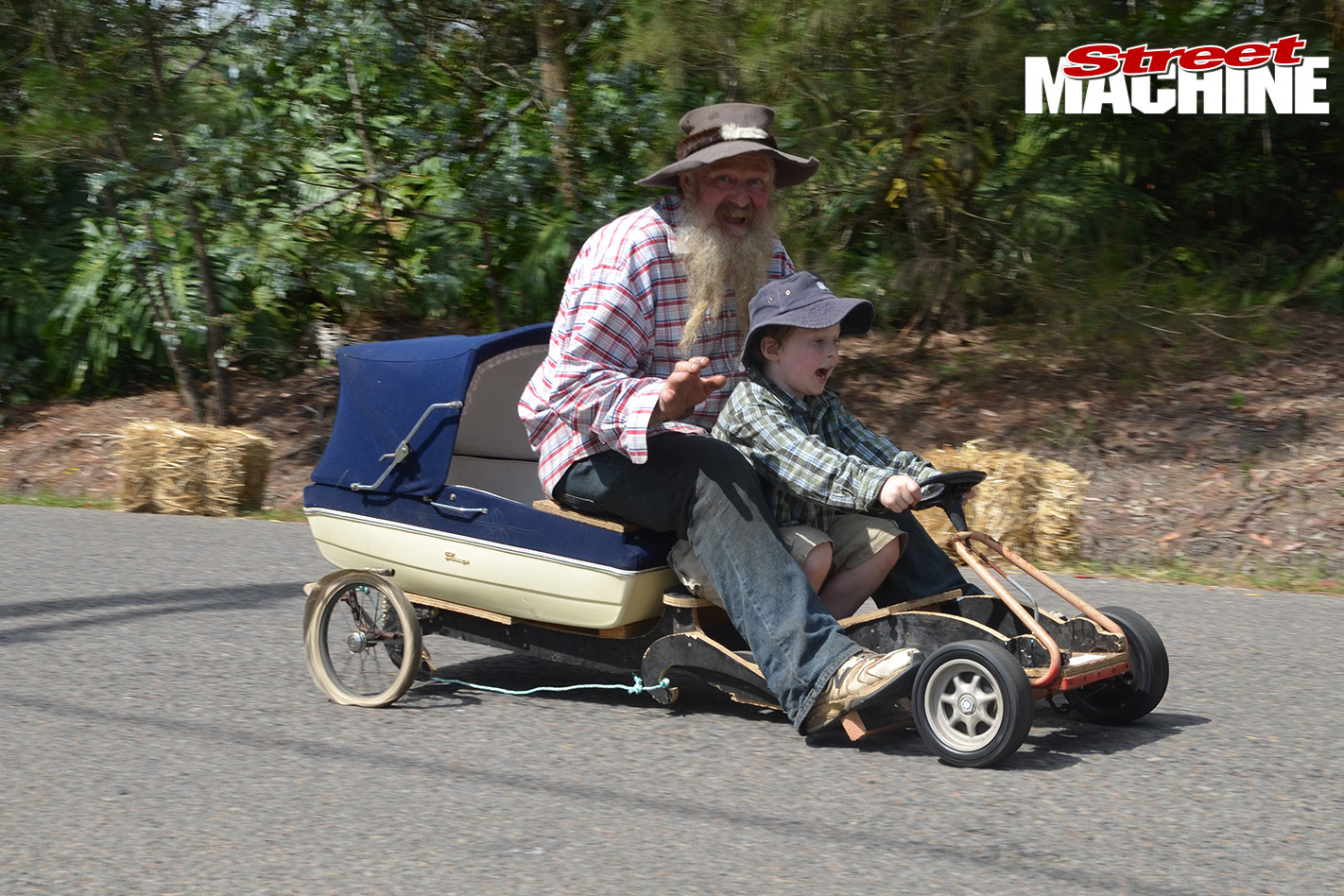 Leif Wilson and son Jasper weren’t the fastest duo out there, but you could hear the young bloke squealing the whole length of the course! 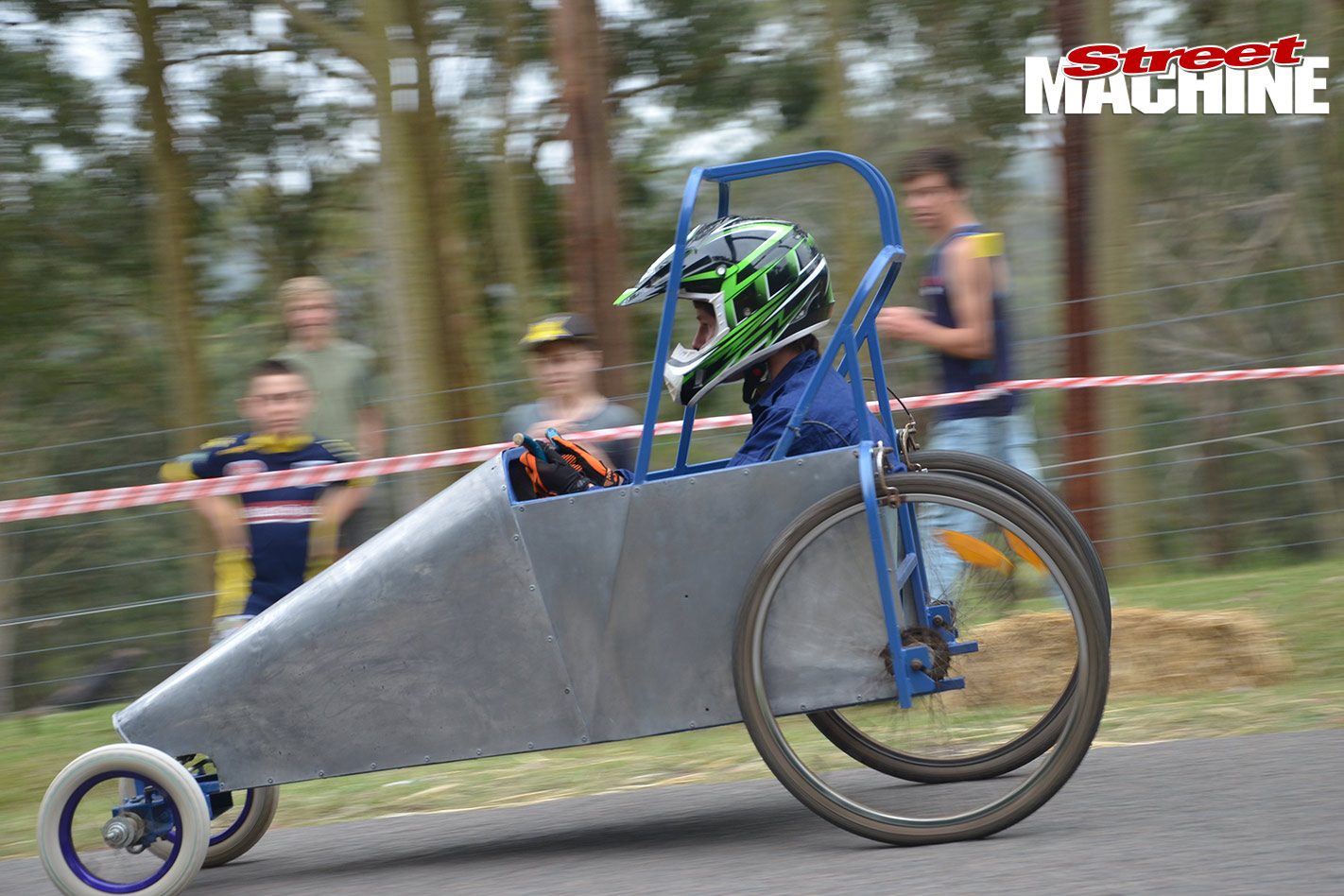 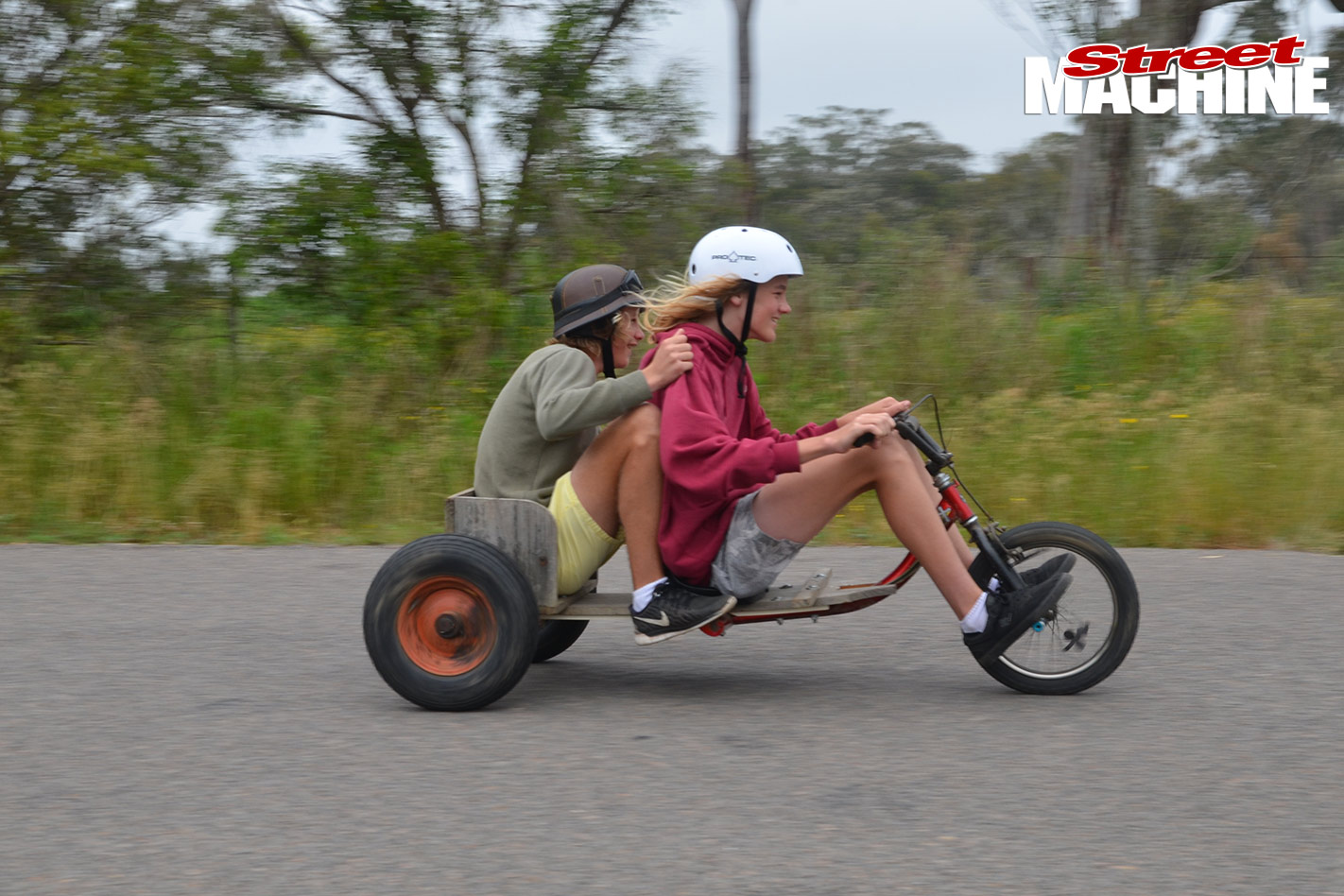 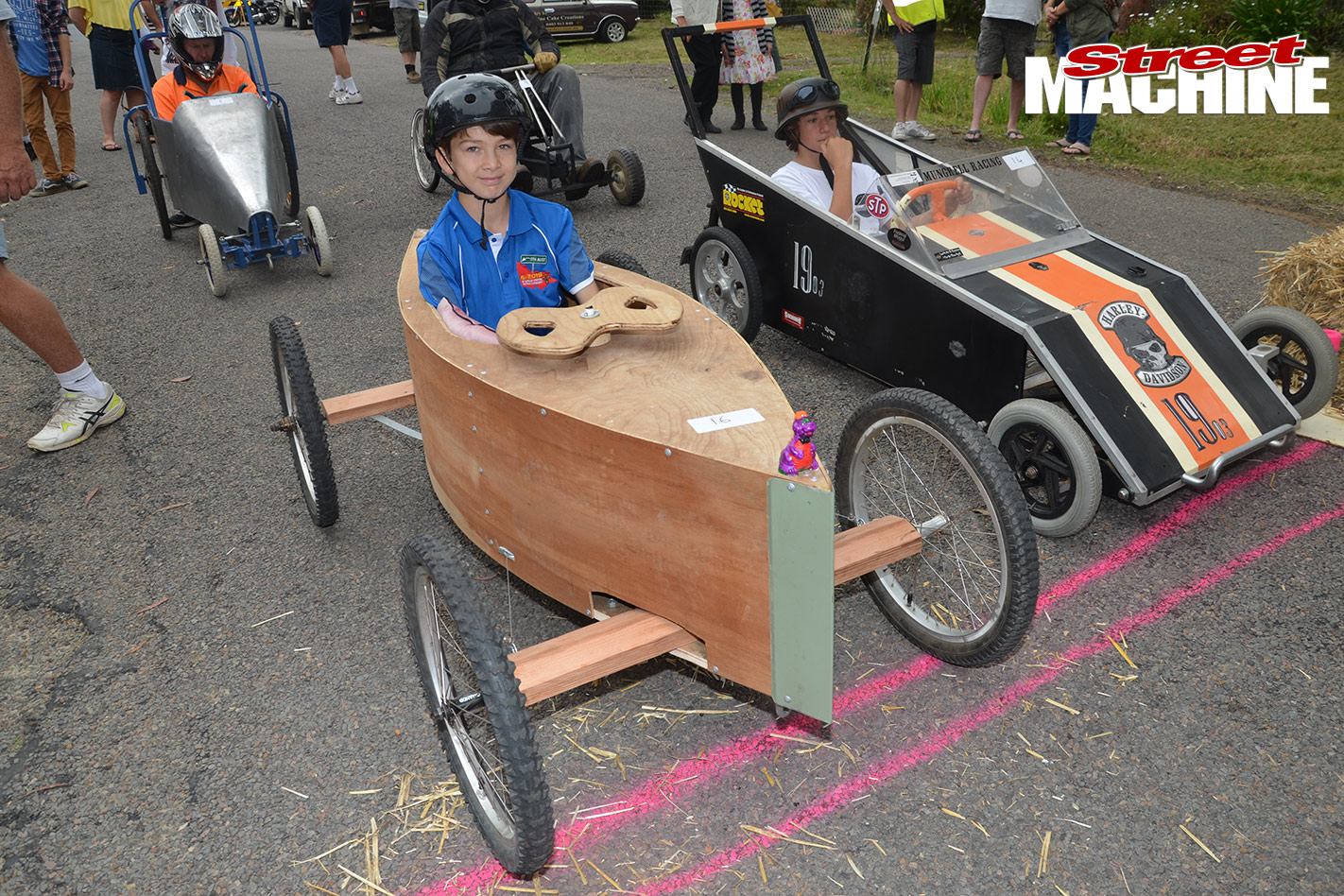 Harry Meggs and Zach Gallagher on the start line during qualifying 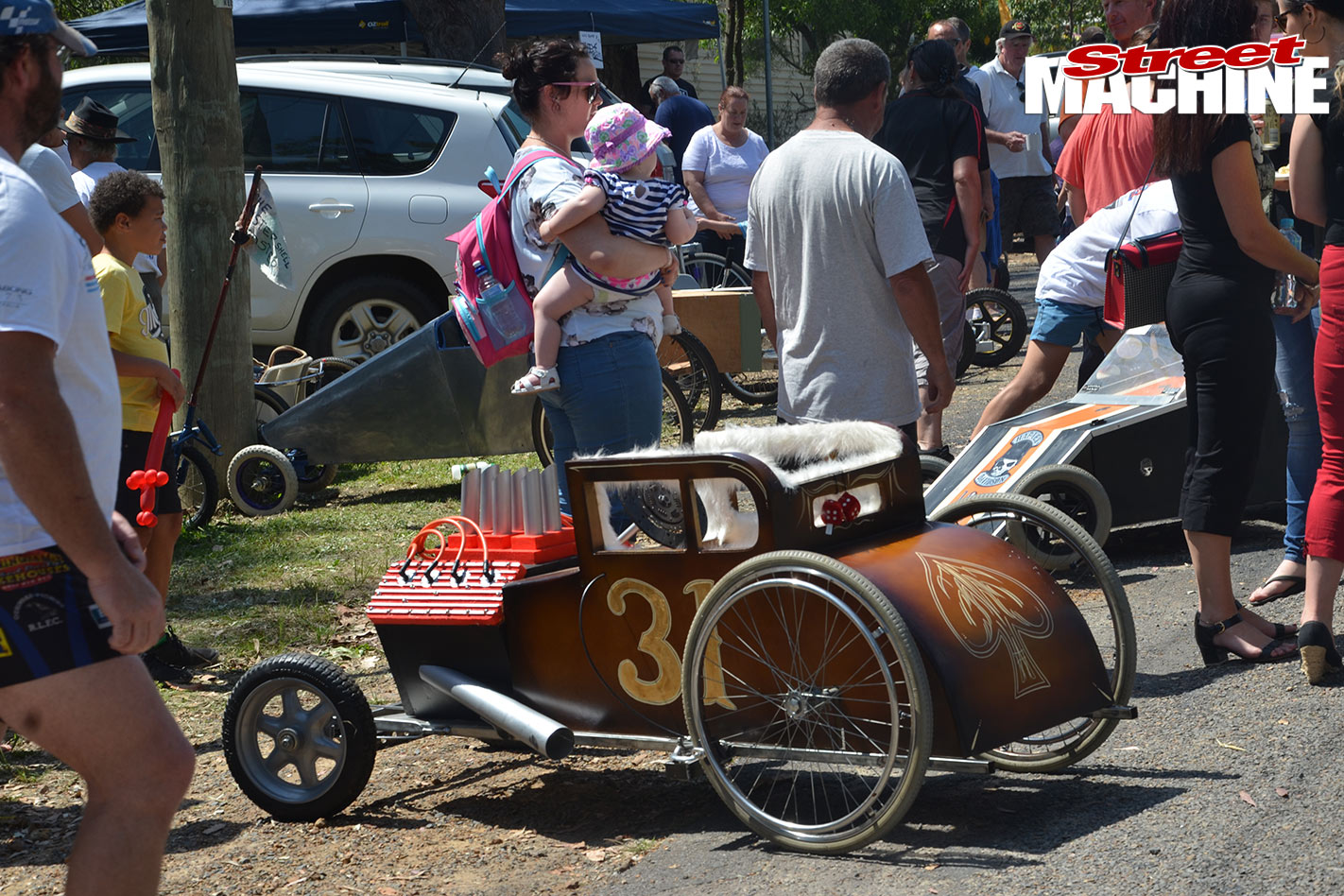 Holt family truckster in the pits 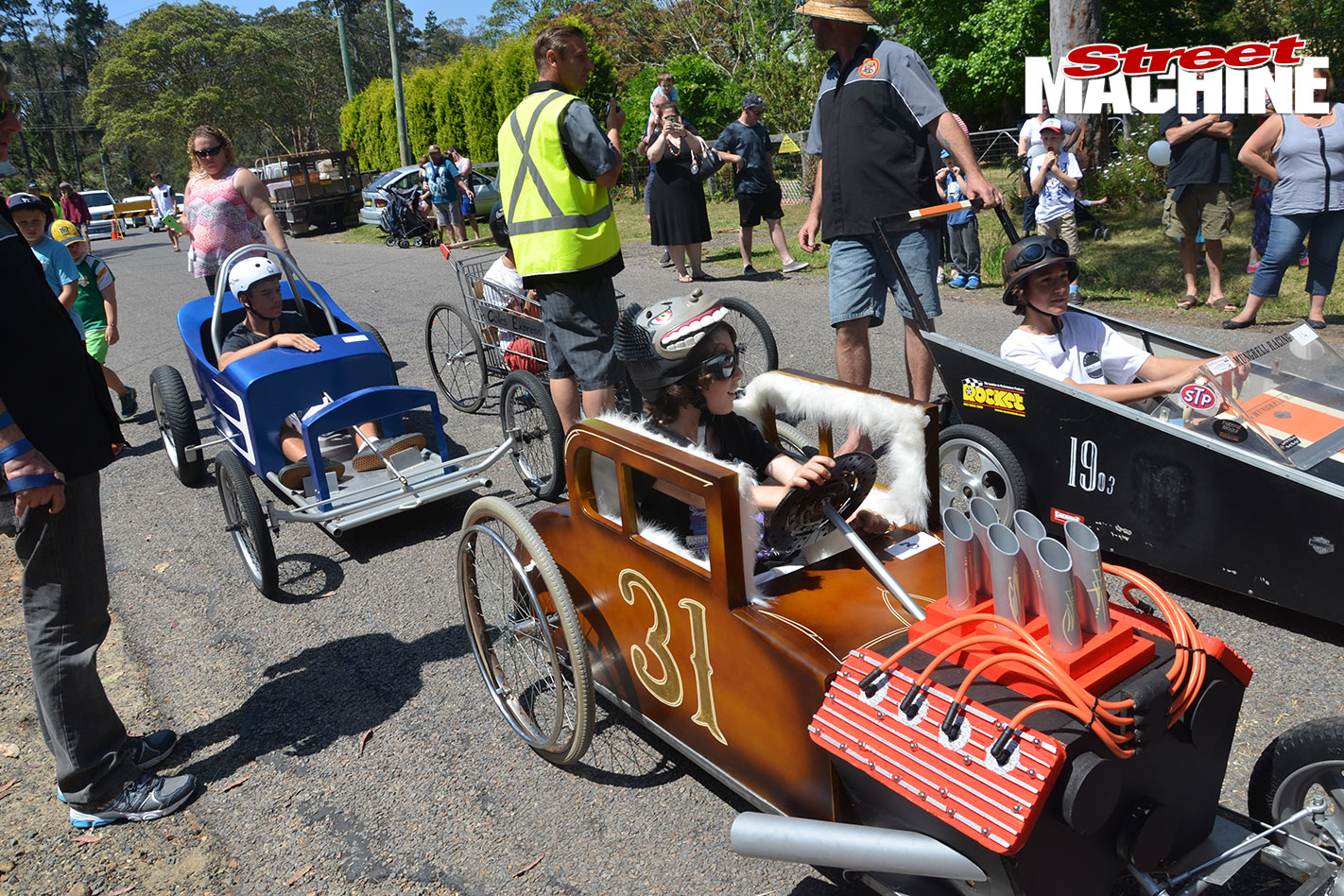 With much cheating happening with push starts during qualifying, the competitors voted for a roll start in the finals. A starting ramp will be added next year 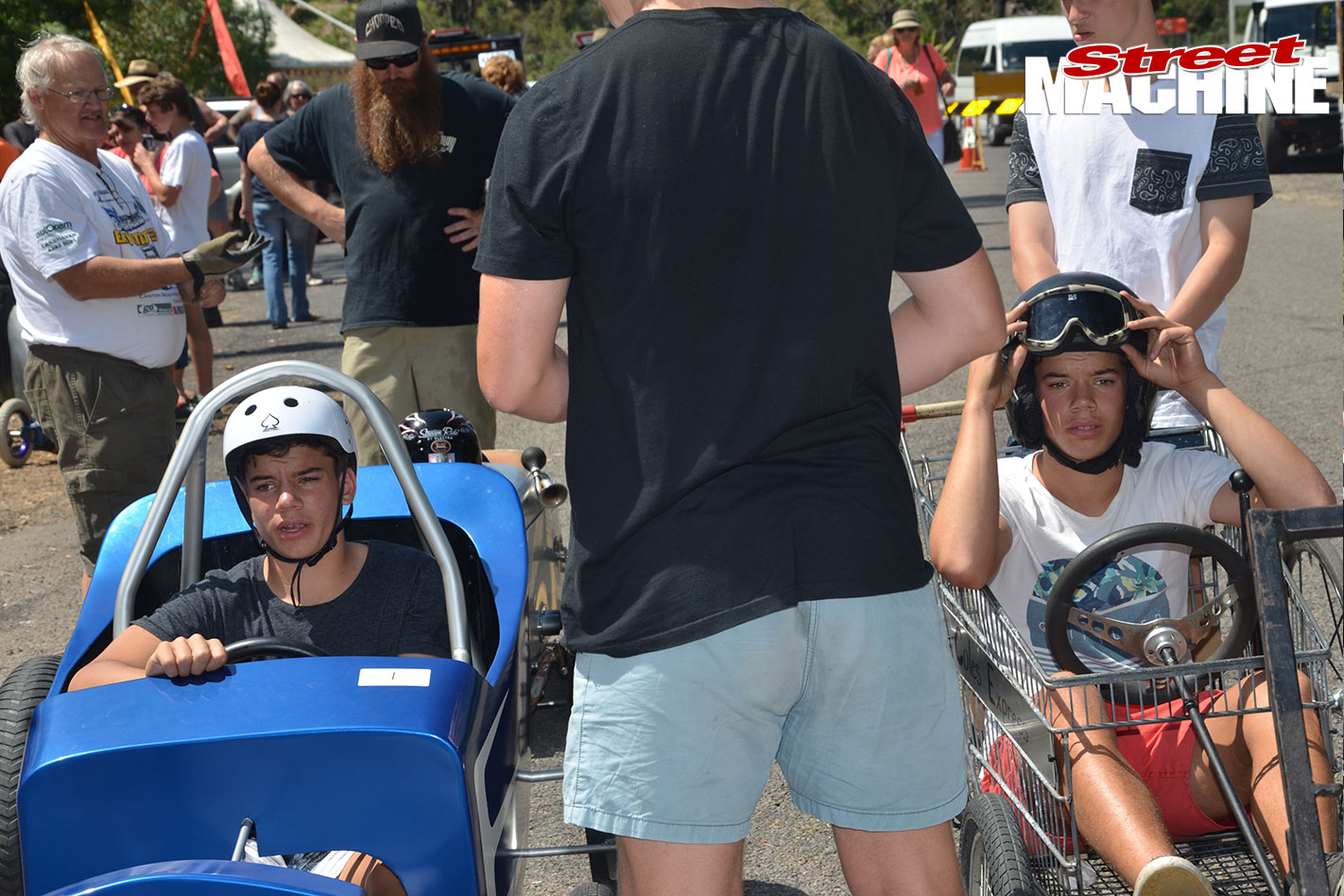 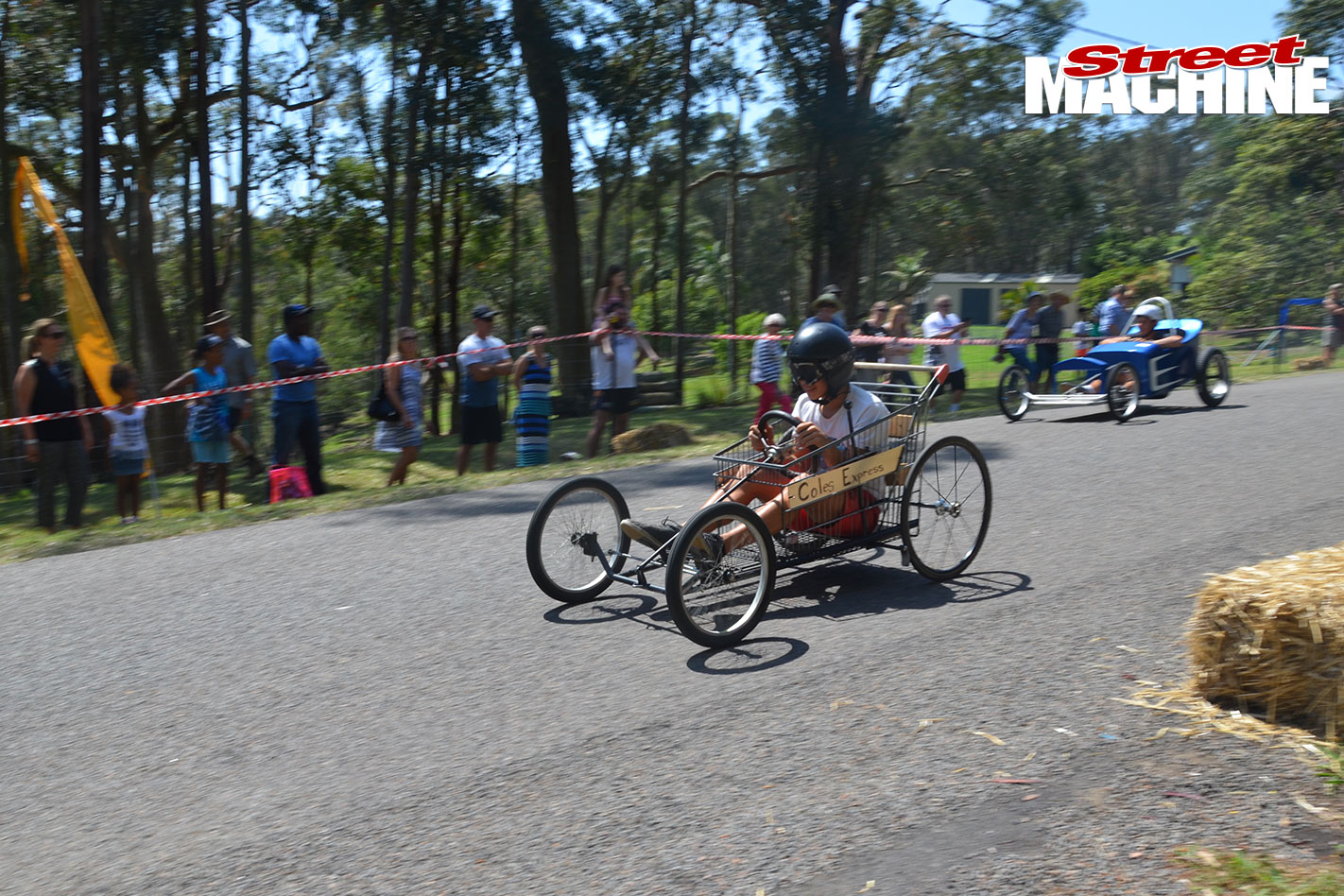 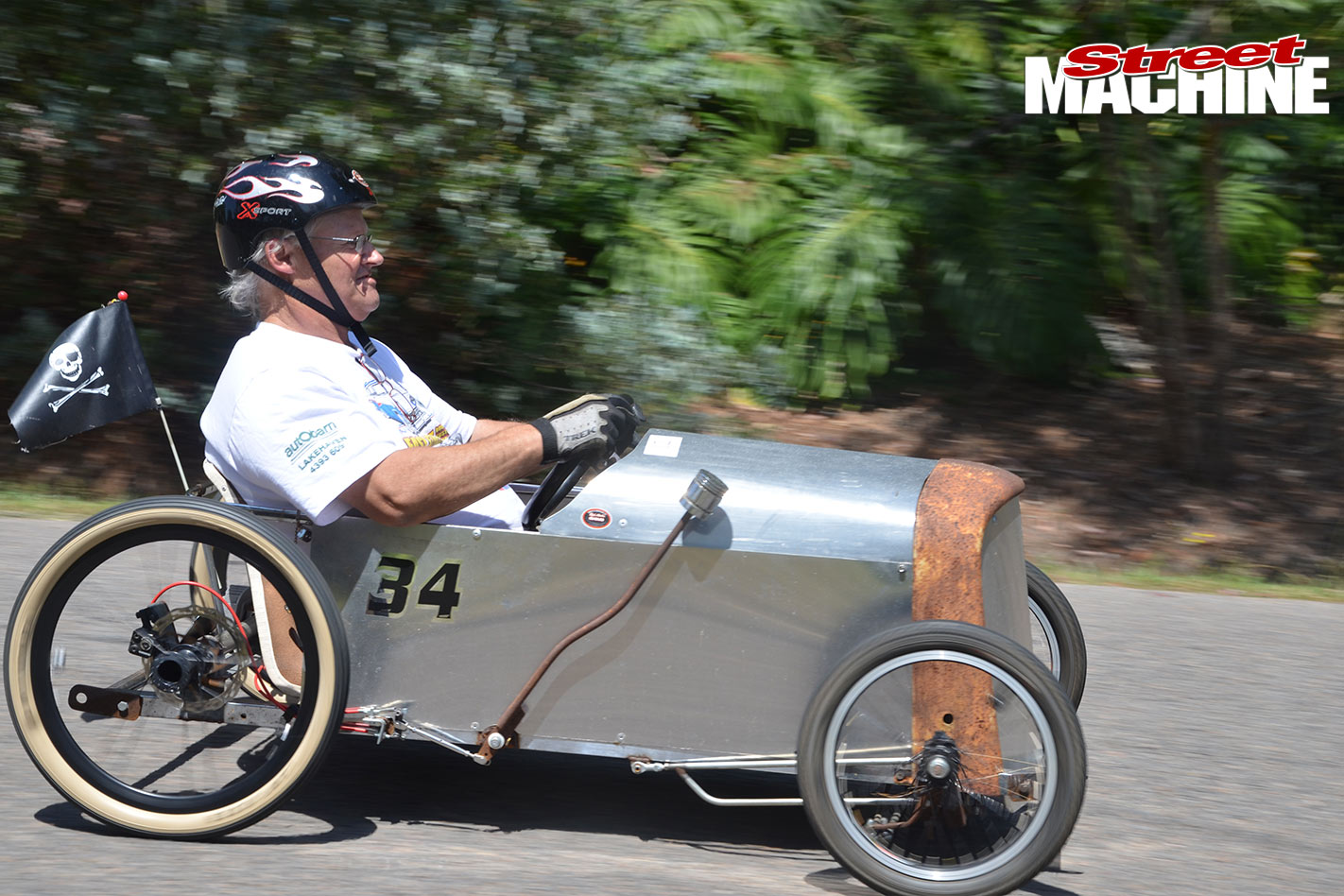 Rod Martin is usually seen cruising around Gosford in his flamed ’66 Impala but when it comes to racing, he goes for this cool ’34 roadster 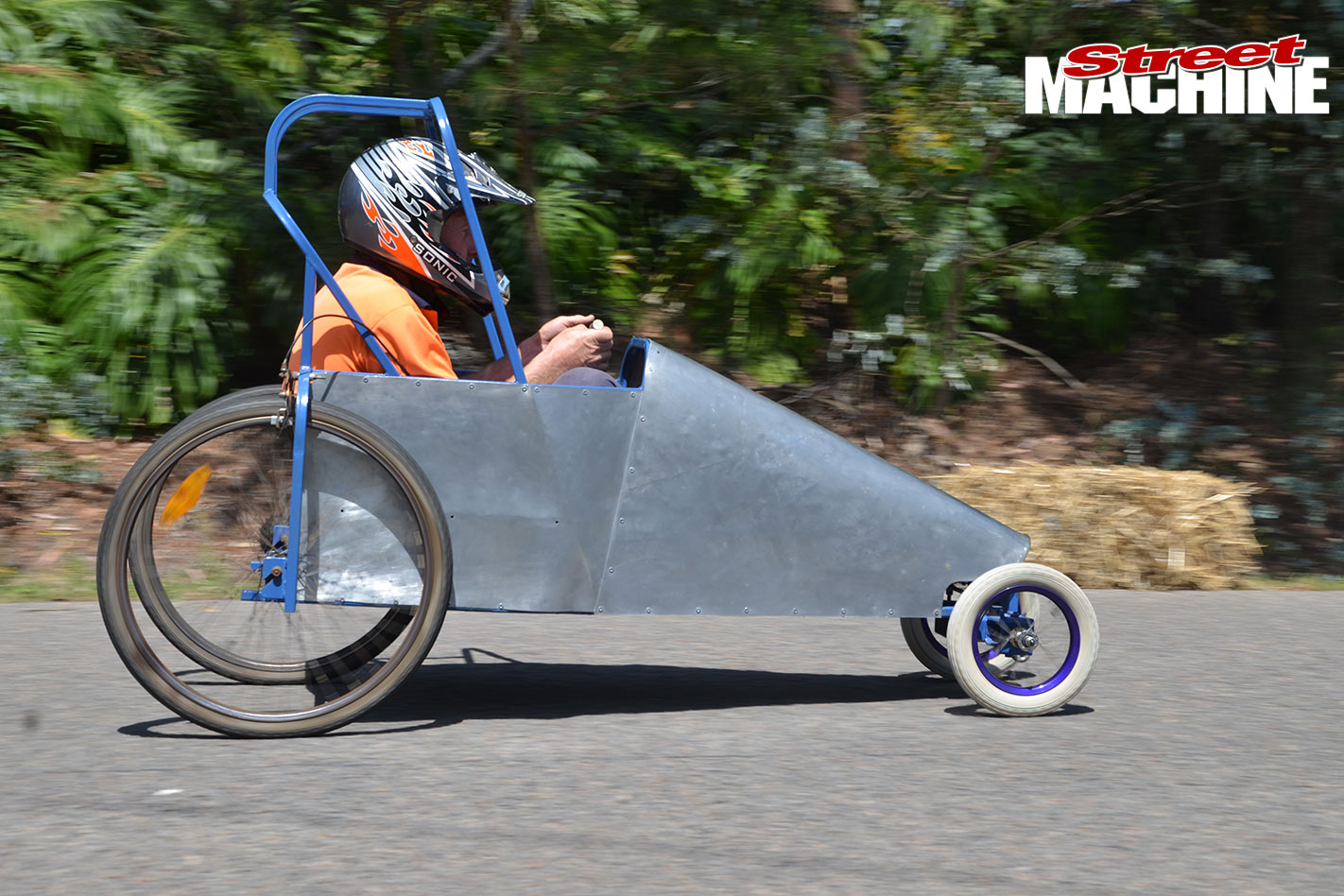 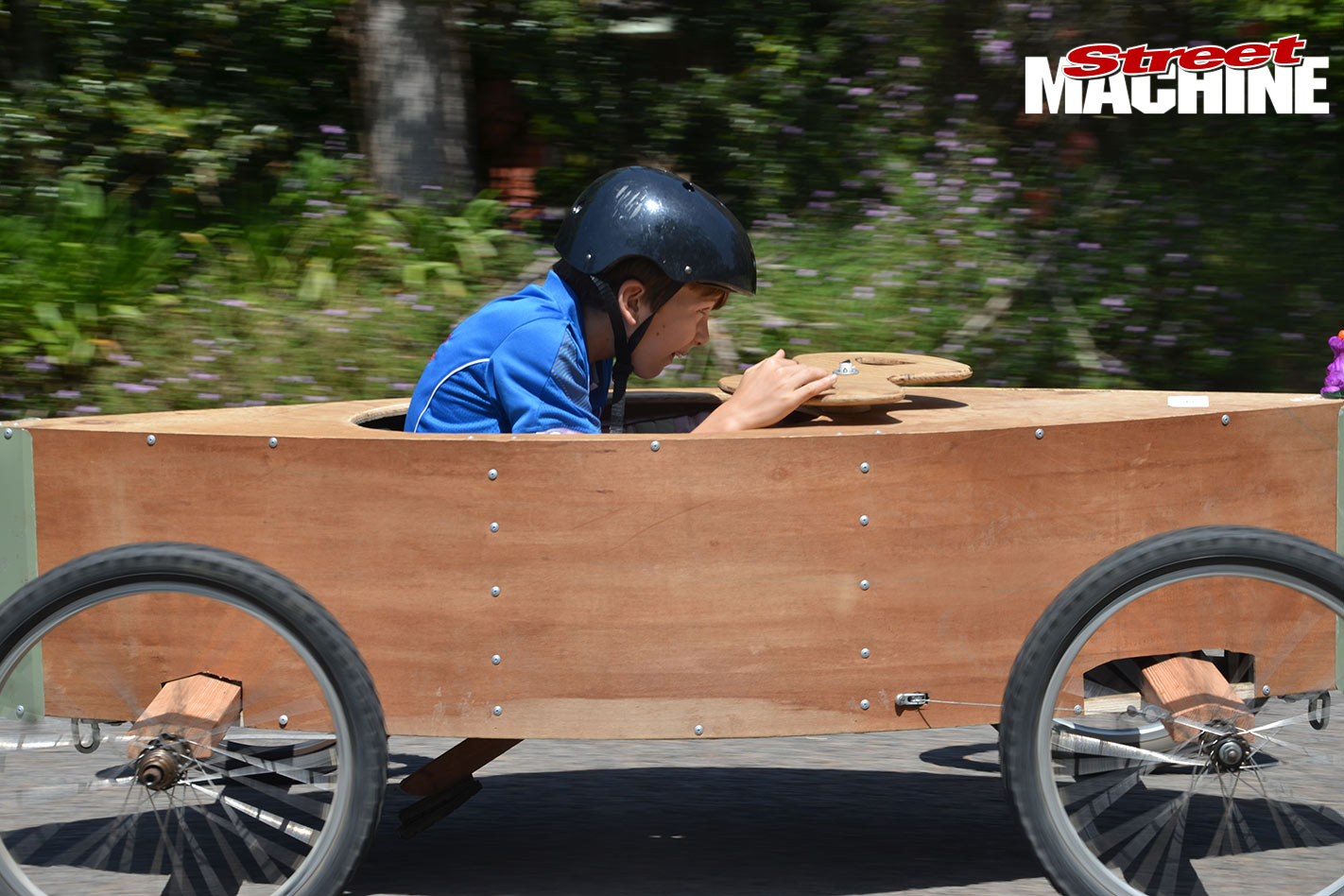 Harry Meggs at speed in the beautifully-crafted entry from the Peats Ridge Scout Group, built under the guidance of his dad Robert Meggs 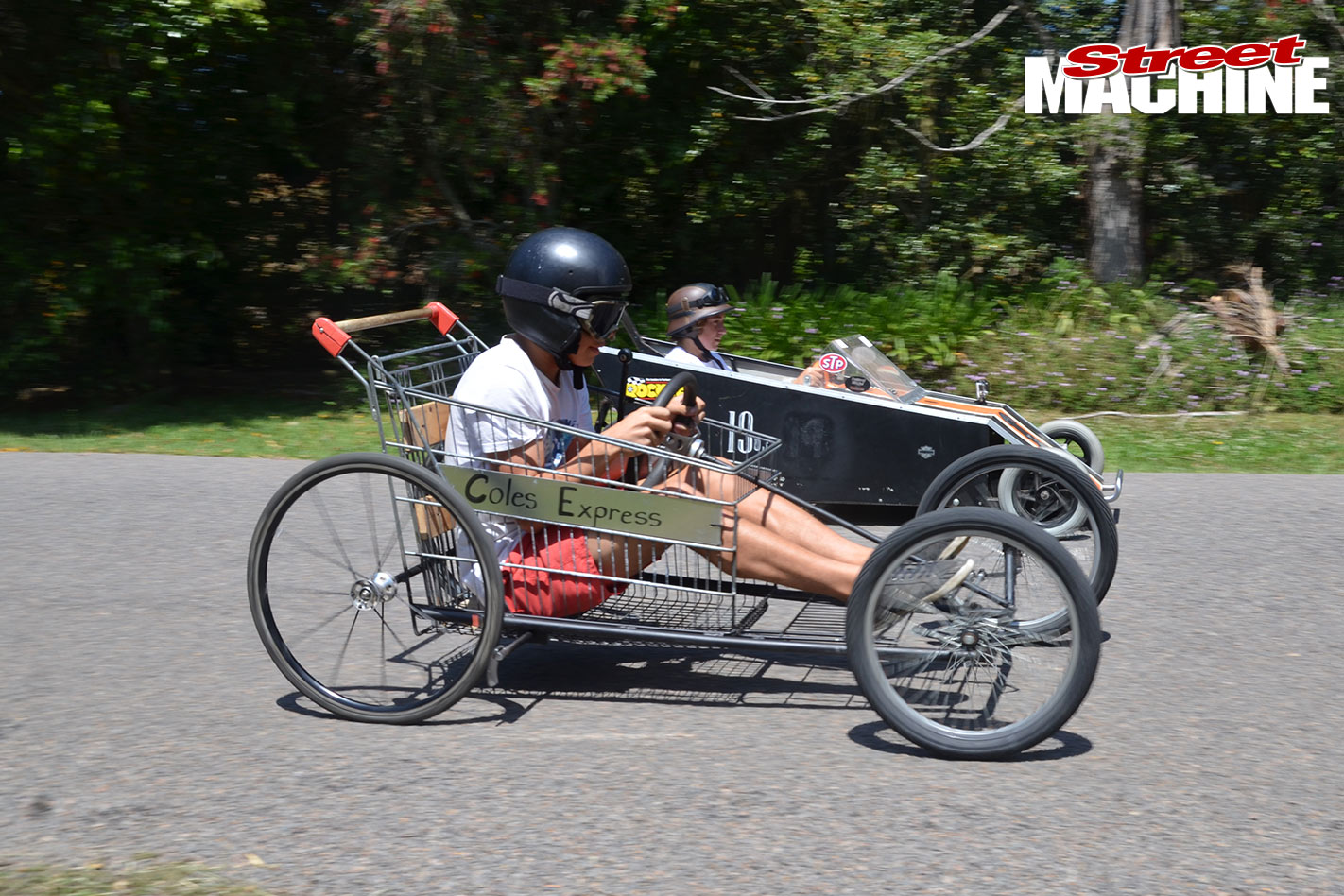 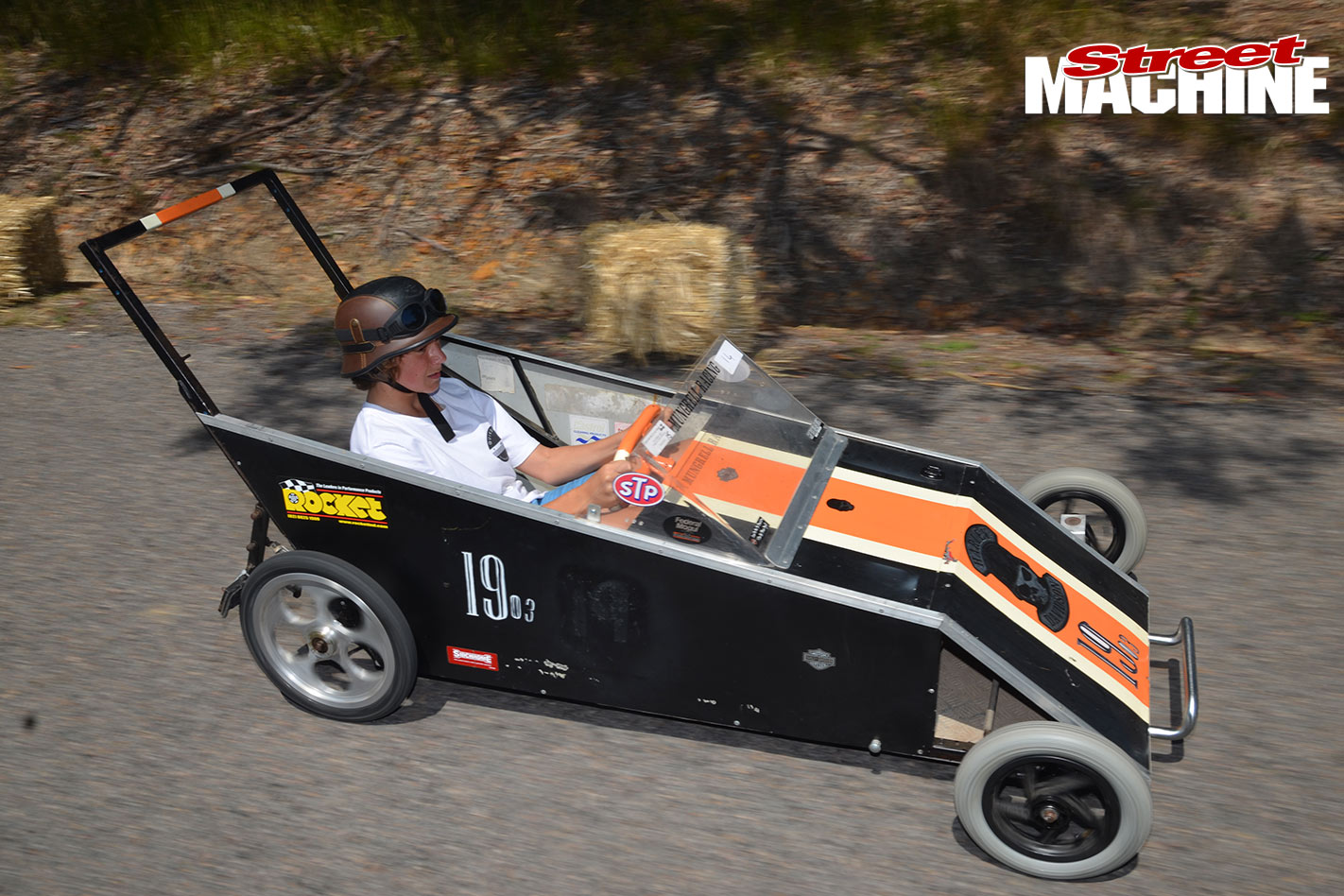 Fastest on the day was Zach Gallagher. The cart was bought at a swap meet but then largely rebuilt by his dad David 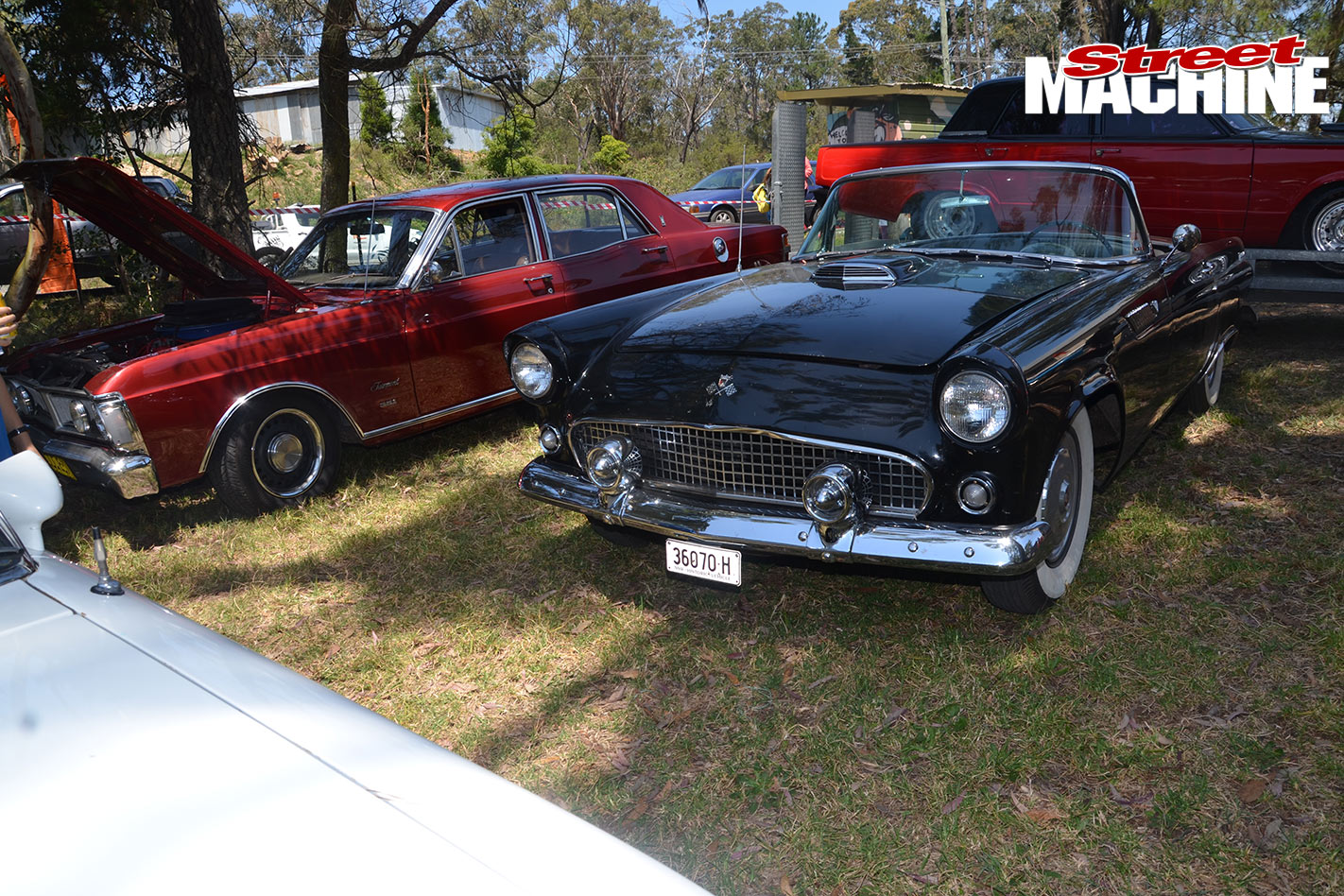 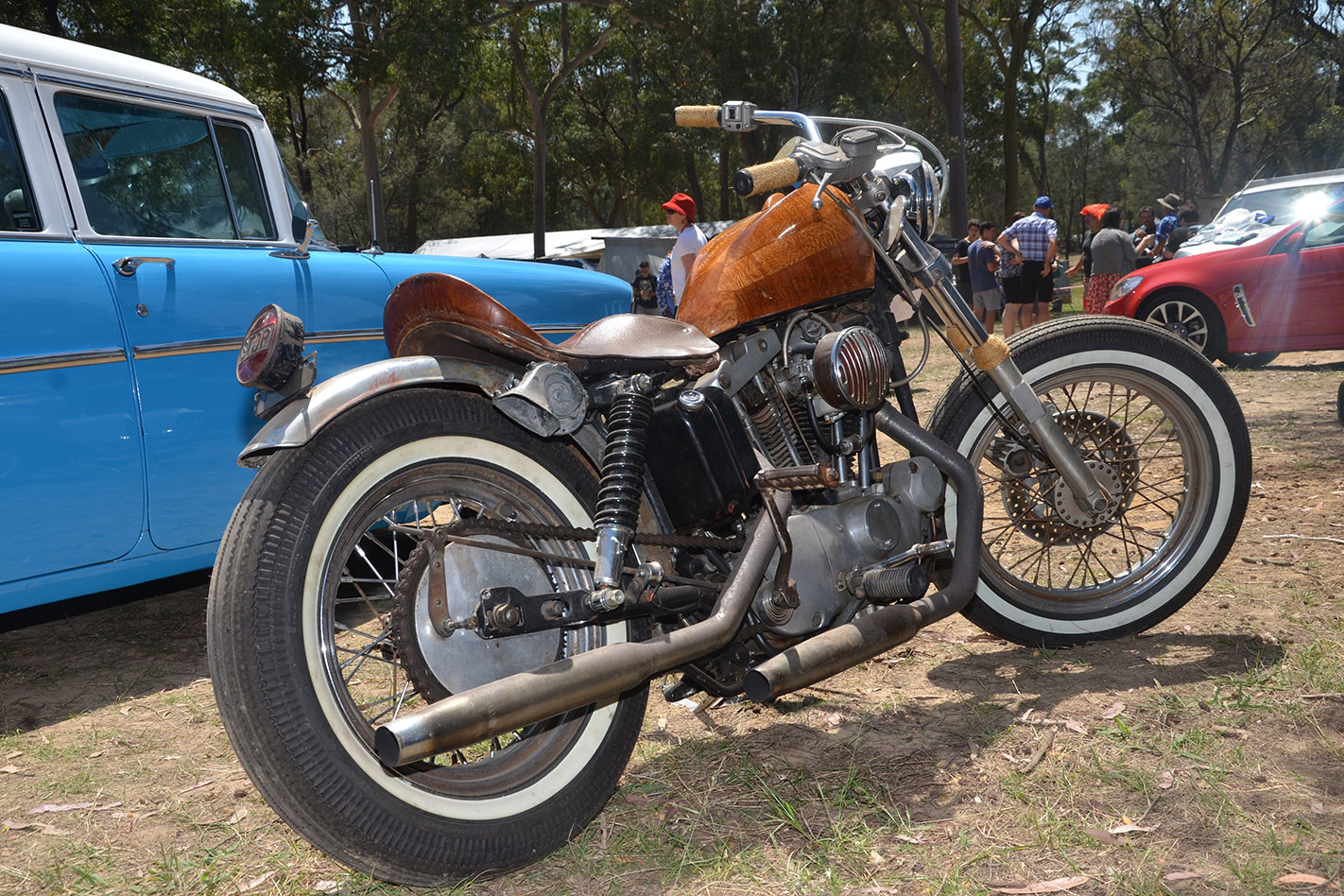 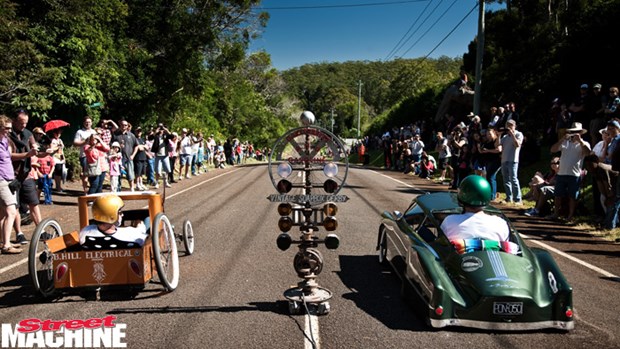 In pics: Garterbelts and Gasoline

ONE of our favourite shows on the calendar is the annual Garterbelts and Gasoline festival, held each may at Mt Tambourine on the Gold Coast hinterland. 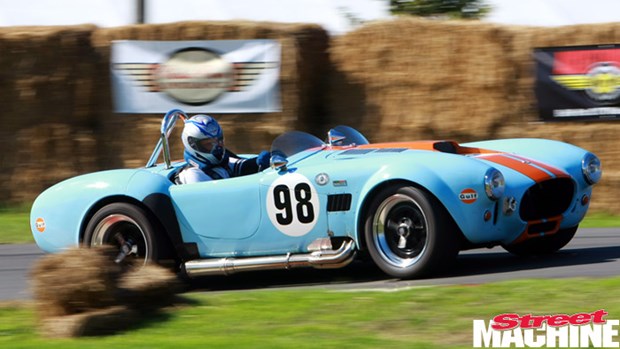 Each year, rally legend Rod Millen holds his own Goodwood-style meeting on the driveway of his family home. A ton of stunning machinery turns up, as well as many famous faces,... 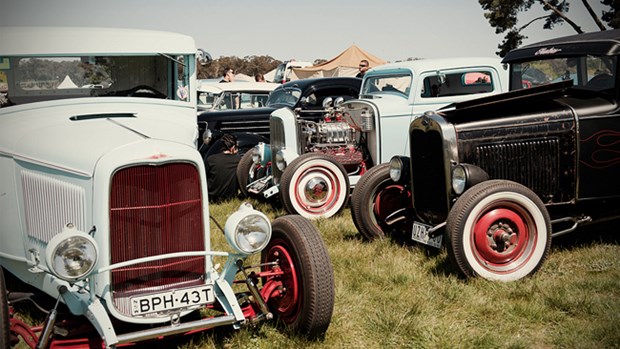