TIMES have changed. Last year I rocked up to the Mud Run at Gresford Showground in my 1951 Ford shoebox; I felt like a bad-arse hero from a Western riding into town. This year I snuck in steering a Toyota Corolla hybrid, and I only made it past the two henchmen from the Death Dodgers Car Club on the front gate because I was on their ‘already paid’ list. Otherwise my protests that the ’51 was currently mid-roof chop would have fallen on deaf ears. 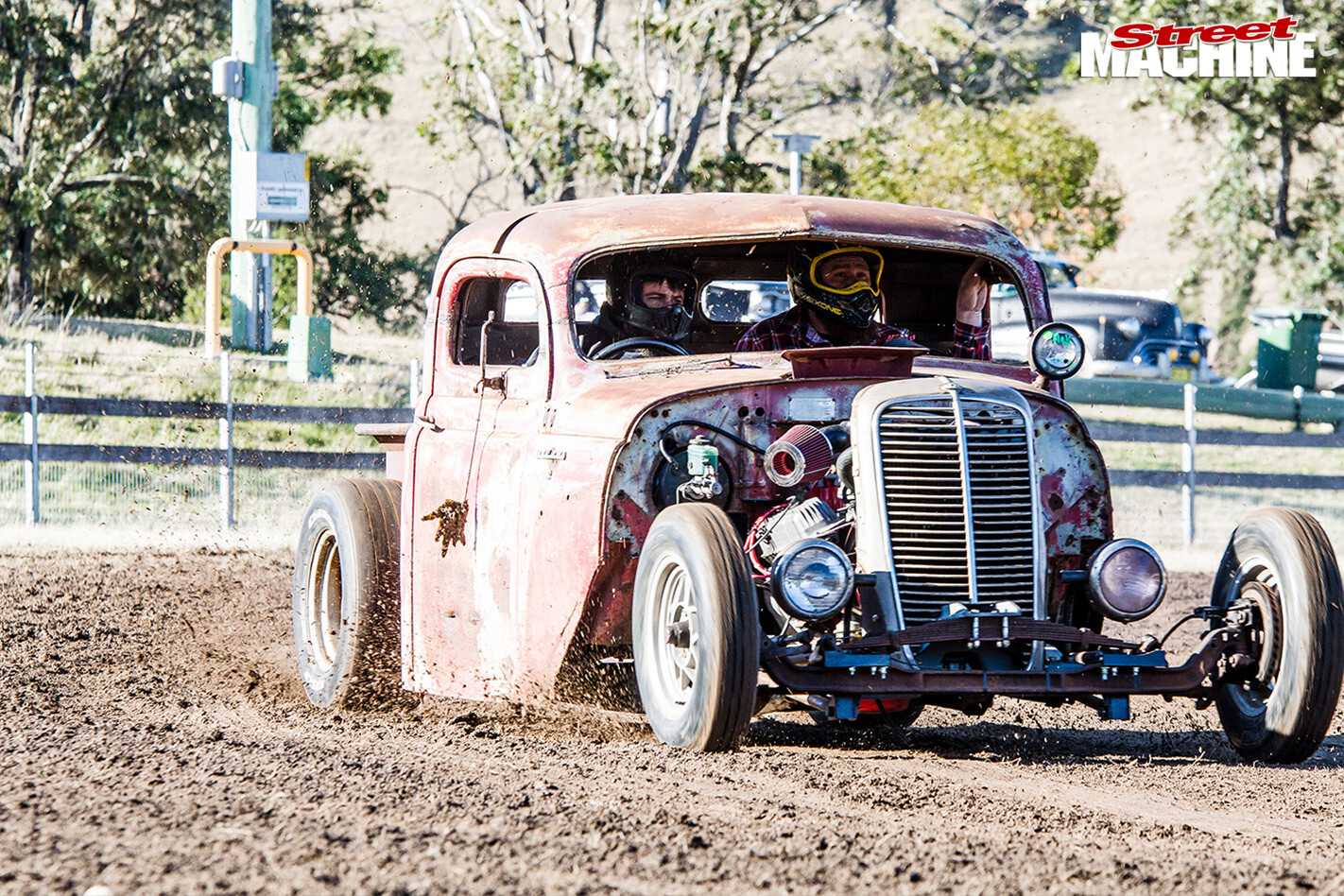 And that was another big change – even though the Mud Run’s overlords had sworn to keep their event free and invite-only, this year they had flung open the doors to the world and were charging for entry. And it looked like the world had turned up, too.

I parked my embarrassing hatchback as far from the bonfires as possible – after all, the wood always runs out, and the Corolla could prove too tempting for cold hot rodders searching for other things to burn. Besides, there was no way I could get any closer. It was Sunday and the Mud Run had unofficially been underway since Thursday; the place was now packed with caravans and tents, each with its own hot rod or custom snuggled up close. The Mud Run’s origins go back to a paddock eight years ago, when four mates from the Devils Hot Rod Club (loosely based in the Newcastle area) thought it’d be fun to make a track and do skids in their rods. It became so popular that within a couple of years it outgrew the paddock and they moved to Gresford Showground, which at first felt way too big for what was really just a family picnic with some killer cars.

But word spread, more invites were handed out each year and it grew and grew. Now, four years on, I was weaving my way through people like I was shopping on Christmas Eve, just to get down to the track. Gresford had now become too small. The Mud Run was off the leash. 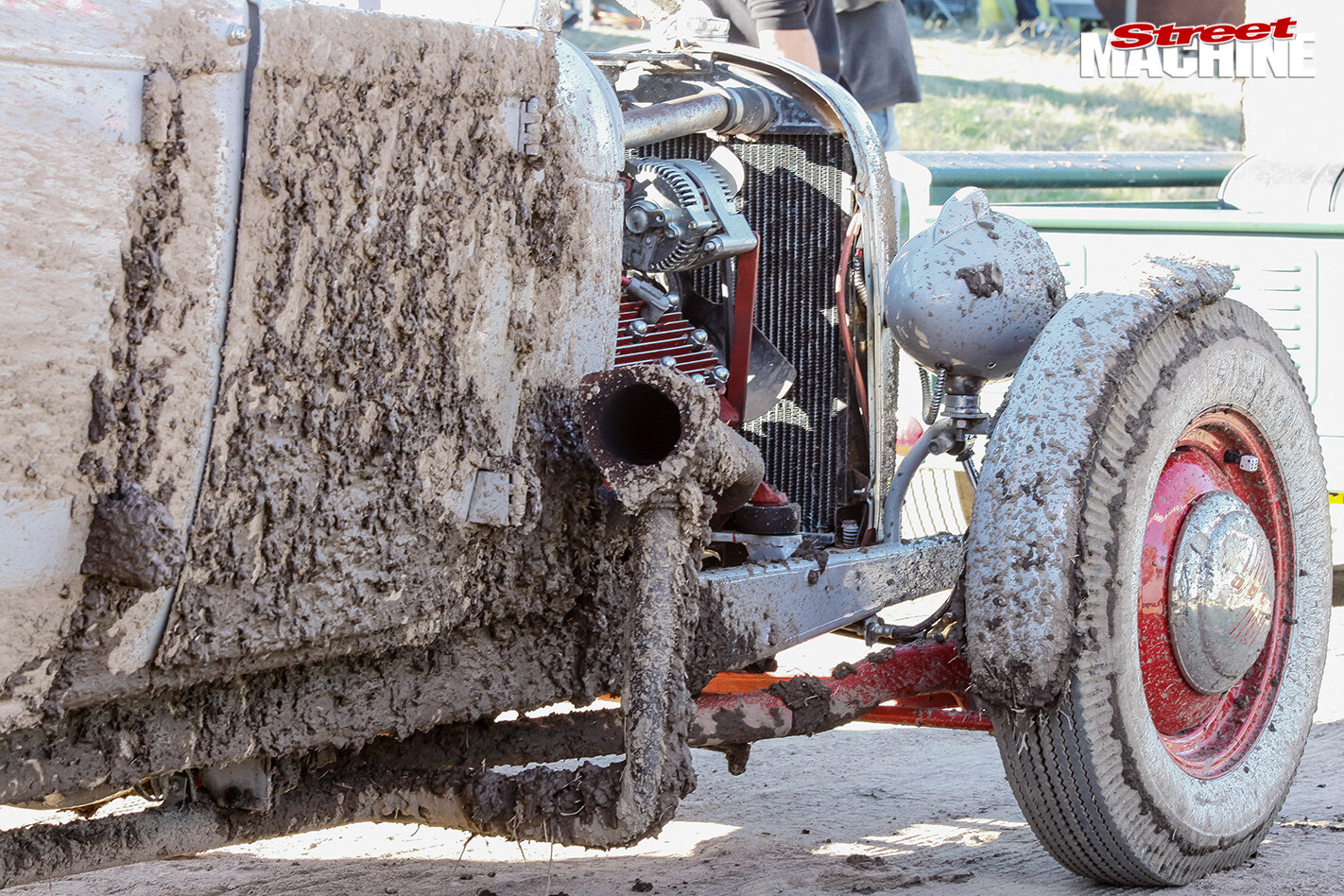 As I headed towards the track, in the distance I saw Tony ‘Webby’ Webster, one of the founding fathers of the Mud Run. Even he had changed. In past years he hobbled around with a cane barking orders; now he was approaching me on a quad bike wearing a bright orange helmet – he looked like RoboWebby. I asked him the usual question and he gave me the usual reply.

“Ask me when it’s over,” he barked over his shoulder as he rolled away. Down at the track I could hear the commentary over the PA system – that was new, too. “That green Dodge has been so fast all morning – oh no, it’s rolled!”

That wasn’t good – it was only 10am. I could just see the track by now, but there was no Dodge on its lid, just an EH ute very much the right way up and going hard around the muddy arena. Formula 1? What on earth was going on? I looked around to see if anybody else was as confused as me. Then I clocked it: a Hot Wheels track running down the hill – two lanes, 20 metres long, lined with kids clutching toy cars waiting to launch them, while Mark Hawkins, frontman for rockabilly band The Flattrakkers, called the mini-races over the mic. Mystery solved.

On the other side of the showground was another bunch of cars – real ones, this time – waiting to launch. The rules are simple: seatbelts and a helmet, buy a licence and join the queue. But there were changes here, too. Not only had one line turned into three, snaking almost out of the showground, but the cars were different as well, with more having been purpose-built for the Mud Run and looking like a roll call for the next Mad Max movie. But there were still plenty of brave, top-calibre rods and customs ready to get dirty. A standout was first-timer Nev Hodgson’s 1939 swamp green Chev pick-up, chopped and channelled and sitting on its original chassis, with a six-speed manual and an LS3 topped with a Cadillac air filter. Then there was Andrew and Natalie McClelland’s 1928 Model A tourer with a ’39 Mercury engine and triple-carb manifold. Or Nathan Kramer’s 350 Chev-powered 1963 Studebaker Daytona.

Nothing brings the most serious and least serious folks together quite like the bikes. Best race faces were worn by Mick Paice – his custom Triumph would only run on his drill battery and rejected the brand-spanking-new one – and Hillary Hoover campaigning her Honda Rebel. 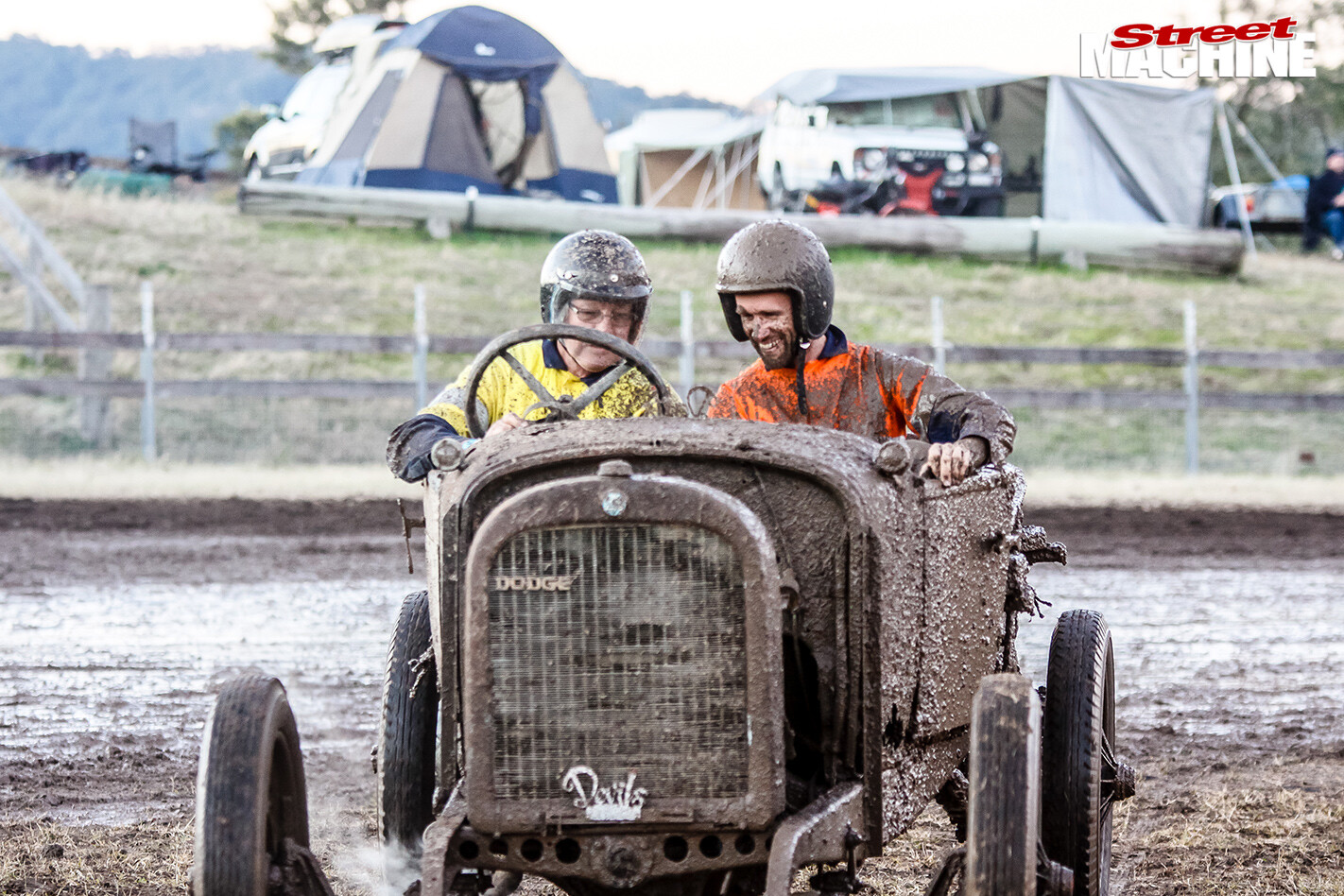 But the highlight of the day was the Mud Run’s now-traditional grand finale jalopy race. This year a record-breaking seven four-bangers went out, went hard and got muddy. As night fell, the day’s awards were handed out to weary warriors, The Flattrakkers kicked off and I went in search of Webby and the event’s other two founding fathers, Joal Butcher and Stewie ‘Soup’ Campbell. What were their highlights this year?

“For me it was the jalopies,” Stewie grinned. “And because we had so many it was hilarious.” Webby went on to explain that the decision to charge for entry came down to the ever-increasing costs of insurance and running the event. “Each year it improves, but it costs you to improve,” he said. “And sooner or later we had to make a call. By charging $20 we’re not making $20; I see it as the punters paying for their own insurance. We had at least 1000 here today – we’re at the limit.”

Joal said that by opening up the doors it kept the event healthy and ensured more of Australia’s coolest cars could join in. “I’d been to Chopped and other events and saw some amazing cars, and because we’ve been invite-only for so long I wanted to attract those other sorts of cars. It’s so good to see how big it’s become.” What do you get if you cross a 1959 Lloyd Alexander with a 350 Chev, big cam, Turbo 400, 9in diff and a Suzuki chassis? You get the Hard Luck award - just ask owner Scott Ribbons. Those who were there know what happended! 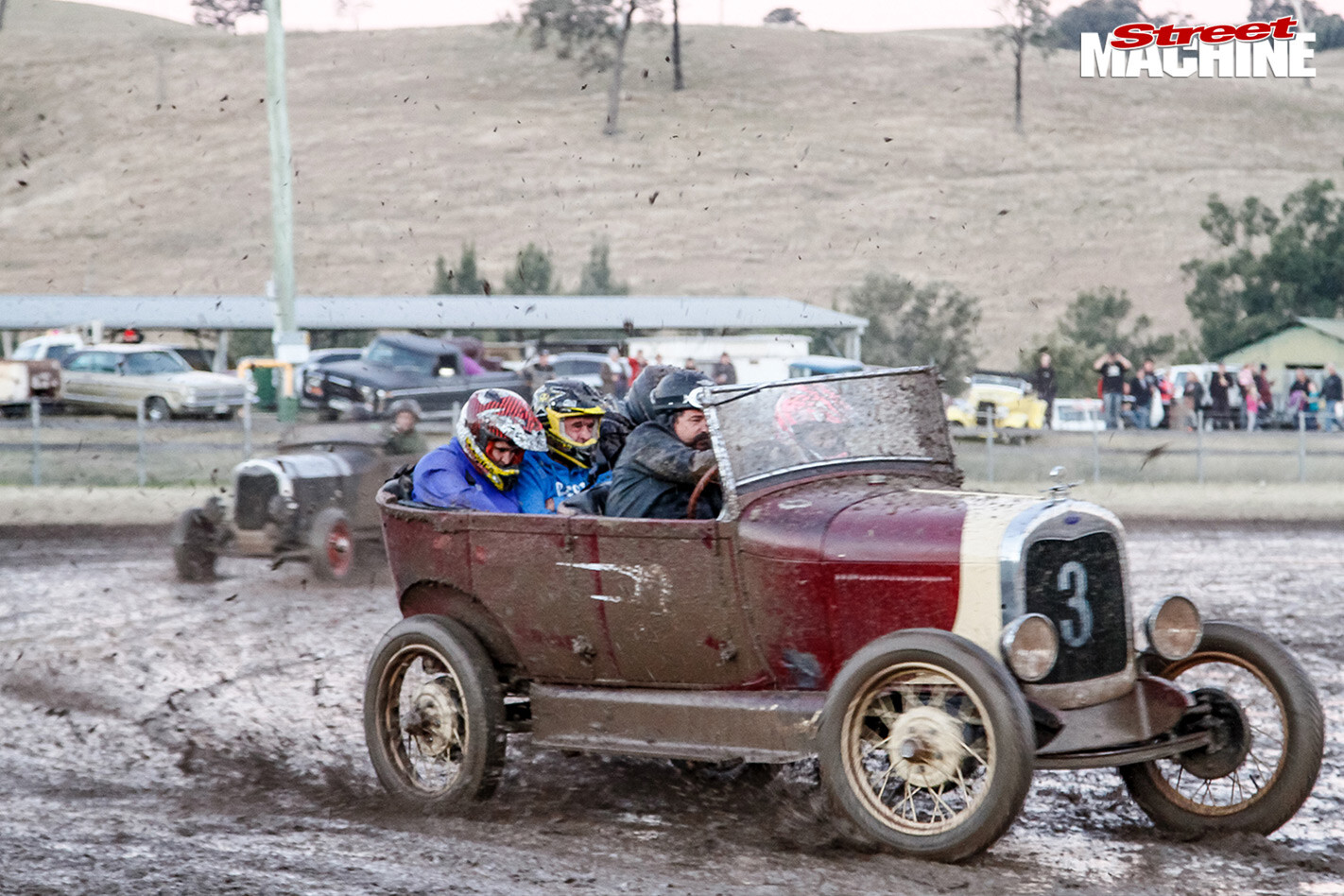 Alan Hale's 1928 Ford tourer made its maiden voyage at this year's Mud Run. Alan is currently building a tudor that is going to be a whole lot sweeter than the tub, complete with a Roof-headed four-banger Chad Presbury and Craig Beatty took the easy-clean approach to safety wear. When asked whether they suffered any ill effects due to increased wind chill, the pair declined to comment Travis Constantine pilots his Ford Model A Standard coupe. There's a 1928 'banger engine in there with 97 Strombergs, hand-made linkages and exhaust, original 16-inch wire wheels, all on a stock-as-a-rock Model A chassis. Travis only discovered a few days out that he had three gears for reverse and one going forwards - the diff he'd bought had been assembled back to front! 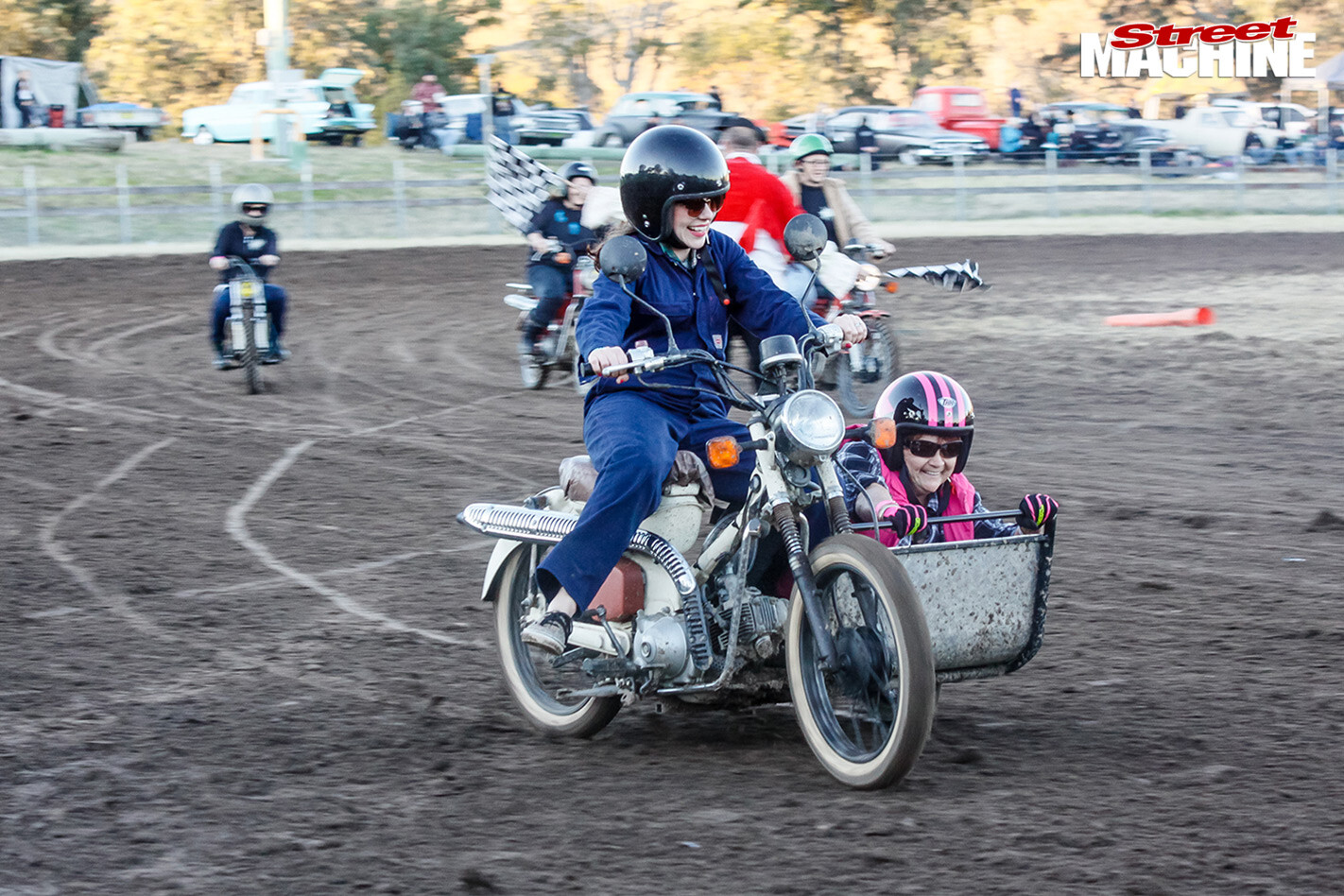 Nadia Batey (in the saddle) and Pink Lodge (in the sidecar) amazed and terrified everybody. Pinky took out the award for Best Female When Luke Thomson bought his '28 Model A roadster it had an 80s paintjob; he liked it so much he had it repainted exactly the same Jesse Davison's 34 Chevy pick-up prepares to dive back in. One of the favourites of the day, Jesse pushed the beast hard Joel Rodriguez won the Long Distance award - he towed this pillarless XL Falcon with another XL for 14 hours from Sunshine, Melbourne. On the way home, the 'tow car' made it as far as Goulburn before giving up the ghost, so the roles were reversed