ELECTRIC DRAG RACING AT PRI2016 - THE FUTURE OF PERFORMANCE

It's hard to escape technological advancement, especially when it comes to the pursuit of speed. The Performance Racing Industry trade show that takes place every December in Indianapolis is the perfect place to see this firsthand, whether it is more powerful petrol engines, new materials for racing components, or in some cases, alternative power sources.

The guys over at the National Electric Drag Racing Association (NEDRA) know a thing or two about pushing new technologies to greater limits and with two decades of experience, plus involvement from big names like 'Big Daddy' Don Garlits, they're gaining serious momentum as a sanctioned organisation under NHRA.

"Next year will be our 20th year," NEDRA President, John Metric, explained. "It started with a few dozen guys, mainly from the West coast that loved the torque and the fact that it was also 'green'. They decided to get together to form a drag racing association to get the rules more in line and to help keep everyone on level footing." After initially forming in 1997, NHRA added electric vehicles (EVs) to sanctioned racing in 1999 and since then NEDRA has worked alongside NHRA and other racing associations to help develop EV drag racing. 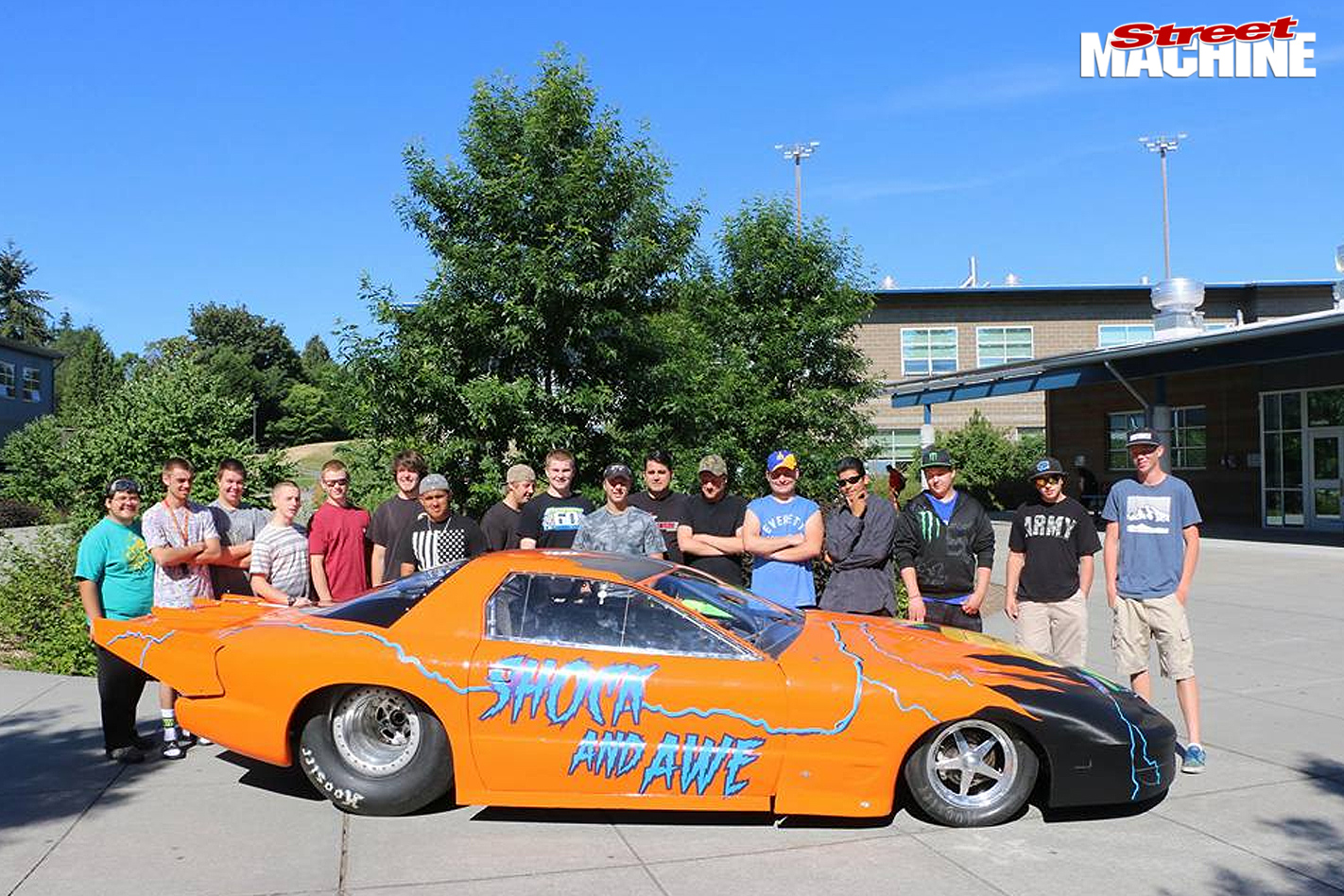 NEDRA classifies racers under body type (Class) and Voltage Division. Classes are categories like Dragster or Street Conversion (factory petrol cars converted to electric) and there are even classes to denote vehicles built by high school students (HS) and trade schools (ED). Voltage Divisions are based on power output and range from a motorised Esky-style J class of 26.4 volts or less all the way up to A5, being 600 volts or more. NEDRA has also recently started points championships, where racers can compete locally and even against petrol-powered cars to win points for an overall season win. Pictured above is Shock and Awe, the 2016 NEDRA Points Championship Series winner. It's an Extreme Street class car, running in A5 Voltage Division, and it was built by high school students from Bothell, Washington. Driver Pat McCue took home the trophy alongside a new class record set this year at 8.32@166mph. 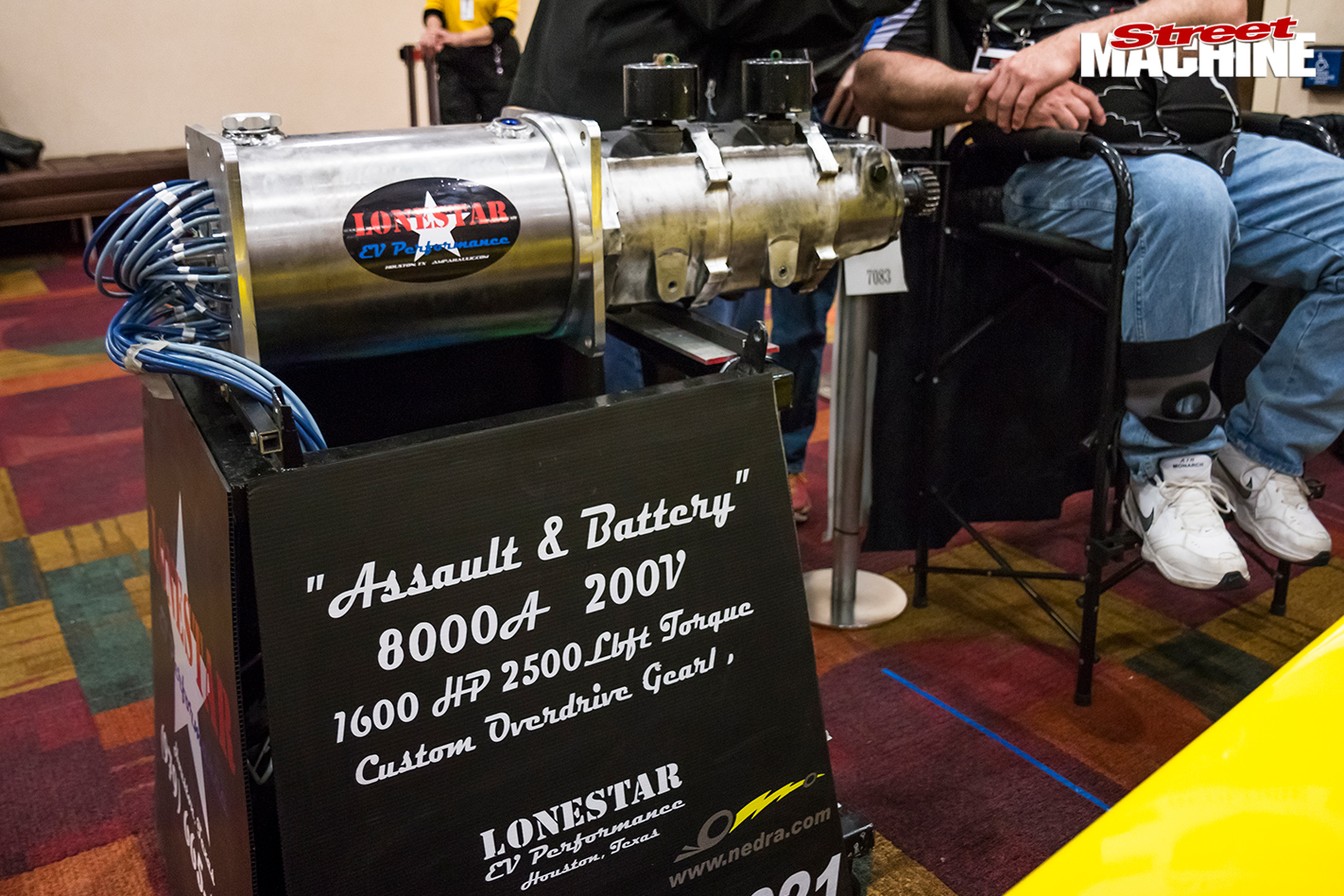 Power output is not measured in kilowatts but rather in volts, for example, Don Garlits' Swamp Rat 37, which is a 7.27@185mph electric dragster, has a power output of 409 volts, roughly 1500kW! While Big Daddy's low 7s might be impressive, the current NEDRA-recognised quarter-mile record is a stonking 6.94@201mph by Larry McBride and his 355-volt Rocket. 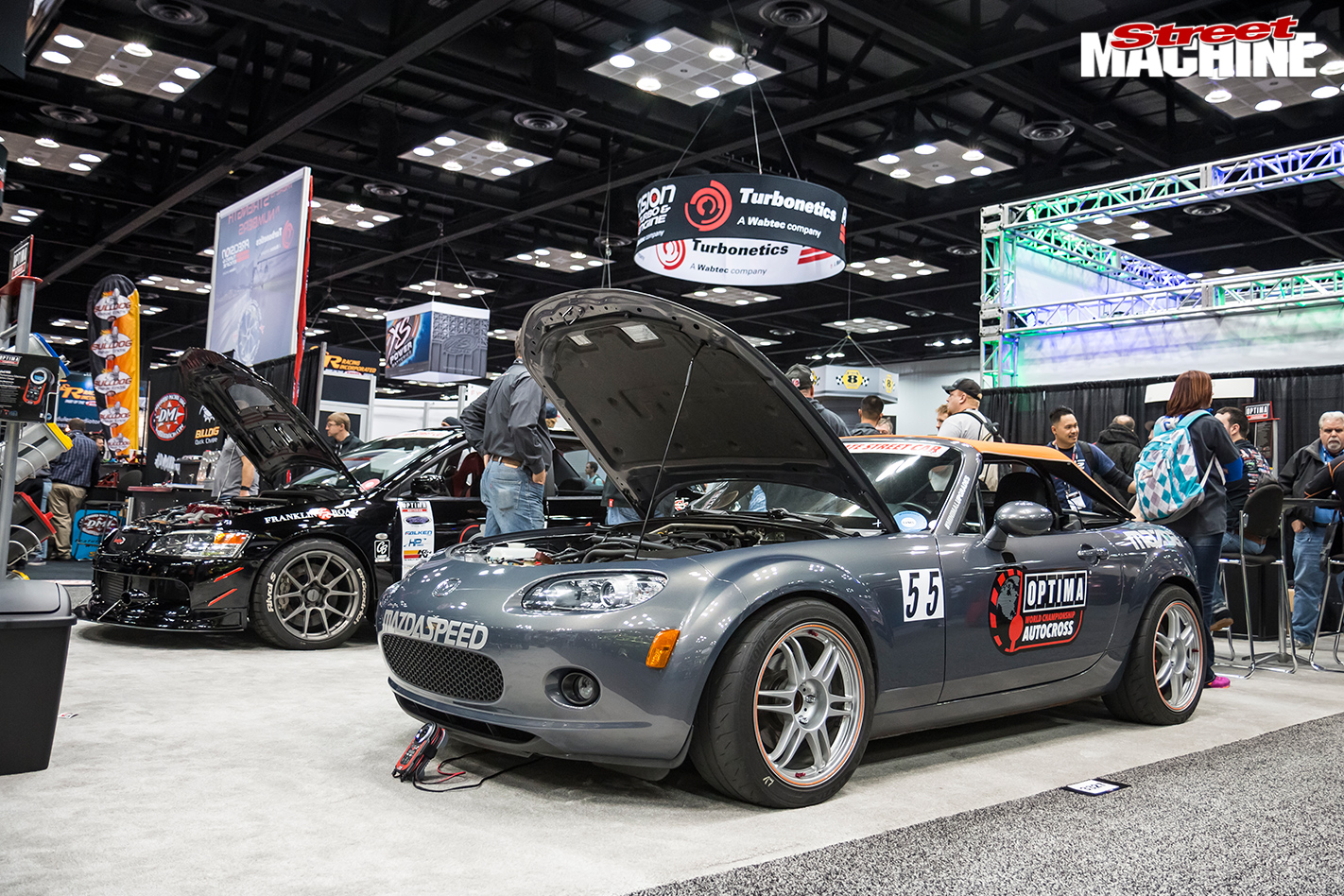 Just as in petrol racing, not everyone can splash the big bucks like the top tier guys can, and John explains that membership in all ranges of racing Voltage Divisions is growing more than ever – the growing availability and ease of converting to electric even for standard full-bodied cars is getting more people stoked on electric drag racing, and the extreme torque and low maintenance are massive bonuses for the electric game. With 100% torque at zero RPM, and around 25-cents cost per run (just recharge the batteries from a power supply), racing is more exciting and accessible than ever. Imagine not having to change oil, rebuild parts, or even fork over hundreds of dollars for high-octane fuel, and still run sevens! 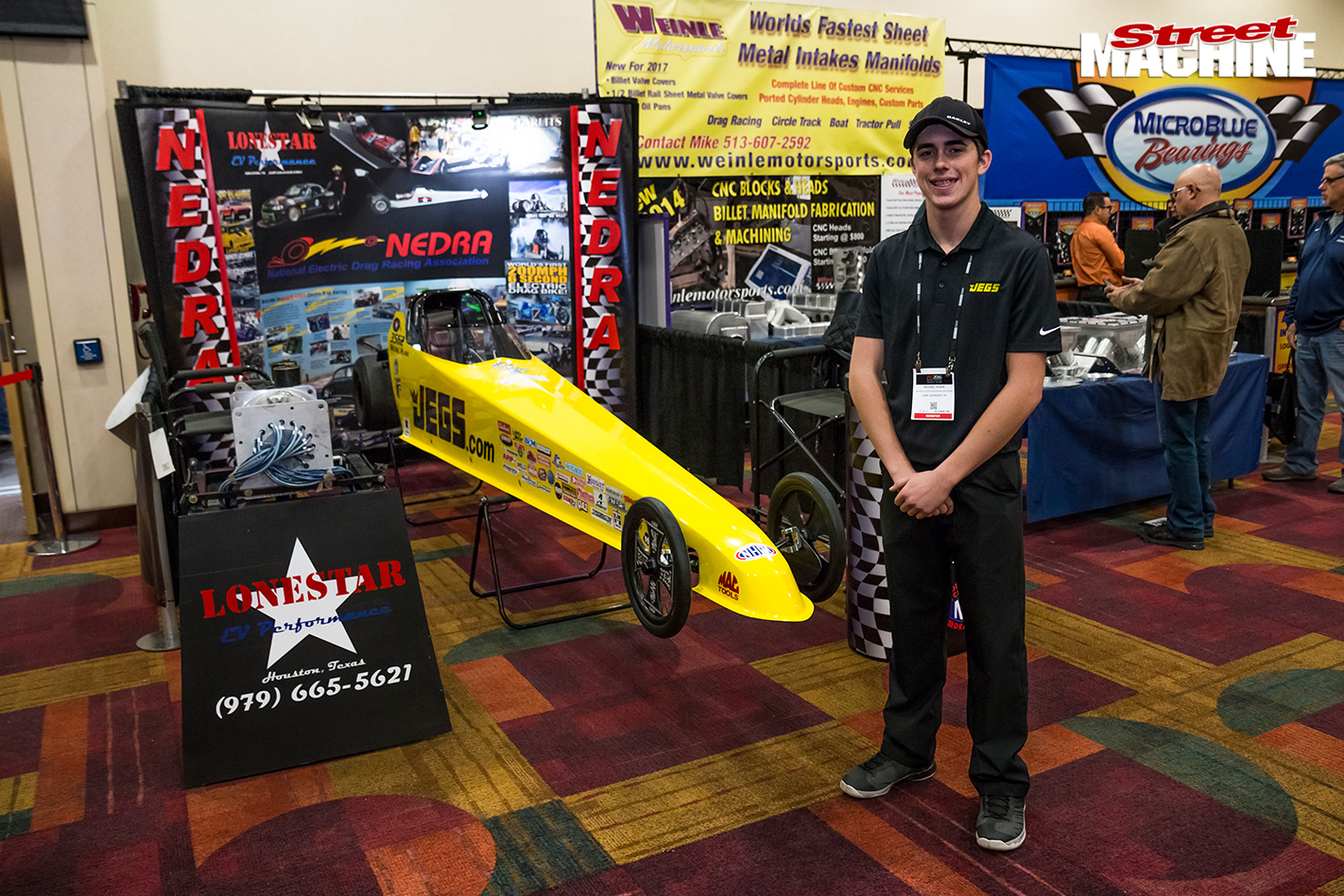 NEDRA was actively promoting just that at PRI this year, debuting the $8999 electric motor kit available for purchase from speed shop giant Jegs. The kit comes with everything you need to power a junior dragster and the guys can even provide support when it comes to installing it. It's also the junior generations of racers that are drawn to electric racing as the future of speed, and one teen speed freak spreading the electric gospel at PRI was 16 year-old Michael Ruark. It was his electric junior dragster on display in the NEDRA booth, so we had a quick chat to see what it was like from a racer's perspective:

What was it that made you get into electric drag racing?

We all know kids my age are a little stubborn – I like to do my own thing, and with [the electric motors] you take out all the variables of your dad or crew or whoever having to fix parts constantly, worry about gas or ongoing costs. You just work on a tablet to maintain it and everyone knows kids are a little smarter on tablets than their parents! It's all you and what you do to the car. If something happens, it's my fault, and I think that's important – it's that point that gets a lot of stubborn race kids into it [laughs].

This is your car specifically?

Yeah, this is my junior dragster. It has 39 batteries powering a NetGain motor and can produce up to 144 volts. It's limited to 77 volts for junior classes and it runs an 1/8th-mile in 7.90sec at 85mph. We can print out 7.9-sec time slips from one track to the next – Texas to Ohio – without changing anything in the settings. I have another one which is gas, but I prefer this because it's less hassle, less maintenance – you come back after a pass, charge it, and take off when you get called again. That's it! 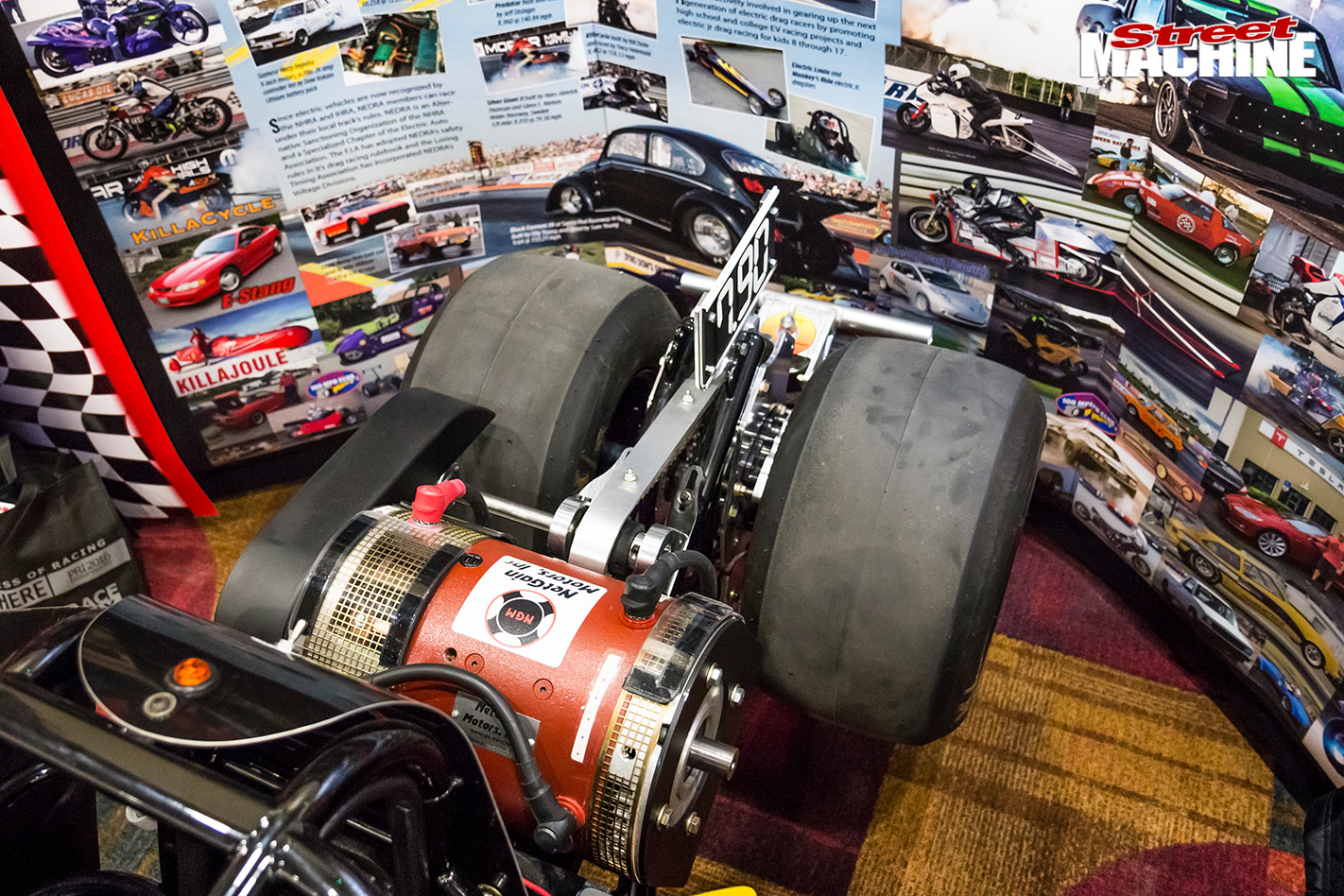 What's it like to do a full pass in it?

It basically sounds like an old wind-up toy you'd have as a kid. With all the settings we have right now, it takes off slow but then it's like a turbo car and pulls real hard once it picks up. It's not an aggressive launch which puts you back in the seat and beats you up but a nice cruisey start. We can change it to go real hard off the line but that'll just break the tyres. It's running super consistent and set up exactly how we want it.

What's your standing in your NEDRA championship?

I'm currently four-time junior champ at National Trail [Ohio], my home track. I'm 16 so I'm in the advanced class for kids 13-17 and we're only allowed to go 7.90. Our goal for next year is to win a championship with [the car] and if we can do that it'll be great to have everyone notice what we're doing with the electric motor kit we're selling. The way we look at it, it's the new way of the future. It's green, planet-friendly, a lot more efficient and a lot less maintenance. 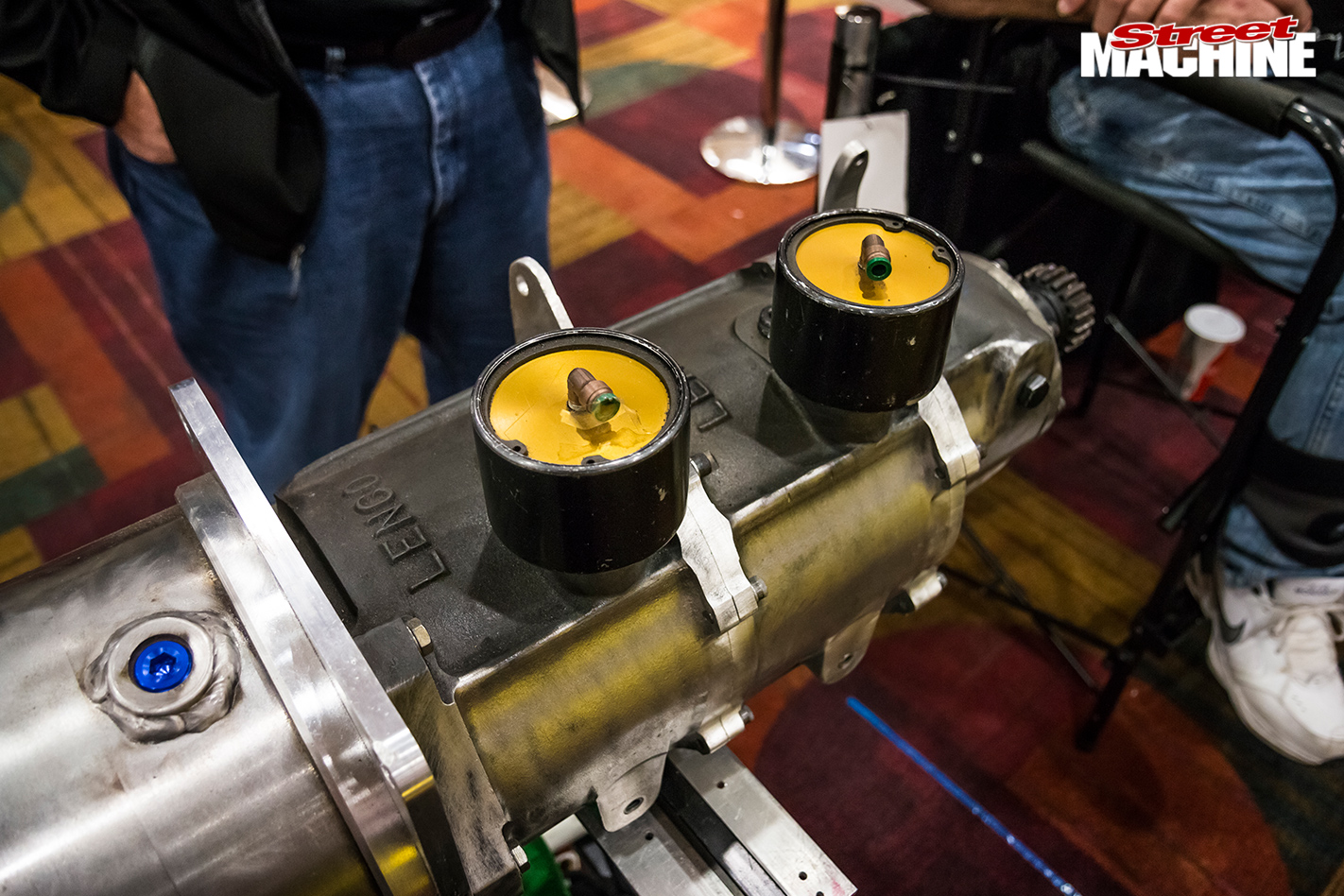 Do you get any crap form the petrol guys?

We really don't get any! Everyone seems to like it. They agree it's the way everyone's going and they're always shocked we have one that's running really well and looks good, not just a bunch of batteries stuck on a car. There's always someone like "Wow! When can I get my hands on one?" 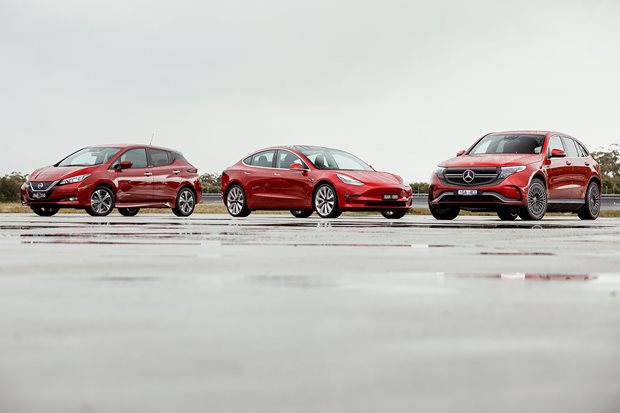 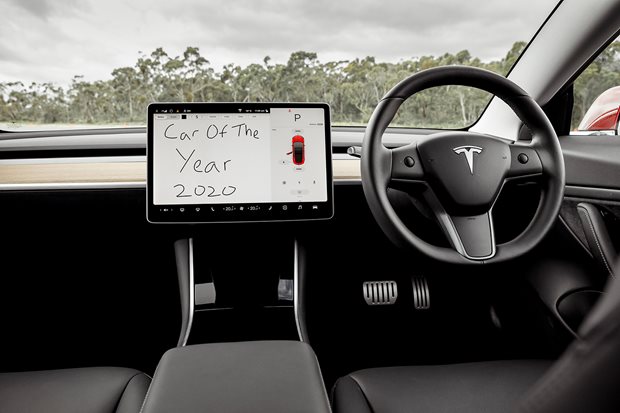