THE inaugural Northern Nats went off at Springmount Raceway near Cairns in Far North Queensland last month. A ton of cool cars came out of the woodwork, and some of the best burnout rigs in the business made the trek up from the southern states. With over 250 entrants and 10,000 spectators, the first event was a hoot, and we can only see it getting bigger and better in the coming years. Look out for the full feature in the July 2016 issue of Street Machine, on sale Thursday 16 June! But for now, here are some of the highlights. 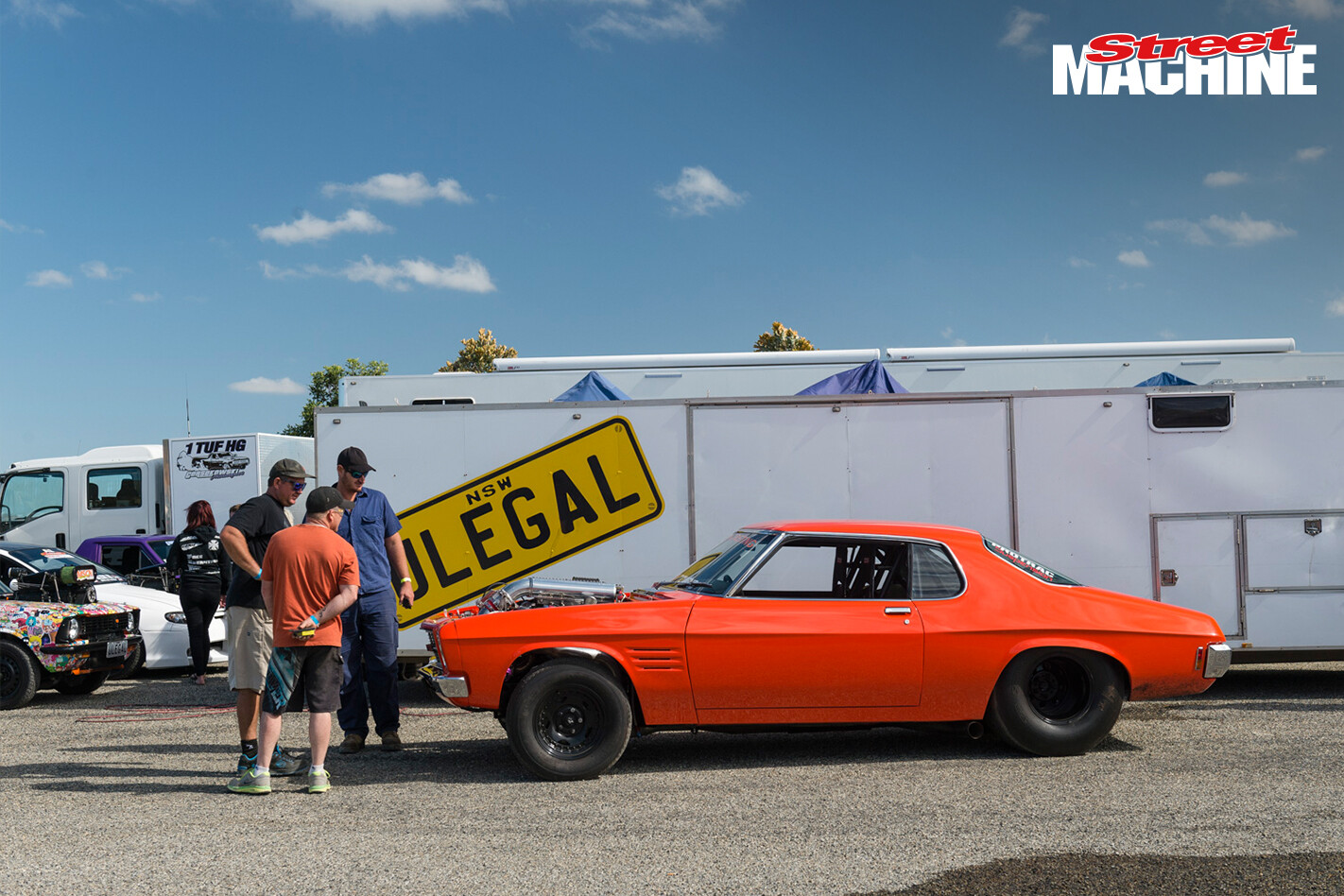 Imagine coming across one of these trucks packed with precious metal while on the road in the middle of FNQ! Matt Smith’s crazy little Morris Minor ute has a small-block Chev crammed in the nose, and it pulled off one hell of a powerskid!

This twin-engined plumber’s van didn’t last too long on the burnout pad, blowing one of its engines shortly after its three-wheeled tip-in. Not only is there a blown big-block jammed inside Chris Grant’s insane little Goggomobil, but if you look closely there’s two big blokes in there too! 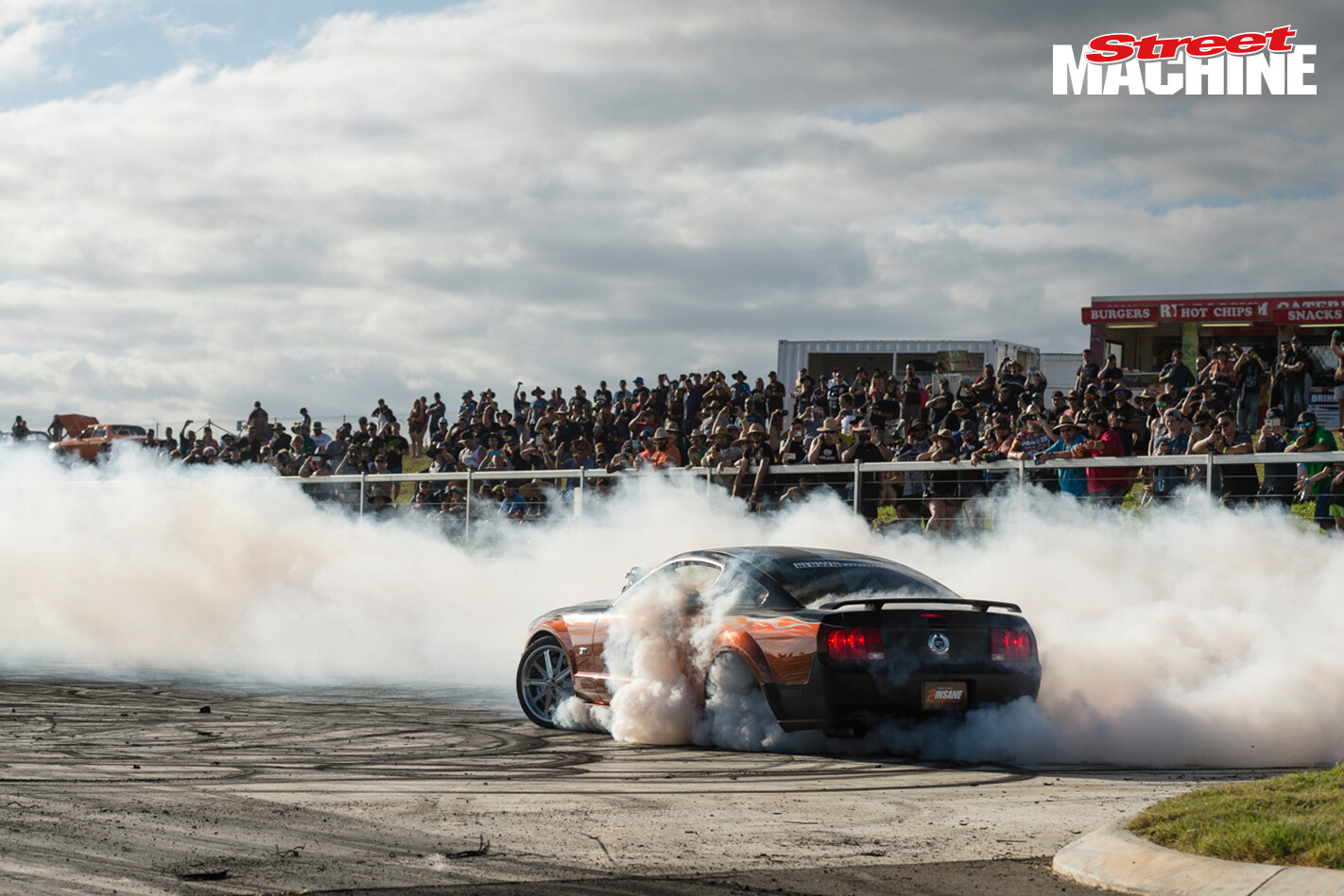 Gary Myers tore up the burnout pad in the 2INSANE late-model Mustang. It was one of the first blown cars on the pad for the weekend, and the going was so slippery Gary just feathered the throttle for most of the skid. Surprisingly, there were no burnout fires at Northern Nats! Paul Cook’s flaming exhaust on BLWNVC was the closest we got. Trevor Smedley’s Pro Mod Camaro was the quickest car in the drags for the weekend, running a 7.33@199mph. How he got the 2200hp 16/71-blown 540ci monster hooked up on such a slippery track is beyond me. 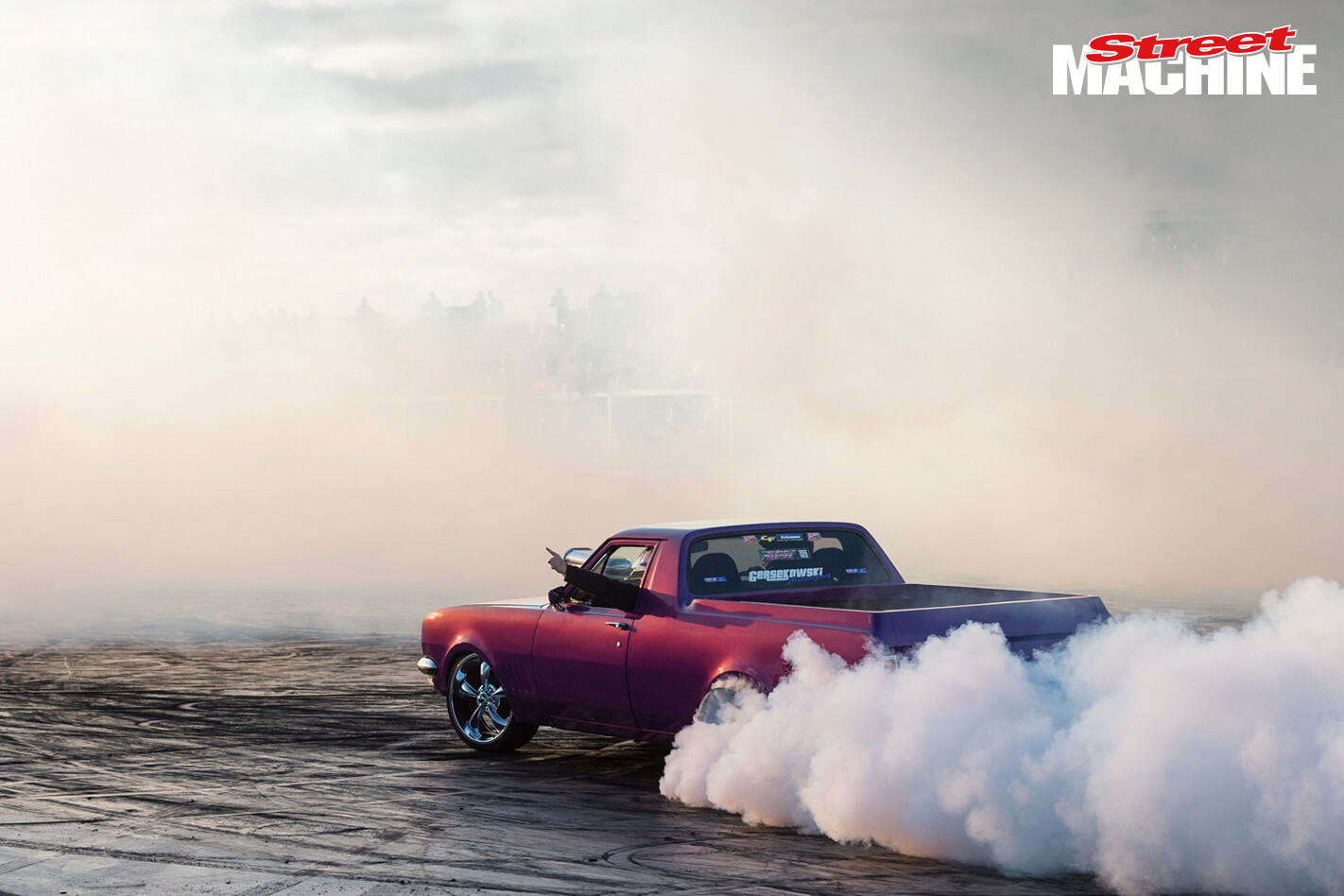 Warren Gersekowski’s 1TUFHG looked incredible at sunset, but was soon sidelined by an engine bay fire. 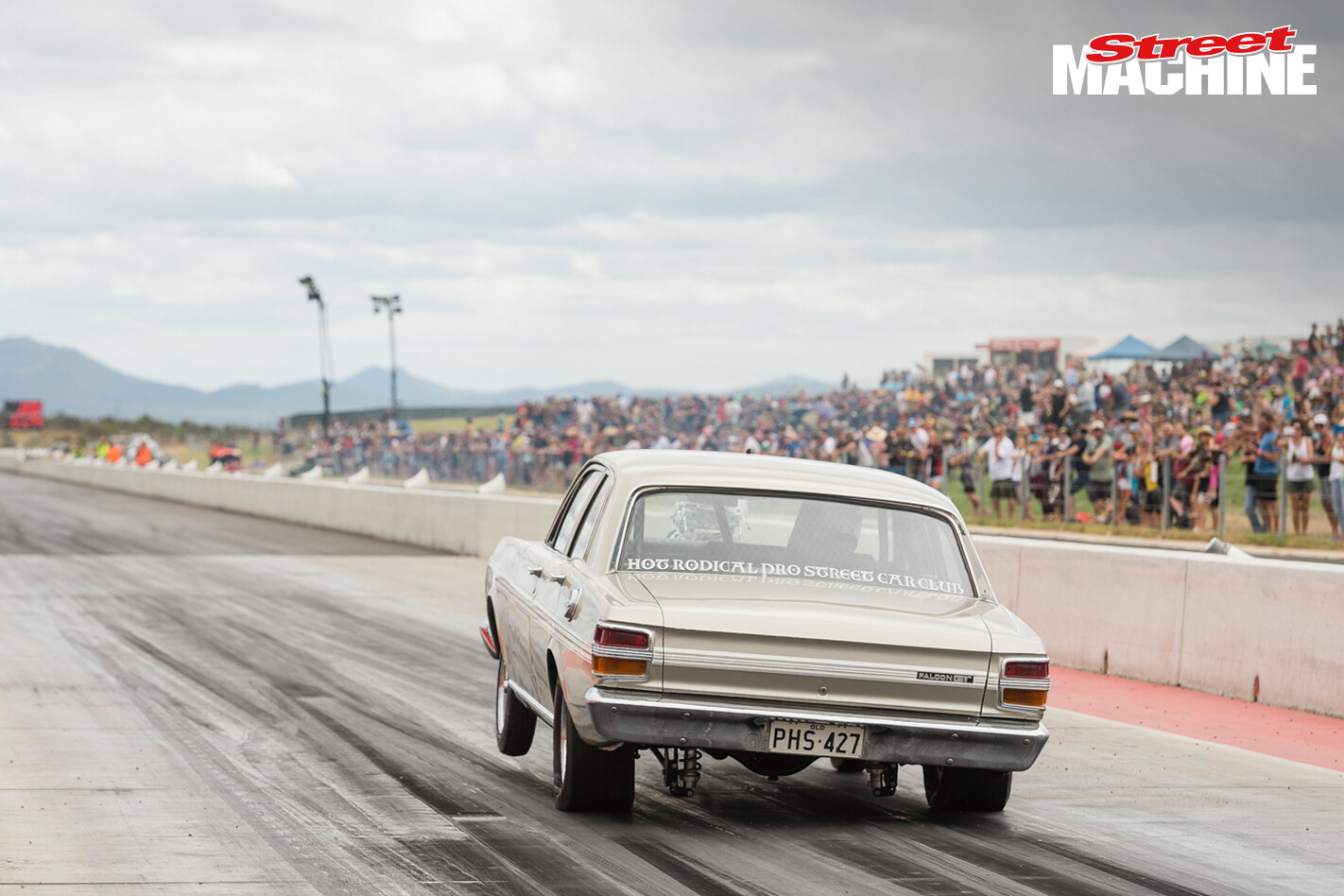 Geoff Clarke’s XY was a standout car from the event, packing a 427-cube small-block Windsor with an 8/71 blower stacked on top. It has run a best of 10.6@130mph and rips a pretty decent powerskid. Understandably, Geoff didn’t want to risk smashing such a stunning car in the burnouts. Thoughts on Mick Brasher’s mad new sticker-bomb wrap on the ULEGAL Datsun? Mick didn’t make it through to round-three skids, hurting his engine on Saturday. 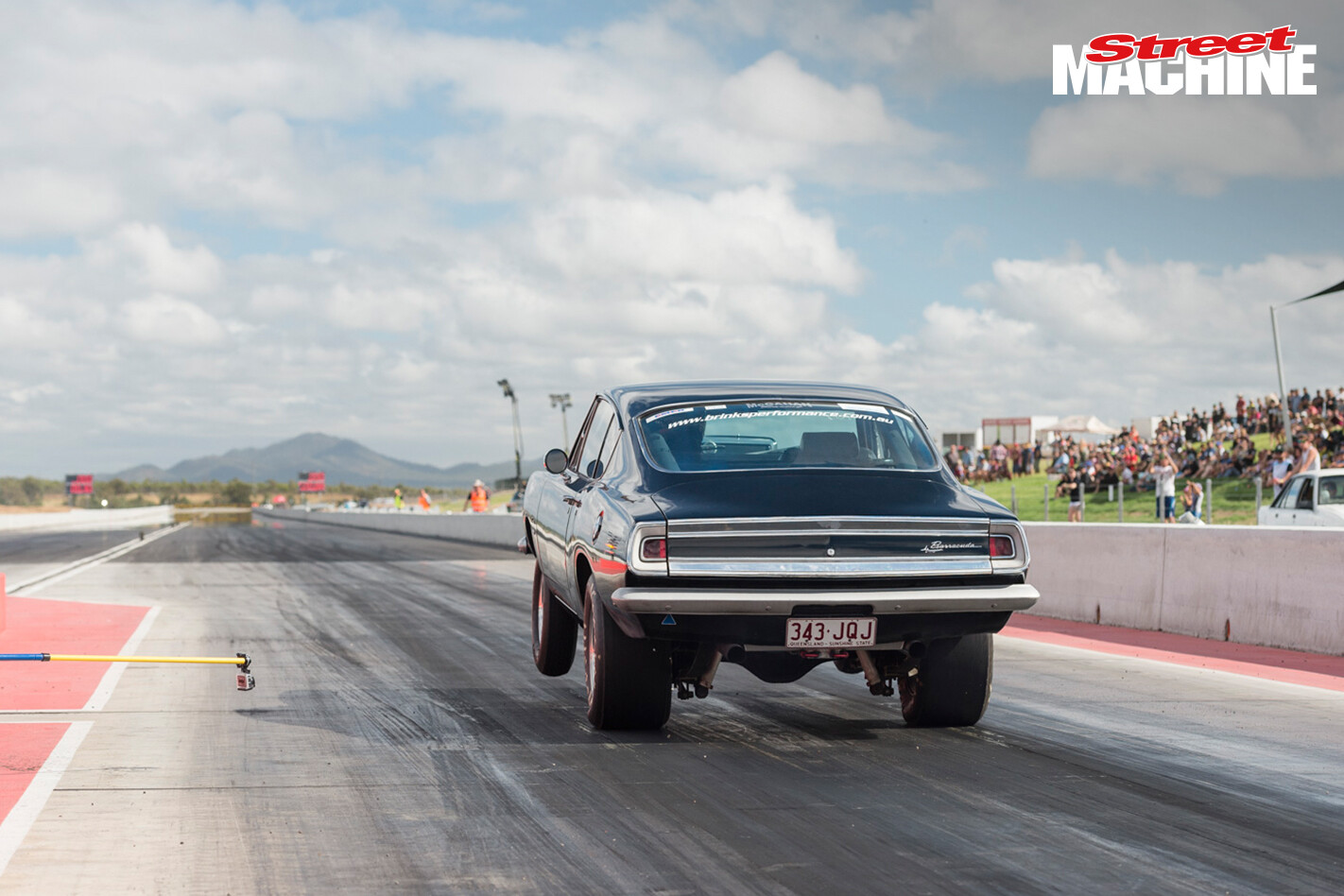 Darren McGahan’s Plymouth Barracuda runs a 422-cube small-block Chrysler and had no trouble plucking both front tyres clean off the tarmac while running nines. Nik Fraser was faultless all weekend in the blown MELTEM Corolla, pulling off some pretty crazy manoeuvres. Chris Gofton’s AGRO XY competed in everything from the drags to the powerskids and burnouts. It’s powered by an 8/71-blown 351 Windsor, and won Top Engineered, Top Competition Vehicle and Car of Show at Northern Nats this year. 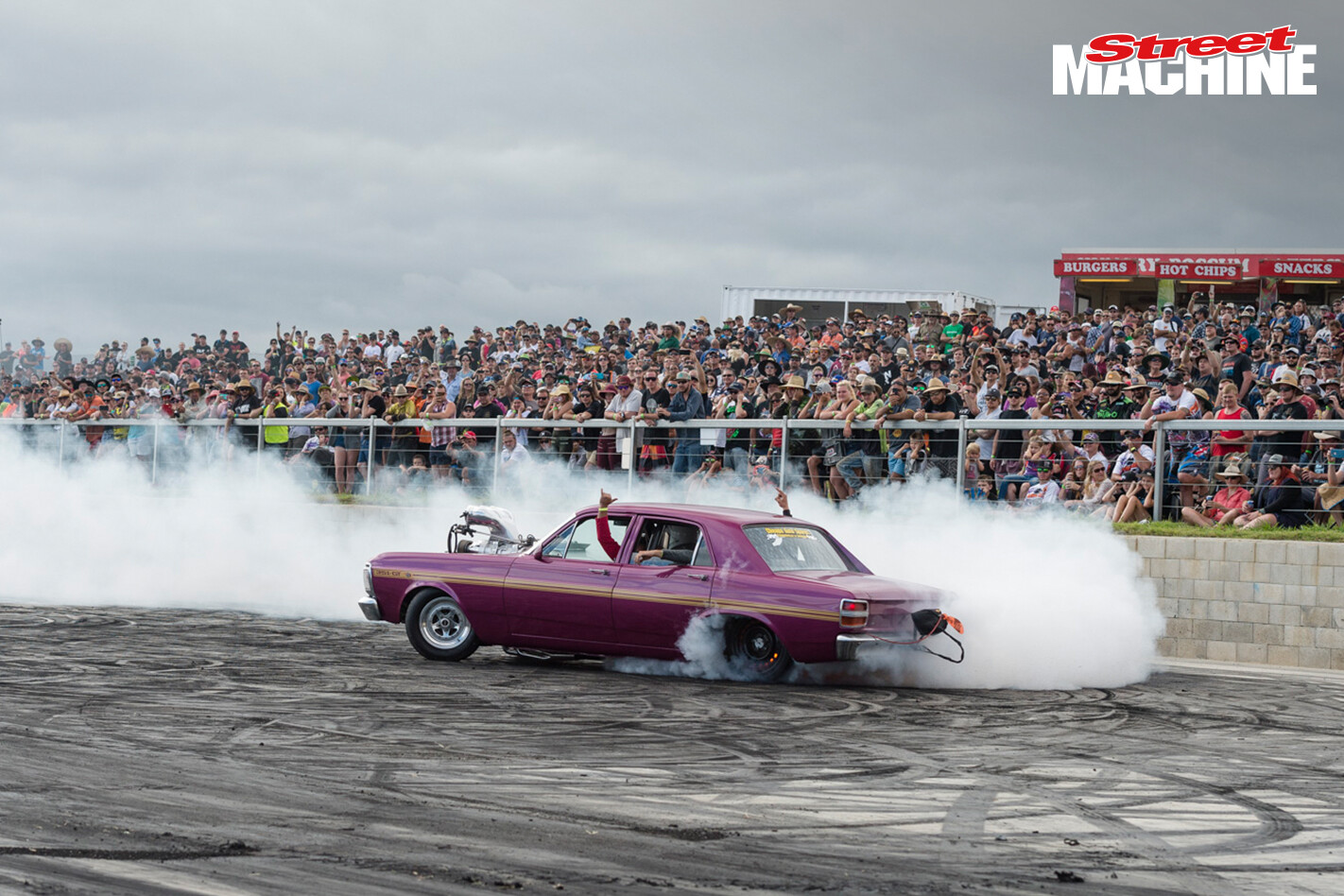 Here’s Chris’s XY competing in the burnouts, complete with parachute and all! As you can tell by the glowing discs, Chris fried the rear brakes, which meant he couldn’t stop when drag racing later in the day. He had to be pulled from the gravel trap twice! 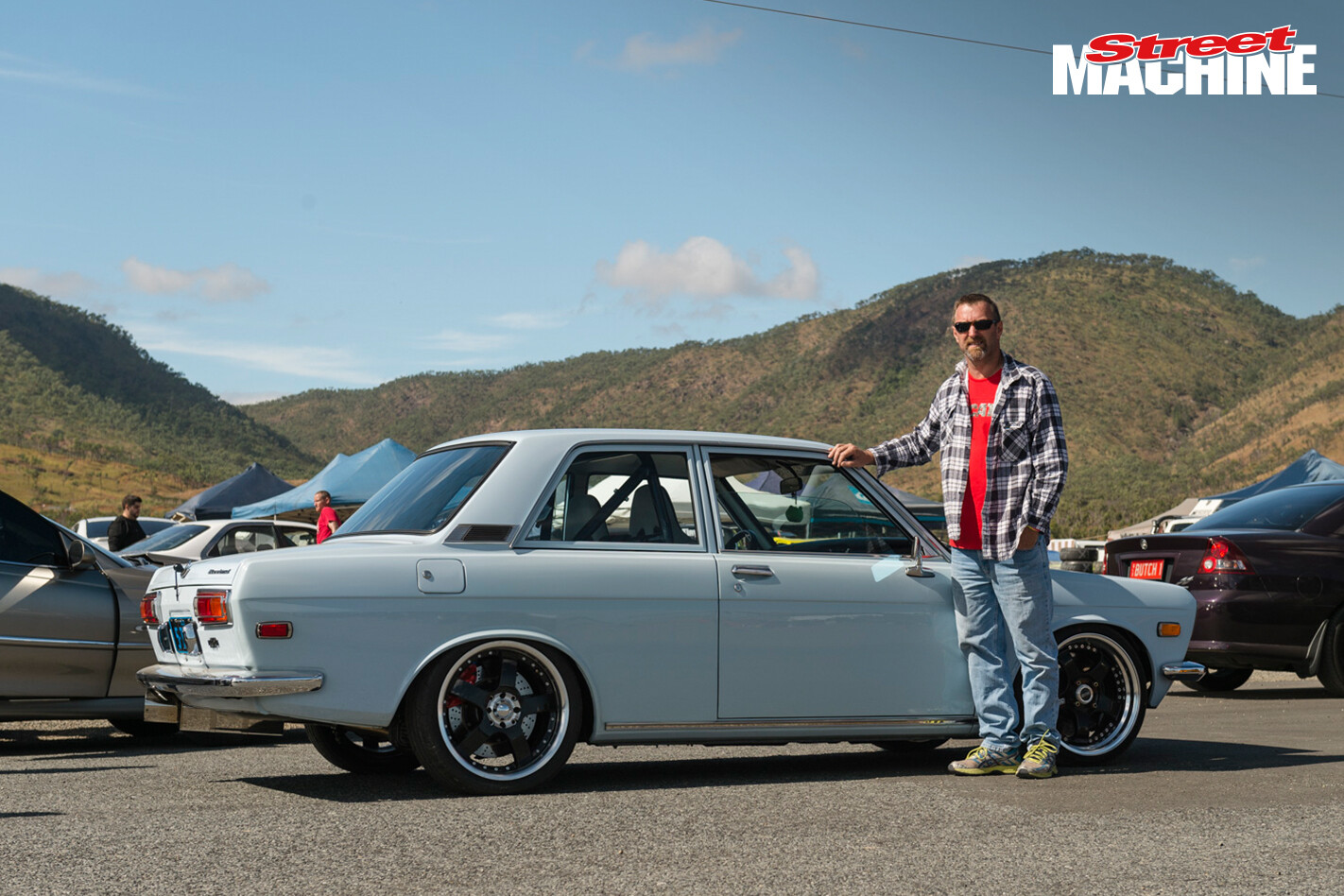 This cool Datsun 510 coupe is powered by a turbocharged Nissan SR20 motor and was imported by owner Andrew Knights from America (hence the left-hand drive). Northern Nats was his first time drag racing the car and he was stoked to break into the 12s by the end of the weekend. 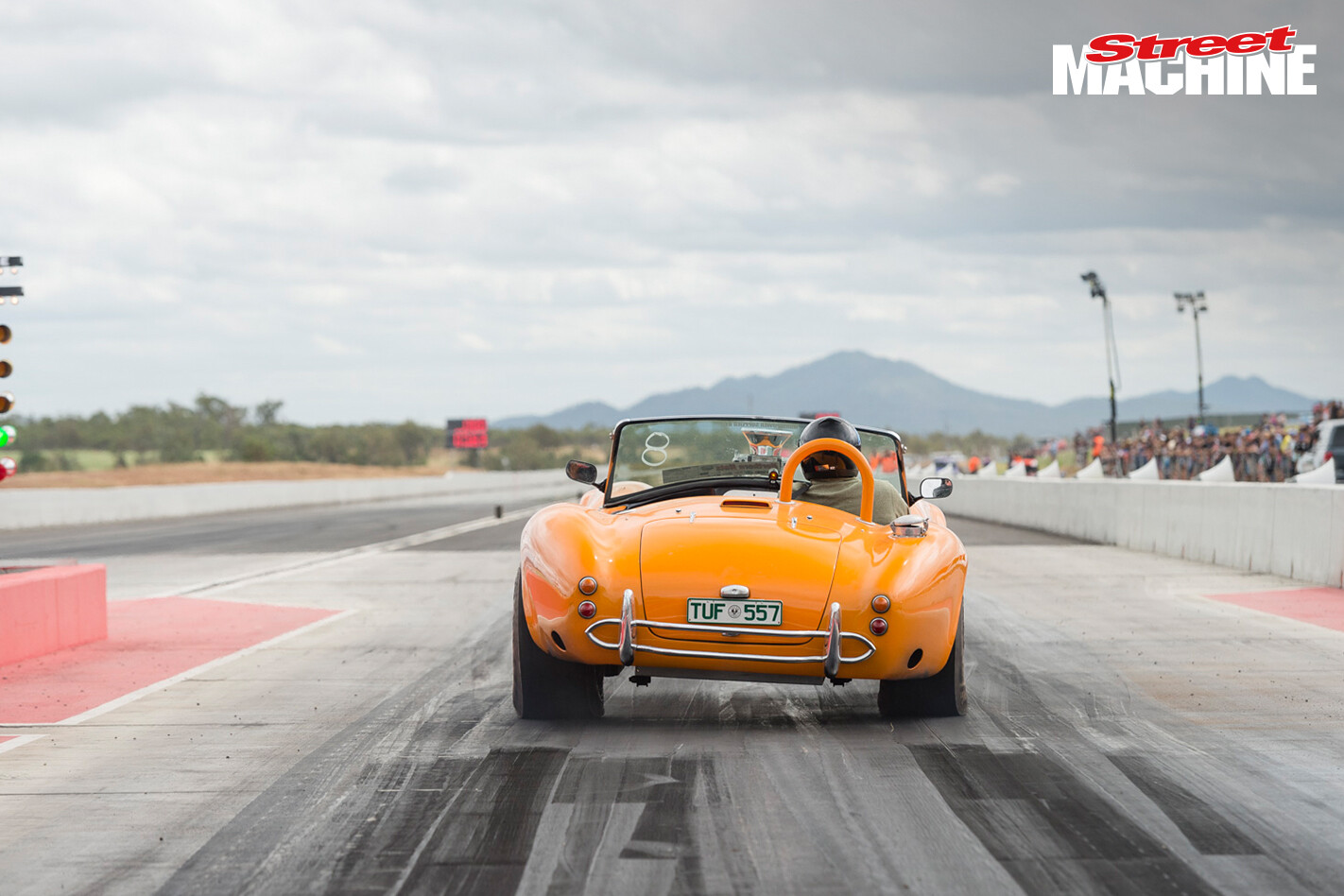 Talk about a big engine in a little car! Greg Hood’s Shelby Cobra replica is packing a mammoth 557 cubic inches of big-block Ford goodness and consistently runs low 10s down the quarter. This awesome HT Monaro is owned by Cairns local Nigel Davidson. Without anywhere to race up until now, Nigel and the Monaro had only hit the track three times, but at Northern Nats they made up for lost time, running a 9.5@142mph. Gary Myers took out the gong for best powerskid in the 2INSANE Mustang, easily spinning the rears for the full quarter-mile. Andrew Lynch and Steven Loader decided to swap cars on Saturday arvo. Here’s Loader in Lynchy’s Corolla. He grabbed neutral twice and snapped the driveshaft out of the diff housing, but Lynchy got revenge by breaking Loader’s transmission later that night. Oops! 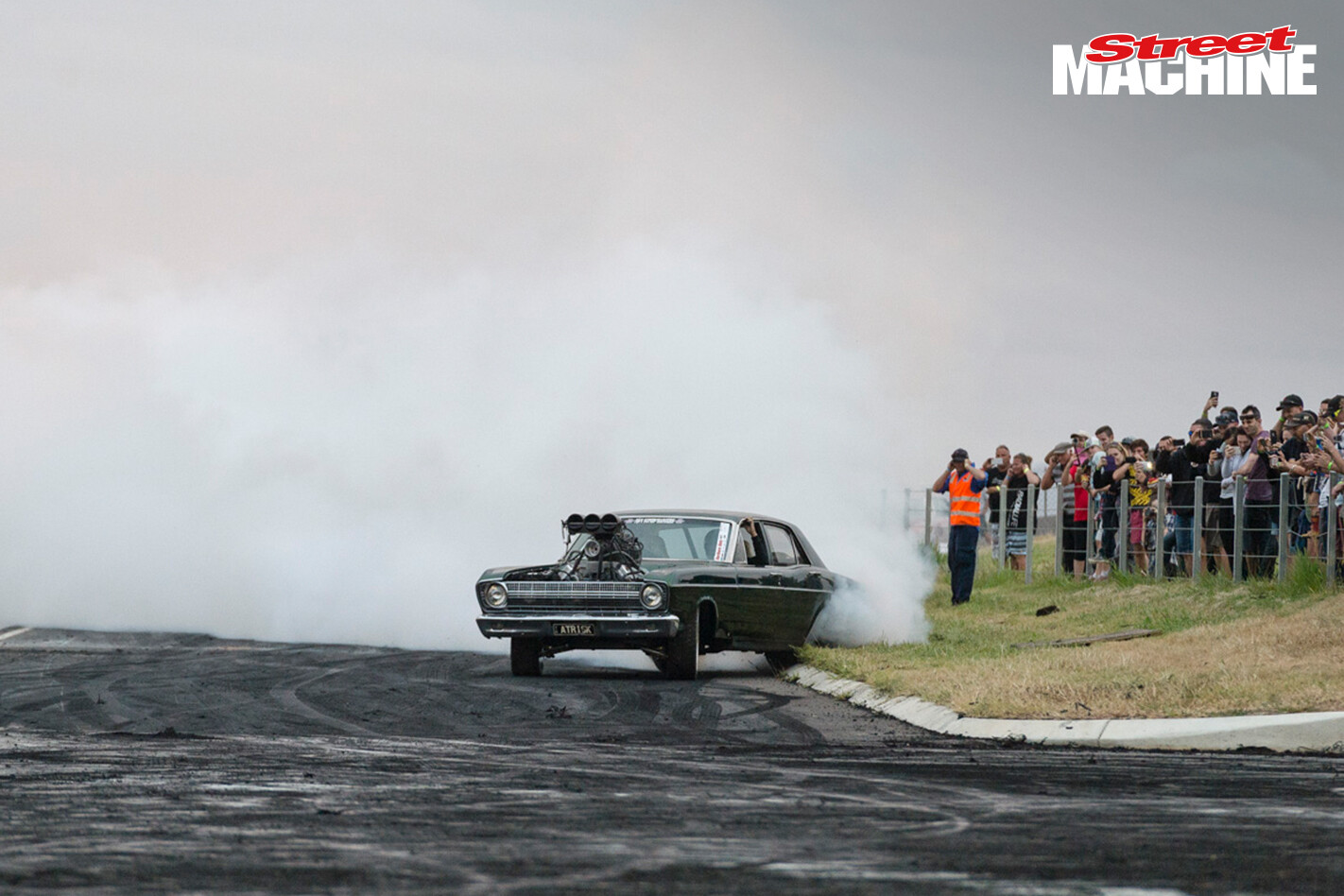 Peter Grmusa wrestled with his 2000hp 700ci XR Falcon – with no brakes. It was pretty sketchy, but Grmusa still finished his skid and got both tyres off the car. 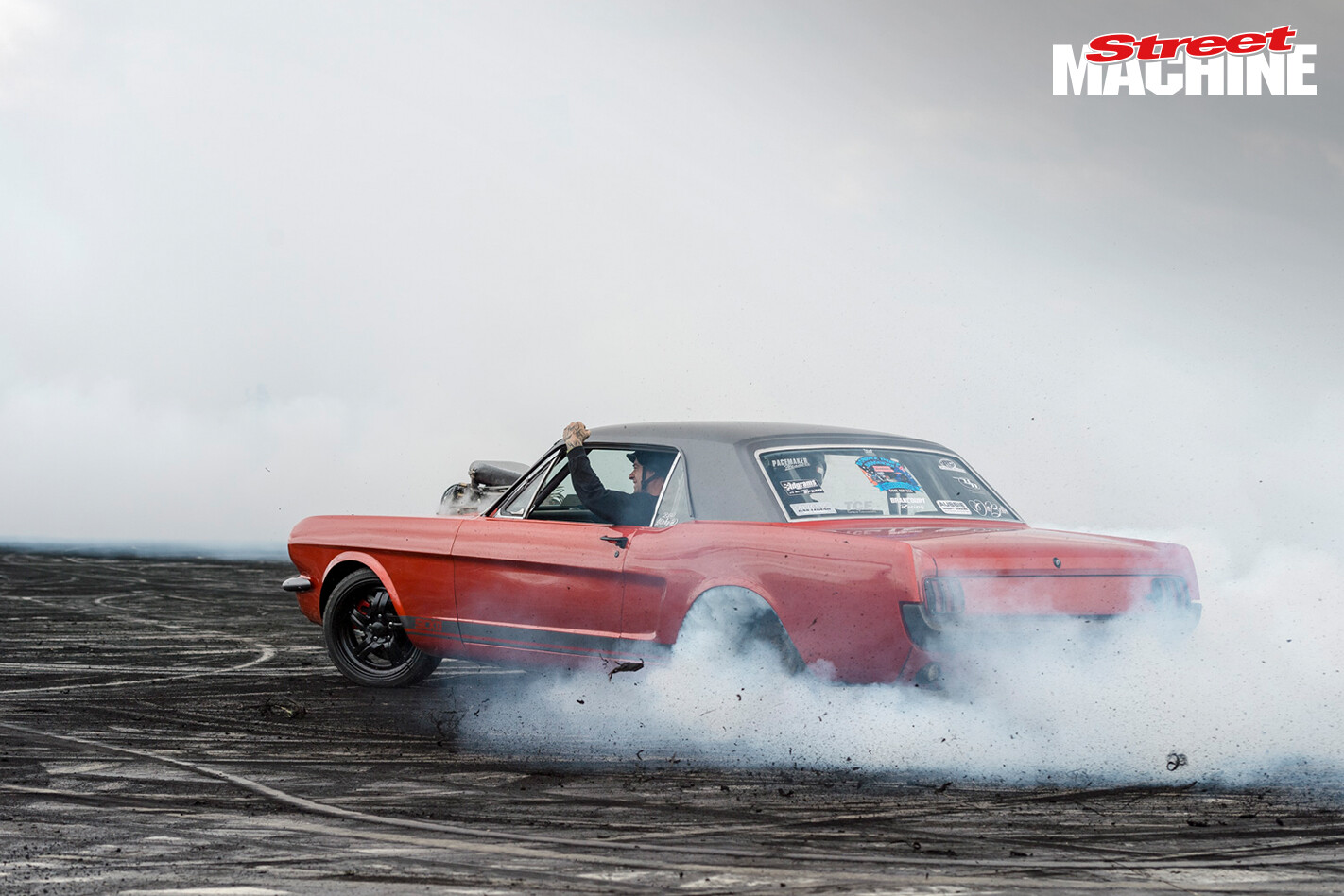 Grmusa didn’t skid on Sunday, after having no brakes and a whole host of other issues with his Falcon, so he jumped in the S1CKO Mustang with young gun Jake Myers. How’s the camaraderie! Alexis Barbeler sure knows how to pedal a car! She tore up the burnout pad in this LS-powered Corolla and made it into the judges’ top 20 burnout competitors for the weekend. 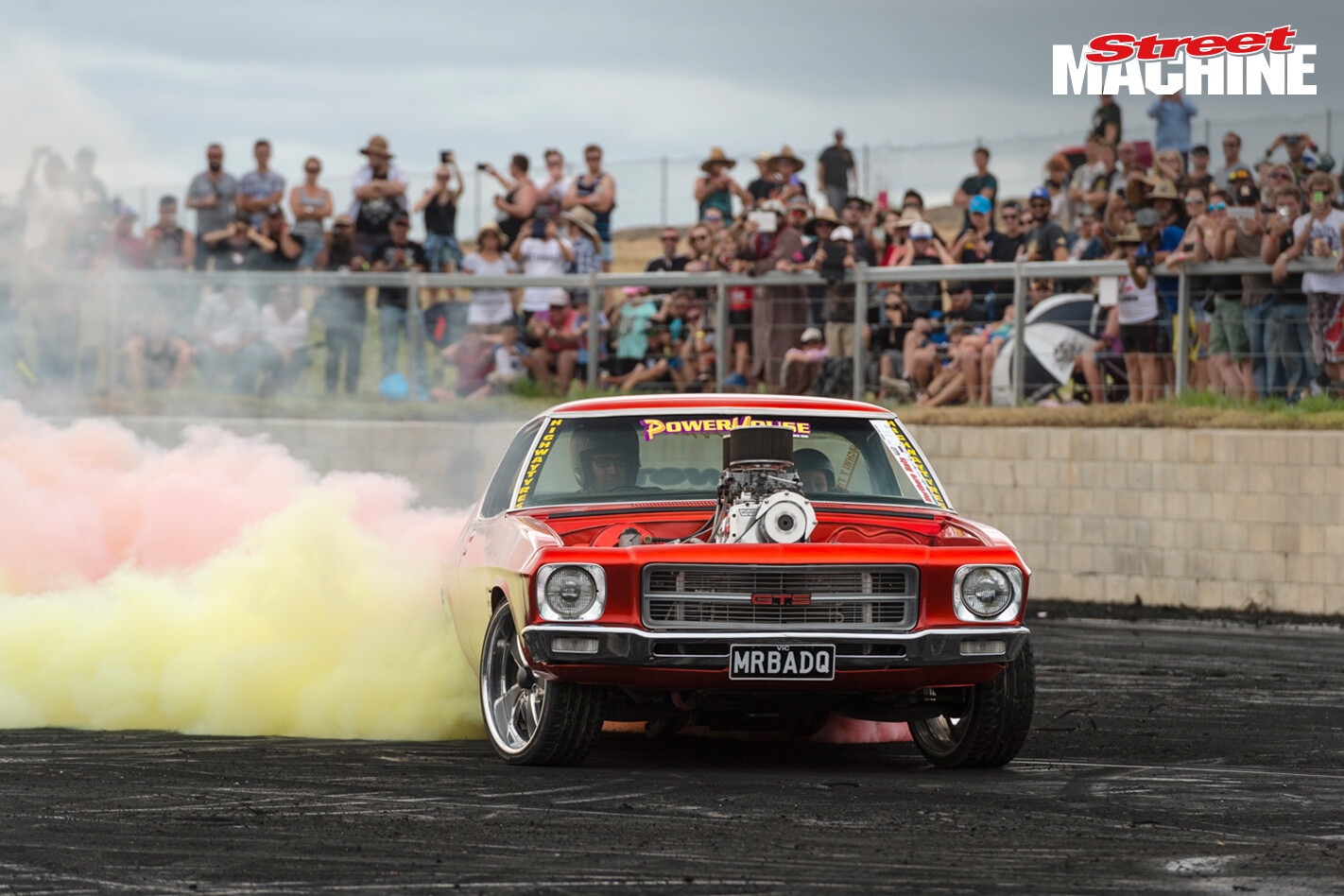 Ross Heasley with his race face on in MRBADQ. Ross is on a roll at the moment, having won Larder Park Motorfest a few weeks earlier, and took the burnouts win at Northern Nats along with $20,000. 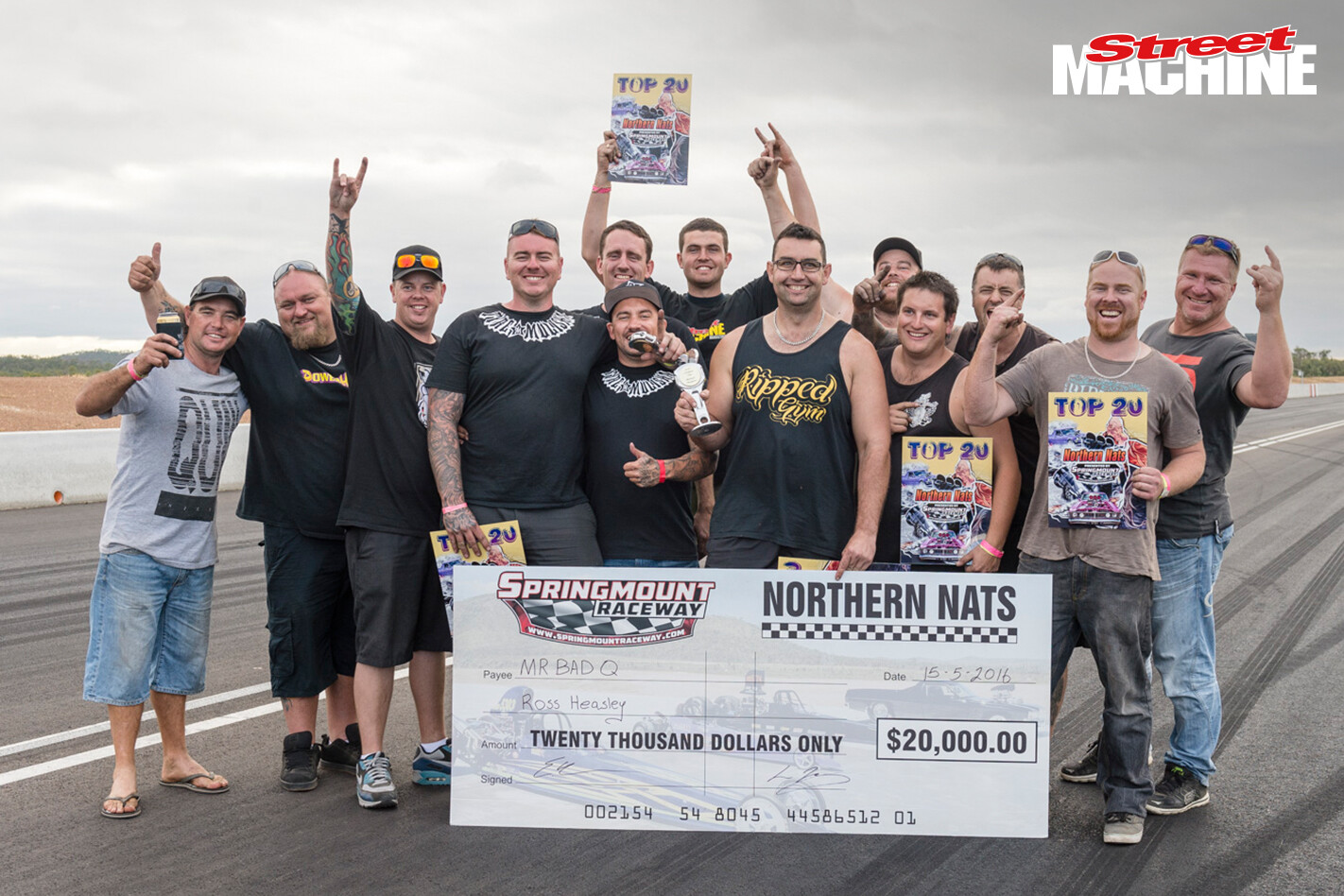