CHANCES are you’ve never heard of Muscle Car Madness; I certainly hadn’t. But to Kiwis on New Zealand’s South Island this is the Holy Grail, the Summernats of the south, the biggest and best car event on the calendar. From 22-24 January thousands of people flock to the small town of Rangiora, about 30 minutes from Christchurch, to admire, cruise and skid cars. We had to see what all the fuss was about, so Editor Telfo stuck myself and photographer Jacobs on a bomber. 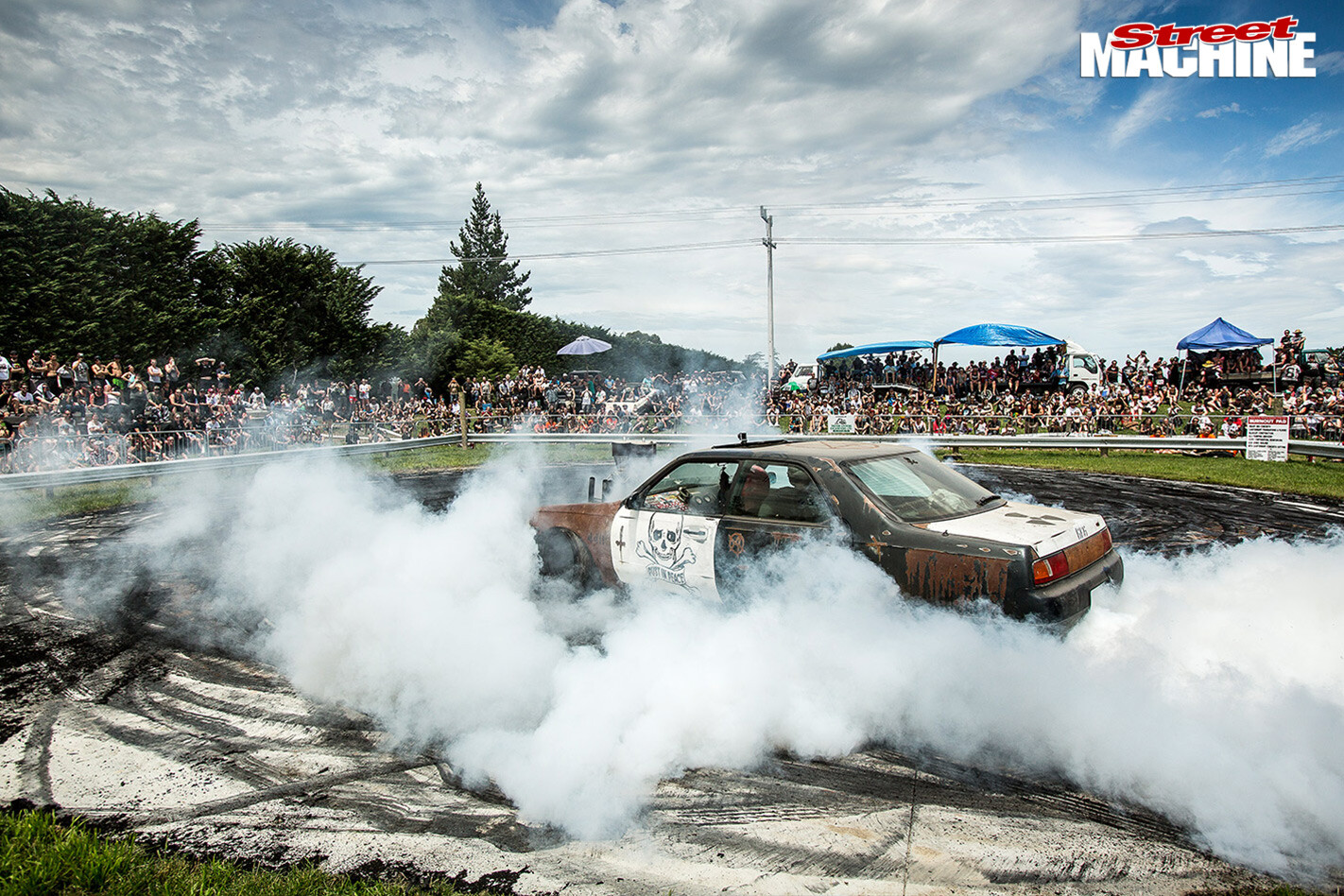 Us foreigners had very little idea of what we were in for; all we had was the town name. The sat-nav took us to Rangiora on the Saturday morning but it couldn’t figure out exactly where the showgrounds were. After circling the town for a while we managed to latch onto the rear bumpers of a few tough-looking cars that led us to Muscle Car Madness. The place was already buzzing. Like Summernats, loads of people camp on-site, so Saturday is the big party day, while Sunday is the hungover pack-up day for most. If we were to do it again we’d go Friday and Saturday, as there’s a big cruise through the town and the gorgeous NZ countryside on Friday that we missed out on this time ’round.

But there was still plenty to see and do at the main show. There were hundreds of cool cars lounging out on the grass, and Jim O’Shea (who comes every year) had a bunch of Old West-style stalls set up where the blokes could get a chop from the barber and the ladies could get rockabilly hair and make-up. What struck snapper Jacobs and I was how different the car culture seems to be in NZ compared to what we’re used to back home. At Summernats, for example, it seems like every second vehicle is a blown Australian muscle car. But here in this foreign land, there are fewer monsters and more cruisers, with American rides outnumbering the Aussie-built entrants by quite a number. There is also a much bigger contingent of traditional-style hot rods, customs and racecars than you’ll see at Summernats. And if you’ve ever wondered why you don’t see jellybean-style mags anymore, that is probably because they’ve all been exported to NZ! We’re told the import laws are way more relaxed in New Zealand; provided the car passes a basic damage report, it can be registered, no ifs or buts. Even brand new left-hook Corvettes and Camaros are completely legal. We got talking to young guy Louie O’Donnell, who recently imported a sweet ’49 Mercury from the States. “Even though the whole body has that rusted patina look to it, they only flagged the car for a small amount of rust damage in the sills,” he explained. “Once I got that fixed, I registered the car!” 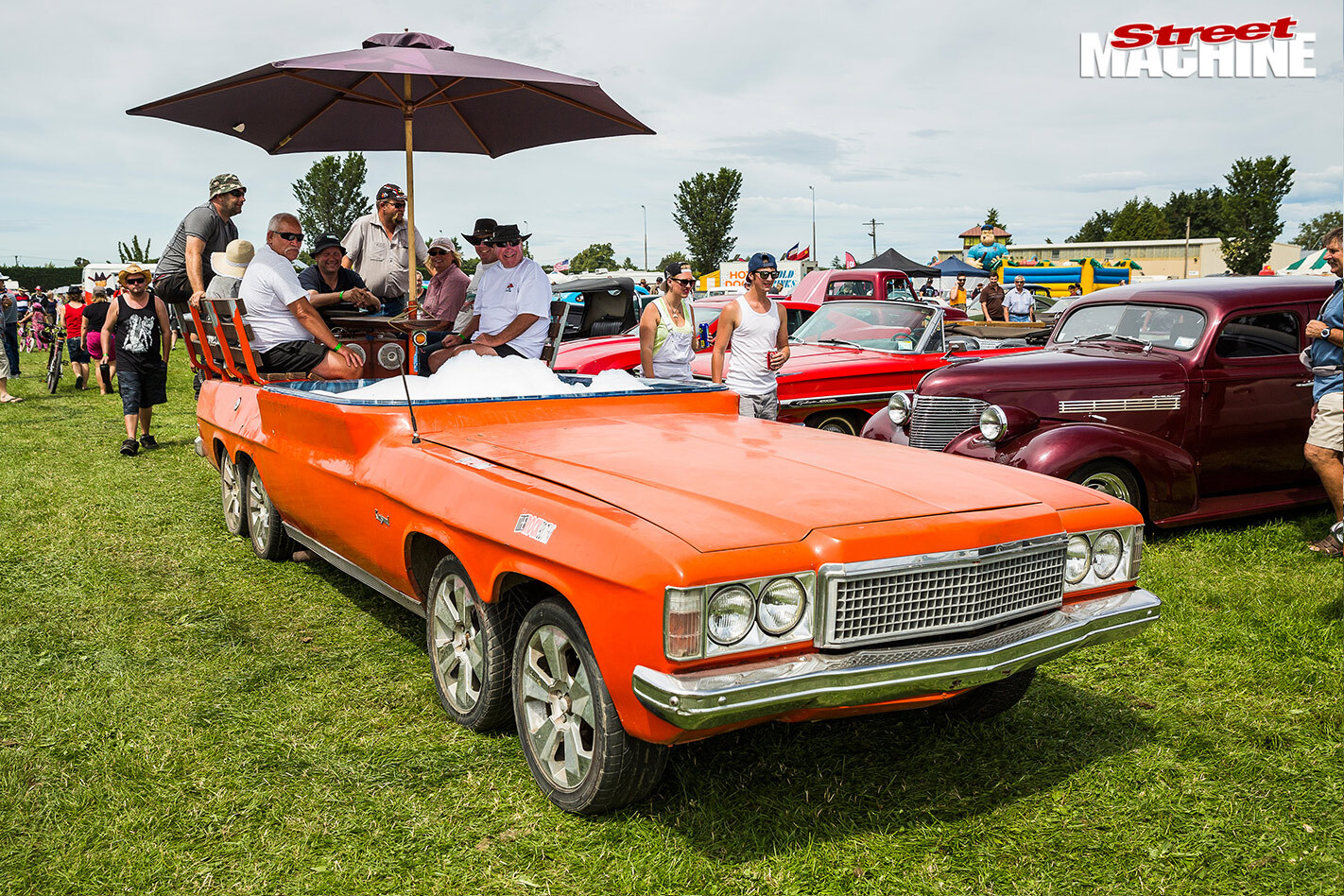 Louie’s mate Jamie Burrows has a ’64 Impala sedan with a tunnel-rammed 350 Chev towering out of the bonnet, which he reckons can be driven on the street without attracting the heat. Next they’ll try and tell us the eight-wheel HZ Holden spa car they had roaming around the event is all good to hit the street.

Around 1pm the burnout comp kicked off, so we headed to the pad. By this time the temperature was way hotter than we ever thought possible in New Zealand, but despite the heatwave the crowd was massive. The first car to hit the pad was Lindsay Smith’s 454-cube big-block LX Torana hatch, which mainly sees drag strip use. “I’m yet to run the nitrous because I still need to get my licence for it, but I’m running 11s aspirated and it should go 10s with the nitrous switched on,” said Lindsay. The Torana did one of the best skids of the day, sending smoke everywhere. After that there was an onslaught of later-model Commodores and Falcons, with a sprinkling of old-school toughies in between. A couple of mates from Christchurch were burning rubber in a pair of Nissan ratters. One was a Laurel sedan with a 440-cube Mopar and the other was Callum McKay’s R31 Skyline with a twin-turbo 305-cube Chev motor. Unfortunately the Skyline was having boost issues, as it was only finished the Wednesday before the event and needed to be tuned properly. But the Mopar-powered weapon went mental, and the crowd loved it.

It was also cool to see some turbo Japanese stuff on the pad that would be a rare sight back in Australia, especially the big-boost RB-powered Nissans, which sounded insane popping off the limiter. Even though Muscle Car Madness lacked the big-dollar skid rigs we’re used to, the crowd and competitors made up for it with their enthusiasm. Every time a radiator spewed its guts or a car hit the wall or just did an awesome skid, the few-hundred-strong car nuts surrounding the pad erupted. It was a great grassroots-style atmosphere, with plenty of young guys keen for a shot. One girl even rocked up in an old Toyota van and promised us “the best burnout we’ve ever seen” – we admired her keenness. On more than one occasion we were asked “how do they make the burnout cars catch fire back in Australia”, so it is probably time we shipped a few of the front-runners across the pond to show our cousins how it is done. As the sun set things got progressively rowdier, but compared to Summernats this was a walk in the park. Despite the premise of ‘madness’, everything was pretty relaxed and family-friendly. We jumped in the back of Shaun Martin’s HQ ute, which did a strong burnout earlier in the day, and did some cruising with the rest of the cool cars, whacko motorised Eskys (or chilly-bins, as they’re called over there) and crazy mini bikes. New Zealand is similar in so many ways to Australia. Their flag is almost identical to ours, they drive the same commuter cars and they’ve got Woolies supermarkets (though weirdly renamed ‘Countdown’, and the self-serve robot speaks with a Kiwi accent), yet what we found at Muscle Car Madness was totally unique. No drongos, no politics, no dramas; just a bunch of genuine enthusiasts enjoying a weekend away. Simple as that. 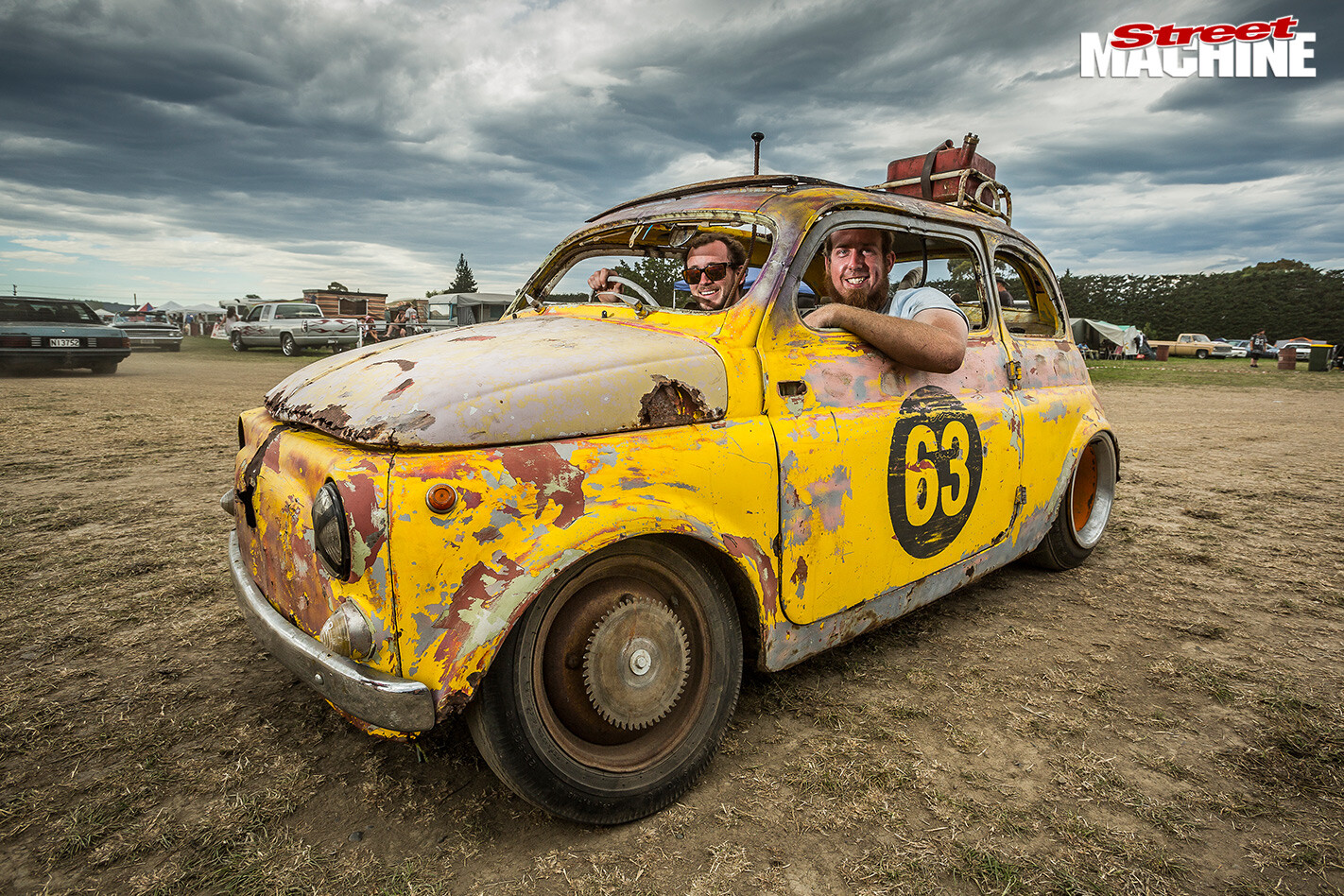 Hogan Jeffs’s Fiat ratter was a real head-turner! With some pretty shonky bodywork, massive camber on all four wheels and a 250cc Honda motorbike engine sitting in the cabin, it received the thumbs-up everywhere it went John Popenhagen has owned this ’31 five-window coupe for five years and has been coming to Muscle Car Madness for just as long. She’s powered by a 1953 Chrysler 331-cube Hemi V8 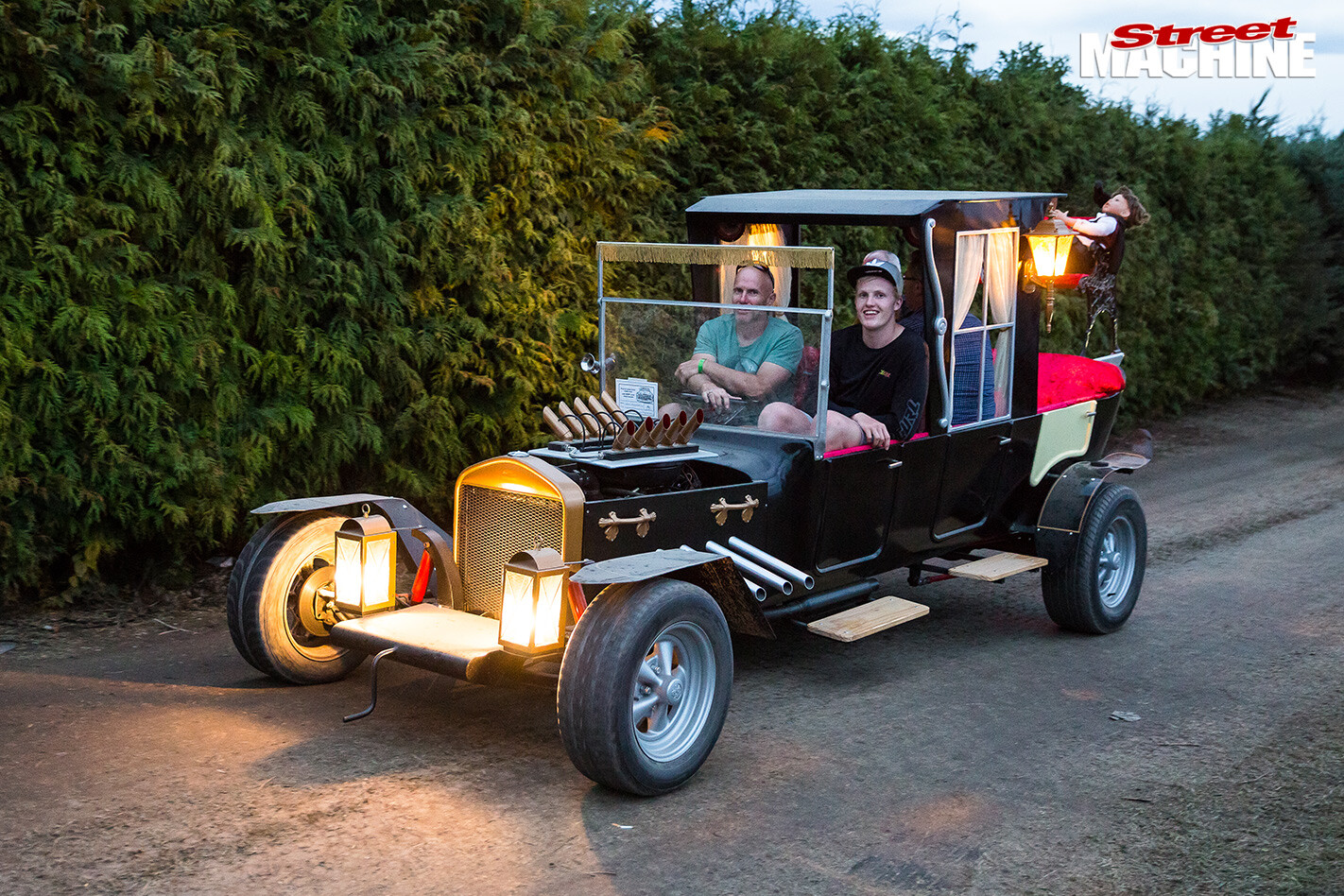 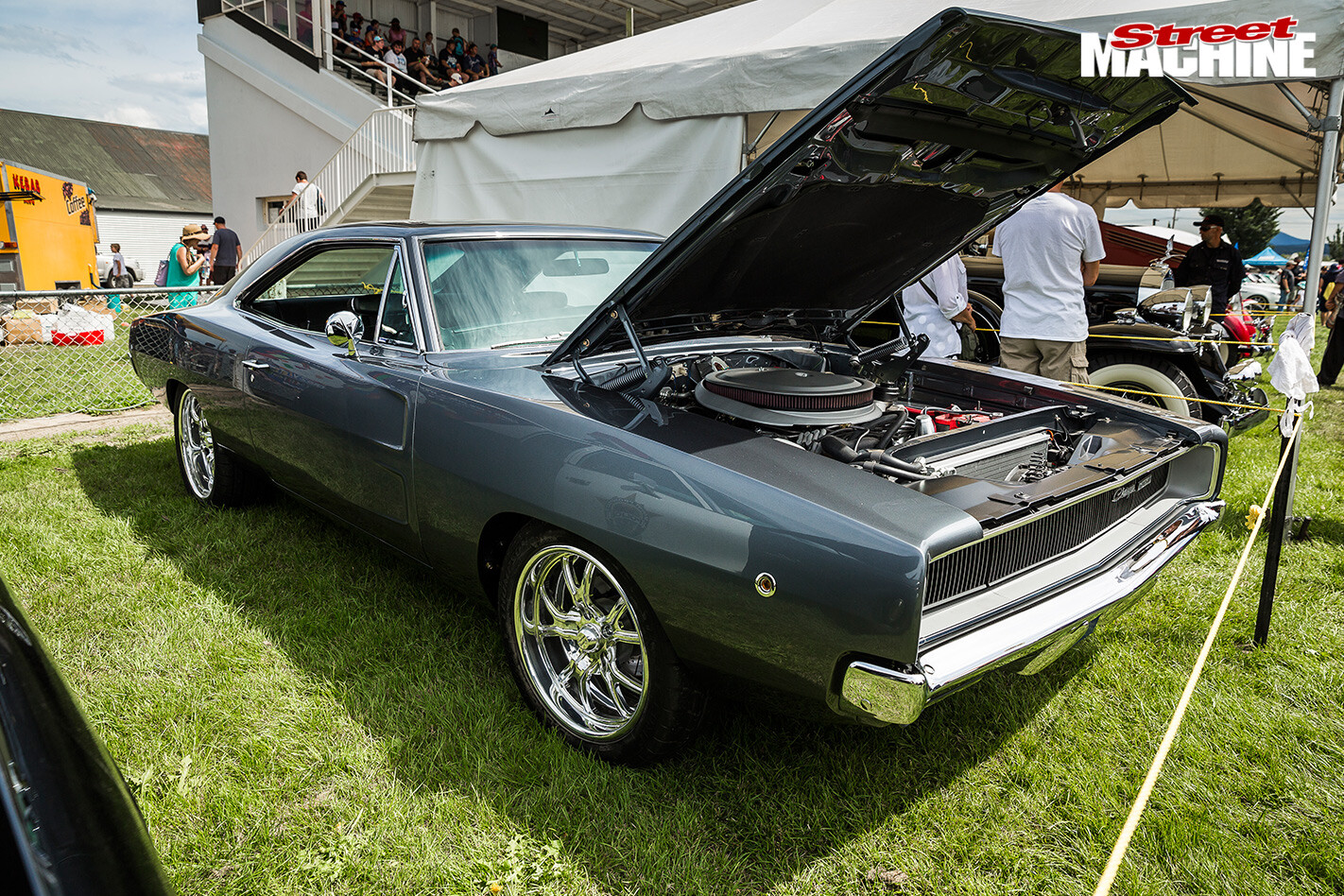 Chris Blackmore’s ’68 Dodge Charger was finished just in time for Muscle Car Madness after a massive four-year build. Chris started with a rolling shell and has slowly turned this Charger into a stunning street car. Under the bonnet is a 472-cube big-block Hemi, which is hooked up to a Hemi-spec Torqueflite gearbox and Dana rear end. The car has had extensive body modifications to make all the panels fit nicely, plus a heap of structural work to bring it up to modern standards. The suspension is standard but rebuilt with new parts, while inside Chris has made a stunning custom CNC-machined billet dashboard and had new seats fitted 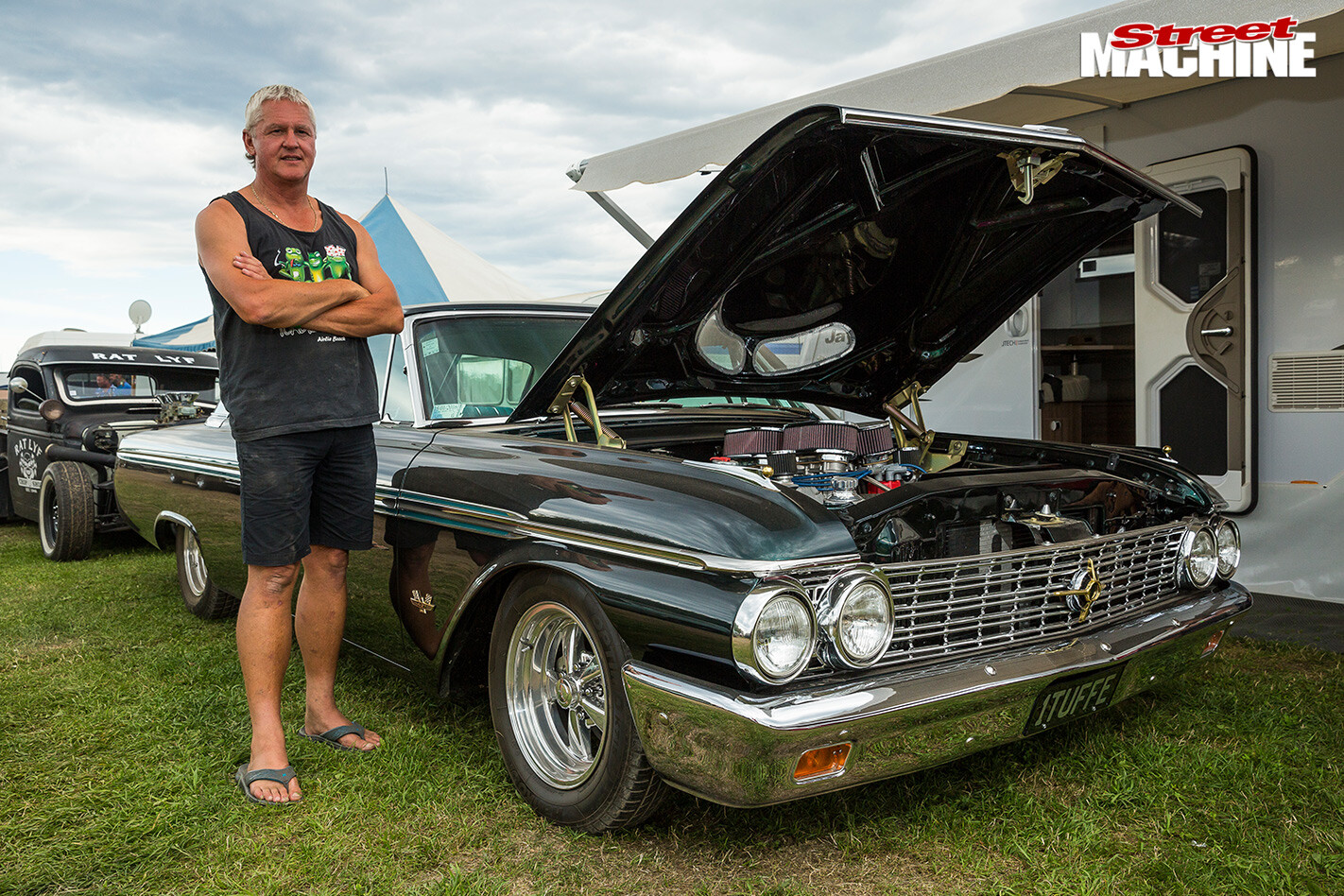 Paul Williams’s ’62 Ford Galaxie 500 XL is something seriously special. Under the bonnet is a genuine Holman-Moody Le Mans-spec 427-cube race engine originally built for the Ford GT40 racecars that dominated Le Mans in the 60s. “It has won a few awards over the years but I always built it to drive; we take it to plenty of events around NZ,” Paul said. “Next on the bucket list is Summernats, but I’m building something Australian to bring to that!” Kim Mitchell’s ’68 Camaro landed in New Zealand from the USA in 2006 as a red six-cylinder car. “To be honest, I was pretty disappointed with what I ended up with, so I stripped it down and did a full rebuild,” Kim explained. The six-pot went in the bin, replaced by a 500hp Chevrolet 383-cuber. Kim’s son Matthew, a spray painter by trade, covered the car from top to bottom in Holden Atomic Mica green, and it’s detailed beautifully underneath A good car show wouldn't be complete without some weird motorised furniture, and one of the best examples of that was Tim Youngman's buggy. "I had the Work Equip wheels lying around after taking them off my Corolla, and I had the table sitting in the shed, so I thought I'd try and make something out of them," Tim said. "I just worked on it after work and on weekends with some mates for about three months. It turned out pretty good!" 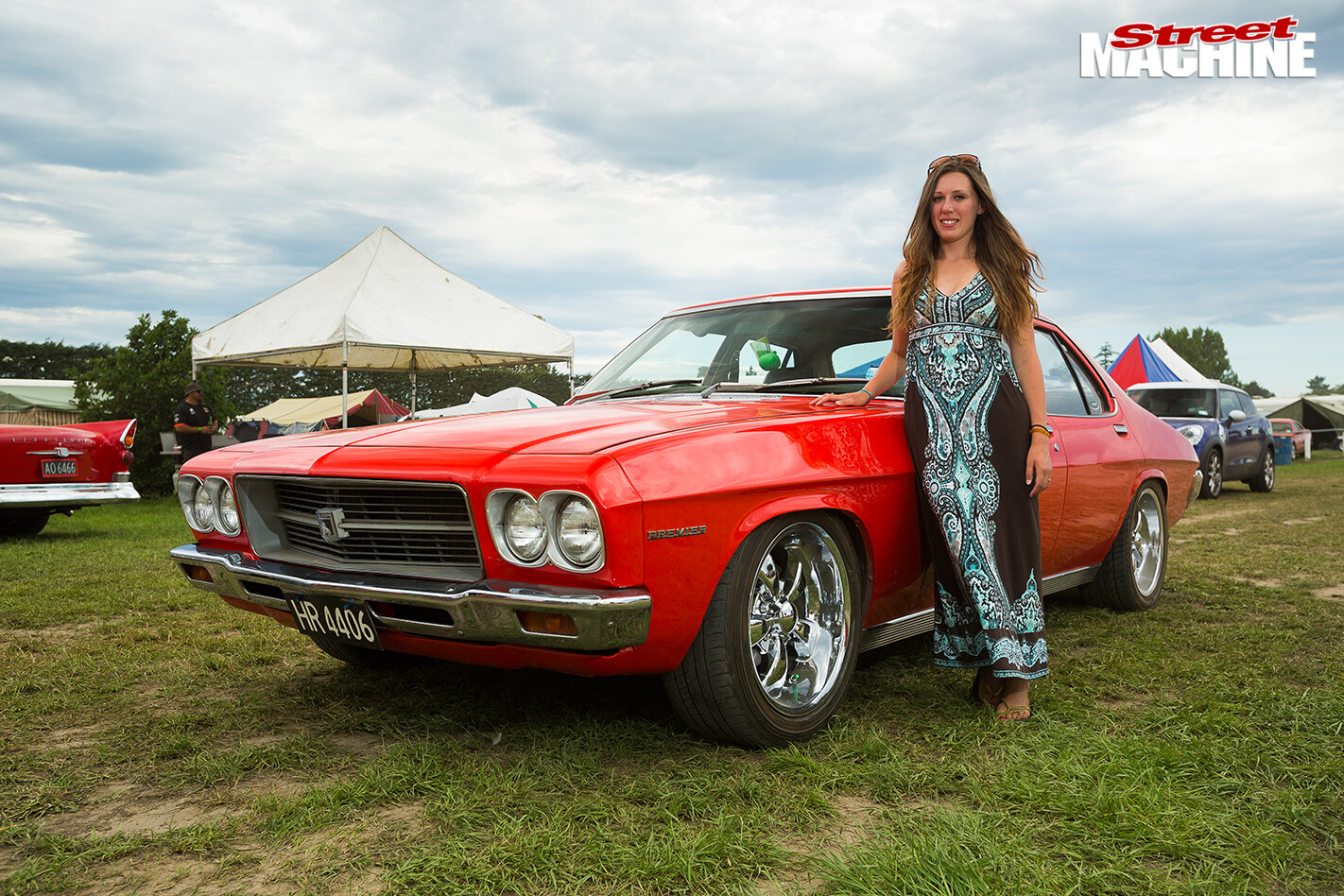 21-year-old Jessica McCormick's HQ Holden was a rolling shell when she got it seven years ago. Since then she has taken the body back to bare metal and sprayed it bright red and the Holden 202 six has been given a tickle-up as well. Jessica loves taking the HQ to car evnts around NZ, like Muscle Car Madness and Kiwinats, with her family Greg Lewis's junior Jimmy altered was built in the early 60s by the boys from New Zealand Hot Rod magazine. Greg has had the car for 10 years and did a full rebuild about a year ago, and enjoys getting stuck into the dirt drags This is 23-year-old Dylan Orpwood's 1933 Willys coupe gasser. Dylan is an apprentice mechanic and built the whole thing with his hands. "I started working on cars when I was 14 with my brothers and the old man," he said. "Ibuilt a gasser because it was the 60s hot rod style that appealed to me the most. In my opinion these were the original hot rods, so that's what I went with!"