THREE days of powerskids, drag racing, burnouts and cruising the track at Victoria’s Winton Raceway: that’s Performance Car Mania in a nutshell. Here are some of our favourite cars from PCM 12. 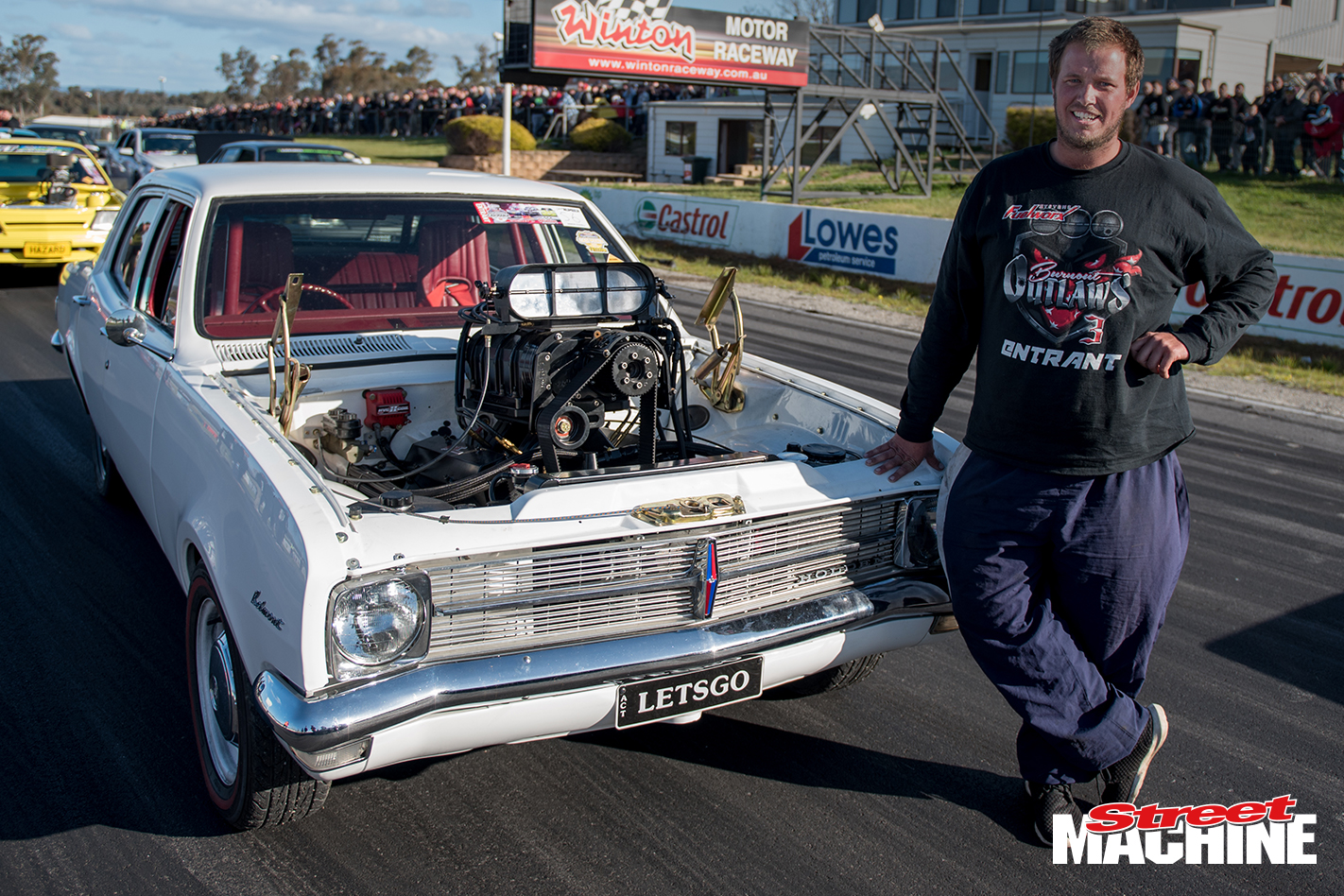 One of the toughest cars to hit the track was Joel Sykes’s blown, injected 406ci SBC-powered HK Belmont. “I came down for a look a couple of years ago, but this is my first time with a car at PCM,” the Canberra resident said. 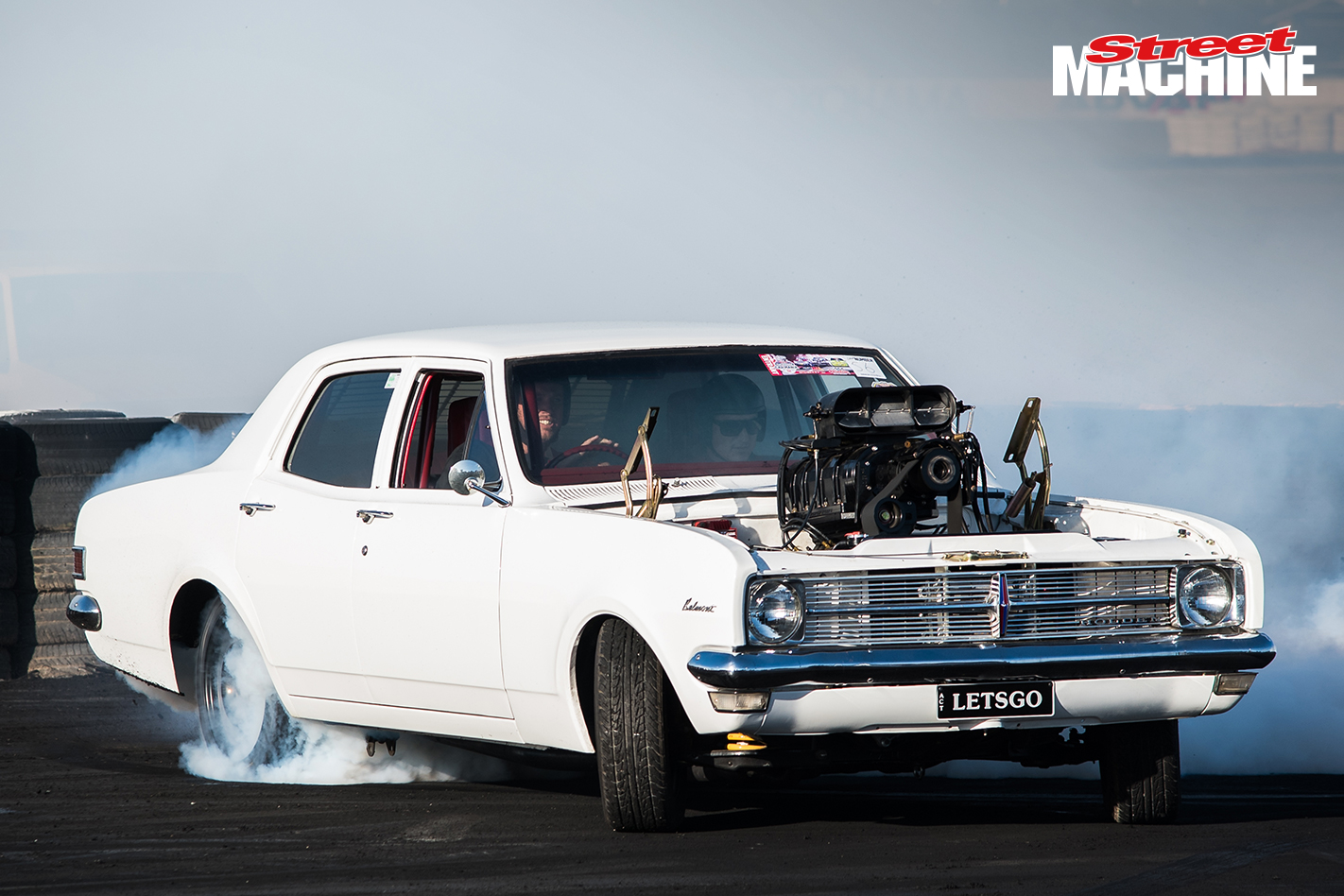 “The HK is actually an ex-drag car and it even still has the wheelie bar mounts under the back. The car used to run 9.40s down the quarter with an aspo engine, but I’ve decided to have a go at the skids as that’s where all the action is these days. ProFlo Performance built me the blown and injected combo. It’s backed by a full-manual Turbo 400 and nine-inch rear end.” 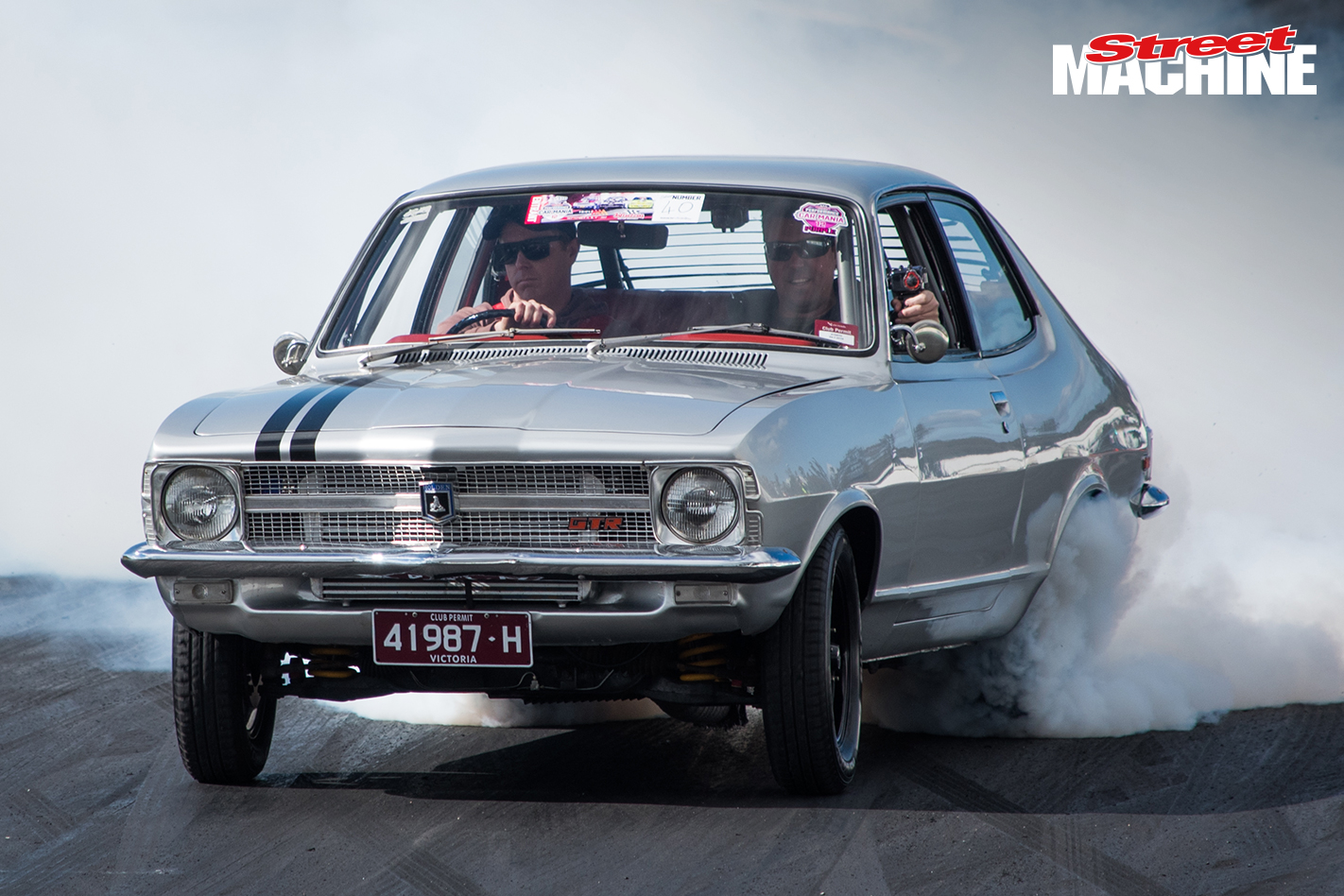 Luke Hamilton from Pakenham bought his LC Torana as an unfinished project about six years ago. “A mate found it for me,” he said. “It was already painted and had the red original-style interior and rollcage. The mini-tubs were in and it had the motor fitted, but was needing assembly and finishing off. 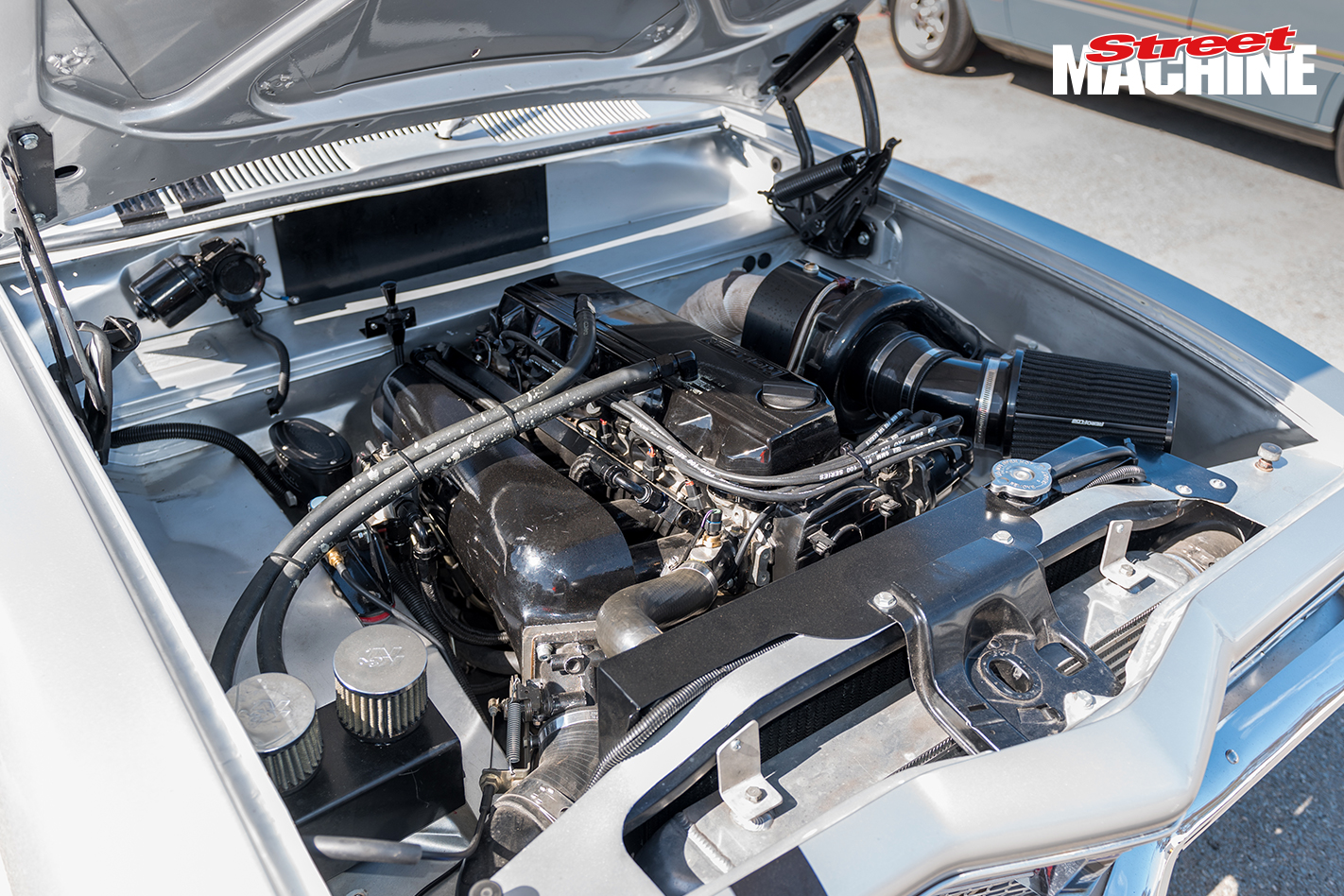 The motor is a JPC-built turbo RB30. It’s running a 42mm Garrett turbo, and at 30psi boost it’s making 405rwkW on E85. It was tuned by D’Annello Performance in Hallam. The gearbox is a Powerglide, and it has a BorgWarner rear end. PCM has been fun; I did some cruising with a bit of powerskidding and drove it back on the trailer, which is always a good thing. I’m hopefully off to race it in the next few weeks, looking for low nines, and I’m going to drive it to and from the track.” 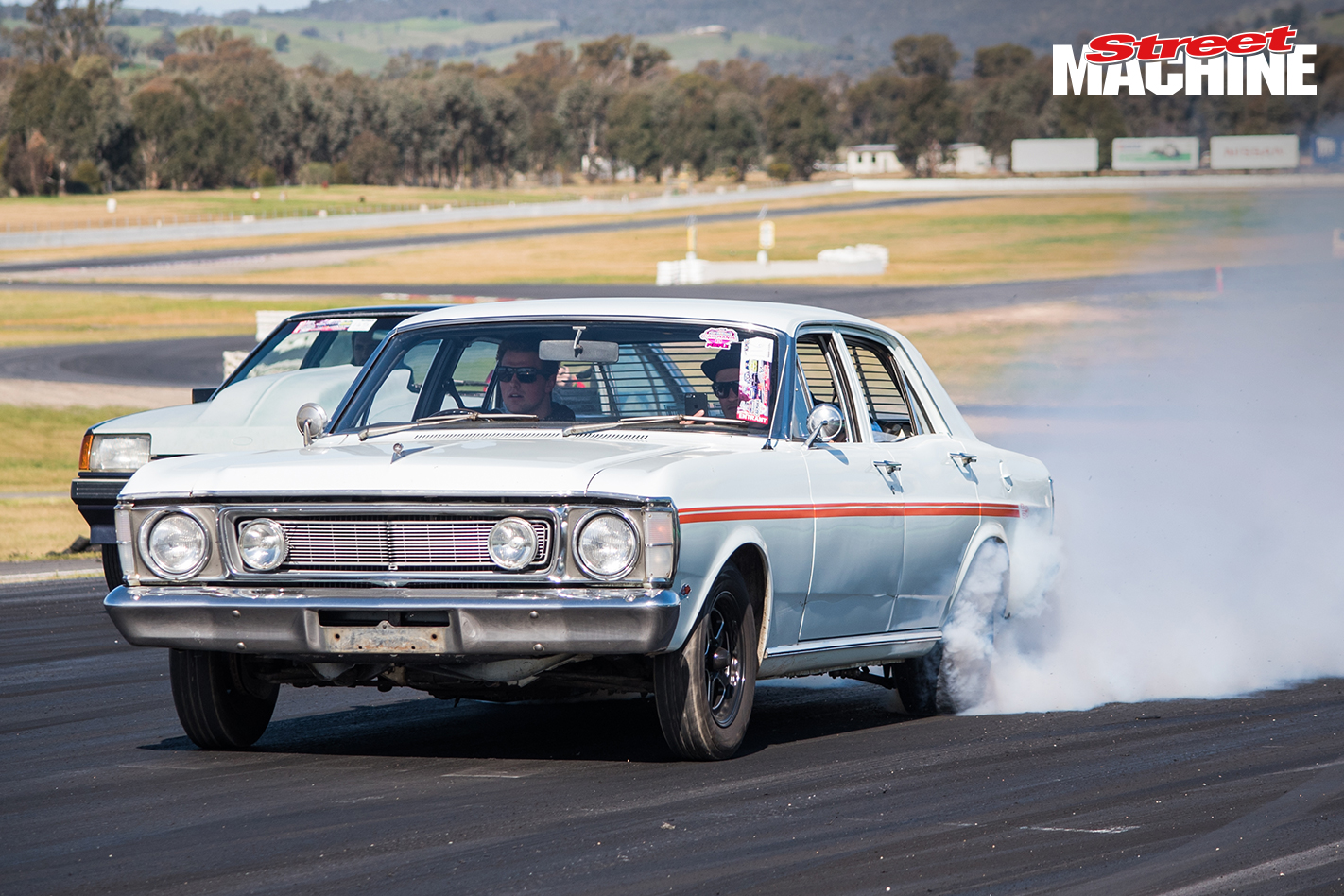 Joshua Tuskin’s XW may look sedate, but under that smooth exterior is a wheellifting 9.49@149mph quarter-mile animal. The 24-year-old has had the Falcon since he was 16, and has transformed it into one cool sleeper. 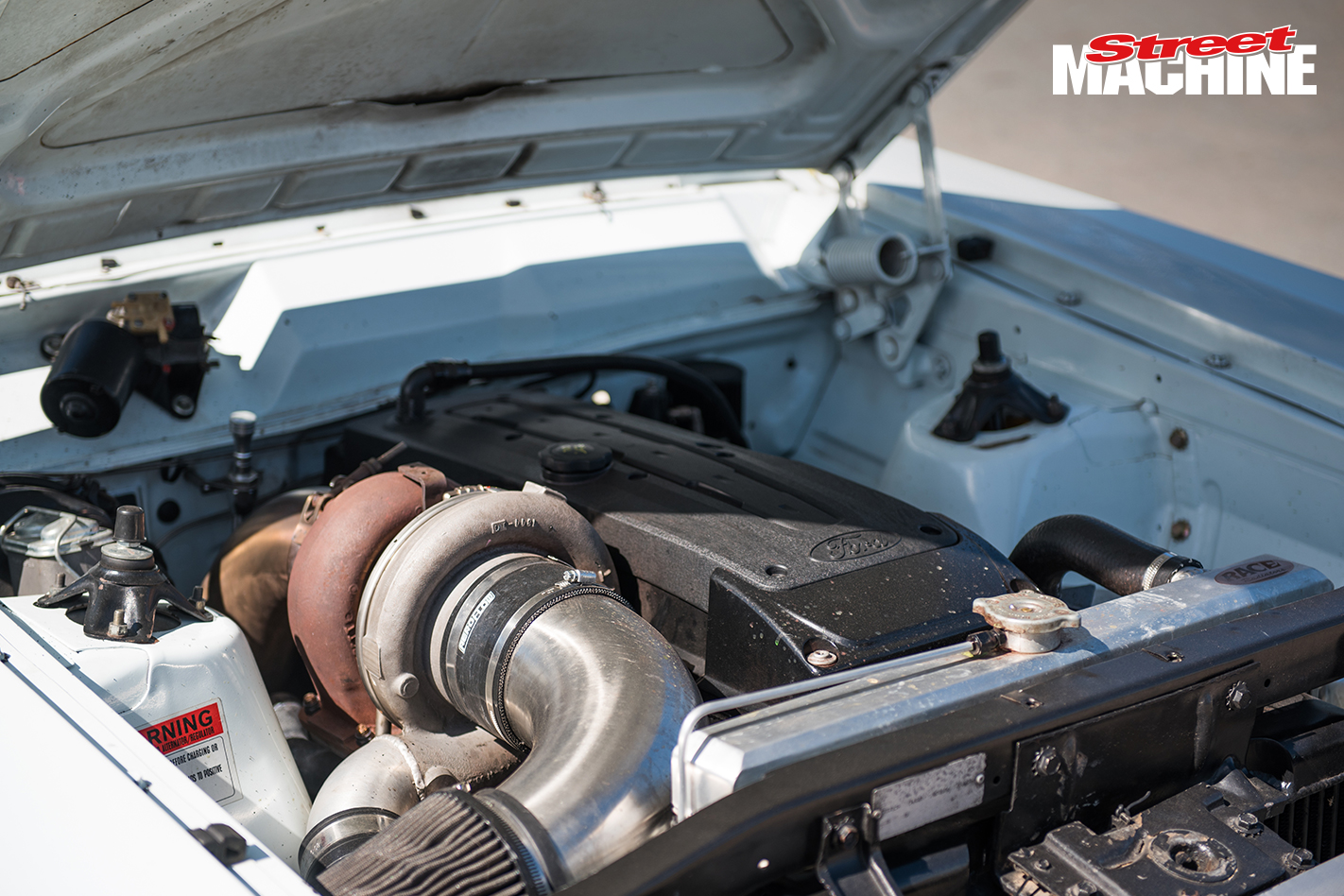 “The engine’s basically a stock Barra running on E85. It’s fitted with better valve springs, head studs, oil pump gears – just the usual stuff,” he said. “The turbo is a Garrett GT42 and the engine management system is a Haltech PS2000. I had Paul Rogers build the Powerglide and the rear end is a Truetrac nine-inch with 3:25 gears.” Inside, the XW has been treated to a full period-correct re-trim. 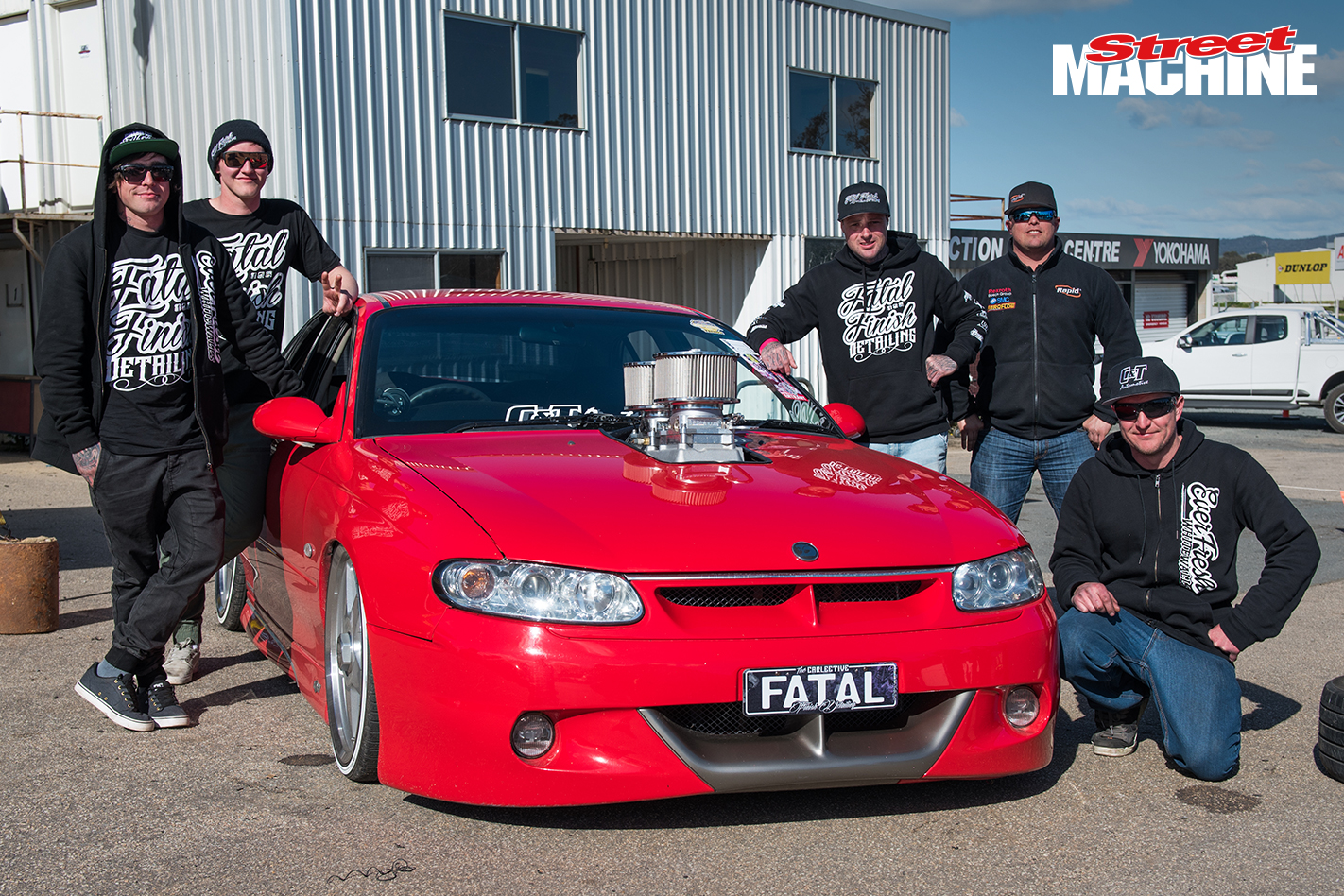 Jamie Allen, owner of Fatal Finish Detailing in Wodonga, is known for his high-end work on prestige and show cars, and his immaculately presented VT ClubSport is a rolling showcase of his skills. The suspension is fully airbagged, giving the car a killer stance, it rolls on Momo wheels, and the interior has been completely re-trimmed. 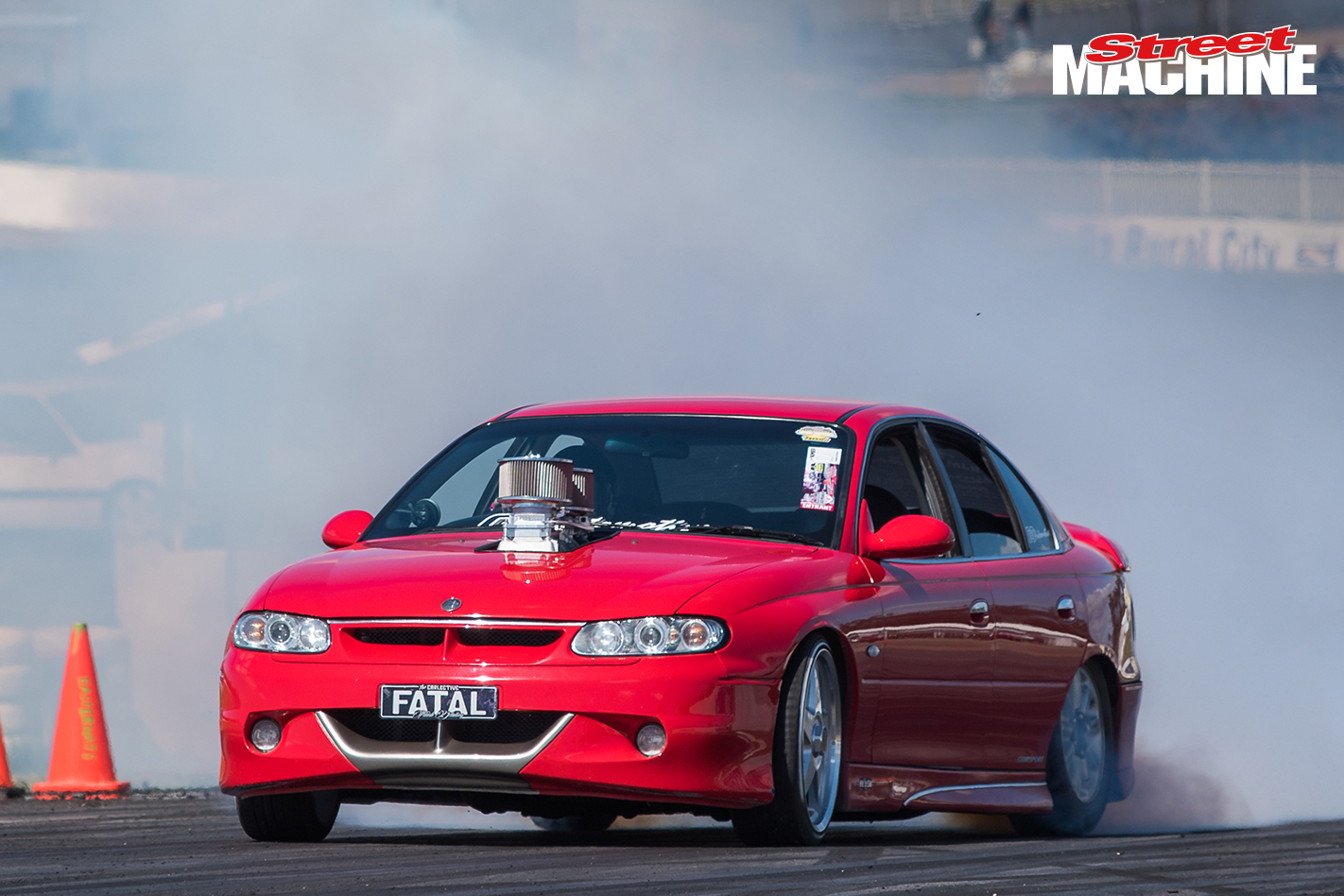 The VT is not all show though, and copped an absolute hiding all weekend. It’s powered by a tunnel-rammed and cammed LS3 topped with a pair of Aeroflow throttlebodies, but Jamie said he is “going blown next year”. Backing up the LS3 is a Turbo 400 and mini-spooled IRS rear end. 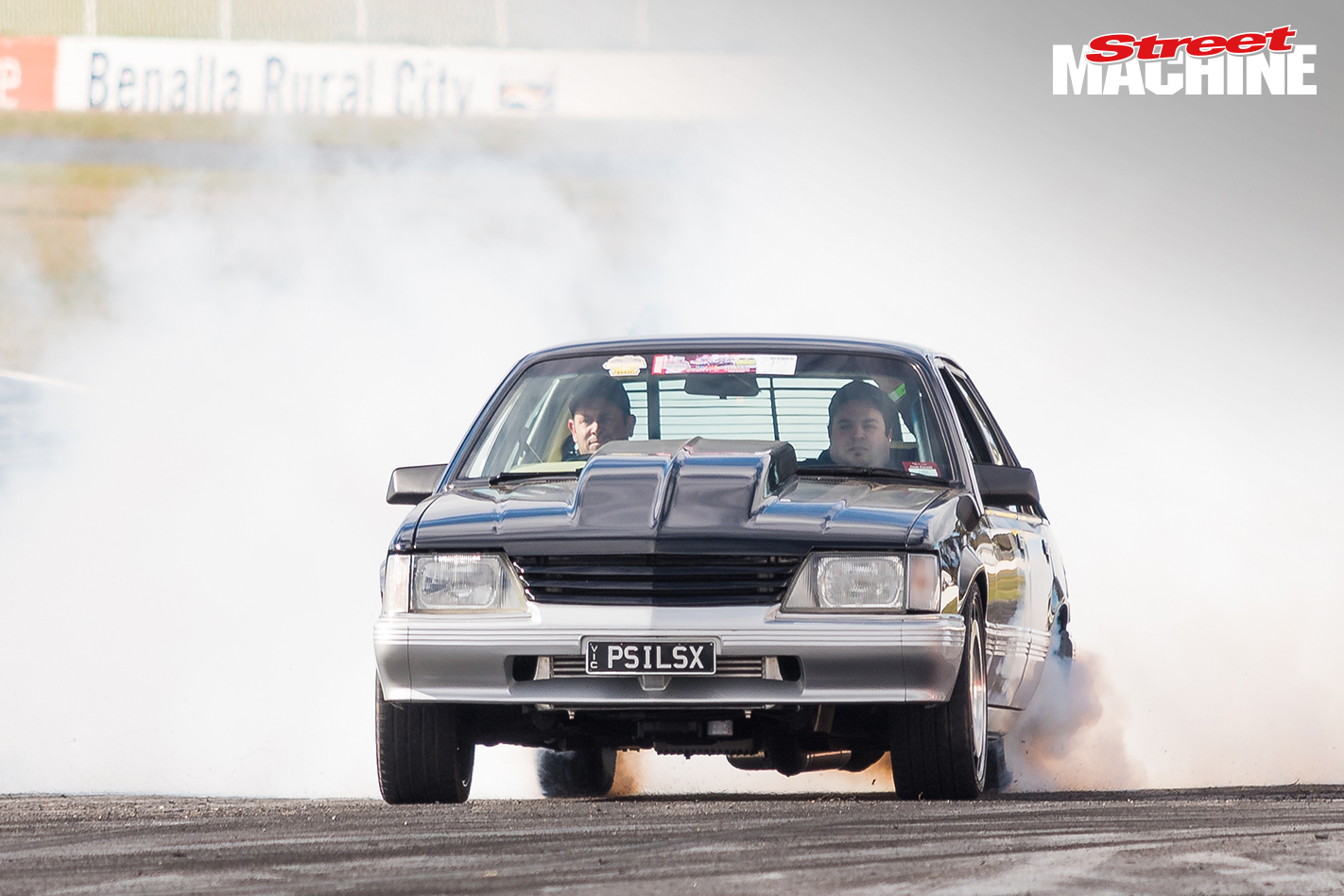 Scott McCafferty’s VK Commodore is putting out 612rwkW from a Powerhouse Engines-built 388ci LSX. “The car has just had a three-year rebuild. We finished it just in time for my mate Matt Smoors’s wedding a few weeks ago,” Scott said. 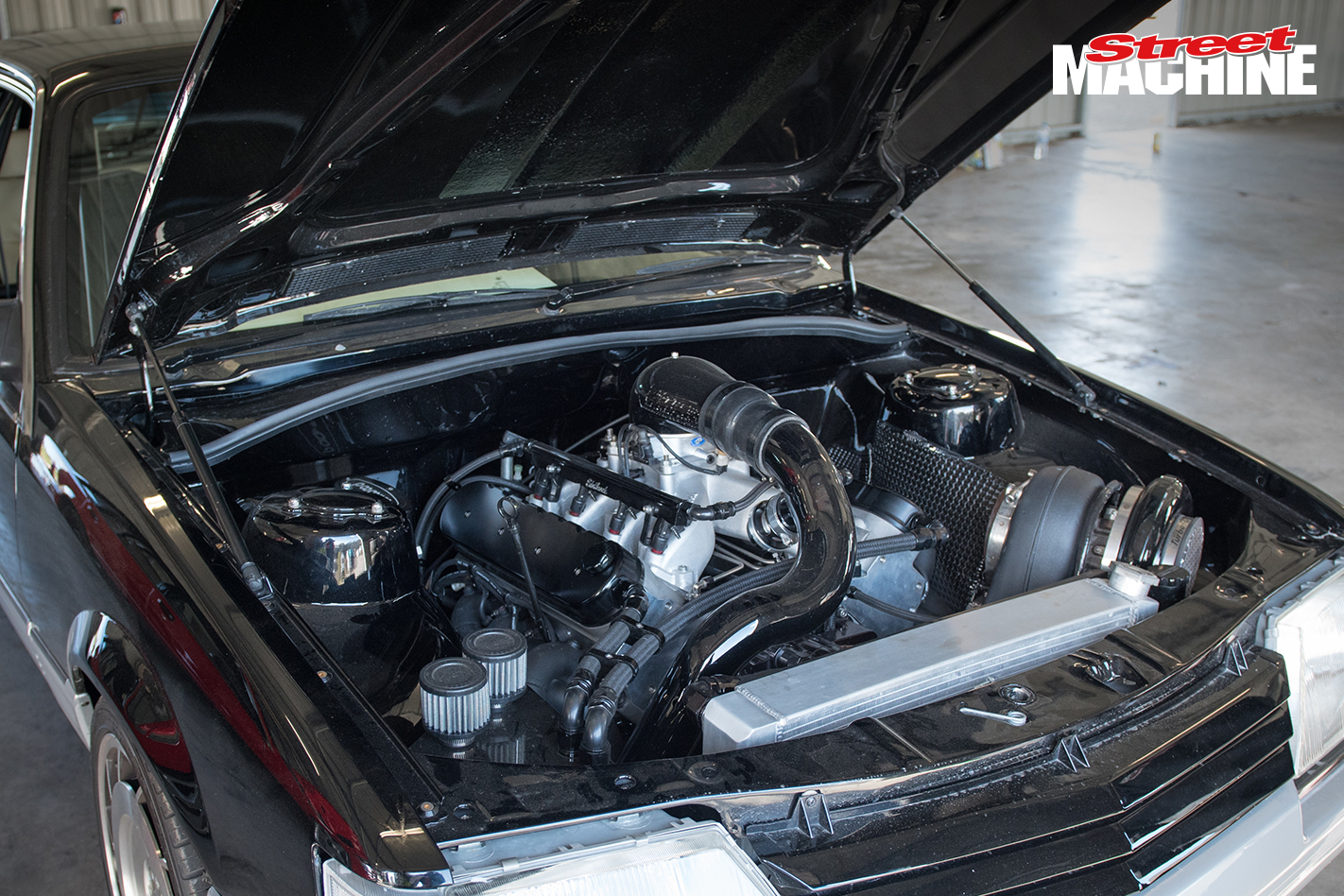 “The BorgWarner 84/94 turbo was built by Forced Inductions in the USA. I’m running a Haltech engine management system tuned by Frank from Allsparks.” 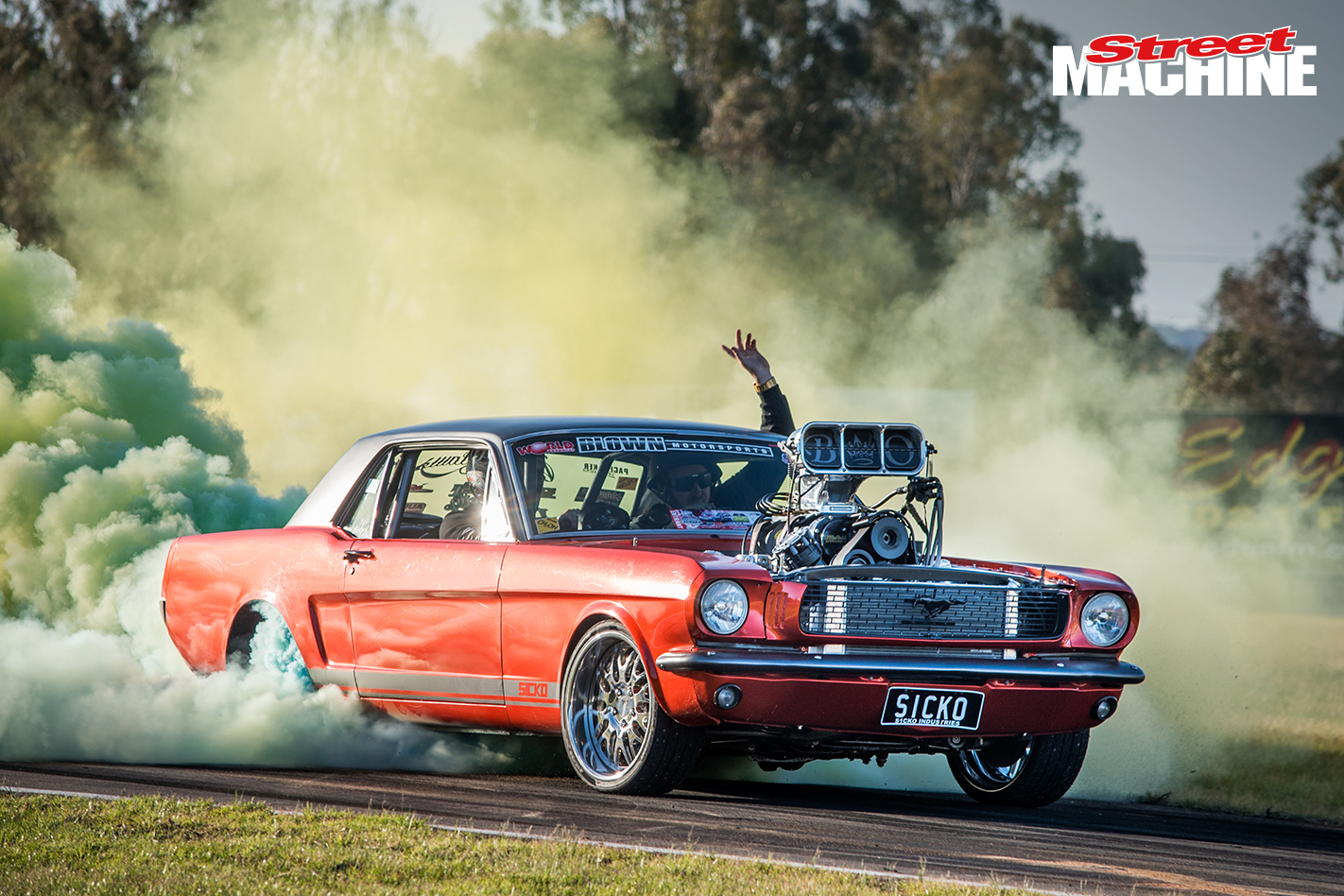 Making their PCM debut, burnout legends Gary and Jake Myers put on a strong show for the crowds throughout the weekend. Jake came out on top in the burnout competition with his S1CKO Mustang, and took second place in the powerskids. In addition, he punished his ride all weekend in the cruise sessions. 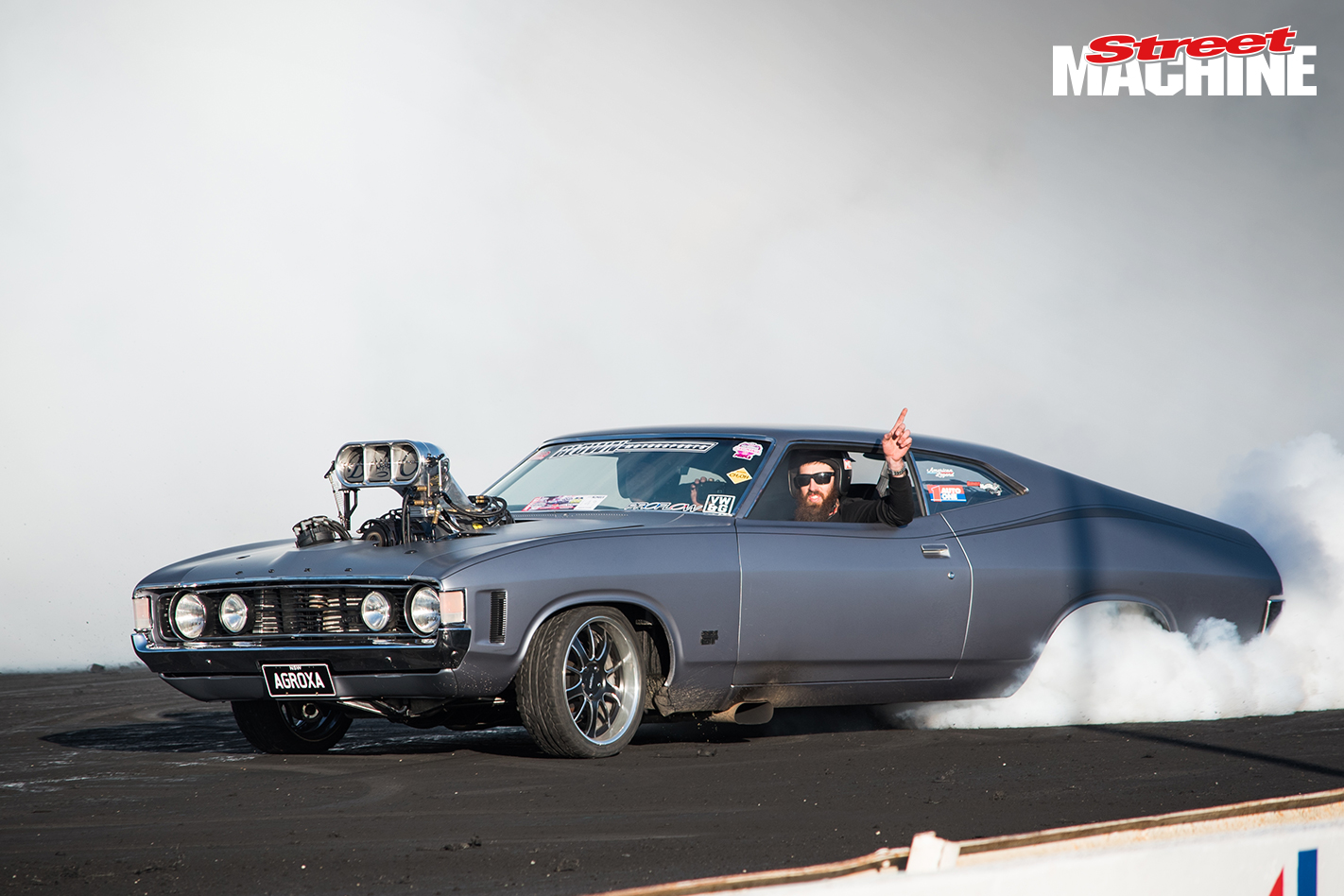 Gary’s new AGROXA Falcon was one of the top qualifiers in the burnout comp, but he missed the finals after cracking a cylinder head in the powerskids. 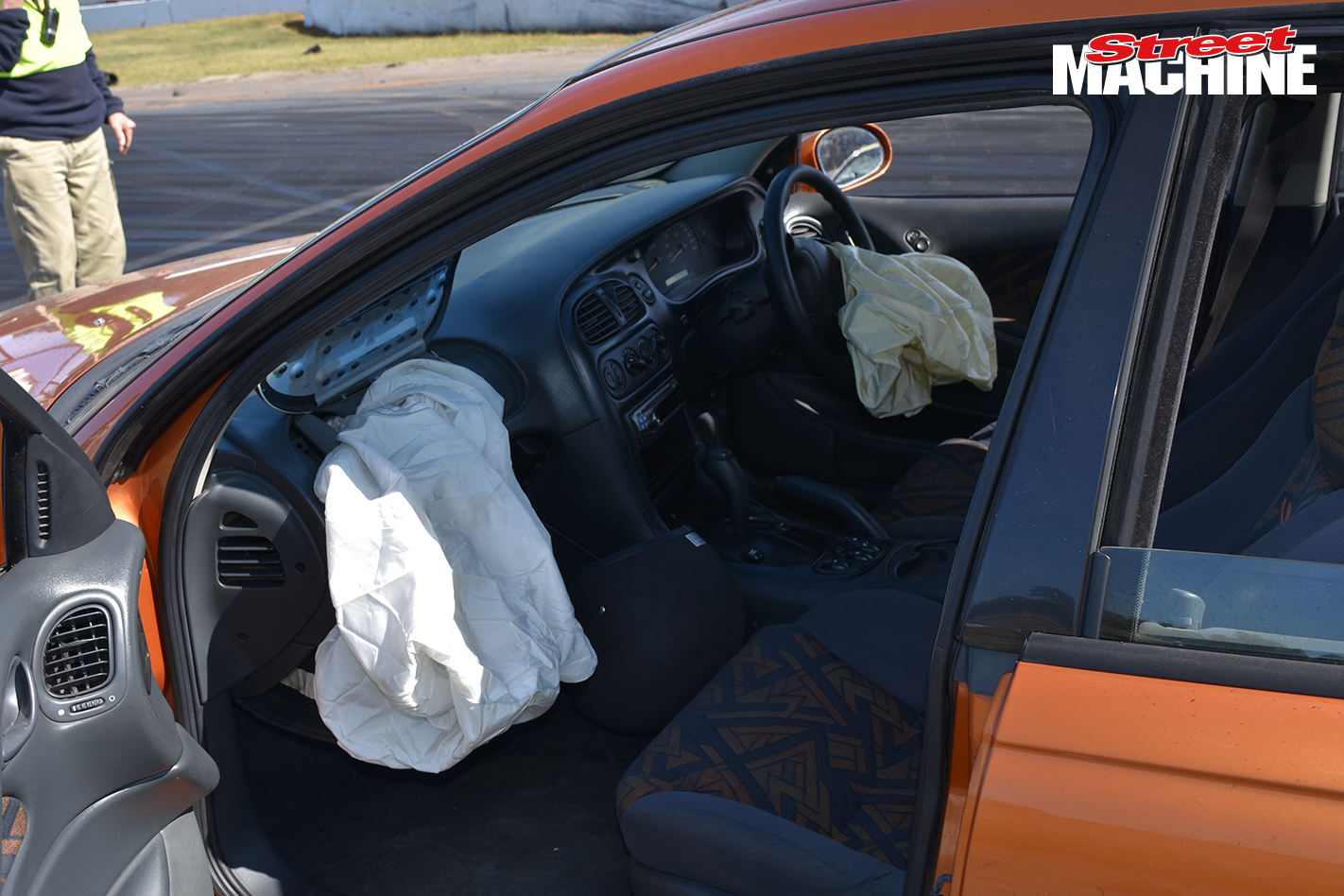 Sunday’s burnout finals went off with a different sort of bang for Jake Harris and his unsuspecting passenger in his VT SS. When Jake launched into top gear as he hit the pad, both the front airbags were triggered. Jake ended up with a Holden logo impression in his arm from the steering wheel badge, but other than that both driver and passenger fortunately escaped unharmed, and Jake managed to finish the skid.