THANKS to a ton of hard work by the crew at Benaraby Raceway and the Australian Pro Street Association – and a pinch of good luck – the fourth round of the APSA national series turned out to be a real winner despite some early rain that threatened to cancel the event.

It’s a testament to the crew at Benaraby raceway that they turned a potential washout into a real corker of a drag meeting. Once the racing started at 3.30pm it just didn’t stop until the last pass at around 10.30.

Benaraby is a great little facility and it was neat to see some very cool local cars mixing it up with a strong contingent of travellers from down south. We have to say, we’ve never seen such a high proportion of fast Fords at a race meeting for a long time!

That didn’t mean they dominated the results, however. And while Benaraby is a full quarter-mile track, the APSA classes ran over the eighth mile due to the crazy top end speeds some of these cars are now producing. The DYO guys and girls elected to run the full quarter.

Outlaw Radial was one of the premier classes of the meeting with a bunch of heavy hitters getting involved, including Steve Bezzina in his twin turbo XW, Perry Bullivant in his nitrous-assisted LX hatch, Scott Cortina’s HG Holden and Dominic Luppino in his stunning Mustang, who defeated Bullivant in the final for class win.

It was the battle of the blowers in Pro Street Blown and Craig Hewitt (above) took home gold with the blown Hemi-powered Monaro cranking out consistent high 4-sec passes all day.

Round five will be heading to Willowbank Raceway on October 2nd as racers battle it out to stay near the top off points for the finals at Sydney Dragway in November. X275 was the biggest bracket apart from DYO. Terry Seng took home the top trophy after defeating Doug Day in the final. Tony O’Connor took the win in True Street against Dean Goodingham in an all Ford final. 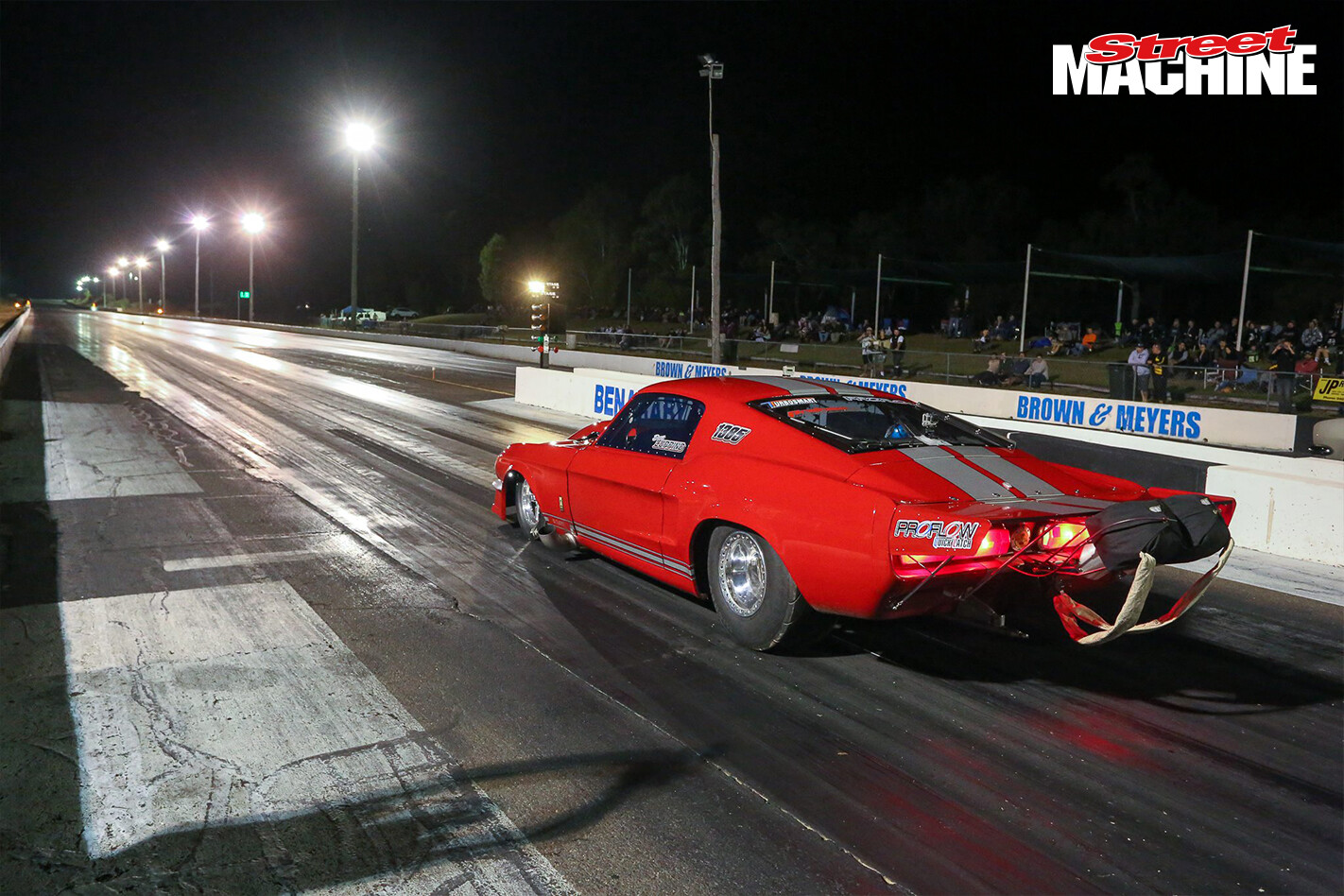 Dom Luppino and his twin turbo Mustang proved unstoppable in Outlaw Radial against some tough competition. Chris Stevermuer in the final of Pro Street Unblown. Dave Hillman’s blown Hemi-powered Valiant hardtop looked the part but shattered first gear on its first launch of the day. 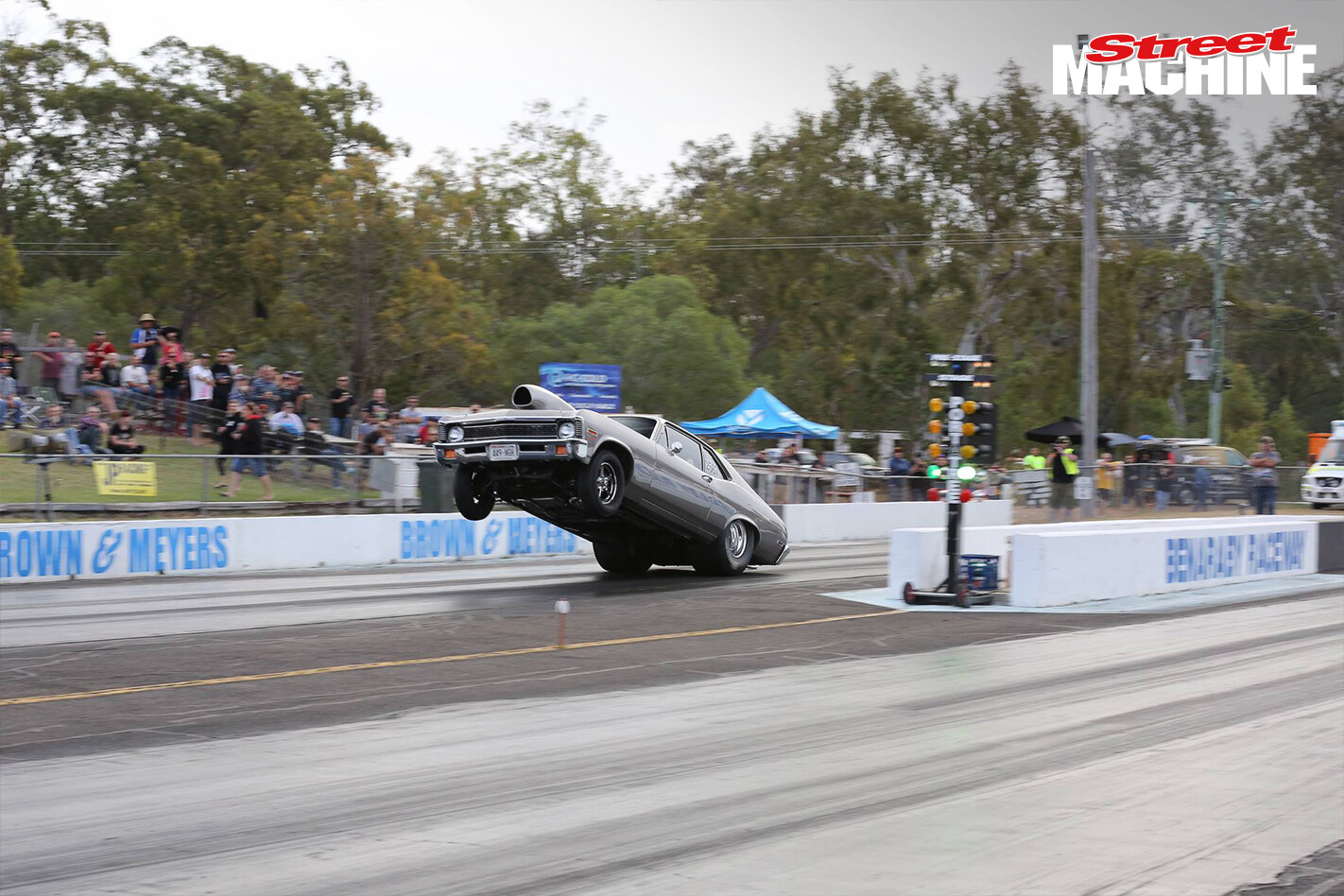 Daniel List’s 632ci Nova pulled amazing wheelstands all day but he couldn’t match the consistency of Chris Stevermuer in the final of Pro Street Unblown. Perry Bullivant has been slowly stepping up the gas in his 665ci big block-powered radial Torana, but he couldn’t match the speed of Dom Luppino in the final. There was plenty of nitrous purged in Benaraby, although turbos were certainly the flavour of the day – they were everywhere! Tony Webb’s subtle-looking LJ Torana missed out by just two-hundredths of a second on a spot in the final of X275. There was a big contingent of Dandy Engines supported cars up north with Tim Cross and Steve Bezzina both running some decent numbers. 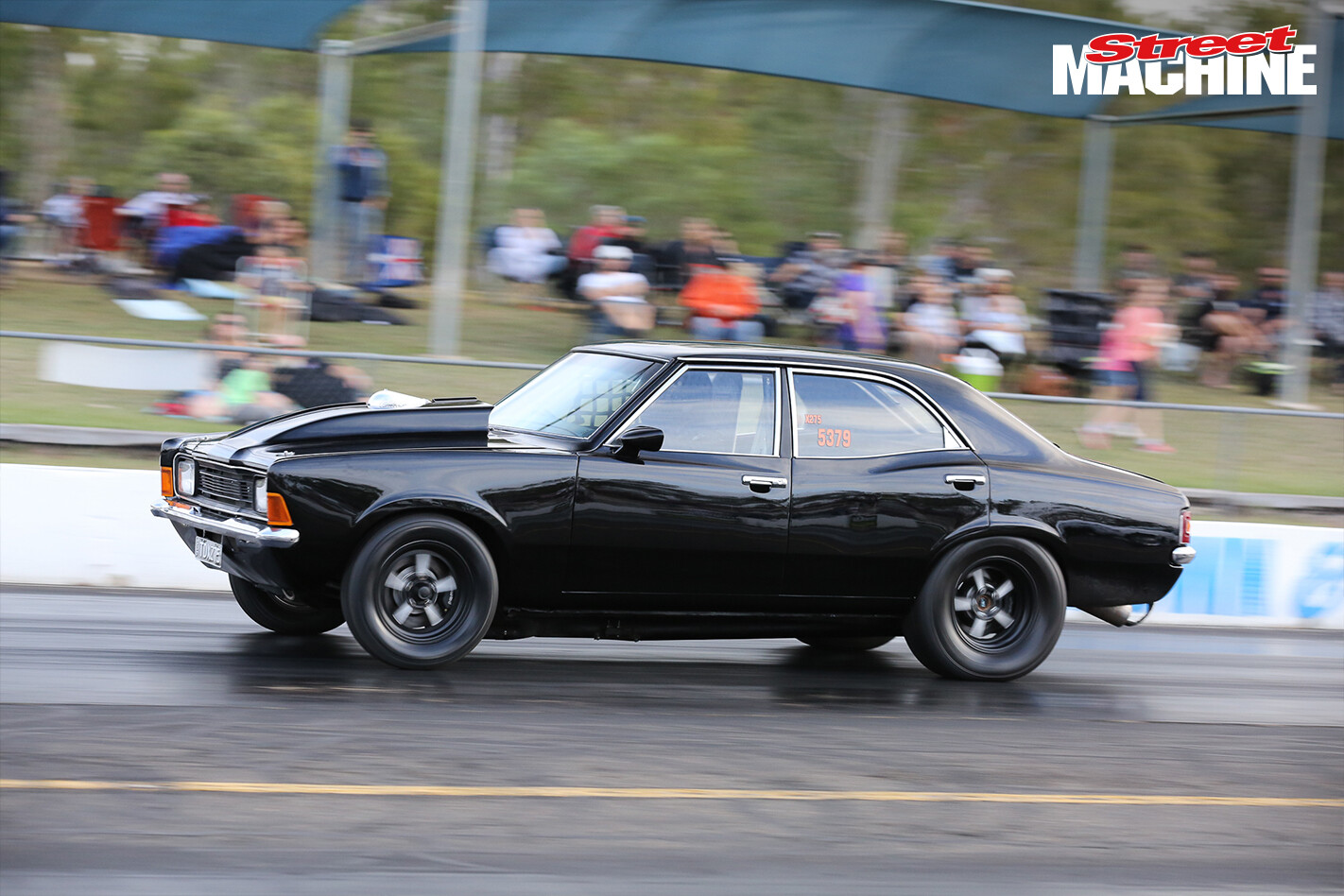 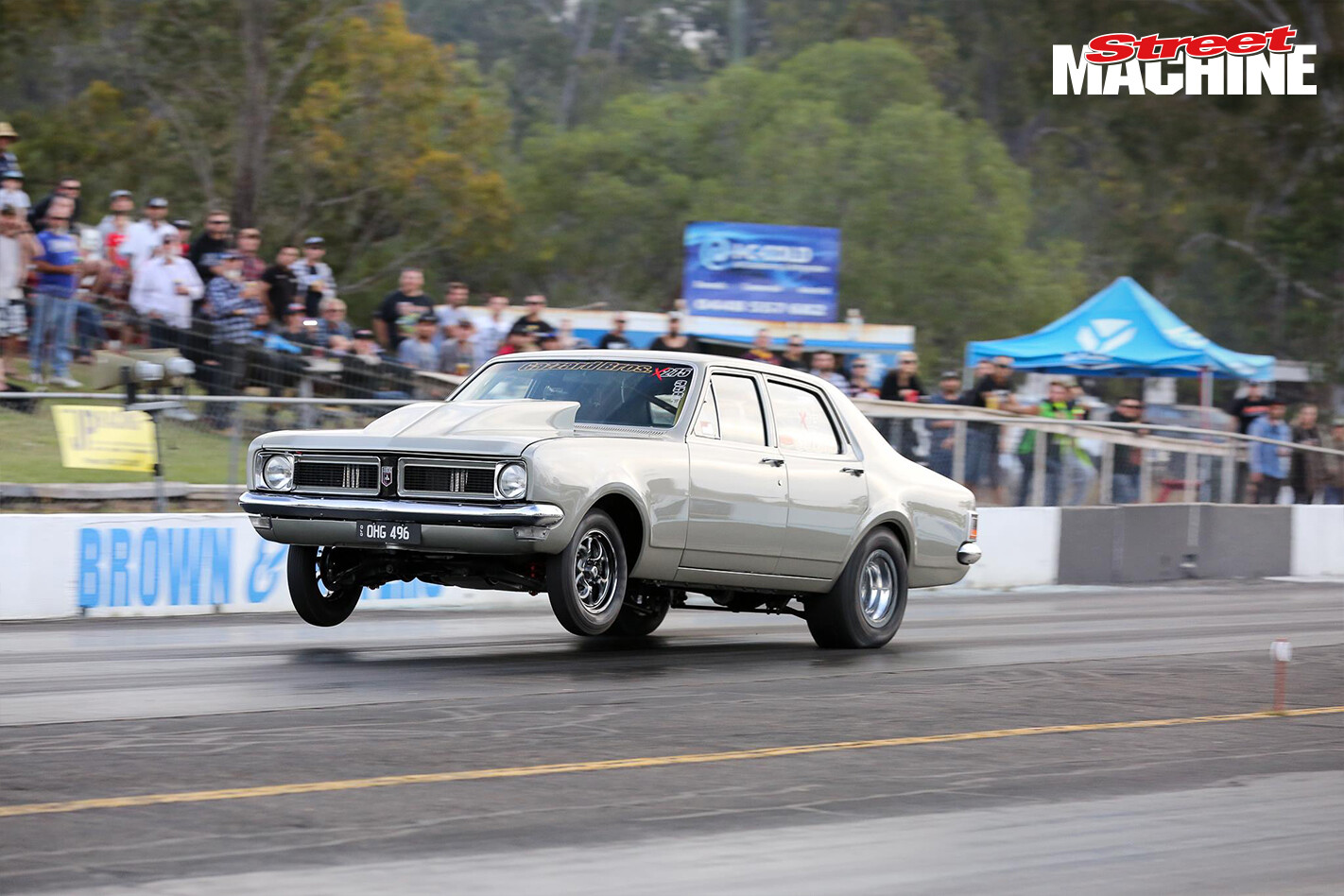 Scott Cortina has his HG Holden honking and recorded the best 60 foot time of any APSA car at the meeting. 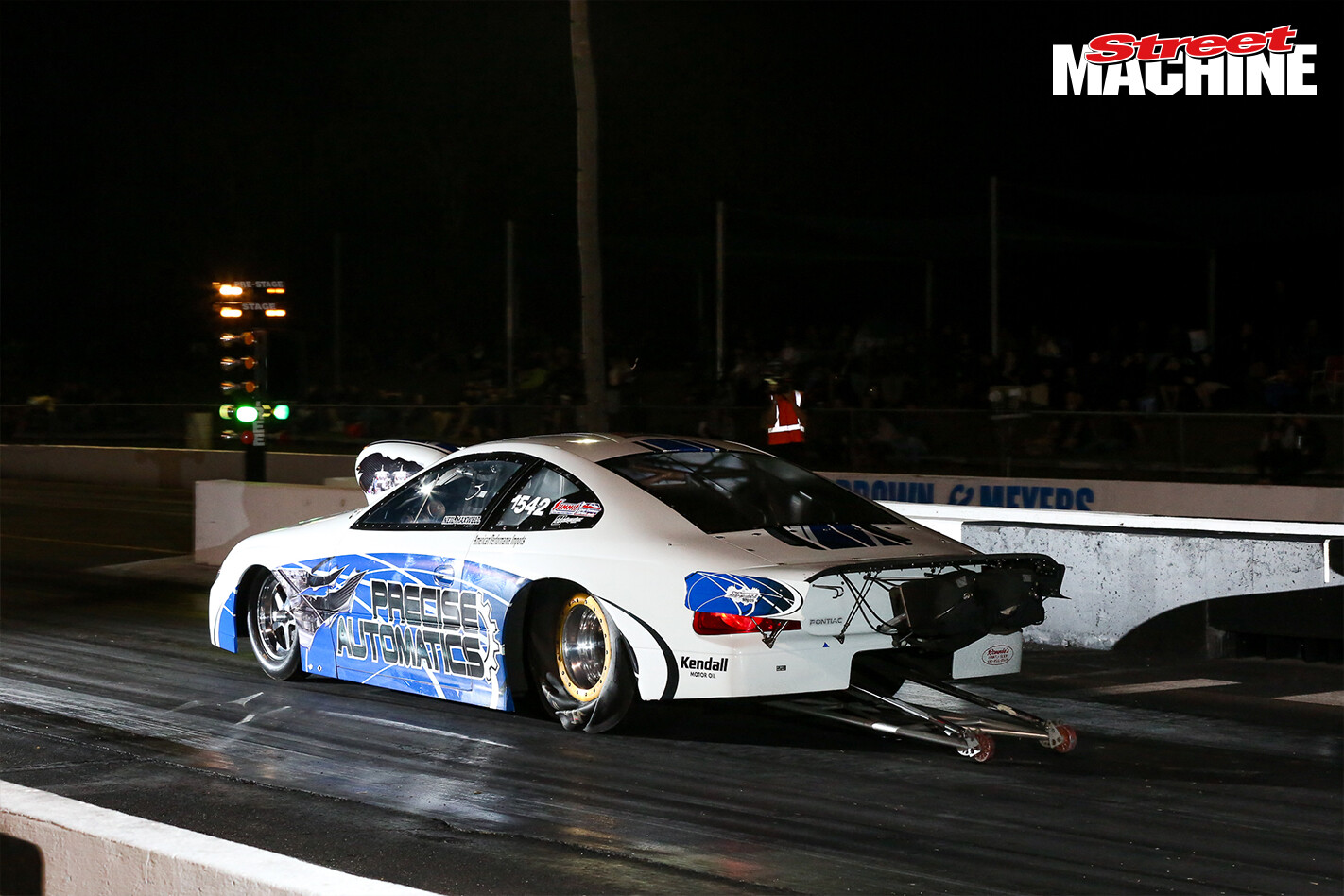 Leigh Darke still hasn’t done a full quarter mile pass with his twin turbo Chev Luv ute, but it’s showing great promise. The little beast runs a 350 Chev with a pair of GT42 turbos and Leigh is giving it a go in 10.5 Outlaw.