THERE is so much to see and so much ground to cover, it’s hard to know if you’ve covered everything. With the weather turning a bit sour yesterday, the crowds inside the halls were even busier, so getting around was a struggle and getting a clear shot of the most popular cars was even harder! But, we’re not complaining. Every corner you turn there is another amazing car, bike, pedal car. The thing to remember is that SEMA isn’t a car show, so the vehicles aren’t all laid out in nice neat rows that you can stroll up and down — you have to go looking for them — and they could be anywhere.

Richard Petty was there signing autographs — you can see him in the background — while his legendary #43 Plymouth Superbird got digitally scanned by a FARO laser arm so that Petty’s Garage can help design a modern version of the aero nose for the current Dodge Challenger line up. Sounds like a good basis for a salt lake racing car to me, but apparently they’ll be going to the middle east to be used as police cars. One of my favourite discoveries was Max Herman’s beach racer that was on display at the Craftsman Tools stand. We met Max — from H&H Flatheads — a couple of years ago at Bonneville where he was looking after the four-banger in the VP Automotive streamliner. Four-bangers are Max’s thing and while the single engine in the streamliner ran twin distributors, this one runs two engines sharing a single (modified) 8BA distributor.

The engines are coupled together using a double-row chain and are timed 45 degrees apart. The firing order is 1-1-2-2-4-4-3-3 — which I guess would make it 1-5-2-6-4-8-3-7 if you considered this a straight-8 engine. It then runs through a Model T transmission that has had the transbrake removed and is now stopped by Model T drums assisted by Rocky Mountain brakes. It’s all based on a Model TT truck chassis and only took three months to build and was raced on the beach at The Race Of Gentlemen earlier this year. Yes it does look like a Chevy Nova, but this is actually the Canadian version which is a Pontiac Acadian. Just as the Mercury Montereys were flasher versions of the Falcon, the Pontiac has a higher trim level than the Novas and featured a lot of GTO pieces. This one was built by JF Launier and he’s named it ‘Andiamo’, which — as all of our Italian readers will know — means ‘Let’s go’. With a 550hp LS3 in it, getting out of here shouldn’t be a problem at all. 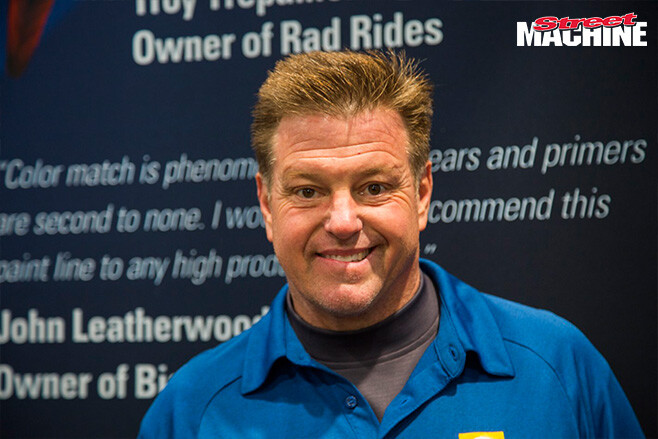 Yep, Chip was there. 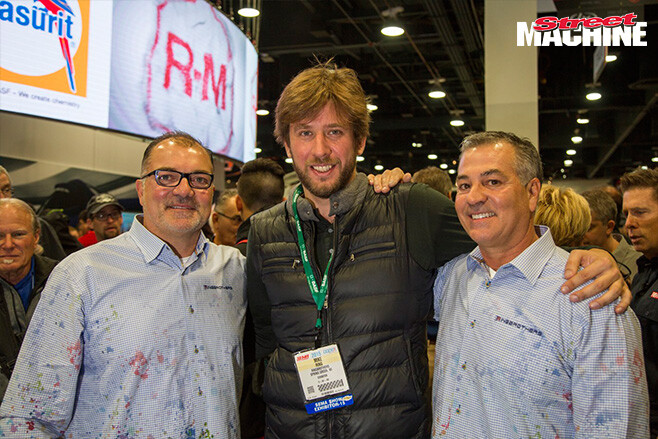 The owner of ‘Espionage’, Timur Sardarov with Mike and Jim Ring from Ringbrothers. When I chatted to Jim he still hadn’t heard from Timur whether he liked the car or not, but judging by this photo he seems pretty pleased with the end result. Apart from deciding on the paint colour, Timur left the entire build in the capable hands of Mike and Jim and SEMA was the first time he had seen the car in the metal — or carbon as the case may be. 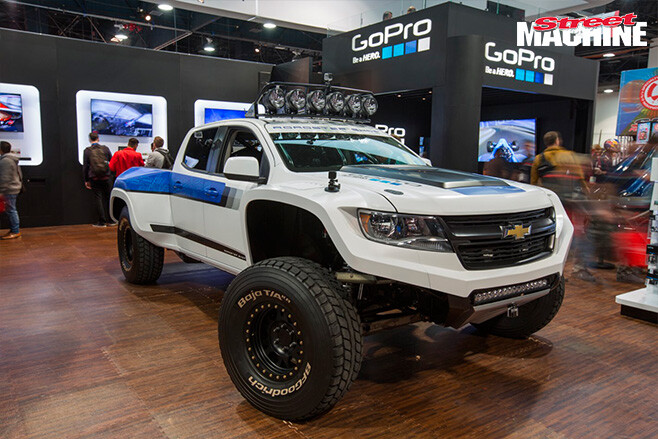 The Roadster Shop debuted another vehicle on the GoPro stand this year, giving this Chevy Colorado a serious tune up. The suspension has been custom built and the fabrication and welding is a thing of beauty. There’s been some serious work to get those 37-inch BFG T/As under the body as well. It looks a bit too nice to bash off a dirt ramp. There are a bunch of cool pedal cars spread around SEMA, but this ’55 Chevy convertible is probably my favourite, — not just from SEMA — but for all time. All I could find out about it was that it is called the ‘Little Howard Hustler’ and was built by Engle Bros Fabrication. 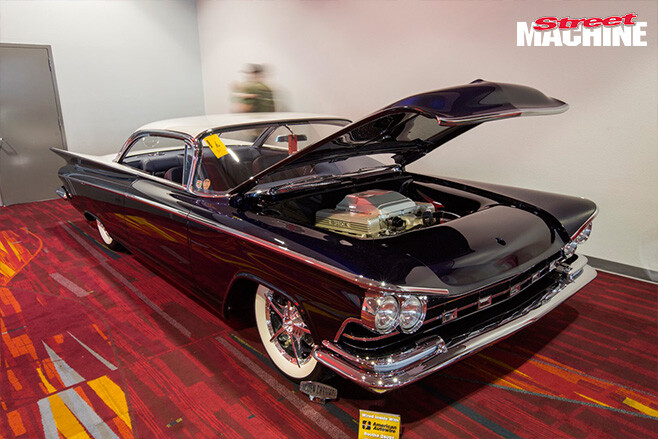 Dave Kindig from Kindig It Designs brought this gorgeous ’59 Buick Invicta to the show. When people see the upright rocker covers they all go: “Yay! You kept the nailhead in it” but then get all sad when they realise it’s actually a cleverly disguised LSA motor. 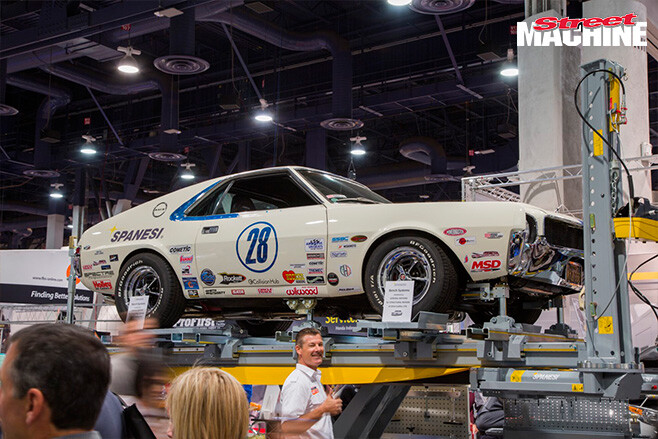 I found a Rambler! This ’69 AMX was built entirely by women in the auto industry as part of the Valkyrie Project sponsored by Spanesi Americas. They do body shop equipment, and although the car is on a chassis rack, there’s absolutely nothing wrong with it. 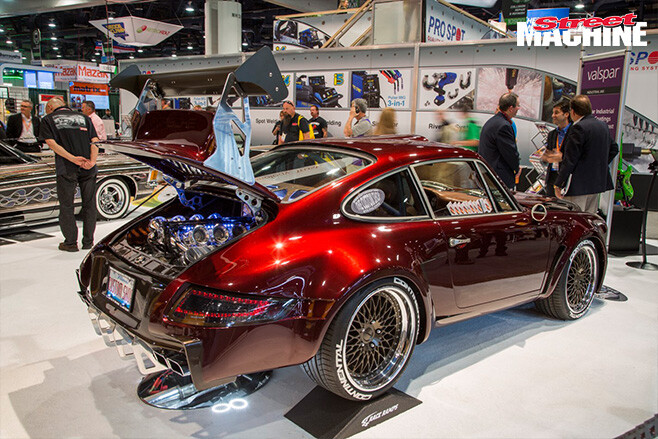 How do you make a Porsche go really, really fast — put an LS3 in the back of it, of course! It’s a 1970 model but has been updated with a modern wide body kit. 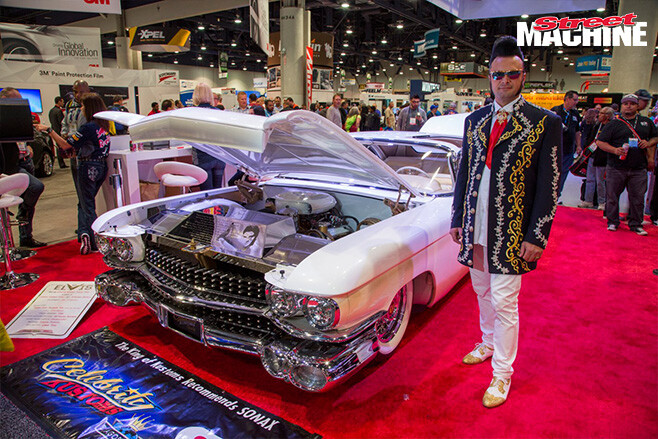 John D’Agostino had his latest creation, Elvis III, on display at the Sonax stand, complete with matching human.