IN THE middle of March each year, an annual migration of Moparphiles (Tightarsus valiantownus) occurs, with hundreds of vehicles and thousands of fans making their way to Albury-Wodonga on the NSW/Victorian border for Chryslers On The Murray. Most begin their yearly journey on the Friday morning, and they travel from all over the country to partake in the social rituals of cruising, drinking and generally catching up with those they haven’t seen in the past 12 months. The increasing age of the flock and largely male population precludes the usual mating rituals, but they do consume large amounts of fermented drinks over the course of the weekend. 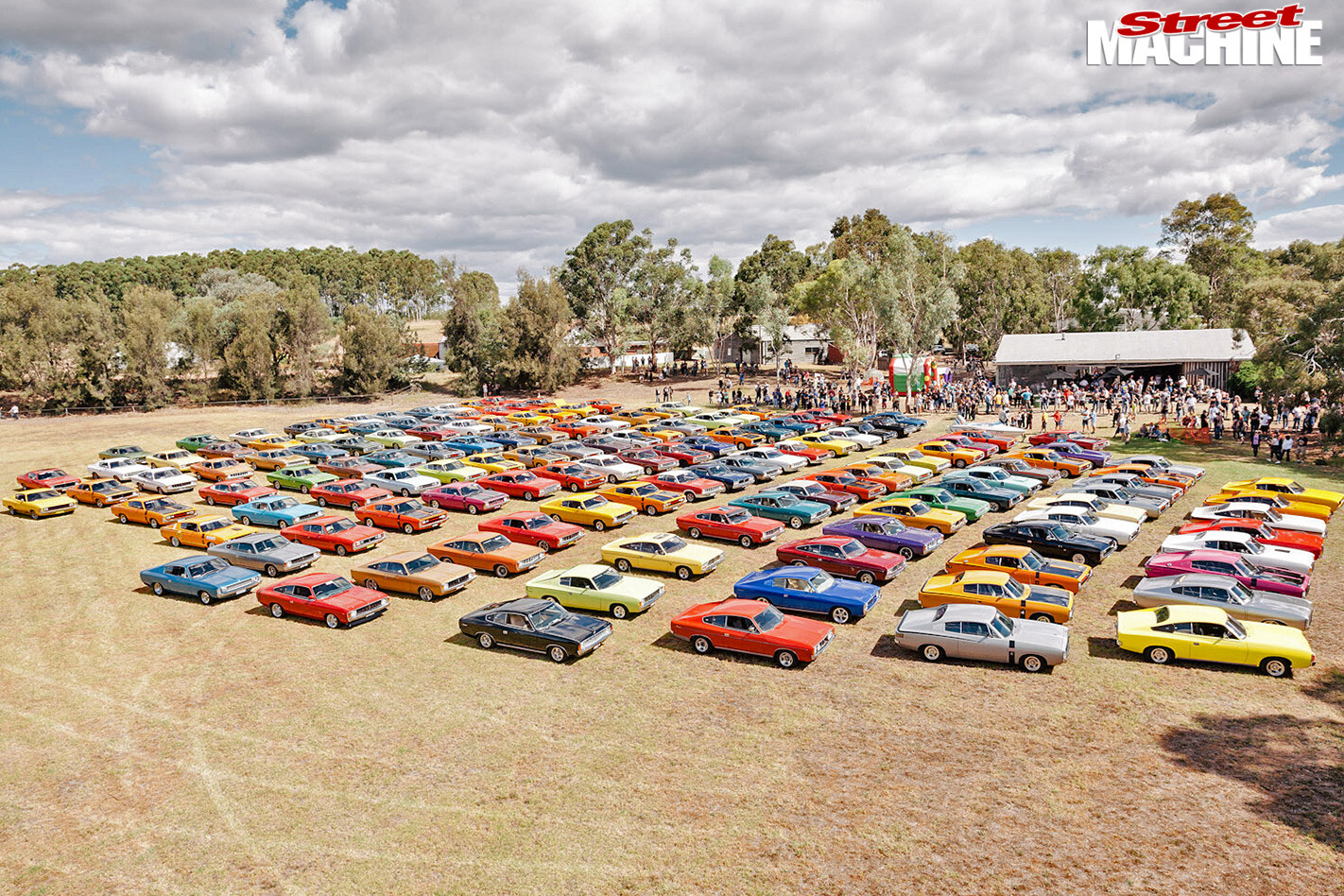 Unfortunately natural attrition claims some of those who choose to make the long and perilous journey. Such was the case this year with Dave Greene’s 1970 Dodge Dart. The old Slant-6 engine ran out of oil on the way to Albury, but they managed to pour some more lifeblood into the aging machine and got it to the border. It wasn’t so lucky getting home though; the normally invincible Slant-6 threw a rod while returning to Melbourne. But Dave wasn’t too upset; he was looking to bolt a stout small-block up front anyway. This was just one of the tales told during this year’s migration, but there have been plenty more stories over the 24-year history of this epic event. Okay, enough of the David Attenborough impersonation. Chryslers On The Murray, or COTM for short, is the place to be if you’ve got even a smidgen of passion for the Pentastar brand. This year they celebrated the 45th anniversary of the Valiant Charger, which meant there were ducktailed two-door Valiants as far as the eye could see. Over 250 showed up at Gateway Park to bring the total number of Mopars to 736 for the weekend, and the majority of them were extremely tidy examples – the kind of cars you would trade body parts for. The weekend’s festivities kicked off with some track time out at the Motorsports Training Australia facility south of Wodonga, where entrants were given the opportunity to have a crack at the go-to-whoa or timed circuit sprints. Unfortunately the inclement weather made a mess of things on Friday, so the organisers probably didn’t get as many takers as they were hoping for. 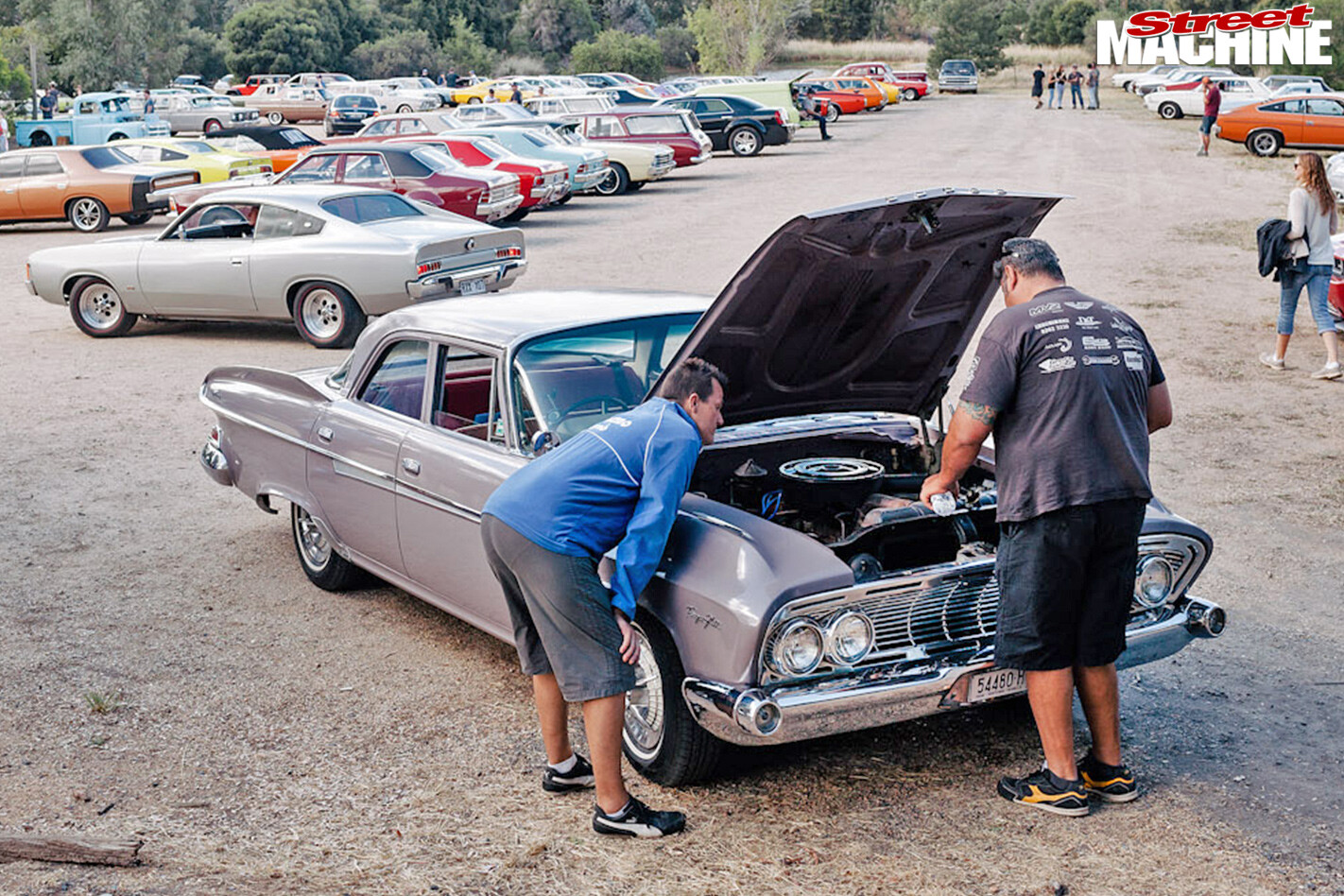 Saturday brought out the usual suspects for the swap meet and show judging, and the field quickly filled up with so many Mopars that it felt like Sunday – until everyone packed up and headed for Ettamogah Pub. 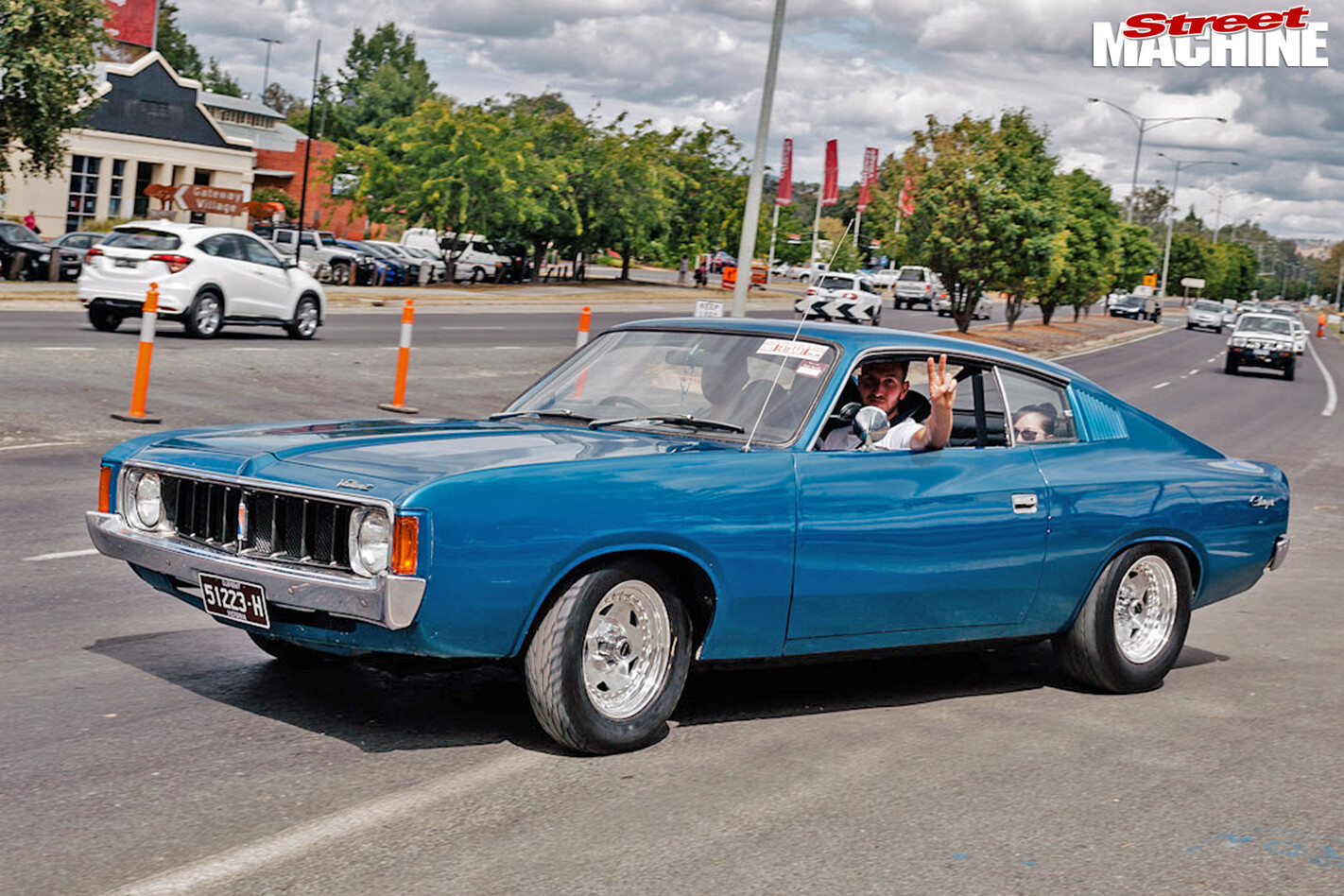 As usual the cruising scene was pretty good, with the local constabulary taking a relaxed approach. If you stepped out of line they were there to show you the error of your ways, but they didn’t look like they were punishing people for just being on the streets. So we got to see cars like Darrin Stokes’s blown and injected ’71 ’Cuda cruising around town, along with plenty of other tough machinery. There was some serious mumbo getting around. Jim Cemal’s 408ci small block-powered CL Charger has been bored out to 415ci, and turned heads whenever it cruised on past – with 514rwhp naturally aspirated, the car was punching well above its weight. In fact the dyno competition was very well supported this year as the team from Webster’s Dyno put car after car through their paces. Jim Cemal won the small-block class, while Michael McLean won the Hemi-six class with his turbo Charger producing 365rwhp, and Darrin Stokes cleaned up the big-block class with 564rwhp in the blown ’Cuda. The real surprise package of the weekend though was Norm Clarke’s stock Dodge Hellcat Charger; it took home the Highest Horsepower Overall trophy with 626.1rwhp. That’s impressive! 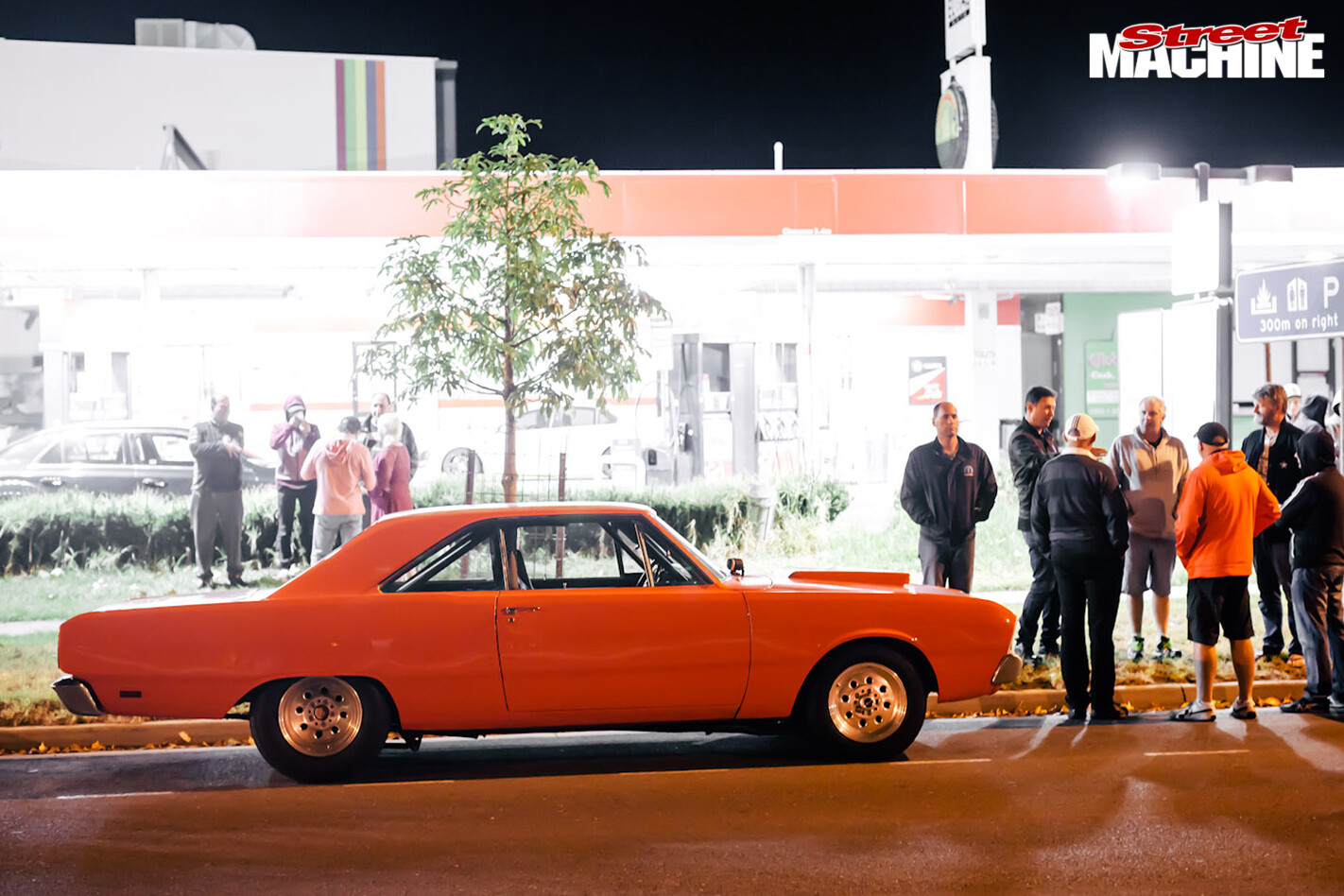 Chryslers On The Murray will be back next year, 17-19 March, with the main focus being on the first and last versions of the locally produced breed – the R- and S-Series models and the CL and CM models. It’ll also be the 25th anniversary of COTM, so well worth the effort to get there. Mark your calendars.

Some of the highlights from this year's Chryslers On The Murray: 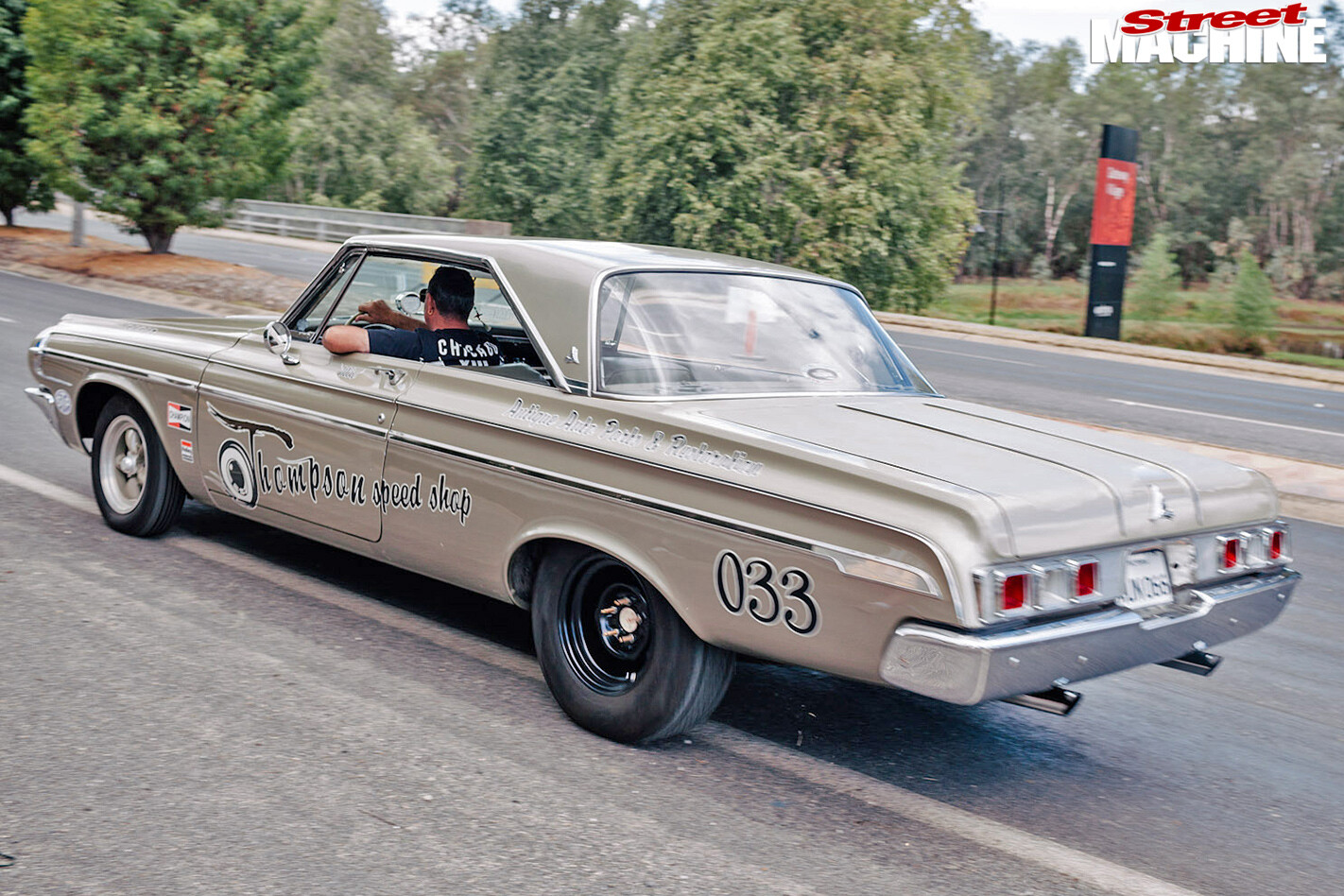 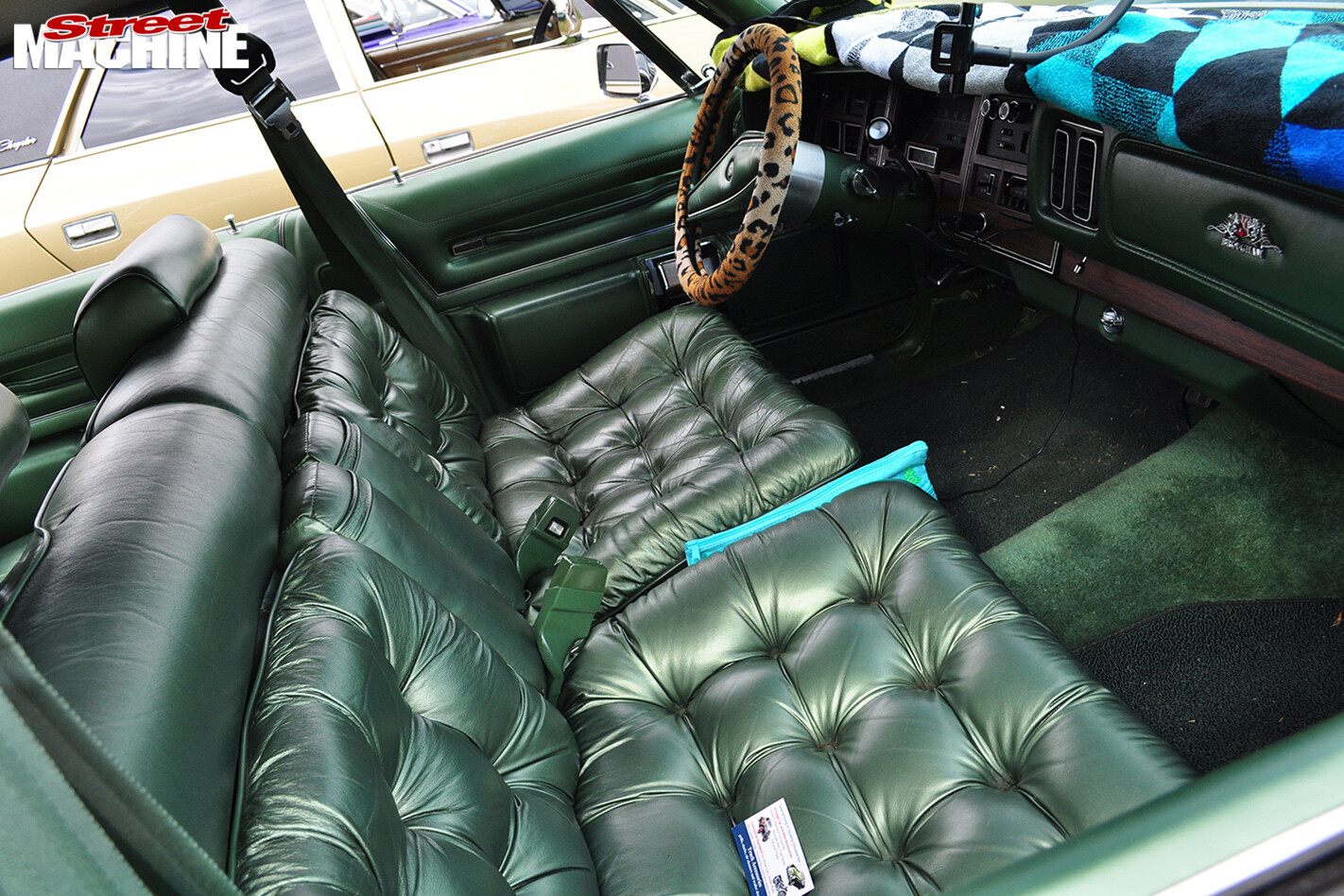 Ever wanted to cruise around in something more comfortable than your lounge room? Then check out the interior on this 1977 Chrysler New Yorker sedan 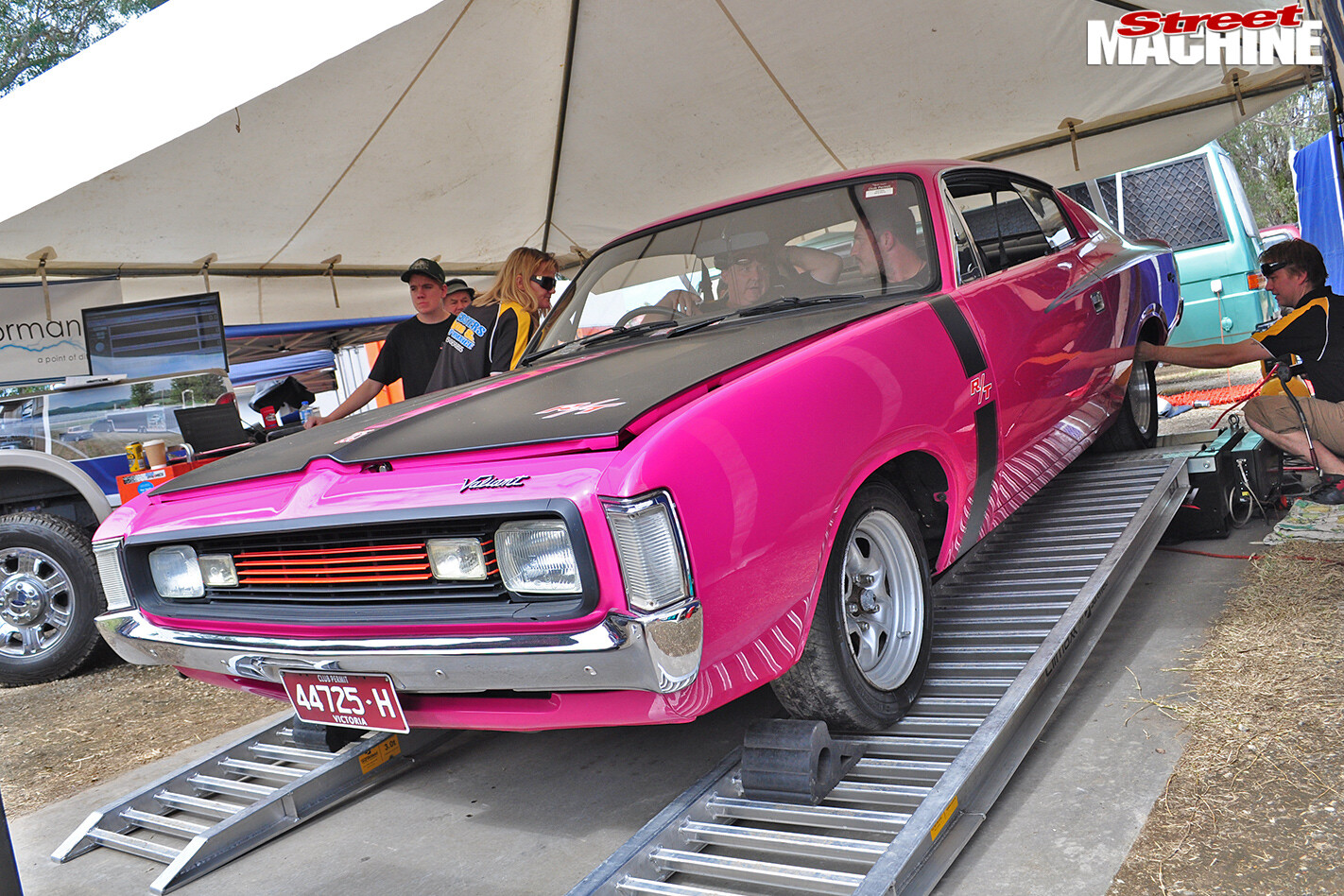 You may remember Georgio Lafazani's Magenta Chrysler R/T Charger from our Aug '15 issue. With a set of 50mm Webers hanging off the worked Hemi-six, he managed to produce 336rwhp and took out the naturally aspirated six-cylinder class on the dyno

22
More than a few Chargers were used to tow boats or caravans back in the day. We can't imagine too many were E49s, but this is a pretty cool combination. The speedboat is a Chrysler Conqueror 105 with a 140hp Chrysler Charger outboard Stephen Gay's one-of-one automatic R/T Charger is unique, and recently underwent a massive resto. The Hemi Orange two-barrel car was originally exported to the UK and was brought back here for restoration

22
Chrysler's leaning tower of power. The Slant-6 was available in three different capacities and used from 1960 through to 1987, and looks best with long ram intakes or multiple carbies 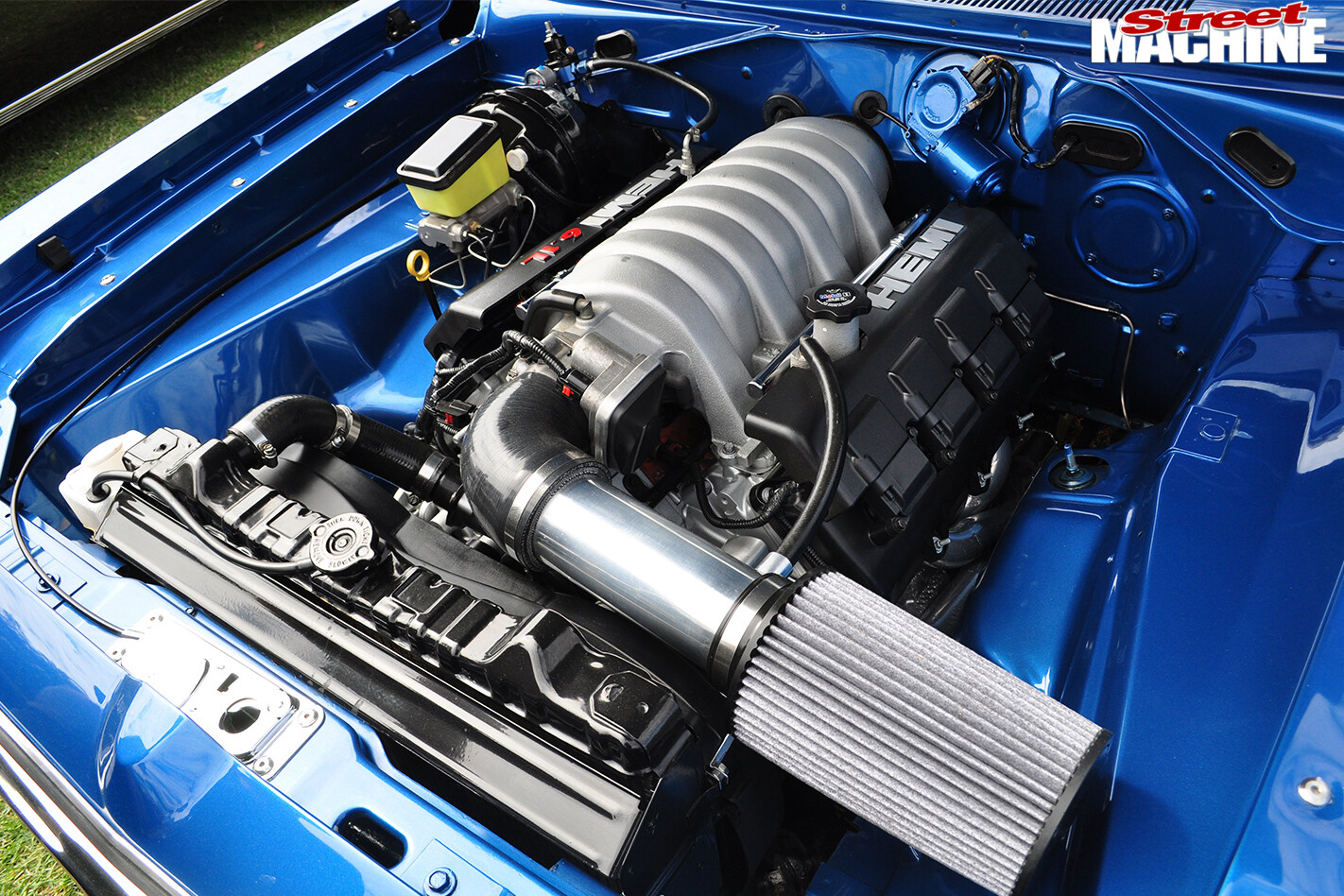 George Poulson used to drag race at Adelaide Raceway but has now retreated to the garage to build this killer VJ Valiant Regal hardtop. It runs a late-model 6.1 Hemi with a five-speed auto and a Dana 70 truck diff

22
The Ettamogah Pub was closed for a couple of years, but they've reopened now and it was awesome to see over 150 Chargers parked behind the pub