THE phatness of pro touring is so rarely applied to our classic Aussie metal, but Glenn Profilio has changed that with his FC ute. And with the boys at Down Town Kustoms making a name for themselves with their off-tap builds over the past few years – Dave and Lyn Keen’s FJ coupe and Pete Sharp’s SHQRP Monaro being cases in point – Glenn was more than happy to task them with the build, which now stands as a masterclass in how to build an Aussie pro touring car to an elite standard.

Glenn wanted to create a thoroughly modern driver stashed in the body of a 57-year-old ute, so DTK fabbed up a complete chassis, four-link rear end and a custom tubular-arm front end incorporating a late-model steering rack. Eschewing ’bags, coil springs were fitted all ’round, with set-up determined by the combination of stance and practicality needed to fit the big Intro alloys.

And while the body is basically perfect, sprayed in HOK custom grey and gapped, filed, filled and preened to within an inch of its life, it’s the unseen touches that intrigue and inspire. Hinges, door strikers, latches and mechanisms are all contemporary equipment and are all glaringly awesome when revealed by an open door or dropped tailgate.

As befitting such a beautiful machine, DTK didn’t muck around with second-hand ex-chaser engines for the FC; an E-Rod LS3 kit was sourced from GM, including the engine, transmission, wiring, sensors, fly-by-wire throttle, catalytic converter and ECU.

The ute had been dubbed ‘Refined’, which suits this build perfectly, as was reflected in its 2015 Meguiar’s MotorEx trophy haul: Best Design & Execution, Best Engine Bay and Top Street Machine. 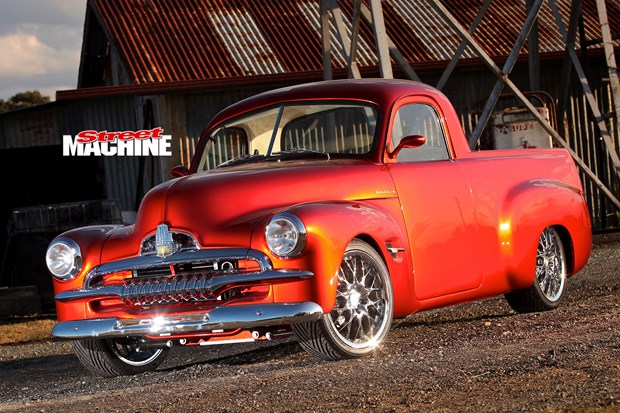