CHRIS Christou was famous for his Eager-frying exploits back in the 80s in his GTHO Phase III. Son Rhys openly admits that as a young lad he wanted to follow in his father’s carbon-rich footsteps, and being the supportive type, Chris was only too happy to both encourage and facilitate, teaching Rhys some valuable body repair and mechanical skills in the process.

The Christous sourced a K-coded XA coupe, which they earmarked as the family’s next skid pig, but genetics intervened. “I’ve always had a soft spot for XR sedans,” Rhys admits, “so when this one came up, I jumped on it and sold the coupe.”

Being the skidworthy family that they are, Rhys built up the XR with burnout duties in mind, but never thought the build would blow out to 11 long years. The lengthy gestation can be attributed to two things: Rhys learning his panel-beating trade on the big sedan, and his youthful exuberance for changing his mind!

“I did the tubs three times; I started with a small pair, chopped them out for something bigger, then re-did them again years later when I decided they weren’t good enough!” he explains.

When it comes to burnouts, set-up is important, but it’s nothing without horsepower, hence the World Power 427ci stroker up front. Happily running on 98 PULP, the Windsor is good for 650 horses and plenty of fun, but when the skid pan beckons, Rhys can crack the tap on the Nitrous Express bottle, unleashing over 1000hp and laying waste to any tyre that crosses his path.

Black as pitch both outside and under the bonnet, with a blood red interior, it almost looks too good to skid: “It is a bit too nice at the moment!” Rhys admits. But we suspect that, given Rhys’s heritage, the XR’s Windsor, fat Mickey Thompsons, transbraked ’Glide and rock-solid nine-inch won’t have long to meet their fate. 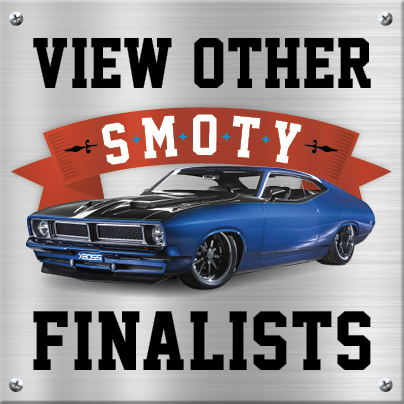