Peter Hinz, with his 1951 Chev pickup, is Street Machine Summernats 30's king of the street class. Peter, who built his '51 with the team at Pat's Pro Restorations in Beaudesert Queensland, debuted the metallic grey-hued pickup in the Elite Hall's Great Meguirs Uncover on Friday night after keeping the build of his highly detailed cruiser largely secret but it rose above a high-quality bunch of streeters to score Top Judged Street, 3rd Top Engine Bay, 3rd Top Interior, Top Standard Paint, Top Bodywork and, after a strong performance in the driving events, Top Street Overall.

It's a great result for a pickup truck that, before it was rebuilt, tried to throw the Queensland builder off a twisty in the Gold Coast Hinterland. 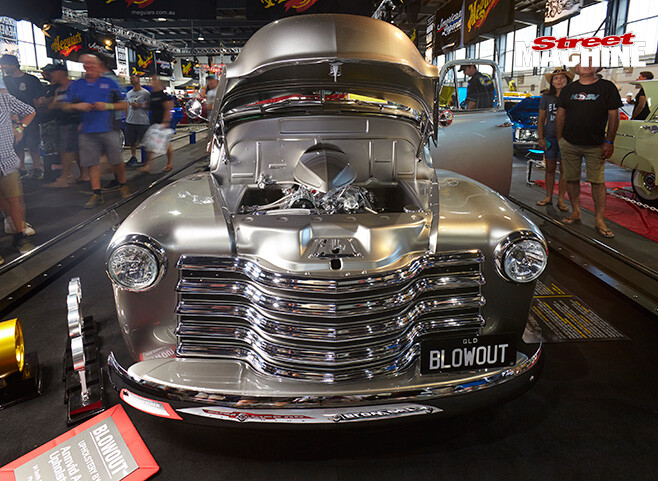 “Yep, the bloody thing tried to kill me!” Peter told us just after he accepted his suitcase full of awards. “That was when it had the old I-beam front suspension.”

Tech-wise, that was a looong time ago with the '51 now riding on its boxed original chassis supported on a pro-touring style Heidt's Mustang II-based double A-arm independent front suspension and TruTrac- enhanced nine-inch rear on QA1 coil-overs. Power comes from an old-school small-block Chev popped out to 383 cubes, programmed by a roller hydraulic cam and fed from a Holley Quick Fuel carby. The trans is a Bob Grant-built GM four-speed TH700 automatic with a lock up torque convertor so with the 3.5 gears it's a relaxed Sunday cruiser. 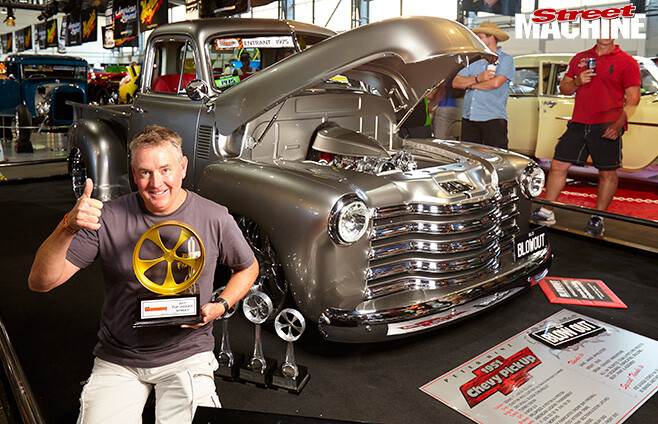 There's plenty of great detail closer to Glasurit-tinselled Sonic Titanium (taken from a late-model Lexus) paint surface, too. Surprisingly, the early 50s Chev features most of its original sheet-metal but the old two-piece (stitched down the centre-line) bonnet is now a a smooth hand-fabbed replacement The rear guards were widened 25mm and all four were carefully filed 'n fitted sharp to the body without the original beading. The doors have been carefully fitted with Trigue Engineering burst-proof latches and rebuilt hinges to swing with the crisp accuracy and solid thunk of a big-buck Benz or Lexus to let Peter and his mob access to the leather-trimmed three-seat bench seat. Of course, there's air-con, too.

Peter's plan for the stunning Chev ute.. err...pickup is to cruise the American Legend wheels off it but for now, he's going to bask in the glory of being Summernats 30's Top Overall Streeter. Top effort!