THE DYNO Hall was stuffed with metal and flesh for Summernats 30, with dozens of entrants through the door to see what kind of power their cars can make, and hundreds of regular slushie-suckers in the stands enjoying the spectacle.

Adam Rogash and the MPW Performance boys were running the Horsepower Heroes show this year, and, while they only had one dynamometer compared to previous years’ twin set-up, they steadily worked their way down the line and got the job done. 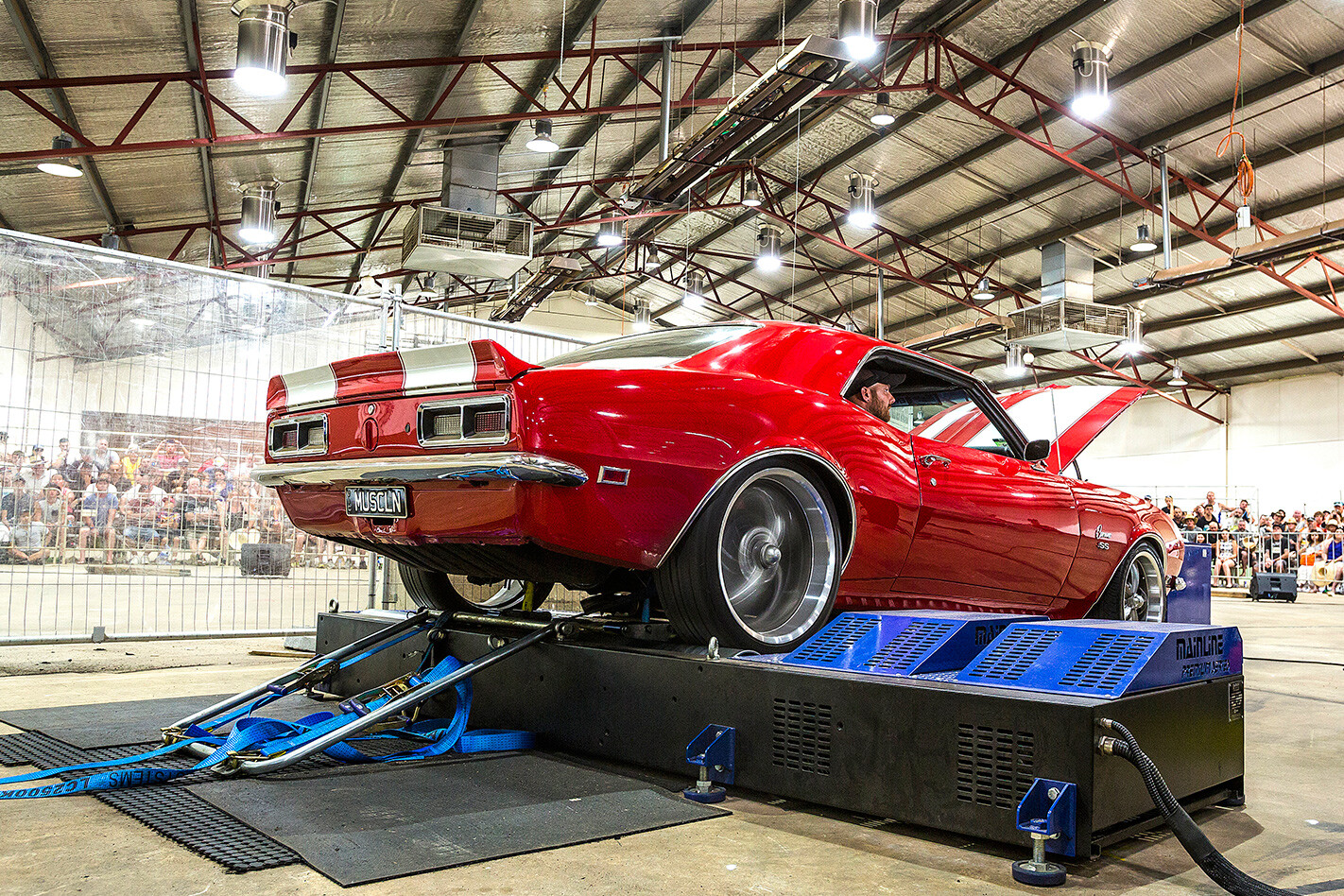 While the early Qualifying saw strong results from turbo fours and sixes, everyone was hanging out for the top-dog Forced Induction 8-Cylinder class, which saw a familiar face back in the Hall. Mr. Horsepower Hero 2008, Craig Munro, brought back his legendary TRYHRD HSV to have a go at knocking off Summernats’ number-one horse breaker, Jake Edwards and his 2000hp LH Torana, but it didn’t all go to plan. 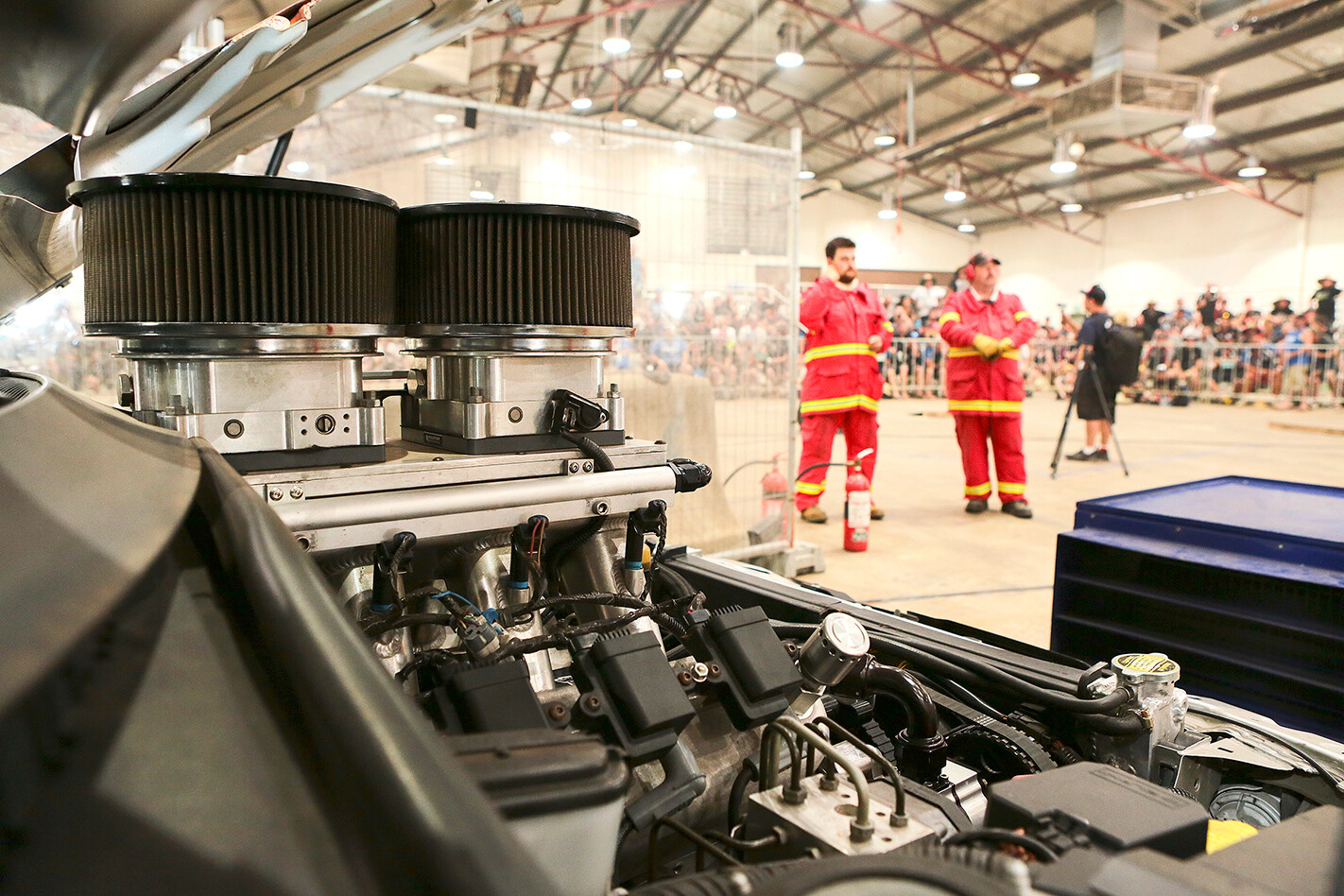 With a new twin-turbo LS combo in the VX Clubsport, Craig was looking to go deep into four figures, but a leaking blow-off valve held him to 15psi of boost instead of his normal 40psi. He only managed a best of 798hp in Qualifying – a long way short of the car’s 1800hp potential. Jake Edwards pushed the Merlin 3 big-block up to a 4.5-inch bore, taking the Chev to 477cui and dropping compression slightly. But even with the same cast heads and his “small” 110mm turbo from 2016, that was still enough to see off the threat of TRYHRD. With only 30psi, Jake made 1461hp to qualify in the lead for Sunday’s finale.

Those expecting a showdown on Sunday got much more they bargained for when drama flared up because both Craig and Jake wanted last place in the running order. In the interests of fairness, officials had random spectators draw the three finalists’ entrant numbers out of a hat to set the order. This put third-placed Greg South up first in his twin-turbo 427cui LSX HQ sedan, followed by Craig, then Jake. 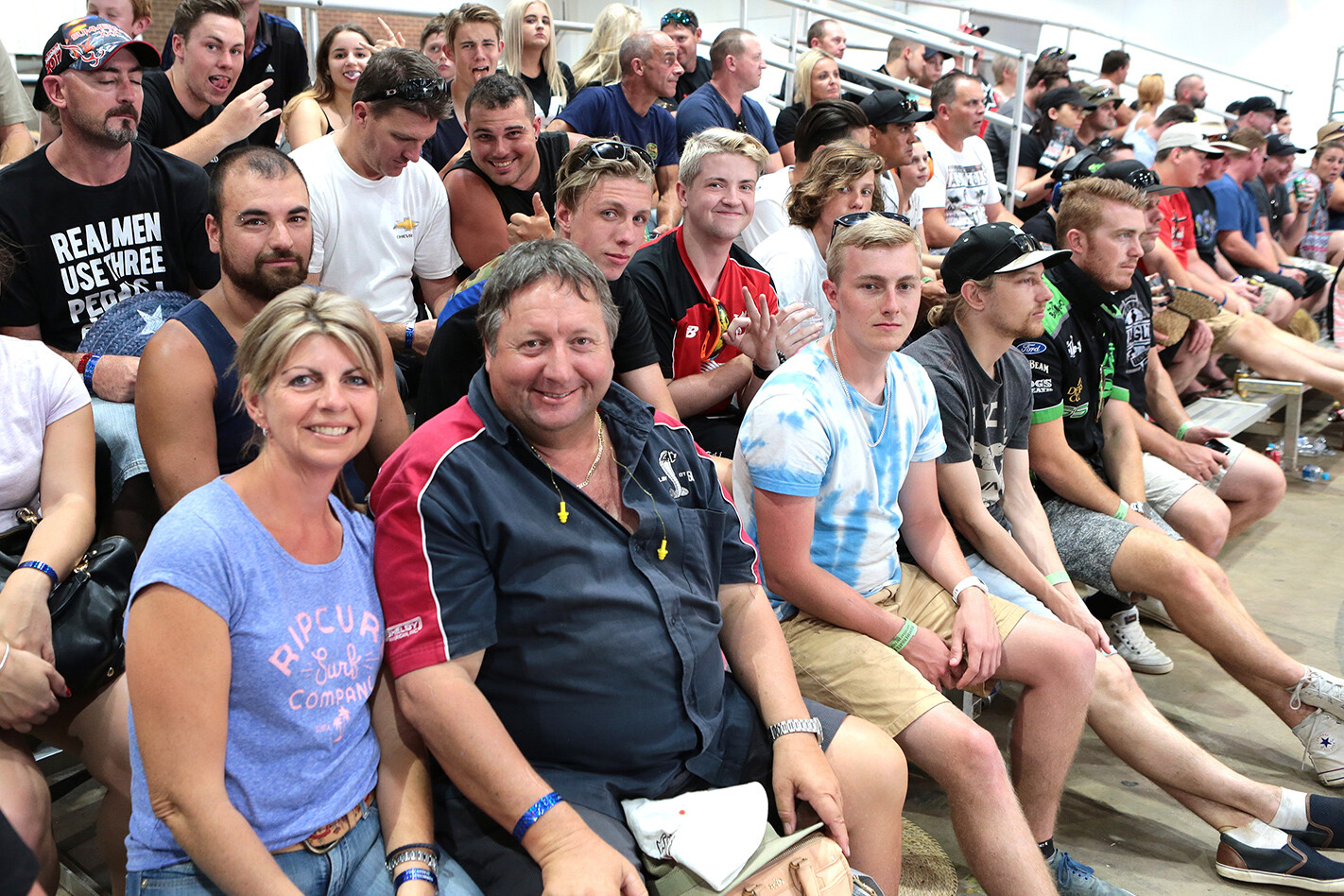 Craig protested this result by taking the HSV out of the Hall, but brought it back 15 minutes later. He parked it with bags of ice on the engine, but then couldn’t be located as his timeslot approached. After a 10-minute wait, the crowd counted down the final 10 seconds, and he was disqualified. 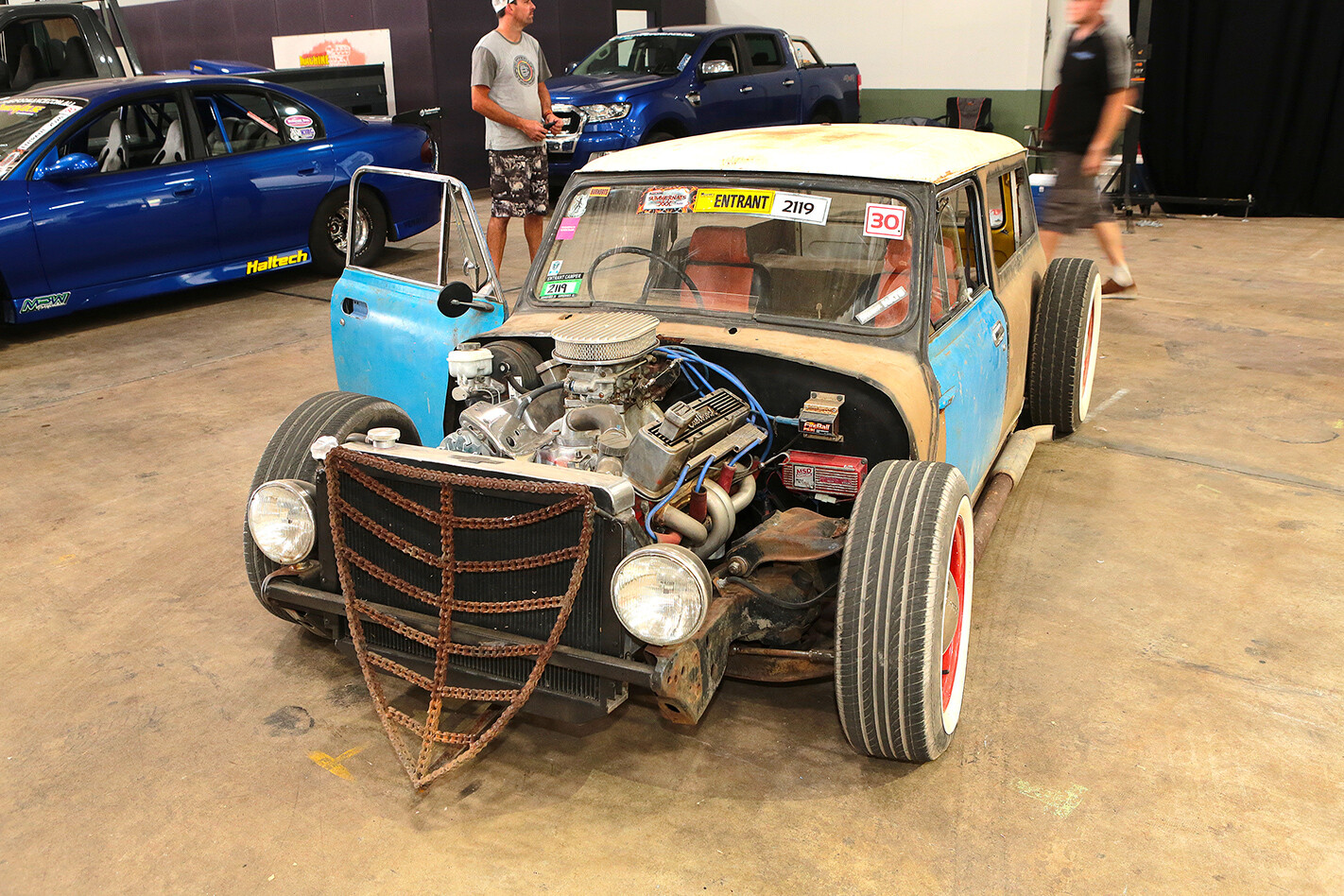 Jake fired up the Torana and smashed out a best of 1663hp at 40psi to take his sixth win at Summernats Horsepower Heroes. Although that’s well short of his Summernats benchmark of 2025hp, set at Summernats 28, to be fair, Jake hadn’t planned on running this year and had left the car on display elsewhere! 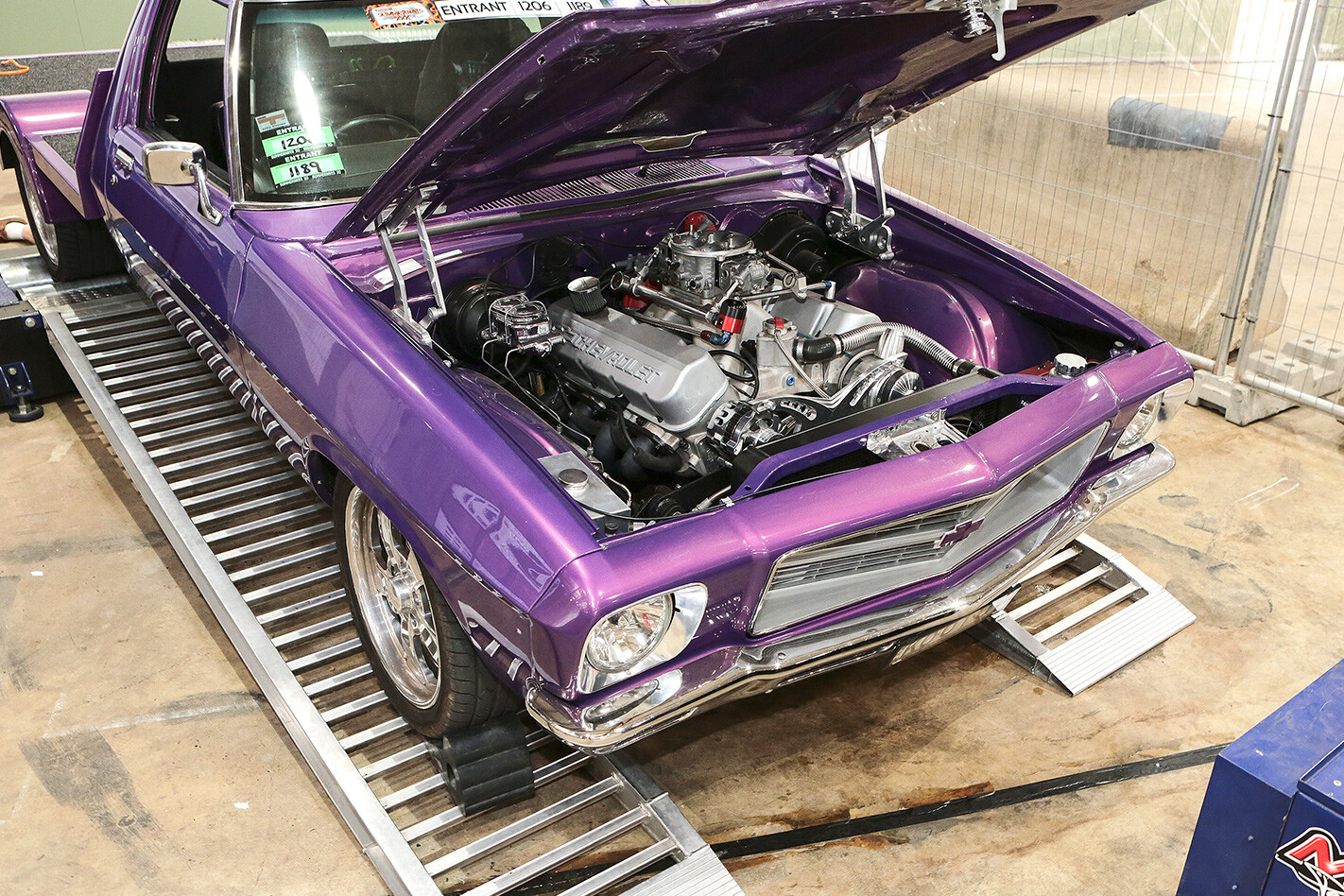 Karly Van’s awesome One Tonner was back for the third year in a row, with the 632cui big-block Chev singing a best of 561hp to finish second in the NA 8-C class The King of the Dyno for the fifth time, Jake Edwards said 2017 will be the last year he runs this engine in the famous yellow Torana, now he has a tube-frame Camira drag chassis 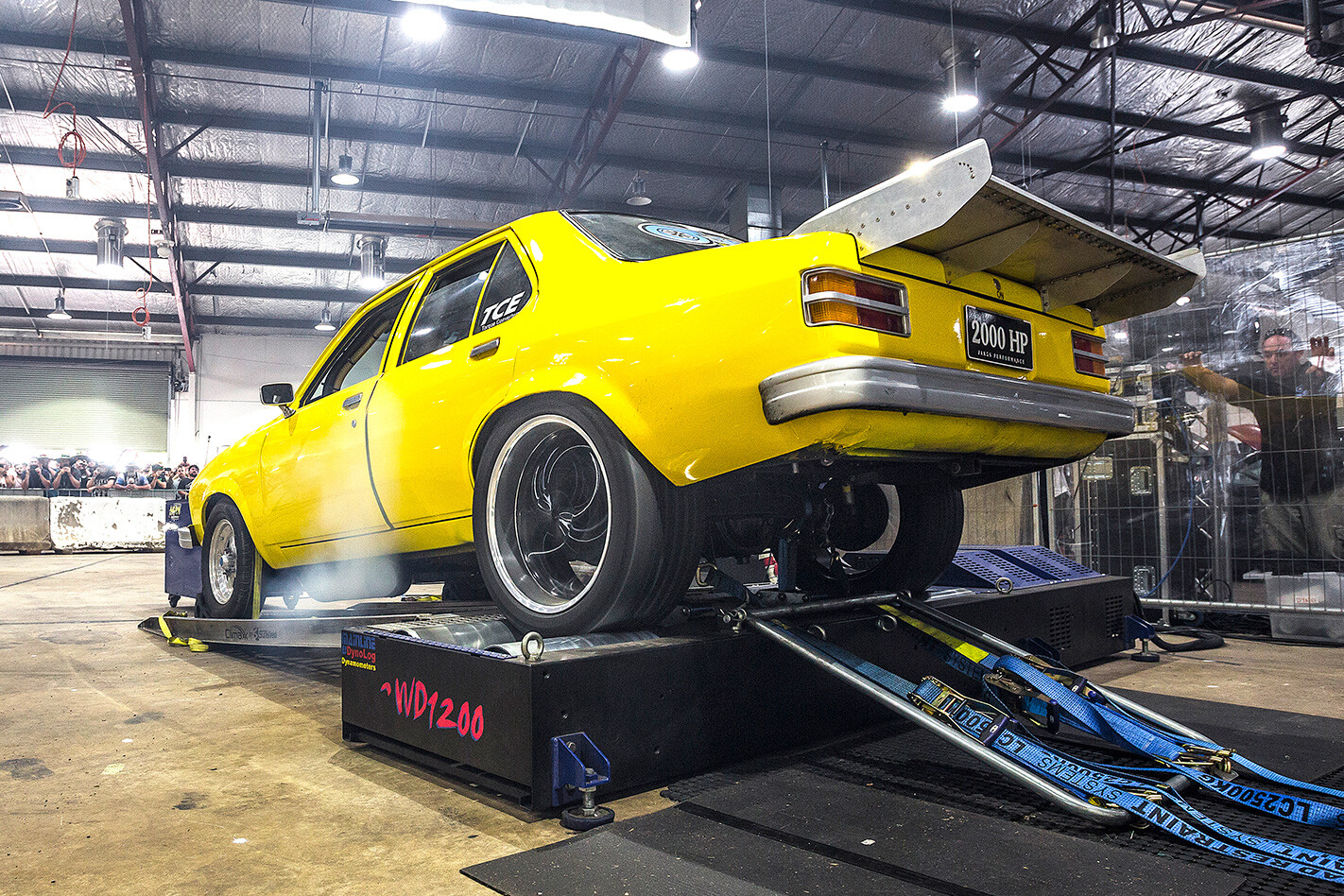 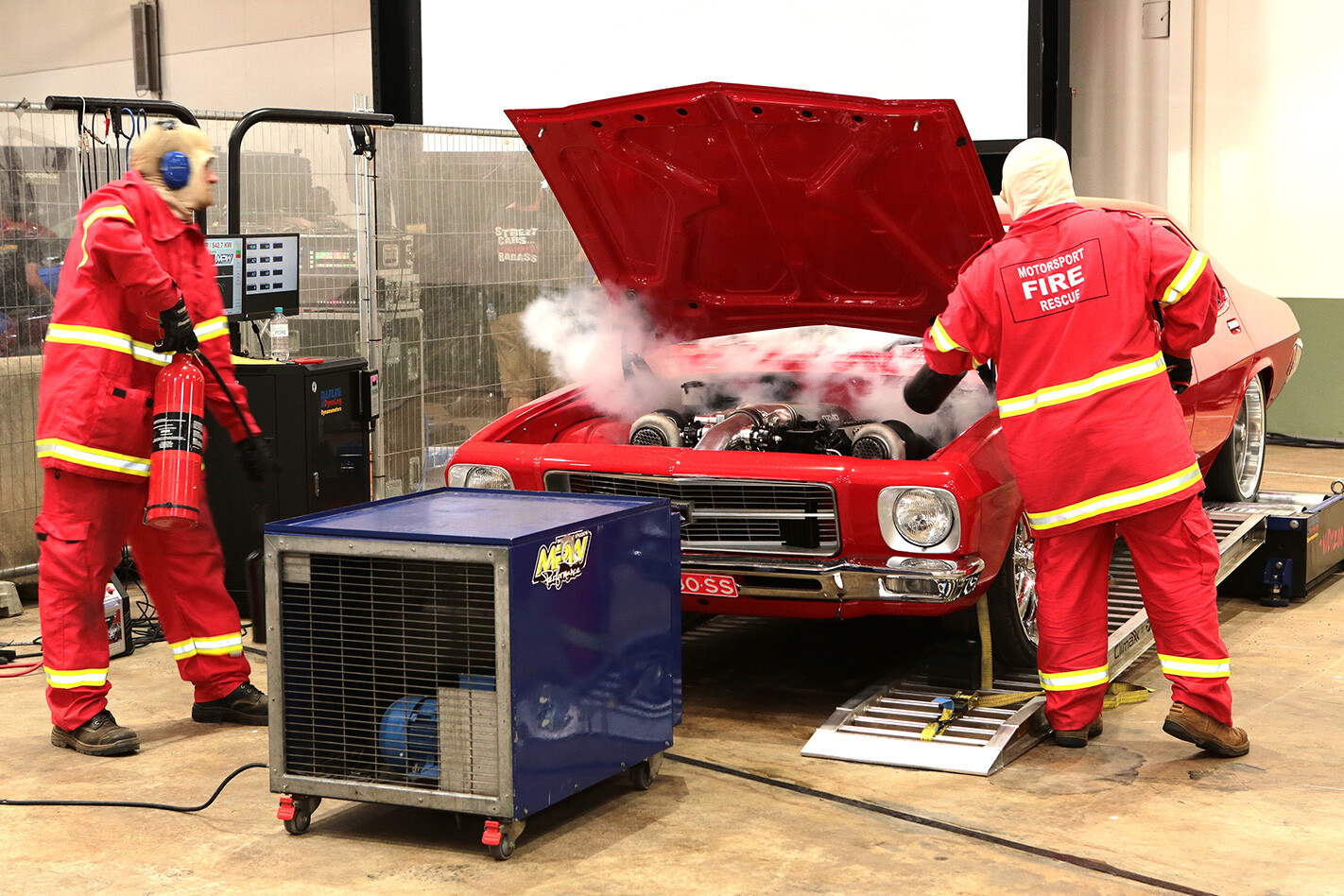 Greg South’s HQ is fully engineered with its 427cui LSX and twin Precision turbos. The former Street Machine feature car has made over 1100hp on Mick’s Motorport’s hub dyno, though it qualified for the Forced Induction 8-Cylinder finals with 755hp. Greg decided not to fiddle with the Haltech ECU for Sunday and backed it up with 747.9hp to finish second overall and win Outstanding Engineering 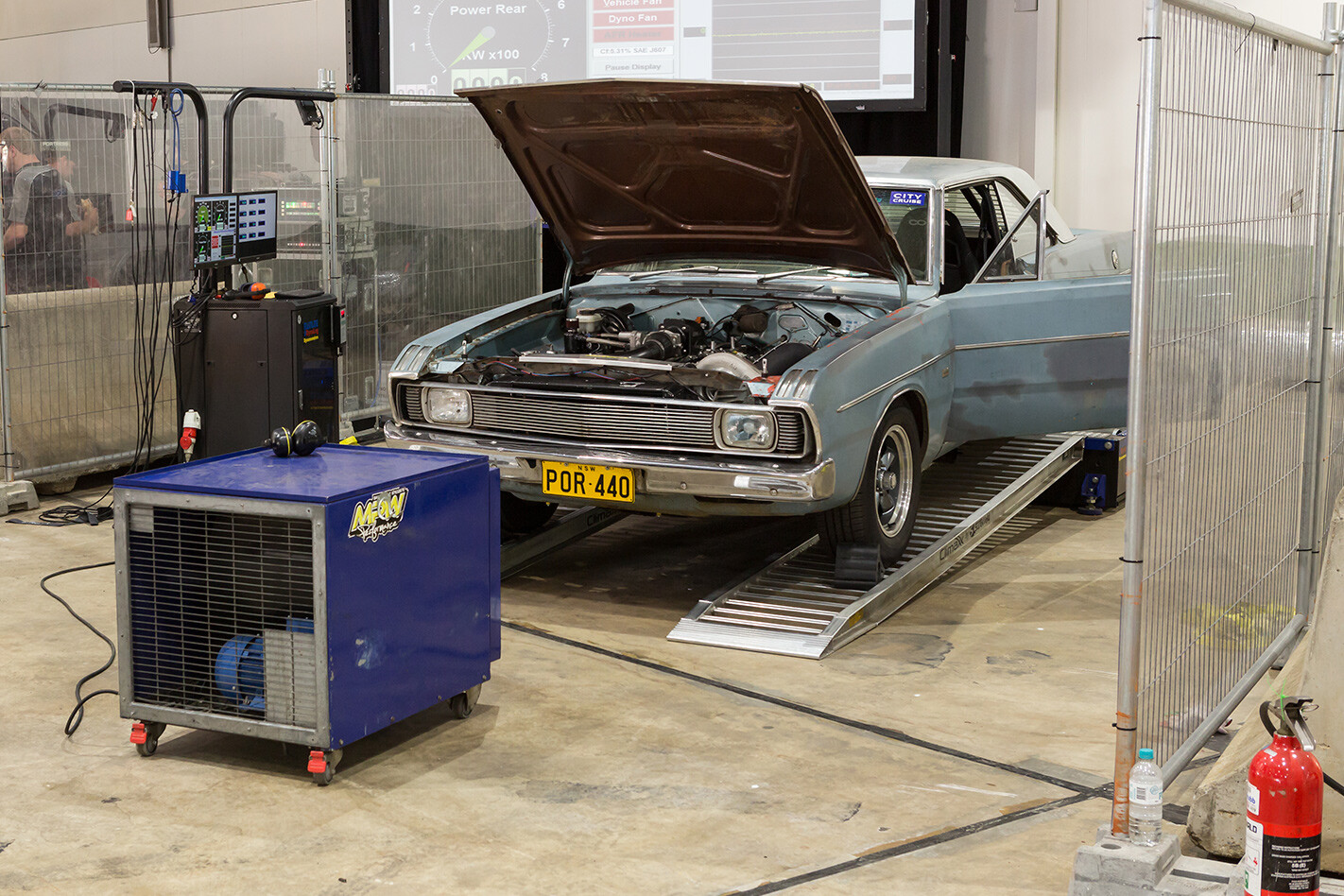 Arby’s POR440 rocks a junkyard 5.3-litre LS truck motor inflated by a turbo that looks big enough to have been nicked off a tank. While he is most famous for rocking Horsepower Heroes with his big-dollar blown Chrysler big-block WAR440 Valiant, the stock bottom-end LS build cranked out 725.5hp at 25psi in Qualifying, falling short of a finals berth by 30rwhp 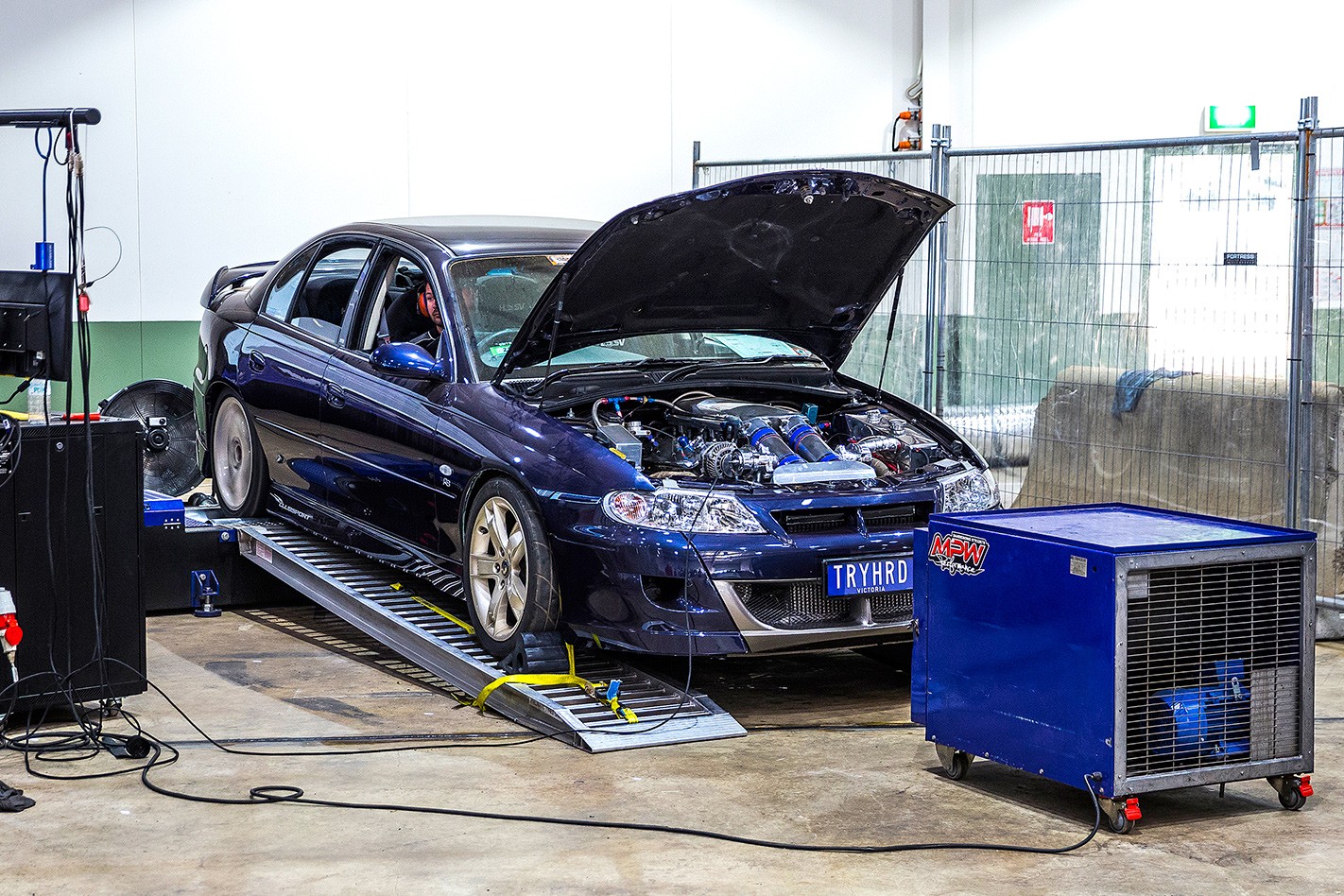 TRYHRD had all the goods to challenge Jake Edwards’s Torry this year, with a 440cui Dart block, Higgins CNC-ported heads, Autronic ECU and twin turbos blowing through an air-to-air intercooler. Running a Tremec T56 six-speed manual, the HPF-tuned monster now runs E85 but didn’t show what it could do as a leaking blow-off valve limited boost to 15psi instead of its usual 40psi 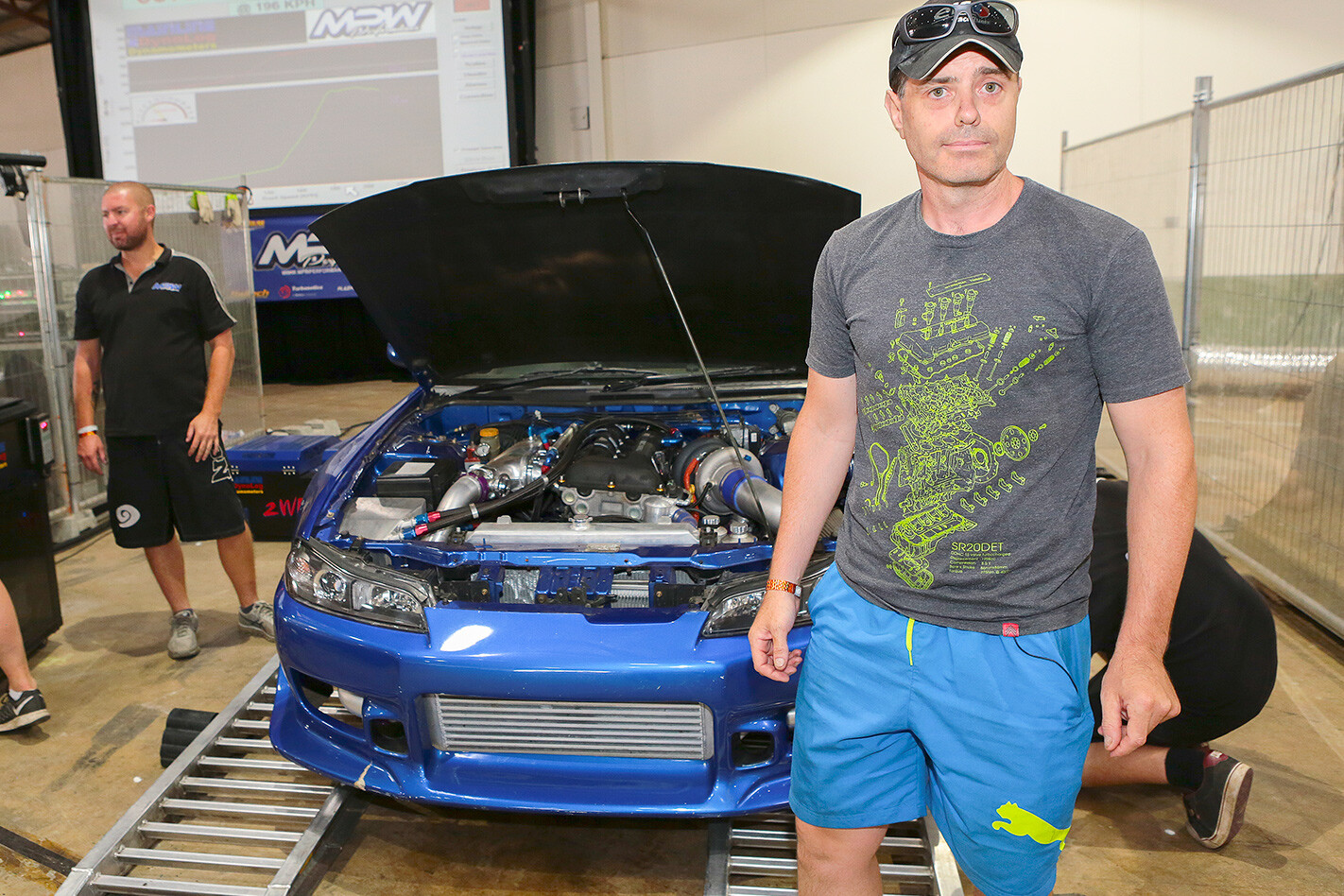 Kris Sheatuer’s Nissan 200SX four-banger set-up is seriously stout, and showed up many bigger set-ups on Sunday. He was 156hp ahead of the second-placed entrant in the Forced-Induction Four-pot class! The SR20DET turbo four slammed down 657hp thanks to a Japanese JUN 2.2-litre stroker bottom end, BorgWarner EFR 9174 turbo running 36psi and E85 boost juice. “I built it for circuit and a bit of drag work, and it makes enough power to do nines,” said Kris A genuine dyno legend who has owned the NA six-pot class at Summernats, Tony Spasenoski brought his VH Charger back and was in a class of his own – literally! The only other finalist, Rob Thorpe, withdrew to head home early 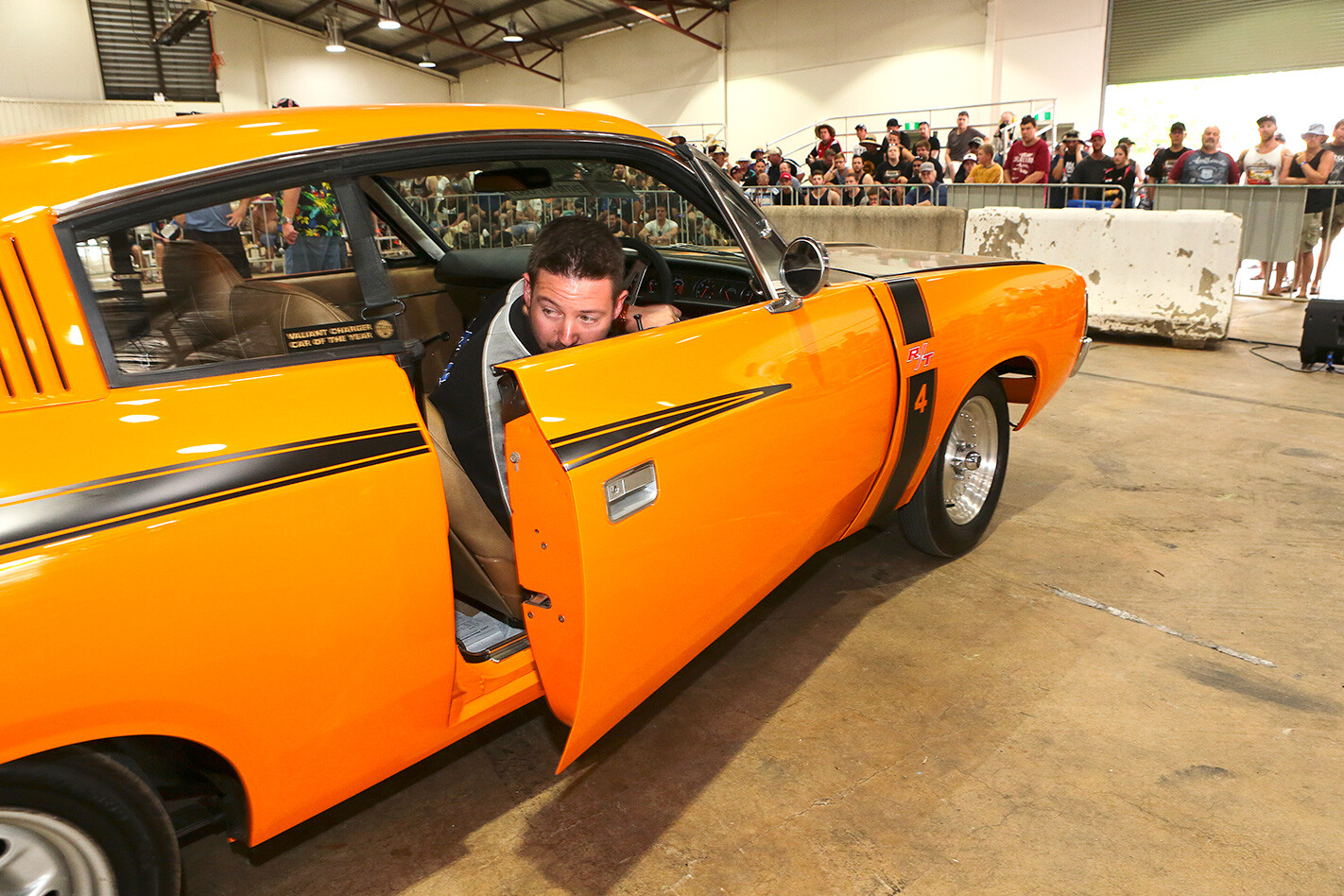 The car’s 265cui Hemi six is a tough piece of gear. With the 4.3-litre in-line donk seeing some fresh work by Mirabito Performance, Tony qualified with a touch over 300hp. He took the win on Sunday with 295hp in hot conditions 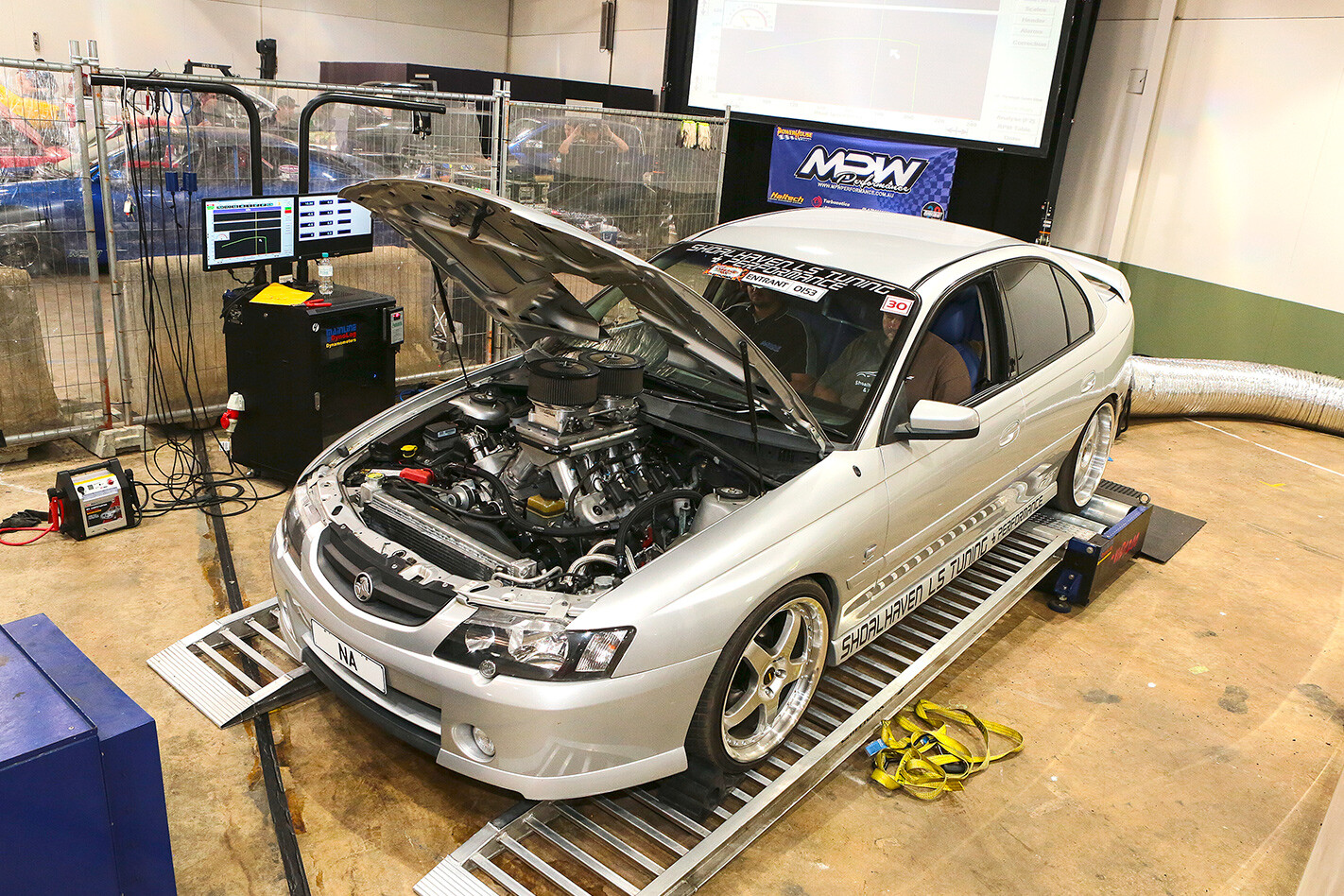 King of the aspirated V8s for two years in a row, Bobby Brown’s sleeper VY SS stomped out 100hp more than his closest competition, Karly Van’s 632cui One Tonner. Bobby’s Commo has a 482cui tall-deck LSX with a big solid roller cam, pushing out 661hp 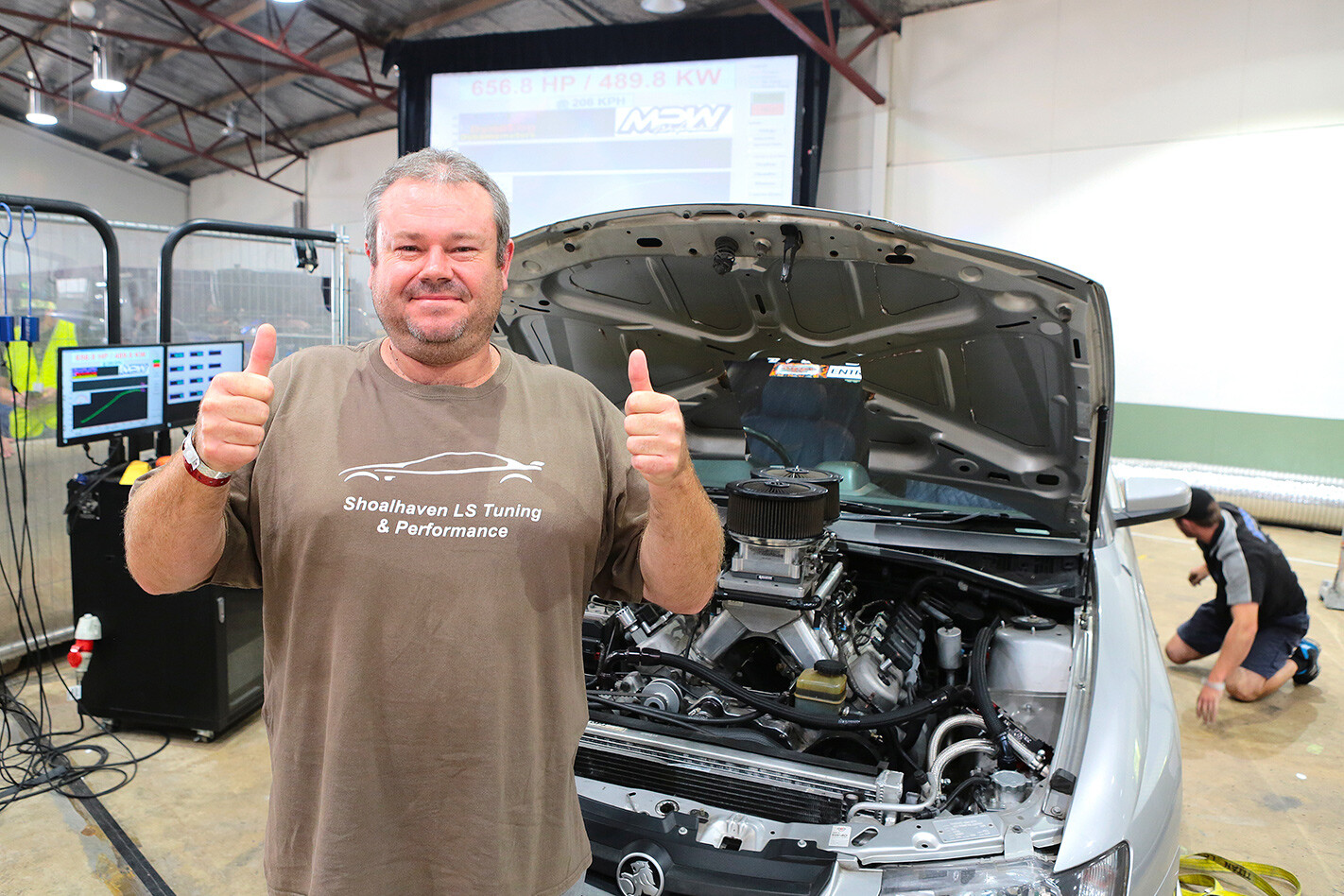 Bobby ran a 9.9sec in the full-weight 1680kg Commodore at WSID recently 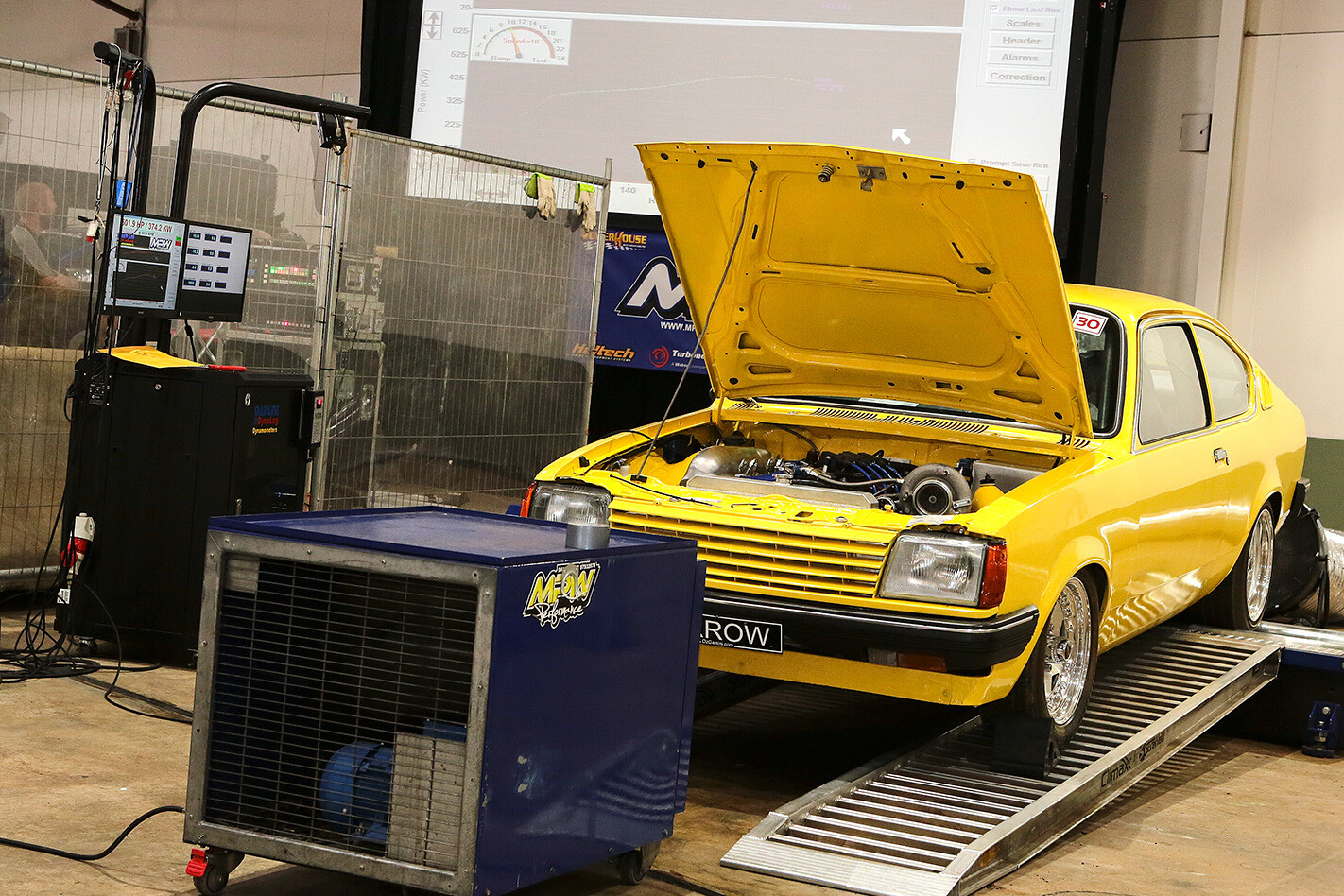 Scott Forrester’s ARROW Gemini was back in 2017 but didn’t get near its PB of over 800rwhp thanks to a change of focus for the car, recording a best of 501hp. “It still runs methanol but now it has a Trimatic auto and 7000rpm stally as I’m looking to take it drag racing this year,” explained Scott. “I also ran over 50psi with the manual ’box but I am down to 40psi to save the Trimatic. I don’t want to blow it up before I get a chance to do Street Machine Drag Challenge this year!" Todd Jackson’s super-clean Datsun 1600 is a monster with a vintage piece of Nissan hardware in the engine bay – an old-school turbo FJ20 four-pot! A genuine street car, Todd reckons he’s gone through countless diffs, transmissions and clutches, not to mention tyres. Adam Rogash was seriously impressed with how hard the Datto came on boost, commenting, “It’s the strongest car as it ramps up; it hits hard!” Todd’s gold rocket finished third in FI 4-Cylinder with 448hp 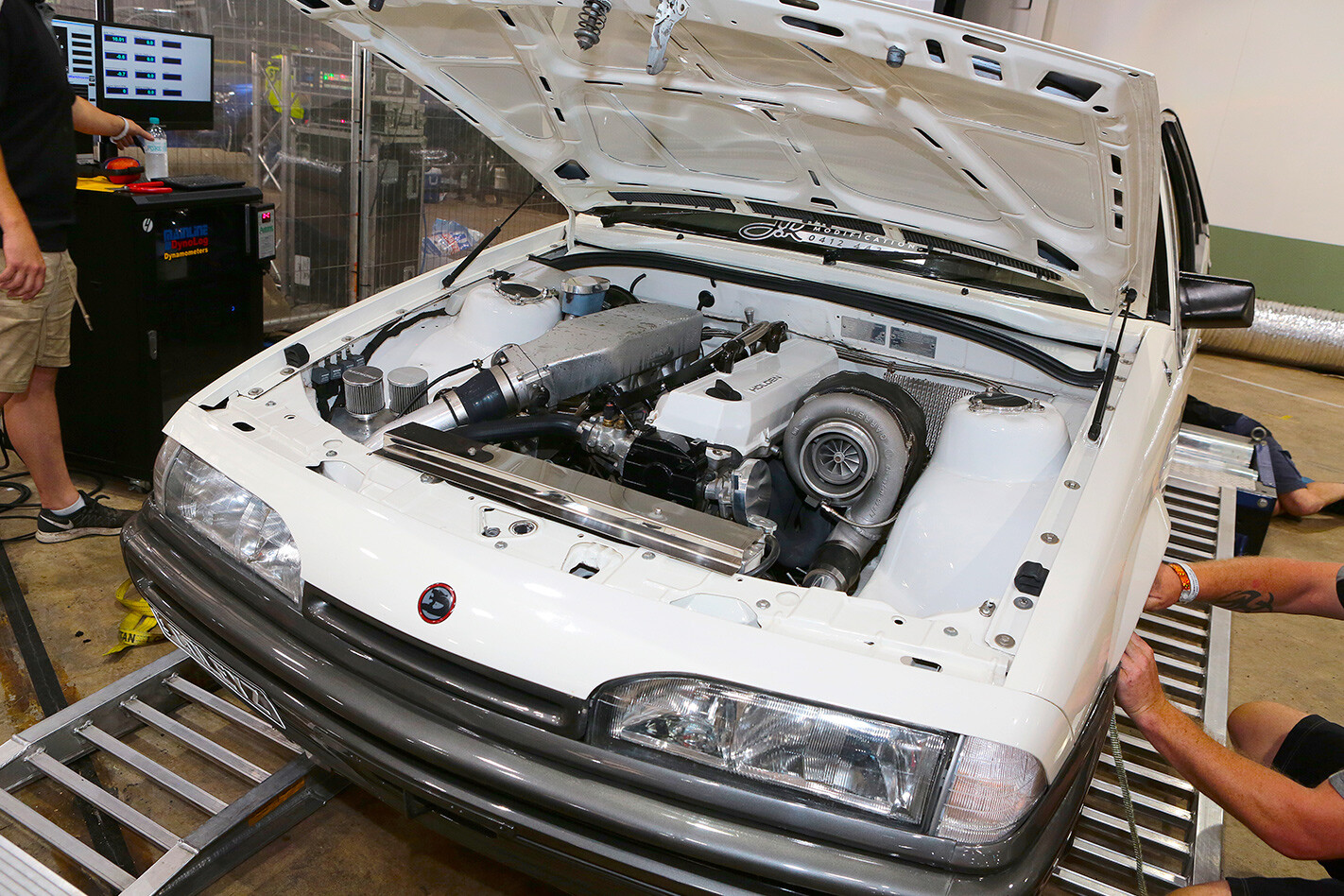 Shaun “Hollywood” Cole took out the Forced Induction 6-Cylinder class over Gina Harrison’s FG XR6T, with 570hp against 511hp. The VL SL packs a serious E85-guzzling RB30ET with a JD Custom intake plenum, 2200cc injectors and a Garrett GTX42 that Shaun reckons is out of puff 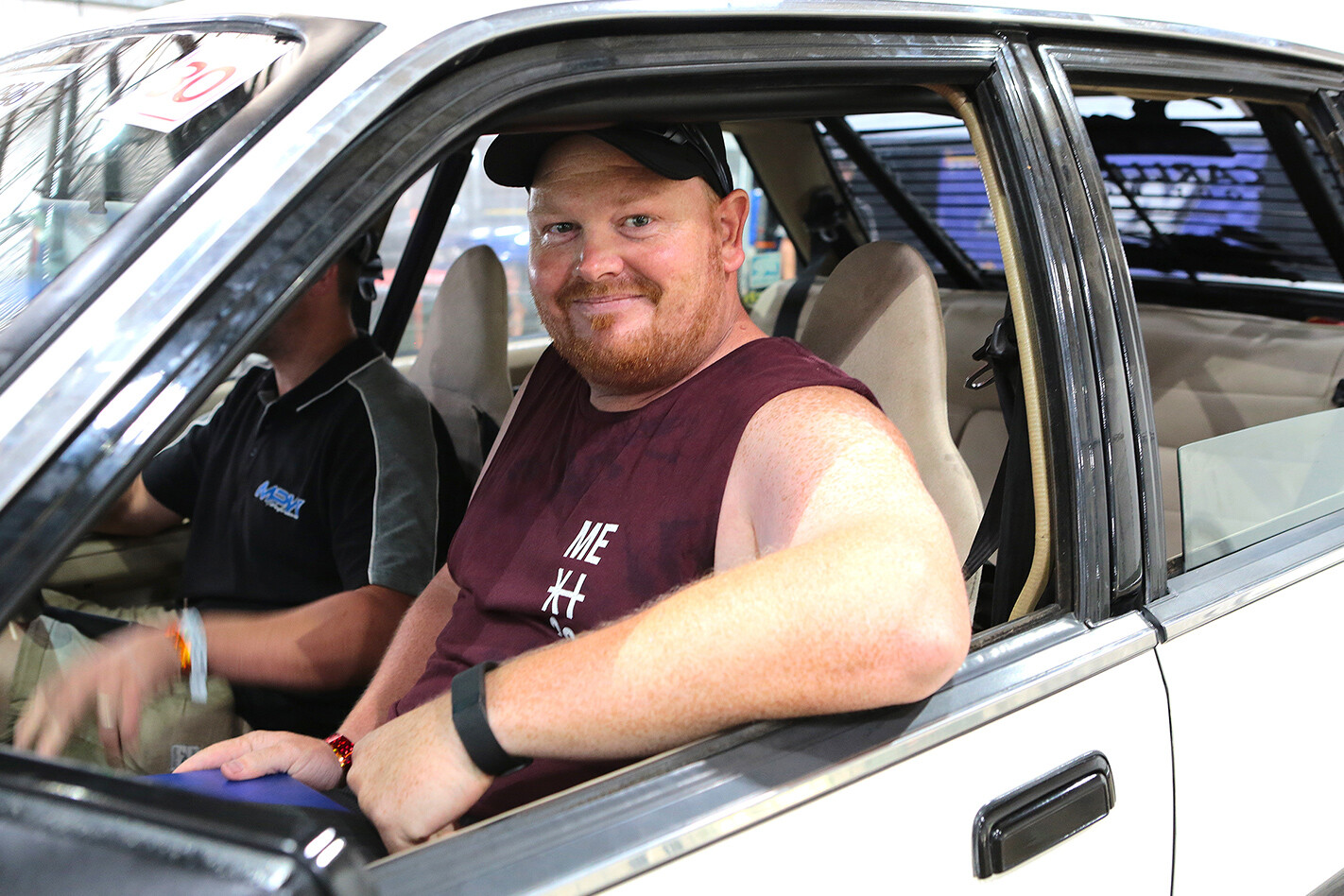 “We could make a heap more power with a bigger turbo but that will hurt how the car drives on the street,” he explained. “We’re going to look at maybe modifying the exhaust housing as that is where the restriction really is.” 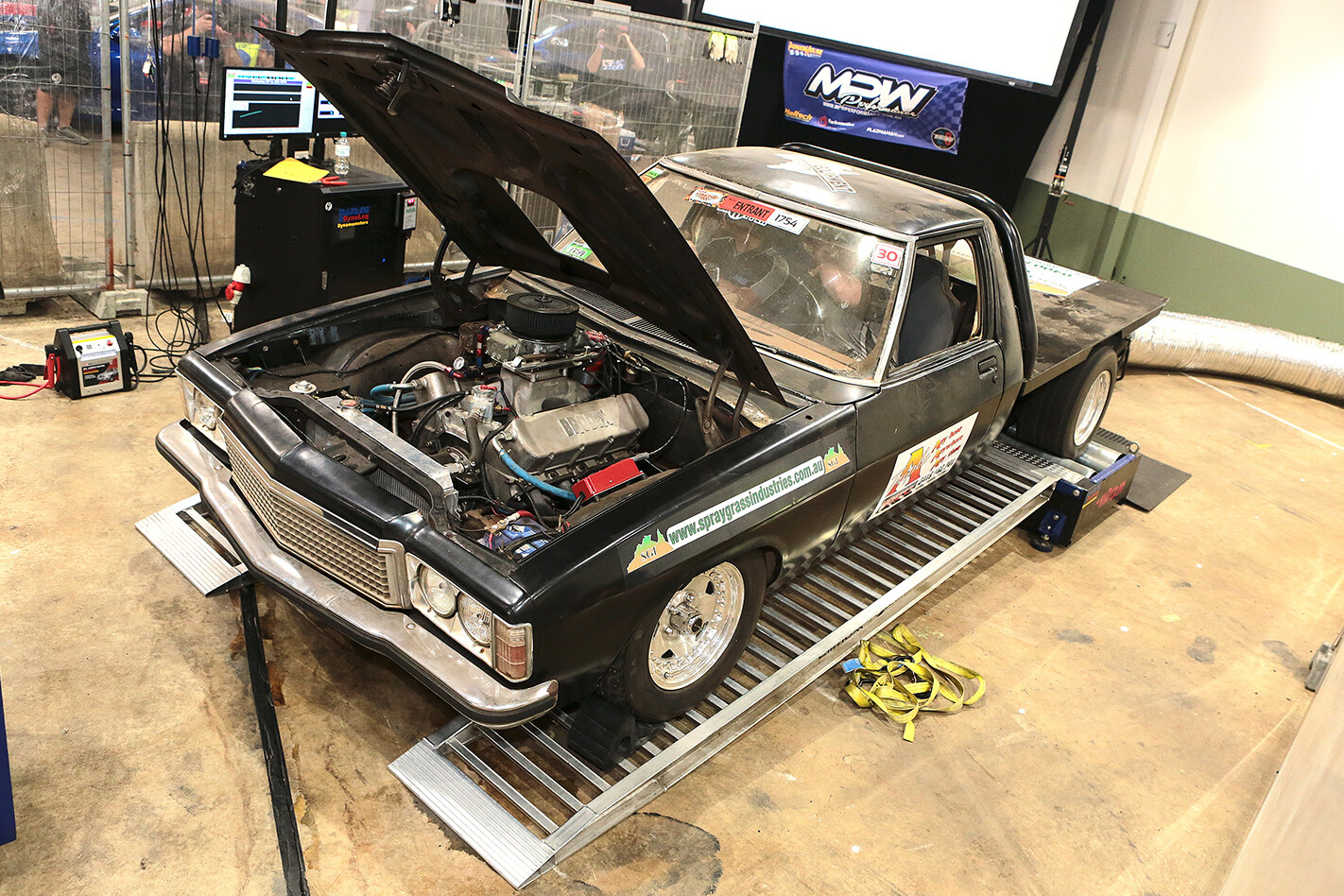 Des “Mitch” Mitchell’s straight-piped One Tonner was definitely the loudest car in the dyno cell all weekend. Mitch and his mates from Humpty Doo in the Northern Territory dragged a few cars down for their first ’Nats experience, with Mitch’s ’Tonner performing strongly in the burnouts. Spanning 582cui, it has a Dart block, Brodix heads and a soft tune, the ignition timing set at only 30 degrees to better ensure survival on the burnout pad 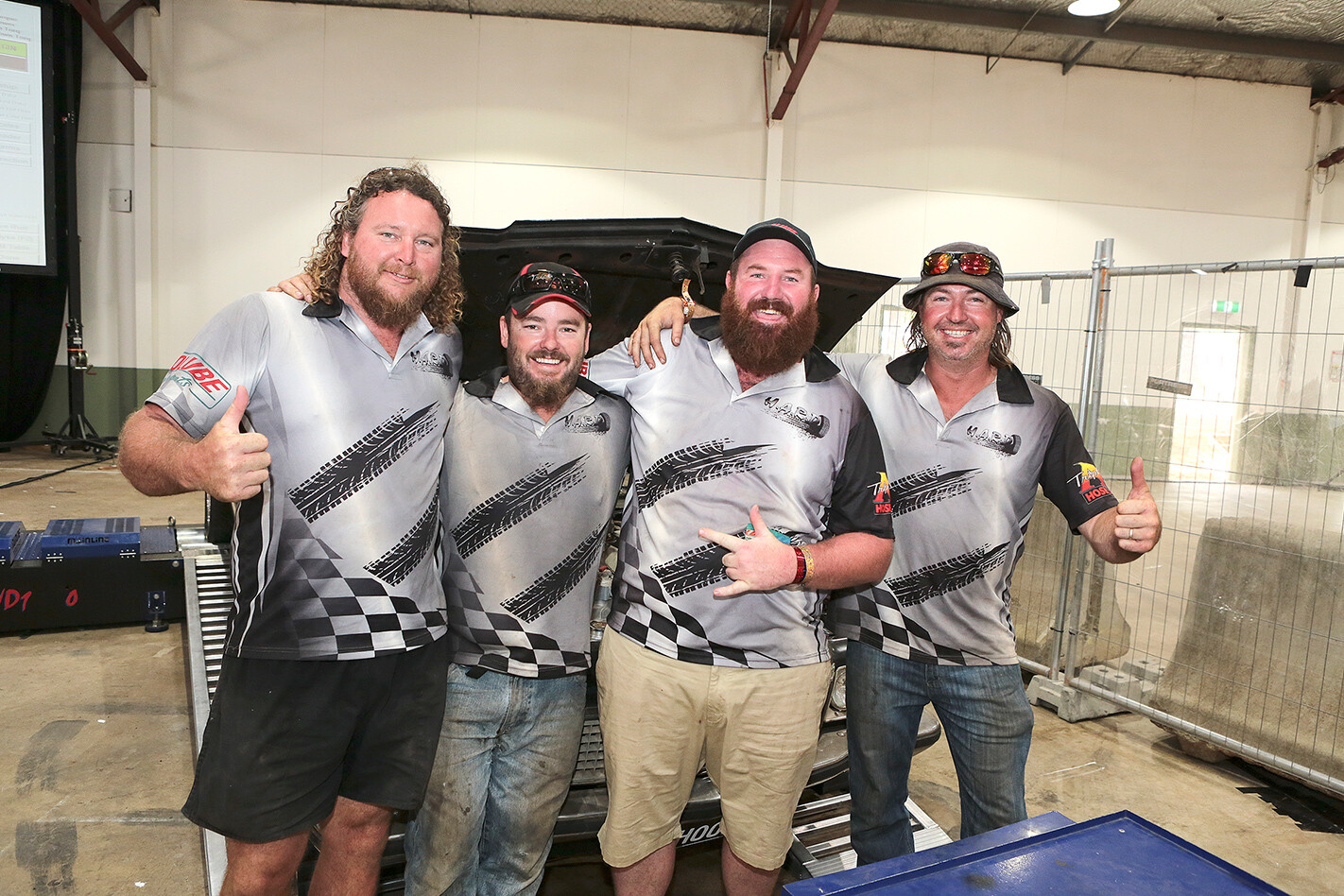 Still, the meth-sucking big-block churned out 505hp at the treads to end up a close third in the NA 8-C class

Here's three sweet cars we saw in the dyno hall worth an extra look: ACT local Chris was one of a few punters chucking a sixth-generation S550 Mustang on the MPW dyno over the Summernats weekend, but this little red rocket had a bit extra in the engine bay.

“It is the first Australian twin-turbo kit for these new Mustangs,” said Chris. “It was built by ESP in Canberra over eight months, as the American kits are all rubbish and are terrible quality. We use custom headers and twin GTX3582 Garrett turbos, with a front-mounted air-to-air intercooler and HPTuners software in the stock computer. The only problem we’ve had was a seized fan relay that melted some wiring.”

The whisper-quiet Mustang belted out 558hp at the treads, a nice figure given the car’s stock bottom-end! 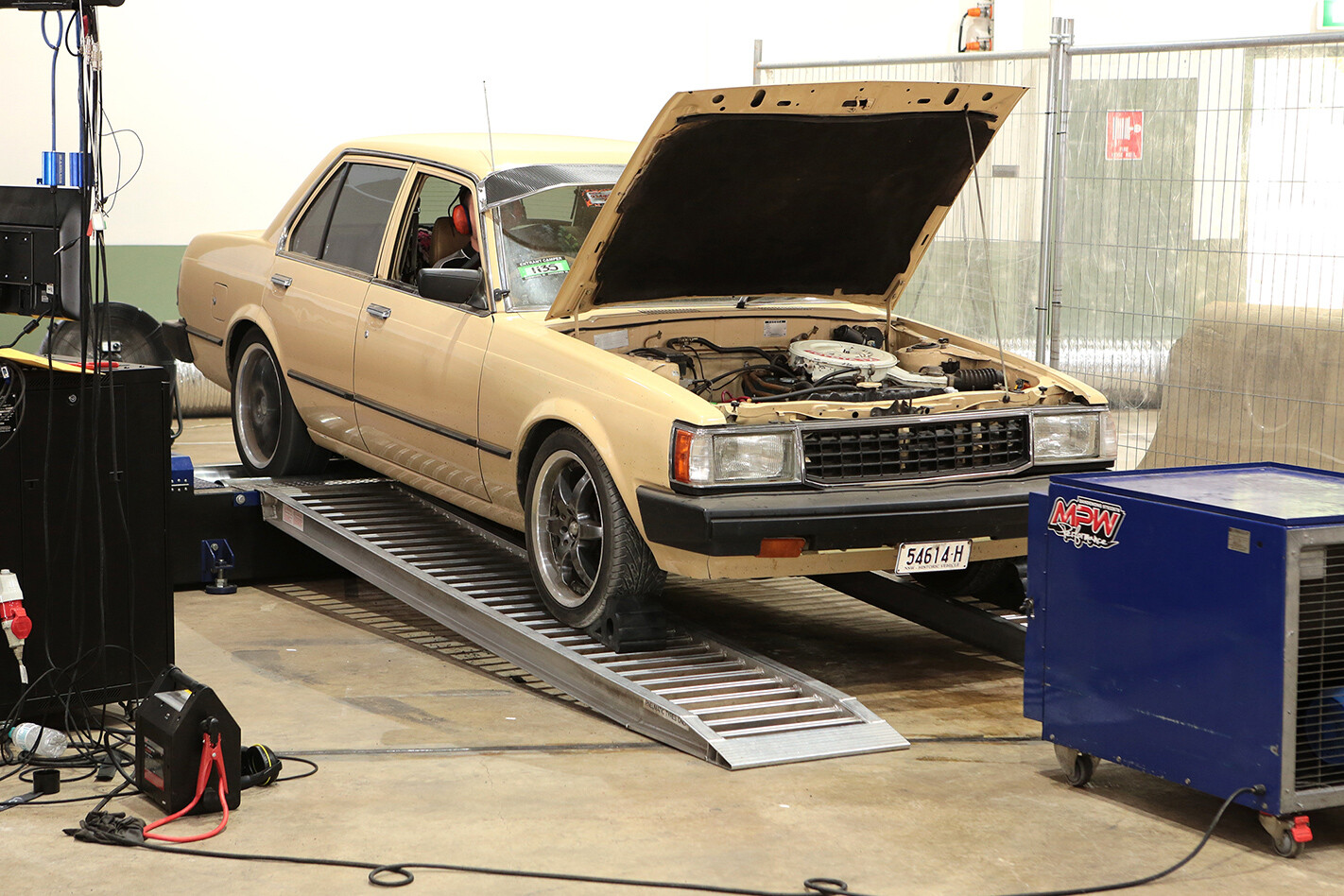 Simon wasn’t planning on bringing his very cool cruiser into the dyno, but he was laughing by Sunday morning as he ended up second overall for highest horsepower NA four-cylinder.

“I brought my HQ to Summernats but the LS in that is playing up so I just ran the Toyota,” he laughed. Once Simon saw the old four-banger wheeze out 129hp, he was astounded.

“That’s not right! These things run a Holden Starfire four-banger which makes about 55hp so I must have a magic motor. I’ve had it about two years, but I got it off a mate who got it off his grandma. The wheels and crochet rug on the back is about all the custom mods I’ve done to it, but I’d love to put a turbo Toyota 3RZ-FE in there!” 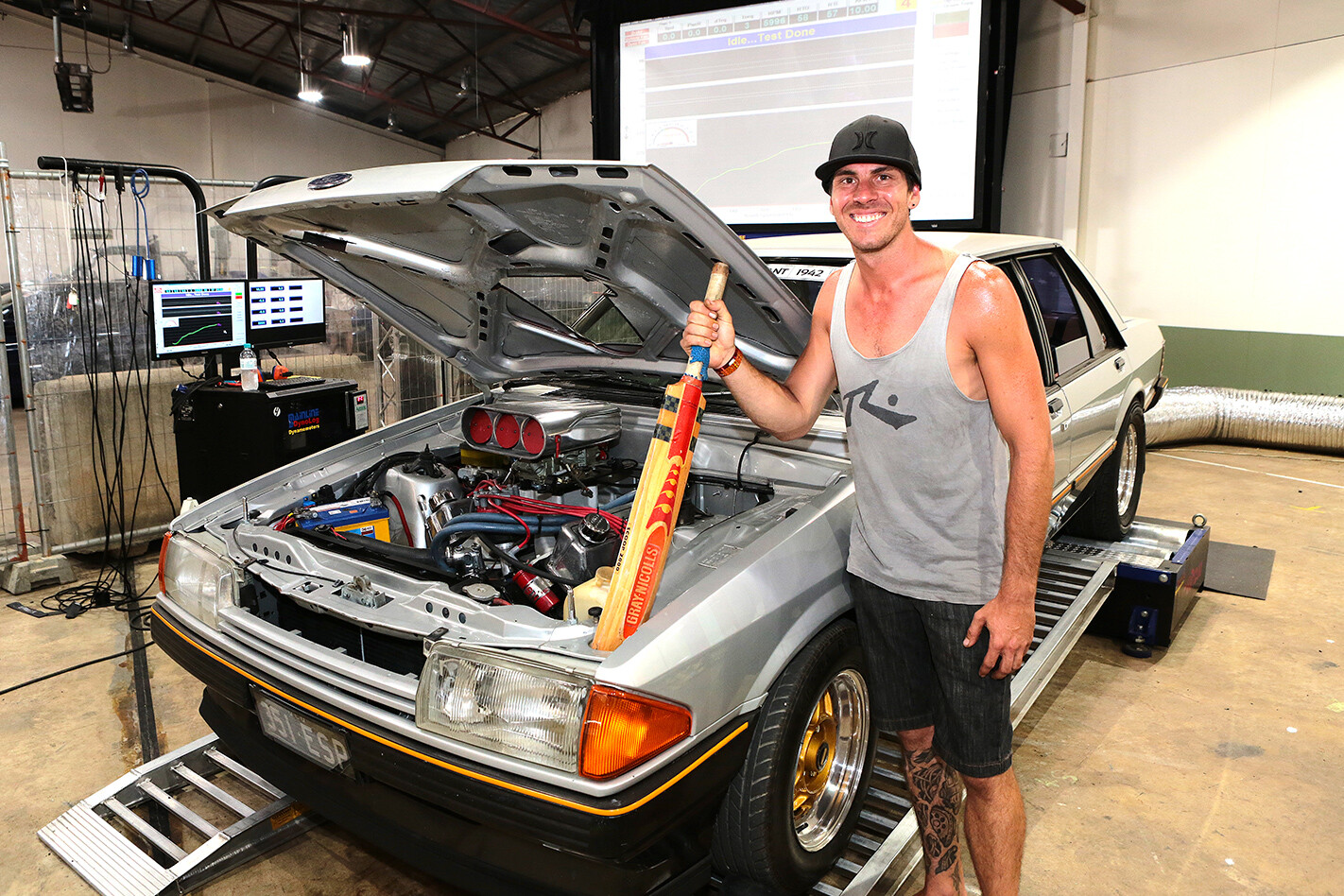 Unloved for many years, the mighty European Sport Pack Fairmonts are shooting up in value as collectors realise just how cool the last of Ford’s local 351 cars are.

“I bought this car when I was 19 for $2500 pretty much as it sits now,” said Nate. “My parents weren’t happy that I had to borrow the money because I was a first-year apprentice.”

It has done under 200,000km from new and is a real-deal 351cui four-speed manual ESP. It’s had cam, intake, extractors and carb upgraded but Nate has all the original parts to put back on it as well, even a mint bonnet!

“I had to leave it in a chook shed in Grafton for a while just so I could hang onto it when I was working away in the mines and had nowhere to keep it at home,” he said.