Every year the SM team fabricates some awards for the Summernats cult heroes that steal our hearts. And when we say "fabricate", we don't mean we actually make a physical reward or trophy that exists in the real world. Just that we make up some categories that allow us to give pats on the back to a few of the outsiders who have excelled - the wild and weird ones, the underground sensations, and other offbeat and off-tap jalopies that help to give Summernats its flavour. 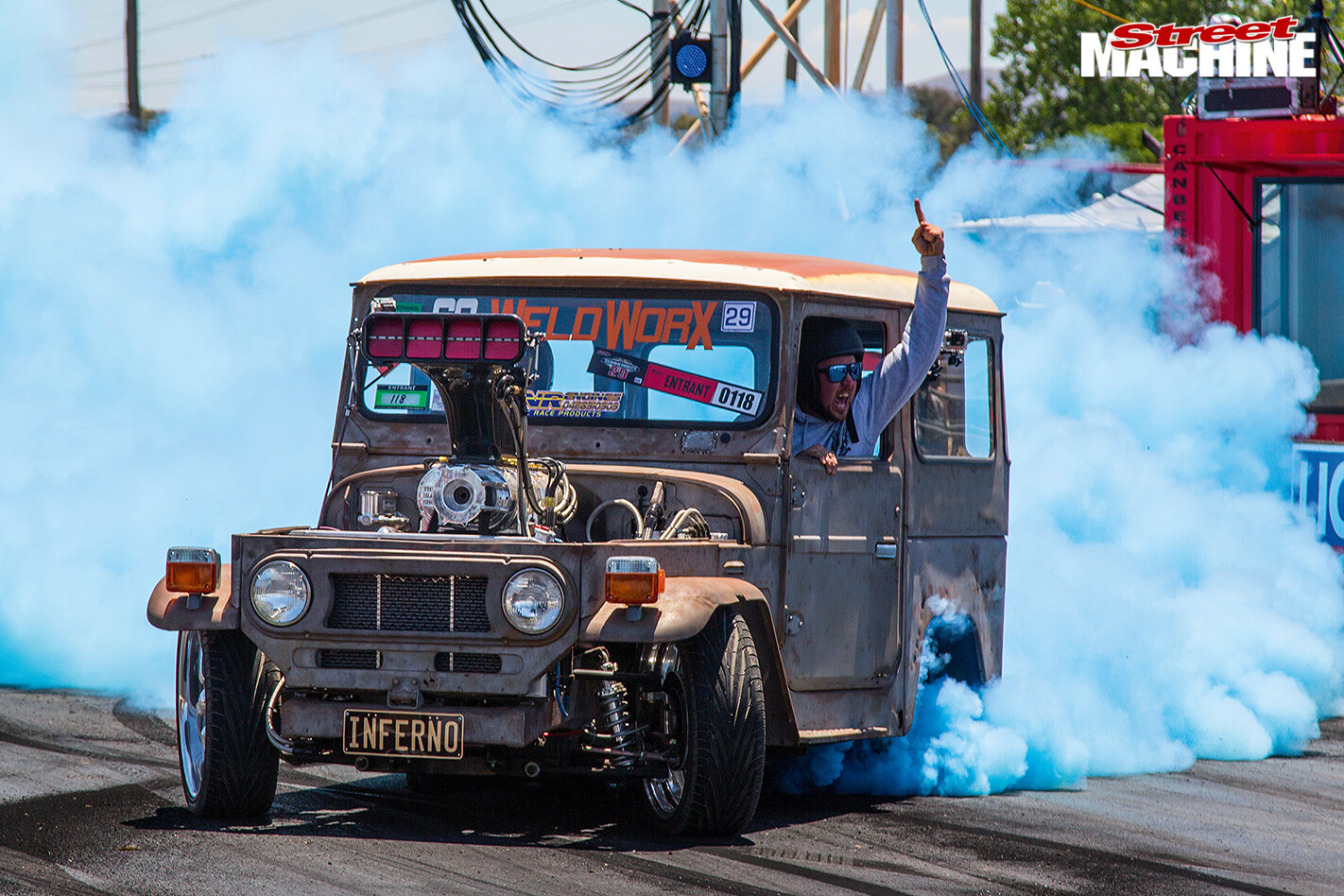 It seems like Tom Beltrame has just dragged an old LandCruiser out of a paddock and shoved the biggest engine he could find into it. And that is pretty much what he did. But there’s a lot more to this beastie than meets the eye.

With a BNR Engines 510ci big-block Chev taking up most of the real estate up front., there’s an 8/71 TBS blower on top with a carbon hat. It pumps out 1280hp at the crank, so there’s more than enough power to turn the tyres on the stripped-bare ’Cruiser. It’s backed up by an API Powerglide that can handle 2000hp and the nine-inch out back is filled with Strange centre, full-spool and 35-spline axles. What isn’t so obvious is the amount of work that’s gone into the rest of the car. Up front there’s an IFS from Castlemaine Rod Shop that’s been welded in to the original chassis, while SA Weldworx sorted out the rear clip and a lot of the other fabrication. Inside it’s all business, with a Racepak dash taking care of the data acquisition along with a trio of gauges to keep an eye on the important things.

There’s a massive 120-litre fuel tank in the rear to keep the engine well fed with methanol, and a couple of race harnesses have been added – and great to see it still has the original split bench seat! 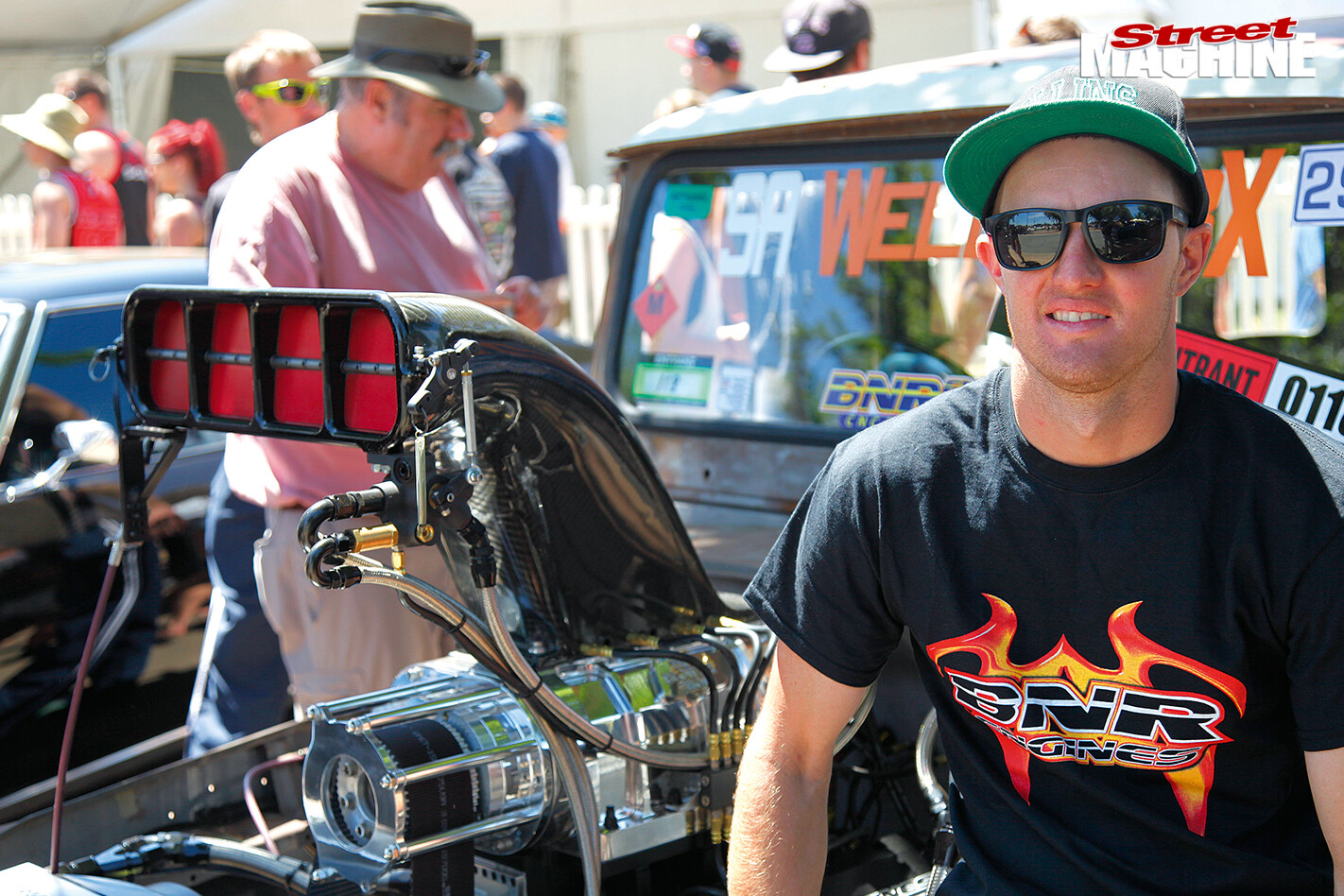 Being the first time out, Tom did have a small drama at the burnout pad and didn’t make it to the Finals.

“I had a bit of a tyre fire, so the fireys came out,” he lamented. “It didn’t click back into gear properly and when I put my foot into it — because it’s a 1200hp engine — it banged up on the limiter really quick and popped the burst panel. I was really disappointed I didn’t make the Finals.” 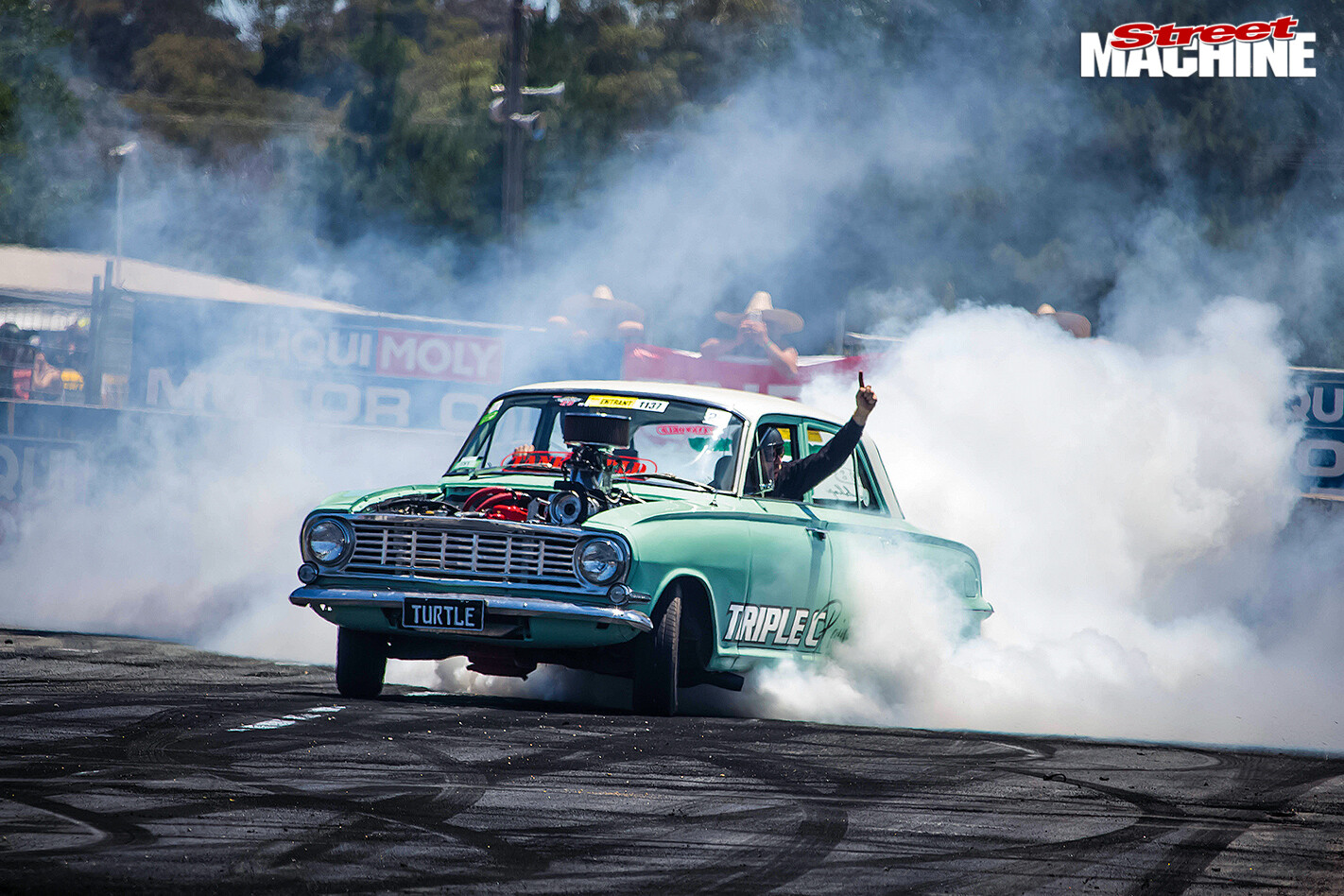 There are a number of ways to stand out in a crowd. But when the majority of that crowd are brightly painted, mega-cube, high-horsepower street machines — then it’s not a bad idea to head in the opposite direction.

Turning a 1963 Vauxhall Victor into a burnout car seems crazy enough, but when you discover it’s powered by a supercharged four-cylinder Holden Starfire engine, you just know that the owner is going to be a pretty interesting character, maybe even a bit crazy.

As it turns out, Chris Degering is a pretty normal bloke. He’s ex-Army, runs a business called Tyres2you and is more than happy to share his wealth of knowledge — and trust me, there’s a fair bit required when you’re trying to keep a blown Starfire on methanol alive at 9000rpm. But why a Vauxhall? “I figured there’d never be another Vauxhall Victor or Starfire out there on the burnout pad. I’ve had it for a year now and now it’s on song,” Chris said. Well, it was on song until something let go during Eliminations.

“We broke a rocker arm pedestal. I stopped looking at the tacho during the burnout. When we looked at the tell-tale afterwards, it said 11,000!”

Chris got it fixed to go out in the Finals, replacing the ported and polished head with a stocker, but things didn’t go too well and it dropped a cylinder. 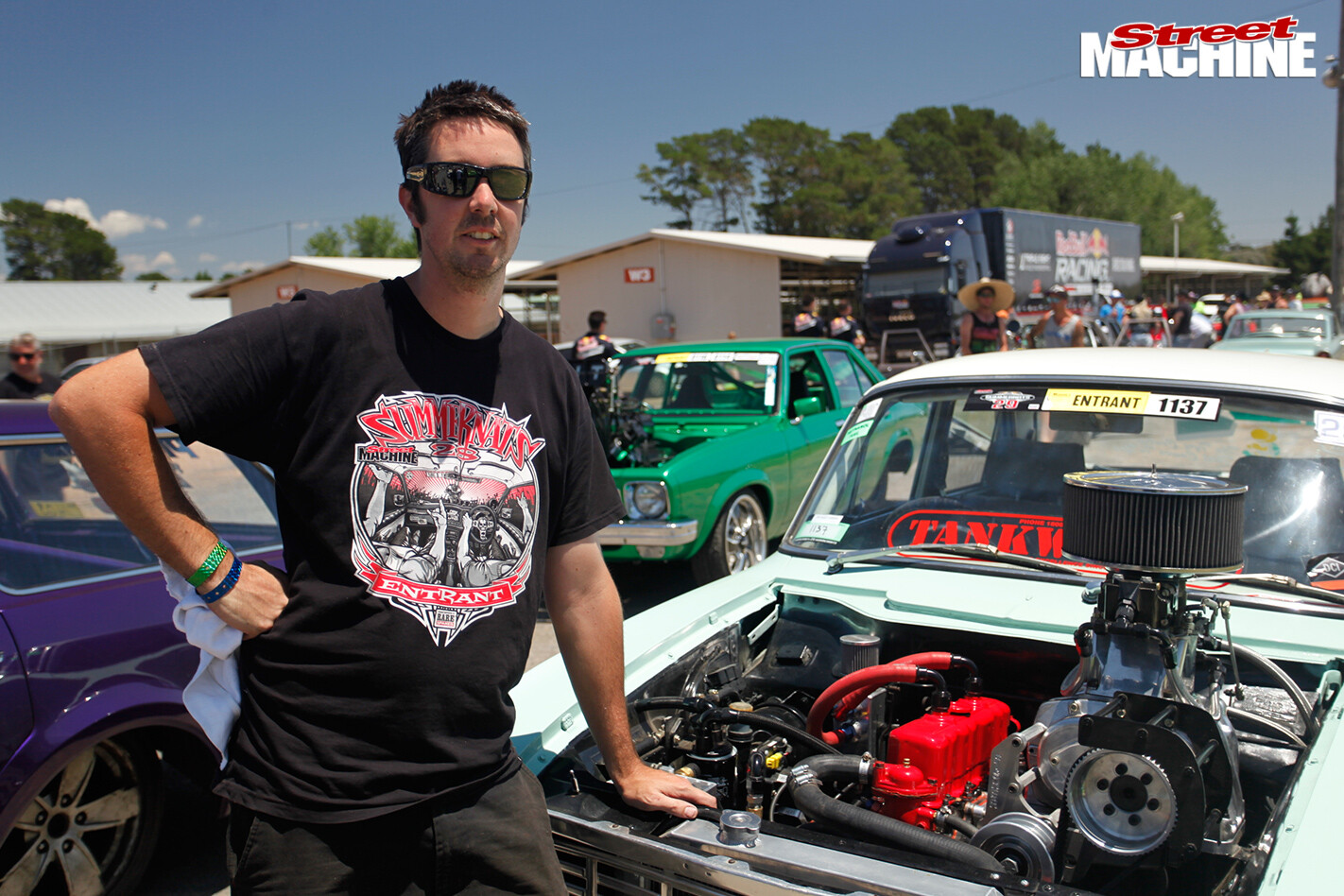 “We’ve learnt the hard and costly way, but we’ve got all the kinks ironed out now,” Chris said. “The piston that let go was cast but I’ll get some JE forged pistons now.”

The standard bore is the same as a 173, but it’s been punched out to 40-thou over 186. In metric, that means it’s gone from 1.9 to 2.05 litres, but Chris plans to do an offset grind on the crank go squeeze it out to a 2.1-litre. It might not sound like much, but in percentage terms, it’s a pretty big jump. The old combo made 220hp and 500ft-lb at the wheels. That’s almost 2hp per cubic inch. Maybe this guy’s not so crazy after all! Brad Denning and his Team Bin Racin’ rig used to bring the noise in the Hi-Performance Esky Competition at Summernats. It’s no longer part of the official program at Summernats, and last year Brad’s ever-expanding contraption was beginning to fall foul of the powers that be. 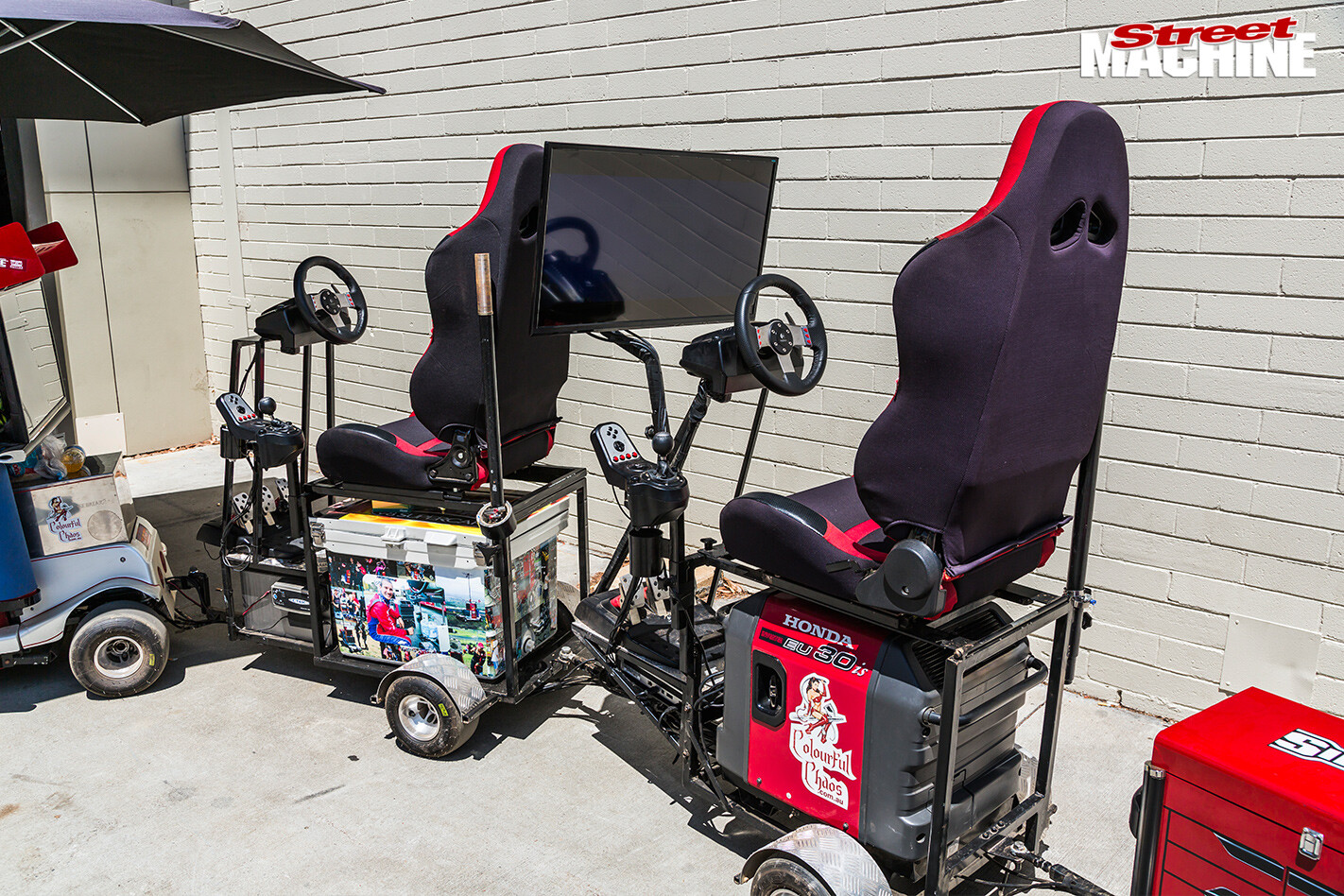 “Security started to give me some grief about cruising around,” said Brad. “The organisers said motorised eskies were no longer allowed, but they liked what I had. In the end they said the only way I could bring it in was to enter it. So here we were, lined up for scruitineering next to all these blown cars with an 8.5 metre-long motorised esky!” 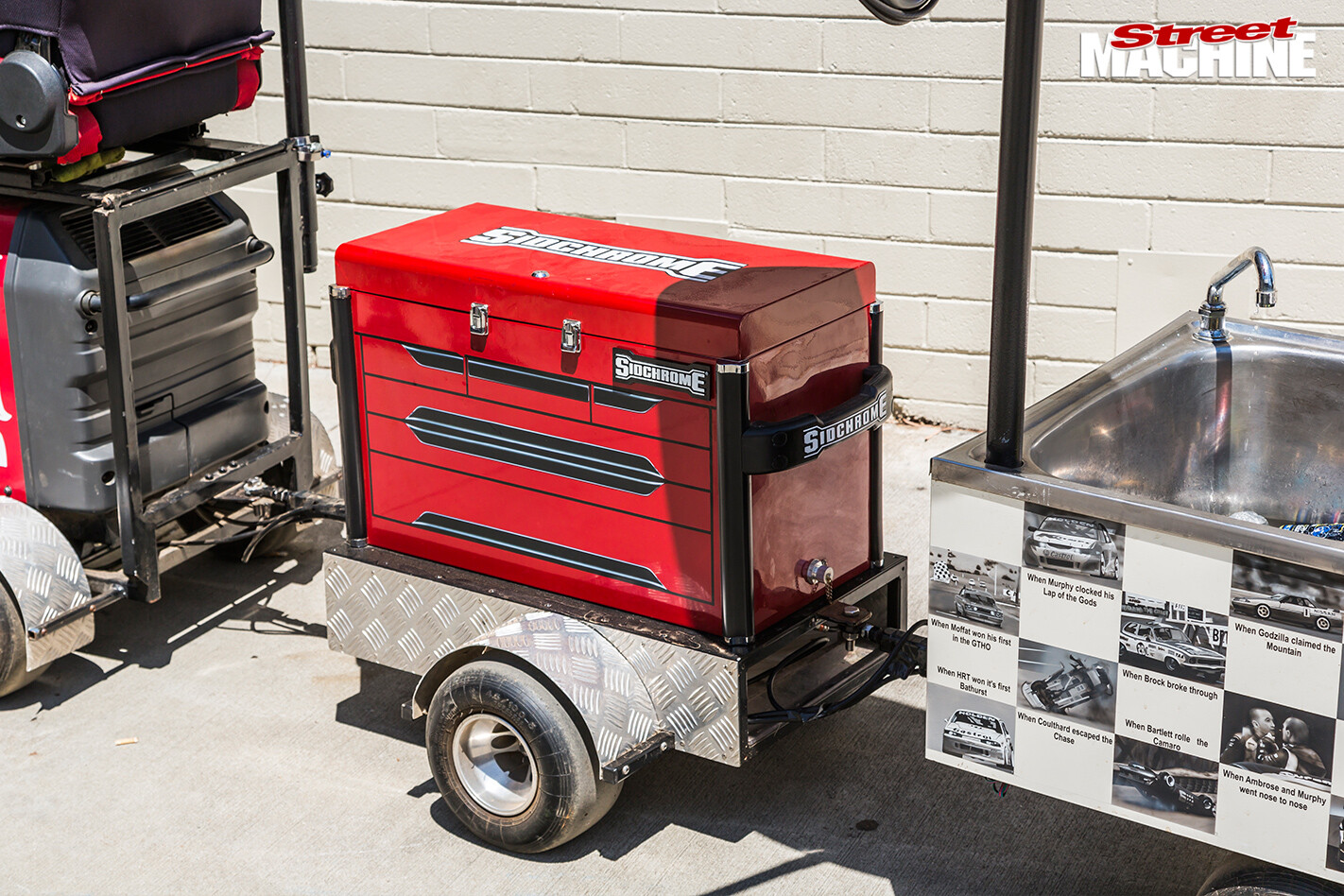 Originally based off a wheelie bin (hence the name), the Team Bin Racin’ chariot literally has everything, including the kitchen sink. We’ll take a deep breath and run you through the features. It runs a stretched mobility scooter chassis and a whole bunch of trailers to which are fitted a 40-inch LCD, 20-inch LCD and two 32-inch screens; a Foxtel satellite so Brad can watch V8 Supercar coverage from trackside; dual racing simulators with G27 Logitech steering wheels; a PlayStation 3; an infra-red camera; a remote-control smoke machine; two CO2 canisters connected to ‘nitrous purgers’, a bar fridge; a 60-litre esky with dry ice for frozen food; a Sidchrome toolbox, which is actually another esky; a Webber Q with an electric spit and Peter Brock-airbrushed gas bottle; and a sink with remote-control pumps. It’s all powered by twin 12V deep cell batteries with a C-tek charger and a 3KVA Honda generator, and Brad reckons it owes him somewhere between $25,000 and $30,000.

“I’m a single dad and it’s something my son, Zac, and I enjoy doing together,” said Brad. “We get support from a lot of great sponsors, and people at shows really enjoy it.” You're not seeing things. This very plain-looking Honda Civic has undergone some serious metal mastery to now rock a rear-drive turbocharged four-cylinder drivetrain out of a late model Nissan 200SX! Confusing punters everywhere, it is such a sleeper it almost didn’t get through scrutineering as the officials thought Dan and his mates were having a laugh and had entered nanna’s shopping trolley!

The boys took an S15-series 200SX Nissan coupe and cut the firewall, cradles and strut towers out to fit underneath the Civic. They fitted it into the gaping holes under the Honda where the wrong-wheel-drive, naturally aspirated 1.5-litre stuff was, then whacked in the Nissan’s turbo rear-drive four-cylinder SR20DET engine, six-speed manual and rear-end.

“We can hit The Chase at Bathurst top of fifth gear and it just hooks in,” said Daniel. “We actually had to extend the tailshaft as the Honda’s wheelbase is longer than the Nissan’s, but the lack of overhang at each end means it turns so, so well.

“It gets driven in a few events each year, plus we also take it down to the shops! Last year I was coming down to Summernats and it did the head gasket, seizing the engine in Goulburn. We got it going again and still competed, but it was a bit of drama.

“This year I broke a rocker arm on the way down on Thursday, and since then I’ve broken four more rocker arms! Now all the shims have disappeared from the head, but I’m still having fun!”