WHETHER you are into muscle cars, hot rods, Japanese cars or late-model stuff, there is always bulk eye candy to enjoy during the Street Machine Summernats City Cruise. You might see a Camaro rolling alongside a GT Falcon, followed by a Celica and ’34 Ford roadster cruising side-by-side. 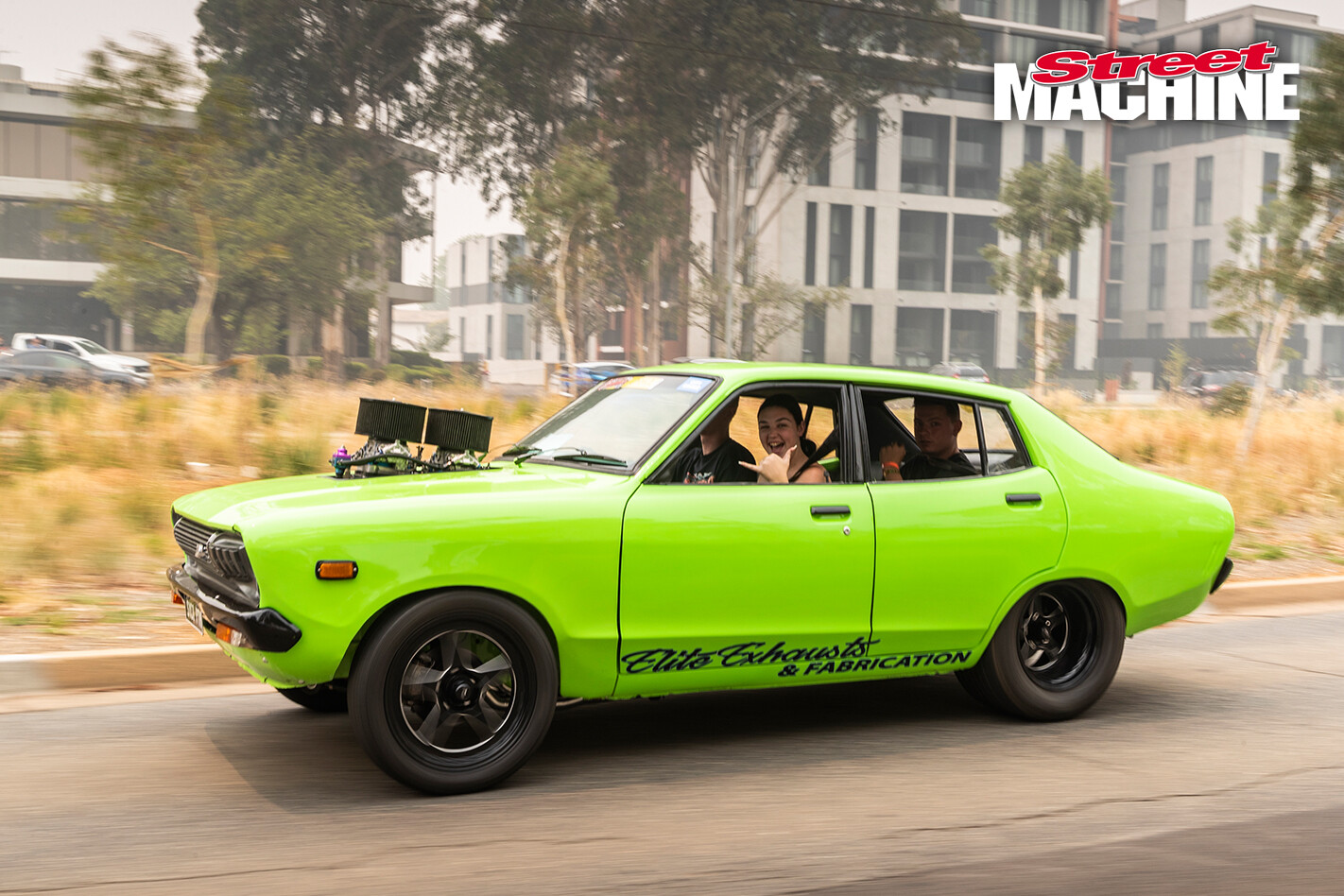 This year’s City Cruise kicked off in a haze of smoke from the bushfires, but everyone was very well behaved as they made their way out of Exhibition Park and down Northbourne Avenue, past thousands of appreciative spectators. With 482 of the country’s nicest and toughest cars in the line-up, there was plenty of entertainment value and variety for the crowds and cruisers to check out. 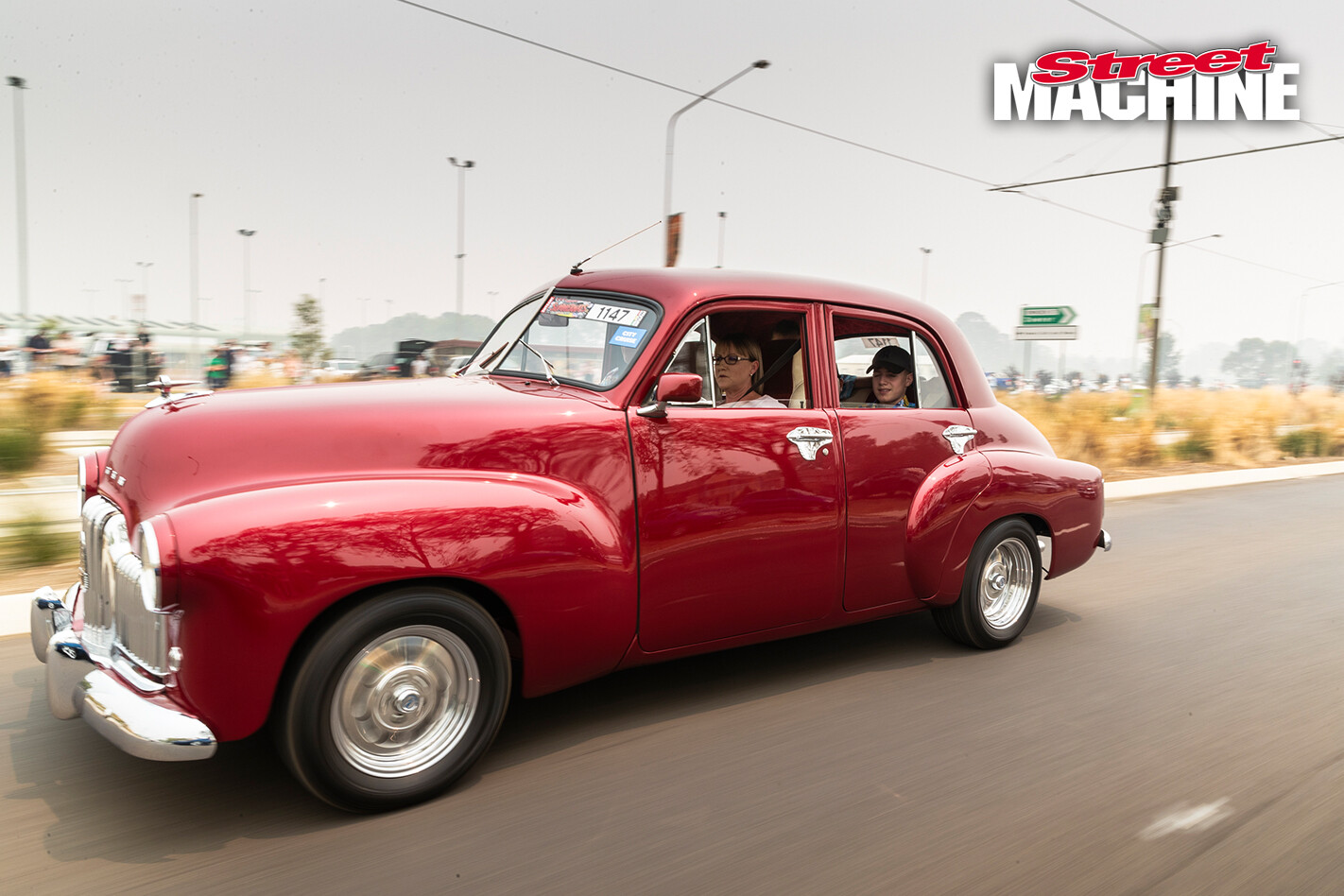 Rob Mac openly admits that his Mk3 Zephyr is heavily influenced by the late John Peterson. In true JP form, it’s got an angry 302 Windsor, but it’s backed by a C4 with a trusty narrowed nine-inch out back to help those meaty 20x12 US Mags fit underneath. 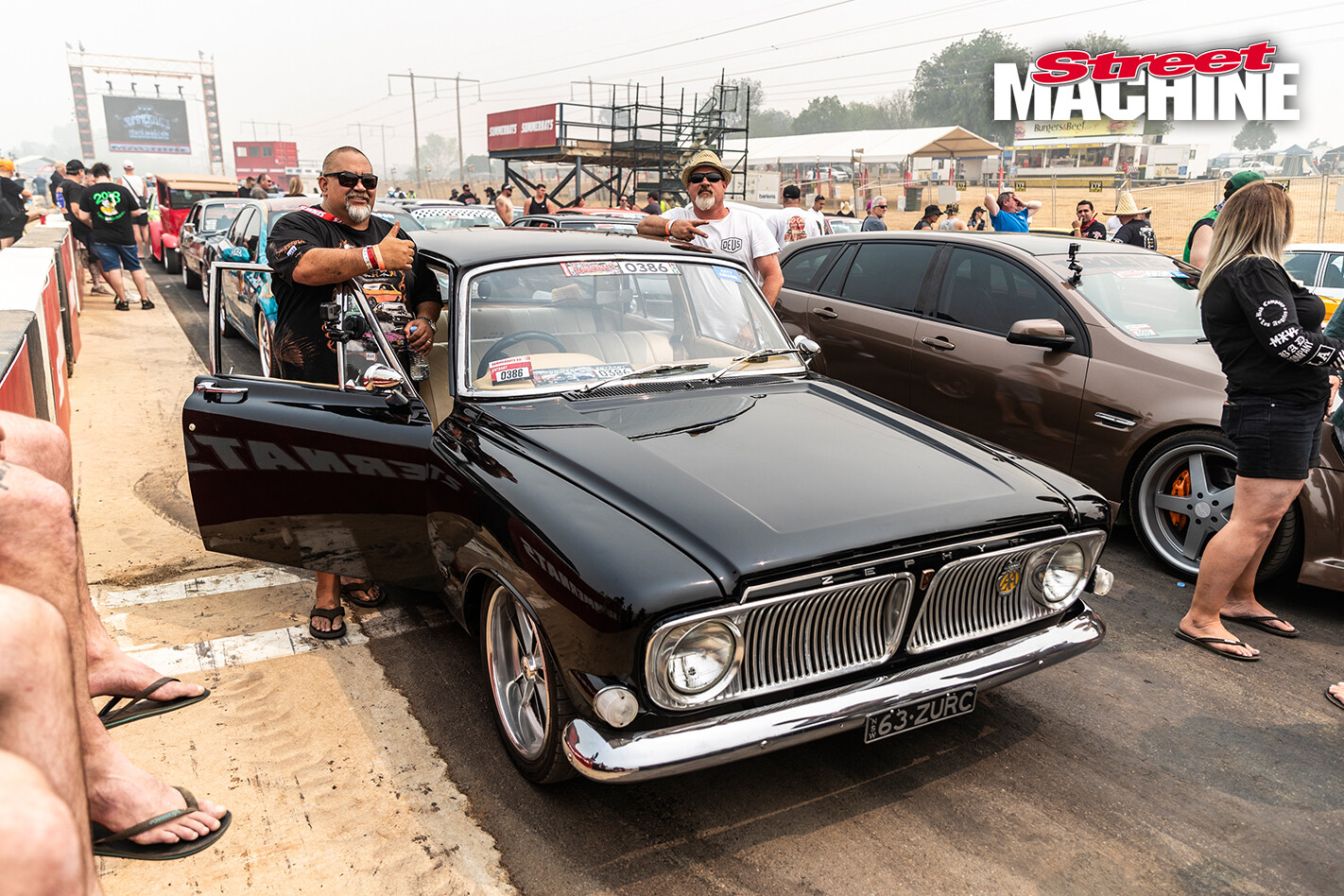 One of the wildest rides at Summernats this year is Craig Hurkett’s ’34 Ford, which features an unusual induction set-up. Four Gas Research carbs provide the LPG to the drawthrough twin-turbo set-up atop the 527ci big-block Ford, which should be good for 1000hp once the 15psi boost goes into it. Chris Psaila’s Datsun 1600 lives up to its 123-GON plates with a 600hp SR20 that’s been stroked out to 2.3 litres. He’s owned it 19 years, but before that it was his uncle’s car from new. Chris says it’s a pretty good little sleeper, but with Morpheus Purple paint and 17-inch G2 wheels, it sure stands out in a crowd! 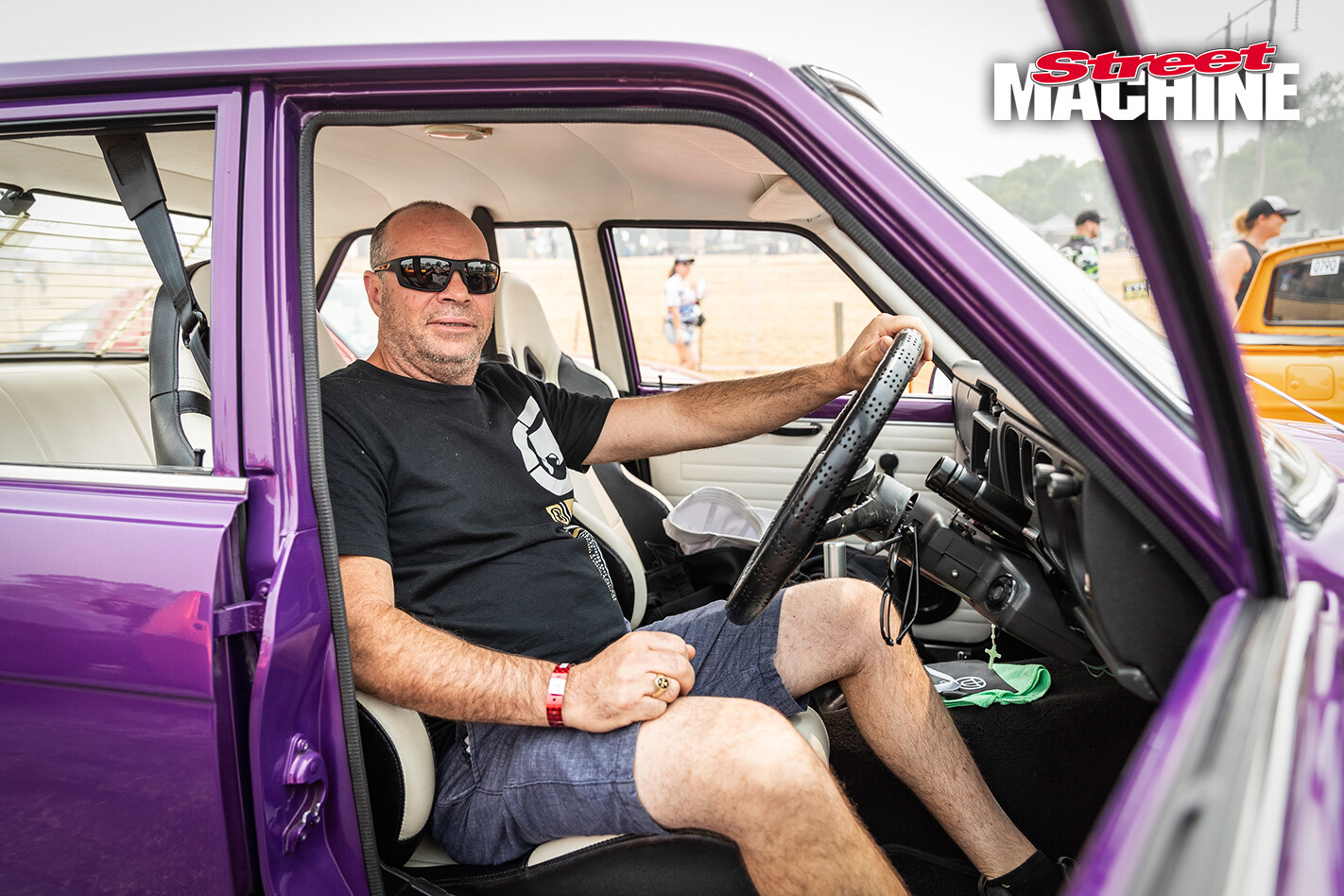 Trudy Manning’s Austin A40 only has a speedo that goes up to 70mph (112km/h), but thanks to a Toyota 1300 driveline swap, including a five-speed ’box and HiLux diff, the old Pommy sedan can at least keep up with modern traffic now. The rear guards have also been widened 1.5 inches on each side, and it’s finished off with Moon discs and wide whites. Wayne Sloan’s stunning XR Fairmont wagon is a genuine 289 car that he’s owned for 30 years! It’s had a few upgrades from stock, with a tunnel ram, twin 600 vac-sec carbs and GT heads on the original motor. A tricked up C4 and nine-inch finishes off the driveline, and that stunning Everglade green paint was laid on in 1996! 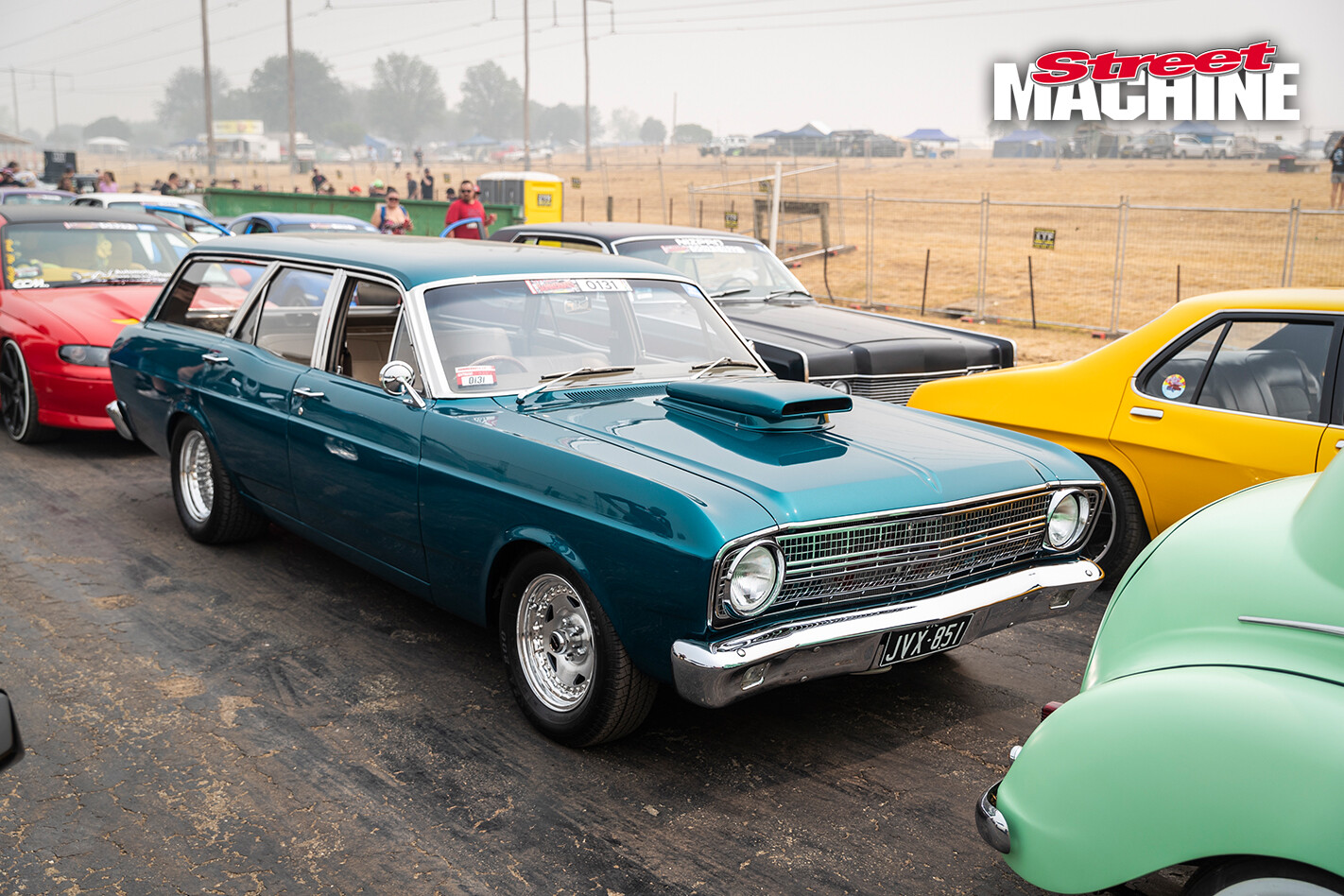 Jay Bonazza’s Mazda 808 is full grandpa-spec with its little 13-inch wheels and full hubcaps, but under the bonnet is a bridgeported 13B out of a Series IV RX-7 that makes 270hp thanks to Injection Perfection EFI controlled by a MicroTech LT-10 ECU. While he loves his rotors, Jay also has a ’32 Ford roadster entered this year, and has a Kombi in the shed as well. Adam Brits’s Morris J2 van looks like it was dragged out of a paddock, and that’s because it was. The ‘John Sands Calendars & Games’ signwriting is still there – barely – but thankfully the old flathead four-cylinder is gone and now there’s a 350 Chev, Turbo 700 and HiLux diff underneath it. Adam’s mates might call it the ‘Skunk Van’, but it ain’t no stinker. My chariot for the City Cruise was Luke Stitt’s seven-seater Toyota Crown wagon, which has been dubbed ‘The Fast Fridge’ thanks to its white paint and side-opening rear door. Luke went to town on the original 7M engine, stuffing the factory turbo housing with GT35 internals and adding a custom-built intake and pipework by Roadrunner Fabrications. When they were first released they were called the ‘four-cylinder limousine’, but Andrew McCarthy’s Bluebird wagon has had a less luxurious life, ending up in a paddock before being rescued by him. He’s tidied up the paint and rebuilt the original L20 engine at home, adding a Gilmer drive to make a bit of noise.