ONE of the highlights of Street Machine Summernats is the Friday-night Meguiar’s Great Uncover, where fresh builds are shown to the public for the first time. Summernats 33 saw the covers pulled off 11 of ’em! Here’s the scoop. 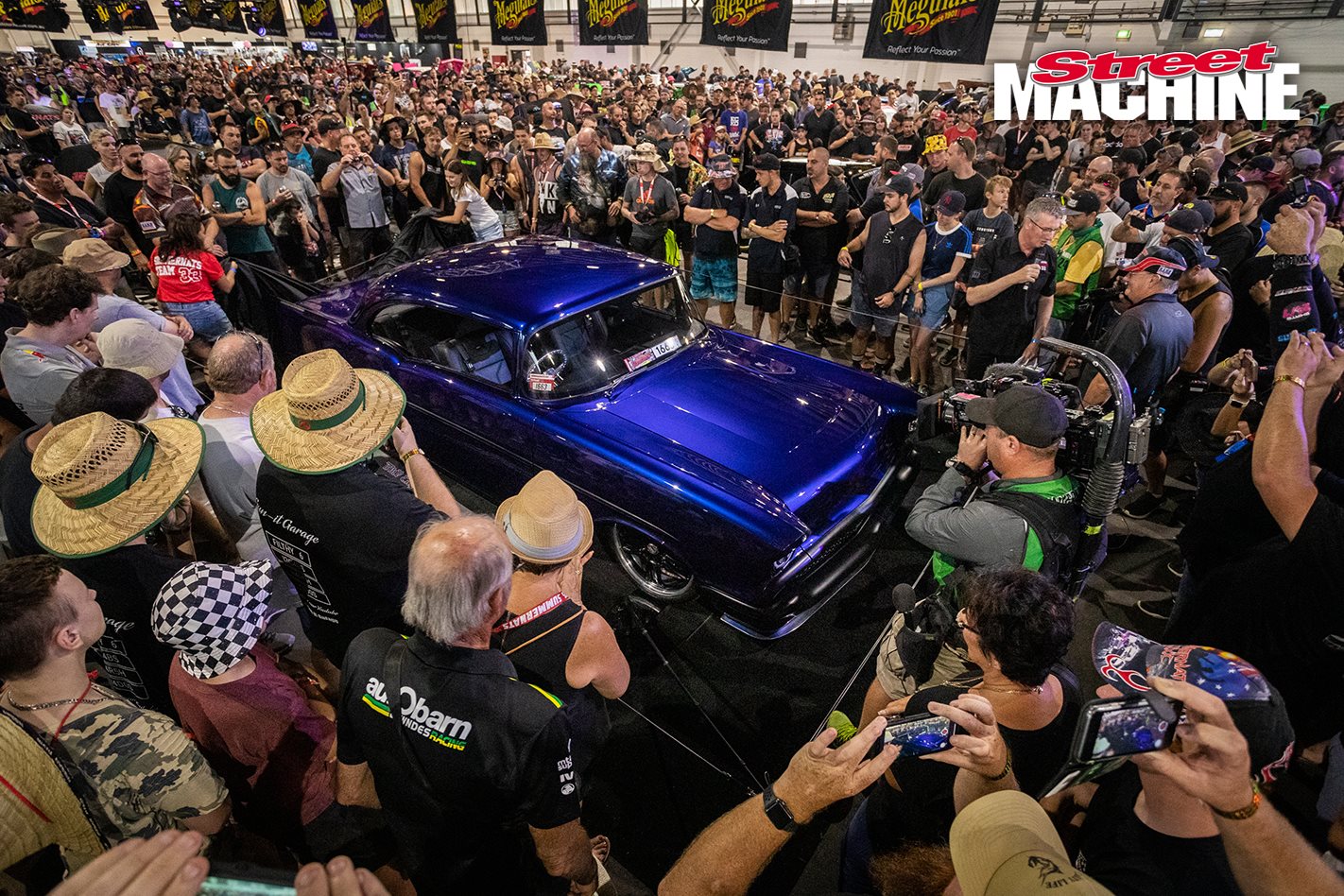 FIRST seen in raw steel in the February 2019 issue of Street Machine, Charles Harley’s epic ’57 Chev Sport Coupe has detail to spare. From the injected 582hp, 486ci big-block Chev powerplant, to the complete custom chassis and thousands of custom metalwork touches performed by Chris Wells from BMV Engineering in Queensland, the tri-five oozes quality. It rides low on air suspension, with 20in hoops connected to a Roadster Shop front end on the turning end and a custom four-link in the burning end. The Chev even uses a modern touchscreen to control electronics using CAN bus network wiring. The front seats were originally found in a dinky-di VF Commodore. 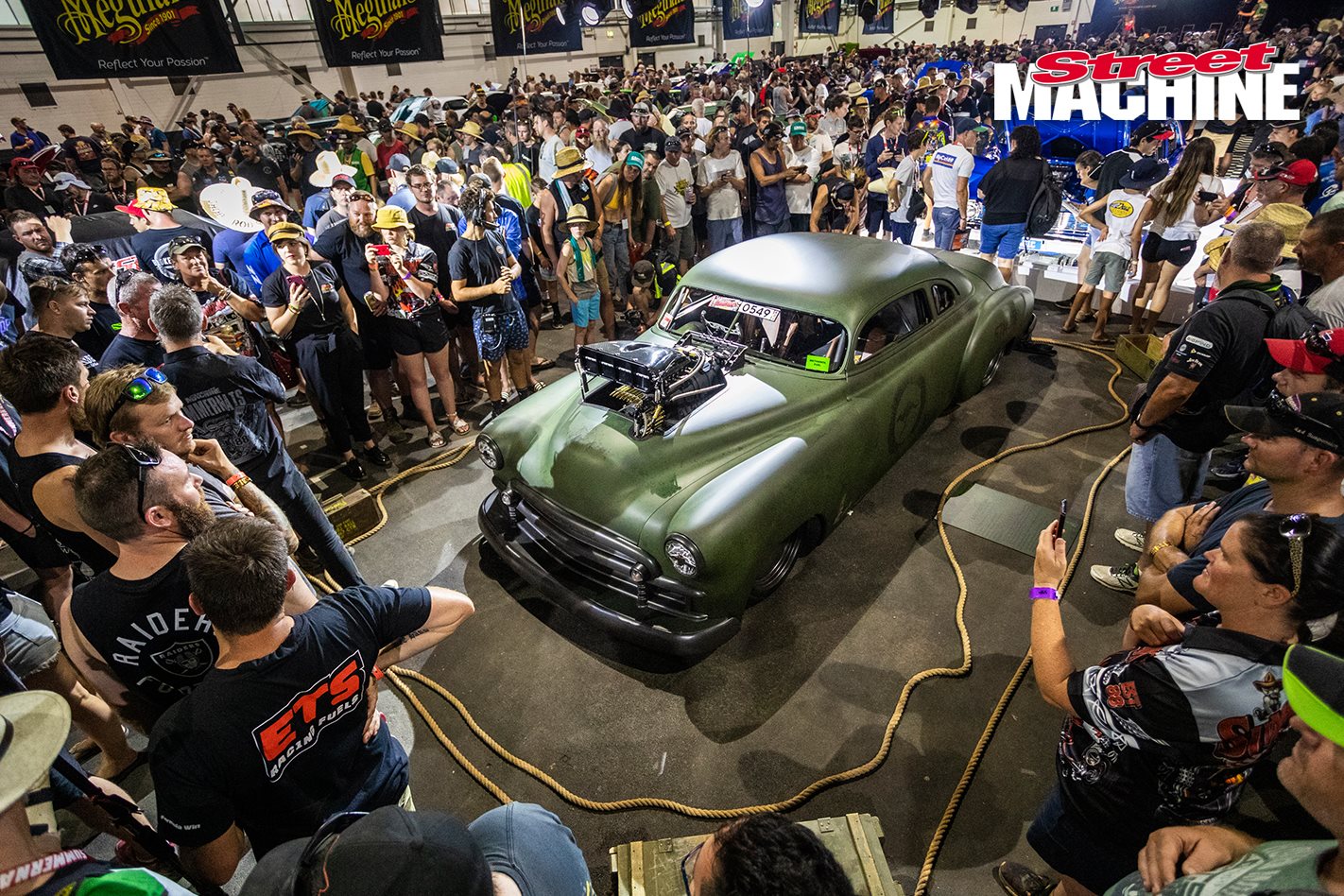 KEVIN Mantach’s ALCOTRAZ HQ Tonner skid car is widely known for making clouds on the Canberra pad, but he’s set to debut a 1950 Chev coupe at Summernats 33. “I’ve had the Chev for about eight or 10 years,” he says. “I bought it as a roller after it had the four-inch chop and had been blasted and was in primer, but things got a little out of control and it ended up with a full tube chassis!” Powered by a Littlefield 8/71-blown 400ci Chev small-block with mechanical injection and dry sump, the combo is reportedly good for 1300-1400hp, and the two-door will sit low thanks to RideTech air suspension. A tilt-front makes it easy to service between skids, which was a primary concern for the build. “We wanted something easy to work on,” explains Kev. 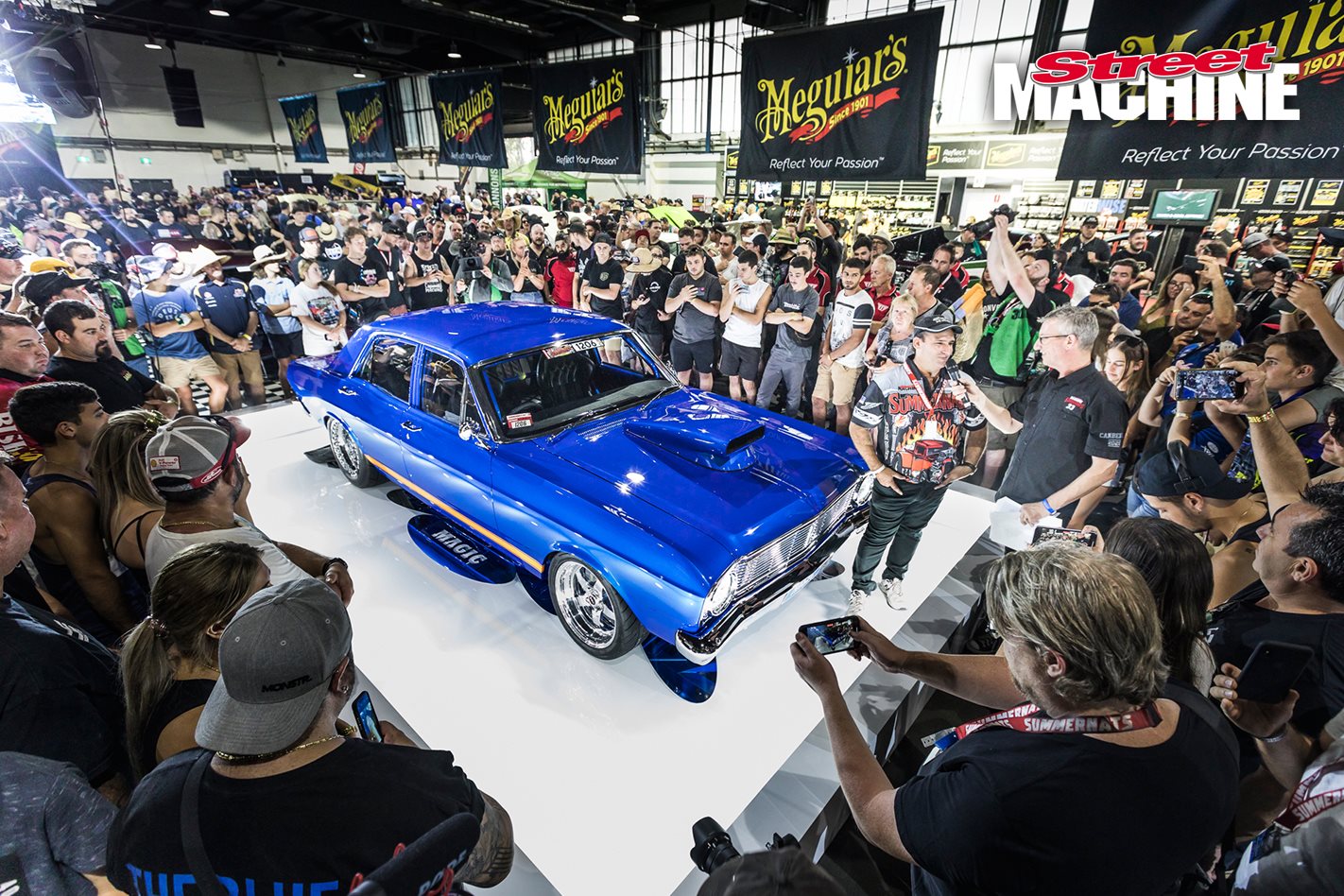 JEFF McCarter from Western Street & Custom has spent two years turning a stock ’68 XT Falcon sedan into a stroked monster ready to terrorise Sydney streets and drag strips. “It is more of a pro street-style car, with a Dart-based 435ci small-block Ford, tubs, chassis connectors, adjustable parallel four-link rear end, sheet-metal diff, parachute system, new floors and trans tunnel, plus a full rollcage,” Jeff says. Finished in PPG paint, the four-door has been built in-house at Western Street & Custom, with a full interior and nitrous system. “The owner intends for it to be a street and drag car,” Jeff explains. “We’ve done some minor jobs for him in the past, but this is the first big build we’ve done for him.” 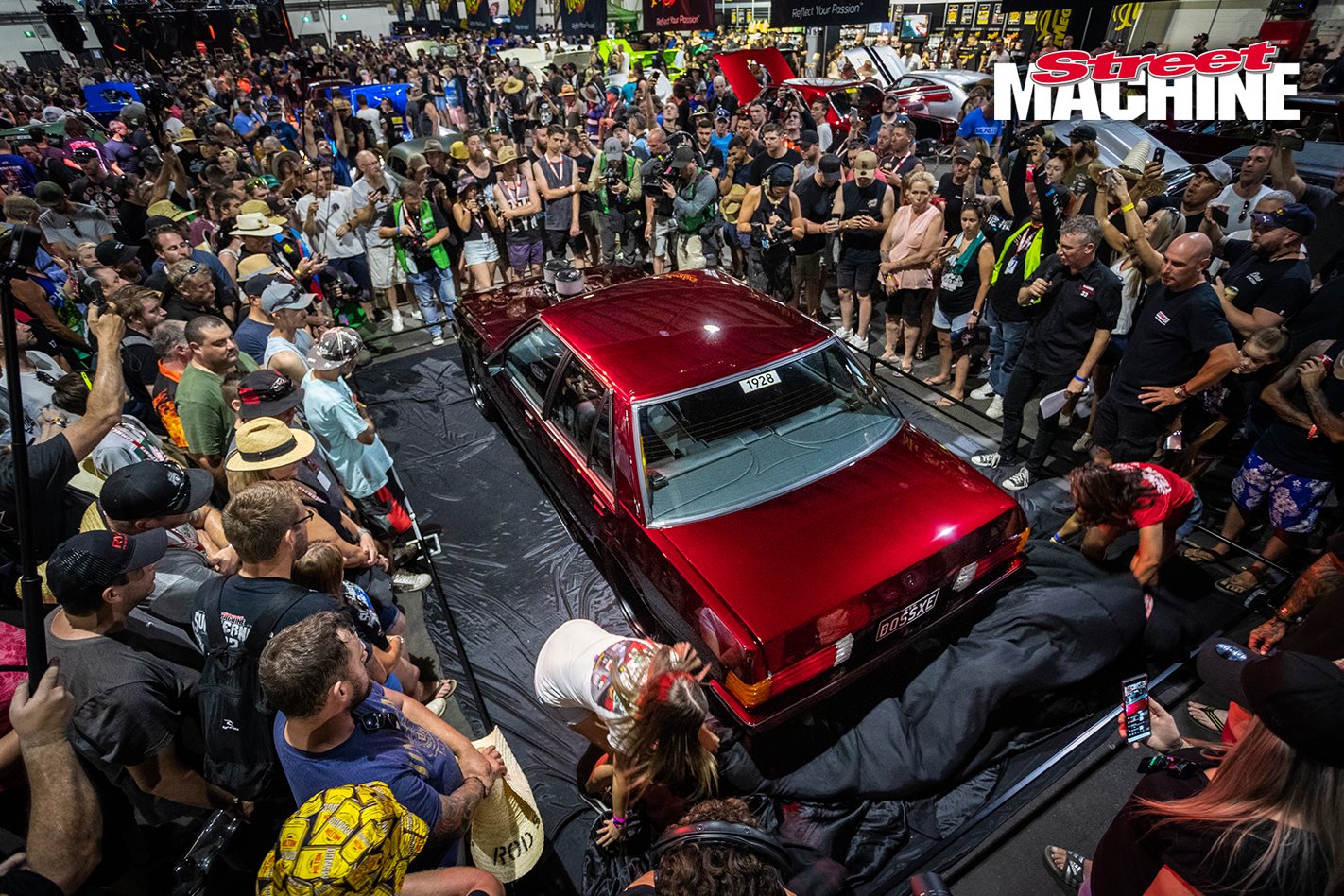 “MY DAD is a dyed-in-the-wool Ford man, so my brother and I just love XD-XE Falcons,” says Morris Markovic of why he’s spent four years turning a mild 351 XE into a 900hp tubbed brute, packing a 441ci Dart Windsor built by ProFlo Performance and 22x12in rear wheels. With a sheet-metal intake up front and a tubbed, four-linked rear end, plus six-pot brakes all ’round, this Falcon means business. However, it is also beautifully finished thanks to a PPG Vibrance paintjob by Summernats legend Simon Bonello from Ground Level. “ProFlo did all the fab work and exhaust, but 80 per cent of the car was done at home,” says Morris. “We did a full custom interior, custom dash. It’s a show/street car.” 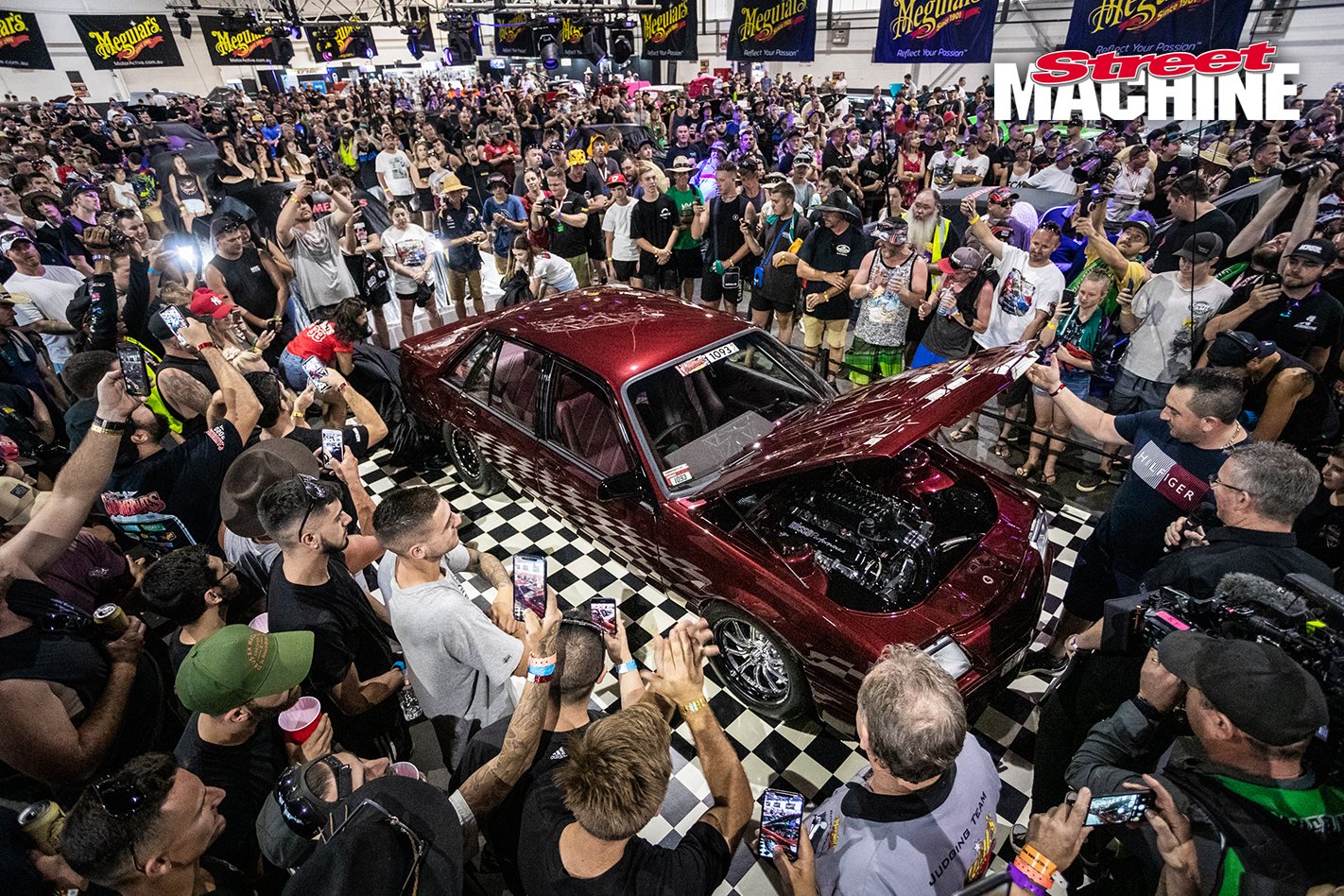 SYDNEY’S Dom Luci is well known around burnout traps thanks to his LITMUP HZ Kingswood skid car, but he unveiled a VK Commodore streeter at ’Nats 33. “This thing is going to be a street car, something I can take my family out in,” says Dom. “We bought an Executive and built it up, inspired by the HDT Brock cars but with my own touches like the colours and whatnot. I try to be a bit different.” Russo Performance built the Harrop 2650-blown LS, looking for up to 950hp at the motor drinking E85 and running a Holley Dominator ECU. The VK’s slammed stance meant a custom transmission tunnel was required, which led to a custom interior. “It has chassis connectors, the Panhard bar was removed for a Watt’s link, and it runs a tube K-frame up front,” explains Dom. “I’m looking to go 235 Radial-class racing, so it doesn’t really look like a race car.” 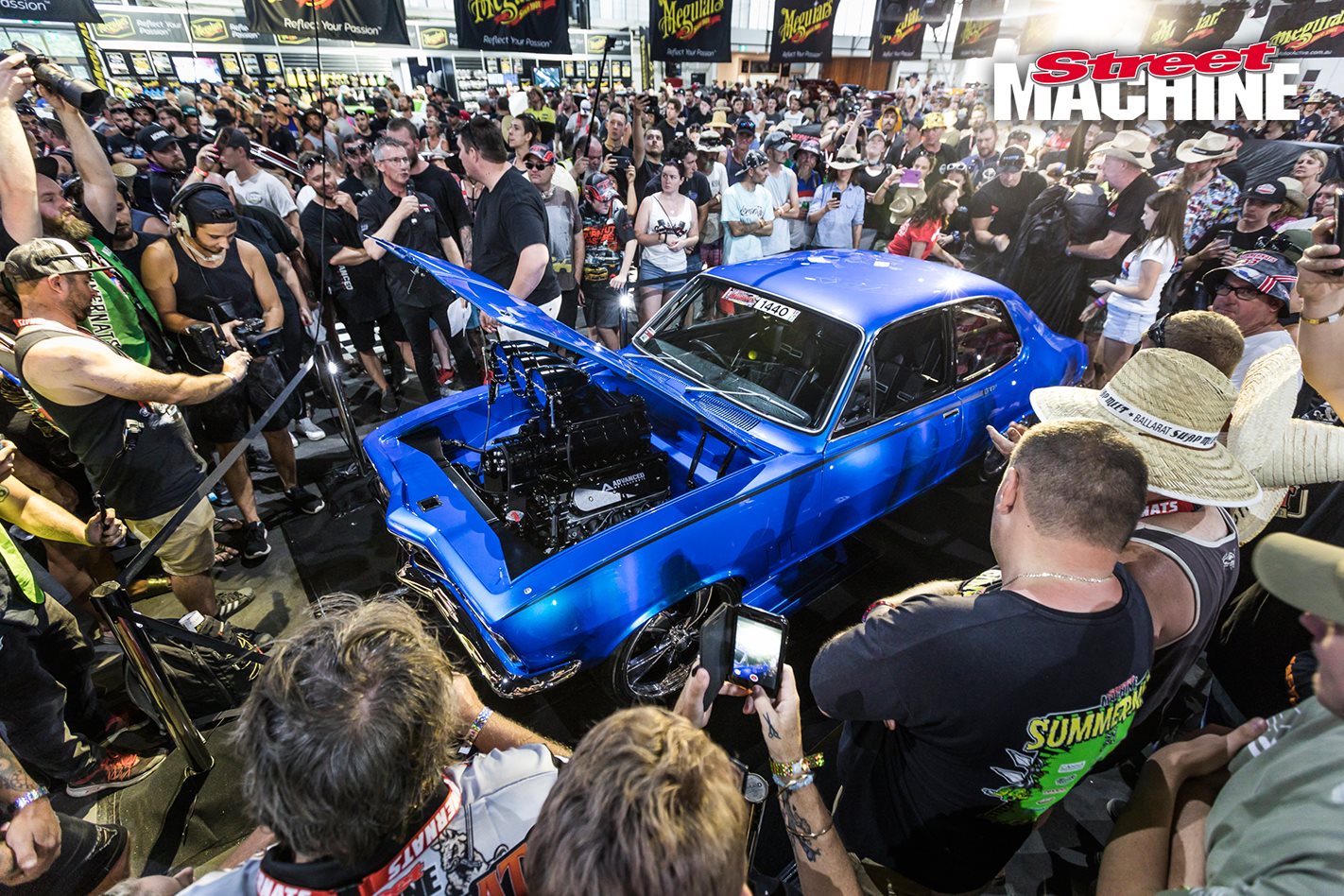 "WE started with a shell and cut from the firewall to the rear out, made new floors and chassis rails, built a sheet-metal nine-inch, tubbed and ’caged it, and fitted a blown 430ci LS engine,” Luke says. Topped by a billet-case BDS 8/71 high-helix blower, the injected combo is controlled by a Haltech Elite 2500 ECU and will run E85 to begin with before moving to methanol. “We made our own custom front end, converting it to coil-over struts like in the rear end, with Wilwood brakes,” Luke explains. “The LJ will sit on 22x13in rear wheels and it will have GT-R style stripes and interior, though it won’t be stock because of the custom floors.” 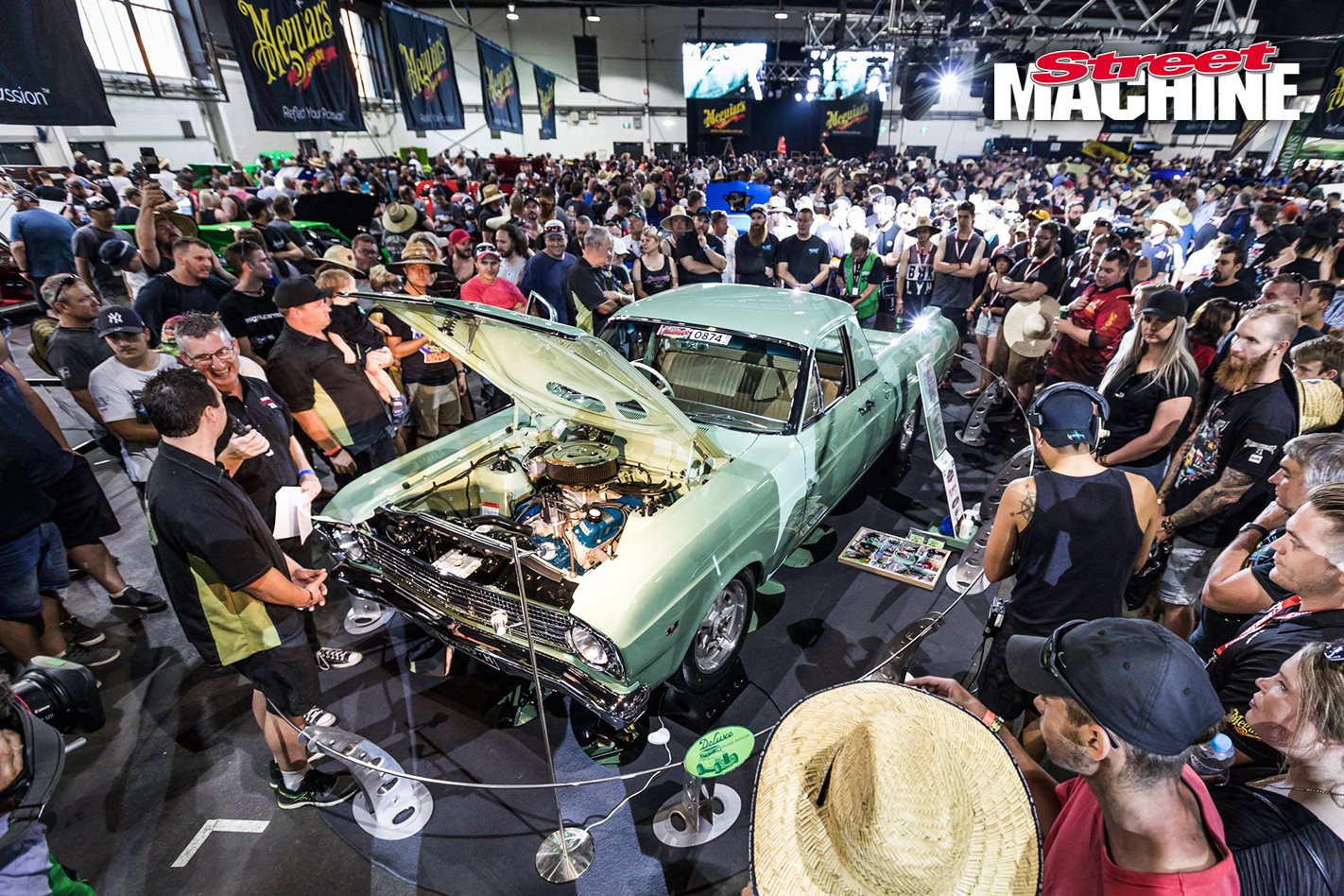 “AFTER bringing 10 different [customer] cars to Summernats in 10 years, it’s my turn now,” laughs Steve Alldrick of Deluxe Rod Shop, talking about the XR Falcon ute he unveiled at Summernats 33. “I bought it four years ago as a work ute to replace a BA that was written off by a kangaroo,” he says. “It came from Glen Innes and was an original grandpa car.” Now packing a 347ci stroker Windsor with a top-end and cam package from Pavtek Performance, the PPG Vista Green ute looks factory fresh but has subtle nods to Ford’s legendary Total Performance era from the 1960s, like a teardrop bonnet scoop. “I really started working on it about six months ago, and I’m lucky I had all the chrome and CAD-plated parts sitting around ready to go.” 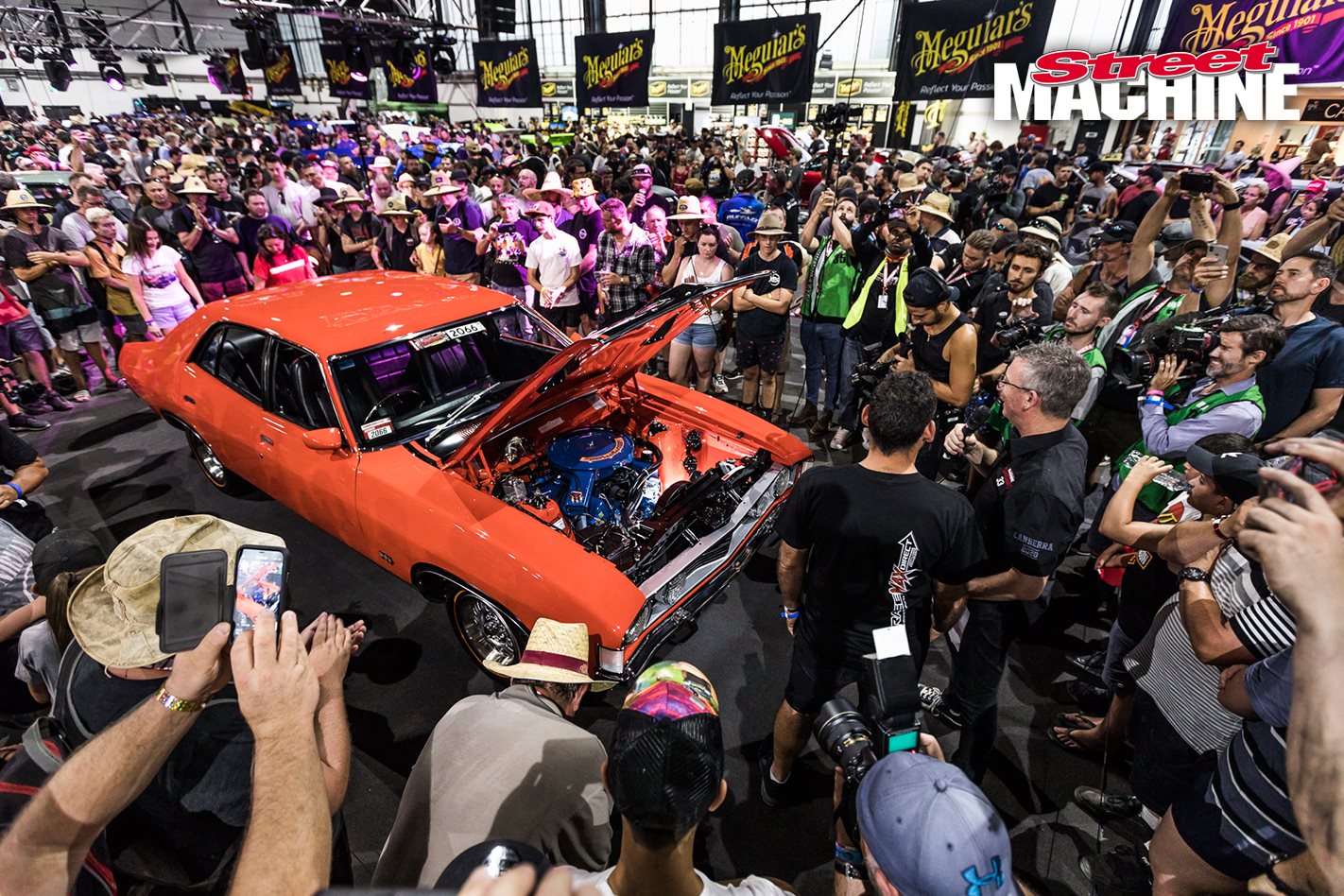 “I HAD a car like this 20 years ago and I sold it when I started my business. I said I’d buy another one,” laughs Bill Kaglatzis of BK Race Engines of his genuine Red Pepper XA GT Falcon sedan. “It was reasonably tidy, and it needed a little bit of love but it just snowballed into a rotisserie build and a full restoration into a concours car.” What is super-impressive is how Bill has hidden a 670hp roller-cammed 408ci Cleveland stroker inside what at first appears like a dead-stock car. “The motor has all the fruit, but you wouldn’t ever know,” says Bill. “I want to go cruising with my kids. It’s a tough Falcon that I hope goes 10.50s without too much trouble. We spent so much time hiding the modifications so it will look exactly how it was back in 1972.” 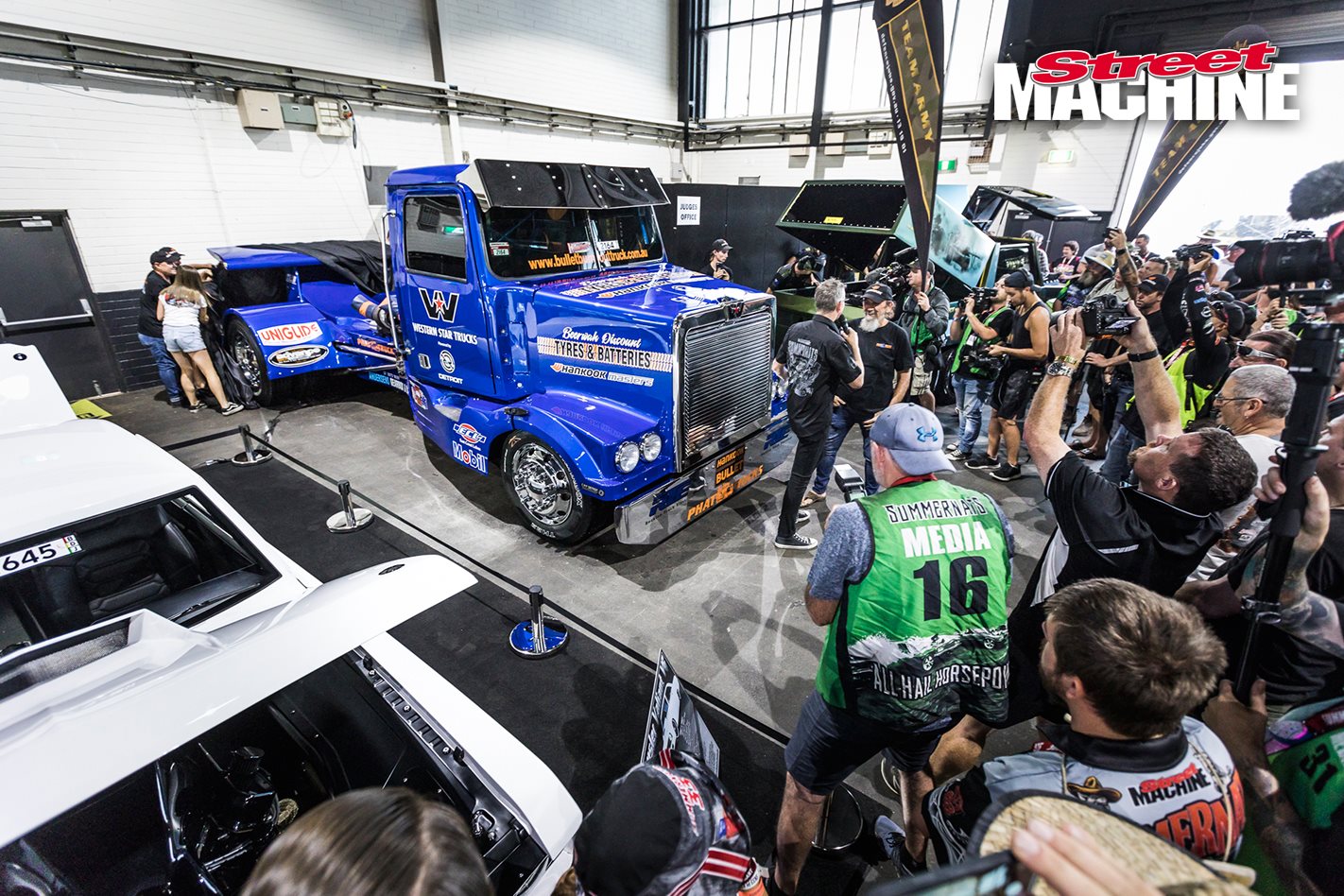 THE world-famous Bandag Bullet has evolved and is now bigger and angrier than ever, and was unveiled as the ‘Bullet Burnout Truck’ at Summernats 33. The Bullet has had a major rebuild, with new owner Laurie Williams making the change from a Kenworth to an entirely different body. The eight-tonne beast is powered by two Detroit Diesel two-stroke V8s, force-fed by four turbos and two superchargers –oh, and don’t forget the NOS on hand. Not that nitrous is really needed, because this thing cranks out just shy of 3000hp and 6000ft-lb! After the 300km/h weapon was unveiled on Friday night, the big rig will be burning rubber on the pad on Saturday! 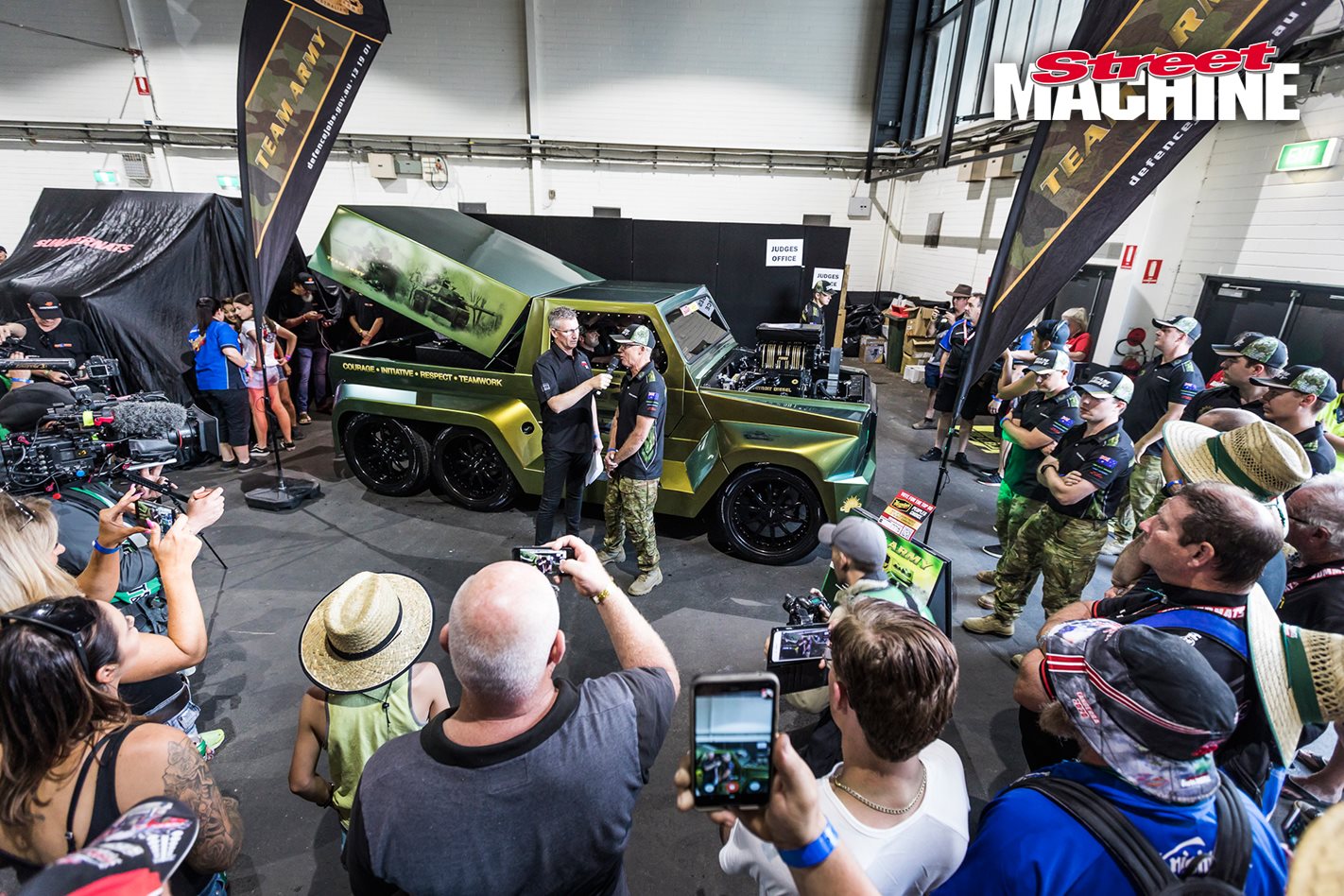 THE Australian Army’s Team Army crew has a new burnout car unveiled at ’Nats 33, dubbed Project Matilda! More on this one here. 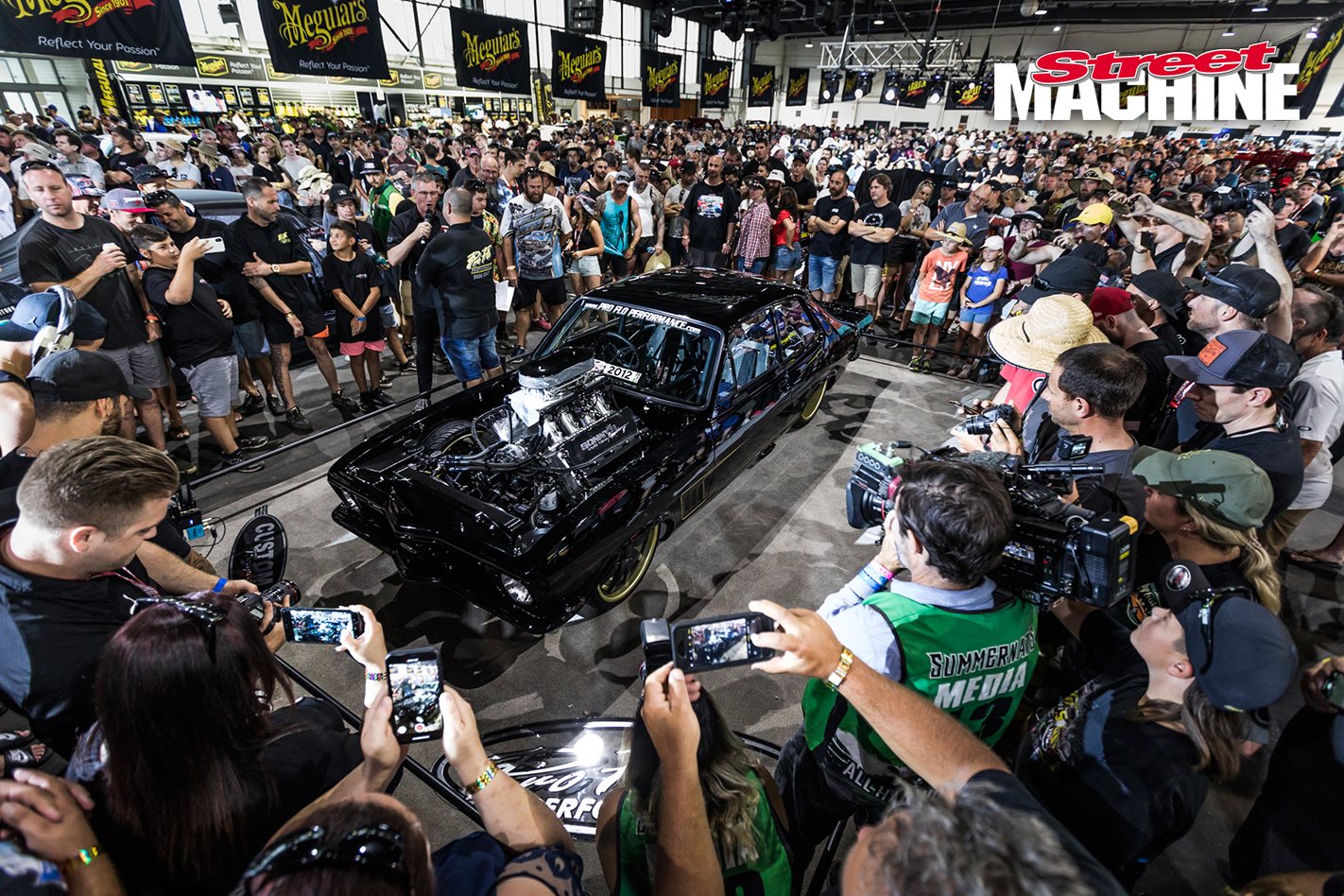 WHEN it comes to building tough cars, few can match Paul Sant and his ProFlo Performance team. With a 940ci Sonny Leonard mountain motor up front, the LJ Torana that ProFlo unveiled at Summernats 33 is no joke, packing 1630hp on 92-octane pump unleaded, plus another 500hp worth of nitrous on top of that. With 24x15in billet rear wheels in tubs bigger than a journo’s bar tab, not to mention a slick PPG paintjob from Danny Makdessi at Custom Bodyworks, it blends show and go beautifully. “The goal is very low sevens on pump unleaded fuel,” says Paul. “Apart from the bonnet and boot, it is all-steel and has all-glass windows.” 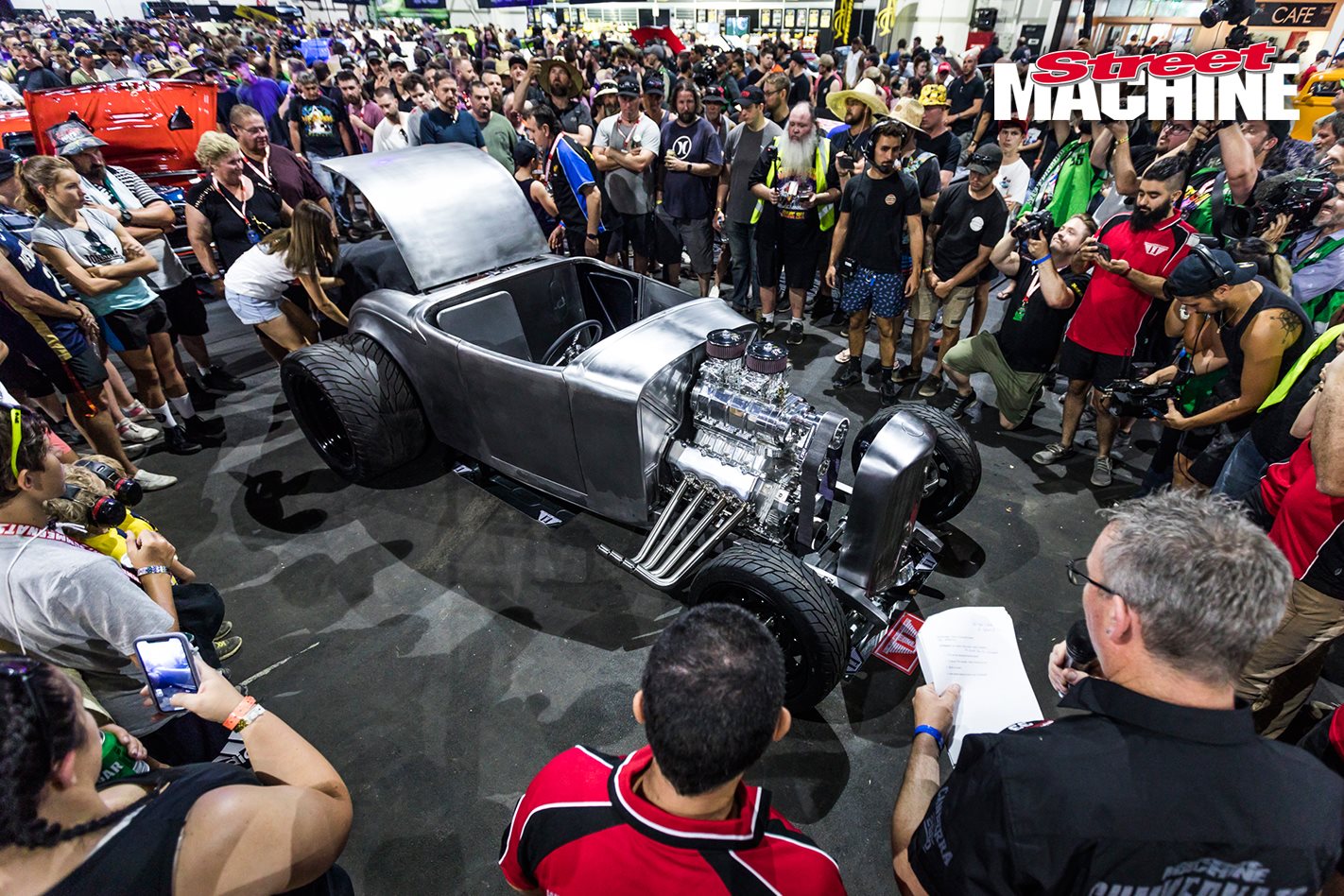 A last minute addition to the Great Meguiar's Uncover was this wild bare metal '32 roadster being built by Western Street & Customs out of Windsor, NSW. The Brookville body has been sliced and diced to follow the profile of the massive rear wheels and tyres, while the tail-lights and number plate are hidden until the ignition turns on. Similarly, the ride height adjusts on the rear through a hydraulic system when the ignition turns on. That wild zoomie-equipped engine is a water-jacketed billet Noonan LS Edge. This will be one hell of a wild ride when it's done.