WITH over 2000 entrants, one of the great joys of Summernats is seeing what new stuff is going to turn up and blows everyone’s minds. This year was no different, so here’s a list of the cars that grabbed our attention and held on tight. Some are outrageous, some are subtle, but they’re all different!

“I figured it was easier to turn a race car into a street car than the other way around,” said Sash Mielczarek of his ’69 Pontiac Firebird. Originally built to race in Pro Mod with a 730ci nitrous motor, Sash bought it as a roller and fitted his version of a street engine – a pump-fuel 540ci Shafiroff BBC that makes about 1500hp thanks to a Blower Shop 8/71 and twin 1100cfm QuickFuel carbs.

It gets even more interesting when you spot the five Lenco shift levers inside: “It’s the first Lenco ST-1200 six-speed on the street and it lets you shift down gears as well.” Sash and his son Jay are regulars, but this was the first Summernats for daughter Charlie Rose.

YEAH, IT’S GOT A HEMI

Mick Cox’s AP6 wagon has been in the build for almost five years and was finished a few days before the ’Nats. “It was in good nick, so it was an excellent base for what I wanted to do,” he said. “I caught up with Jason from Lonsdale Autoshop, laid out my vision and he delivered it.” The wagon runs a 5.7l Hemi and five-speed auto out of a 300C, with V8 brakes and a ton of custom touches throughout.

It sure as hell isn’t the most beautiful hot rod ever built, but Rob Downing’s Fiat Topolino-bodied show rod is definitely memorable. Customised by Little Mick for the previous owner, the body has been chopped 17 inches and widened 22 inches. The driveline is your basic 350/350 combo, but it’s been painted to match the white of the body.

The trick thing with the paint is that the active ingredients (the metallics and pearls) from House Of Kolor’s Antifreeze green paint were added to the white.

Lee Payne hails from the Central Coast and was good mates with the late SM founder, Geoff Paradise. This ’71 Camaro is his first crack at a full rebuild on a street machine, and he has done an amazing job. It packs an 800hp, 540ci big-block Chev with Holley Sniper EFI, which is handy, because there’s plenty of spare grunt to run the a/c and power steering. Lee built the whole car in his shed at home in just over two years.

Dave Cuell is part of the Southern Union crew and has given his HZ Prem a massive makeover in a very short time, handing over the rolling shell to good mate Jake Bradley on Anzac Day last year. Jake did all of the fabrication, including the McDonald Brothers four-link, as well as the panel and paint. The 355 Holden stroker features a Harrop intake and a sideways-mounted carb, which allowed Dave to run the fuel lines in a much neater fashion.

Here's something a little bit different: a ’73 Toyota Corona built by 22-year-old former SM Young Gun Kieran Robinson. The silver sedan has had a serious power update, with a 1JZ pumping out around 500hp at the tyres.

The CPC one-off billet intake hides the injectors and fuel rails under the runners for a super-clean look. It also sports a full custom interior that Kieran stitched up himself, featuring circle-stitched panels from Digital Inserts.

ARE YOU FOR REAL? 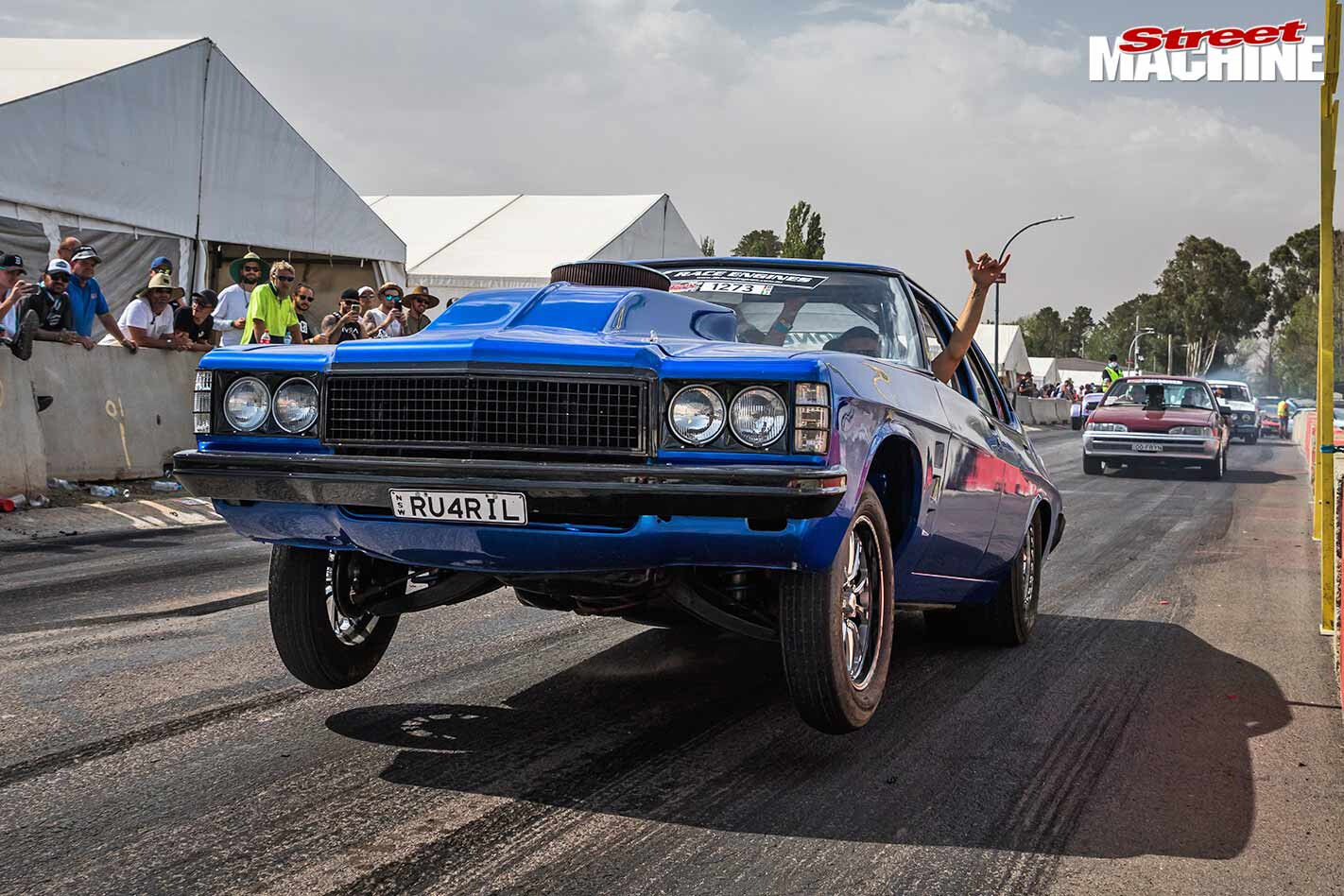 This is what it’s all about: getting a carful of mates, having a great time and tapping into the spirit of Supercruise. The chariot is Martin Ciccone’s HZ Kingswood, RU4RIL, which spent most of Summernats popping wheelies on the cruise route.

Surely the wildest ride at the Supercruise was Fred Cavasinni’s iconic ’34 coupe, which had been off the road for 20 years. After losing good mate Mario Colalillo to a heart attack in late 2018, Fred figured life’s too short and is getting as much use as he can out of the blown and injected methanol-fuelled beast.

Con Soldatos first got this ’36 five-window coupe on the road back in 1984 and spent a lot time at the race track, living his life nine seconds at a time. Running in C/Gas with a tunnel-rammed 383 small-block Chev, the car ran 9.05@154mph, which was right on the record.

It was even quicker with a big-block Chev, running 8.93, but it’s just had a massive birthday after more than 20 years off the road, and now sports an 8/71-blown, 500ci big-block with twin Holley EFI throttlebodies.

Rob Guljas runs Bannockburn Panel Repairs in Geelong and managed to put this HSV GTO together in a little over seven months. Originally black, he’s sprayed it a custom mix of grey with a very fine crystal pearl through then powered it with a 408ci LQ9 that’s topped with a 6/71 and one of Joe Blo’s low-profile hats.

It’s also bagged in the rear to get the car right down over the massive Simmons. Rob nabbed the High Impact award for his efforts.