The Turbo vs Blower Challenge kicked into overdrive with a split of less than one horsepower!

DESPITE stifling atmospheric conditions in the MPW Performance dyno cell the Castle Hill Performance Commodore and AC Delco ProSlammer put on one hell of a show in round two of the Turbo versus Blower Challenge. Running on a special Mainline hub dyno both cars ran over 2800hp, but wound up separated by just 0.7rwhp which sent the crowd into a frenzy. 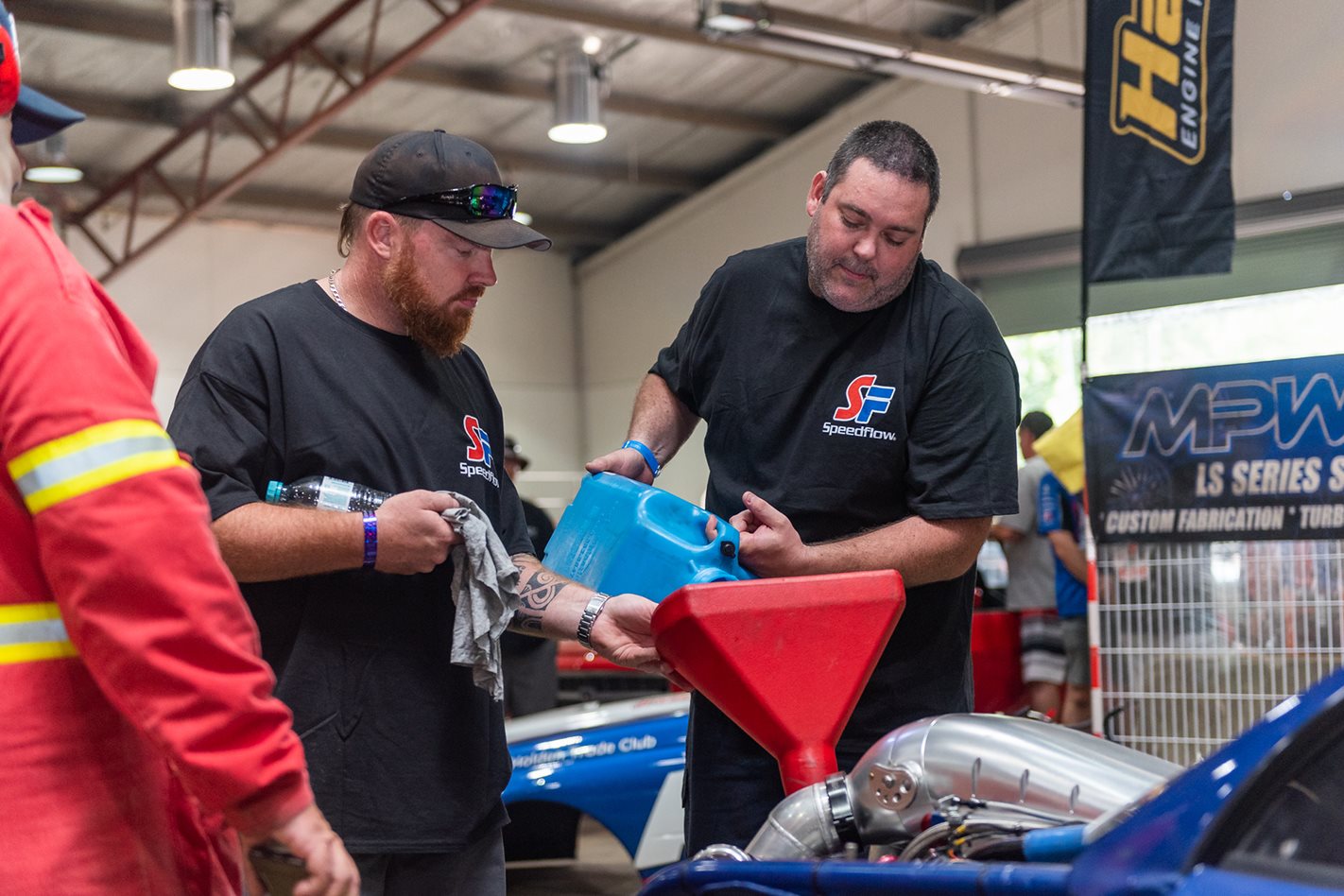 The Fabietti Racing ACDelco ‘Slammer was left on the dyno, though Maurice Fabietti gave it a tune-up before the Saturday run. “We pulled some fuel out to make a bit more power than yesterday,” explained Maurice, who also gave dyno operator Adam Rogash a crash course in operating a 3500hp alcohol door car. “We have levers and buttons all over the place so it gets really busy in there,” Maurice explained. “We actually shift gears at 10,000rpm using the buttons on the steering wheel, using air-assistance.” 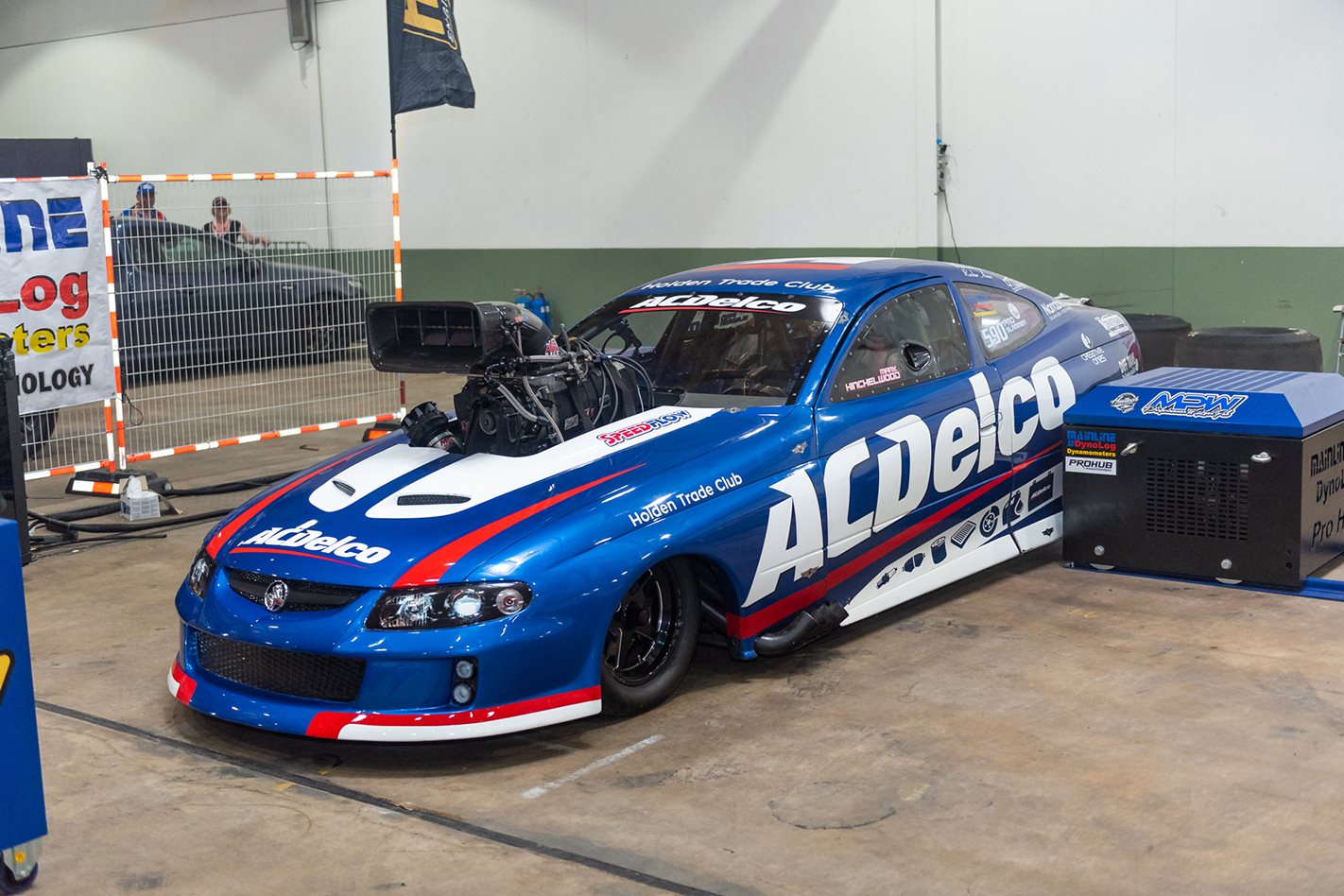 Although it was loud enough to shake the dirt out of the ceiling on Friday the blower car was even louder on Saturday, and stomped out 2823.9hp followed up by a 2808hp back-up run. “That is definitely not as tame today as it was yesterday,” said Adam Rogash after he clambered out of the hot seat. 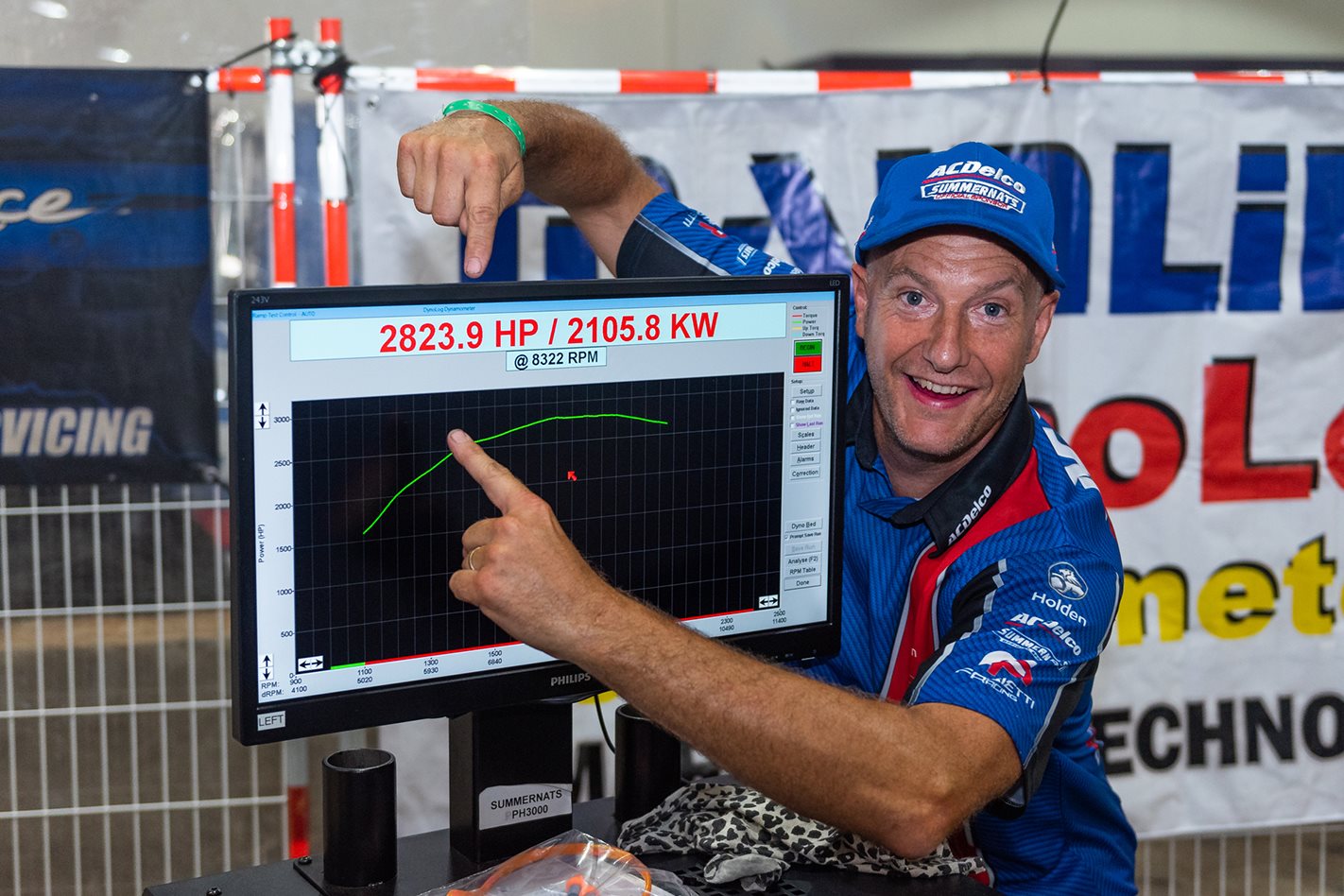 Dale Heiler wasn’t about to let the blower clan take all the glory, however. “It’s probably got 10psi more in it today so we’ll see what it’ll do,” said the noted Sydney tuner, whose twin-turbo 540ci big-block Chev came straight out of the gates to make 2824.6hp and take the win on day two. He backed it up with a lazy 1400hp effort to qualify for the third and final round on Sunday. 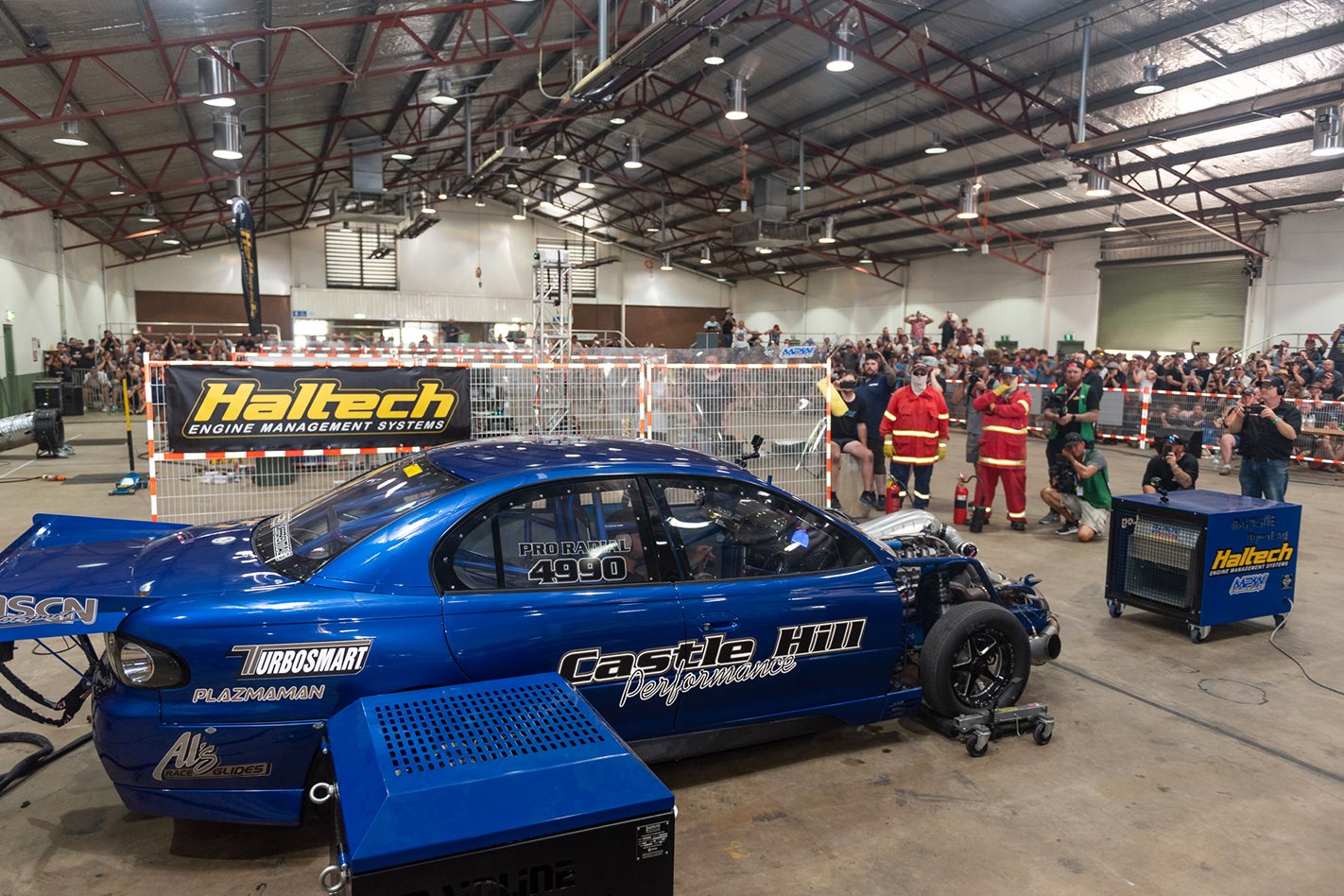 “The air density and high temperatures here knocked our boost from 50psi to 37psi yesterday, and with good air the AC Delco ProSlammer would have done 3000hp today,” said Maurice. “We will go look through all the data tonight and have something ready for tomorrow.” 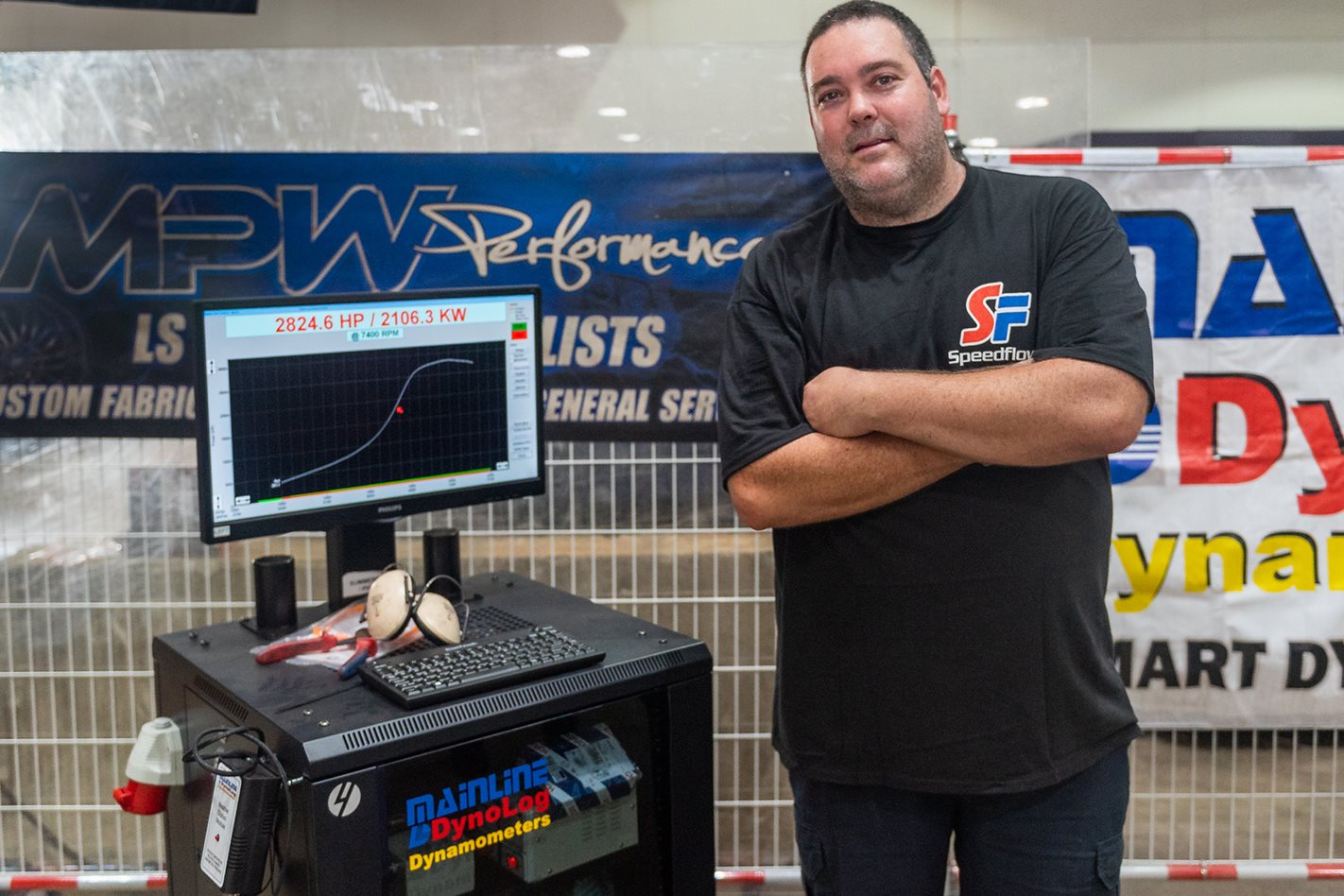