Supernats 2006 returned to Oran Park for a full-strength day of motoring fun. Join us for a look back at some of the highlights

TOO bloody early to get up on a Sunday morning when the forecast is for cloud and showery rain. What the hell is Ahmed thinking about? Sundays are for recovering. Then again, it wasn’t raining when I got up, though the clouds looked pretty threatening. Maybe this is why they call Street Machine Supernats organiser Ahmed Sirhiligis the Mad Turk: because he wants you to get up and out to Oran Park for a full day of motoring mayhem on a Sunday.

Oran Park? Didn’t we go to this at WSID in 2005? Yes — but for this time Supernats moved back home. Arriving at Oran Park, it was immediately clear that plenty of other people had managed to get up early too — the car park was rapidly filling and the queue of competitors checking in was tiny because most of them had been in for ages and were set up either around the pits — for those going on track — or behind them for the show ’n’ shine brigade.

Even better, the sky at the track was clear blue and rain-free — no danger of the burnouts being rained off. And since Supernats is a dry event, the recovery could continue unabated. 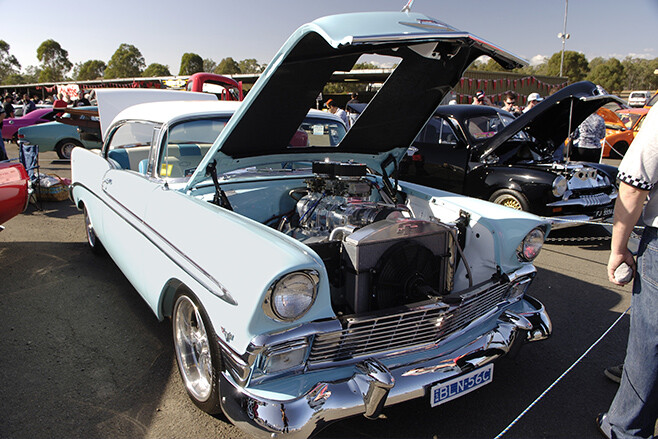 Despite the packed car park, the event didn’t feel crowded thanks to the huge space at Oran Park. With plenty of grandstand seating and more space in the standing areas along the main straight, burnout spectators had plenty of room, while show ’n’ shine fans could take their time admiring the metal without feeling like they were holding everyone up.

The rides on display represented a wide slice of Australian car culture, with everything from classic US and Aussie muscle, through ricers chock-full of the latest sonic weaponry and on to rods, sky-high 4x4s and bikes. In among the trade stands, you might even have spotted Street Machine — or more importantly our Comfort Cruiser Galaxie. Our giveaway car drew a constant stream of admiring and rather wistful looks. 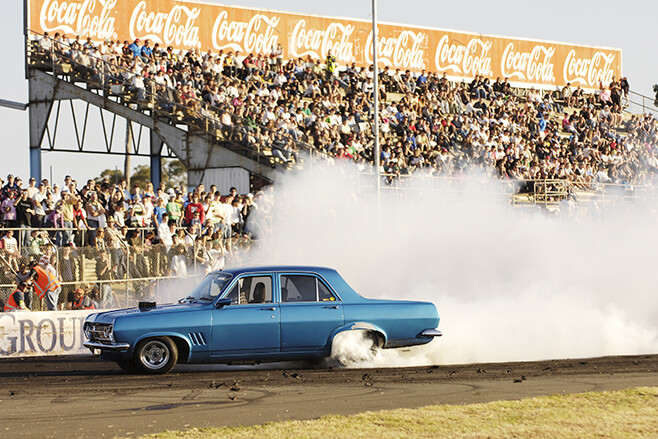 Out on the track, the crowds were getting close to the action thanks to a gentle breeze wafting tyre smoke back towards them. But hey, it’s open air so smoking’s still allowed. Among the big-name competitors, Mark Yardy put on an awesome display in his YUMMY ute, making instant and constant thick clouds of smoke. He might have only burst one tyre but he did leave a big chuck of it burning on the track — wonder what the circuit racers would think of that? Mark’s had some bad luck with the ute over the years so it was good to see him get right through the skid and take second V8 burnout. YUMMY was for sale and a few unkind voices suggested that he’d finally sorted it just so he could sell it.

A surprise for many — in the pits and on the track — was Silver Bullet, once again sporting twin blowers. The last time most people saw it, it was down to one. And Gary Myers was keen to prove they really do work, giving the Bullet a light run in the Super Skid competition, creating a bit of smoke for the crowd and a lot of cleaning work for himself. With a queue of waiting burnout entrants filling the bottom of the track, Ahmed certainly did have a full day’s worth of rubber burning but he wasn’t going to leave it all to them. In his famous HD ute he put on a classic Mad Turk performance, finishing in customary style, standing the roof. FORZA1 suffered an under-bonnet barbecue and needed attention from the fire crews. Making the trip up from Wagga to show how the country boys do a skid, the VANMAN crew popped the tyres off their pano, and earned a great response from the audience. By the time qualifying was over and the final was ready to run in the Super Skids, the sun was setting and families were packing up to get the kids home. But a strong, dedicated crowd stayed into the night to see Gary Myers take the win in GM176.

On a sad note, Ahmed’s father died shortly before the show and he dedicated the event to his memory. Mate, you did him proud. 1. While nostalgia rods are all the rage, Trevor Burke’s pick-up proves there is still a place for the smooth and contemporary look. His truck features a bunch of mind-boggling body mods and runs Jag suspension up front, with Commodore IRS at the rear. Check out Street Machine Fords 8 for all the details 3. When Rod Rodziewicz told us he had just run his newly completed HR down the WSID quarter-mile we thought the small block-powered early might have run a 13 or even high 12. No chance — this mild-looking beast snapped off an 11.6 first time out! “That was on road rubber too and without the gas — I’m hoping for an 11.0 in street trim,” said Rod 5. Joe Zammit’s 383-powered VL is a WSID regular and his experience paid off, taking out the Off Street Racing title. The VL runs flat 11s over the quarter and does a fair skid too! 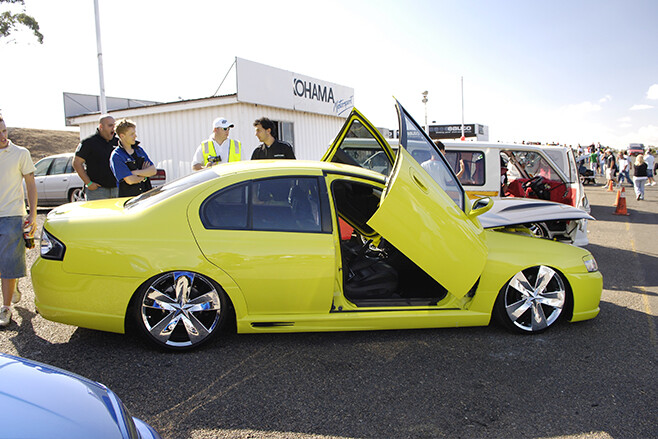 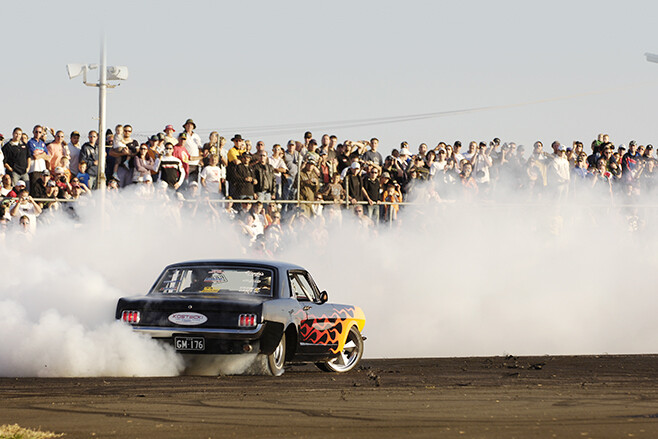 8. Mark Yardy’s YUMMY put on the performance of its life to win Second V8 Burnout