DAY two of Tassie Nats saw the drag classes head down the strip to show their metal for both qualifying and eliminations, plus the burnout qualifying for both the six and eight cylinder classes kicked off from late afternoon and went well into the night. Chris Marsh was using his time at Tassie Nats to test out his freshly completed EA Falcon. The majority of the car was built in just six weeks, the boys plucked a 383 small-block Chevy from Chris’s old Torana drag car, running methanol and a new 14/71 blower. Chris pedalled to a best of 9.86 over the quarter with a bunch of throttle lifting to keep the car straight.

| Read next: Tassie Nats Day One Lee Killen’s weekend was cut short when the LS1 in his VN let go during the expression sessions on Friday night.The boys from Victoria still stuck around for the rest weekend in high spirits, and there’s no doubt we’ll be seeing the NVASFT VN back in action soon. SM Drag Challenge regulars had a strong showing on the strip, including Josh Grant in his turbocharged Ecotec VB Commodore. Josh lost out to Chris Palfreyman’s Barra-powered XD sedan, who went on to race against SM DC regular David Best’s VY SS Commodore in the heads up radial final. The race went down to the wire, Chris’s XD blowing the tyres off mid-run to put down a 10.25 to David’s 10.00 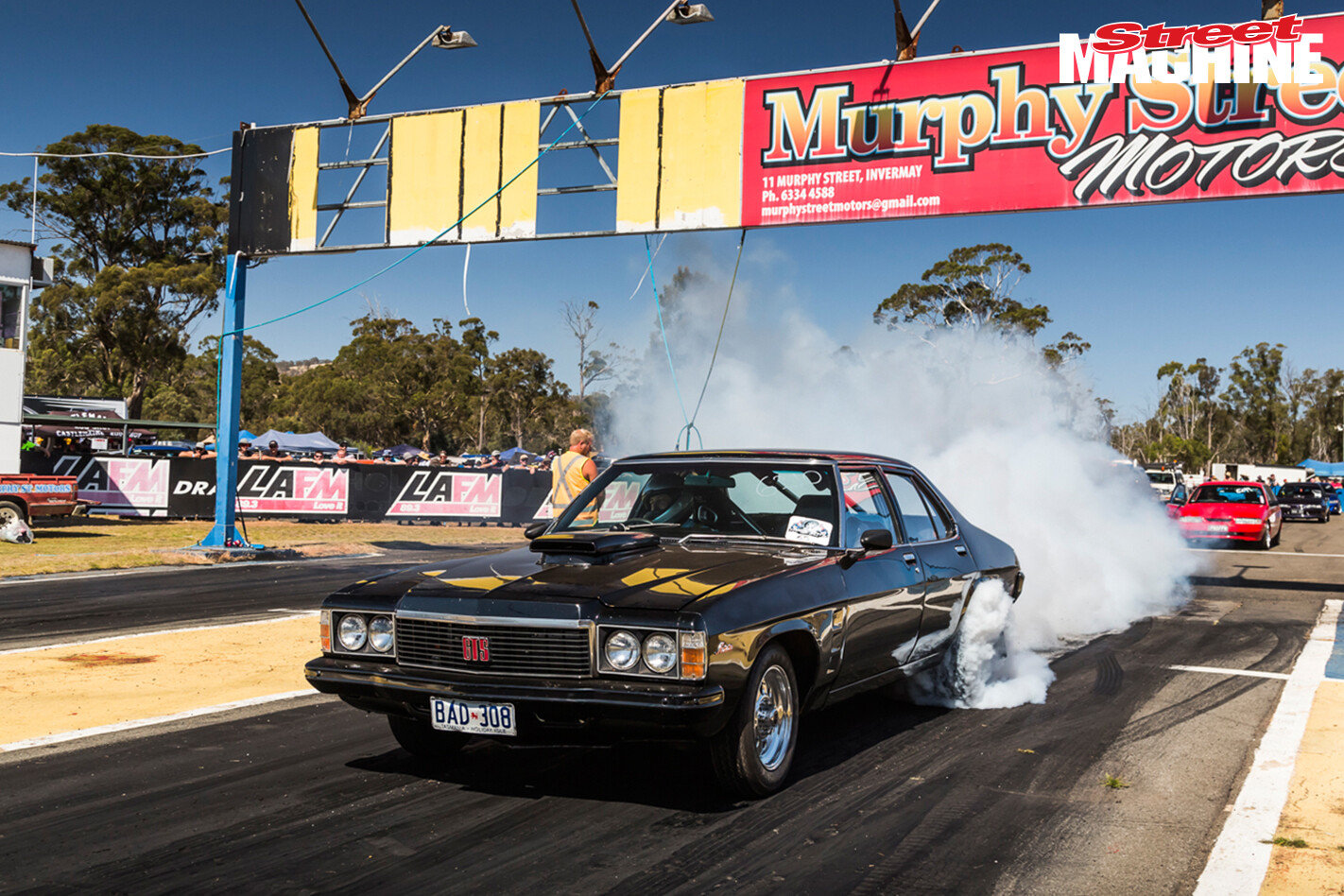 Craig Burr’s ’75 HJ Monaro performed strong in the drags, the 434ci dart small-block Chevy putting its horses to the ground to take home the win in the street class final against Jezz Gearman’s LSA-powered R31 Skyline. The race went down to the wire with Craig running an 11.11 versus Jezz’s 12.00. The ONSMOKO Falcon wagon was on full song last night in the six-cylinder burnout class qualifiers, the turbo-Barra putting on a smoke show for the fans.

James McGregor was hell-bent on destroying tyres in the EX5LTR VN Calais. The engine builder has concocted a killer LS1 donk, capable of running on limiter all day long – which is exactly what he did in his qualifying run in the V8 class on Saturday afternoon.

On Sundays menu is both the six-cylinder and top 30 burnout finals, plus the cruise session and crowning of the grand champion - so stay tuned for results!