THE Drag-Ens Hot Rod Club left nothing to chance with the inaugural Rattle Trap beach sprints at Crowdy Head on the NSW mid-north coast last weekend, ordering up a perfect autumn day and even a pod of friendly dolphins who cruised in early to see what all the fuss was about. Fifty early hot rods, nearly all of them flathead V8s and four-bangers, and a dozen old motorbikes roaring down the beach at full noise is a lot of fuss! The Race of Gentlemen-style event went off like clockwork, with entrants and spectators alike stoked to be part of what was a very special day and will hopefully become a bucket list item for everyone else for many years to come. Phil Bond from the NSW Central Coast in his four-banger 1928 Model A: “I built it for $1800 to do the Mud Run. This is what it’s all about, simple stuff, keeping the dickheads away. It’ll be big” 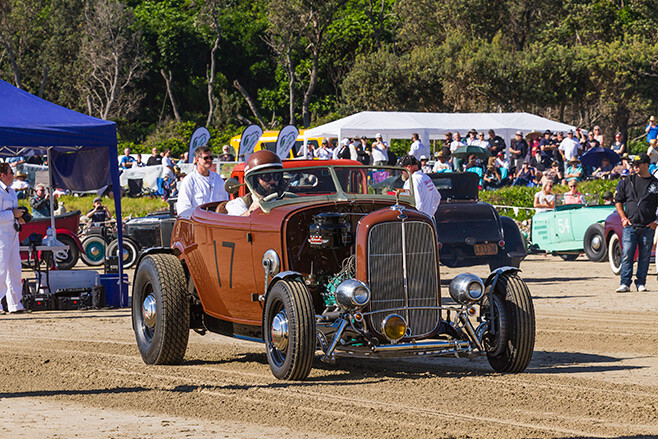 Dave Lance from Penrith ran all day in his ’32 flathead roadster: “It’s magnificent, like going back in time. Every car belongs here. The sand is a lot smoother and firmer than I thought it would be” Melbourne’s Doug Sterry built this A Model to run in hill climbs, sprints and motorkhanas: “It’s all about just being here, but would be even better if it was timed to make it more competitive” 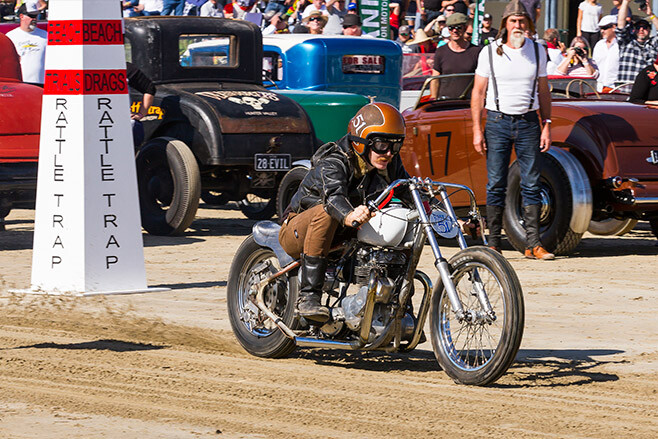 Zac from Newcastle built this 650 Triumph with his old man Ralph, just for this event: “We finished it yesterday. Rattle Trap is so cool, very unique. It’s already on the calendar for next year” This Model A was built before WW2 by a serviceman who never made it back. How appropriate that’s it now with Norm Longfield: “What a fantastic day. It’s a lot more fun than drag racing” 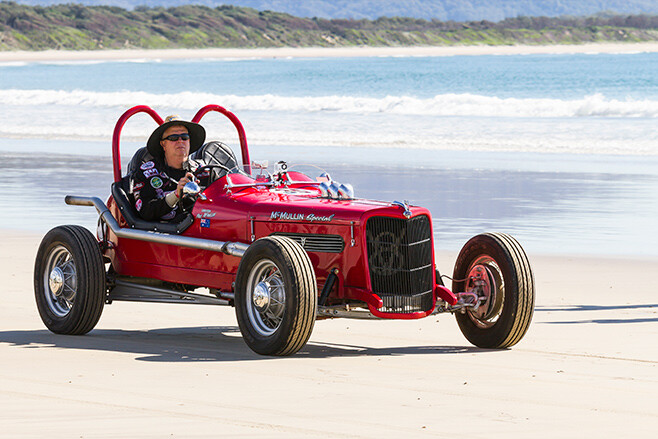 Paul McMullin and his dad built this flathead-powered replica of a 1935 Indy car in Brisbane for historic circuit racing. So how did it take to the beach? “Mate, it’s awesome, the best” Jimmy Minas from Cronulla in the 1926 Model T four-banger he shared with James Rodriquez: “It’s unreal, we’re really loving it. So good they’re doing this here in Australia” Brisbane’s Mason Cahill was amongst the quicker cars in his 265ci Hemi six-powered 1923 Model T roadster: “It’s the best day ever, you couldn’t have more fun in a car” Dianna and Rod Brewer from the Gold Coast shared the driving of their big-block ’34. “How much fun is it to run a car along the beach? Dianna said. "I never thought we’d get a chance to do this"