Burning rubber and churning dirt at the Tooradin Tractor Pull

THEY’RE big, they’re loud and they’re totally insane. The crazy dirt-churners of the Australian Tractor Pullers Association (ATPA) are absolutely awesome to watch and we had a chance to check them out at Tooradin, a little south and east of Melbourne. If you’ve never seen these beasts in action as they attempt to pull their weighted sleds down the dirt track, then it’s time to get off the couch and get amongst it.

Tractor pulling is huge in the US and Europe, and while it’s not so big Down Under yet, they certainly put on a good show. Concentrated around Victoria, South Australia and southern NSW, the ATPA national series consists of eight rounds with eight different classes contested – ranging from the Limited Mini Modifieds through to the massive Open Modified tractors. There’s also a separate series that runs in Western Australia. 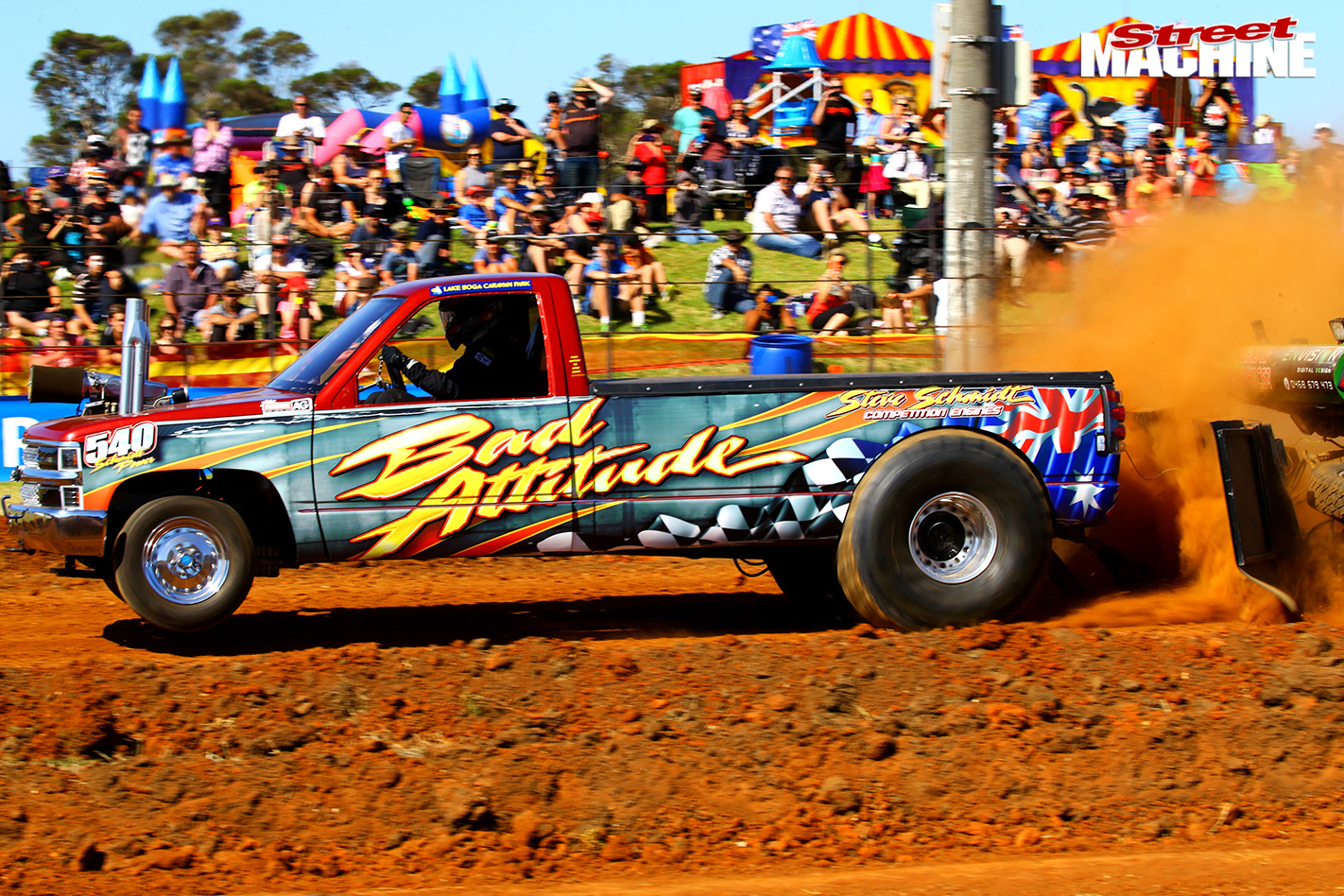 Limited Mini Modifieds are the small fry of the tractor world. They run carby V8s under 351ci with pump fuel and a flat-tappet cam, and have to weigh less than 770kg including driver for the lowest weight category. There’s two heavier categories as well (825kg and 900kg), and every tractor in the class makes at least one attempt at each. We saw tractors with small-block Chevs, Chryslers and Fords, with a variety of auto transmissions and nine-inch diffs.

For those looking for a bit more punch, there’s the Super Mini Modified class, which allows small-blocks up to 450ci along with roller cams, and mechanical or electronic fuel injection. The minimum weight is 860kg, so you’ll start to see Dana 60 differentials and plenty of stroker small-blocks. 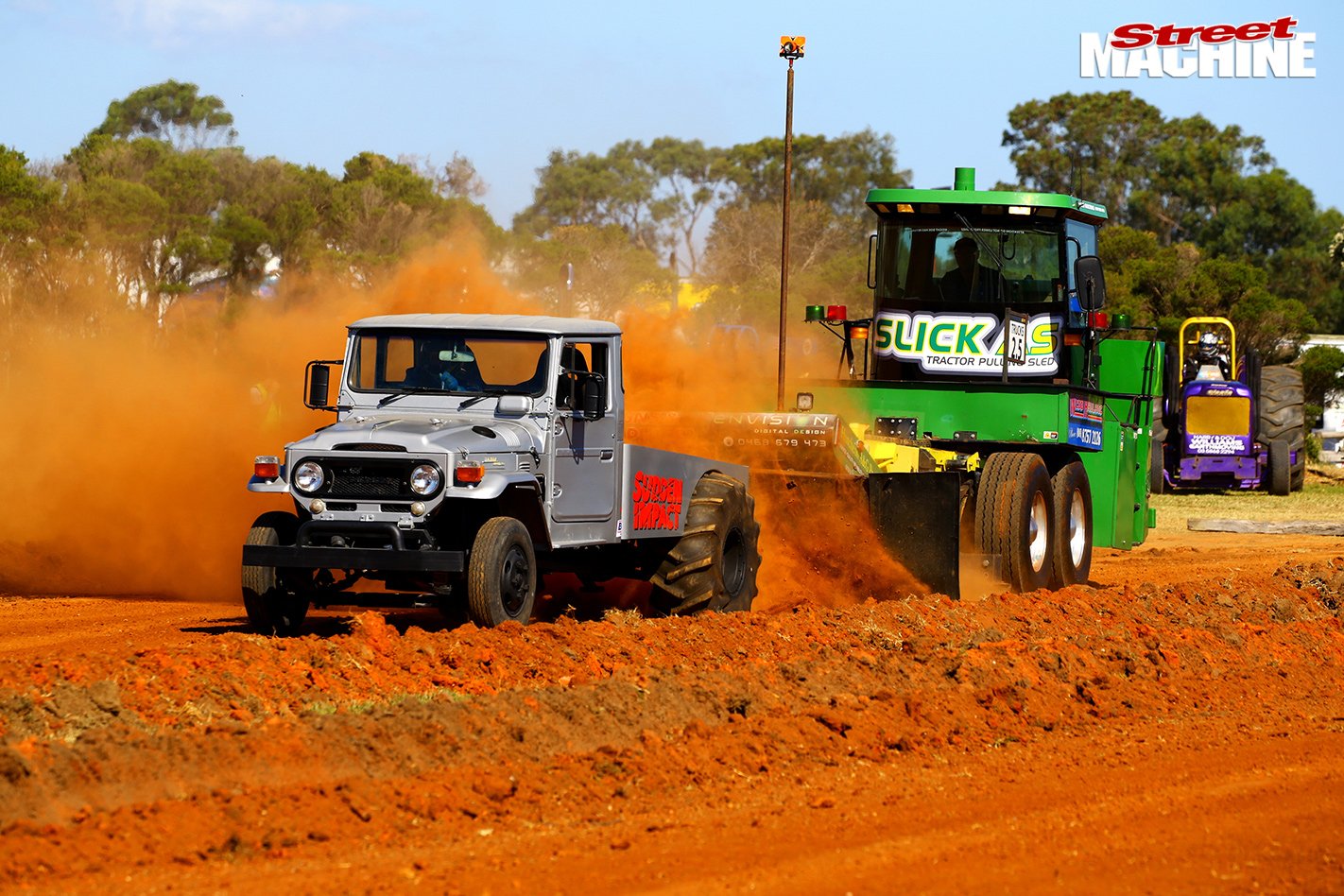 But if it’s blowers and turbos you’re after, then the Open Mini Modifieds might be your thing. Blown big-blocks are the norm here, although you can add some turbos, nitrous or even tip in a little nitro-methane (up to 20 per cent) if that takes your fancy. Hell, they’ll even allow a helicopter jet turbine engine if you can squeeze one in under the weight limit!

The Mini Modifieds, in all their various forms, are fantastic to watch. They might not have the wow-factor of the big multi-engine combinations in the Super Modified and Open classes, but they move, bounce and fight like a feral cat on the end of a leash. The Open Mini Modifieds are truly insane, with 2000hp+ blown alcohol motors taking up half the tractor, with just a seat, rollcage and a pair of tractor tyres for company. You’d laugh out loud if someone suggested you build a blown alcohol go-kart, but that’s almost exactly what these things are. 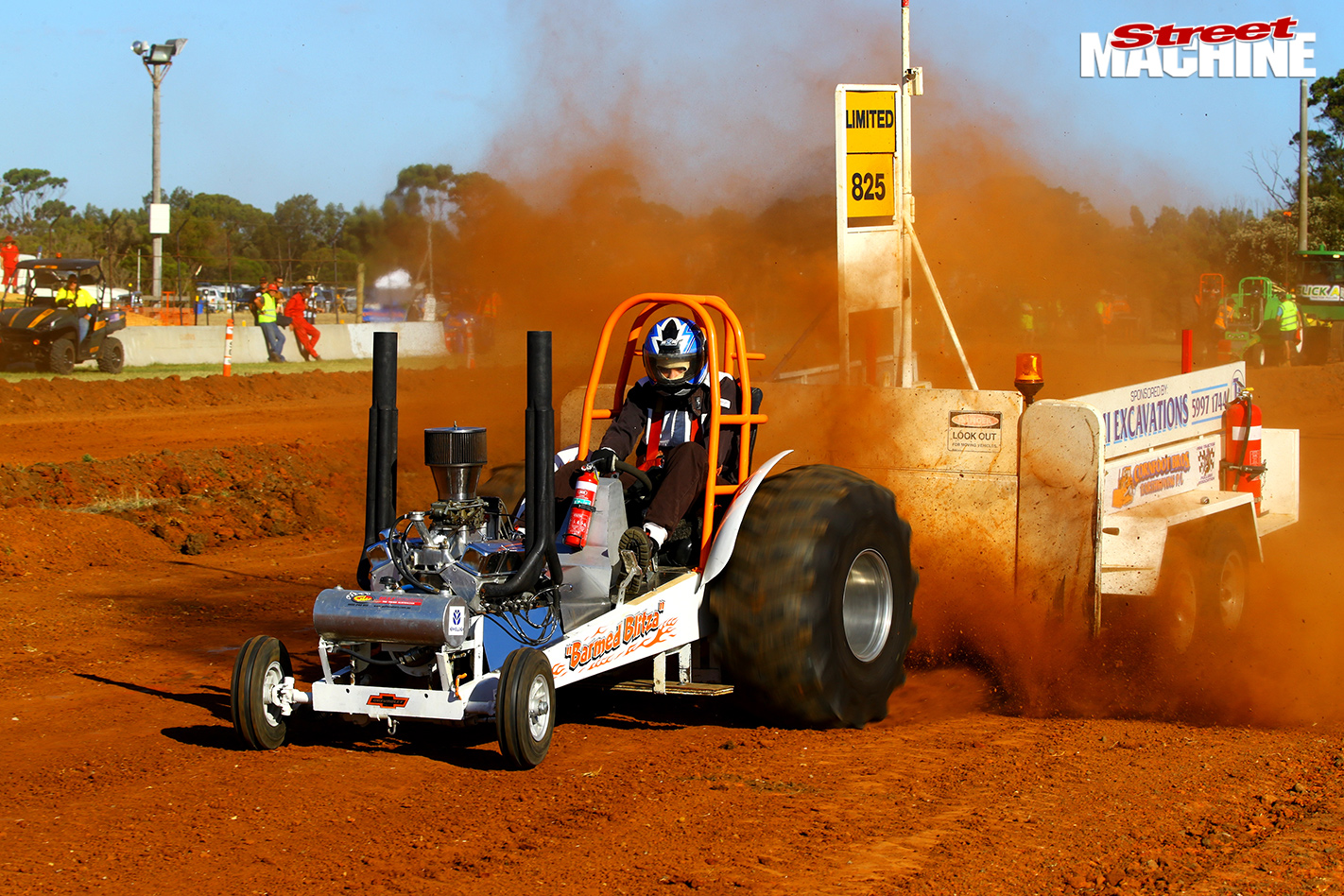 Then you’ve got the big boys. The class names are similar – Limited, Super and Open – but these things start at the 2.5-tonne mark and work their way up to over five tonnes for the big Open-class tractors. These monsters can use engines of just about any capacity or type. In Europe it’s not unusual to see four jet turbine engines hooked together in one of these behemoths. The craziest units here in Australia use Rolls-Royce Meteor tank engines with turbos and EFI (the Riverina Screamer), or multiple big-block V8s (Plum Crazy).

The Super Modified class allows for multiple motors, but only if they’re naturally aspirated and measure up at less than 1004ci in total; if you want a blown motor you’re limited to 502 cubes. 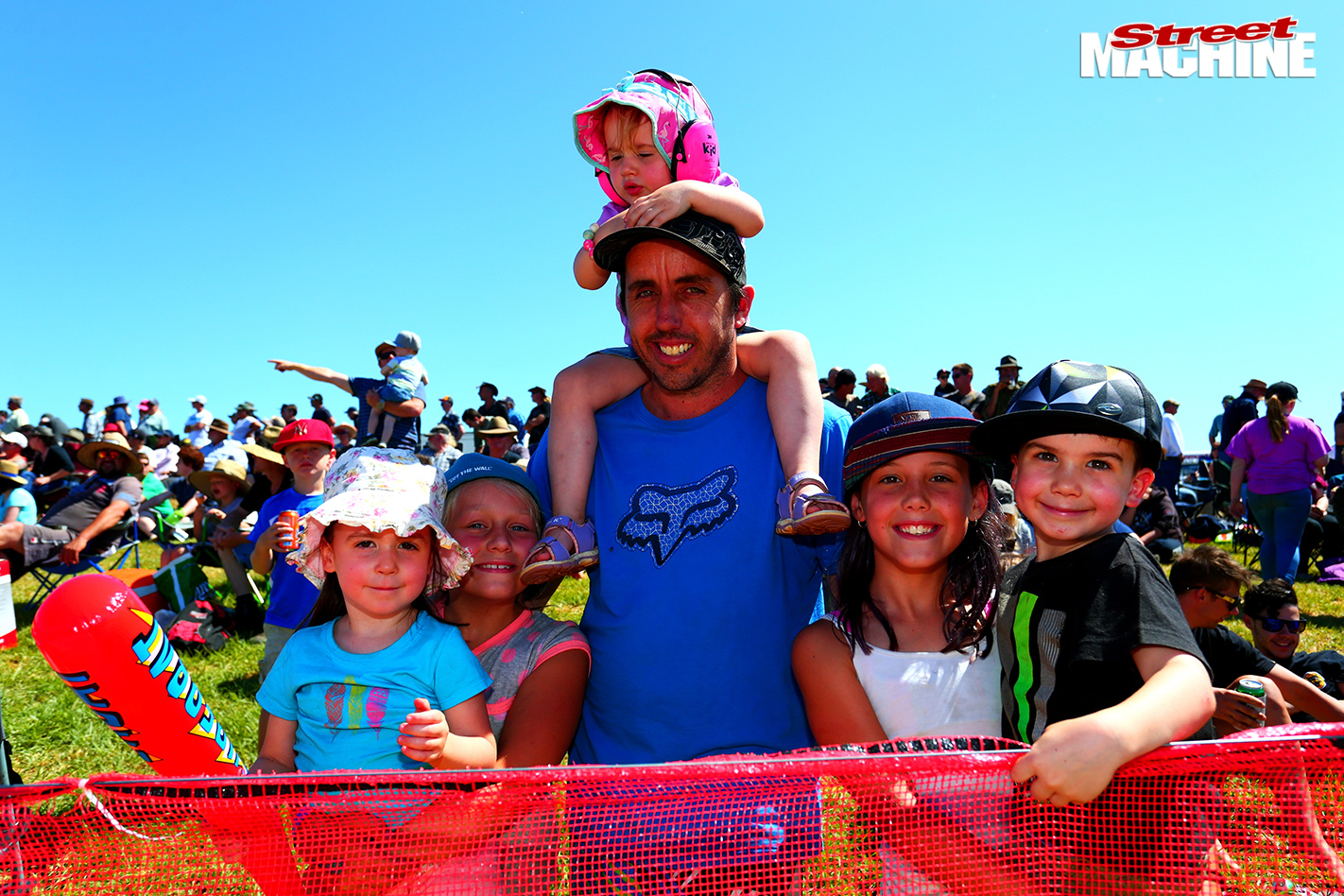 Of course the tractors are only part of the deal; the sleds they pull are just as trick. The mini tractors obviously pull a smaller sled, but all classes work on the same principle in that the drag increases with distance. The big sled has a sliding arrangement of weights that increases the load quite significantly during the run. At the end of each run hydraulically activated wheels swing down and the sled reverses back to the start just like a large truck. In the old days the sled operators sat exposed to the elements and the sled had to be towed back for each run, but these days the sled has its own powerplant and the operator sits in air-conditioned comfort.

So how do they compete? Well each entrant tries to tow the sled as far as they can in each weight class. The course is only 100m long and if an entrant goes past the end of the full course, it’s called a Full Pull. If more than one tractor does a Full Pull, the competitors who have made it all the way have a Pull-Off. No, we’re not making this up. Each run is electronically measured down to the centimetre. 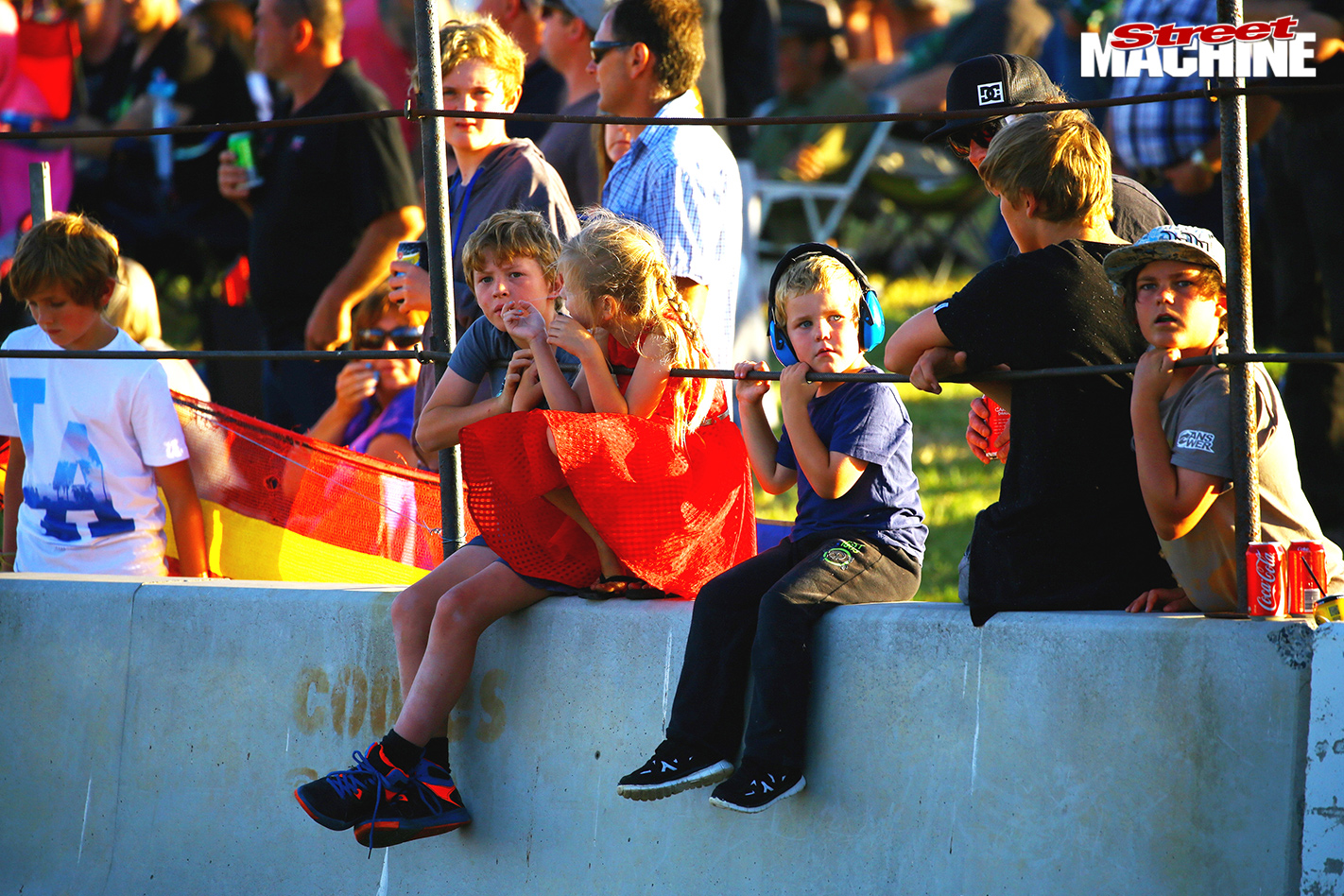 The winner for each weight category – remember each competitor attempts three weight categories in their class – is awarded 30 points and the rest of the field get lower points depending on the finishing position. At the end of the day all the points are added and the competitors ranked from first to last for the trophies. Their points also go towards the national championship.

With Tooradin’s relative closeness to Melbourne, over 4000 people came out to Rutter Park Memorial Reserve to see the big boys and girls play. The weather was perfect, with the ocean breeze from the direction of French and Phillip Islands helping to keep the temperatures down, but there was plenty of dust getting thrown around. So here’s a tip: If you’re going to watch the tractors, you’re going to get dirty.

The next meeting in the championship is at Waaia, north of Shepparton, on 12 March. For the full calendar and more info check out www.austractorpull.com. 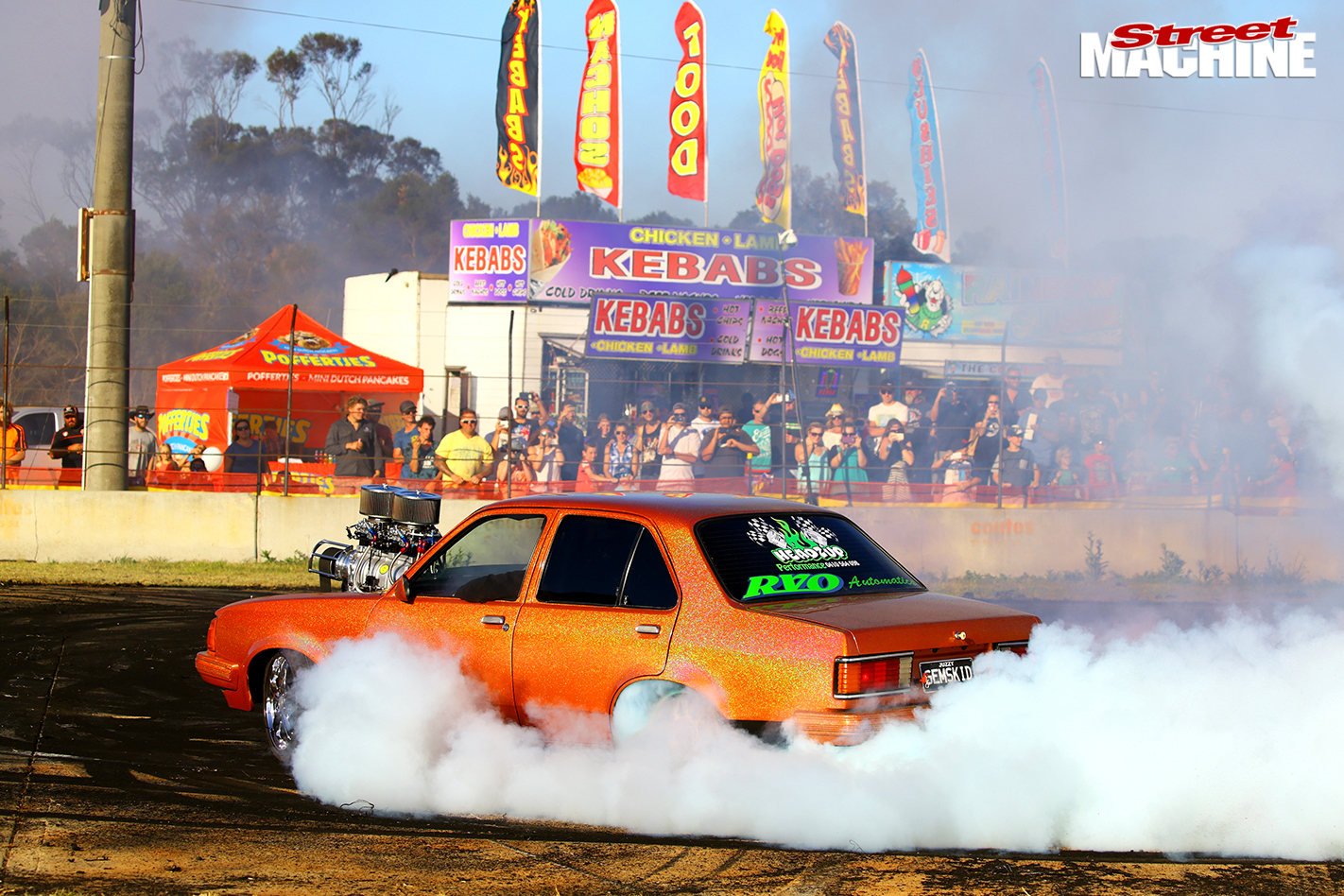 Juzzy Mott put on a show with her 427ci small block-powered Gemini, which had the crowd screaming for more 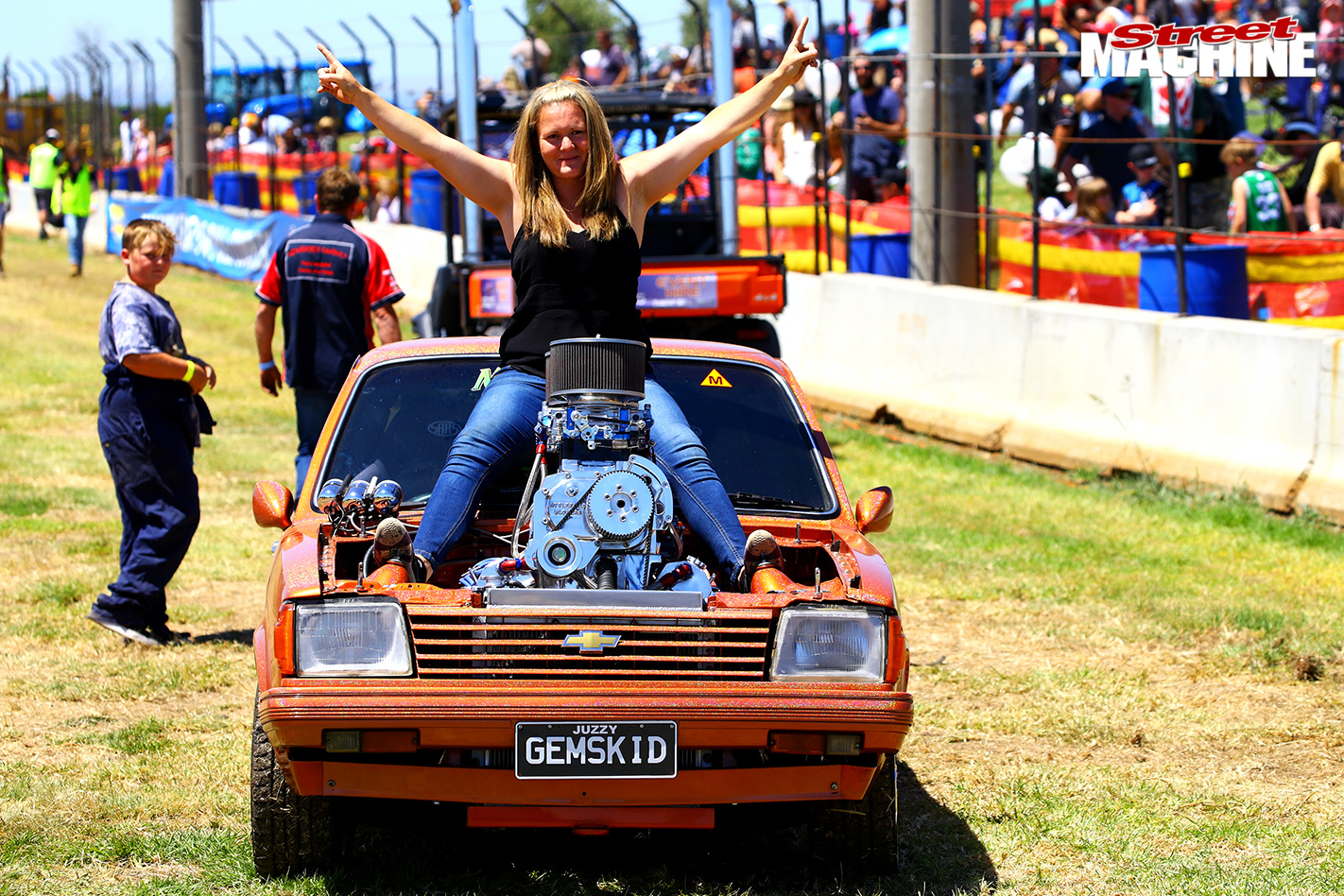 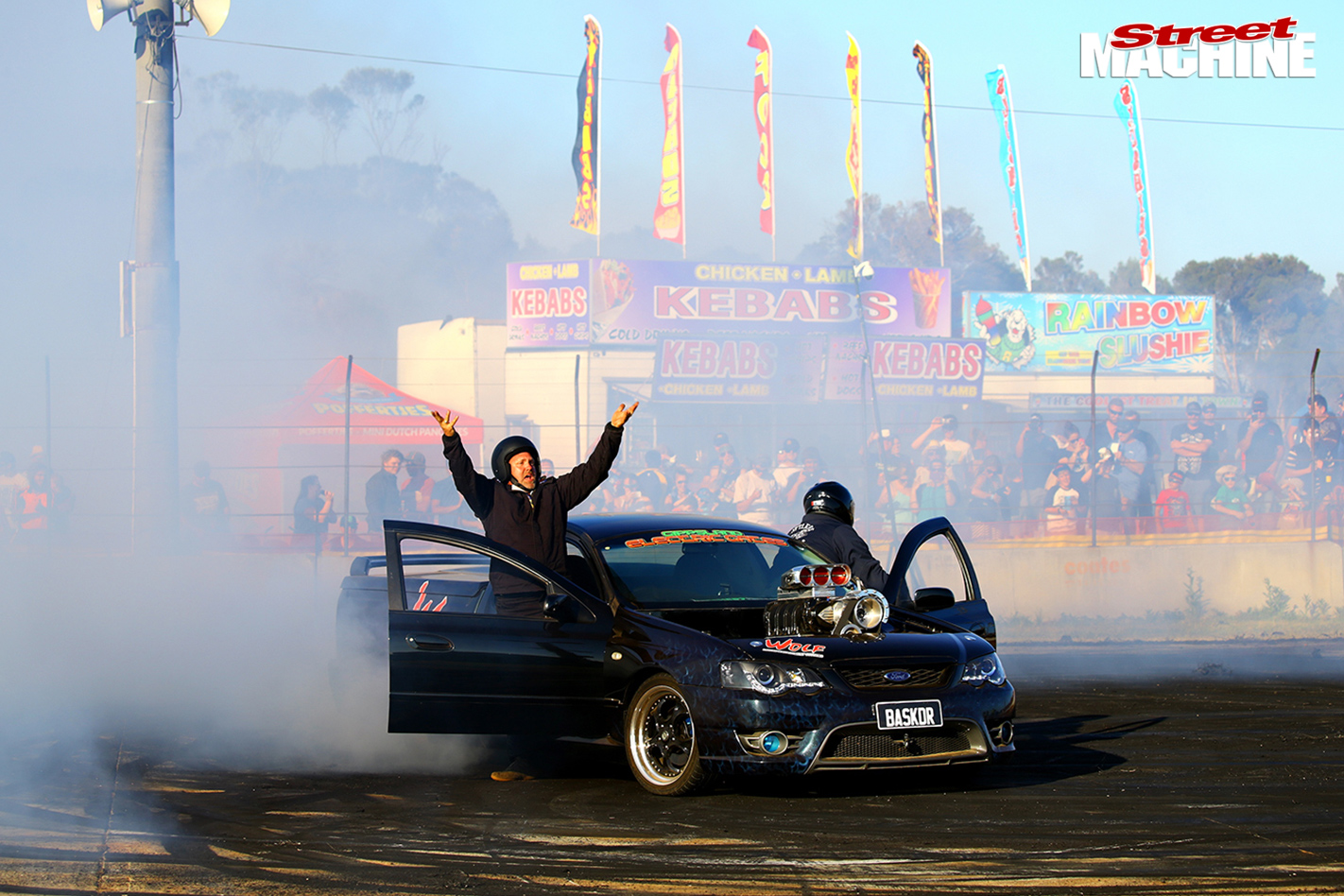 There were just a handful of burnout cars at Tooradin putting on a display, including Darral Earnshaw’s BA Falcon ute. It’s powered by a 347ci Windsor with an 8/71 blower and EFI. The injection is controlled by a Wolf V550 tuned by Mike’s Dyno Tuning 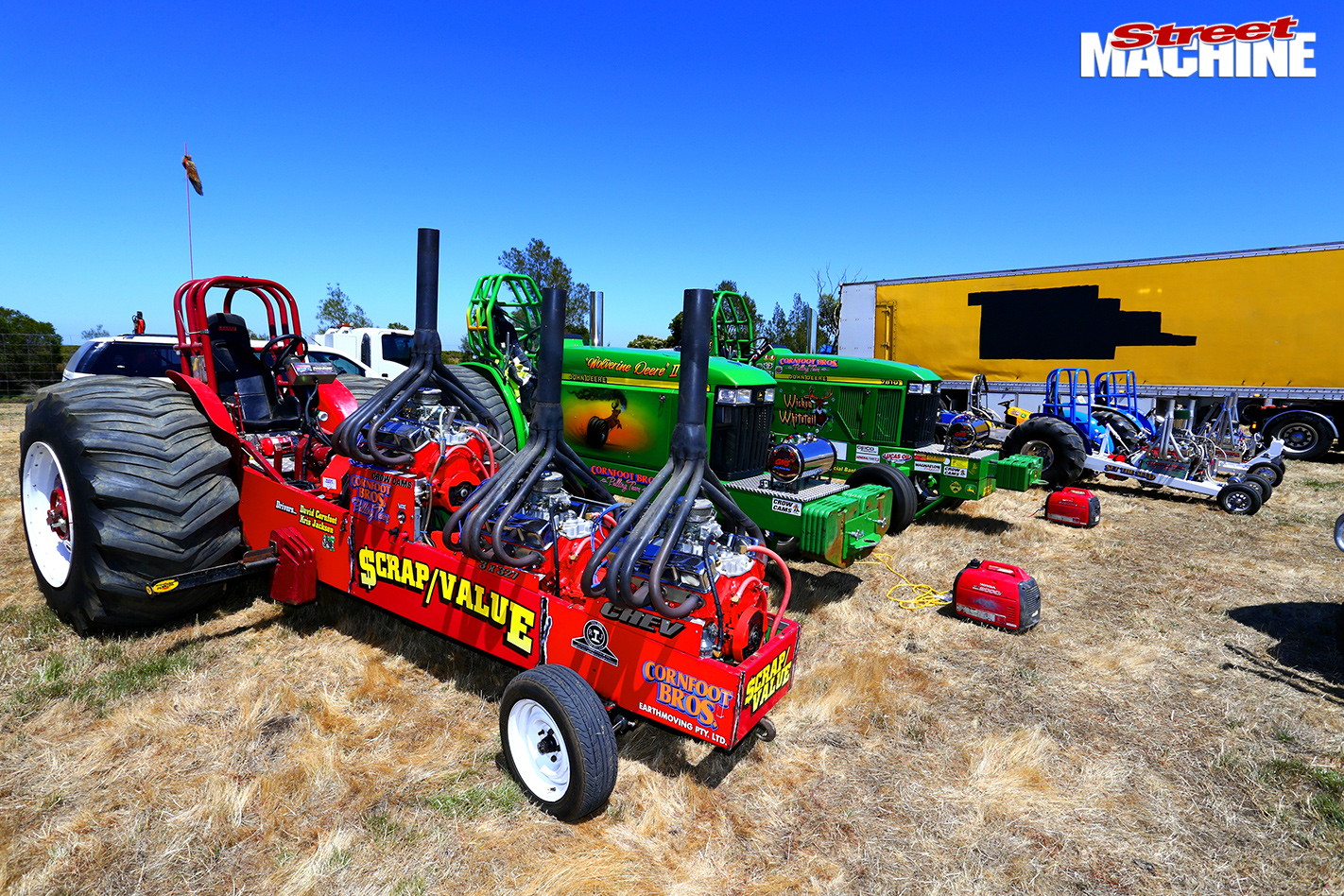 The Cornfoot brothers have a fair team of tractors, ranging from big Open-class brutes through to Pro Stock and Mini Modifieds. Scrap Value uses three 327 Chevys and two Powerglides to get the power down 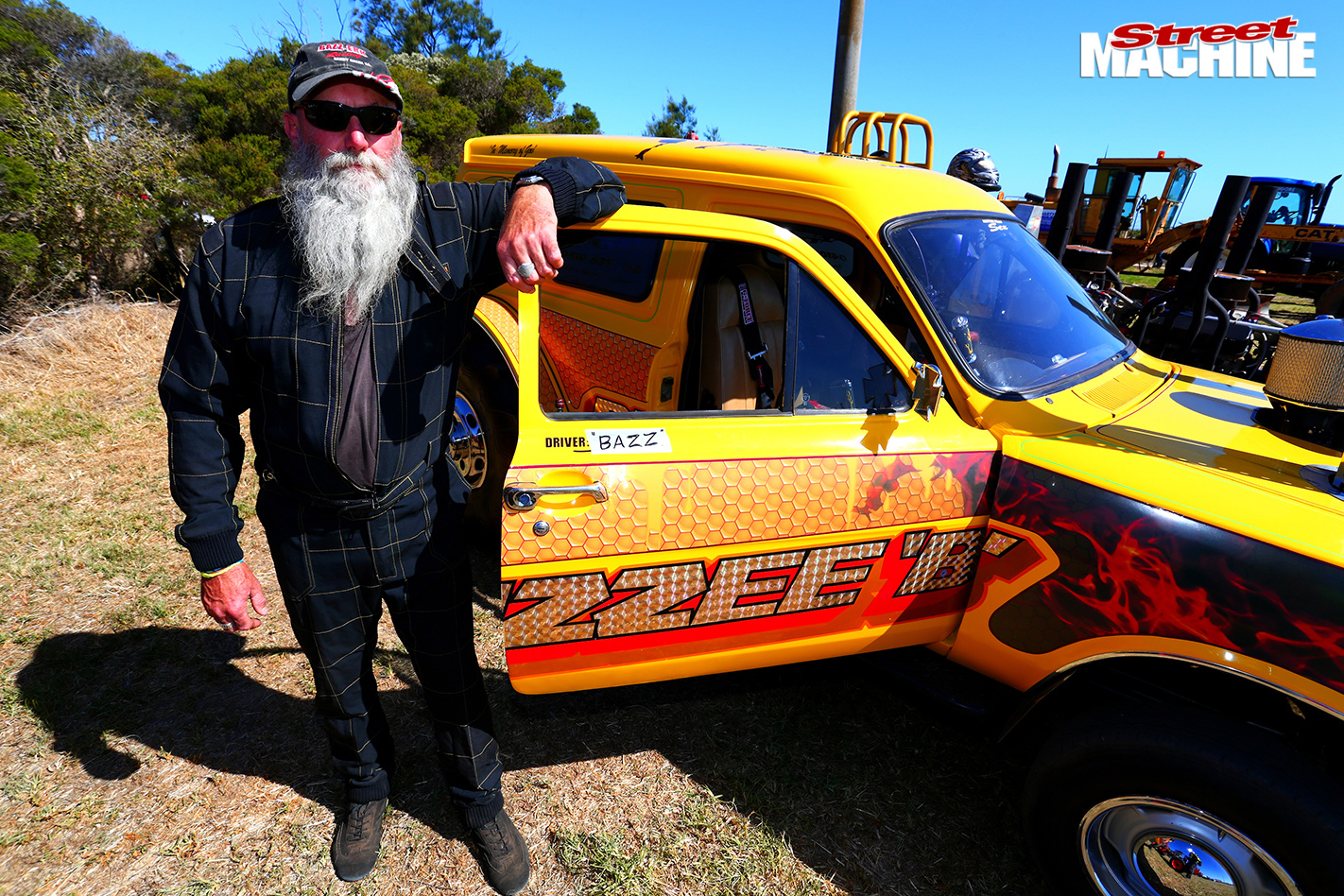 Normally Sue Ward drives the Bizzie B, but Baz was behind the wheel at Tooradin 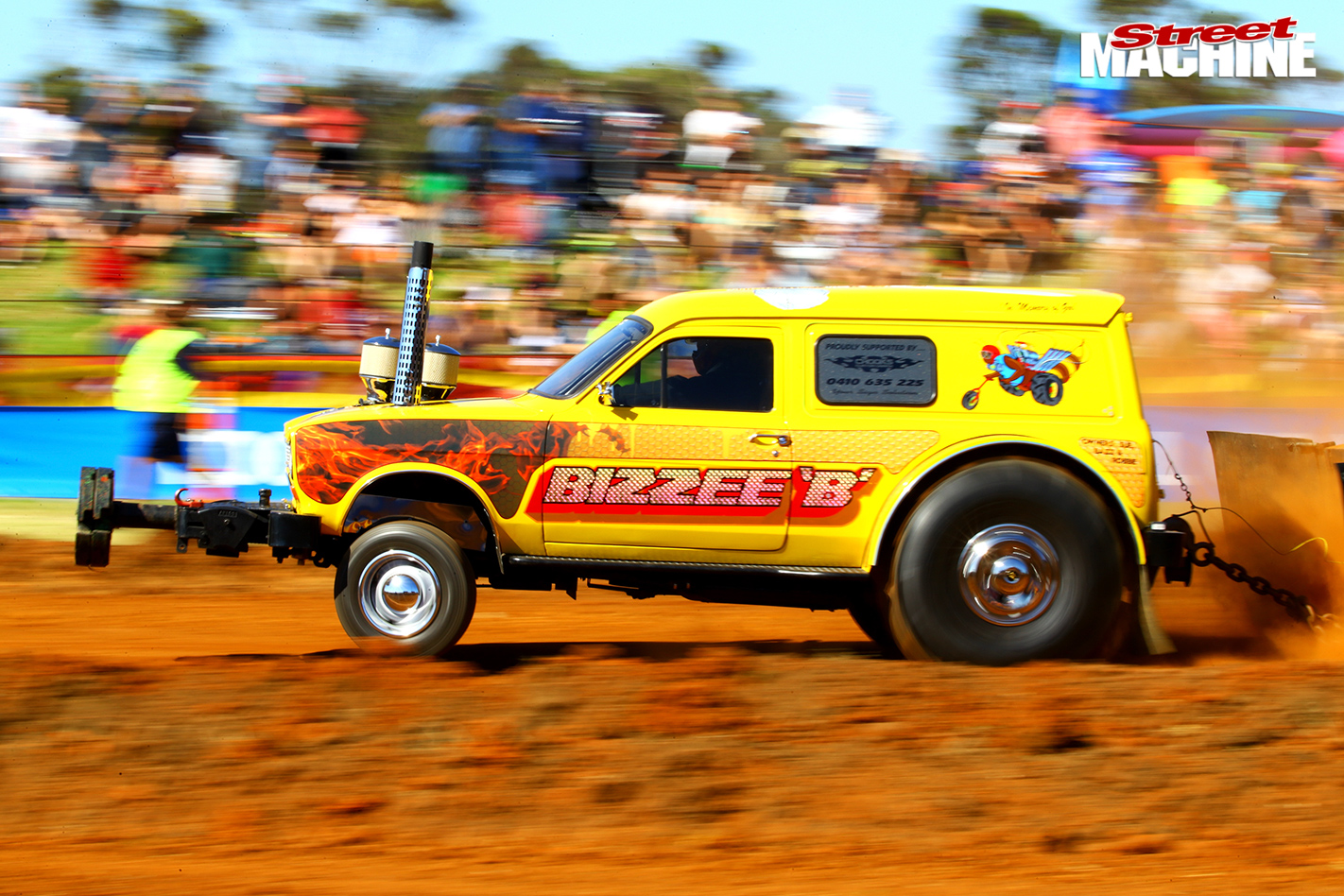 The 1973 Escort van has a tunnel-rammed 350 Chev and Powerglide feeding the power back to a Leyland truck diff, and it competes in the 2WD Modified Truck class 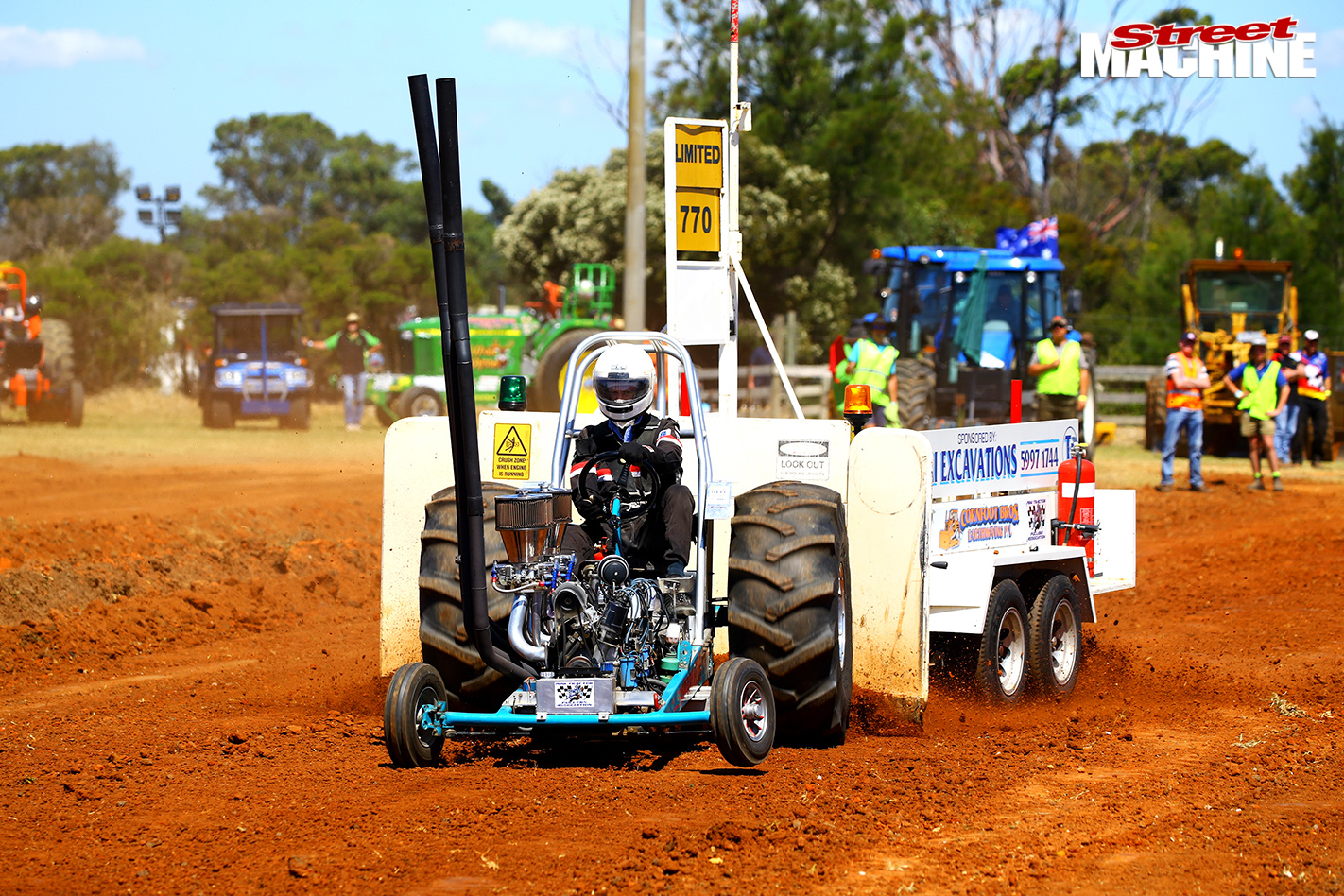 Bob Blackwell's twin 3B-powered Rotary Hoe has been competing for decades and it adds some spice to an almost exclusively V8 affair. The sound of two rotary engines screaming their guts out is quite an interesting tune 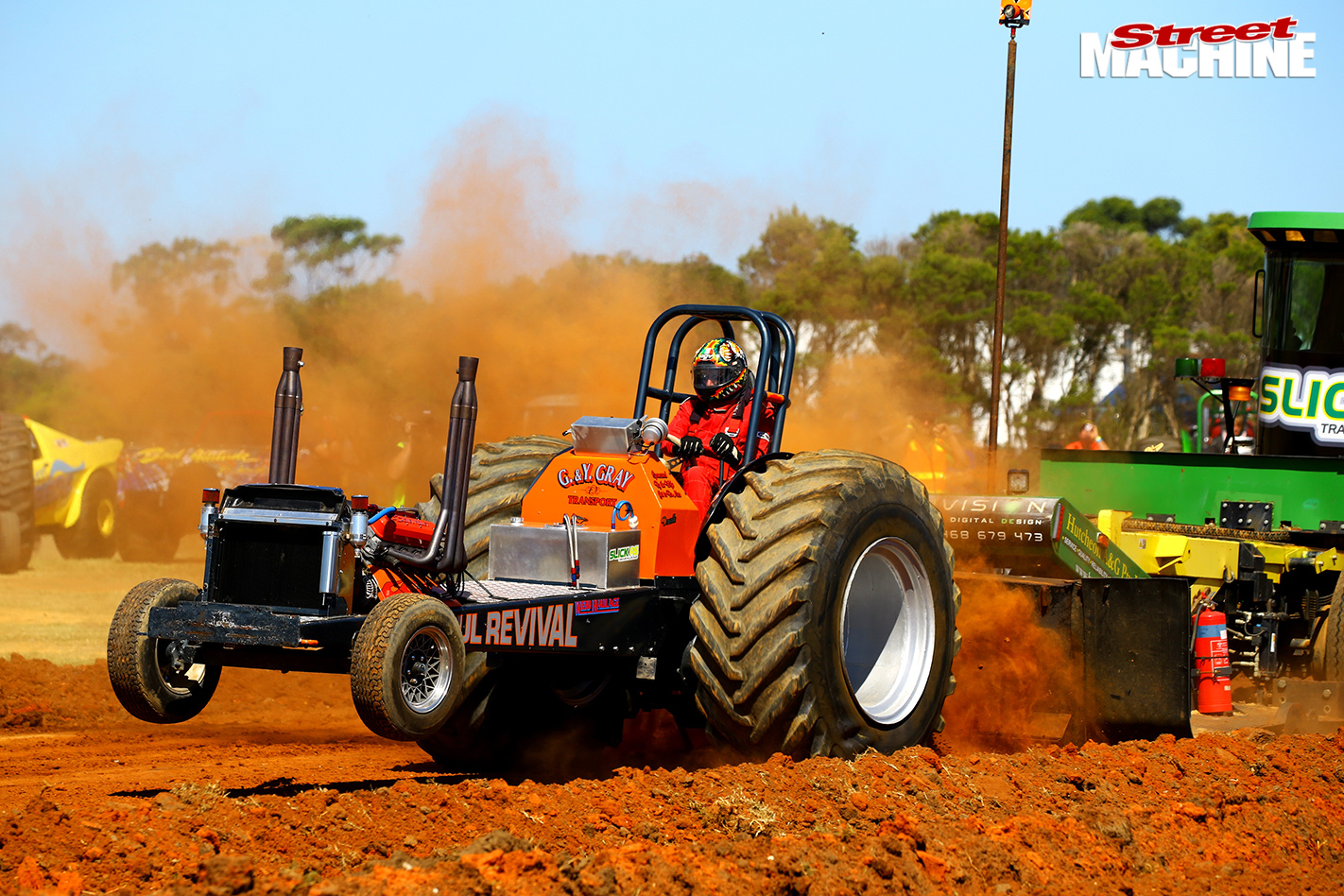 Soul Revival, driven by Graham Gray in the Limited class, was the only tractor with LS power on the day, with a six-litre LS2 sitting up front. Graham's wife Yvonne has her own tractor in the same class 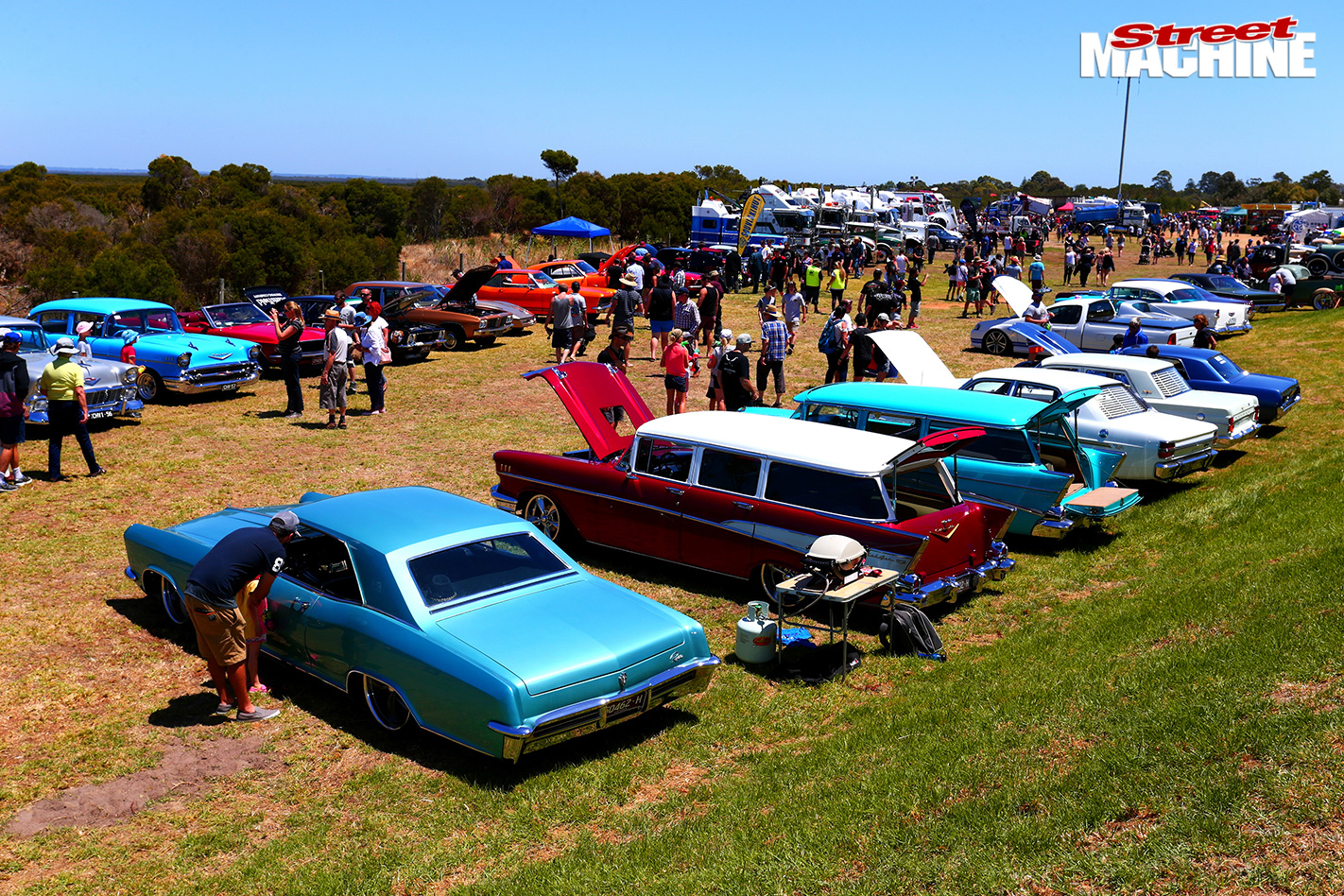 The main attraction didn't start until 3pm, giving punters plenty of time to check out the show 'n' shine, which featured oodles of hot local machinery and more trucks than you could poke a bogie axle at 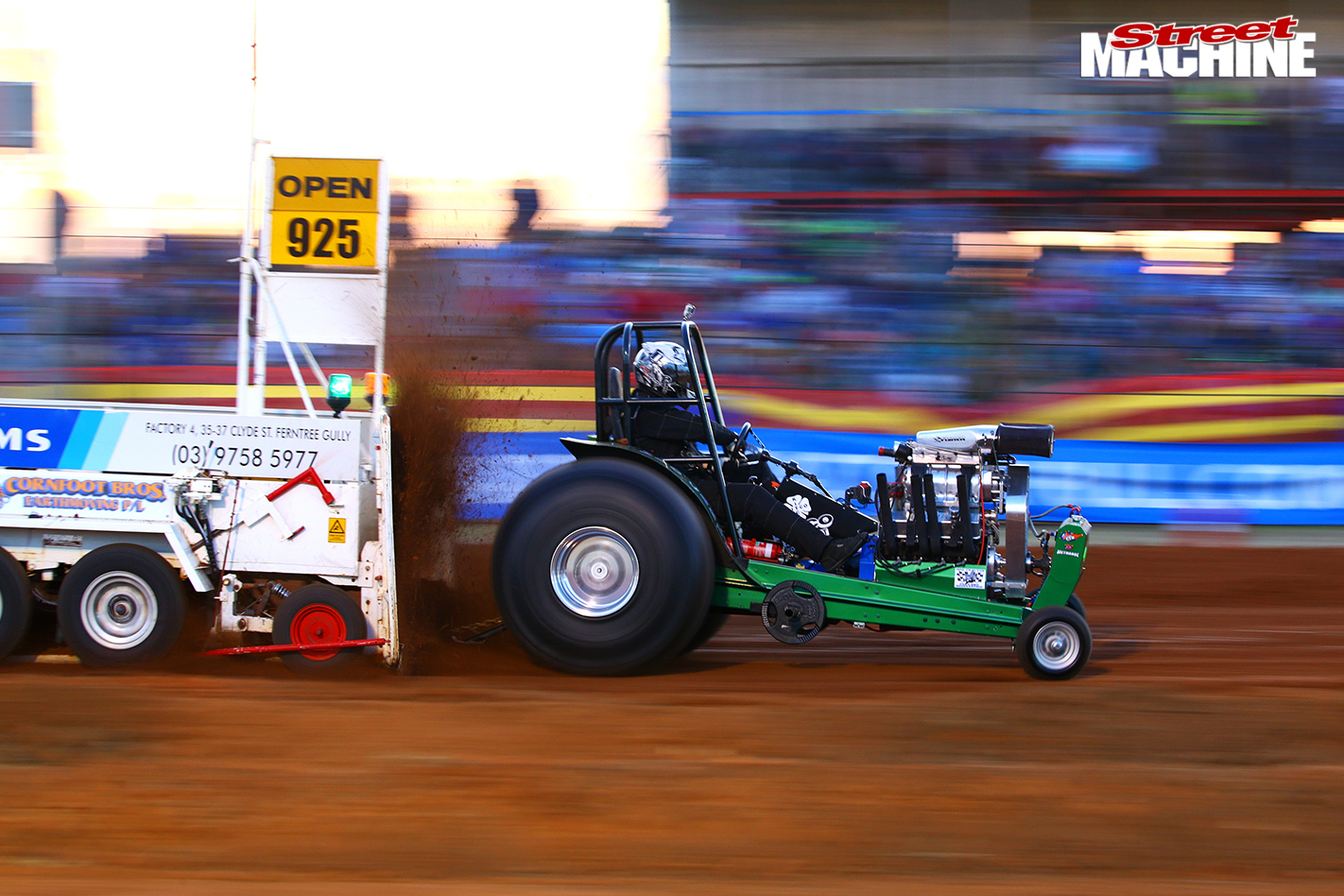 It's not all blown big-blocks in the Open Mini Modified class; Mick Carpenter's Who Cares runs a blown 350ci that's still using a factory four-bolt block. This is his first-season with the blown combo 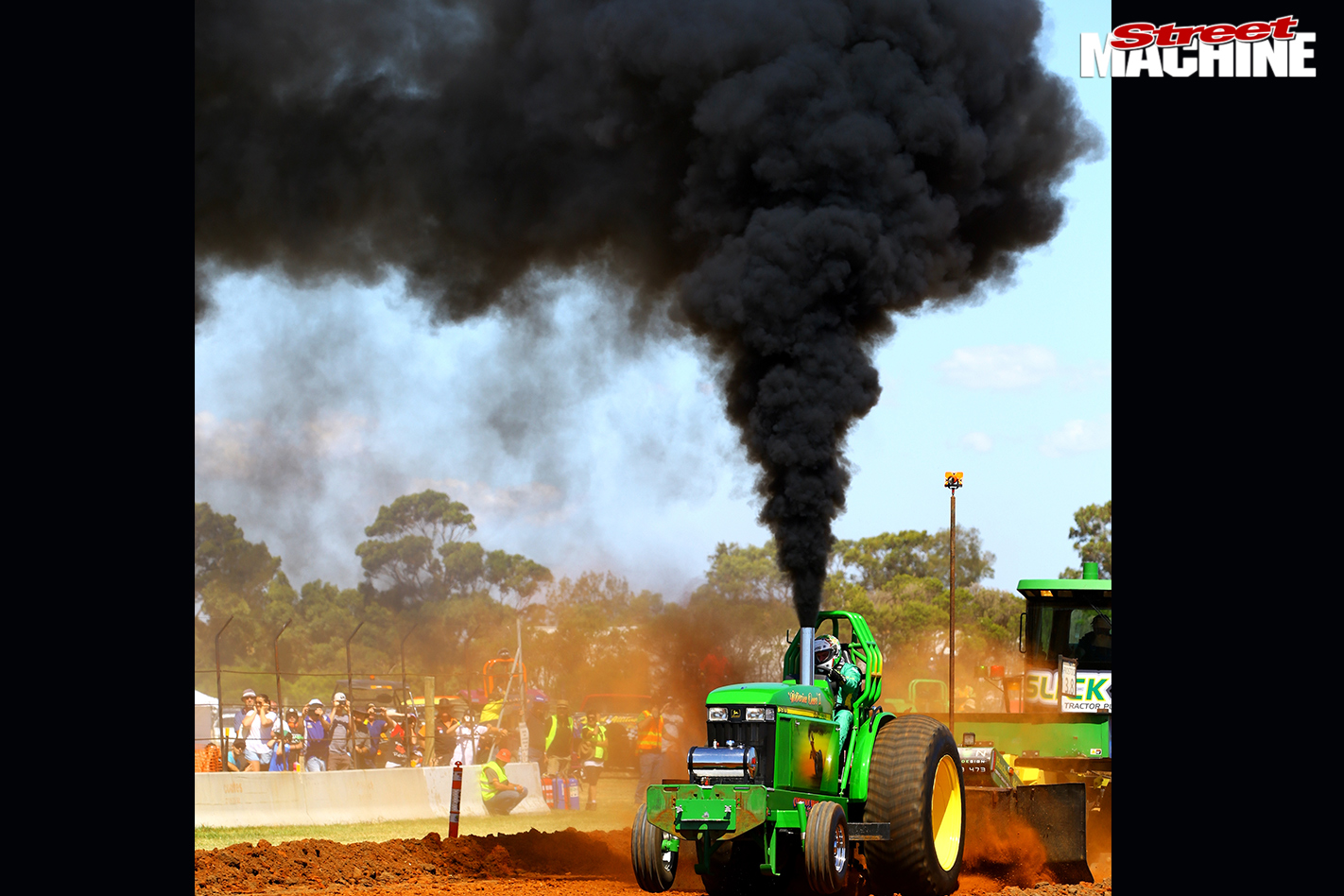 The Pro Stock class isn't going to win any friends with the environmentalists, but they look awesome shooting a thick black plume skywards. Wolverine Deere II pumps 70psi of boost into a factory diesel inline six-cylinder, and pulls like a train 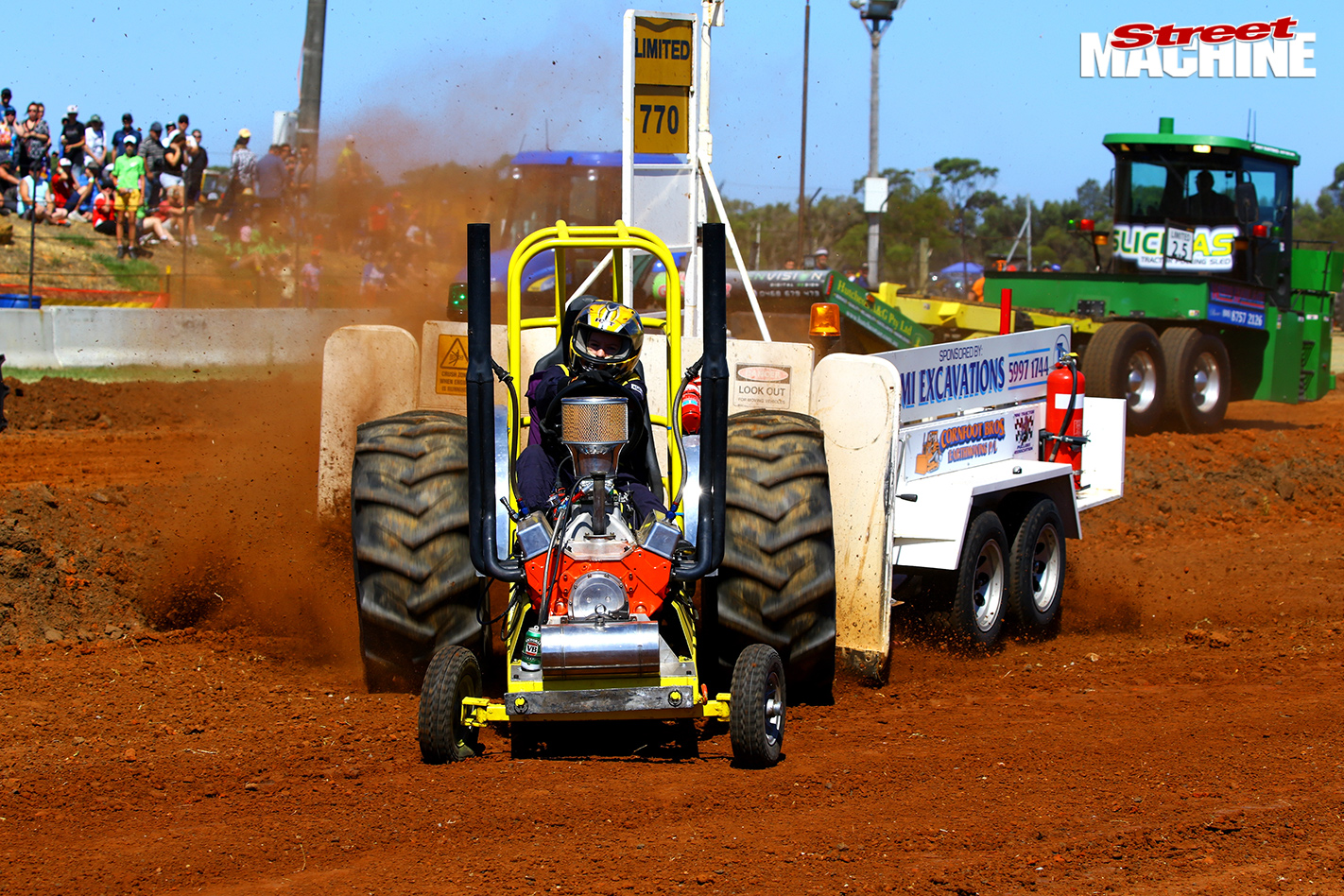 Erin Clancy gets 2 Tuff out of shape in the 770kg Mini Modified class. The tractor is powered by a 350 Chev and Powerglide combo 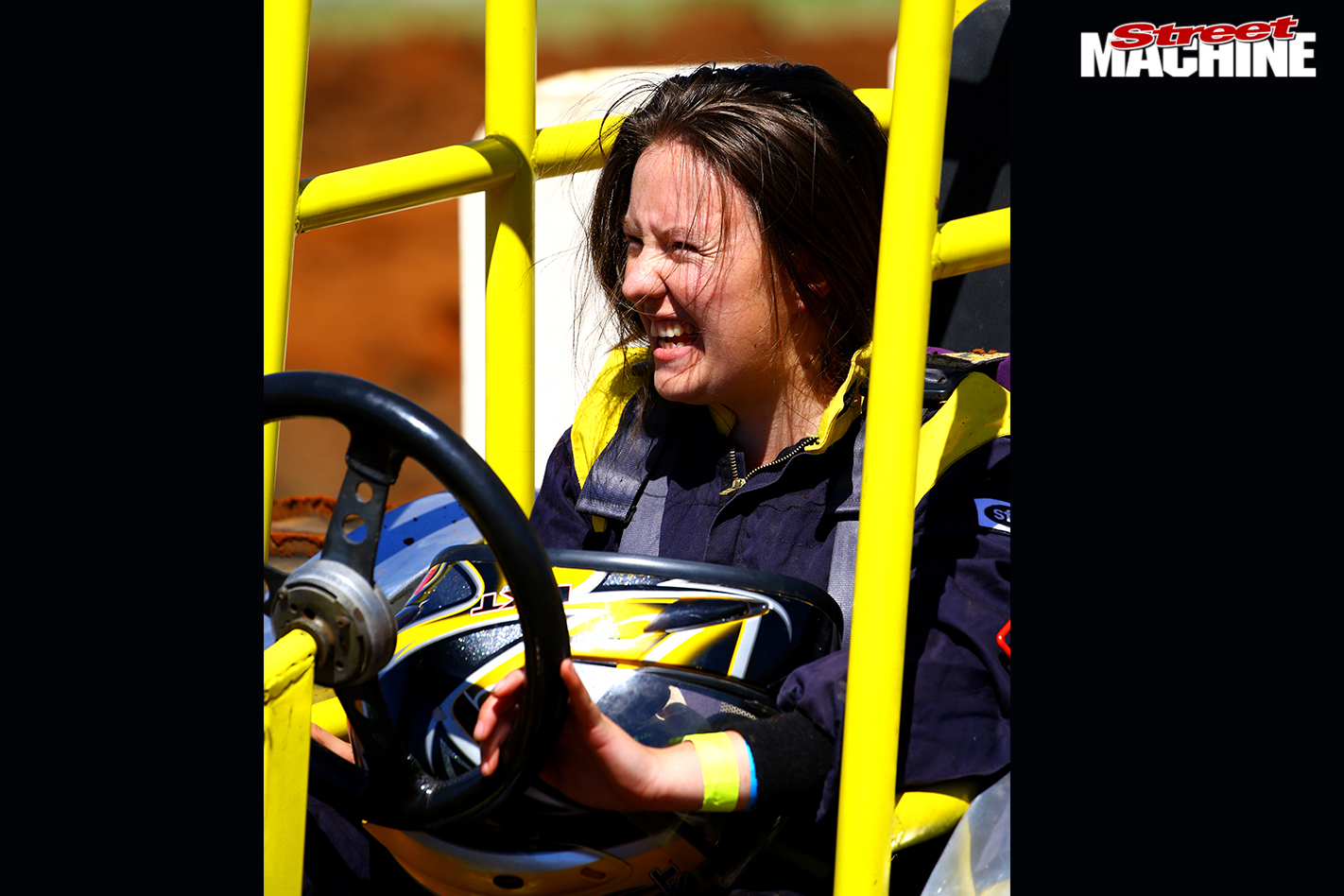 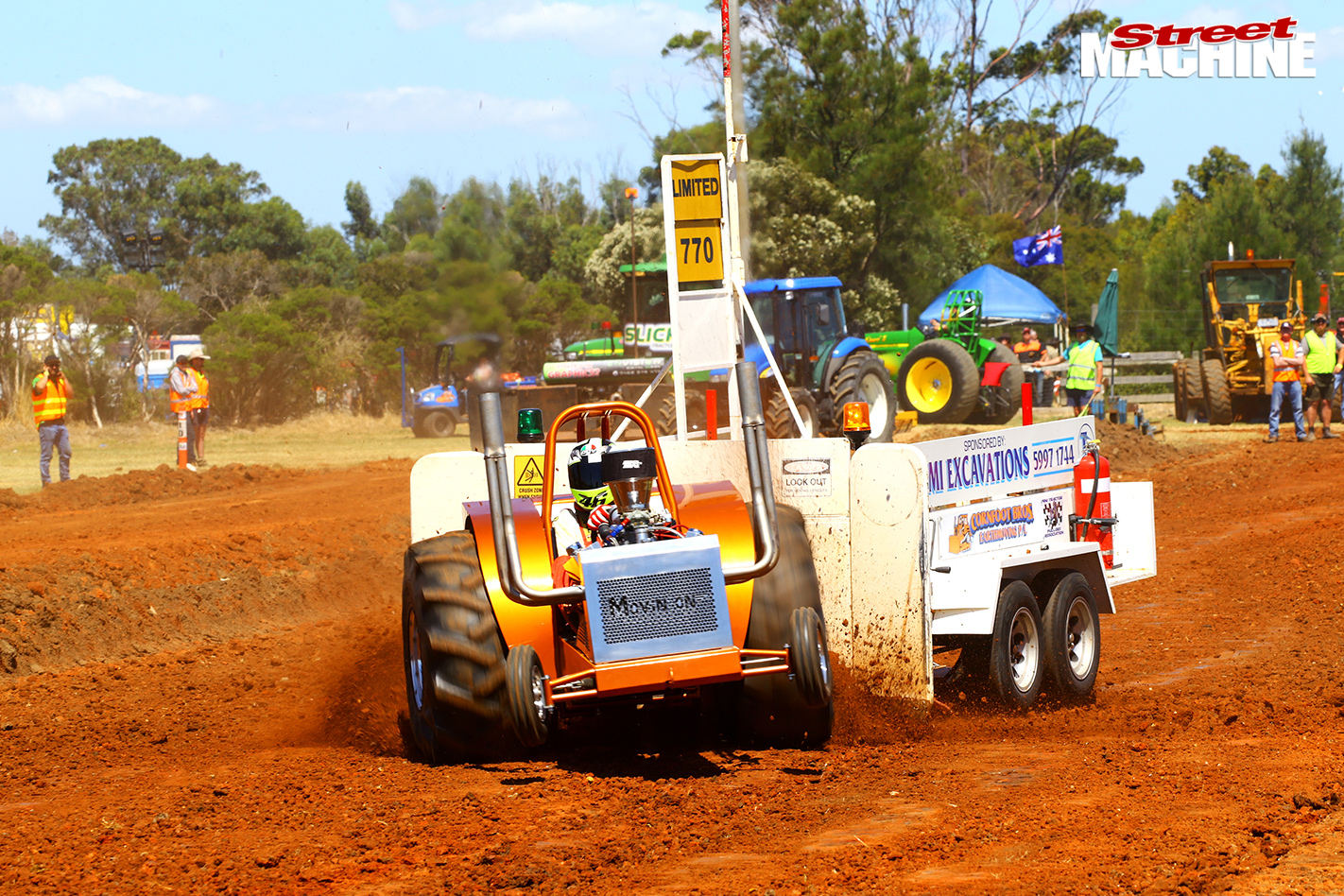 While it's great to see the big boys in action, the lightweight Mini Modifieds are more spectacular to watch. They're light as hell (this one is under 770kg) and have plenty of attitude as they try to put the power down 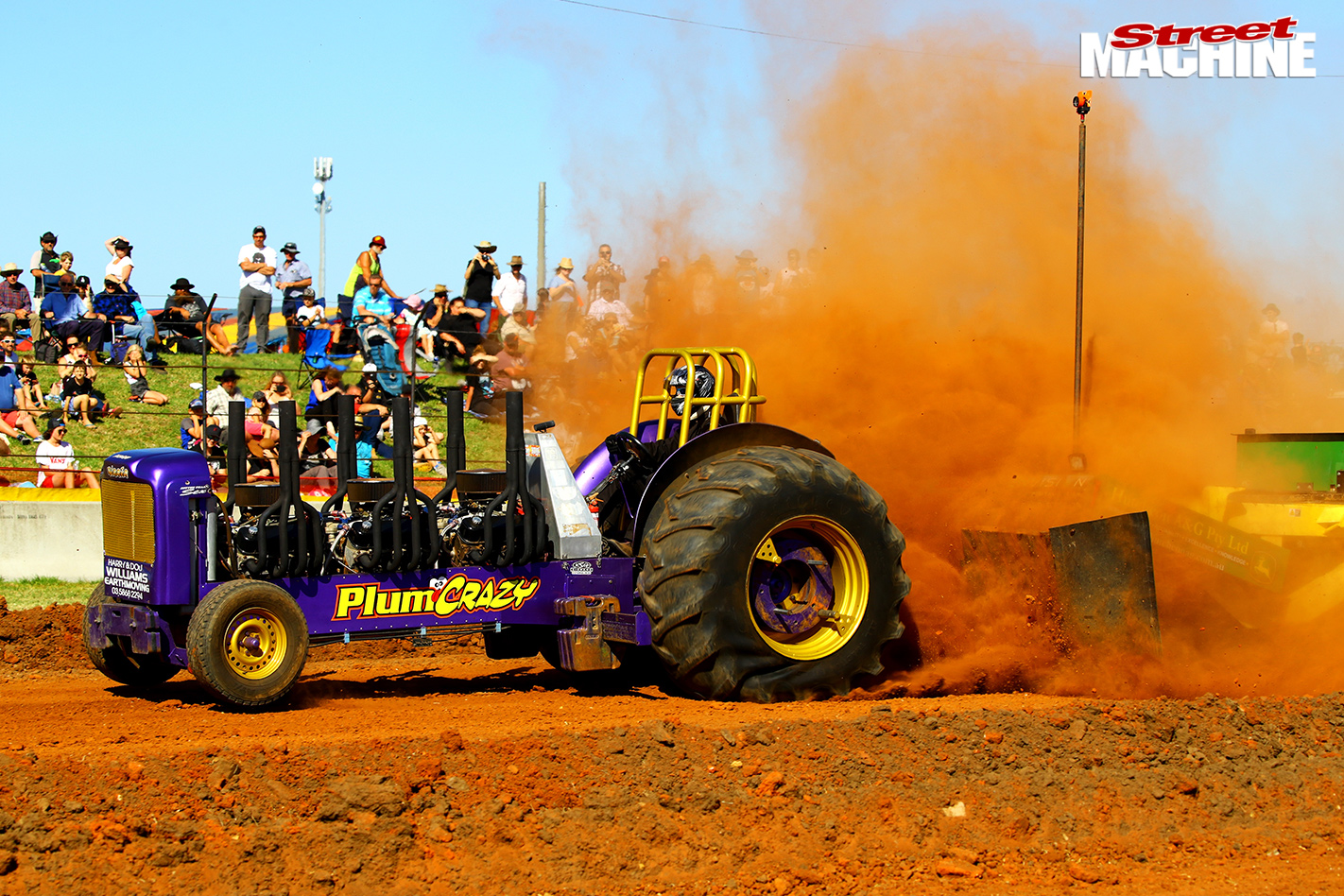 The biggest unit at Tooradin was Plum Crazy. It's packing three 540ci big-block Chevs for a total of 2200-2400hp. There's a duplex chain coupling each engine together, which owner Doug Williams reckons is better than any other method 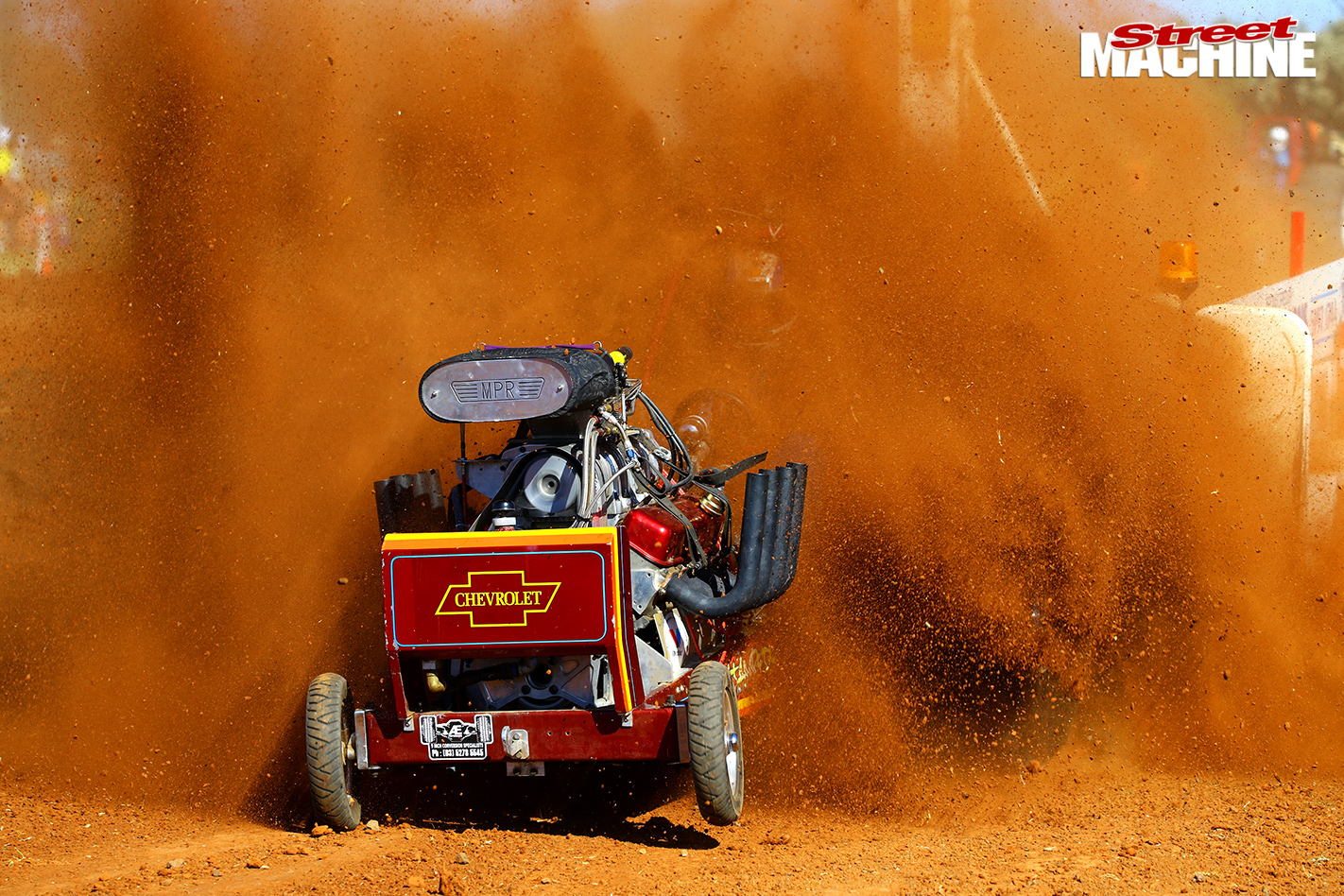 Plenty of dirt gets moved around during a tractor pull. Garry Johnson disappeared into a dirt cloud of his own making, Stampede is packing a 14/71-supercharged 427ci big-block. "It's all pretty tame," he reckons. "The only crazy thing is the bloke sitting in the seat" 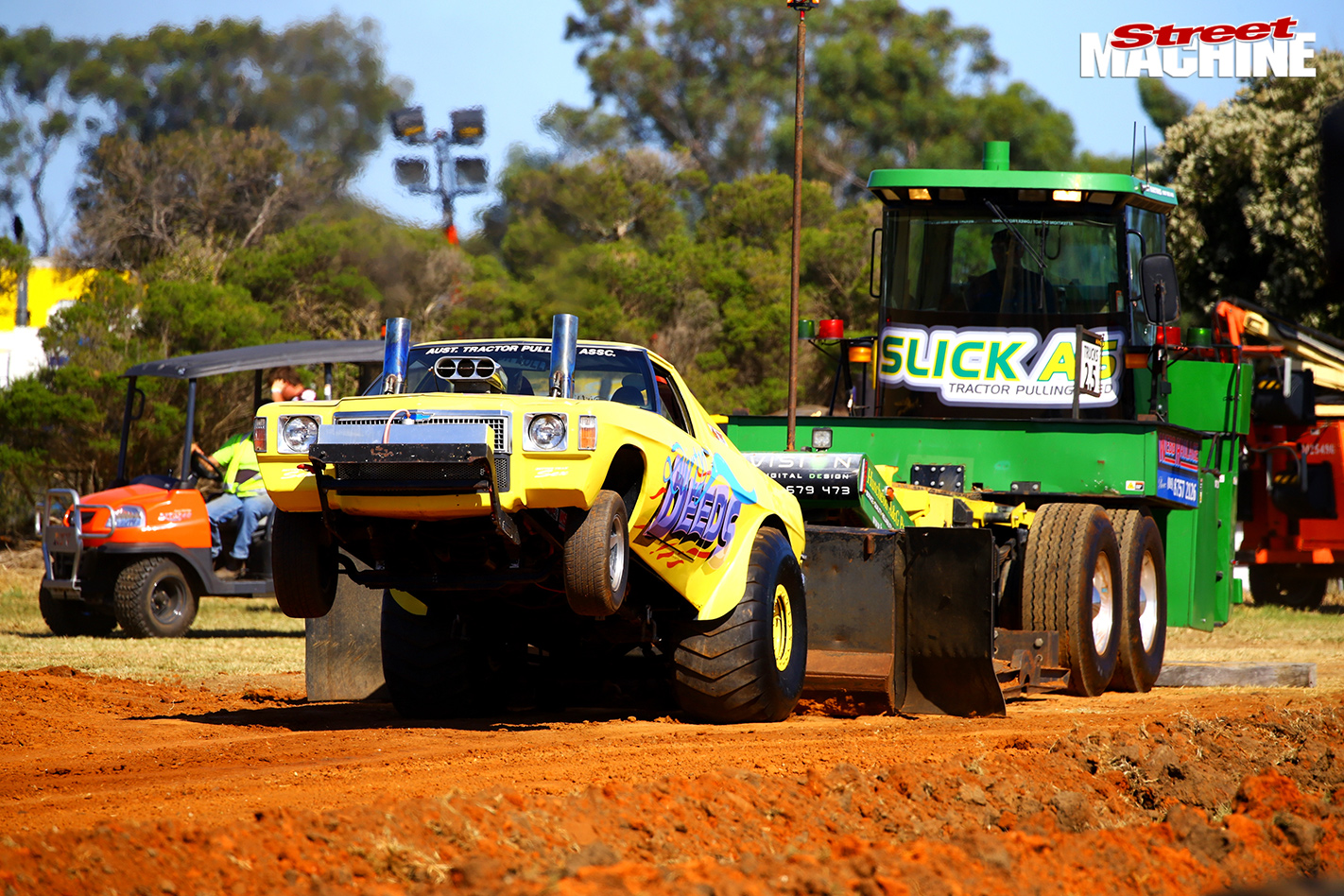 Dirty Deeds has been a crowd favourite for a few years. Driven by Woody from Berrigan in NSW, the jacked-up Holden ute uses a 454ci big-block hooked to a Turbo 400 trans and 10-speed Road Ranger gearbox, which then pushes power back to a Leyland truck differential