THIS year’s Hot Rod & Street Machine Spectacular has proved to be the biggest and best yet, with over 200 cars and more than 40 motorcycles on display. In somewhat of an organisational and promotional miracle, the show organisers have managed to attract some very high profile entrants. The Mooneyes dragster was there on its final stop of a three-show visit to Australia, which means Chico and Shige’s frequent flyer miles are finally going to return to normal. They were also instrumental in getting 'Master Peace' to the show, Kengo Kimura’s custom Triumph motorcycle – a stunning piece of design and fabrication. Shige is pictured here checking out the Moon exhaust tips on SM snapper Brad Miskiewicz's Harley. 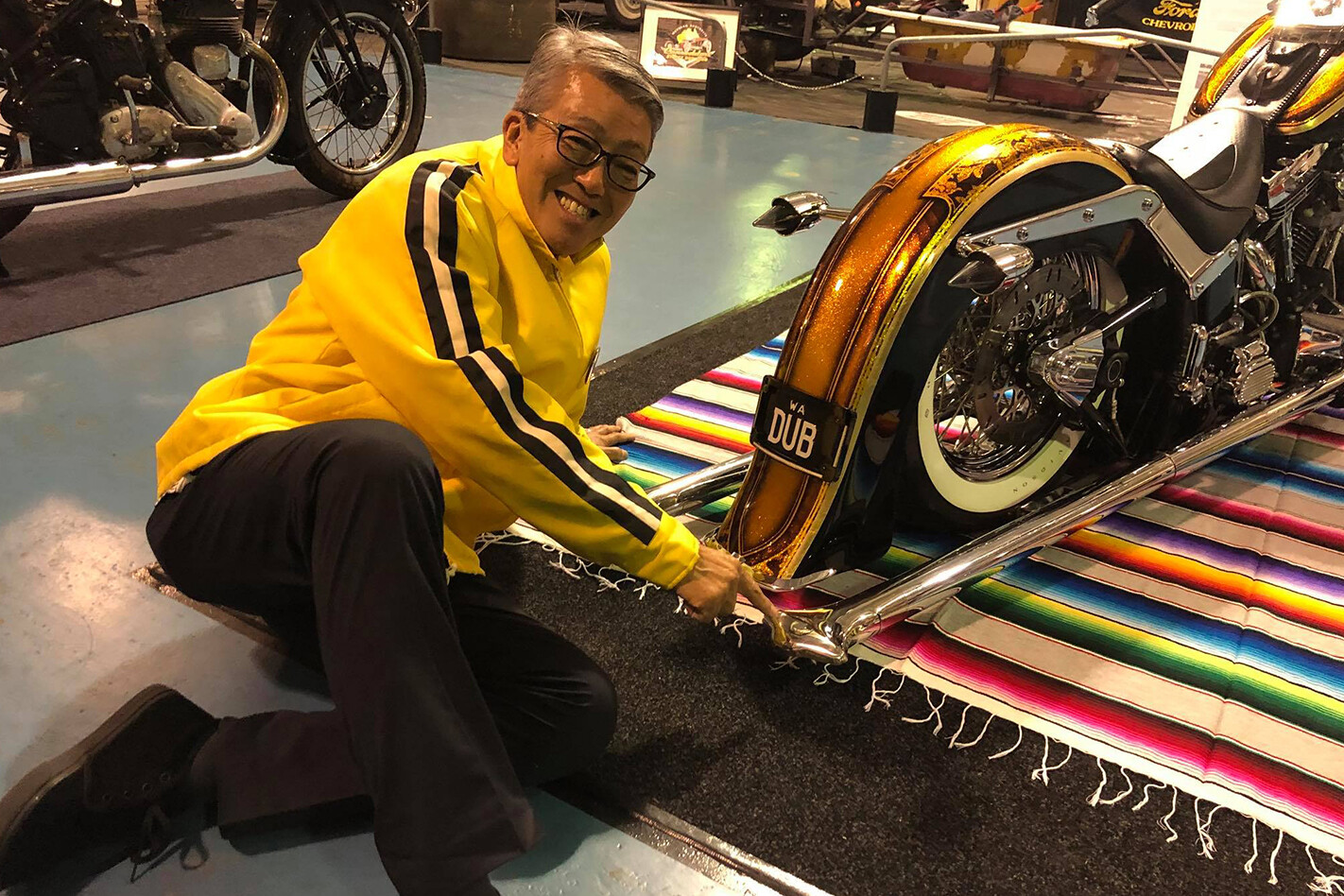 Apart from the international visitors, there was also some pretty amazing local stuff on display including Rosco McGlashan’s rocket-powered Aussie Invader 5R, a missile on wheels that he hopes will propel him to over 1000mph. It is without a doubt the biggest vehicle that’s ever been on show at almost 50 feet (16m) in length. 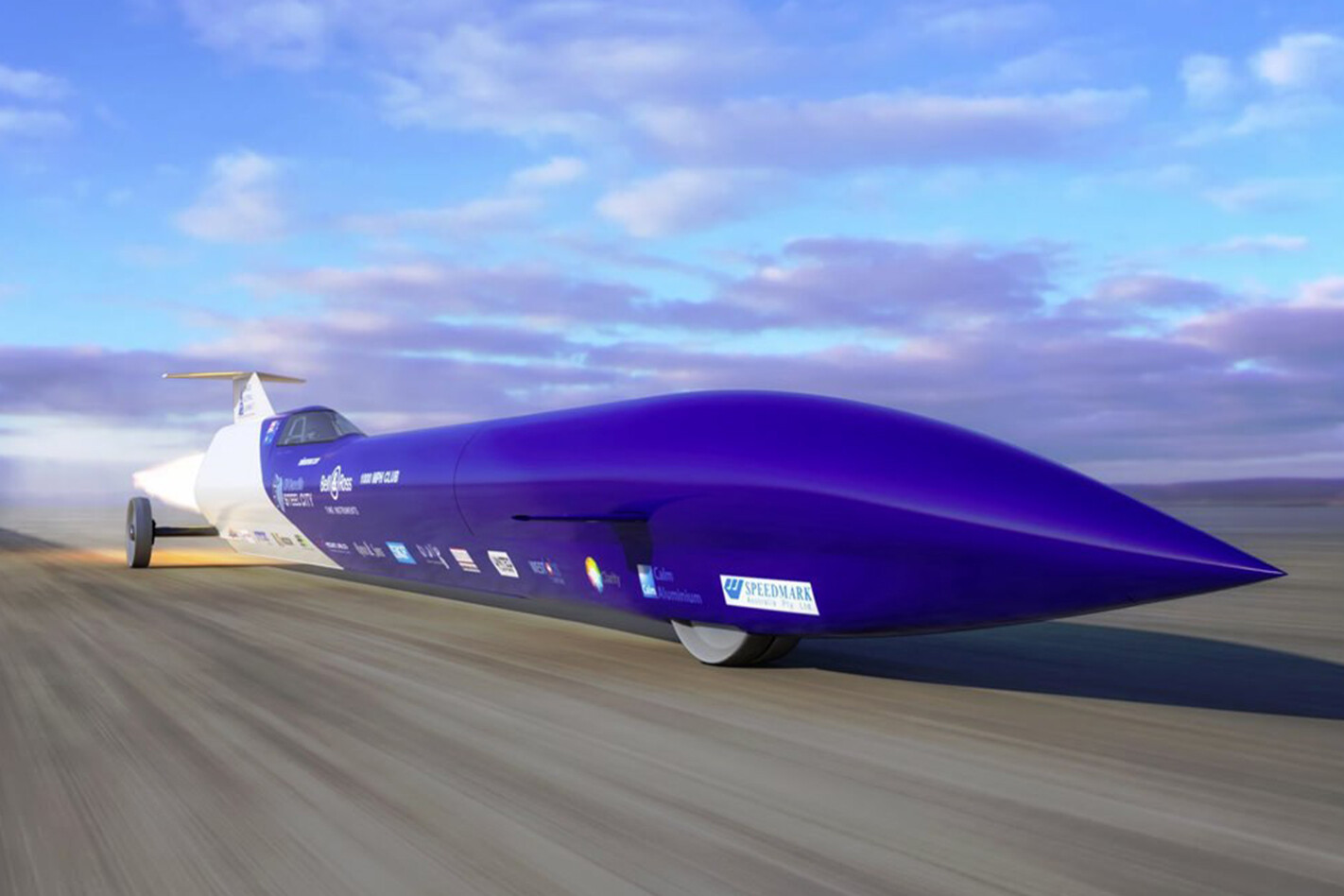 Then there’s the Batmobile, the cool one from the 60s TV show, that is as close to an identical replica as you will find anywhere – except it’s right-hand-drive. 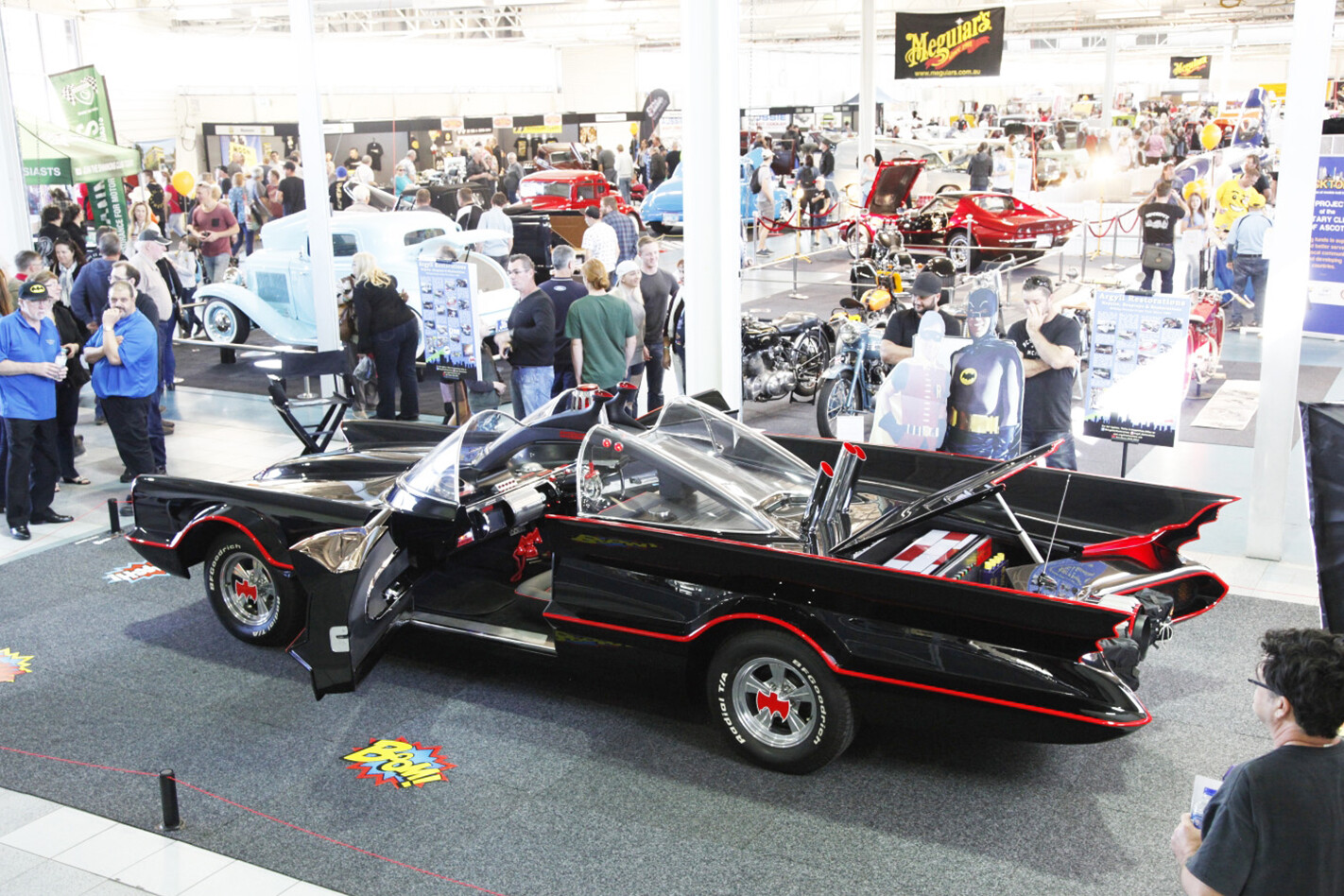 Here is my Top 10 from day one, but that might change when I head back for day two.

SM photographer Andrew Goodwin has been pretty busy in his shed turning his newly acquired ’64 Galaxie 500XL into a bit of a lowrider thanks to a pretty wild panel, scallop and lace job on the roof. All it took was a few buckets of metalflake, miles of masking tape and a set of airbags in the rear. Job done! This Batmobile replica is a wonderful recreation of one of the most popular TV cars of all time. It’s fastidious in its detail and owner Andrew Cox can point every single one of them out. It’s been a massive hit, featuring on Today Tonight and bringing a smile to everyone who walks past it 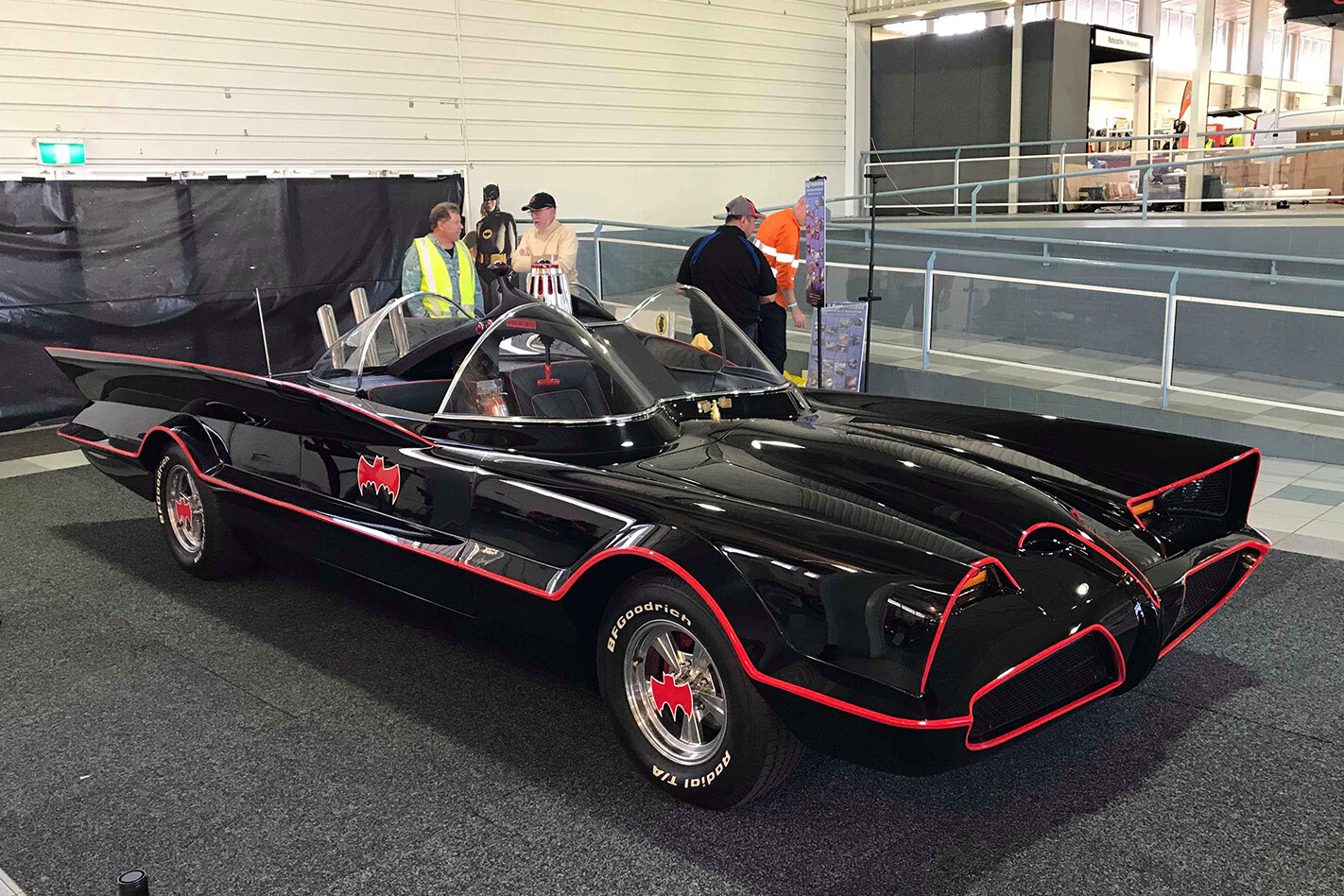 Yep, Mickey Thompson’s Mach 1 Mustang is living in Perth and has been beautifully restored, right down to the hand-lettered signwriting by Paul Scully from Star Signs. New owner Greg Dale has done an amazing job and as amazing as it is to see on the show floor, I can’t wait to see it make a pass down the drag strip Daniel Axisa’s ute is just a super clean and tidy example of a street machine. It’s nice to see a Holden V8 still in there and you won’t find too many as nicely detailed as this one. The large-diameter GTS rims update the car and keep with the improved factory vibe of the car 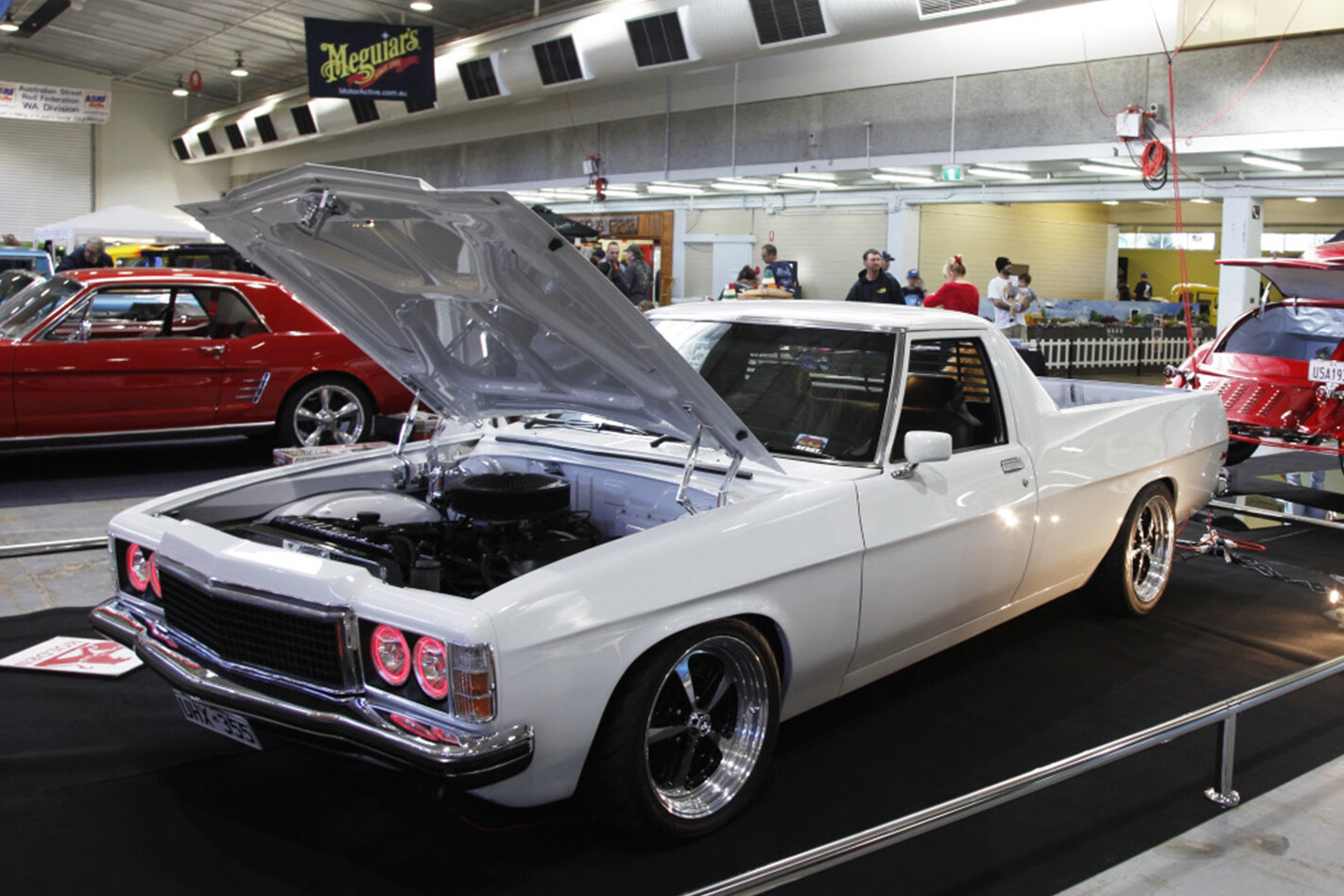 It’s tough to go past a candy apple red Corvette Stingray. This beautiful ’72 model belongs to Geoff Haley and looked stunning as the afternoon light bounced off the mile-deep paint that was applied by Sam Hawkins of Awesam Paintworks. The polished up factory rims look killer too This may well be my favourite car at the show. James Wolter’s ’51 Chevy pickup might look like poop on the outside, but underneath and inside it is absolutely stunning. Running an LS3, 22-inch Intros and with a mountain of work in the chassis by Clint Di Giovanni at SRM, this thing is slammed and all levels of bad arse Tom Mangione’s super-sweet ’34 coupe is a recent import from Victoria, although, with its left-hand-drive configuration it may have come in from the USA as is. Either way, I dig it. Great stance, neat SBC engine detailing and a pretty cool interior – thanks to air con! 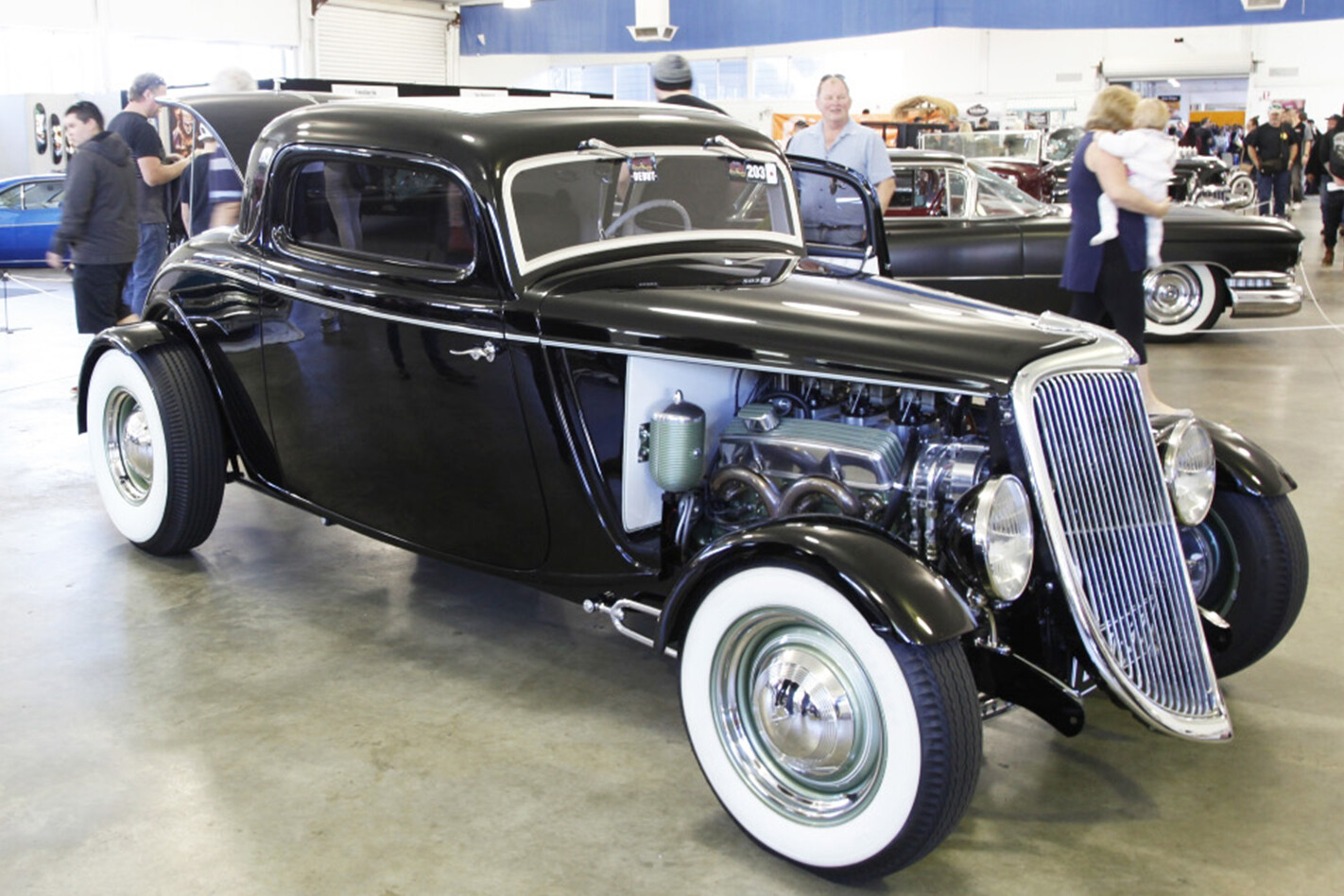 Rob Winsall’s Improved A roadster is yet another killer car out of the Knights car club. It might look pretty mild with its cute little twin-carb flathead, but this is built! Rob has taken the flathead about as far as you can, and I can tell you, it’s one nasty sounding mofo. Measuring up at 304 cubes, it’s gets the old girl scooting along nicely This Model A tudor has been around the traps forever, in fact, I’ve got photos I took of it some 20 years ago looking exactly like this. I liked it then and I like it just as much now. Owned by Eddie Roberts, it’s one of the first hot rods I’d seen that had a mechanical injection set up that had been converted to EFI 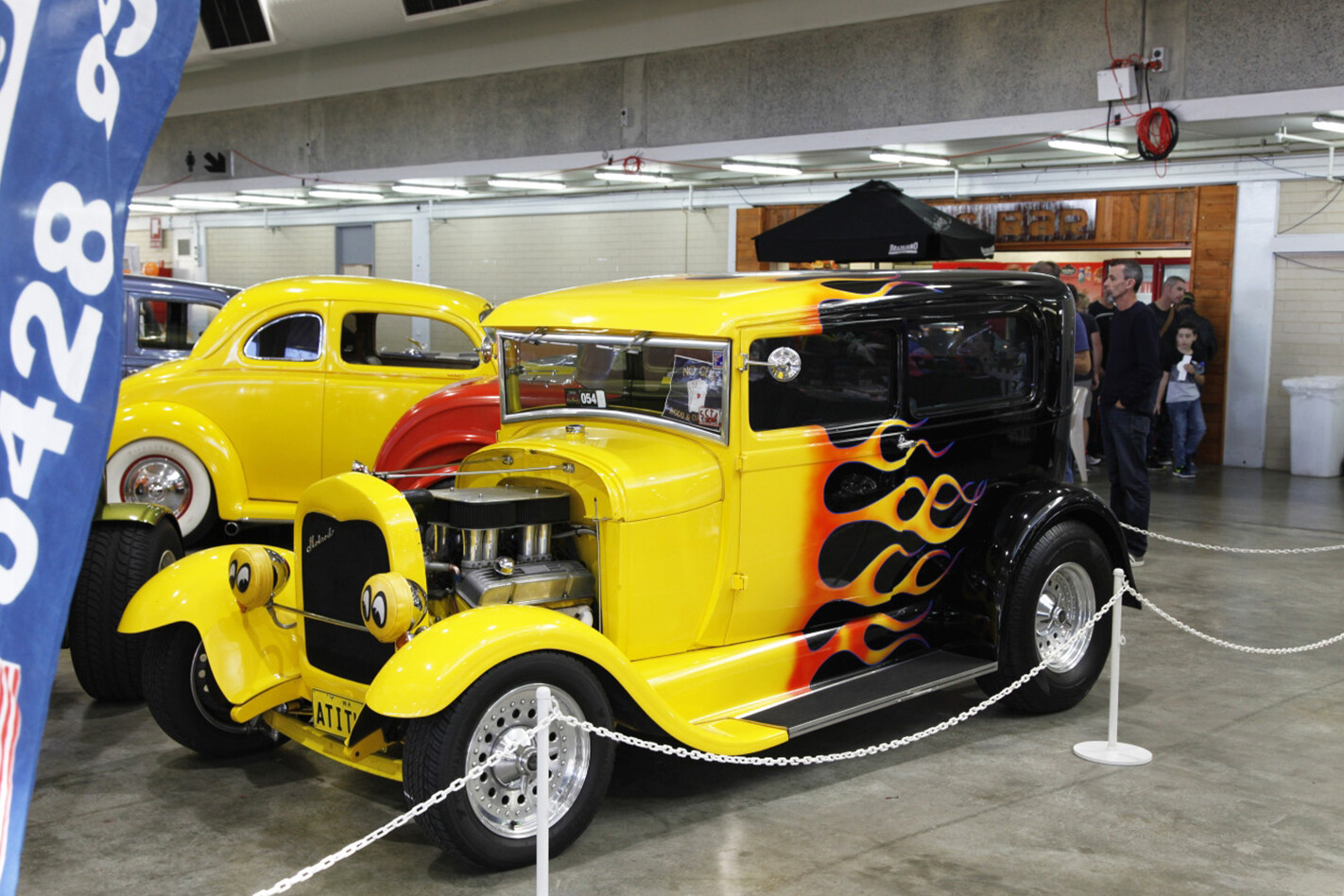 But number one on my Top 10 list has to go to the smile on my daughter’s face after I showed her the pinstriping and flowers that Travis Corich from Pin Head Kustoms painted on her ukulele. Travis is part of the cool goings on in the Koolsville section of the show, which features market trade stalls selling vintage clothing, tattooists and a fully licensed bar. I think I know what I’ll be doing later on