I drove through the early morning along the patchwork desert tarmac, sipping my terrible coffee. California's iconic Joshua trees whizzed past as I eventually joined a cavalcade of those dedicated to going fast with a capital F. We reached our destination, and going through the official gate we made our way onto the sand. Here I got my first taste of the hallowed ground of El Mirage Dry Lake. Literally. My window was down and as a jacked-up dually sped past towing a 15-foot long land speed rocket, I copped a face full of dirt. Still, it was better than my coffee.

As the fine dust kicked up all around, each car disappeared in plumes and before long I was on my own, accelerating (accidentally, I swear) across the lakebed, aiming for the feint outline of the caravans I could see in the distance. 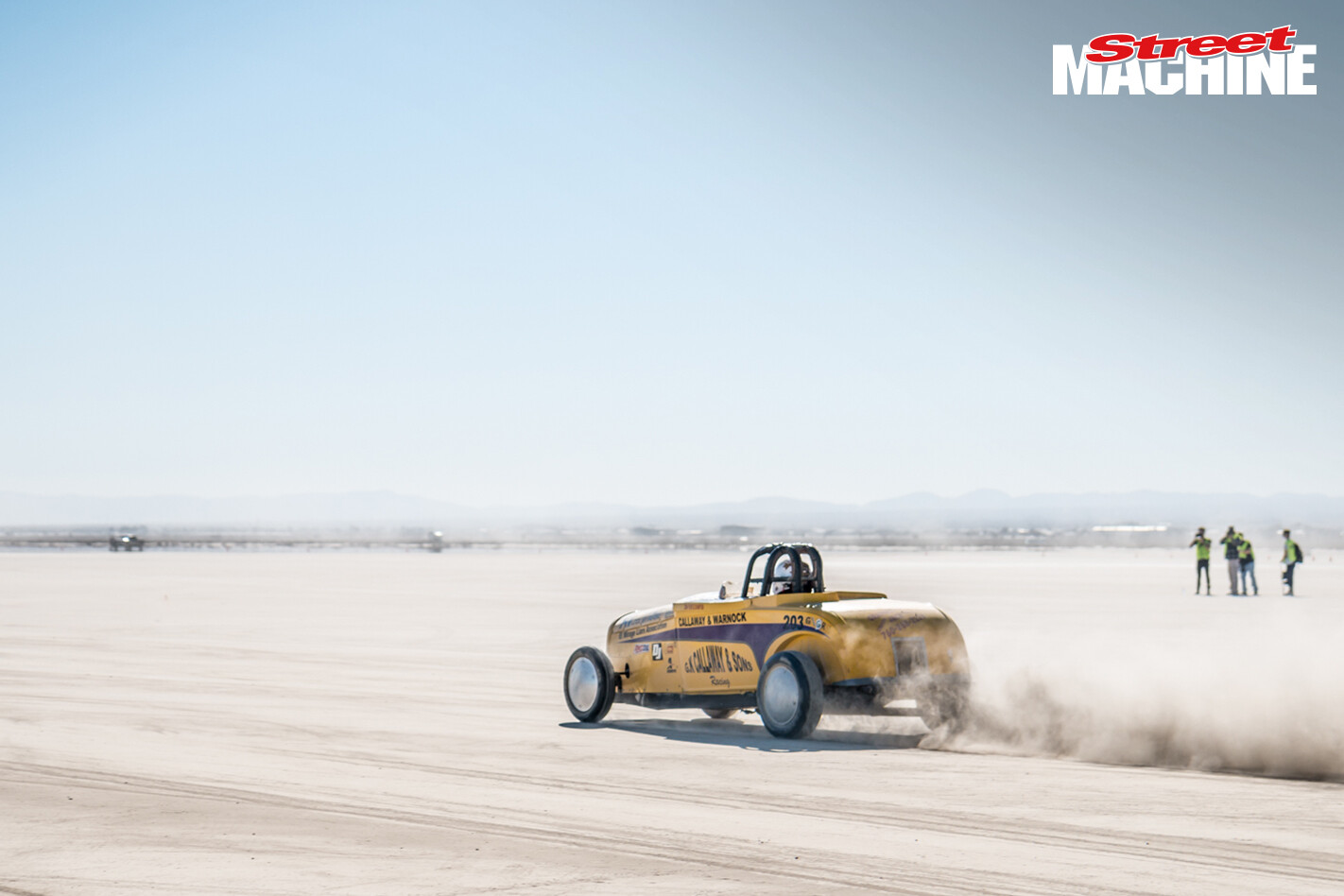 The dry lakebed of El Mirage in the Mojave Desert, about 2.5 hours north-west of Los Angeles, was one of the earliest and most well-known places that lovers of speed would go to test their cars against the clock and speedometer as early as 1938. As the popularity of hot rodding and land speed racing grew after the War, a group of men that had already raced on the dry lakes for several years decided to incorporate in order to promote safety and let proper competition flourish. The Southern California Timing Association (SCTA) celebrates its 61st year of land speed activities at El Mirage this year (discounting WW2 of course) 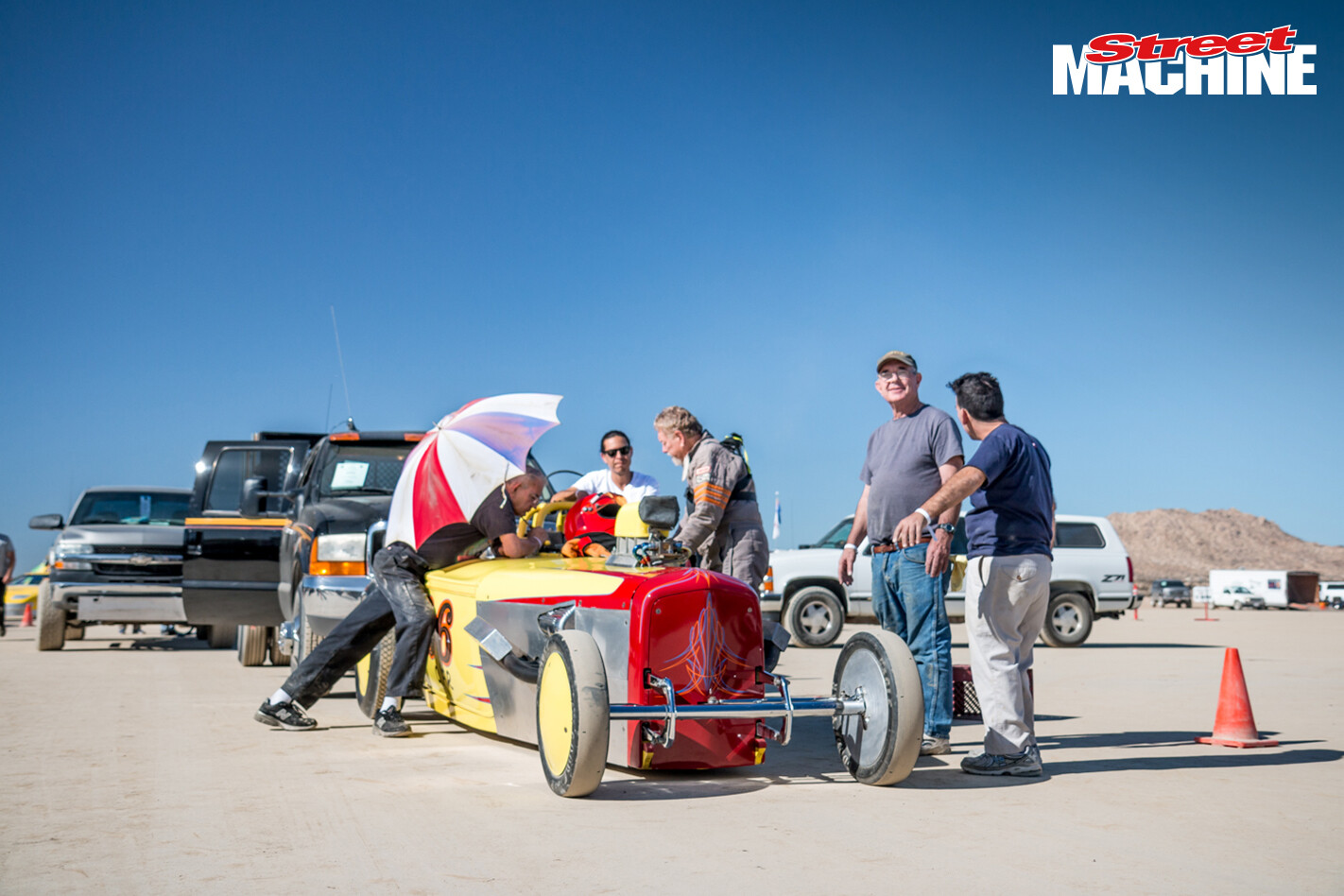 This particular weekend marked the end of the 2015 racing season on the lake, where various racers from clubs within the SCTA would have their final go at setting land speed records and PBs with their machines. There are six racing events held at El Mirage annually between May and November and unfortunately two had been rained out this year, however there were plenty of entries to make this a weekend of great racing. 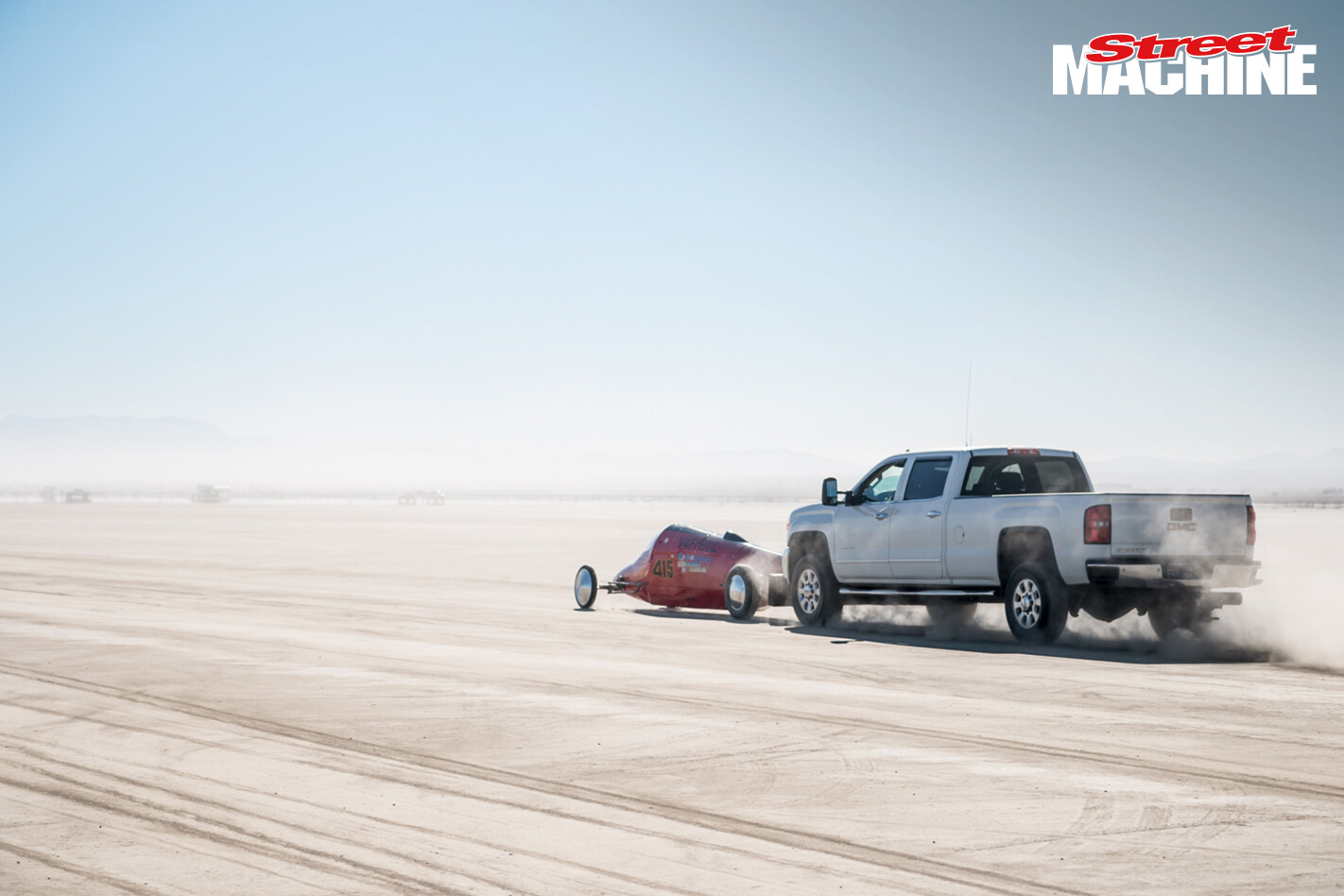 For those uninitiated, land speed racing at El Mirage is slightly different to Bonneville. El Mo's course is 1.3 miles long and has a 132-foot timing trap at the end. Like Bonneville, you start from a stand-still and must accelerate straight along the course, reaching the highest possible speed before the timing trap, however unlike on the salt, records are not set based on backing up your run and averaging the two speeds, but rather just the one run. This makes racing and trading records faster paced and more exciting. The short distance of the course makes for easy spectating, but also means getting traction down early is absolutely critical to netting a quick pass. This is made significantly harder by the lakebed's surface - a hard-ish base of dirt with a deceptive layer of incredibly fine silt that has come to rest as the lake has evaporated over the summer. The dust is so fine that it gets /everywhere/ and SCTA officials actually stress for racers to seal their cars as well as they can against it. Off the starting line, many cars require a friendly push due to their low gear ratios and once the revs come up the highly-tuned engines crackle into life and drivers must wrestle with the initial traction loss before smoothing out the ride and pedalling their way to top speed. 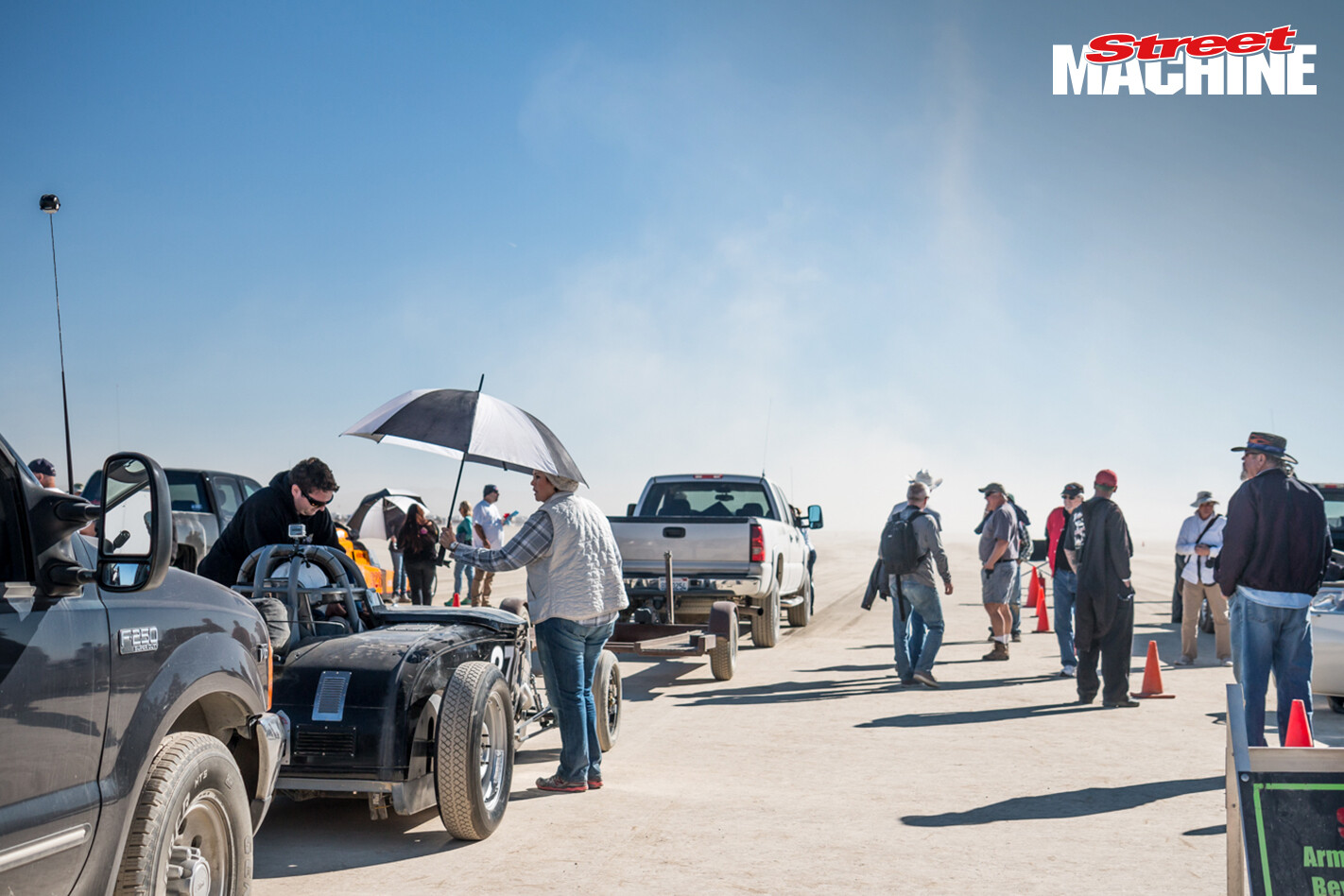 Cars literally disappear into the dust for the spectators milling around the pit lanes, but listening closely and with a keen ear, you can listen to each gear shift and traction slip to discern whether it was a potentially fast run as the drivers hurtle down the lakebed. Sitting on the sidelines, you're treated to the magnificent view of competitors kicking up giant plumes of dust racing flat out and, for those able to go faster than 160mph, the sight of parachutes popping once they're reached the end of the track. The pit areas are always full of commotion too, as many racers and crews try to find that extra ounce of power or aerodynamics where they can. Fighting the dust is a real problem and many go to extra lengths to keep it out of intakes, cabins and their own temporary living arrangements. 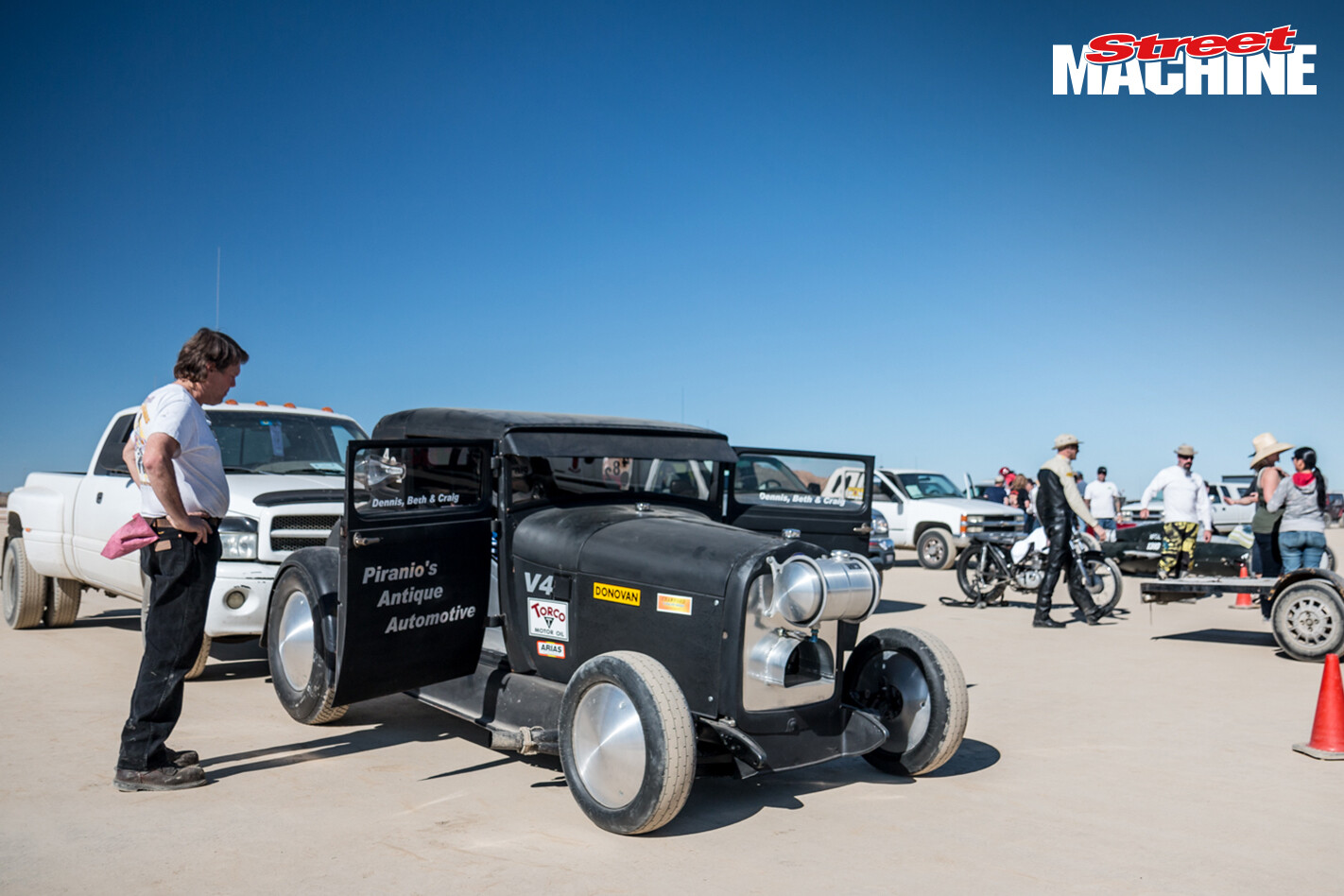 This innocent looking Model A coupe is actually the fastest Model A-powered Model A Coupe to ever run at El Mirage. Earlier, with a different engine, it was the first one in the world to break the 100mph barrier at Bonneville in 2012! It ran a best of 114.64mph and was built by Piranio's Antique Automotive out of Denton, Texas. It features a full Funny Car style roll cage, quick change rear end and one of Henry's finest Ford four-bangers singing to the tune of 262HP @ 4500rpm on pump gas. This is partly thanks to the ultra-rare aluminium Crawford OHV and twin Weber DCOEs. We featured the Vintage Performance Special back in SM:Hot Rod 14. Owned and built by Logan Davis, it was piloted by Tom Evans, though failed to make a single complete pass, turning off the course before reaching the timing trap due to mechanical problems. When the car was featured in SM: Hot Rod, it was running a killer four-port H&H Antique-headed 'banger, but is now rocking an angry blown flathead V8 that has already run over 180mph at Bonneville in a roadster. Hopefully the team finds some luck soon and can really see what this beauty is capable of. Another car that has found page-time in Street Machine is Bob Stahl's insane '65 VW Beetle. 2925ccs of dak-dak terror, its said to be the fastest floorpan car in the world, running over 150mph on the salt at Bonneville in 2013. Here at El Mo it managed a 134.89mph, raced by Mark Olson. 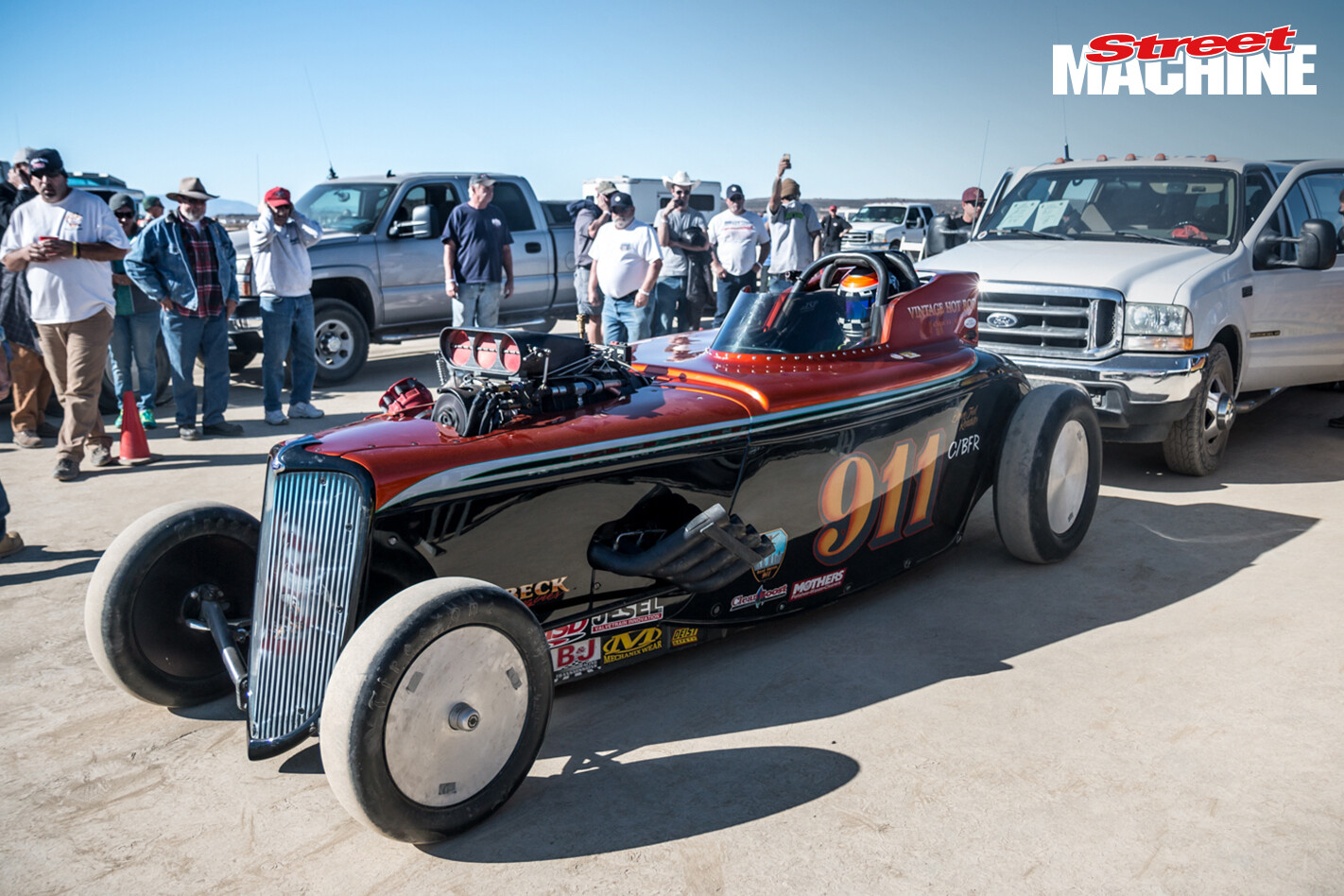 This almighty beast is the Cummins-Beck-Davidson-Thornsberry '34 roadster, running in the C/BFR class. It's the first and only roadster in the world to go over 300mph and still holds the record at 301.15mph for the A/BFR class. The C engine class is slightly less powerful, but Dave Davidson still managed to drive the beast to 277.66mph, obliterating the previous record by over 36mph, and officially recording the fastest El Mirage speed of the year! Saturday saw perfect weather but by Sunday afternoon the wind had picked up and the course was literally 'dusted out', making racing unsafe with such limited visibility. At the end of the weekend, 27 class records had been officially broken, and the fastest speed of the year had been set, so all in all quite a successful weekend of land speed racing! 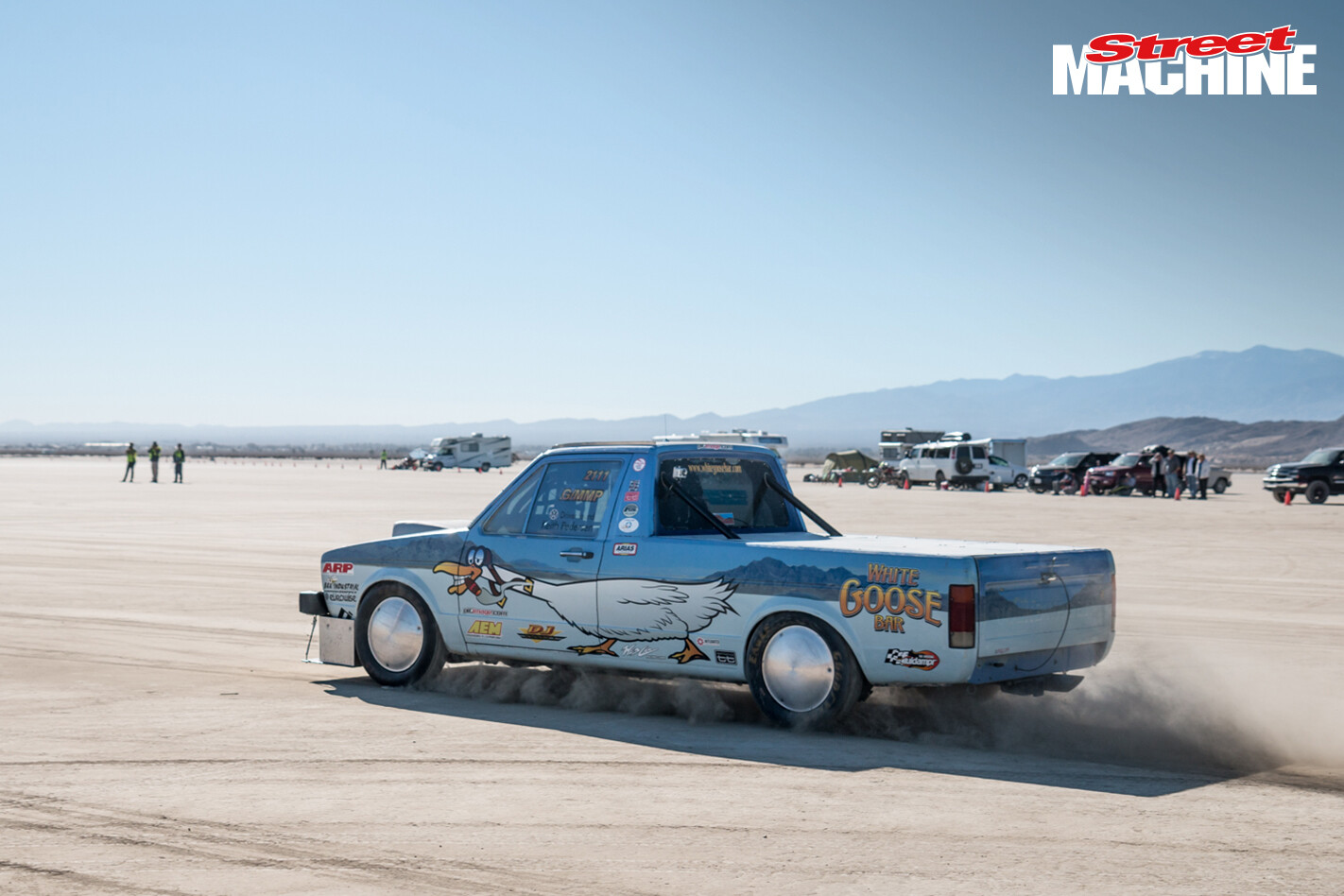 This Mk1 VW Caddy was something a little bit different. Front wheel drive, and running in Modified Mid/Mini Pick Up, the little Veedub four-banger mustered a best of 73.78mph. 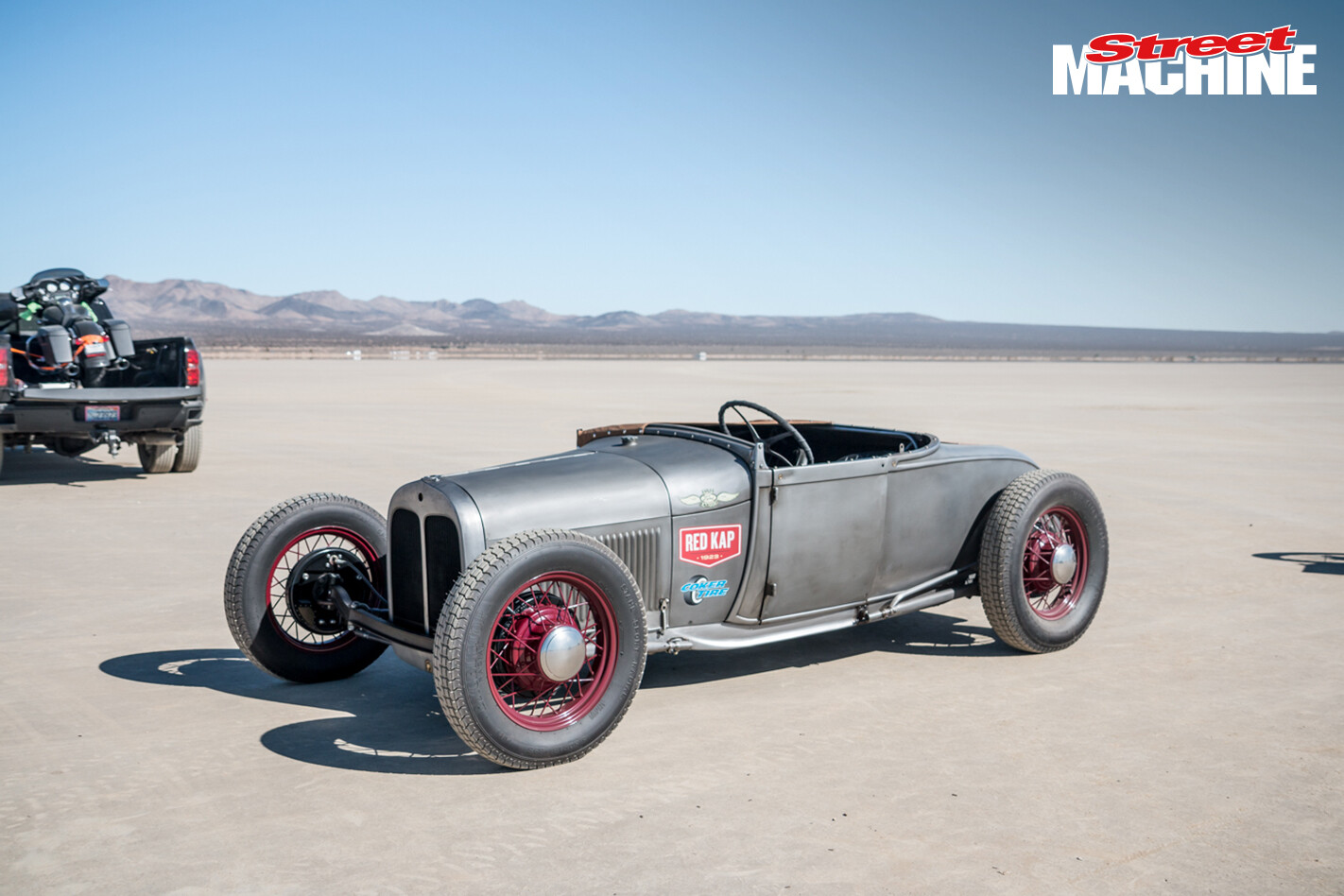 It seemed there was no rest for Heath Pinter, who after driving across country for three weeks to race at TROG then heading home, was back at it again hanging out with the H&H Flatheads crew. Bobby Green of the Old Crow Speedshop brought down the Craftsman Twin T after its debut at TROG this year. He was racing a different car, but brought the radical twin-engined vintage speedster down to wow the crowds. Tim McMaster, otherwise known as the Y-block Guy, brought out his 292-powered F-truck. He only managed 134.36mph on the weekend, but said he'd been able to get her to 142.2mph previously. 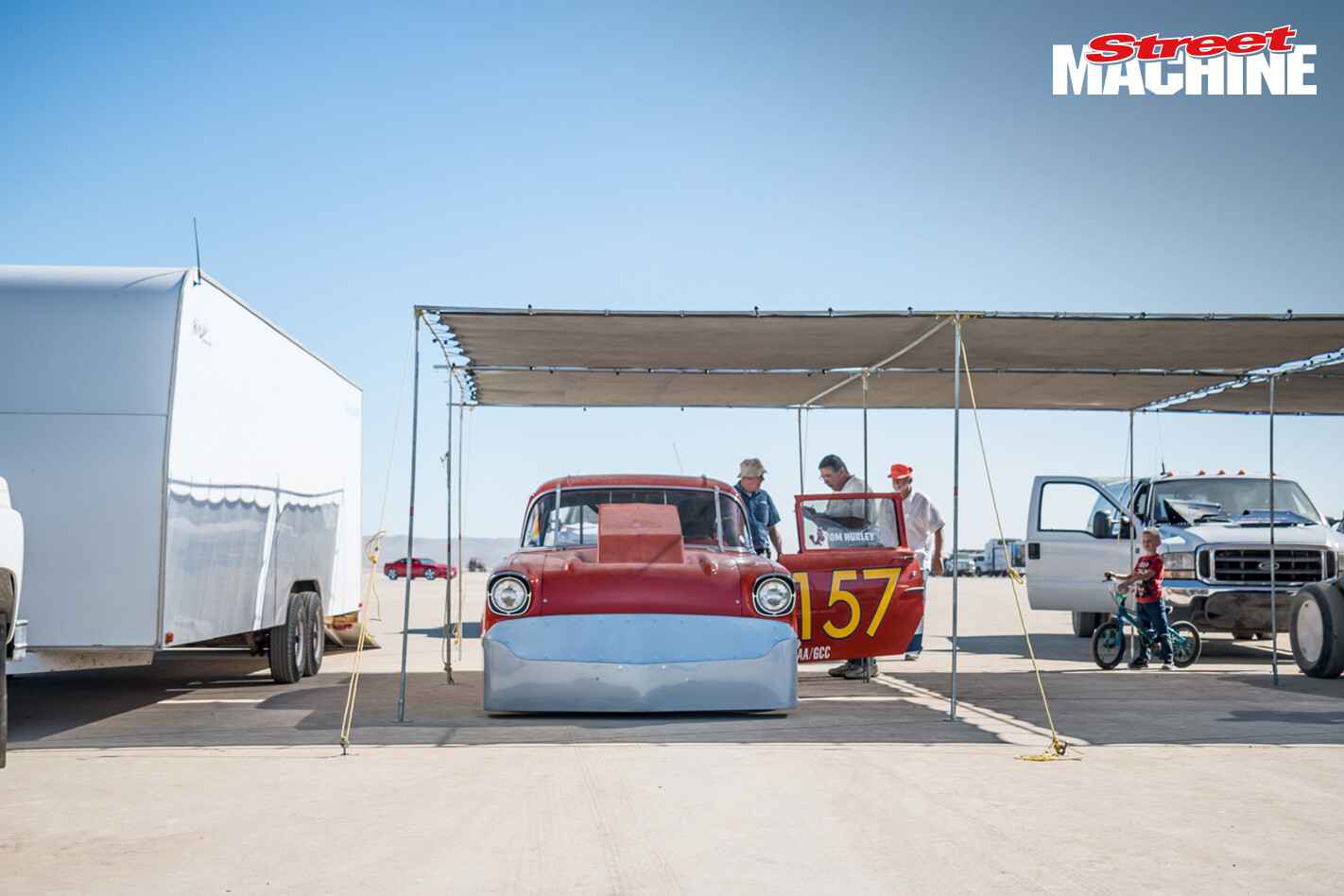 Tom Hurley has his '57 Chev 'Old Stewball' tech inspected before racing. It's been a race car since the '60s, having been converted from drag car to land speed racer over the last decade or so. He came all the way from Dallas, Texas and was working through some problems, managing a 170.98mph.

Visit www.scta-bni.org for dates of 2016 land speed racing events at El Mirage and Bonneville, as well as an incredible amount of resources, history and results.