I had never heard of Gary Kollofski before, the owner of this ’55 Chevy that he’s dubbed the ‘Ultimate Sleeper’. As it turns out, Gary is considered one of the Godfathers of the Pro Street movement, running a mini-tubbed ’55 Chev with 15x10 and 15x3.5 wheels and a blown big-block as early as 1976. It was featured in Hot Rod magazine back in Dec ’77 and featured a lift-off front-end held with Dzus fasteners, something you’d only see on race cars back then. He quickly followed that up with a ’36 Willys coupe fitted with a twin-turbo SBC, in 1979! This guy was always ahead of the curve. Gary’s obviously still got a bit of a thing for ’55 Chevs and his latest one hides a lot of clever tricks under its outwardly stock appearing skin. Based out of Minneapolis, Minnesota, Gary and Dale Pelvit—the man responsible for all of the fabrication—must have spent a lot of time during those long, harsh winters figuring out how they were going to stuff a BPM Marine V12 engine between the chassis rails, and still shut the hood!

“The engine is an all-aluminum, 730ci Hemi-headed V12, which was originally a marine motor with six Weber carburettors on it, but we couldn’t get it to run really well with that, so Dale hand-built the intake manifold. It has three 600cfm Holleys on it now. The hood articulates forward to clear the grille. The front-end will tilt 90 degrees, the doors are suicide doors with all the stock components, it’s got air conditioning underneath the back seat and electric power brakes.”

The whole lot rides on a slightly modified Roadster Shop chassis with a Heidt’s IFS that’s been beefed up to handle the extra weight of the big V12. There was a fair bit of work getting the cooling system to work as they don’t run a conventional water pump, so the radiator has a built-in Meziere electric pump in the bottom tank. The trans is a 4L80E and it goes back to a 9-inch on a triangulated 4-bar. It’s been mini-tubbed four inches and the rear wheel openings were enlarged to accommodate the 18x9.5in billet Rallye wheels, while up front it runs 18x8—more of a Pro Touring combination than Pro Street.

Gary and Dale have done an amazing job hiding all of this work, because it looks like a neat and tidy ’55 Chev all closed up and not much more: “It’s basically made to look stock. You button it up, shut the doors, shut the front-end and people will just walk by and say: ‘Oh, that’s a nice looking ’55 Chev.’ Then you open the door and people say: ‘That’s different.’ Then you pop the hood, and it flips forward and they go: ‘That’s interesting, that’s new.’ Then they peer into the engine compartment and see it’s got a Hemi in it, but they haven’t counted the cylinders. Then they count and they get up 10 and think it’s a Viper, and I say: ‘No, you haven’t counted far enough.’”

It seems like this year is the year of the V12. Will a V16 be the next thing we see in a street machine? It took a fair bit of work to get everything to fit under the hood, including a custom intake manifold that runs triple 600cfm Holleys. Dale also fabricated the snaking headers and designed the flip-front system 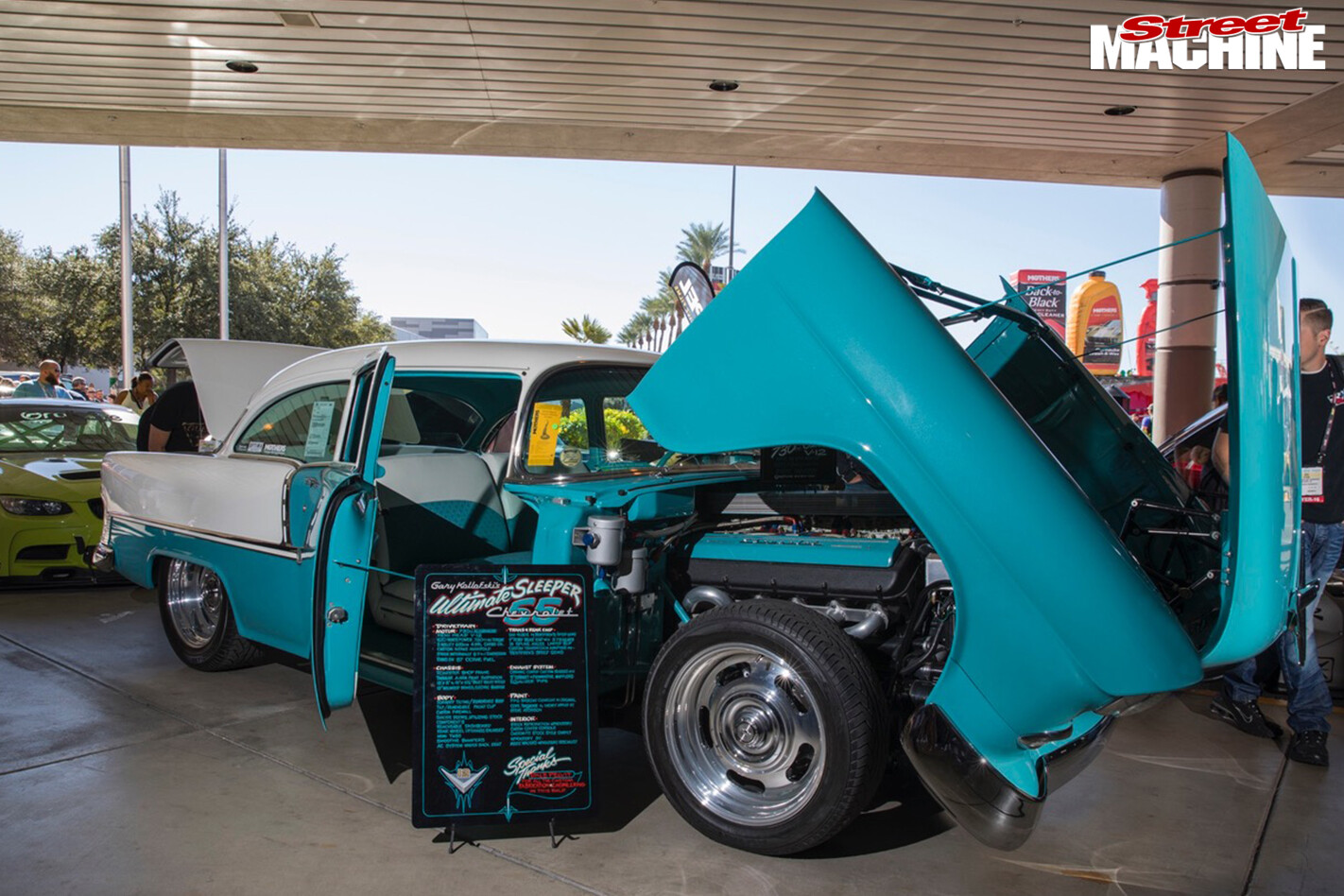 The suicide doors open via the stock door handles and even use all of the stock latches and strikers and the flip-front bonnet also opens from the stock location. As well as looking cool, it probably makes it a lot easier to change spark plugs 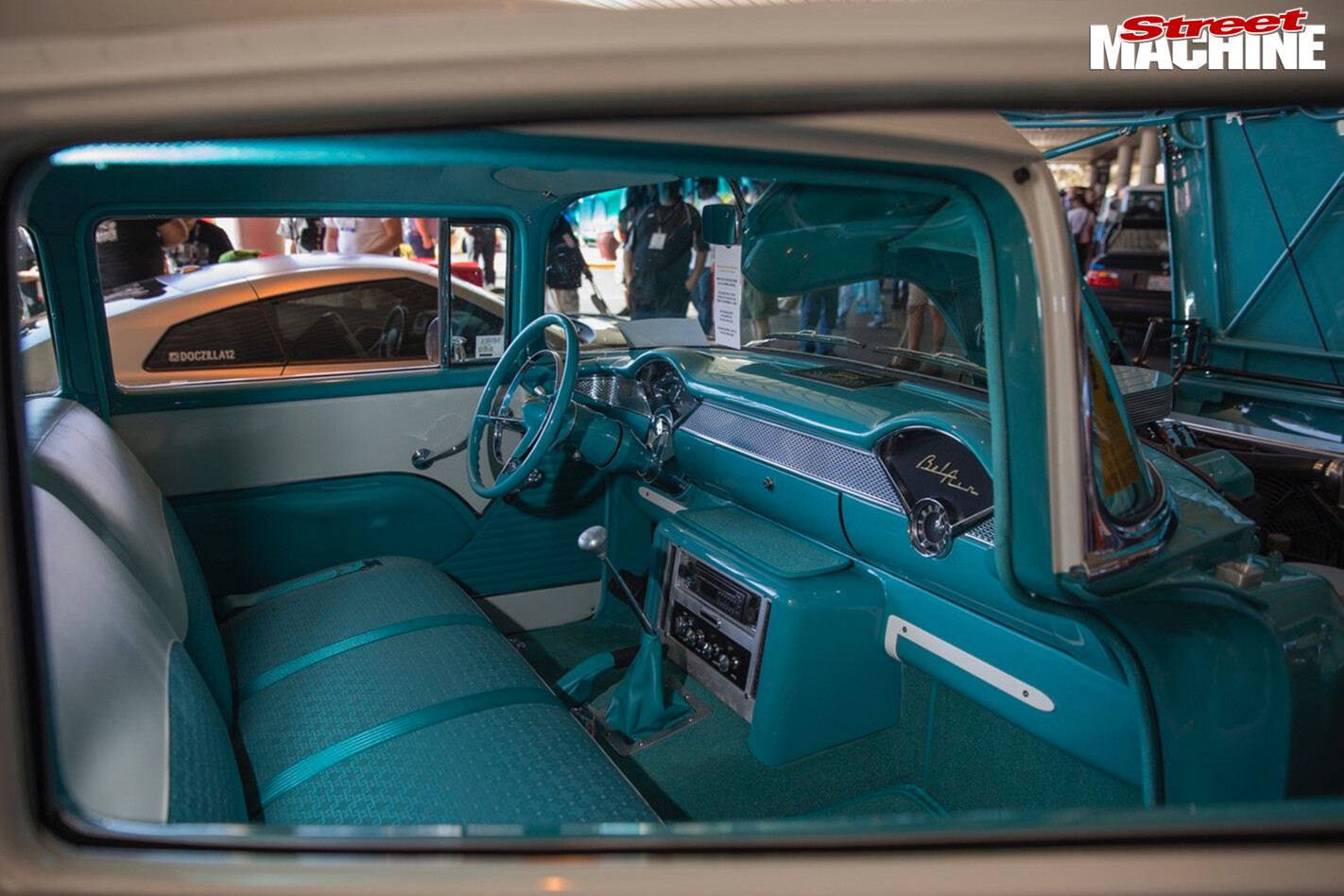 The interior is just as it would have left the factory, including the bench front seat. The console allows cool air from the rear-mounted a/c unit to reach the front seat and the dashboard has been shaved of all switches and knobs, which have been relocated to the console.