THE fifth and final day of Street Machine Drag Challenge 2015 was all about two guys: Terry Seng and Quentin Feast. They were less than three-tenths of a second apart going into the final round of racing at Calder Park. In the end, Terry’s best 8.0sec pass wasn’t enough to reel in Quentin, whose 8.23sec run was sufficient to seal the deal. All that separated the two after five days, five tracks and around 1500km on the road was 0.03 seconds. Talk about a nail-biter! There were other great stories from day five too, with a heap of cars recording their quickest passes ever. Adam Rogash was ecstatic to run the NOSHOW HSV Clubsport into the seven-second zone for the first time, even though it was on the limiter from three-quarter-track. There’s plenty more to come from that car so watch this space for more updates after the boys have recovered from Drag Challenge. 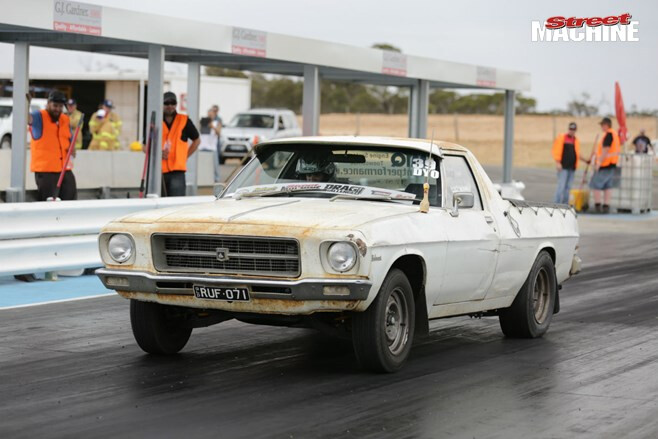 John Di Mauro’s turbo LS-powered HQ farm ute also ran into the nines for the first time. The boys had zero mechanical dramas all weekend and had an absolute ball, but the lack of a rollcage and ANDRA tech inspection on their car meant they were backing off before the line at most tracks. With nothing to lose they were keen to break into the nine-second zone for the first time on the final day, and ended up with a 9.91@137mph. Despite even more mechanical dramas, Louis Younis was at Calder to race on the final day of Drag Challenge. Those Torana boys were absolute troupers. They smashed a piston and cracked their block on day two, found another small-block Chev that day on Gumtree, got it in the car and drove to Mildura. Then on day three they lost first gear in their Powerglide transmission, and finally on the last day they wrecked two pushrods in the ‘Gumtree Special’ motor. No one at Street Machine can believe they managed to make a pass at every track and finish the event. Hats off, fellas!