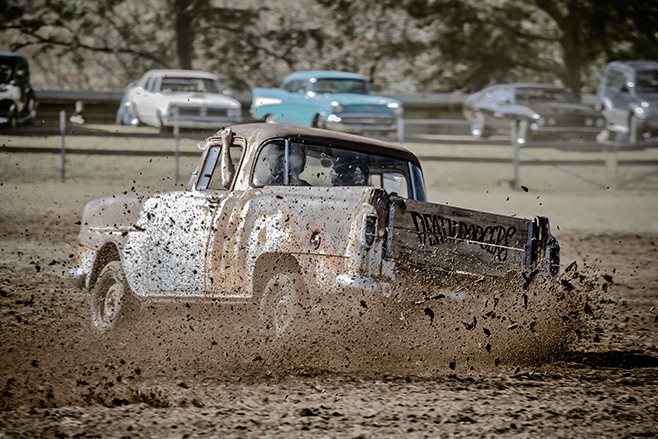 The Mud Run is strictly invite-only. But don't go thinking it's a black tie event

“You’re not a guest this time — you’re workin’,” Tony ‘Webby’ Webster boomed down the phone.

So I was on lunchtime barbecue duty at Webby’s Mud Run. I already had a job to do, covering the day for Street Machine, but when an Aussie bloke asks you to man the barbie you’d be a bloody fool to turn down the honour.

Despite the call, an invite found its way to me and a month later I was back at Gresford Showground in the Hunter Valley.

As I walked up the hill, away from the dirt oval that’d just been attacked by a swarm of postie bikes, I spotted Webby looking worried.

“It’s out of control,” he says, not really looking at me. This isn’t the Webby I know. I follow his gaze out across the crowd. There must be 400 people here, maybe 200 cars. Then there’re the caravans and tents fighting for every inch of space. Last year wasn’t half as busy.

I ask him if he feels like a proud father, watching his Mud Run grow up. 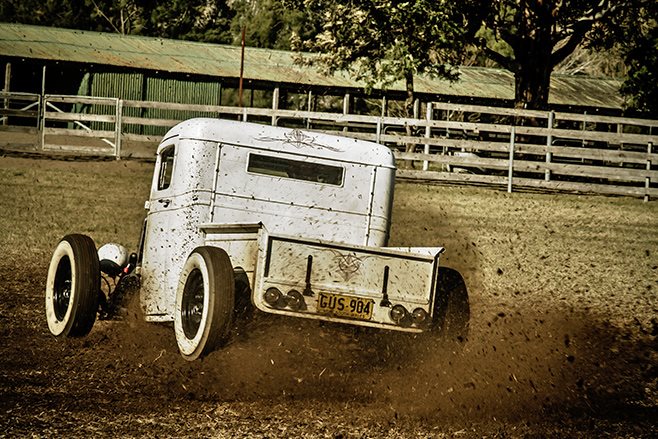 “Oh it’s good. It’s only if something goes wrong that I’ll disown all of youse.” That’s the man I know.

A rusty FB ute screams onto the track sounding like a pissed-off NASCAR.

I don’t know if that’s a description or a club name but I want to find out. The FB is the fastest thing I’ve seen here and I weave around families on picnic blankets and camping chairs down to the fence.

Another Mud Run boss, Joal Butcher, is manning the gate with fellow Devil Chad Presbury. As they open the gate to let the FB out of the ring, 20-odd rods, rats and customs are queuing to get onto the track and by the time I walk past them all, I find the FB with a group blokes around it. 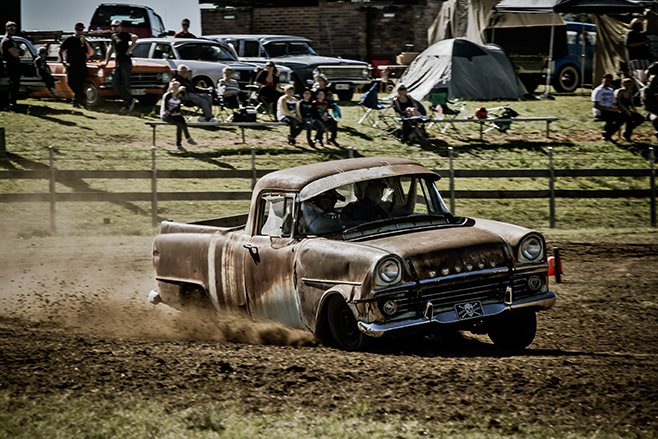 “It was a garden ornament up until about eight weeks ago,” a man who introduces himself as Sporty says. “The guy who owns it used to race AMCA National Speedway — he had this in his front yard and a 253 V8 in the shed. We thought: ‘Let’s put the FB and the race motor together,’ and after eight weeks we had it ready.”

Then he introduces owner and fabricator Dale Woolaston.

Dale smiles. “We all sort of own it now,” he says. “I gave racing away in 2009. This was one of my first engines — it’s been sitting in my shed for 10 years. The FB was in my backyard rusting away. We had to weld in new chassis rails and bits underneath it, but yeah, everyone lent a hand and it is what it is today.”

“I think we spent less than $300 in parts,” Sporty chips in. “The rest of it was either lying around on the floor, stuff we scabbed or what friends donated.”

He gives me the guided tour. 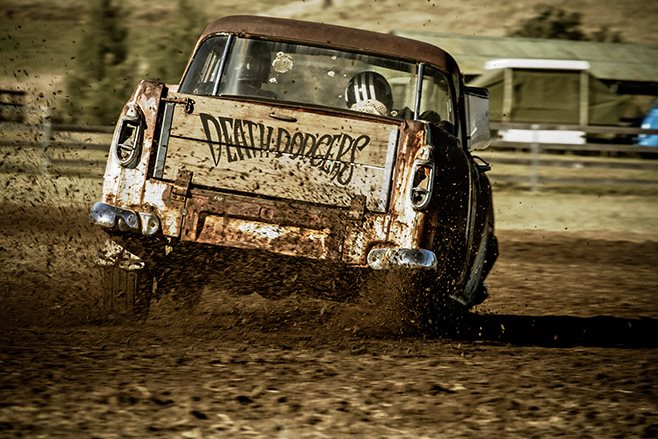 “These are old speedway tyres, those are double-plugger mud flaps,” he says, pointing at the thongs hanging under the tray. “It’s running off-road double shocks on the rear. We were too lazy to take the old ones off so we left them on and put an extra couple on. There are no engine mounts — we’ve welded the engine in. And the brakes were totally rooted on the back but at least the front ones work.”

The Death Dodgers formed a year ago. They came to the previous Mud Run as spectators and decided then that they’d have to return with a car.

“It’s getting out of control, “ he echoes Webby. “Nearly too big to handle. I’ve done about 70 licences today.”

He tells me a group of guys approached the Devils a year back and asked to join the club. They were told they couldn’t because the Devils wasn’t a club, just a bunch of mates. So those guys started their own club — the Death Dodgers. So that’s that. 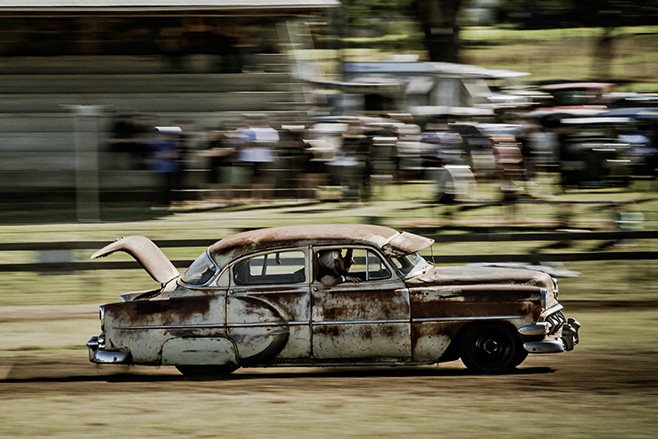 “Her name’s Delilah and she’s only been going three months,” owner Jessica McKenna explains. Her husband, Eric, put a Commodore V6 under the bonnet, with matching running gear including the diff.

As night arrives, the day’s winners are announced: the Death Dodgers take Best Car, Andrew Smith wins Best Bike for blokes and Zena Wilson takes out the matching trophy for the ladies.

As the Flattrakkers begin to play, I go in search of Joal. I’d seen him on the track in the ’28 Ford Tudor he built for the Mud Run in eight weeks after he heard the Death Dodgers were bringing a car. Now he’s by one of the fires, looking tired but satisfied.

I ask him if there’s any chance the Mud Run will go public.

“Nah, we’re stoked with what we had this year. The other thing is, we want to keep it free. It’s nothing to camp, nothing to watch. You can bring a devon and tomato sauce sandwich and a bottle of water, and have the time of your life. It’s the coolest barbie in the world.”

That was when I finally remembered my barbecue duties! There was nothing to do but get out of Gresford. 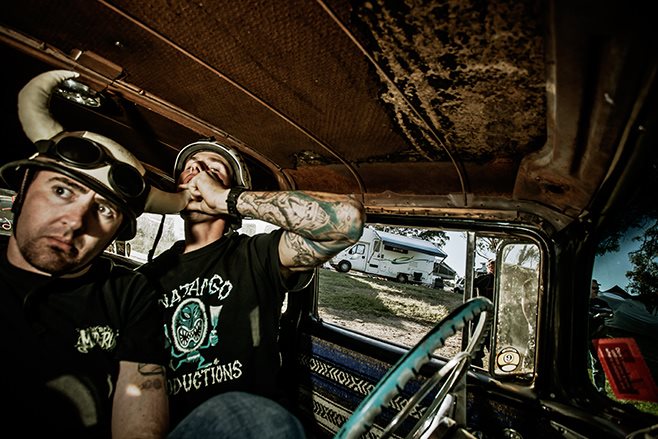 1. Street Machine scribe Richard Berry ain’t one to blow his own horn but last year’s Mud Run winner Greg Fuller was happy to give it a go before bolting out onto the track in his ’57 Chevy wagon 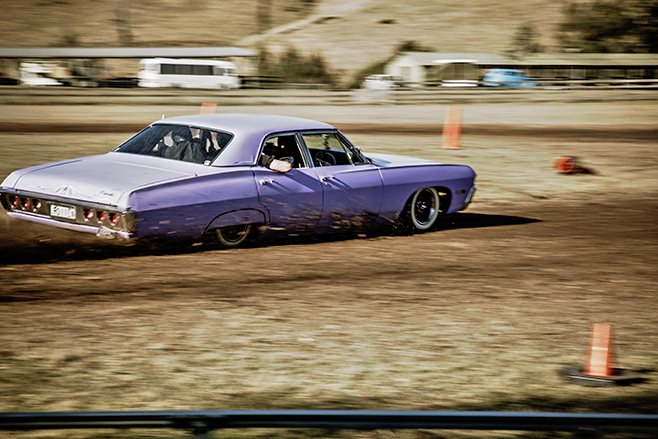 2. Given how he much he was throwing it around out there, it’s amazing Kane Welch’s purple people-eating 1968 Chevy Impala only sustained a puncture. Easy fixed 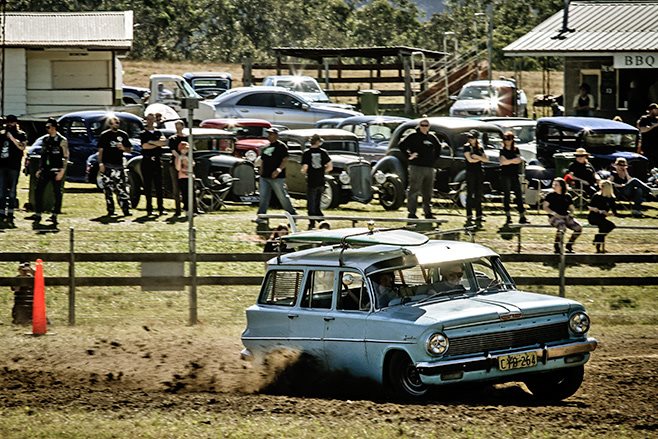 3. Mud’s up, dude! Gordon Hill’s awesome Holden EJ wagon — complete with surfboard on the roof racks — carves up the track in the Gresford early morning sun 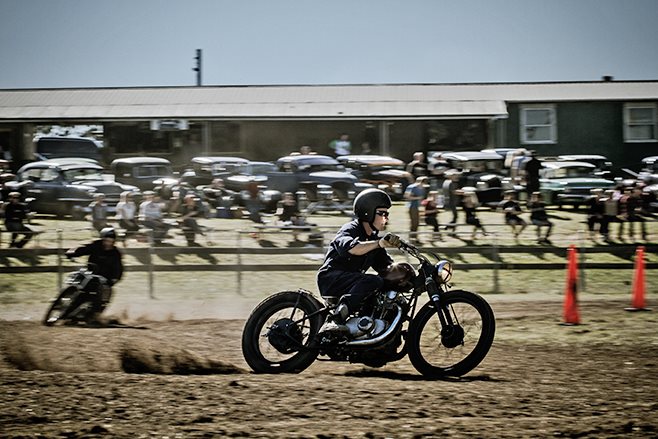 4. Andrew Smith spent last year’s show pinstriping. This year he returned with a Suzuki GS400 hardtail he built himself. Putting on his overalls, gardening gloves and race face, Smith won the bike category 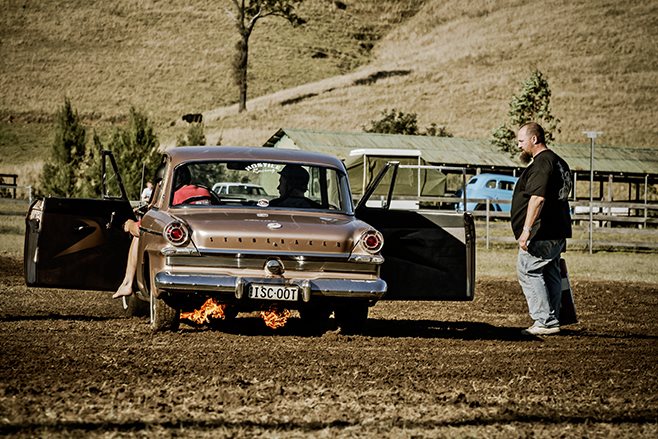 5. Nathan Kramer’s Studebaker looked far too nice to be playing out in the mud but he took it out again and again. Despite the car doing its best to set fire to itself, he got through unscathed 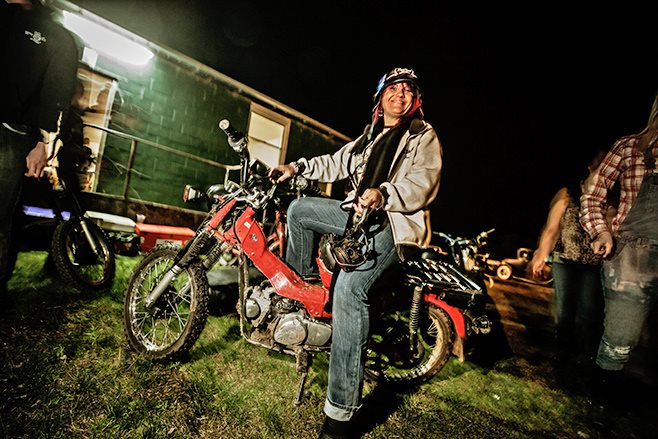 6. Zena Wilson flew down from FNQ, borrowed a postie bike and won the women’s Best Bike category. Her advice to aspiring racers? “Keep it in second!” 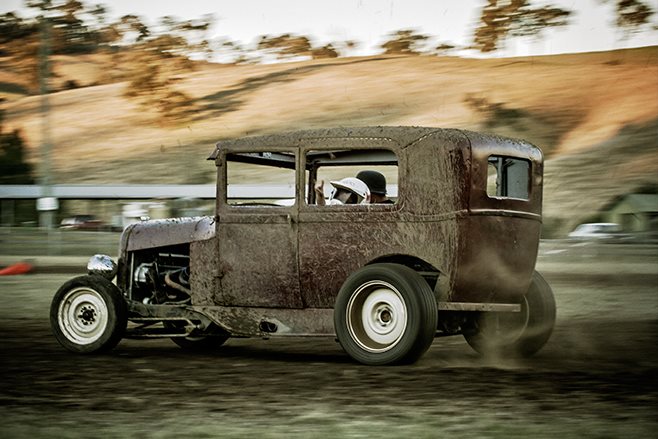 7. Joal Butcher’s 1928 Ford Tudor was a box of bits eight weeks before the Mud Run. With help from Webby, he had it together and on airbags in time, packing a five-litre V8 from a VS Commodore 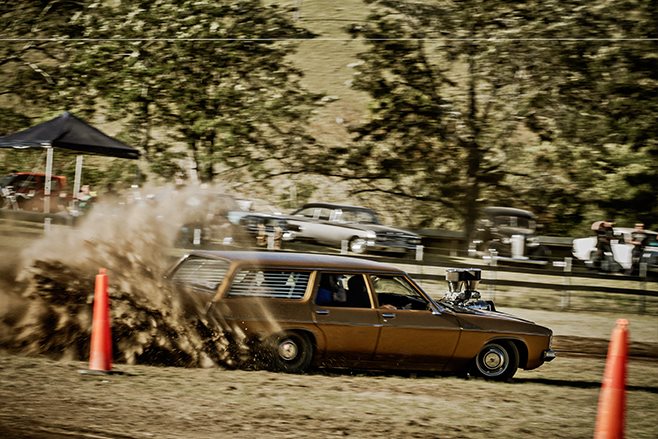 8. Kevin Pryce from Pryce Engines was a major sponsor of the Mud Run this year, which is why — despite the rules excluding modern cars — he was allowed to get out there in his monster Kingswood wagon 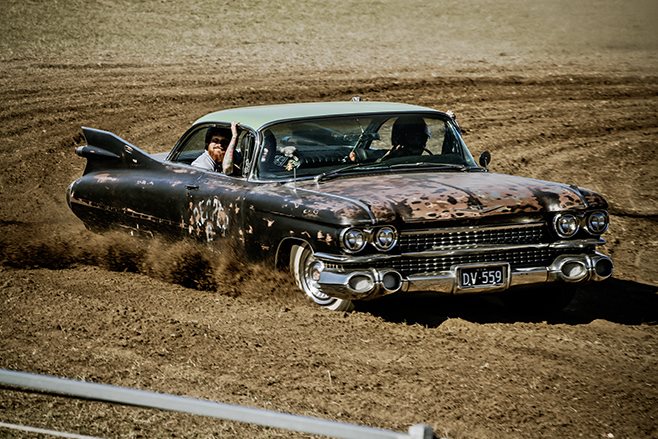 9. Dan Morris’s 1959 Cadillac looked like an ocean liner as it threw its weight around out on the track, rear end swinging out and spraying the Gresford mud 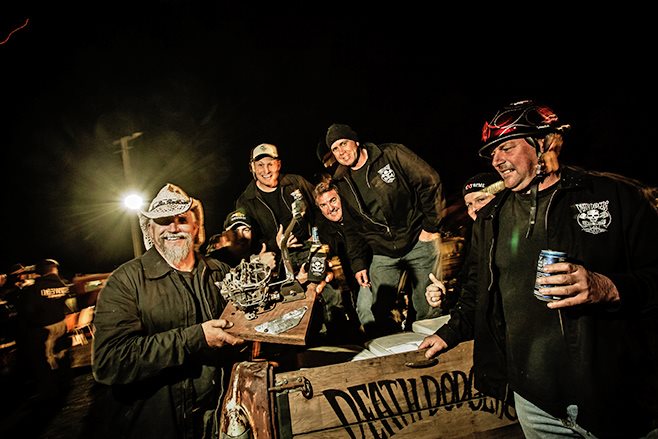 10. The Death Dodgers came to the Mud Run armed with their FB ute and won the Best Car category. Only a couple of months ago it was rusting away in Dale Woolaston’s (on right) garden. He plonked a 253 V8 in it from his speedway racer 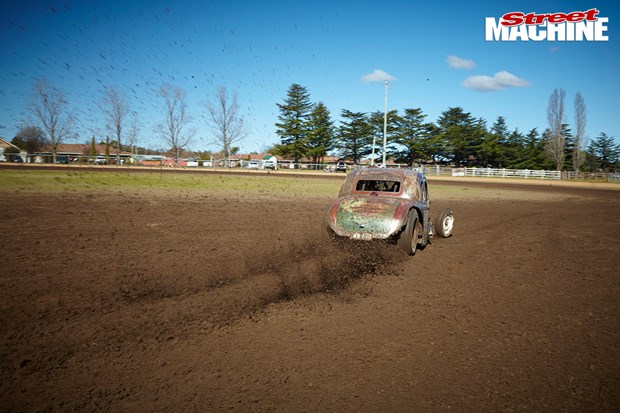 Mud, mayhem and marvellous machinery at the third annual Uralla Dust Up 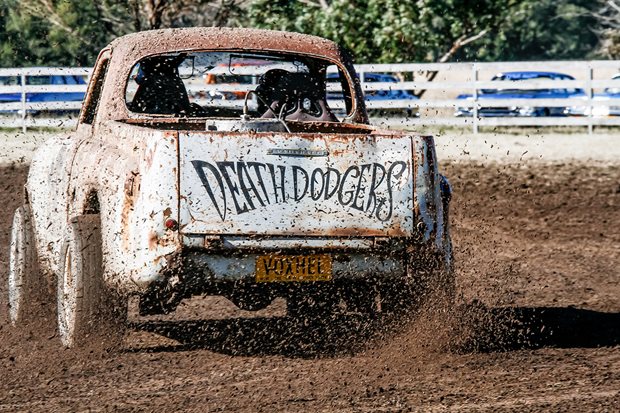 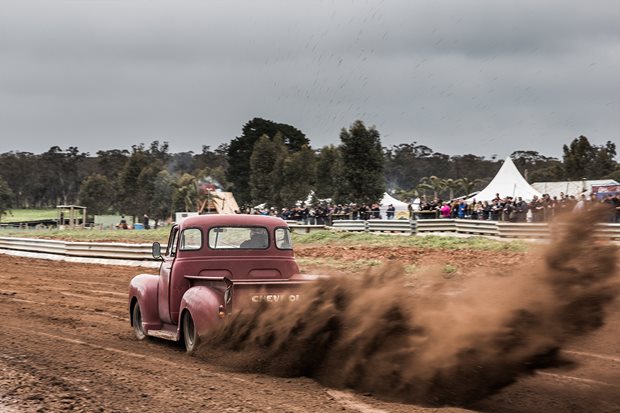 Chopped 2016 was a muddy affair, but the faithful didn’t mind one bit