CONJURE an image in your mind of a hard-working outback station hand and chances are Jess Edwards, known to her 52,000-plus Facebook followers as Jillaroo Jess, would be as far from that image as your mind could get.

Spend a few minutes with this highly energetic 27-year-old, and you realise the international spotlight has shone on Jess due to her strength of character, hard-working attitude, and passion for the lifestyle. It is this life – and her passion for it – that Jess shares with her global audience, which has led to her becoming a social media icon.

Jess Edwards wasn’t always a country girl. Indeed, until age 16, when she and her family moved to Gympie, Jess called Brisbane home. A daunting prospect for a ‘city kid’ you would think, but Jess’s inherent passion for country life and her go-to attitude soon saw her find a way to fit right in – and one that hinted at future pursuits. “It wasn’t difficult to adjust to the country life, as I’d always had a love of the country,” Jess said. “It was definitely weird moving from a 2000-kid school to one of only 200, though.

“Making new friends would’ve been the hardest part at that age,” she affirmed. “It became a lot easier when I got a horse, though, and could relate to some of the other kids.”

Working with her newly acquired equine companion soon led to other associated activities, including things like volunteering with the Riding for the Disabled charity, plus garnering early mustering skills and experience.

“I owned a massive two head of cattle,” she laughed. “And I was mustering on a few smaller properties. I ended up [later] doing a few small contract musters on cattle stations while I was also working full-time in town.” 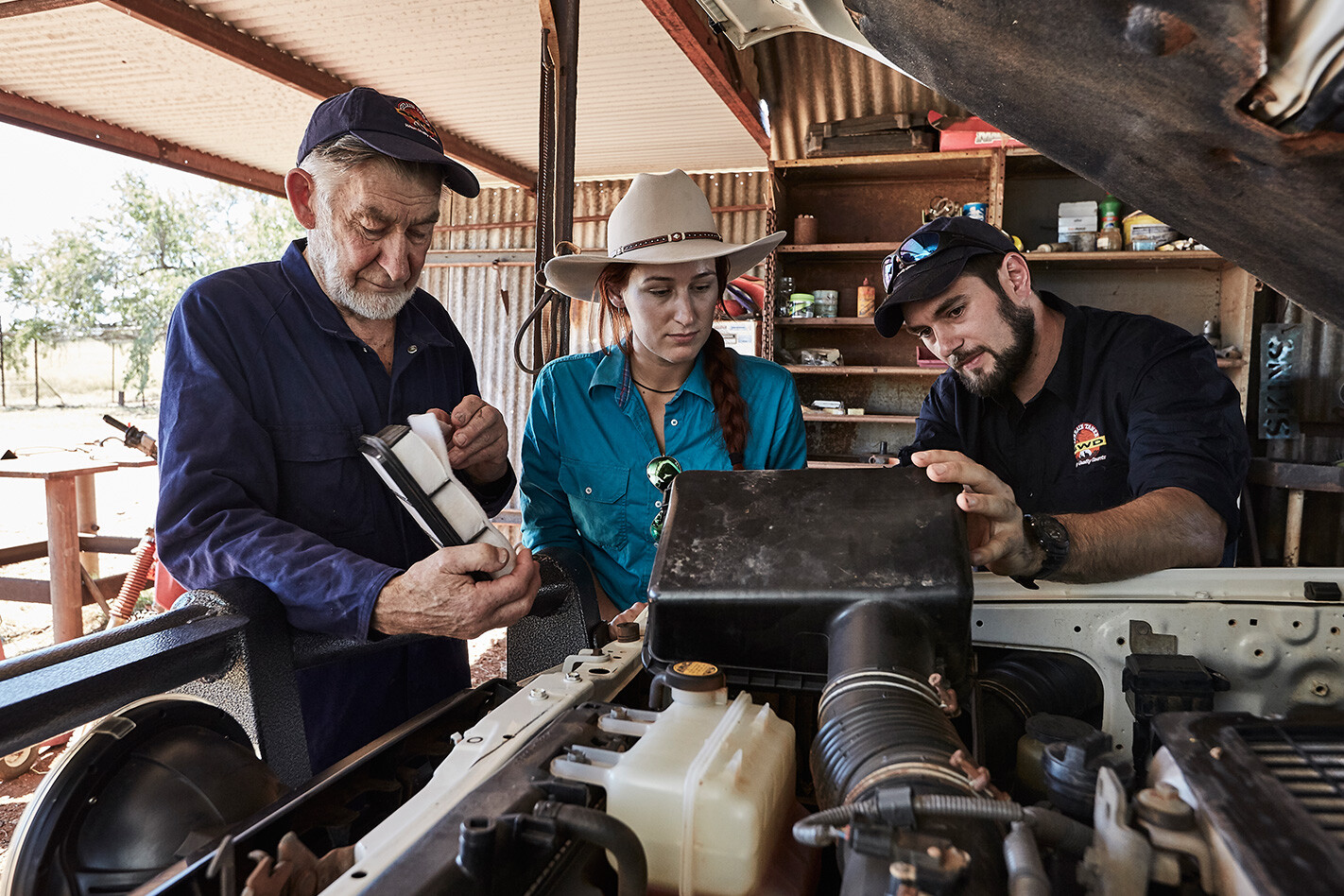 Jess stayed in Gympie for a few years, gradually spending more and more time on the land with, initially, most weekends taken up working on stations and working full-time with jobs at places as varied as radio stations, a law firm and local government. It was also during this period, in 2012, when Jess started her first foray into the world of social media with a blog.

The blog was a hit and led to loads of interest from family, friends and strangers from Australia and the rest of the world, who followed her updates on country life religiously.

In 2014, Jess decided to chase a slightly different dream – she’d always wanted to drive mining trucks – and left Gympie to move to Karratha in WA’s Pilbara region. Unsurprisingly, it only took her a few days to gain her Heavy Rigid licence and Multi Combination permit, thanks to some super supportive instructors and her own go-for-it attitude. 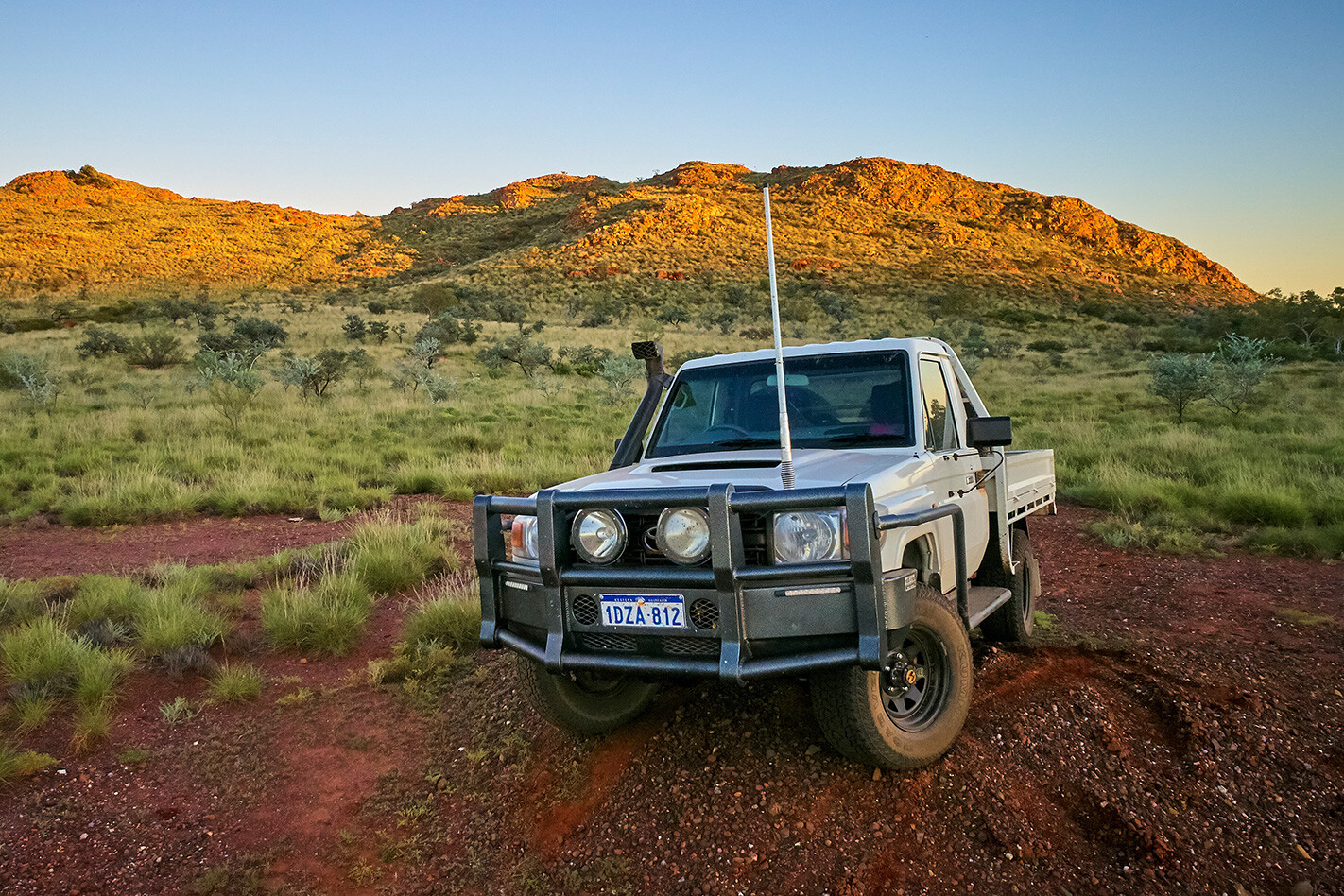 She soon moved into (supervised) road train driving, but this was only on occasion; the lack of confidence on the part of employers to take ‘a chance’ on a young, relatively inexperienced female driver saw her mostly working an office job on-site. Not content to sit and wait for a rare opportunity, Jess headed south to Hopetoun for a harvesting job driving chaser bins.

During this busy period, Jess realised she didn’t have enough time to keep her blog ticking along, so she took the plunge into social media and created a Jillaroo Jess Facebook page and Instagram account.

This timed with her returning to the Pilbara and she soon found herself living her dream job behind the wheel of a mining truck. And of course, she loved it (and so did her always-growing social media audience). However, after a year, the often confined working environment of the mines outweighed its attractive monetary incentives and Jess returned once more to her beloved station life. 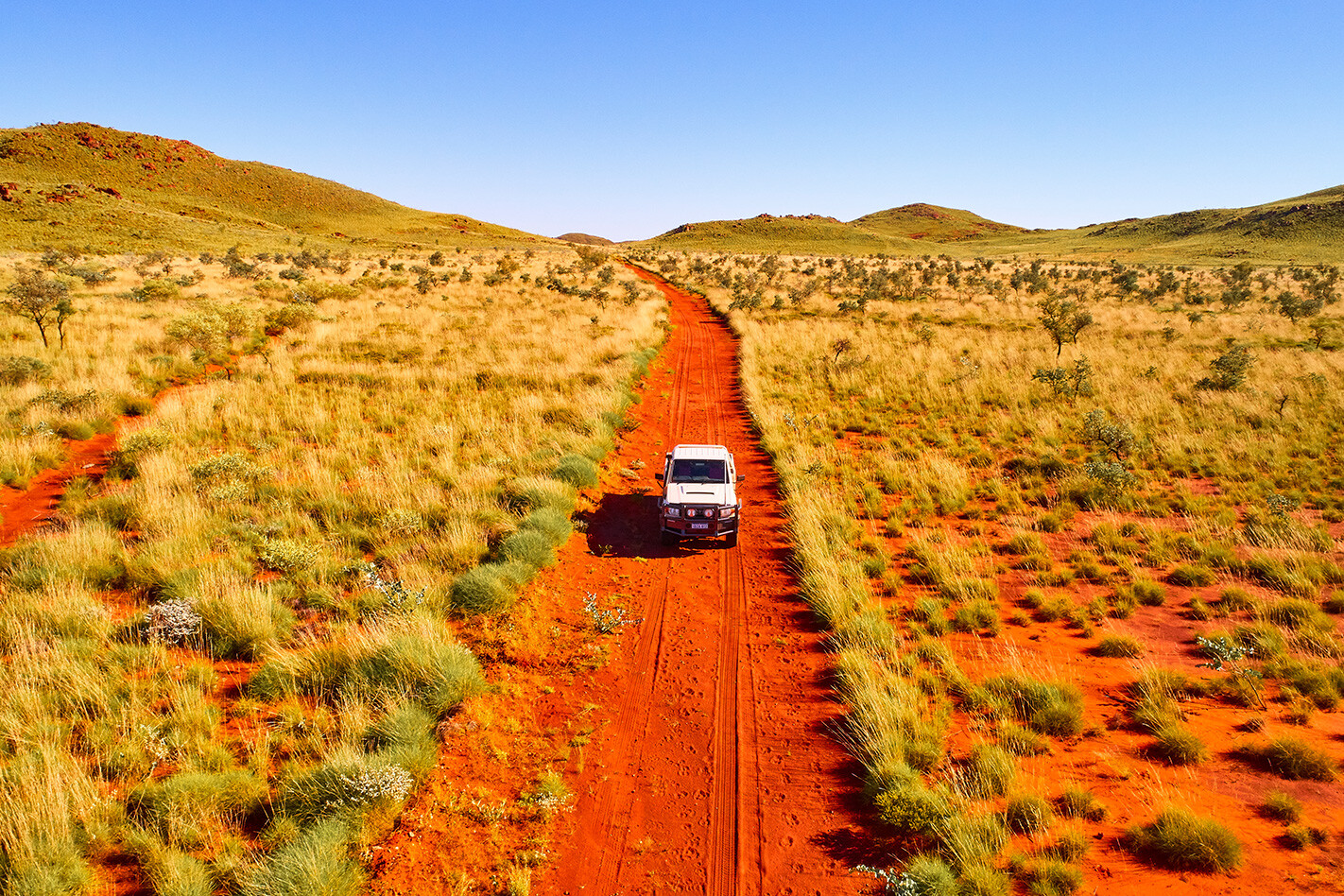 “From the outside looking in it is [mining work] a cushy job, but there’s a reason why the money is so good. With all the rules and regulations it’s not the easiest environment to be working in. Whilst I always ensure I’m working safely, it wasn’t for me.”

Of course, Jess kept all of her social media followers up to date, and her dedicated audience (at that stage, mostly female) continued to follow her. Jess’s audience was significantly boosted following the posting of her now-famous truck safety video on September 2016, which went viral. Jess was stoked.

“I think it [the audience] was mostly female until my truck video went viral. I believe it’s about 60/40 men-to-women now. There’s a lot of truckies following my adventures now,” she laughed. The video’s popularity showed how people love a genuine character; although, Jess’s burgeoning media profile wasn’t an easy task to maintain. Balancing a tough working day with trying to progress her digital ‘brand’ was difficult, and there are always (thankfully rarely) people who aren’t afraid to spruik negative comments through the anonymity of the online world.

“Most of my feedback is positive,” Jess said. “I honestly haven’t had anything from anyone thinking a girl shouldn’t be out here. Unfortunately, social media has really fed ‘Tall Poppy Syndrome’, which has been difficult to handle at times. It’s all a learning curve, though.”

Part of that learning curve has been dealing with everything from marriage proposals, “I’m not sure how many, but I suspect most are after citizenship,” Jess said, to Hollywood visits. It’s a world as far away from outback station life as you can get, but one that with Jess’ artistic bent, she has found fascinating. “I was in Hollywood with Kader Boot Co, which is also based in the Pilbara region of Western Australia. The owners of Kader Boot Co, Kara and Nathan, were showcasing their boots to the stars at an Academy Awards gifting suite and asked me to go along to help them. It was pretty exciting rubbing shoulders with the stars.

I got a real buzz seeing the filming, etc. that went on in the streets in LA. It definitely reignited my passion for the arts. I’m pretty lucky I get to work on the land and have a creative outlet via social media.”

Since Jess has returned to station life, things have got even busier. Jess, like her fellow workers, can always look forward to a different work day, every day, which ensures plenty of great (and often quirky) stories to relay to her online audience. “For the next couple of months I’ll be managing 170,000 acres,” Jess explained. 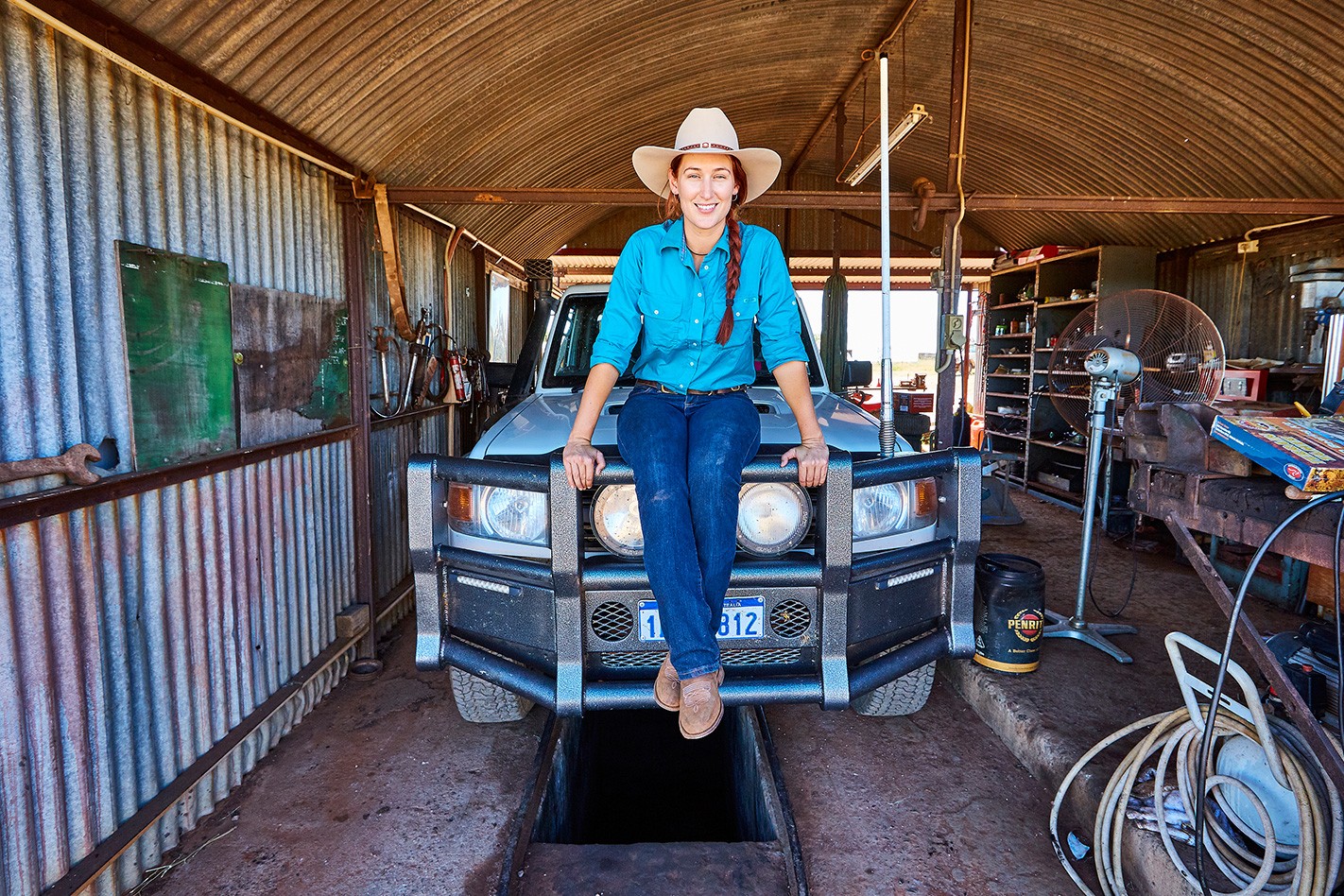 “Then I’ll be driving a road train for harvest season again. My duties on the station change every day. First priority is making sure the cattle have water, so I do a lot of bore runs. After that, there’s fencing, vehicle maintenance and, of course, mustering to be done. It’s often the little tasks in between that make for the adventure, such as snakes in cutlery drawers.”

As well as her busy station life and keeping her followers entertained, Jess is about to embark on another exciting project that, again, combines her love of social media and outback life. In November, 2017, Jess will team up with legendary 83-year-old mechanic, Allan Gray, and 4WD accessory brand, Terrain Tamer, to host a new mechanical video series. 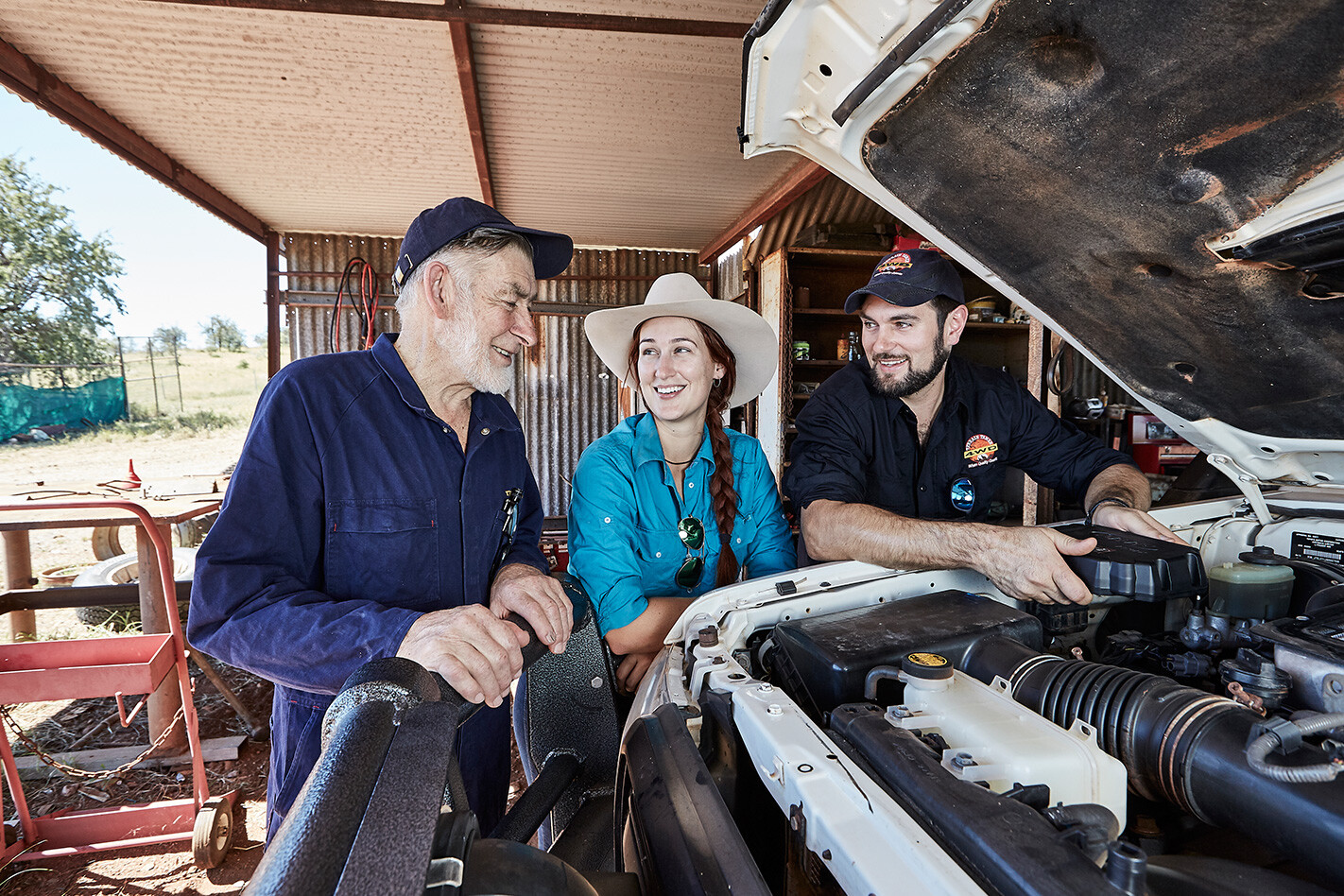 Like everything this well-grounded outback personality has been involved in so far, there’s little doubt the series will be a success and Jess’s audience will continue to grow.

When I asked Jess where she’d like to be in 10 years’ time and whether she could ever see herself leaving the country life, I received the expected answer. “I will always be involved with the land somehow,” she affirmed. “I could never live in the city; I’d go crazy, or crazier. No way would I trade that for traffic lights.”

We can only hope she doesn’t leave. As long as Jess is out there posting her latest adventure online, her urban-based followers will continue to gain insight into what happens beyond the shiny lights and myriad overpriced pubs and cafes of urban Australia.

That has to be a bloody good thing.