THE MID-NORTH coast of NSW is fortunate to have so many captivating coastal national parks and campsites, and one of these areas is the Yuraygir National Park. This park is a coastal treasure boasting stunning beaches, clear creeks and rugged headlands, and is part of the largest stretch (65km in total) of protected­ coastline in New South Wales.

From Sydney, take the Pacific Highway for 540km and you’ll eventually arrive at Coffs Harbour. Here you can stock up on last-minute supplies before leaving for Yuraygir. Coffs was once home to a booming banana industry, as evidenced by its famous landmark and tourist attraction, the Big Banana, which is visible from the Pacific Highway.

As you head north out of Coffs Harbour en route to the Yuraygir National Park, the blacktop will disappear after an hour. The real reason for visiting the Yuraygir National Park is to explore and experience the hidden camping treasure at Pebbly Beach. Unlike many popular campsites along the eastern coastline of NSW, the remote Pebbly Beach isn’t really advertised in any of the mainstream tourism publications. I’m not sure why this is the case, given it is probably one of the most beautiful campsites along the eastern seaboard – I can only guess that maybe it’s because you need a four-wheel drive to get there.

Low range is required to reach this idyllic stretch of coastline, as you will have to traverse off-road tracks, tackle a stretch of soft sandy beach, and then take on a creek crossing before arriving at this amazing camping location. I’m sure anyone who has been lucky enough to visit this piece of coastal paradise was pleased its location has been kept out of most tourist brochures, if only to keep the masses away. 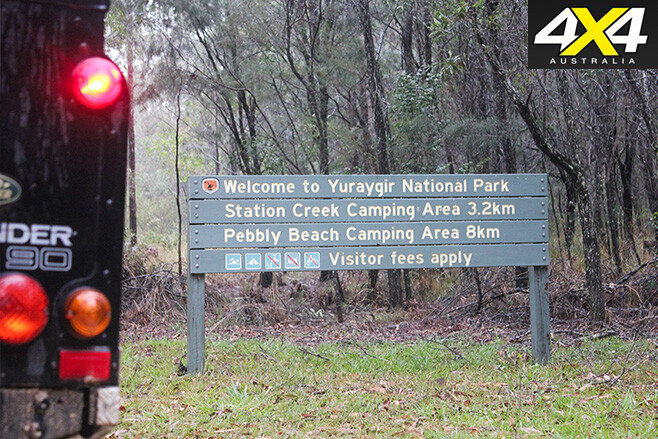 To access Pebbly Beach you’ll need to take the Barcoongere Forest Way turn-off, about 43km north of Coffs Harbour on the Pacific Highway. The Barcoongere track can be rough in spots, but you’ll soon arrive at Station Creek, where you’ll see the 4WD-only sign pointing in the direction of the Pebbly Beach camping area. If you decide not to continue to Pebbly Beach, you can still enjoy the area by camping at the secluded Station Creek campsite. You can even launch a boat at the southern end of the campground if you’re interested in doing a bit of serious fishing.

To continue to Pebbly Beach, follow the signposted 4WD track and you’ll soon hit the beach after negotiating a tight and bumpy sand track. It’s a good idea to check your tyre pressures here as you may need to drop them depending on how soft the sand is. You will soon hear and see the Pacific Ocean and the entrance to the beach – a beach backed by old Pleistocene dunes and interesting black swamps that attract plenty of birdlife. Pebbly Beach campsite is located at the end of a 2.5km beach drive, and beforeprogressing up the beach it’s advisable to check tidal times. The last hurdle before reaching your camping destination will be crossing a tidal creek, which should only be attempted at low tide.

After successfully negotiating the soft sand along the beach, there was just me, my Land Rover and a creek that separated me from getting to this campsite. It was late in the evening and the tide was in, so I had two choices: wait until the tide went out in the morning, or just go ahead and chance the crossing. First things first, I waded the creek to see how deep the crossing was. As I approached the middle of the creek it was up to my waist, but I knew it was manageable. So with that, it was out with the radiator bra and back in the Landy. I knew if I stalled in the creek I was in a bit of bother as I had no recovery vehicle to help me out should something go wrong, so as I dipped the Landy into the water I gradually built a decent-sized bow wave and slowly made my way across. This crossing poses no issue when the tide is out, so it’s advisable to time your arrival at the creek to coincide with the tides.

On the far side of the creek the Land Rover climbed up the steep sand bank; as it levelled off I began to see what all the fuss was about, as the sheer beauty of this camping location unfolded. Despite the fact it was raining a little and it was a bit grey, arriving here was like finding myself in the midst of a Photoshopped postcard.

After having a good look around and assessing the beach fishing options, it was time to pick a camping location, as the light was fading. There’s plenty of room to pitch a tent at Pebbly Beach, and there are a number of fire pits available. With the Pacific Ocean directly in front of you and two spectacular headlands to your left and right, you’ll be well-protected by the natural and picturesque cove that creates a truly stunning view. 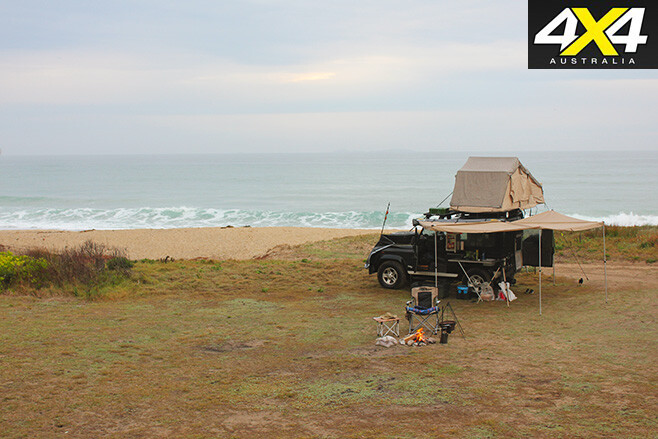 Camping fees are collected by park rangers who visit the campsite, and you can stay in the area for a maximum of 21 days should you have the time. It’s also worth noting that bookings cannot be made in advance and that vehicles are not permitted south of Station Beach.

I was very surprised to find myself setting up camp with just one other 4WD camped further up the coastline. For such an idyllic campsite it was very quiet, though I’m sure in the peak of summer it would be a different story.

The flat camping area is perched above the adjoining beach and the Pacific Ocean, and it has plenty of fire pits scattered throughout the cleared area. Most people who visit can enjoy an open fire to cook an epic bush feast, while enjoying a few cold beers as waves crash directly in front of you. 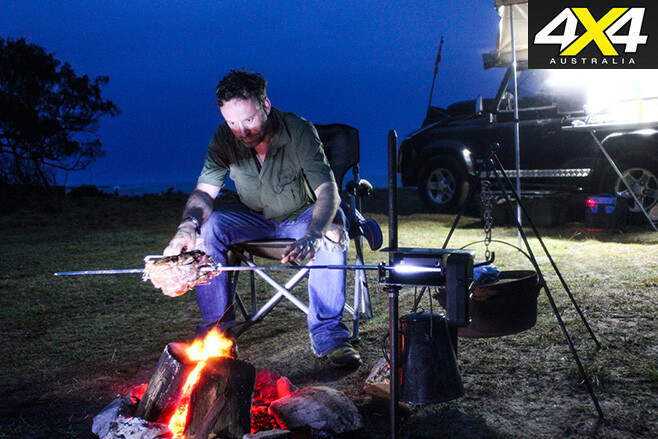 After setting up camp and getting the fire sorted, it was out with a cold beer and then a short trek up the vegetated sand dune that shelters the campsite from the west. The views from the top of the dune will give you an appreciation of the scale of this amazing campsite.

If you plan to do a bit of fishing you won’t be disappointed, with snapper, tailor, bream, mulloway, whiting and flathead easily caught off the beach, and after just 30 minutes I pulled in a decent-sized snapper for dinner. Yuraygir National Park has pleasant temperatures all year ’round, with hot summer days filtered by cool sea breezes from the Pacific Ocean. Other things to do in the park include bush walking, particularly in the northern section, with the Angourie walking track being very popular.

Beach driving is allowed on the main beach between Red Cliff and Brooms Head and along Sandon beach, while fishing is popular throughout the park, particularly at Shelley Beach and Brooms Head – and based on the speed of my catch, Pebbly Beach can’t be ignored. If you are there between April and October you might also be lucky enough to see a whale as they migrate along the east coast. The park’s isolated beaches, rugged cliffs, rainforests and wetlands also provide the perfect habitat for a variety of wildlife, including the endangered coastal emu, kangaroos, lizards, flying foxes, dingoes, goannas, snakes, and plenty of birdlife. With such an abundance of wildlife, it’s recommended not to feed the animals or leave food easily accessible.

This place is a paradise! Its stunning views, serene environment and amazing coastal camping can be enjoyed all year ’round, and on arriving here for the first time, you’ll feel that you have reached somewhere very special. I’m not sure how many people who visit Pebbly Beach for the first time return, but based on what I have experienced, I can only imagine that figure must be pretty high.

RESTRICTIONS AND PERMITS
Camping fees are collected by campground managers who will visit campsites. If you have time, you can stay for a maximum of 21 days. Day passes can be purchased from ‘pay and display’ stations. Bookings cannot be made in advance. Note: Vehicles are not permitted south of Station Beach. 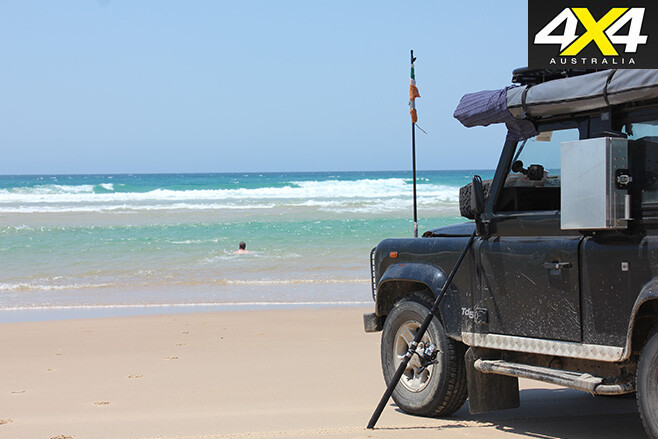 BUDGET ATTRACTIONS
The campsite is located right on the beach, so you can fish, surf and swim in some of the sheltered waterholes.

STAYING THERE
Pebbly Beach campground is located in the Yuraygir National Park, 20km from Corindi Beach and 57km from Grafton. The campsite at Pebbly Beach is located right on the edge of the beach, with access by 4WD only. ROAD CONDITIONS
Low range is required when driving on Station Beach, as the sand can be soft. There’s also a creek crossing at Pebbly Beach and you should only attempt the crossing at low tide. Overall, the area is accessible with a standard 4WD.

FUEL & SUPPLIES
Grafton has plenty of service stations and shops, so pick up food and water here.

GETTING THERE
Yuraygir National Park can be found on the NSW North Coast. Station Creek is approximately 58km from Grafton.