Fraser Island gets most of the fame, but as Glenn Torrens and Norm Needham discover, a trek to Moreton Island offers similar fortunes.

Mention a 4WD island adventure and most people immediately think of Queensland’s popular Fraser Island. Yet Moreton Island offers a similarly beautiful setting for a weekend (or longer) trek – and for many adventurers, it’s a lot closer than its northern neighbour Fraser.

Although it borders and protects Moreton Bay just off the coast of Brisbane, Moreton Island takes longer and costs more to get to. But once you’re there, it offers stunning slices of sandy, sub-tropical paradise. Moreton is only about 35km from north to south and a little more than 10km wide, so if your idea of a trek is to drive over everything at 100km/h then you’ll be soon bored.

Moreton, like most worthwhile destinations teeming with nature, is a place that rewards visitors who take the time to slow down, look around and take a walk.

After rolling off the MICAT ferry, a long weekend on Moreton begins with a quick look at the Tangalooma wrecks before heading north up the hard-packed beach toward the island’s ‘capital’ of Bulwer. Like any beach drive, the tide can be tricky so if it starts to close in, drop the tyre pressures and take a right onto the sandy ‘high tide’ access track south of Bulwer.

Like many remote-area townships, Bulwer is home to a few friendly locals, and a place to stop for a much-needed cool drink, light meal and a few grocery basics. Accommodation is also available for those looking for a hot shower and a night in a bed, with a range of units, beach houses and ‘glamping’ sites – it’s in a lovely sheltered location on the island’s north-west and close to many of Moreton’s beach-side campsites adjacent to Combuyuro Point.

Bulwer is also an obvious kick-off point for exploring the north of the island. After a beautiful drive through some relatively high country and past Five Hills Lookout, the Bulwer-North Point Road passes the Yellow Patch area (one of the island’s five camping zones, in addition to its designated camping areas) to Cape Moreton. There is plenty to explore here, including the lighthouse and surrounding headland.

The headland, which the lighthouse is built on, is the cause of the island’s existence. Over millions of years, slowly migrating sand, washed in by the incessant action of the Coral Sea, has built up behind it. The lighthouse was Queensland’s first and was built using convict labour from locally quarried sandstone in 1857.

These days it’s automatically operated, so the adjacent cottages are listed by the National Estate, but in the past, there have been enough government and other workers living here to sustain a school. It’s a great spot for whale-watching, so check the season and bring your binoculars.

By the headland are the park-like campsites of North Point. Toilets are provided and the sites here are bollarded, which may affect vehicle-based campers. The adjacent Honeymoon Bay is an intimate cove tucked into the brilliantly coloured rock headland. It faces north so it’s beautifully sheltered – take a towel but wear stout shoes as the rocks can be harsh.

Heading south-east from the headland, crossing Spitfire Creek, delivers you onto the eastern side of the island, with its glorious beach-side designated campsites scattered along terrific white sand. Although facing south-east and open to the breeze, some of the sites are tucked under trees and into stable dunes to provide a terrific vista for overnight stays.

Blue Lagoon isn’t too far down the eastern shore and is another great place to stop and soak up some beauty and tranquillity. It’s right next to the Bulwer/Blue Lagoon Rd which links back to Bulwer.

Sitting further south, overlooking the eastern shore, sits the Rous Battery gun placements which stand as a reminder of past hostilities. In 1943, a Japanese submarine torpedoed the hospital ship Centaur off Moreton, but the slowly crumbling bunkers are at odds with the natural beauty of the place.

Also in the southern part of the island are the dunes of Big and Little Sandhills. Sand tobogganing is a hoot for the kids here and you can also have a lid-skid on the western shore near where the MICAT ferry arrives and departs.

Kooringal is the island’s southernmost village and like Bulwer, it’s in a terrific little setting on the inland side of the island. It’s an array of summer holiday homes/beach houses with a few permanent residents. There’s also the Gutter Bar, a shop and pub, with an adjacent eatery that serves up a legendary seafood platter during peak months.

Onto the eastern beach, be wary as it can be treacherous if you get the tides wrong. Eventually you reach Middle Road to traverse the island. Middle Road is two tracks – one each for east and west traffic. Moseying along this track will project another of Moreton’s distinct and beautiful environments – bushland of majestic reddish-barked gum trees and banksias.

Middle Road also leads to the western side of the island, not far from the Tangalooma resort. The resort is a private area and as vehicles aren’t permitted to drive on the shore adjacent to it, there’s a back-track around it.

One of the most enduring images of Moreton Island are the Tangalooma wrecks. Fifteen old ex-government boats were deliberately sunk on the western side of the island to form something of a haven for small crafts.

There is an element of both adventure and faded glory when exploring the rusting hulks and it’s a terrific area for a snorkel and a swim, with the ships close enough to the shore to swim out to. The crystal-clear water provides the perfect spot to visit the habitat of local marine life and coral formations. Dolphins also frequent the area.ere are more scattered remains of sea-craft closer to Bulwer, too, and they provide a foreground as you watch the sun go down over Moreton Bay and the mainland.

Moreton Island is the perfect place for a long weekend away, or an even longer, relaxing stay in this beautiful environment. 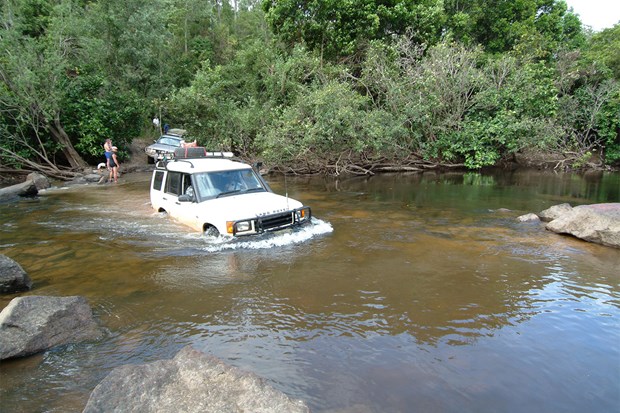 Exploring Cape York Peninsula has never been so easy. Ron and Viv Moon share their tips to the tracks of the Queensland oasis. 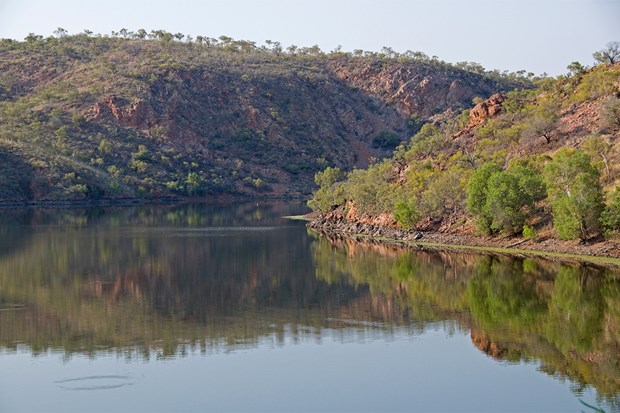 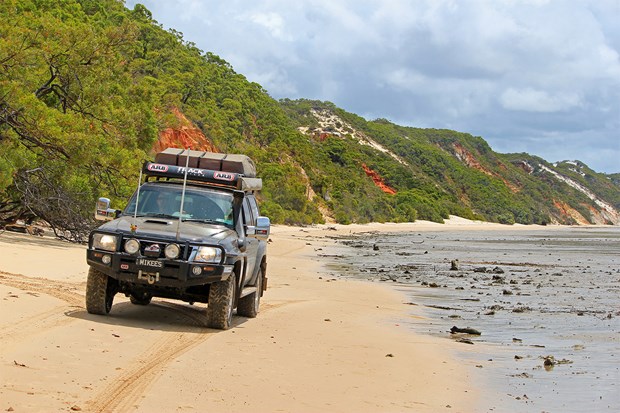 Elim Beach within the Hope Vale Community of Cooktown offers much more than just Coloured Sands. 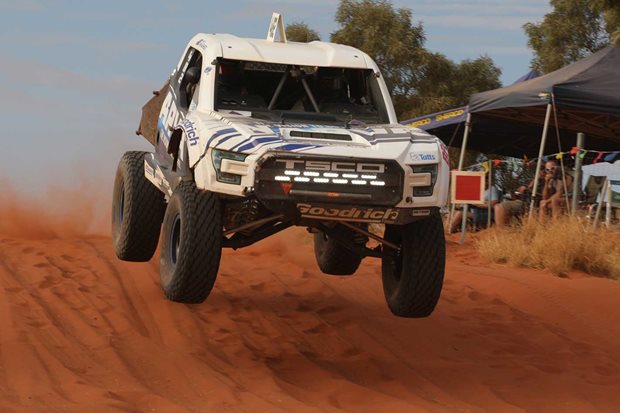 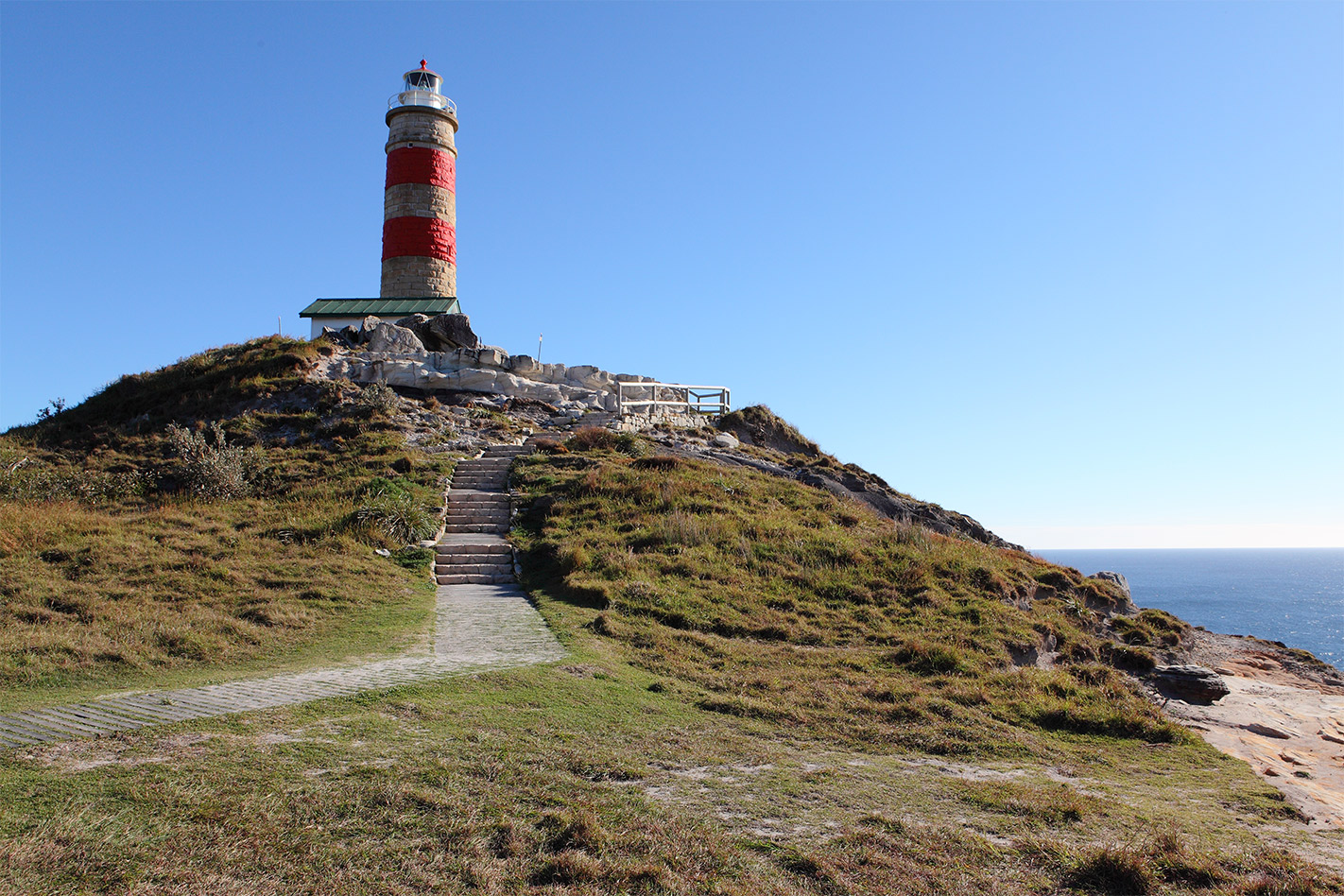 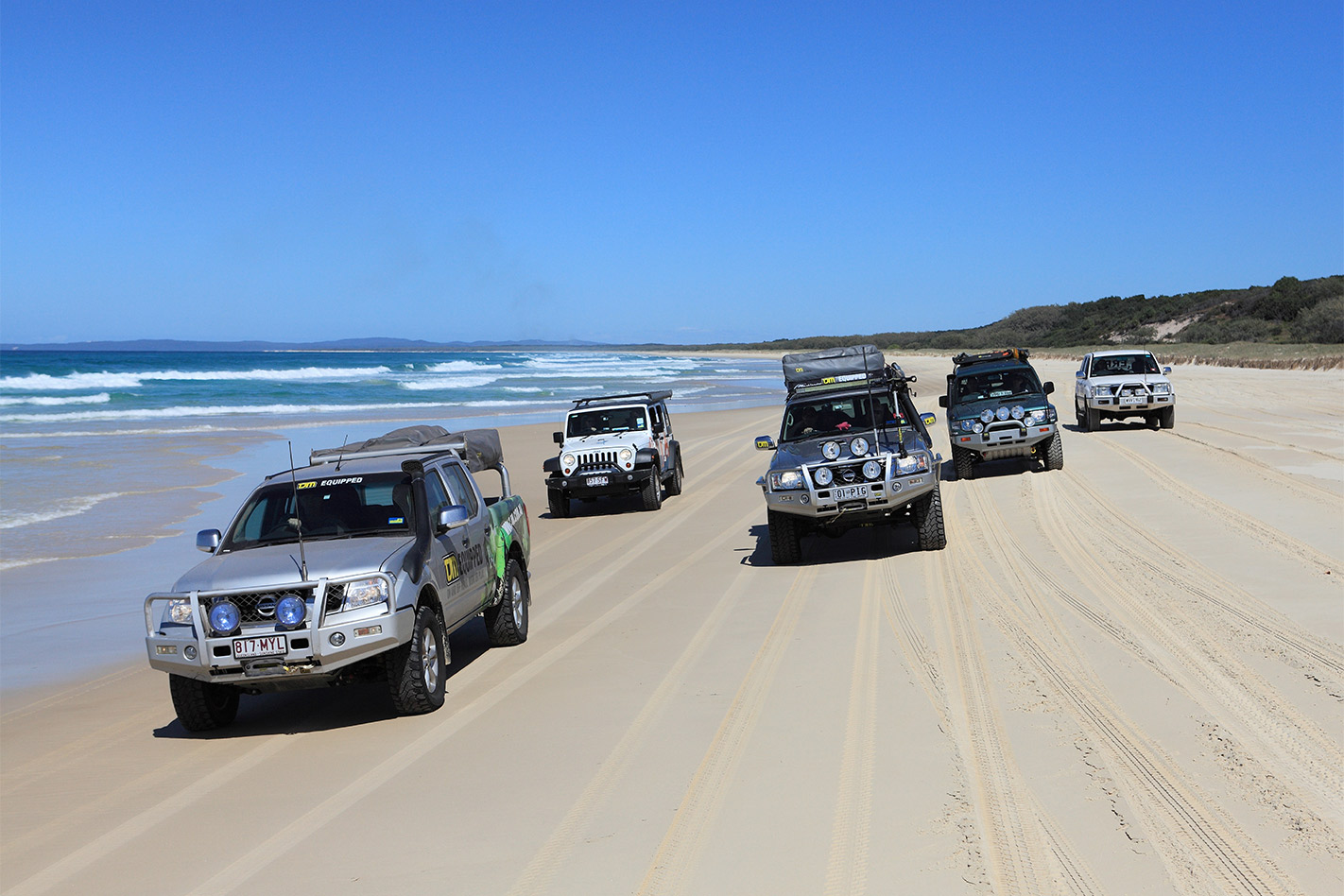 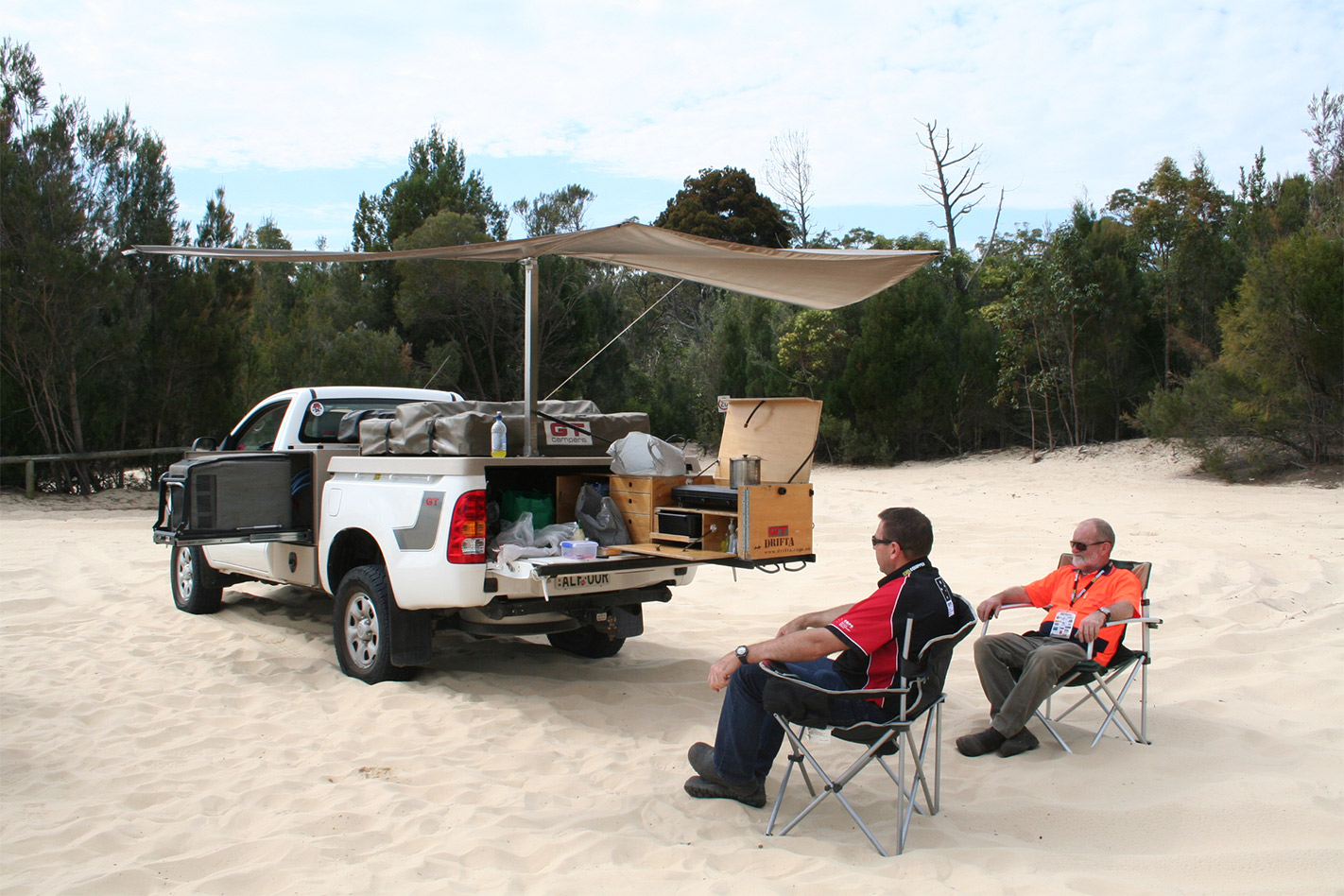 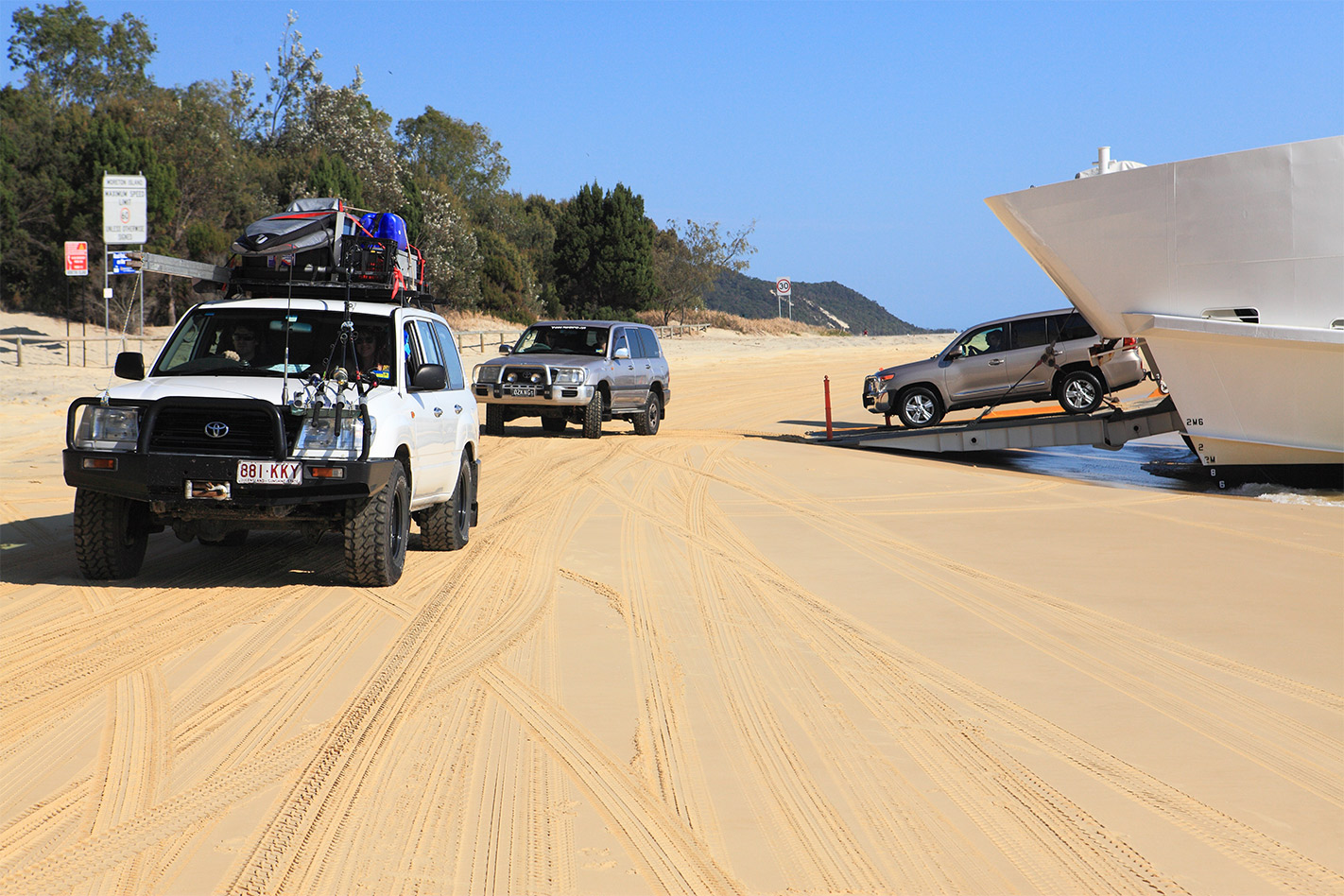 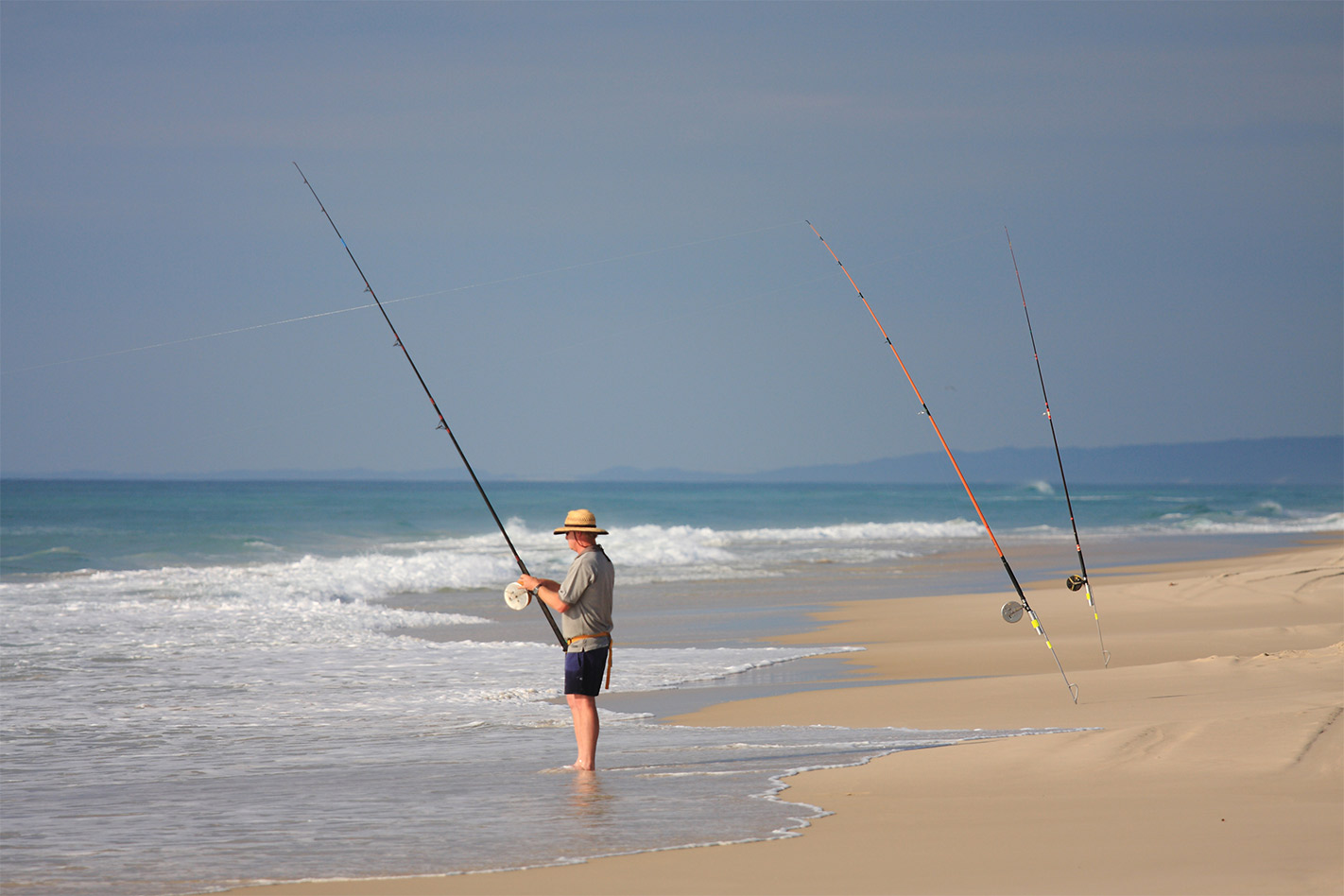 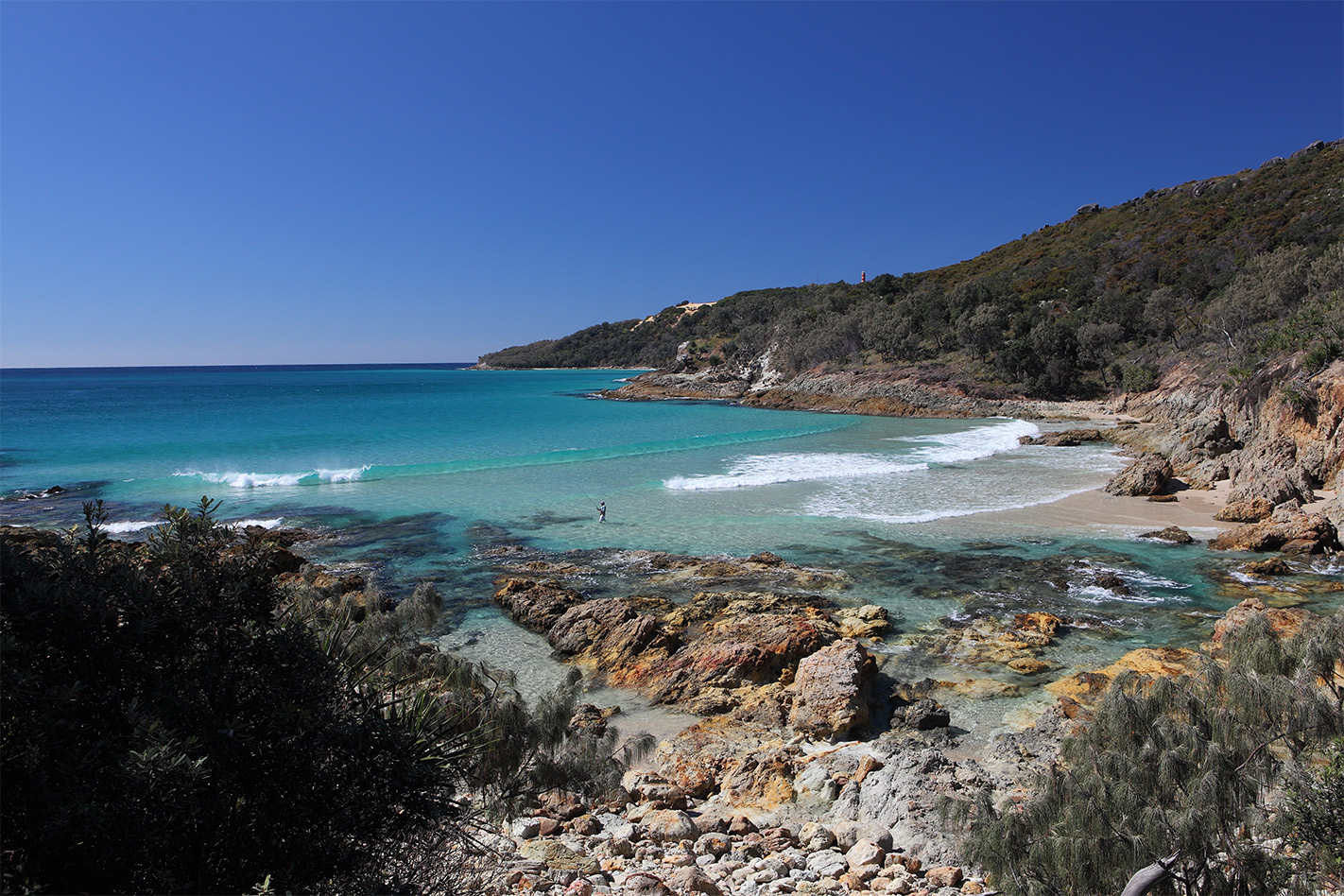 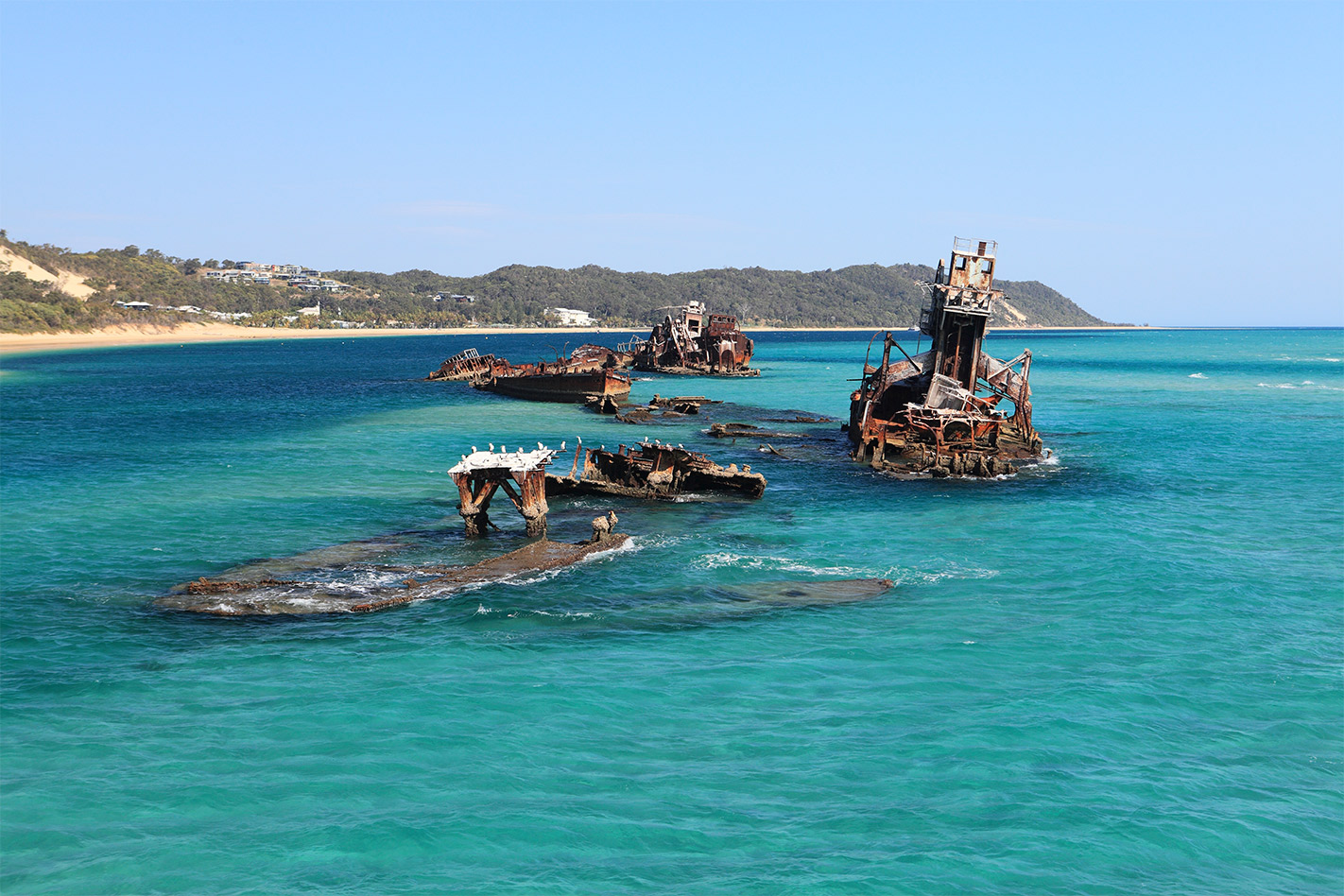 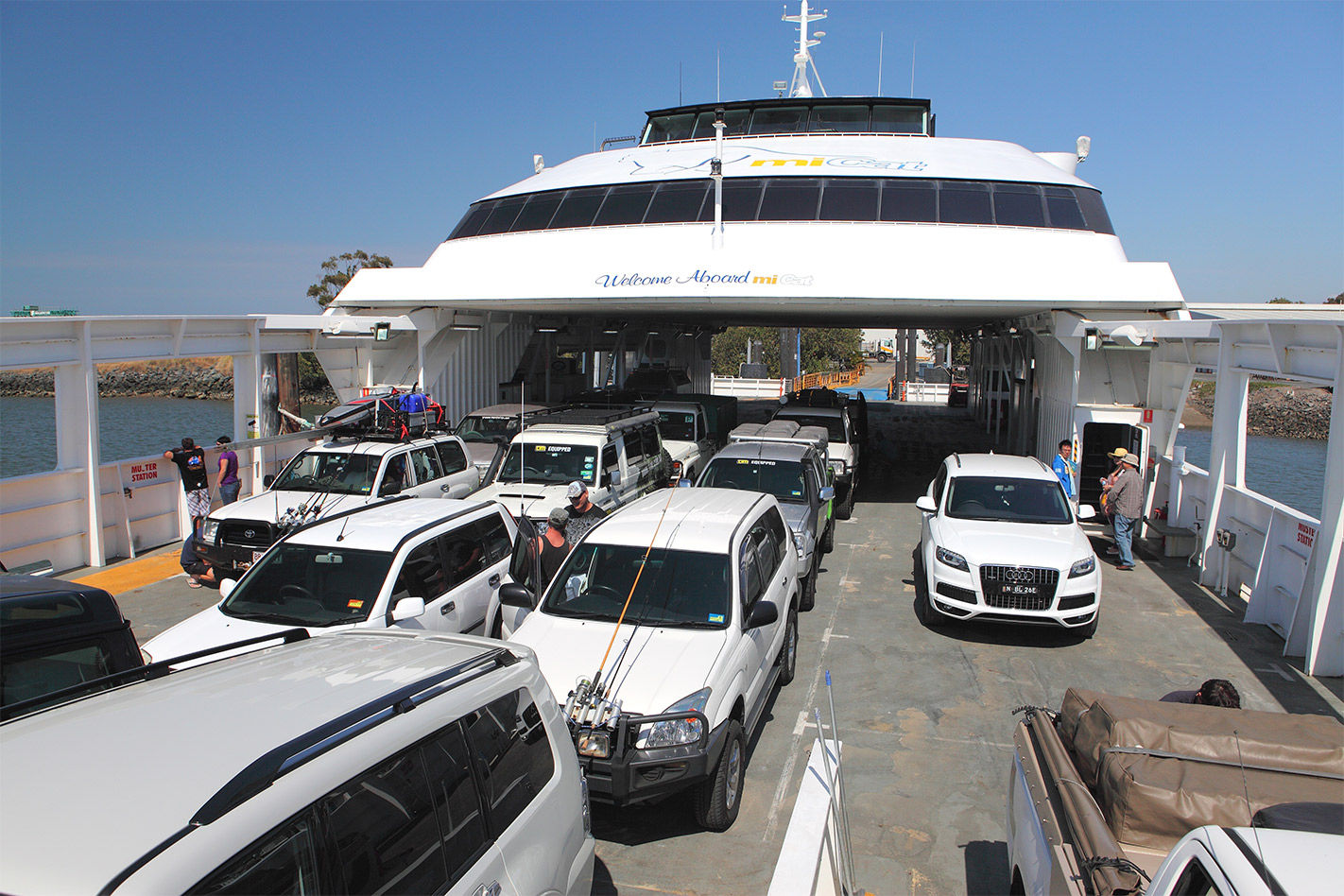 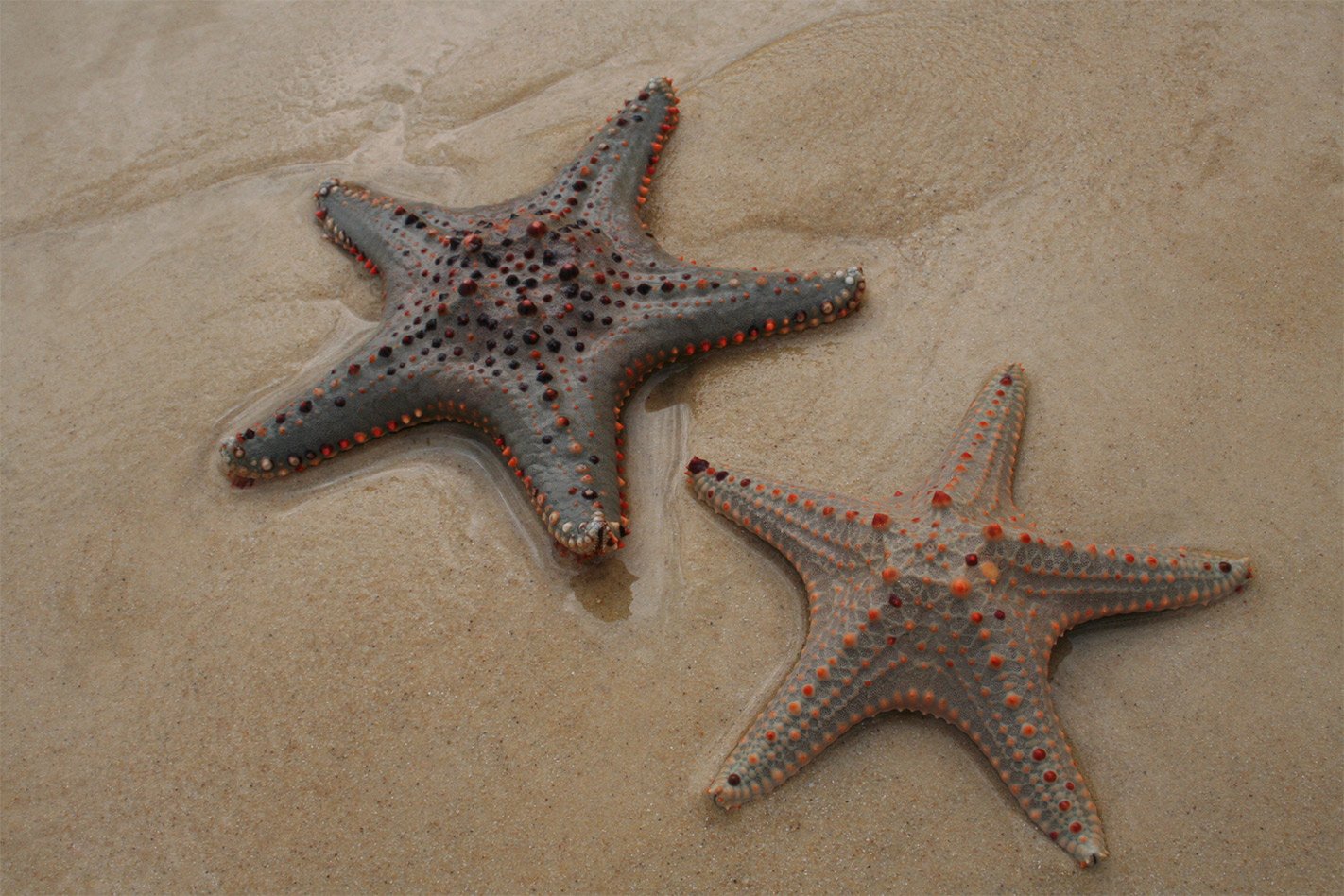 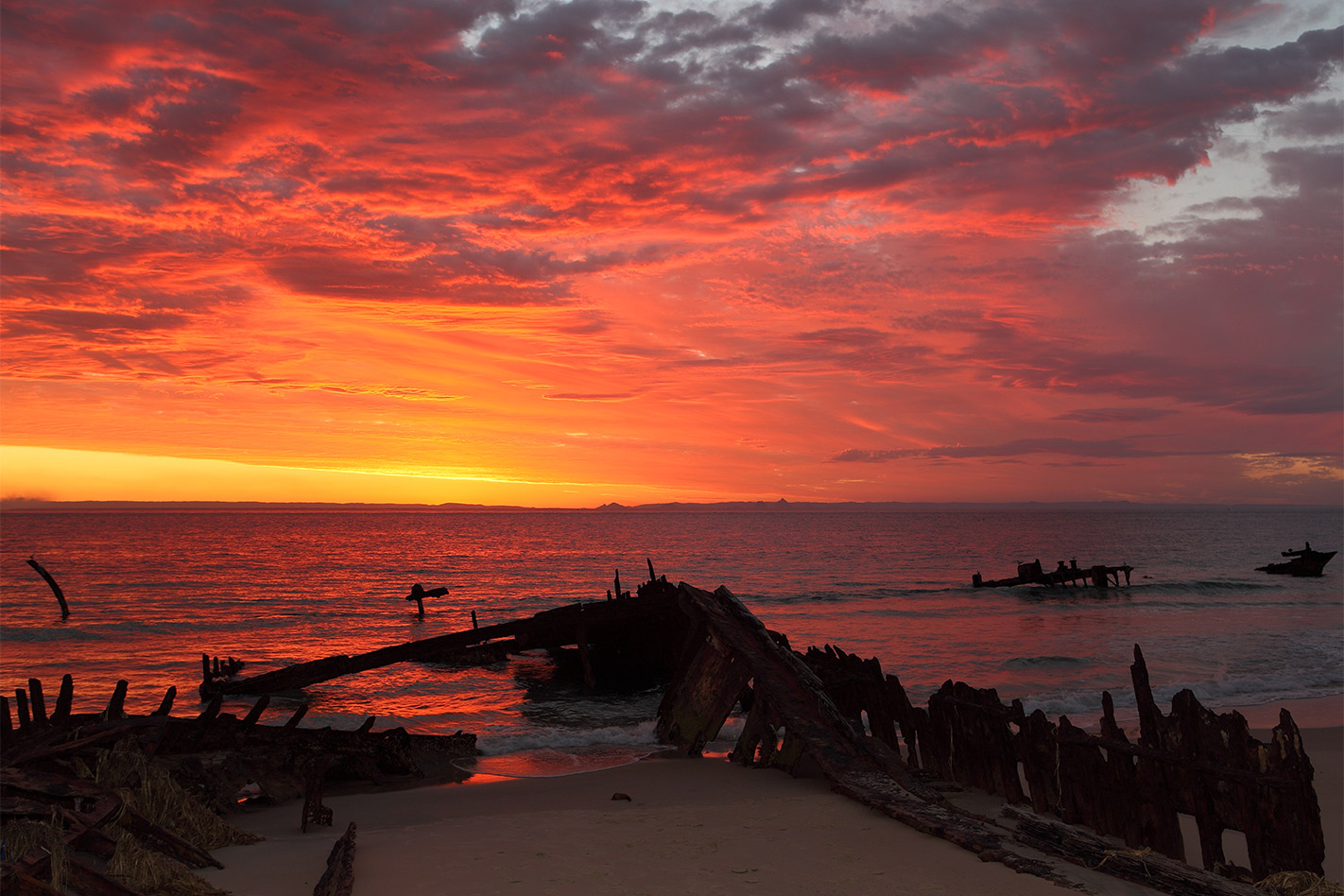