The Murray-Sunset NP is Victoria’s largest national park, and covers some 6770km² of sand dunes, mallee scrub and saltbush plains in the far north-west of the state.

The route we traversed starts easily at the near-deserted Nowingi, about 44km south of Mildura on the Calder Highway. Originally, the track had followed the old railway alignment west across the Raak Plain when gypsum had been hauled from the normally dry lakes. Today, the built-up route is one of the easiest ways to access mallee country and the national park.

Less than 40km from the highway is Rocket Lake, the biggest lake in the area. You can camp beside the lake, with a good view over the lakebed and, while the lake is normally dry, the track across the lakebed is officially closed to traffic, as it can get extremely boggy when even just slightly damp. 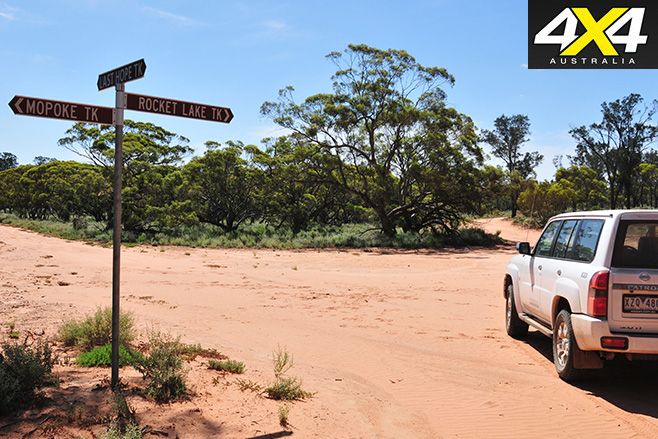 From the southern edge of Rocket Lake you can head in any direction, but to cross the desert we prefer to head south on Rocket Lake Track to Last Hope Track and Mopoke Track before heading into Mopoke Hut.

This hut is hardly an oldie but, being built in 1962, it still harks back to a time when cattle was mustered and driven south by local graziers. The hut has been renovated by the local 4x4 club and the small camping area behind it has fireplaces, tables and a toilet. This is an enjoyable spot to spend the night and the area has a rich variety of birdlife to enjoy (more than 300 species of birds have been recorded). Remember to collect firewood from along the tracks at least 1km away from camp. This will help preserve the area around the hut. 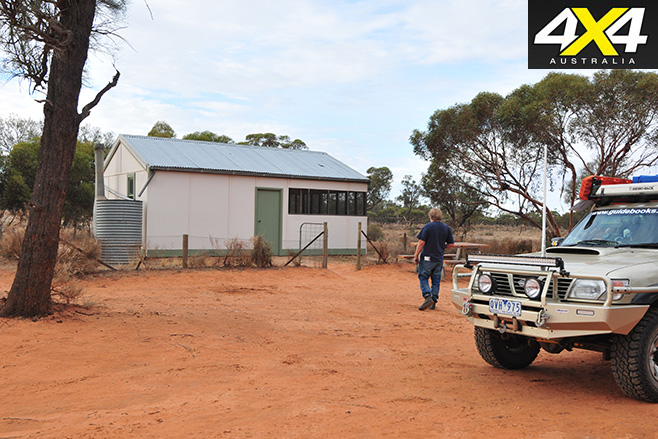 From here, the track south to Honeymoon Track and west to Honeymoon Tank is a sandy run. From the tank, you can head north to Mount Crozier, which, at a whopping 90m, is the second highest sand dune in the park. The highest dune in the region is also in the south-eastern area of the park: the 105m tall dune found along the extension of the Mopoke Track and south to Mount Jess is staggering (okay, I’m jesting a little).

Back at the base of Mount Crozier there’s a pleasant camping area tucked in among the scrub. There’s also a walking trail with a short, steep set of sandy steps up to the crest of the dune. From its lofty summit, there is an expansive view of, well, just scrub; the view has not changed for millennia! 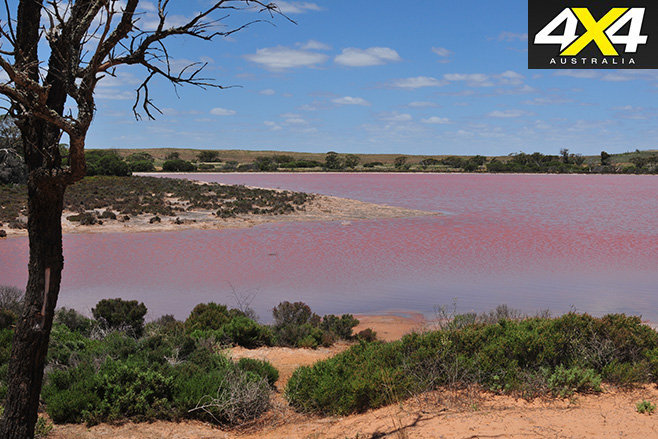 At the track junction near Honeymoon Tank, you can also head south to the Pink Lakes section of the park. This is the oldest protected area (declared in 1979) of the now much-expanded national park. Around the Pink Lakes there are a number of camping areas but, as this area is easily reached from the Mallee Highway a little farther south, the camps are often occupied.

Still, while you are in this area there are a few good walks to enjoy around the often water-filled lakes and along the old tramlines that once carried salt. On the north-eastern edge of Lake Crosbie, an outdoor ‘salt museum’ displays a few relics from bygone days, with information boards to explain what went on. 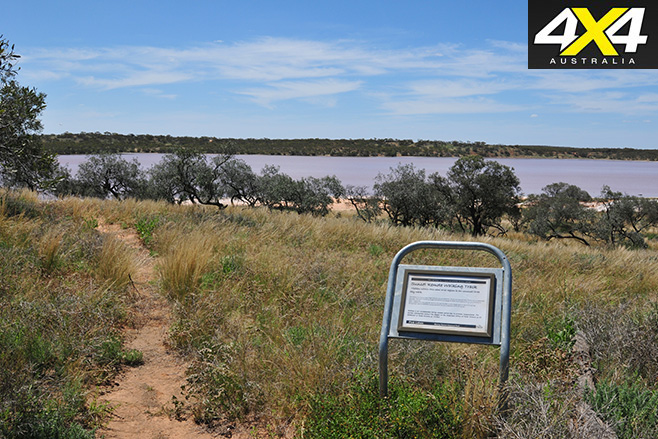 From near Lake Crosbie, you can head north on Grub Track to Honeymoon Track again and then dodge around some largish salt lakes, some man-made tanks and an impressive set of cattle yards beside the track. At the yards you’ll join Sunset Track for the 45km run west to the park boundary. The track is sandy in places, skirting through some different vegetation types (there are more than 600 species of plants in the park). You’ll often see kangaroos through here, too, especially in the more open areas, and small mobs of feral goats.

At the western edge of the park you’ll find the Rockholes Track, which leads north to a once-important Aboriginal watering point that is still important for bird and animal life. Sadly, you can’t camp at the Rockholes, but nearby there are plenty of spots to throw down a swag, or to park the camper. 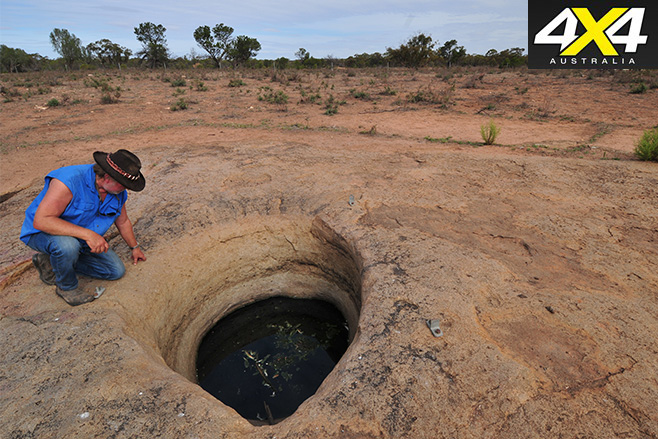 From the Rockholes (we’ve only ever found a ‘rockhole’), you can head north and west to follow the Border Track north or, like we did, turn south to end your adventure at Murrayville on the Mallee Highway, just 21km east of the South Australia-Victoria border.

TRAVEL PLANNER
Nowingi on the Calder Highway is 490km north-west of Melbourne. It has no facilities.

Murrayville is 110km west of Ouyen on the Calder Highway and 245km south-east of Adelaide, SA. It has fuel, a store, a good pub and a small pleasant caravan park.

The best map for the region is Meridian’s Victoria’s Deserts 4WD Map.

The best book, which covers the whole region, is Mallee Tracks by Jill Nickolls and Anne Angel.

The best time to go is in early spring for the wild flowers, but anytime except high summer is fine. 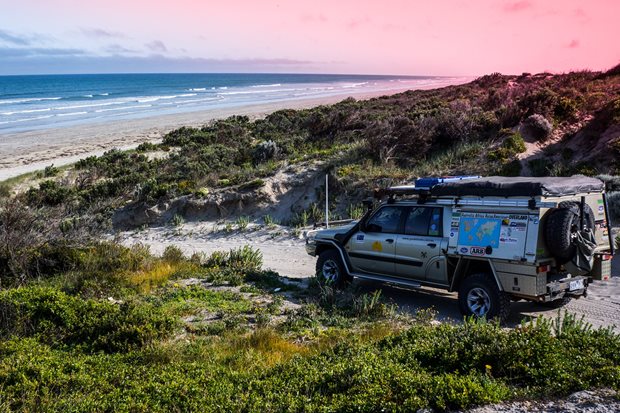 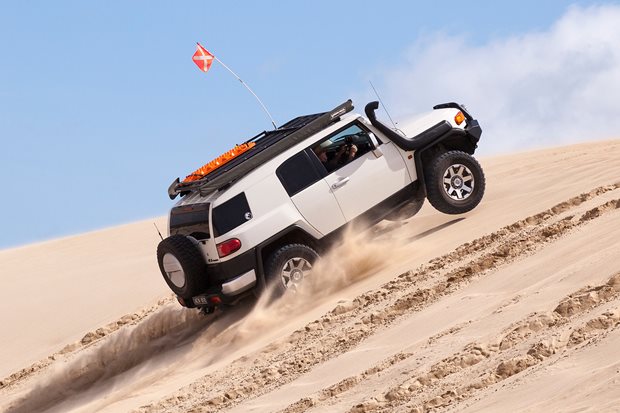 The Portland Coastal Park is the only place in Victoria where you can legally drive coastal sand dunes to your heart’s content. 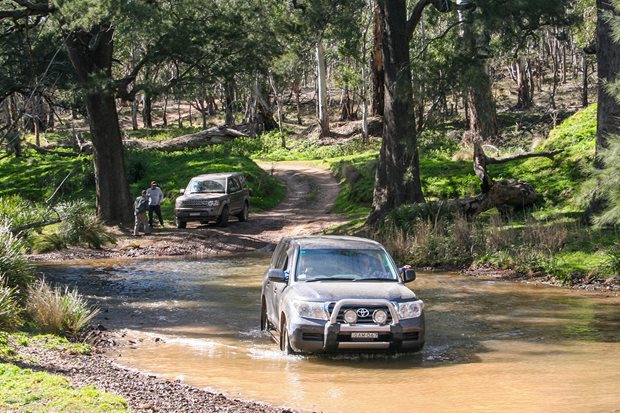