GEORGE Separovich of Blown Motorsports in Western Australia is a racer, car builder, jack of all trades, and just happens to build the absolute baddest blown and injected V8 engines in the country. Seriously, asking this guy to build you a donk would be like asking McLaren to build you a road car.

George first hit the limelight with a legendary burnout at Motorvation in 2004 with his stunning blown and injected, small-block Chev-powered HK Monaro. It was in a class of its own back then, and George has had a bunch of tough cars since, while also building engines for many of the modern burnout champions. Just take a look at Justen Brown’s legendary WONAGO VG ute, for example. 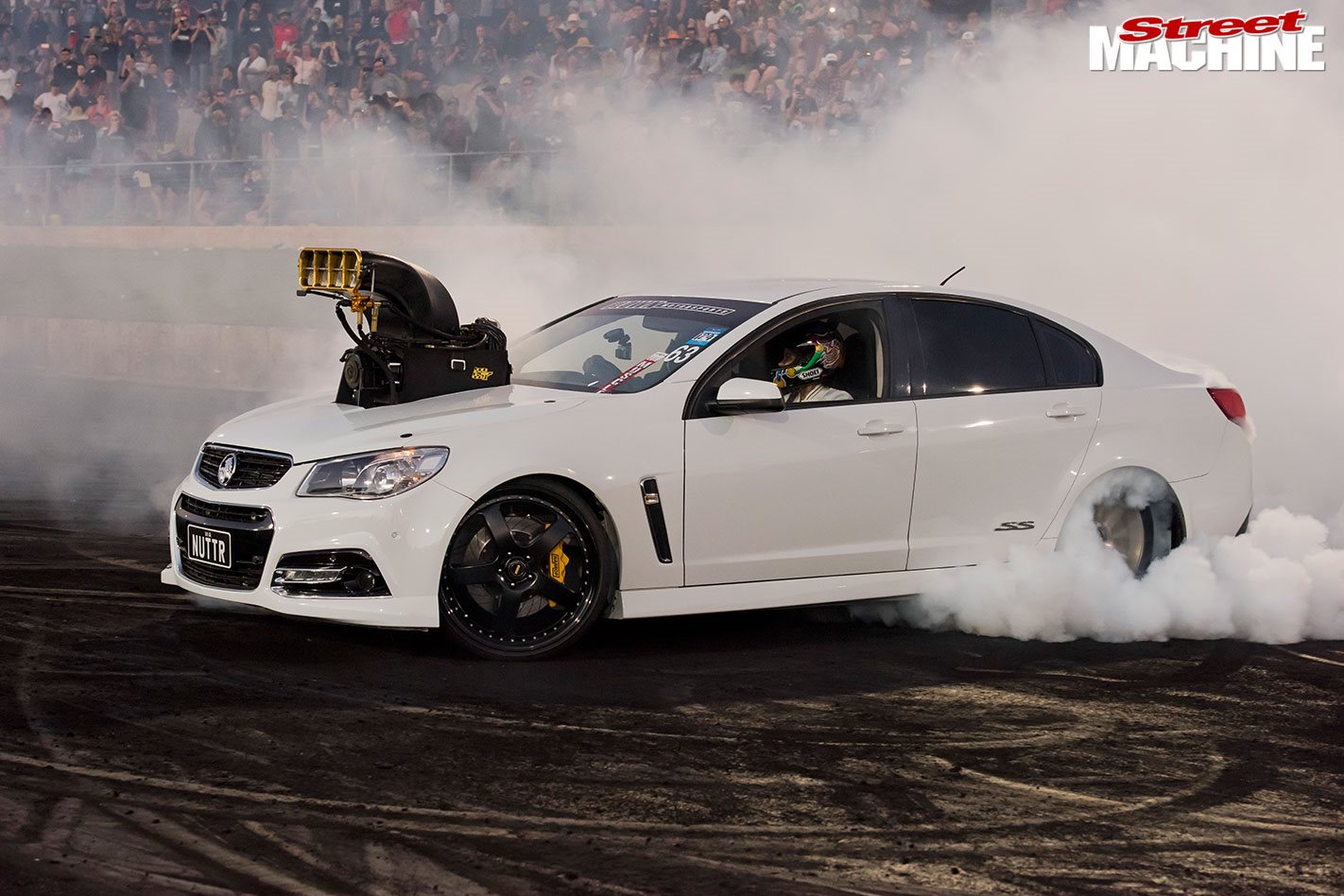 For George, perfection has no boundaries, and his motors are famous for massive revs and boost, perfect tune-ups and, above all, incredible reliability. One only has to look at Matt James’s incredible efforts at Summernats 31 in 2018, when he claimed first and second in the Burnout Masters in two different cars, both with Blown Motorsports-built engines.

NUTTR blows the supercharger off during 10,000rpm burnout - video

Bigger is always better in a blown motor – except when it comes to cubic capacity. So when this maestro decides to build a bit of a skid pig for himself, you know it’s going to be a kick-arse, small-cube deal. Who other than Separovich would put a PSI blower on a 305ci Chevy small-block – and have it make an awe-inspiring 1300hp and buzz to 10,000rpm? That’s just what he did with his current skid weapon, a VF Commodore SS called NUTTR.

“Those PSI blowers are just an air pump,” George reasons. “I could get one to work on a lawn mower if I wanted to. Everyone else couldn’t get it right, so I was determined to run one.”

George came to own the VF back in 2016. “Justen Brown owns Fordhold Wreckers nearby, and he was in my ear constantly and wanted me to do a VZ,” he explains. “The new car came up by pure accident. He rang me one day and said: ‘Got you a VF; it’s only got 13K on it and it’s got a light tap in the front.’ He took the driveline out, we sent it to the panel shop and Greg Ducker from Ducker Race Cars started on the front end. Then the boys at Black Magic Race Cars got to work on doing a rear end, with people telling me I gotta skid it.” 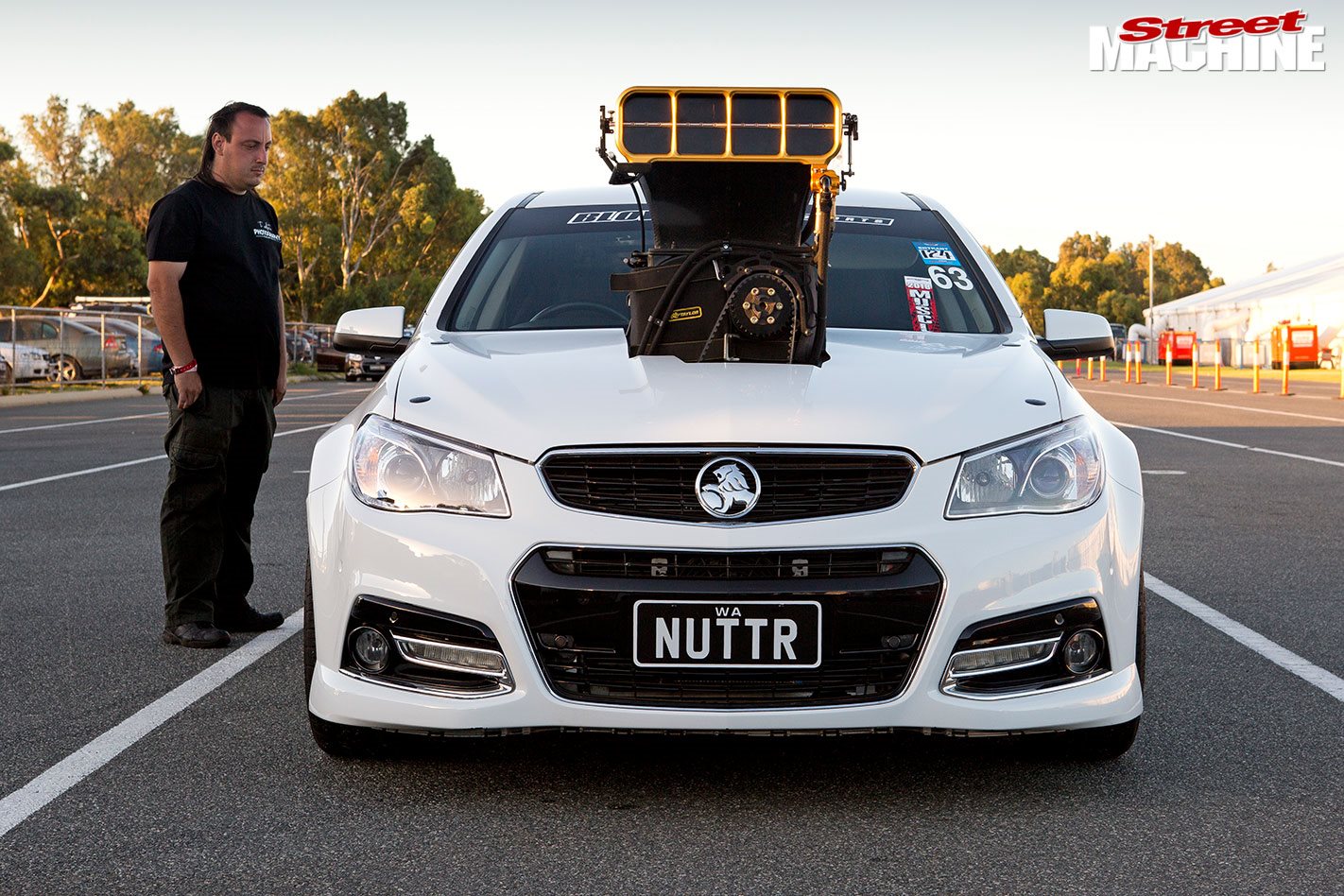 A few years back, George had raced a blown small-block Torana in CC/Gas, which ended up running 7.19sec and 192mph. It was powered by a 305ci Chev with 50psi of boost through a PSI blower, and made more than 1700hp. The car was sold a few years back, but George still had one of the engines left over from that era, which is how a similar combo ended up in NUTTR.

When it comes to burnout cars, George is a fan of small-stroke, big-rpm combinations. “I destroke everything I build; for big revs, smaller is better,” George says. “These guys running big-cube burnout deals will always struggle to keep the rods in them and generally think it’s the engine builder’s fault when they rod themselves.”

In keeping with George’s philosophy, the motor in NUTTR is tiny by modern standards at 4.9 litres, packing a Crower crank with a big-block Chevy snout and a 2.85-inch stroke. Unlike most burnout set-ups, the motor is running GRP aluminium conrods with big-block gudgeon pins and Crower .903in lifters in bronzed lifter bores. With such a small stroke, the mill happily revs to over 10,000rpm, so naturally it runs a four-stage dry sump (three suction, one pressure). 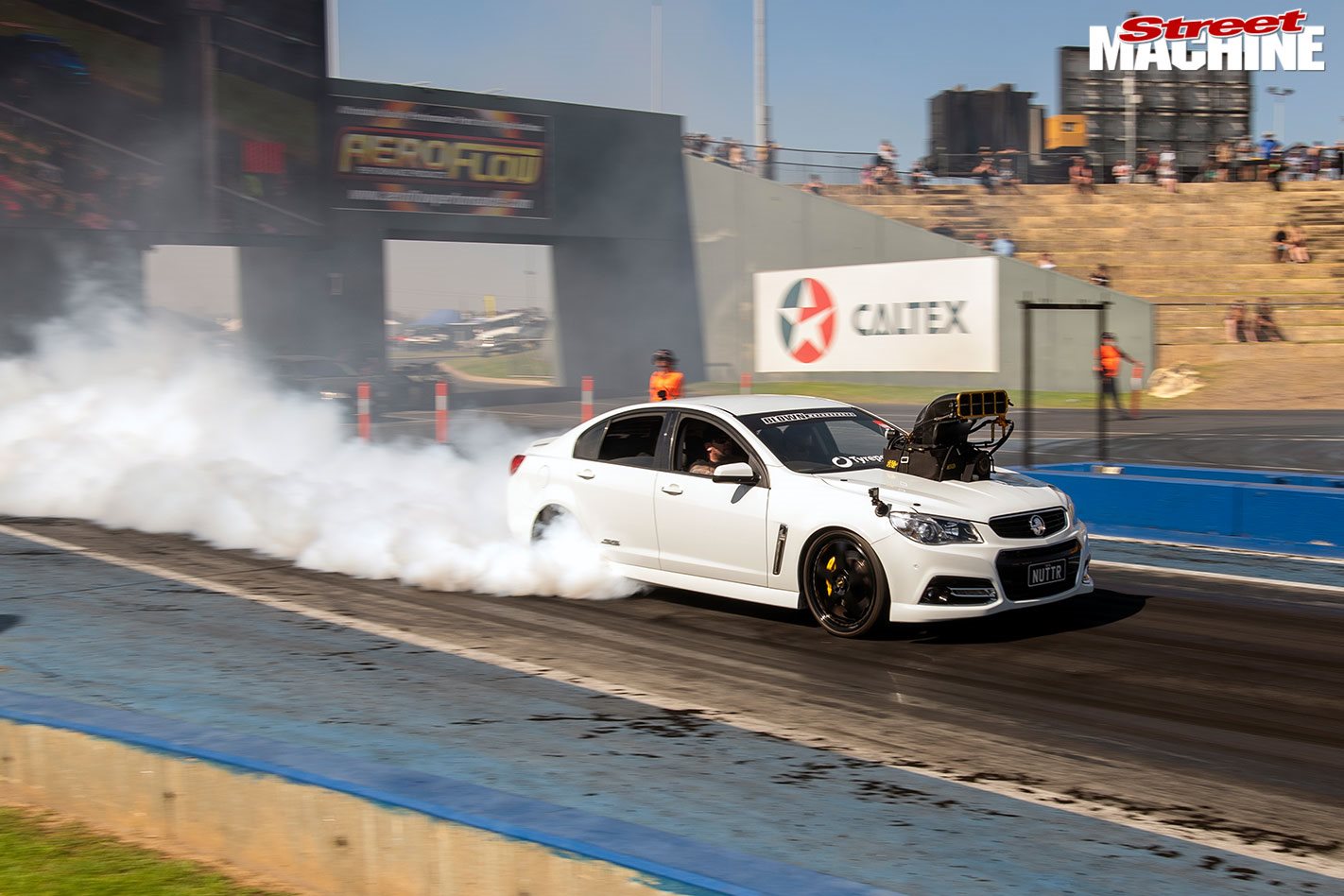 “The key to keeping these motors alive is to not use a drag-racing valve spring that gives you 550lb on the seat and 1.700lb open,” George says. “I use PAC endurance springs, which won’t break; they just start to go off when they get tired. Right now I’m running 35psi of boost, which is all I can get out of the blower with the RCD crank support I use and the blower guard. I figure the motor is probably making around 1300hp, which is enough for what I’m doing.”

Maintenance-wise, this thing is mint. It’s a combination George has used for years, is rock-solid in the valvetrain and the rods seem to last forever.

“The first couple of times I ran this combo I had a few issues,” George admits. “It was my fault; I was being a tight-arse and tried to use an Enderle 110 vane pump, and they seem to run into all kinds of issues over 8500rpm. At 10,000rpm when you’re pumping the pedal hard, the pumps just don’t seem to recover fuel pressure fast enough. I suspect the pump was cavitating. I was sure I could fix it without buying a better pump and tried working around it, but in the end I was flogging a dead horse – one cylinder would run away and it would bang the blower. I had to stop being a tight-arse and buy an Aeromotive 15-gallon pump.” 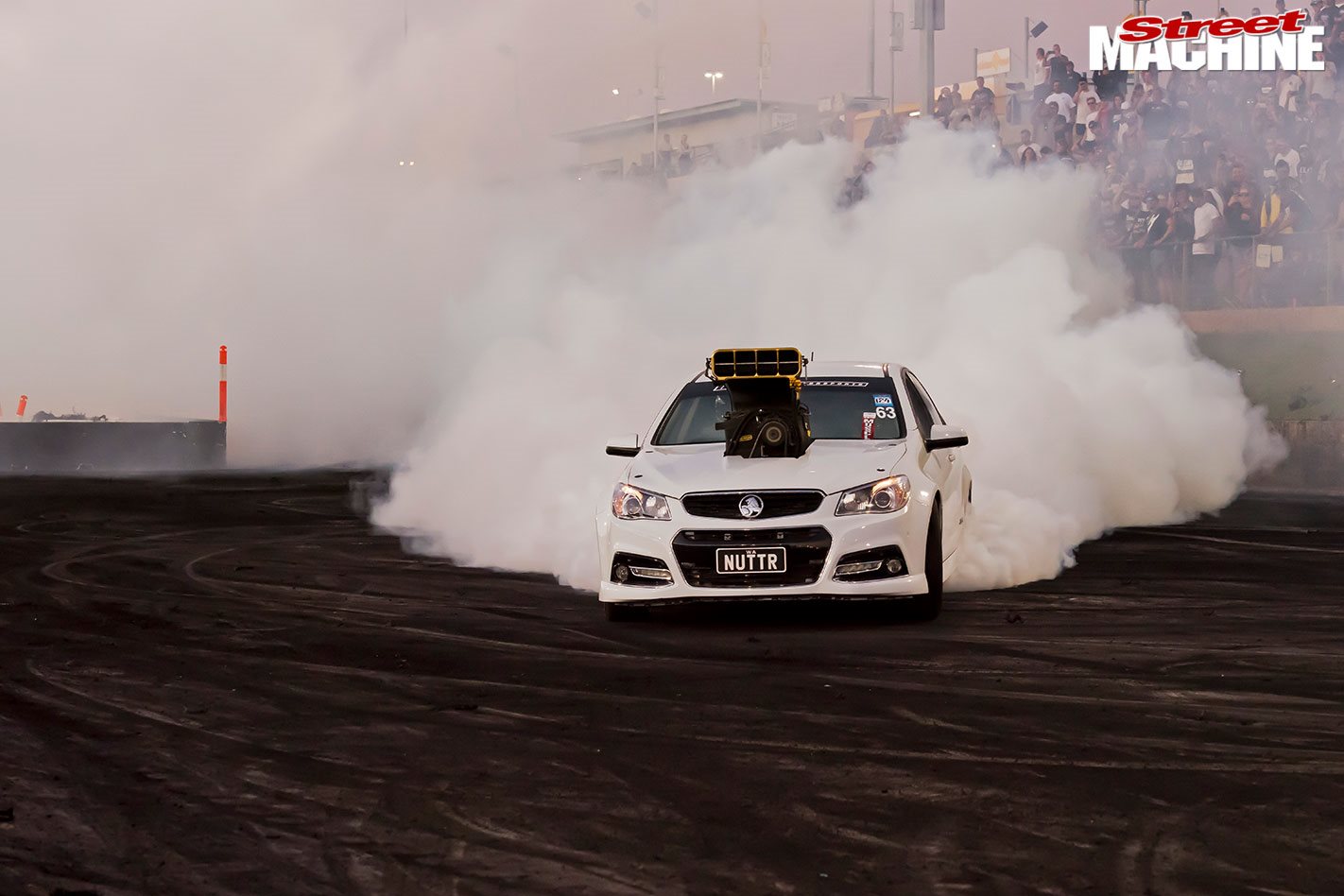 The only other issue George has run into with this set-up was with the points box on the MSD Pro Mag. These are usually designed to run for short periods of time, not at 10,000rpm for a minute and a half. “The box was frying itself and we were losing spark,” he says. “It took a bit of messing about, but I finally found someone who could put the internals of a 44-amp box into my 20-amp mag set-up – problem solved.”

Backing the mega-mill is a Reid-cased Powerglide with a locally built 10-inch converter, and a nine-inch rear end. “The rear end is a Speedmaster housing and axles set-up,” George says. “I destroyed the axles straight up and replaced them with some better stuff, but the housing is strong and the centre section is still hanging in there with some good bearings and Richmond 3.7:1 gears.”

So what’s the biggest mistake you can make with a blown and injected car? 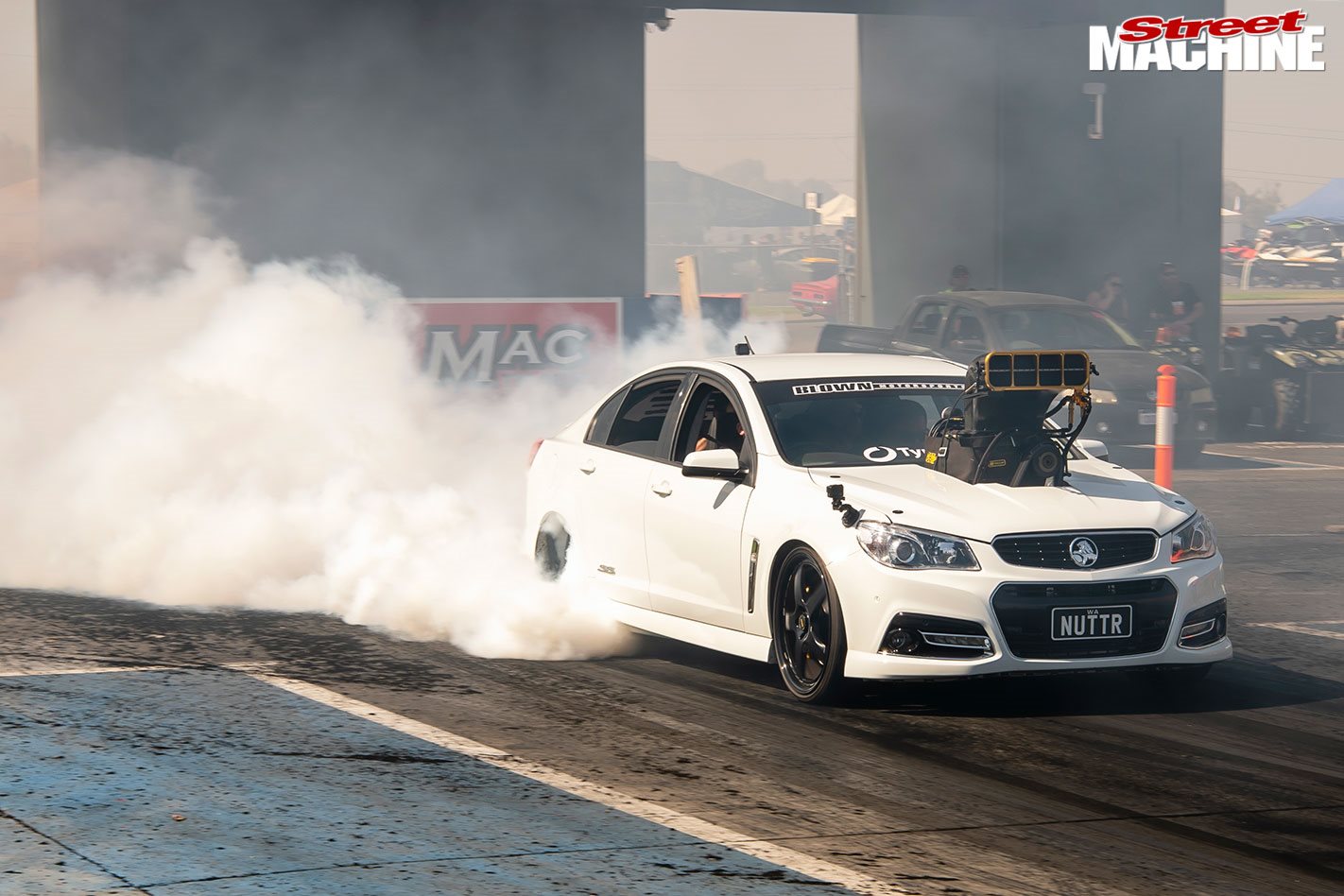 “The fuel system is critical, and a lot of people get it wrong,” George explains. “You need a front header tank that basically has an open breather, which is just not practical in a burnout car or cruiser. So the pick-up point on the tank, breather and return lines are critical, and it’s a balancing act getting breather size right.

“Fuel pumps like an Enderle are not a suction pump but a pressure pump, so fuel supply needs to be totally unrestricted. How can this happen if you potentially have your breather line full of fuel that is pushing through from fuel circulating from a rear tank and MagnaFuel pump?”

Like any car that is living in the edge, the VF is fitted with a full data recording system, in this case a V300SD Racepak logger. George will tell you he never stops learning, and sees problems simply as opportunities to learn more.

What does the future hold for George and Blown Motorsports? “At the moment I really miss drag racing,” George admits. “I’d like to build another drag car, but these days if you run a seven people think it’s no big deal. These turbo cars make it look easy, but I could see myself running another blown small-block. If it runs a bottom seven I’d be happy.”

We look forward to that day, and if the car is anything like NUTTR, it’s bound to be awesome.