SOME projects are a lay-down misère. A black, blown ’57 Chev, for example – for maximum impact and street cred, it’s a guaranteed winner. It’s a legendary combination on Aussie shores thanks to the film Running On Empty, as well as the antics of our own Mr Bray in Old Faithful. 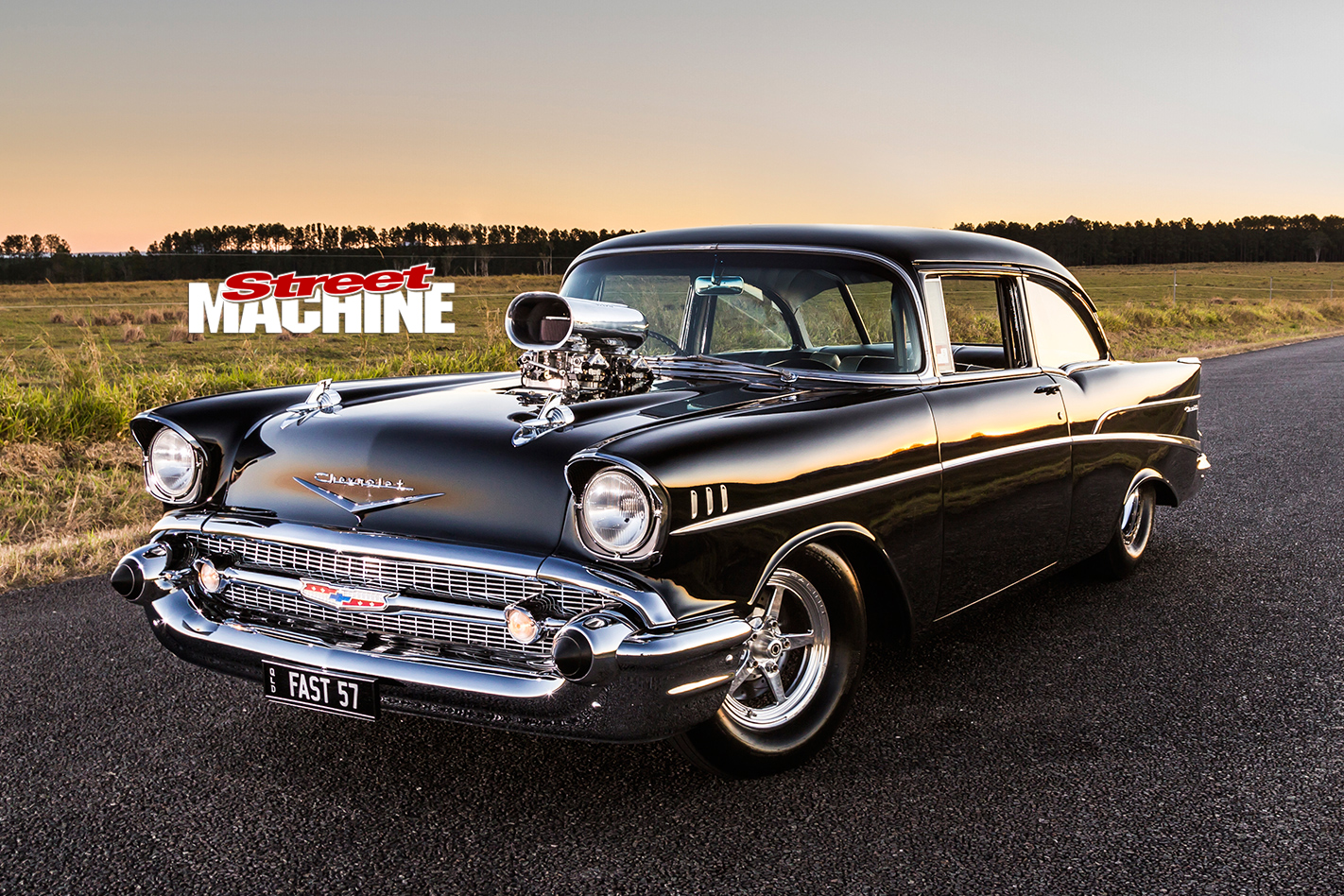 As you see here, John Mawhinney has not only added to this legacy of tough ’57s, but taken it further. You could call it fate.

“Cars are in my DNA,” John says. “My dad, John Norton, was a car nut and champion speedway driver. So was my grandfather, Digger. My early years were spent in a house that was smack-bang in the middle of a car yard and Dad would let me choose a hottie off the lot for a Friday night run.” 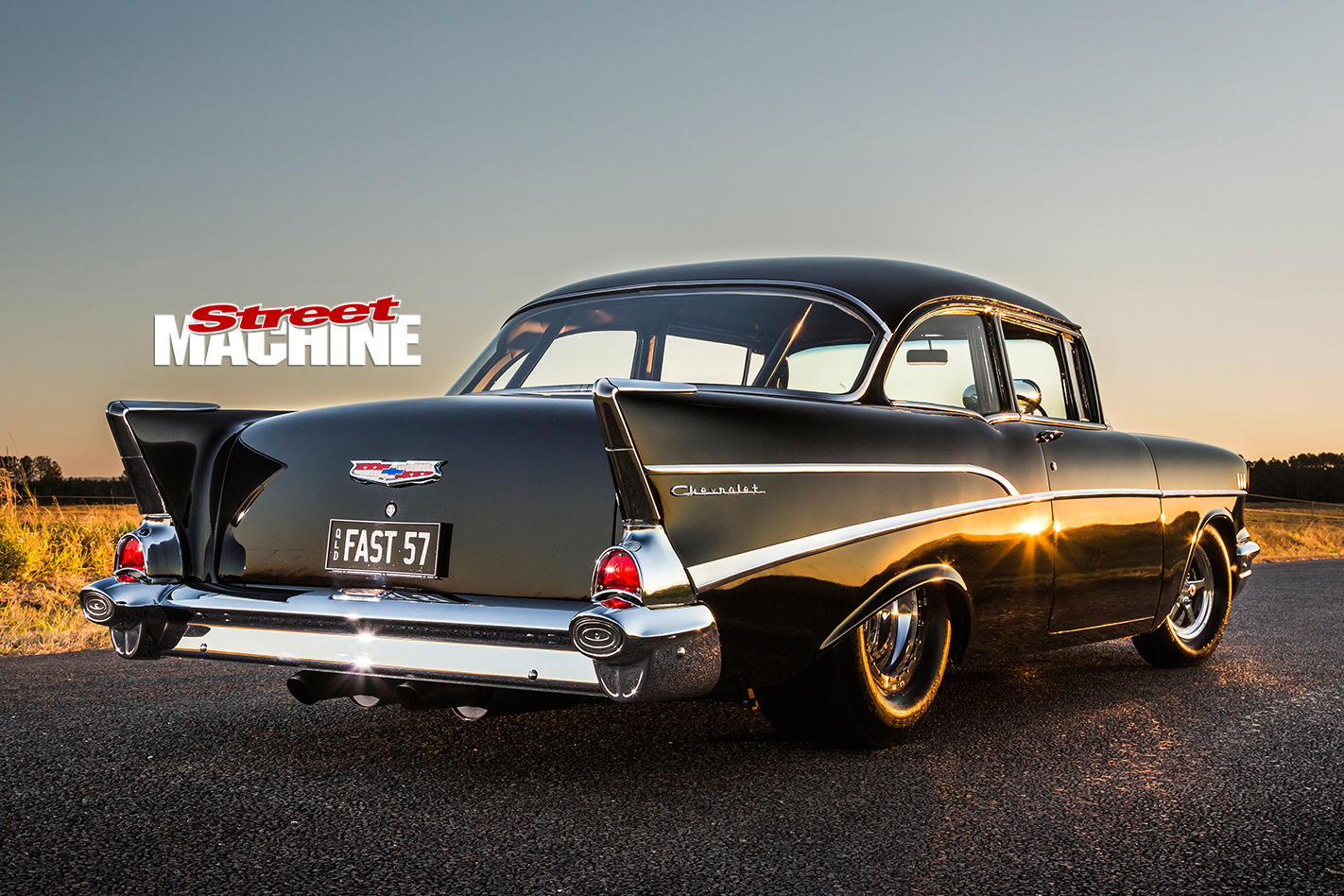 If John’s upbringing wasn’t enough, the ’88 Nats in Wagga sealed the deal. “I was 14 and the town was abuzz,” he remembers. “My mates and I had the time of our lives and I was instantly hooked on tough, black, blown cars. Gary Myers’s Mustang and the BDS Bronco blew me away. Gary Satara’s OVAKIL Falcon was that close to black I’ll pay it kudos too!” 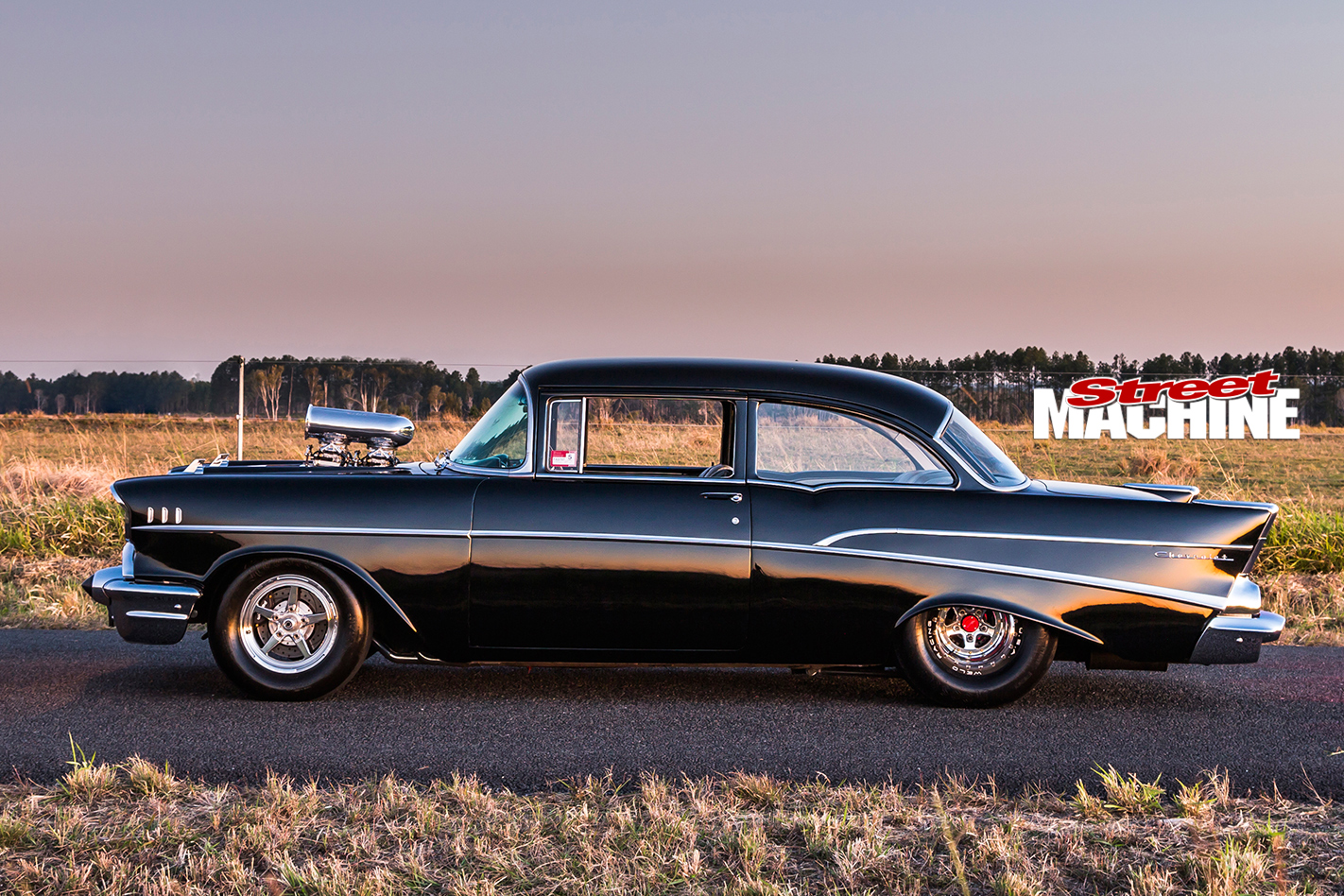 John’s dad was a mad-keen GT Falcon man, as well as a huge fan of Running On Empty, so he bought this ’57 as a shed-mate for his Track Red XY GT. “Dad wanted to have the set, and picked up this two-door running a nitrous 350,” John says. “It’s actually an Aussie-delivered 210 four-door that has had the tudor conversion, but how it came about is a mystery.” 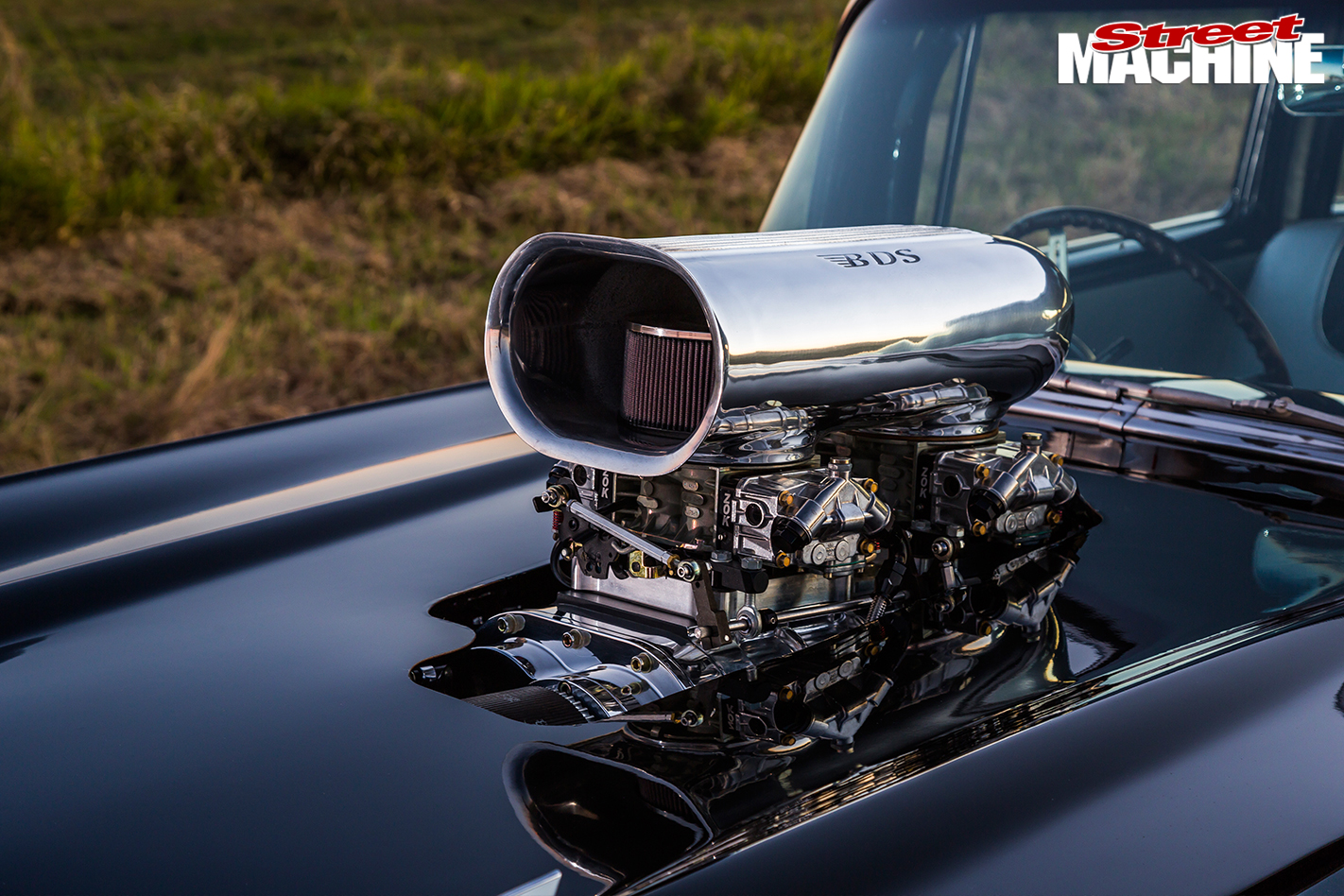 John’s dad pieced together a blown 383 and screwed a none-too-shabby 10.80 out of the car at an early Perth Nostalgia meet.

But John’s world turned upside down when his dad unexpectedly passed away at Christmas in 2008, aged 53. “I eventually brought the car home to Brisbane with no firm ideas of what to do next,” he says. “I sold my ’57 sports coupe project as a means to keep it; it was his dream car and I wasn’t about to let it sit around gathering dust.” 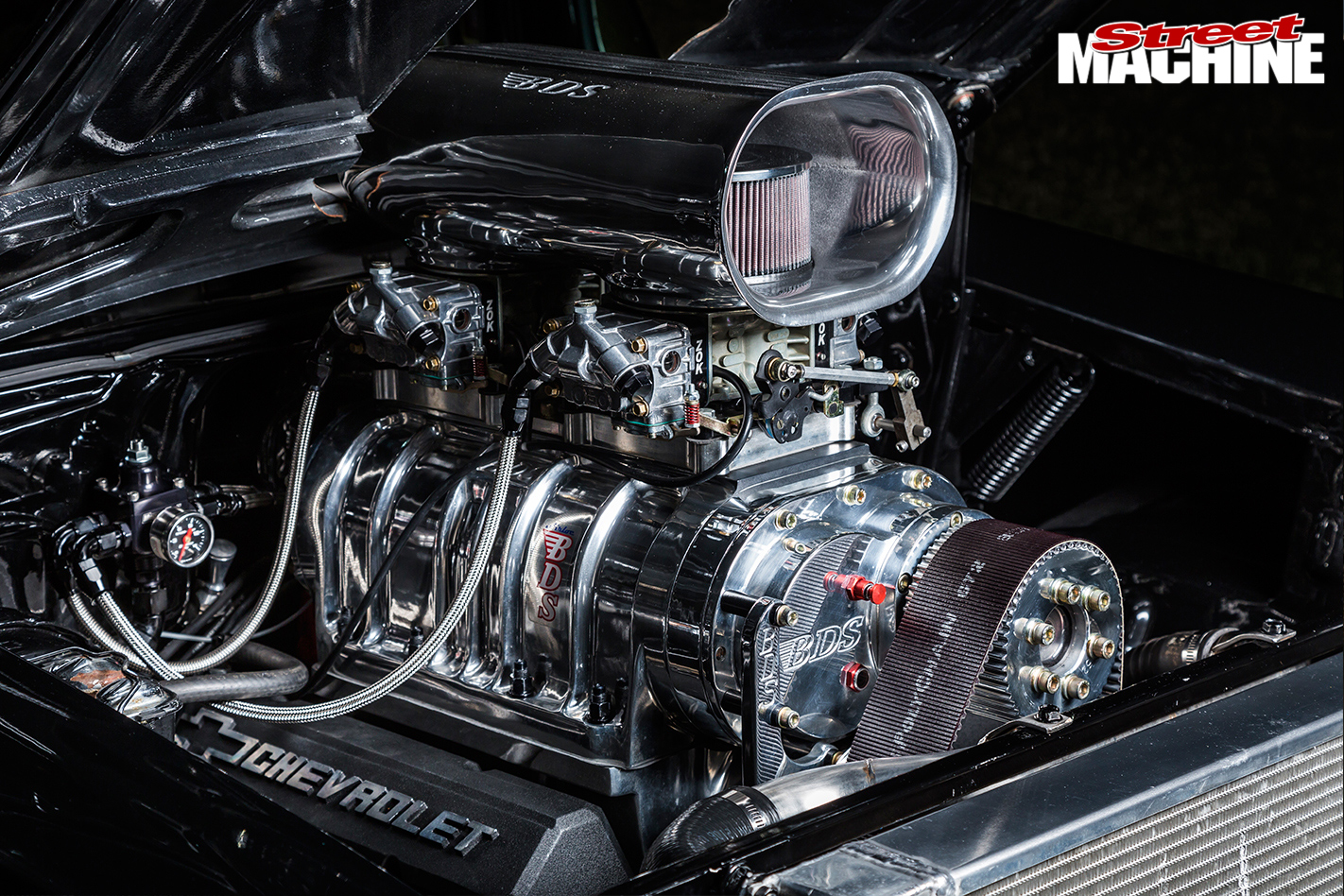 When the 383 lunched itself on the car’s maiden voyage, John had no choice but to start afresh. A chat with Woody at Fataz Competition Engines steered him towards a blown 400, which netted John a 10.50@129mph pass. “The officials quickly showed me the door due to the lack of a ’cage and the formal stuff, but the car was driven to and from the track and raced in full street trim, so I was happy.”

But soon enough a broken axle and resultant rear quarter damage, followed by a loading accident, sparked a full rebuild. 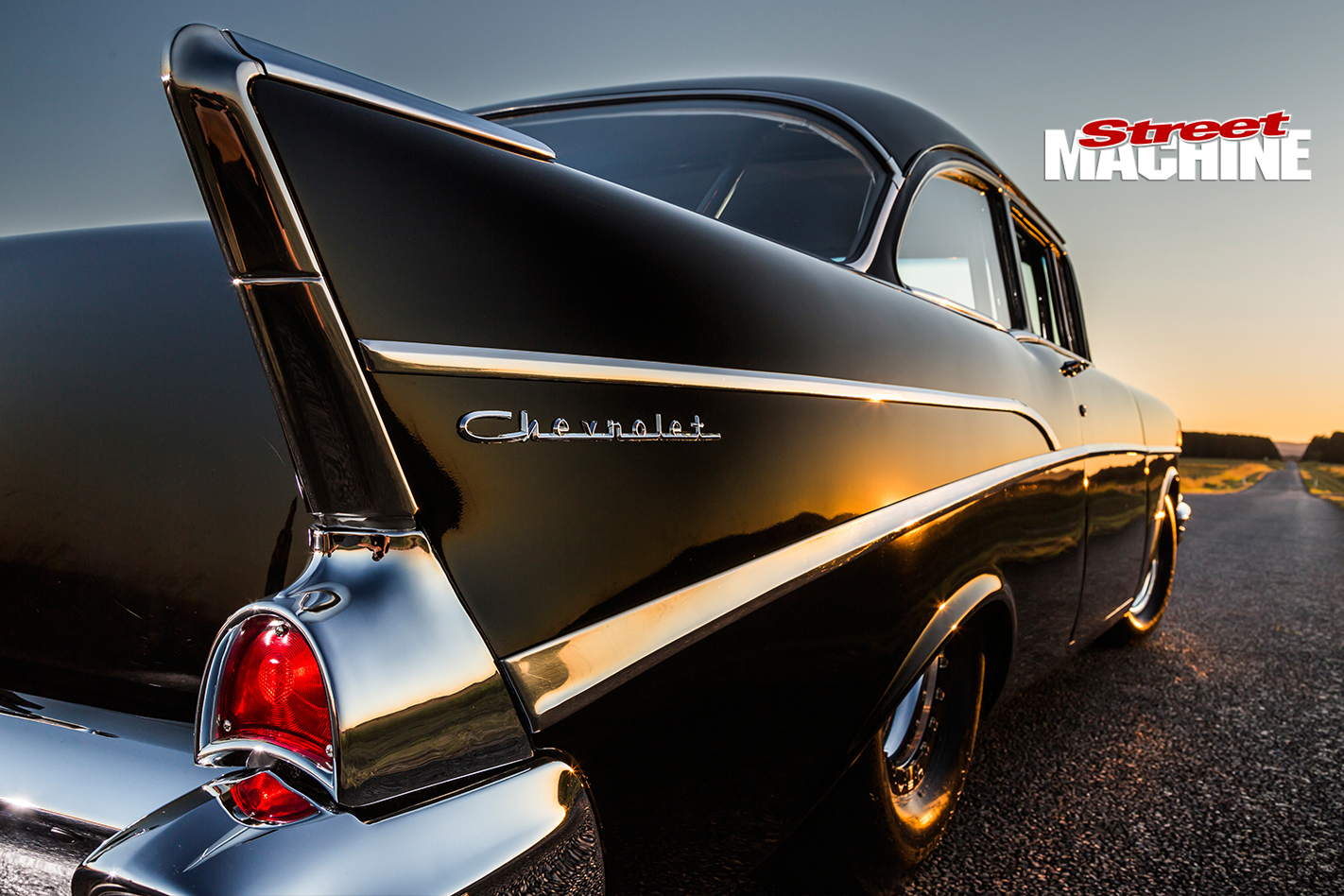 The car was stripped and the body given a birthday by Michael Stewart of MSR Kustoms before being bathed in Glasurit BMW Schwarz (German for black!). “It was a blessing in disguise,” John says of having to rebuild the car. “The original black always looked too ‘brown’ for my liking and you could basically see where the old back doors were, which shit me. Michael did an exceptional job with those quarters; I couldn’t be happier. 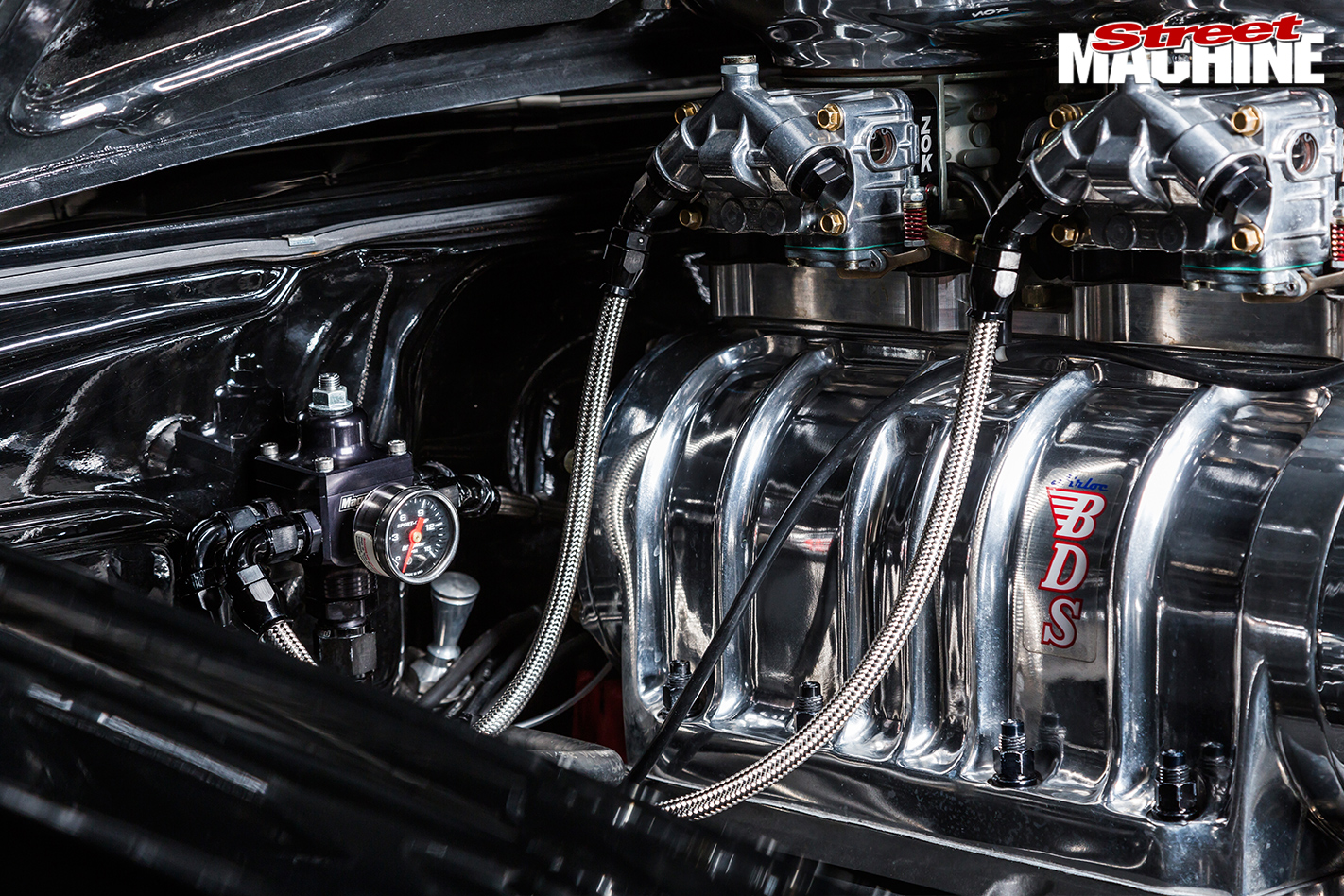 “Of course the old exterior chrome and fittings were never going to cut it, so I replaced everything with brand new stuff.”

The 400 was given a safe-side freshen-up by Fataz, who upped the ante with an 8/71 and bigger carbs, and converted the donk to swill E85. 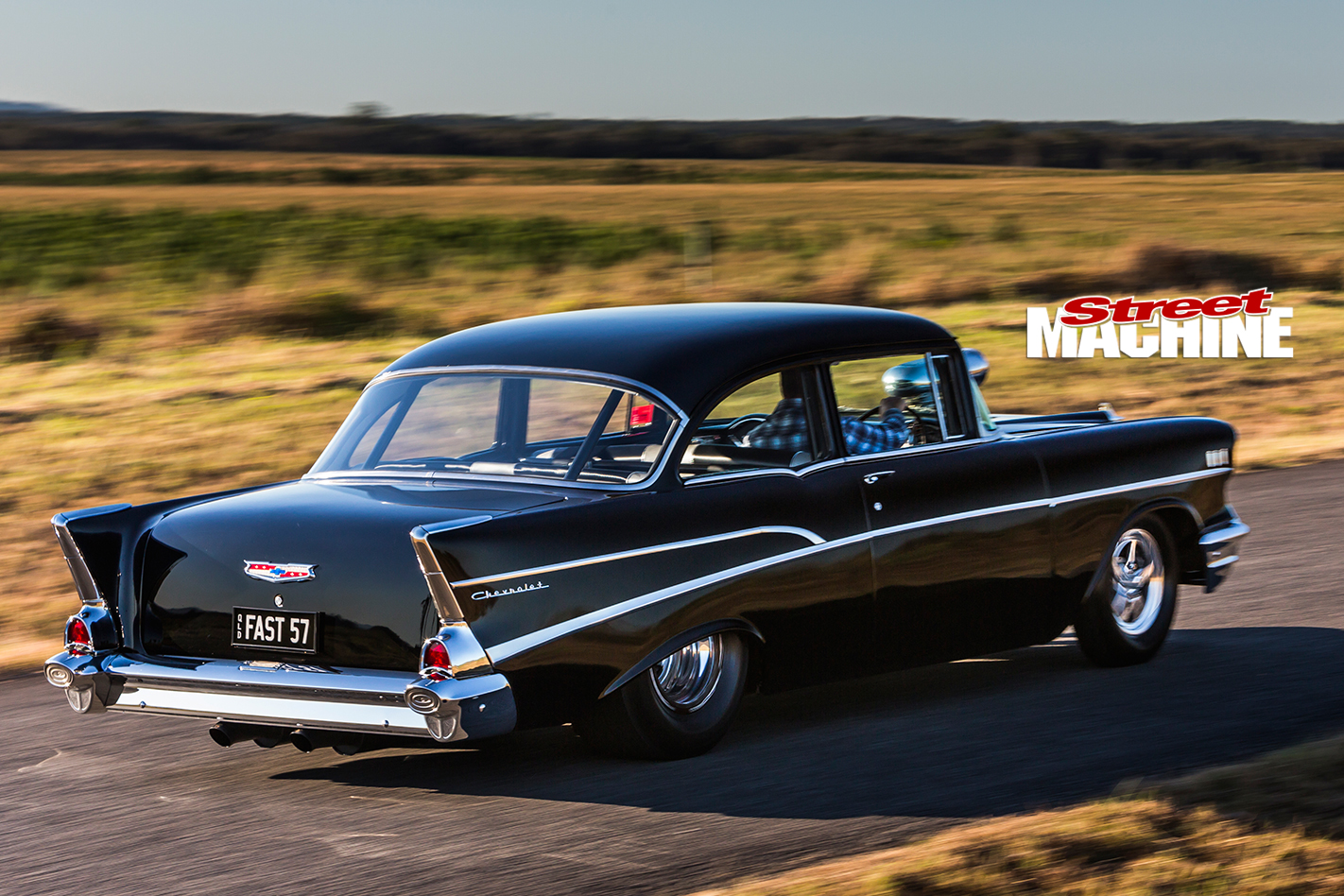 A mad rush saw the car finished in time for Cooly Rocks On 2013, and John quickly backed that up with a healthy 9.83@139mph pass, again in full four-mufflers street trim.

“A couple of weeks later I leaned it out on the Lakeside eighth-mile, which caused some engine damage,” John says. “The car sat idle for two years while I got the coin together to repair it.” 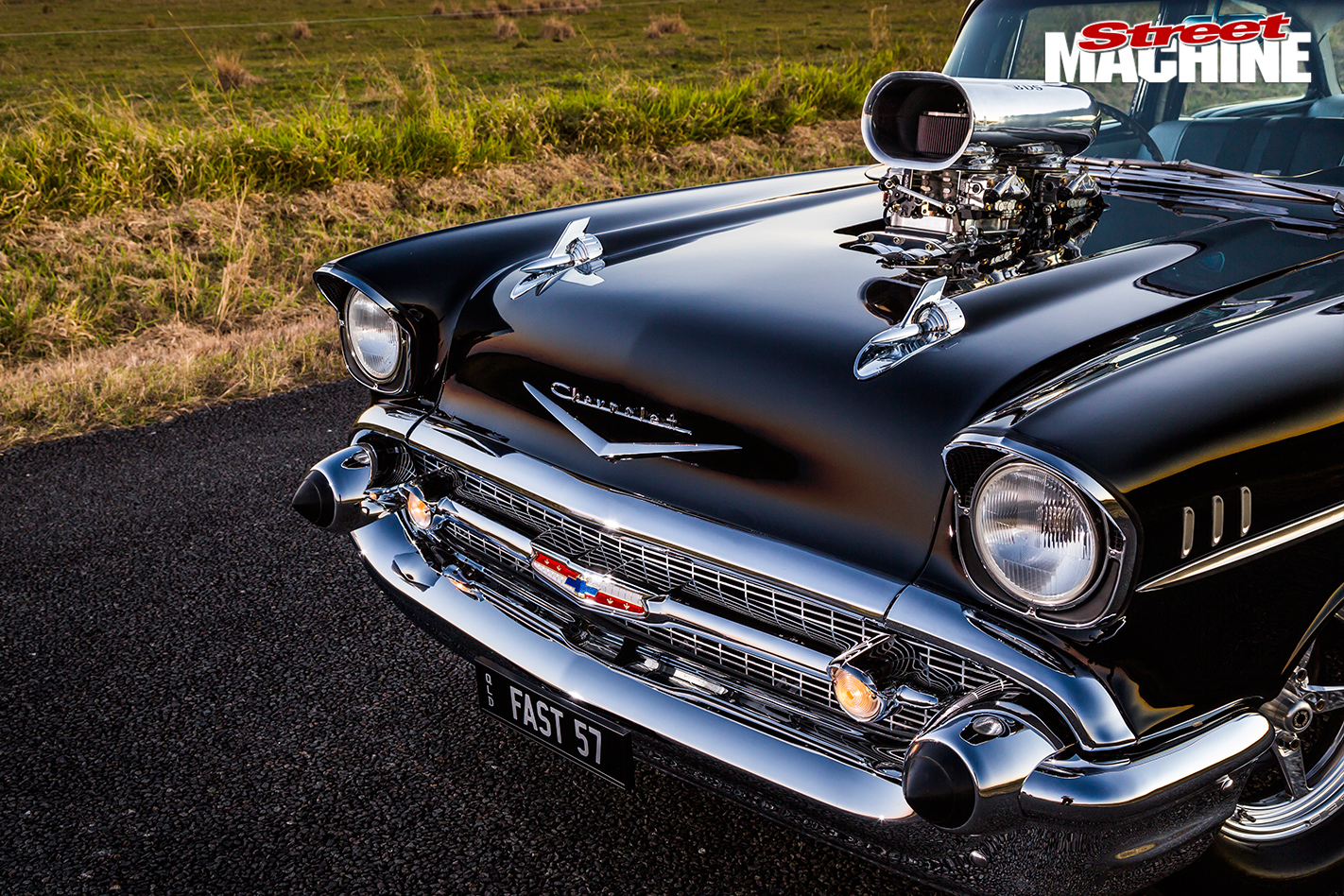 With a deadline set for this year’s Cooly, John chose to further tweak the engine combo. Ray from Straight Line Performance was given the nod to sort the 400, based around a Dart block that scored a Callies crank and rods topped with JE blower slugs. An E85-friendly, secret squirrel-grind Comp solid-roller and Crower lifters work with Trend pushrods and Isky springs, bumping Ferrea stainless valves via Jesel rockers. Heads are John’s dad’s original AFR alloys running a Blower Shop high-rise intake and BDS 8/71 Air-Loc supercharger. 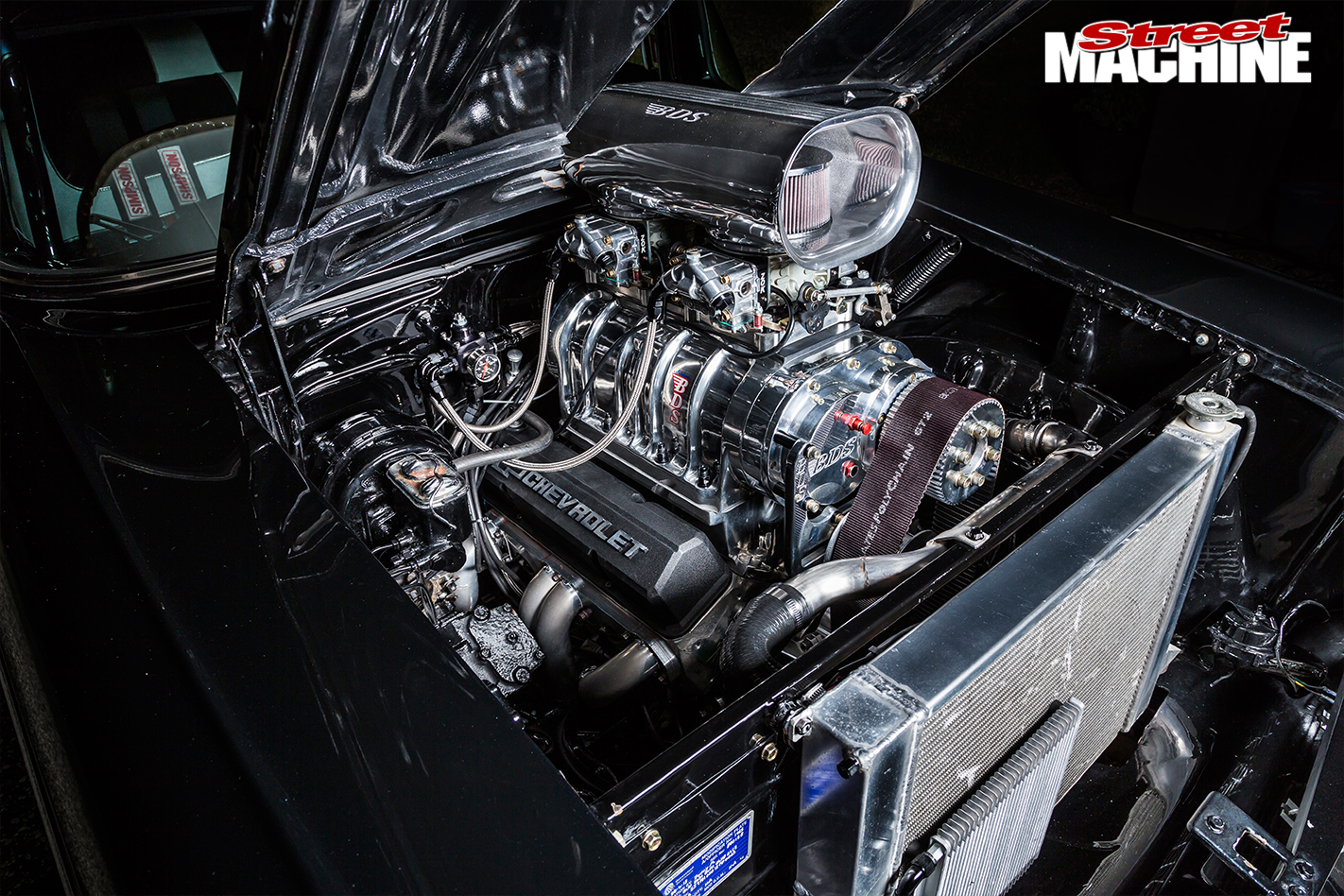 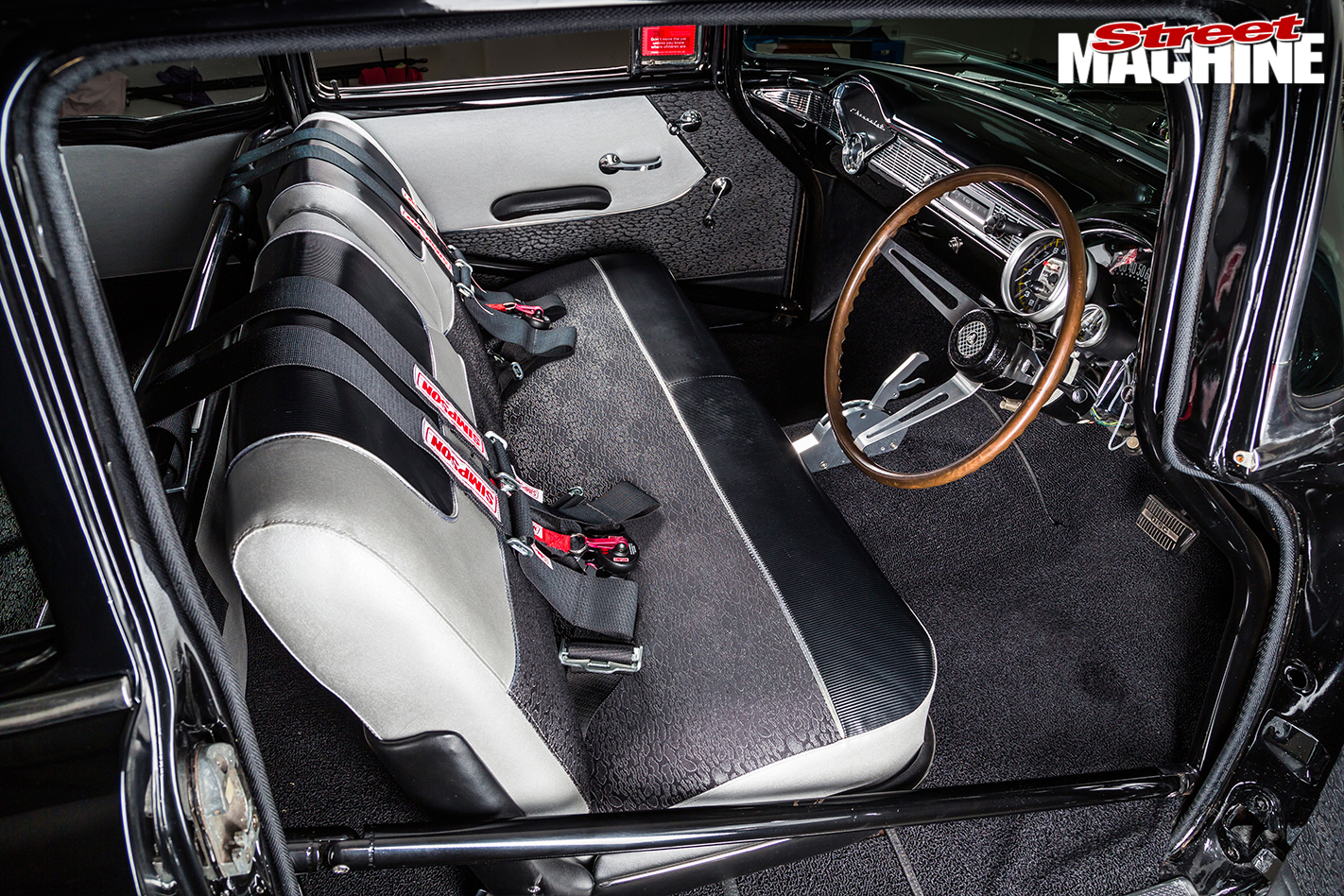 A race-prepped Turbo 400 trans features the obligatory full-manual valvebody and Neal Chance 3000 converter, and runs to a Race Products full-floating, 35-spline nine-inch conversion, which got the nod after the axle-snapping episode. A fabricated housing hosts a bevy of Strange gear, and 4.11 gears were selected for the Detroit Locker centre. 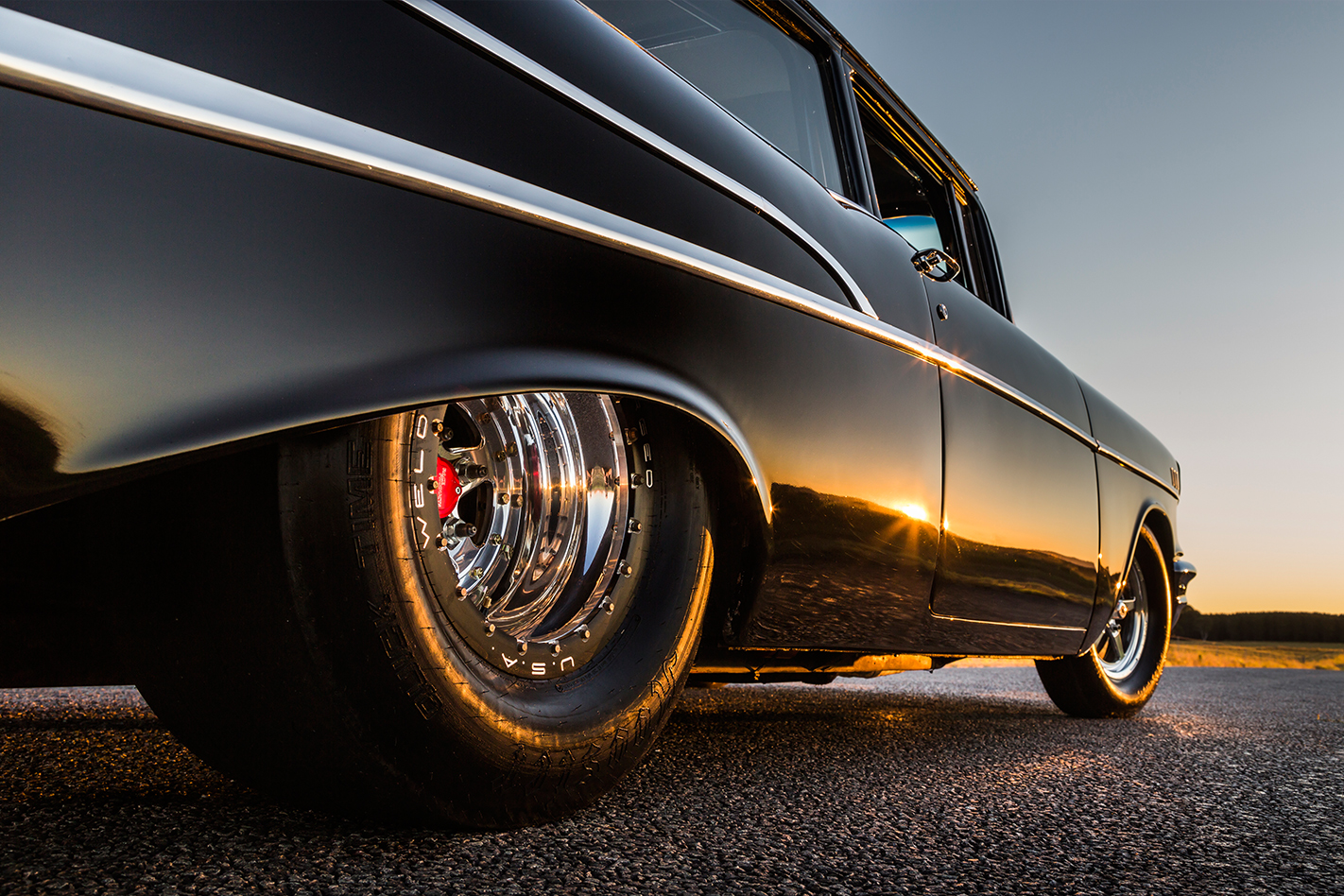 Wilwood discs all ’round were a necessary brake upgrade, while Pedders springs and shocks were employed front and rear. CalTracs were added to the relocated rear springs, tucked inboard of the chassis rails to make maximum use of the tubbed back end.

Weld AlumaStars are the latest rims to adorn the classic coupe, measuring 15x4 and 15x10 and wrapped in Hoosier rubber. 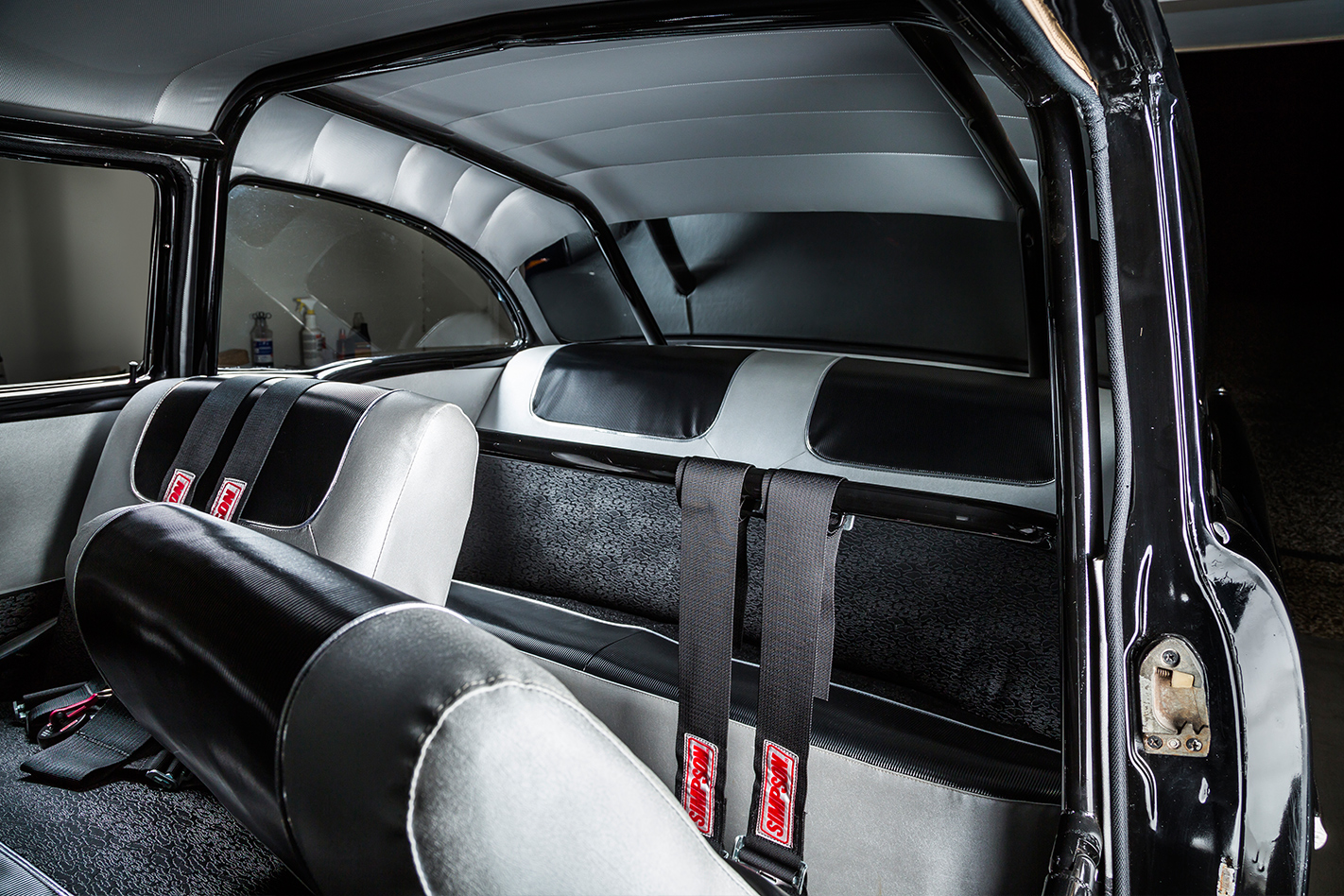 The interior remains true to its 210 roots, freshly re-covered in black and silver material by Ciadella Interiors, albeit with a split front bench for rear seat access. And yes, it now runs a full chrome-moly rollcage for race duties. 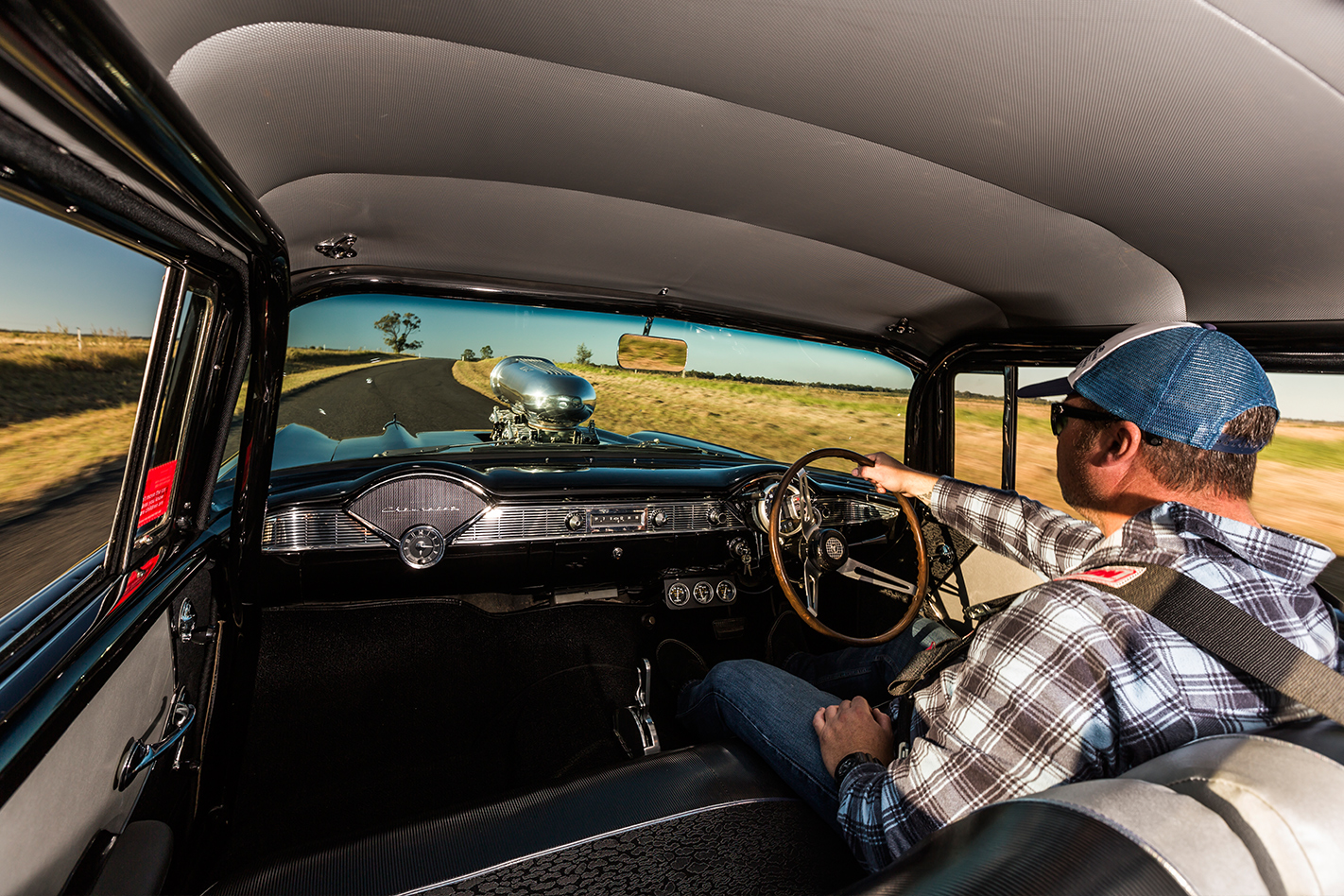 Next stop: Summernats 29. “The car will stay as-is for Summernats,” John says, “but I have a ProCharged EFI Steve Morris 400 on the cards. It will be a shame to have it all under the bonnet though, so I am feeling pretty torn. Either way I hope my dad is watching over me; it’s the last thing I have of his so it is important to keep it evolving and keep the old man happy.” 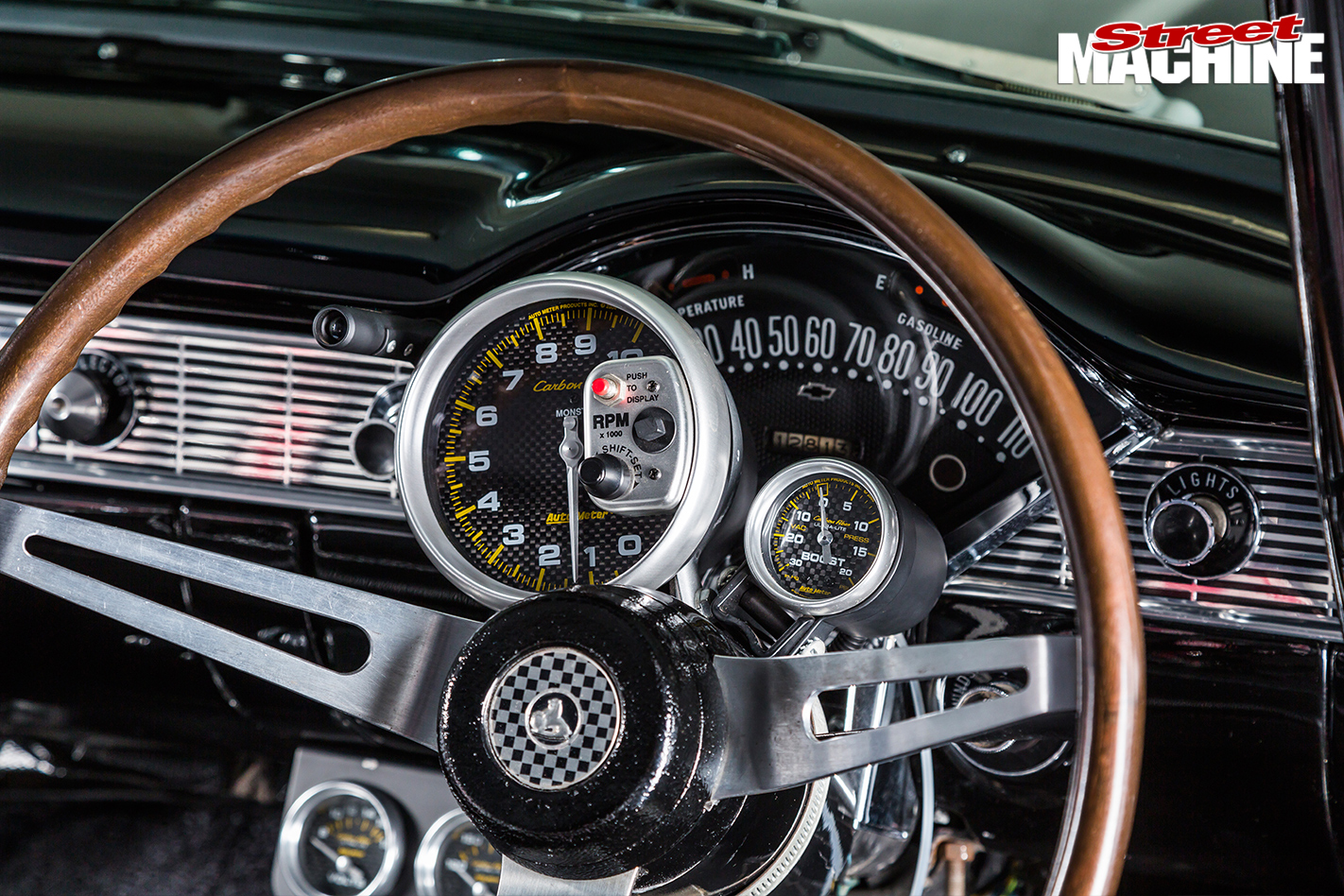 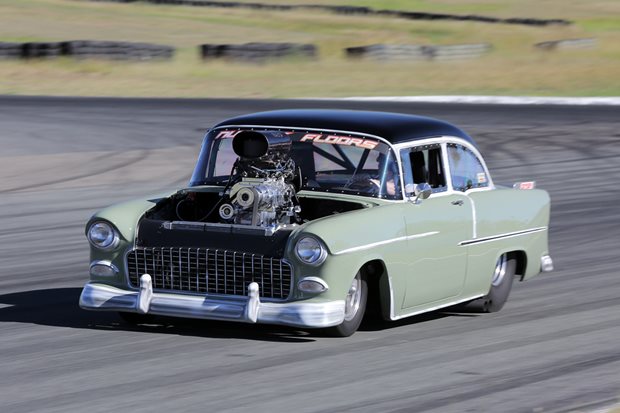 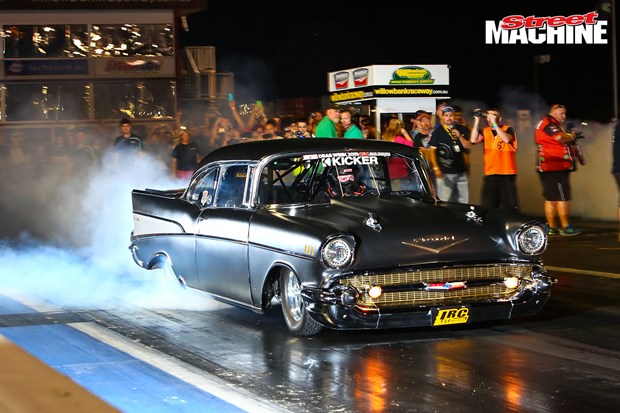 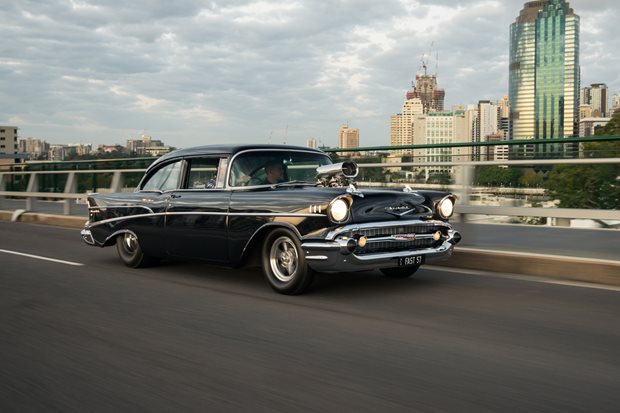