PERHAPS it was Peter Brock’s passing in 2006 that sparked a renewed interest in the HDT brand and its iconic back catalogue of high-performance Commodores. You could also put it down to the fact that they have ‘come of age’ and are now old enough to be considered classics. In any case, values of genuine early-girl HDTs have been heading steadily north of late. 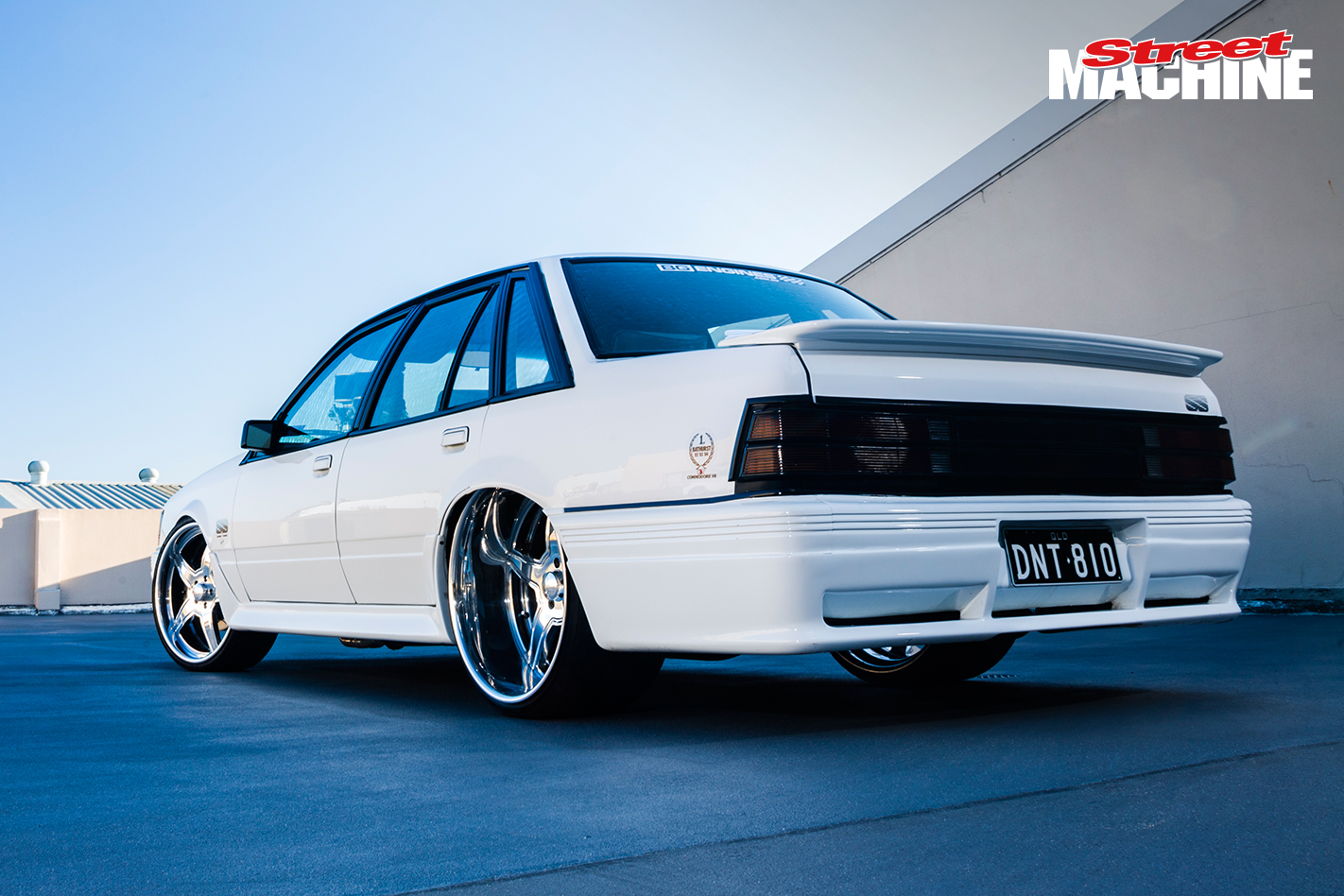 As we know from experience with other classic muscle cars such as GT Falcons, when genuine cars appreciate in value to the point that they are no longer accessible to the masses, you start to see tribute cars being built out of ‘lesser’ models. As a result, HDT replicas are by no means thin on the ground these days, but Ahmed Addoug’s VK is a tribute with a totally insane twist.

“I wanted to build a 1000hp street-driven car,” Ahmed says. He has achieved that objective with the VK’s E85-chugging, 8/71-blown 403-cube LS, churning out a four-figure sum on the engine dyno. But it hasn’t been an easy road. 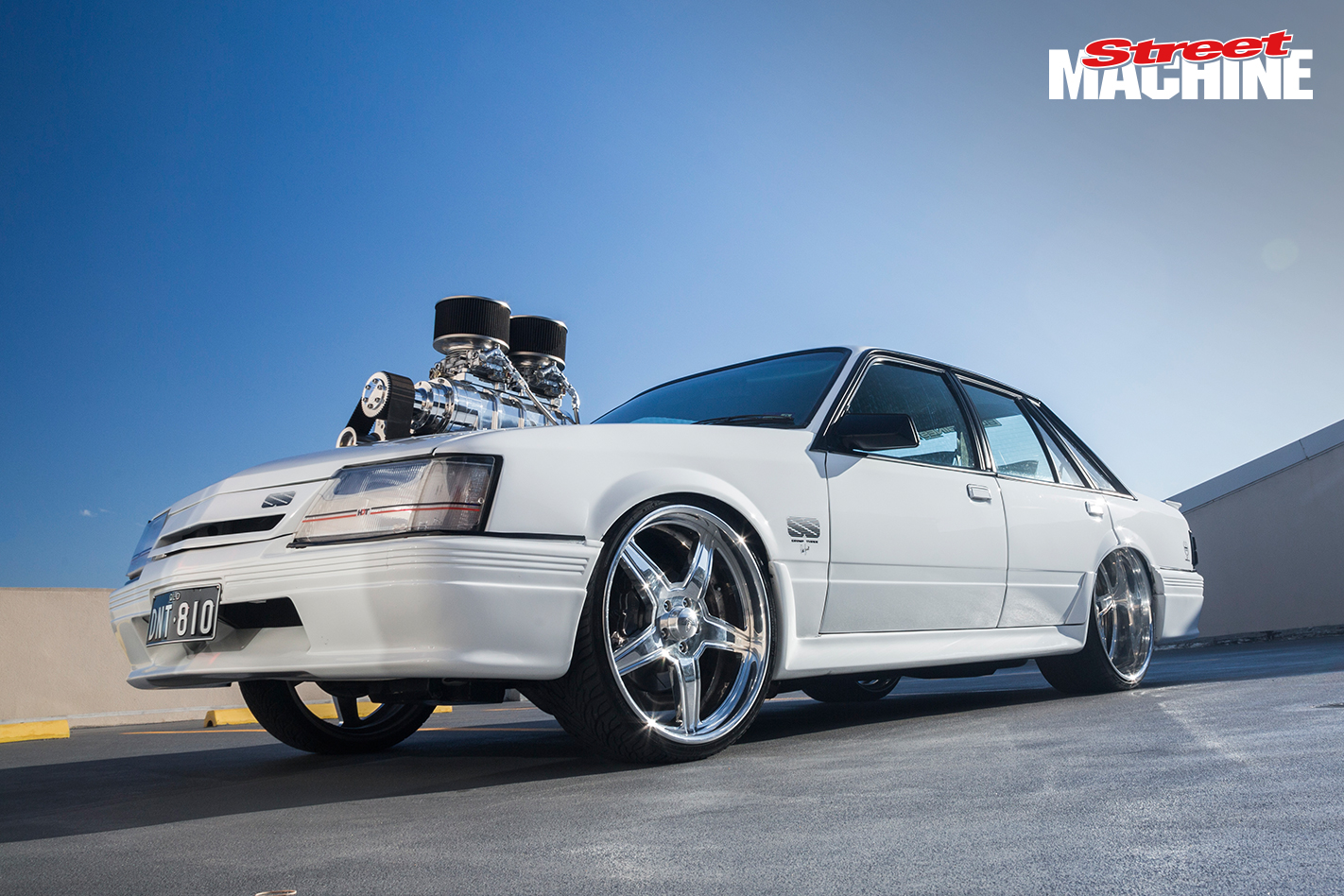 The car was a factory 308/four-speed when Ahmed purchased it, but it needed some love. He started madly stockpiling parts and sent the car off to the panel beater. “Unfortunately they stuffed me around and took two years to get it finished,” Ahmed says. “It was painted candy pink with tan trim and I got it running with a 6/71-blown 355ci Holden, but by the time it was finished I realised I didn’t like the colour!” 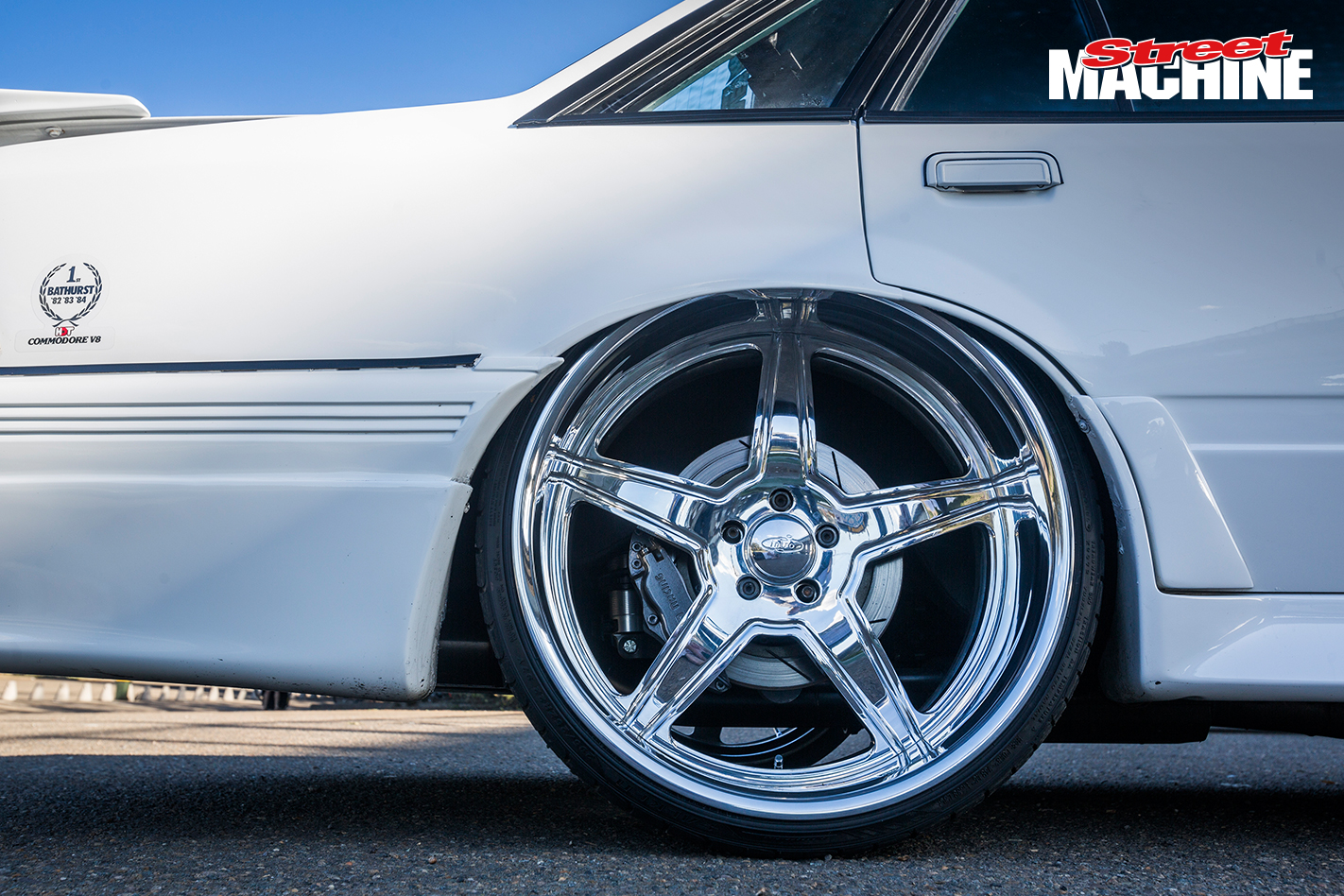 Ahmed stripped the freshly built car and painted it candy green, then halfway through the build shipped it off to 2SUS Custom Resprays for them to finish off. Unfortunately, the boys at 2SUS weren’t fans of the new colour, either. “They said the car wouldn’t be leaving their shop painted candy green, so I told them to do whatever they wanted,” Ahmed says. “I turned up a couple of weeks later and they’d painted it white!”

The look is based pretty heavily on the HDT Group Three, but with some tweaks to the body. “Once the 2SUS boys decided to paint it white, I thought let’s go with the original Brock look, but with personalised bits and pieces that I wanted. The door and boot locks, aerial and fuel filler are all shaved.” 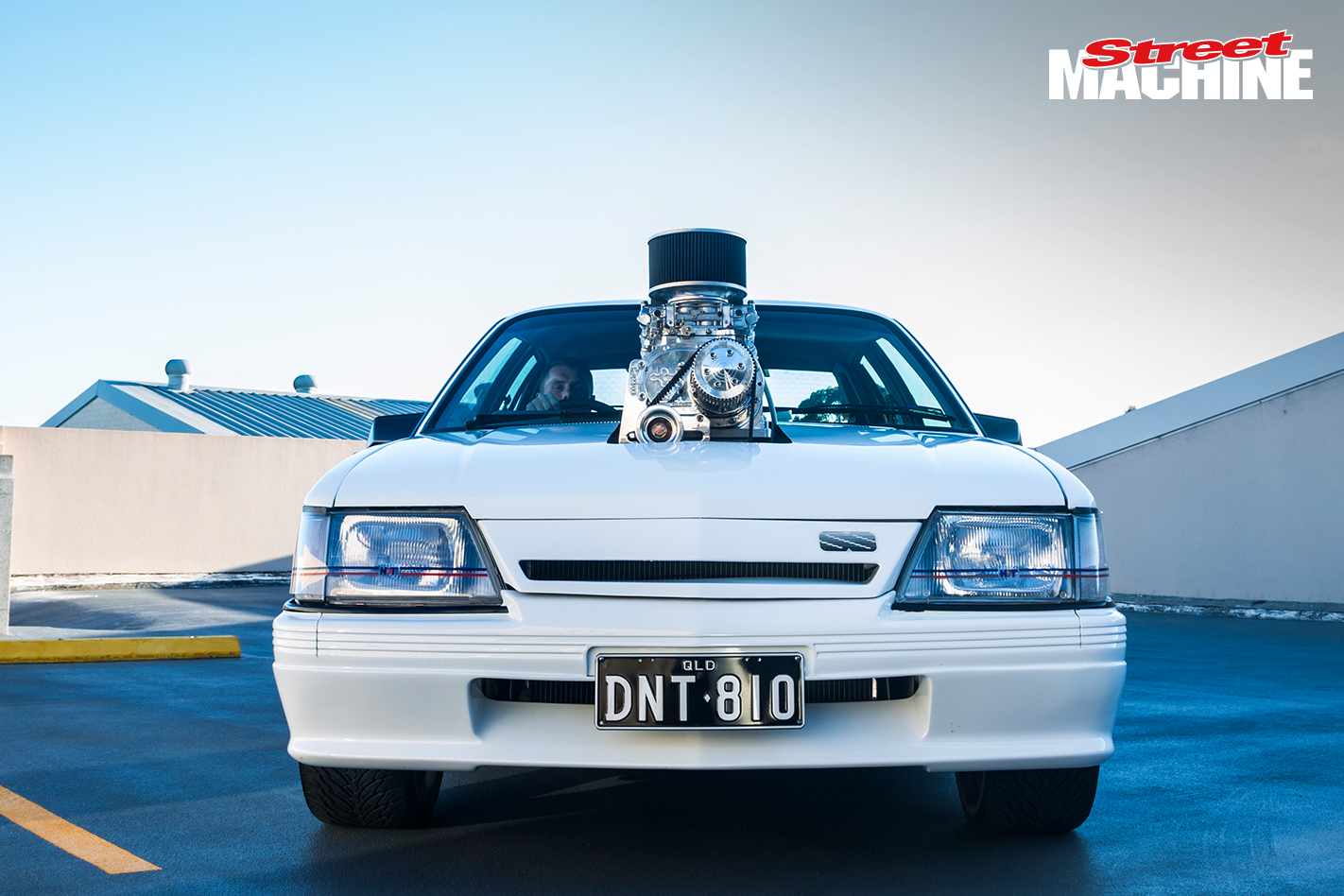 Around that time he met a bloke by the name of Adam Hodge, who convinced him that LS power was the path to righteousness. After first considering a 6.0L with rods and pistons, the pair decided to go all-in and build a cast-iron stroker with an 8/71 blower instead. 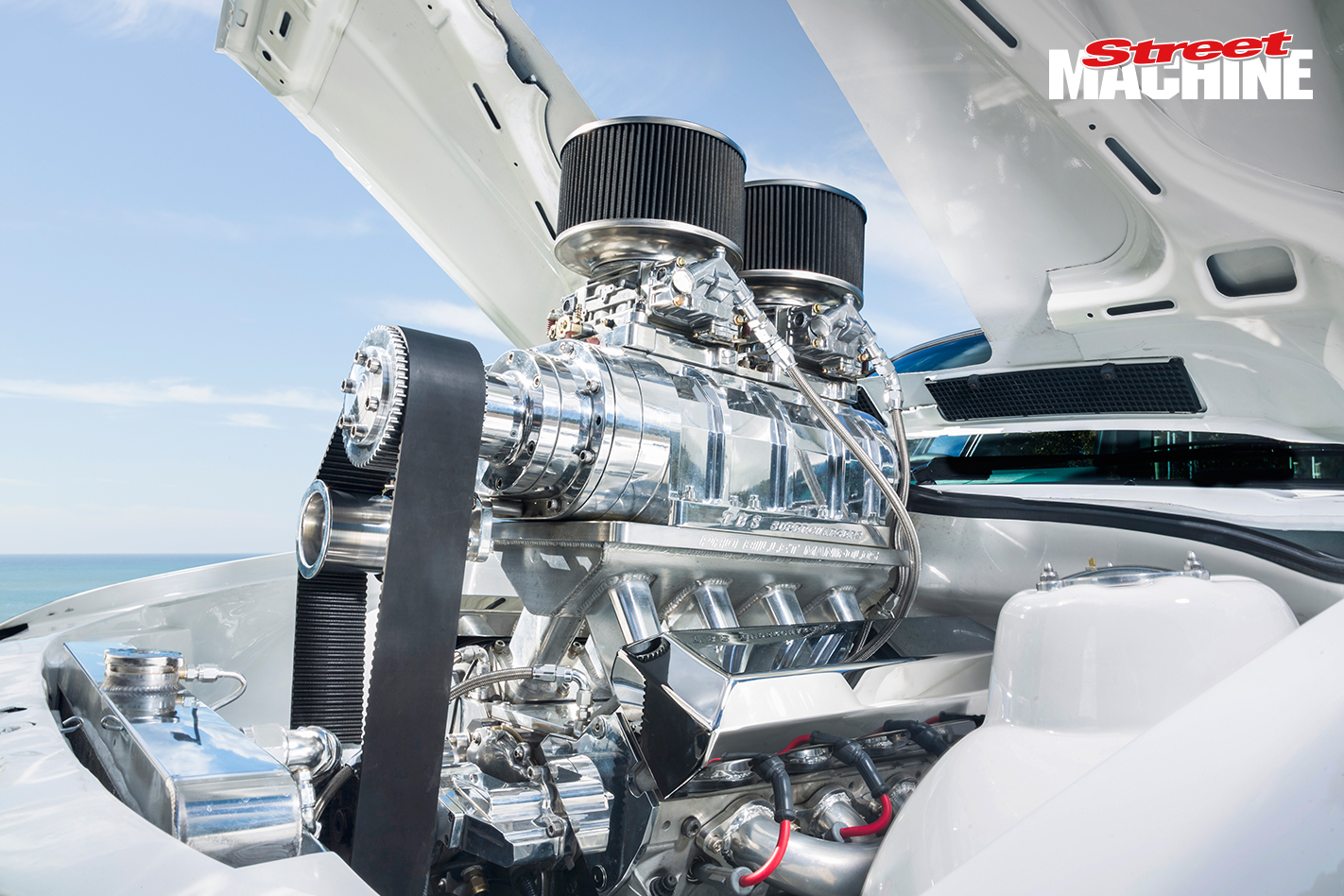 A Callies DragonSlayer crank was used, along with Callies Ultra rods and SRP pistons. Heads are ported L98 jobbies, while the camshaft is a Comp Cams roller, ground specifically for the application. The Blower Shop 8/71 pump is sandwiched between a pair of QFT 750cfm carbs and a Pro Billet blower manifold, and doesn’t it all look very shiny? Even with all that horsepower on offer, it’s every bit as functional as it is easy on the eye. 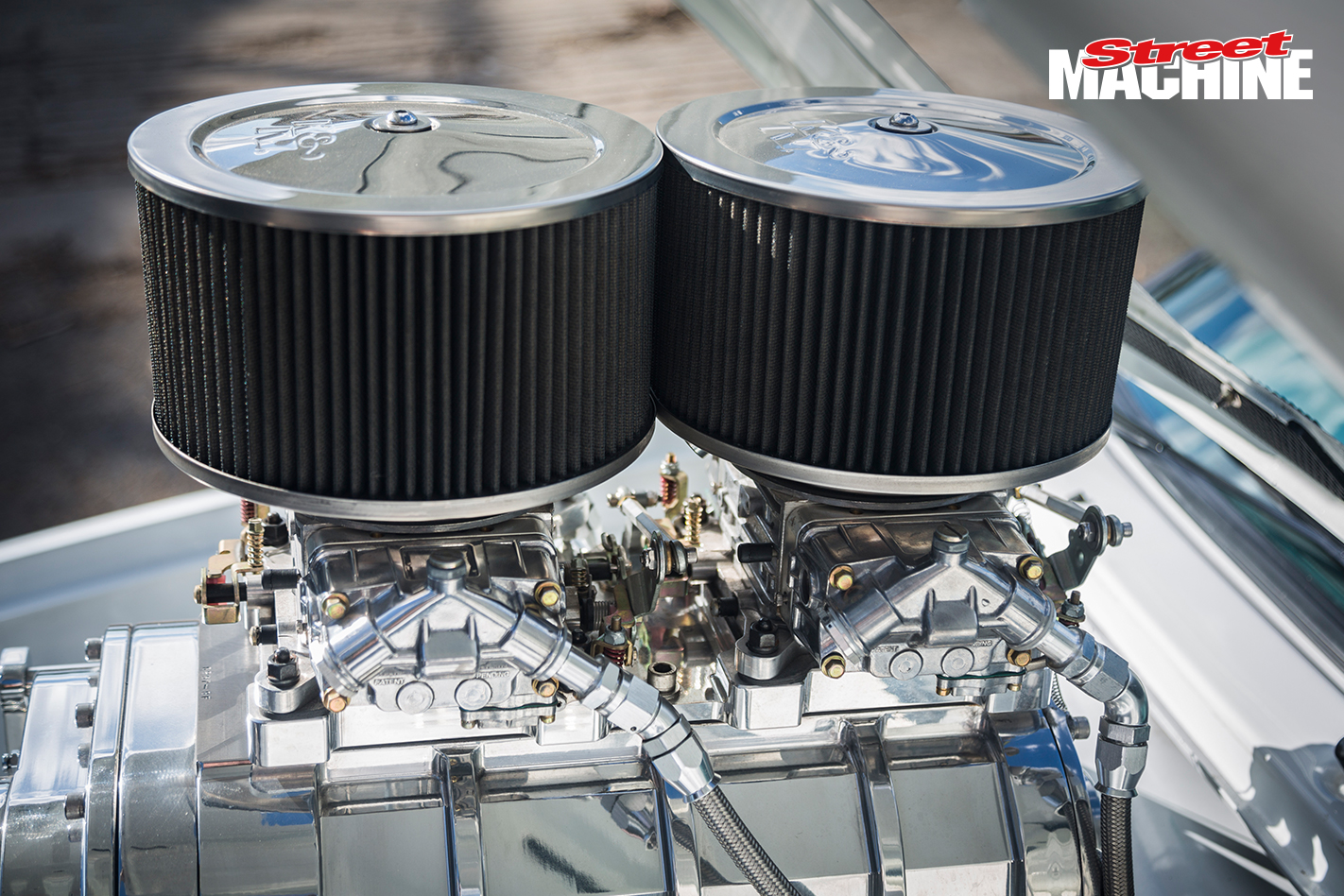 With the engine out, the opportunity for an engine bay overhaul was too good to pass up. “When we decided to do the bay it started out as a minor tidy-up, but it got a little out of hand,” Ahmed admits. “In the end I decided I didn’t want one single hole or bolt showing.” Elite Fabrications tackled all the fab work in the engine bay, fitting a flat firewall, boxing the chassis rails and headlights, smoothing out the radiator support, and welding on the guards to get rid of the unsightly bolts. Even the inner guards were cut from the car, remanufactured and welded back in. 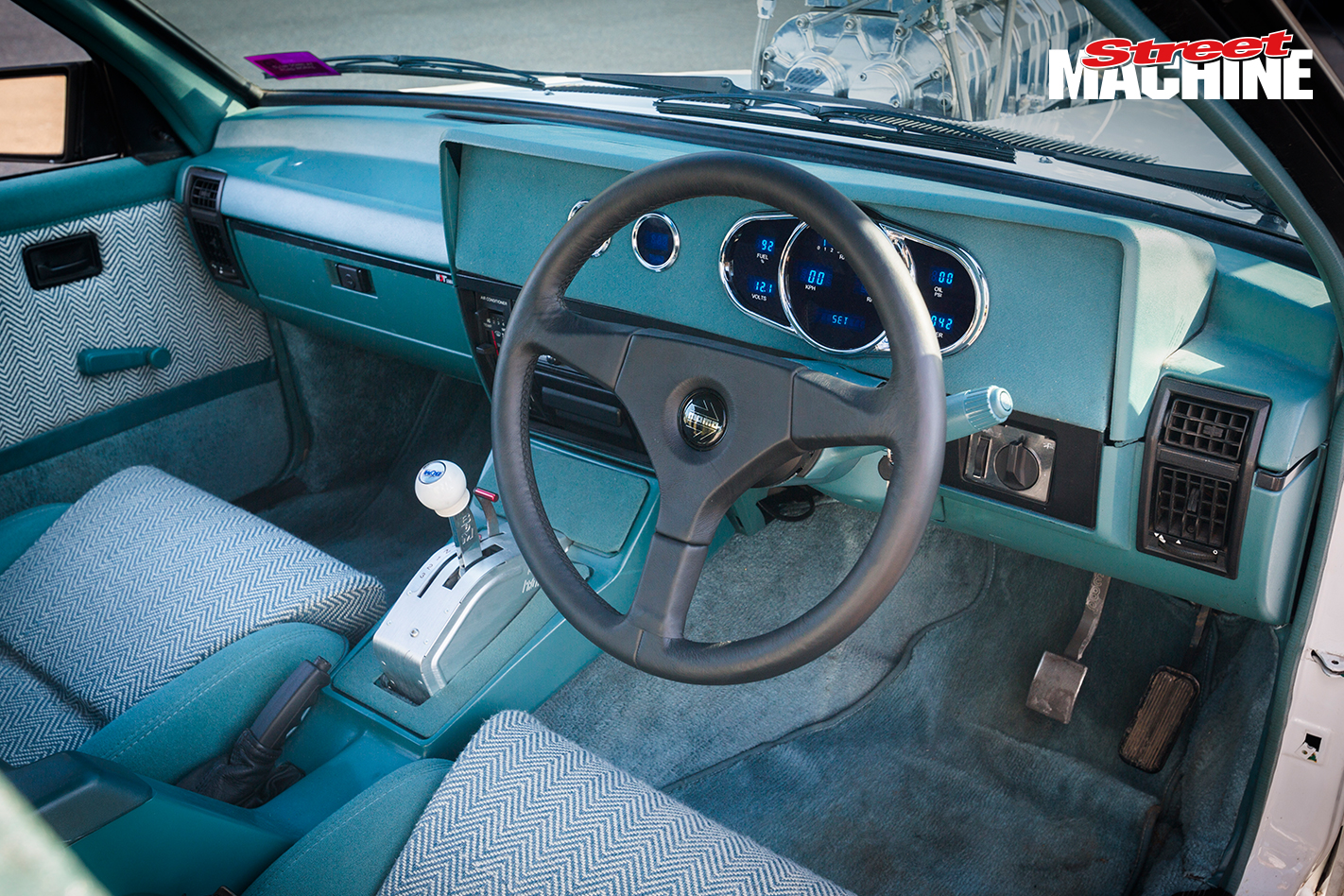 At the same time, Ahmed figured that the trim was the wrong colour, and went completely back to the drawing board. Again there’s a very distinct HDT flavour, but it’s been heavily modernised. HDT Scheel buckets were used up front, but an additional pair was modified and installed in place of the rear bench. The factory dashboard was reconditioned – even the standard issue Eurovox head unit remains – but a Dakota Digital cluster now relays engine vitals to Ahmed in a far more concise, accurate, and aesthetically pleasing fashion than the 1980s analogue unit could ever do. 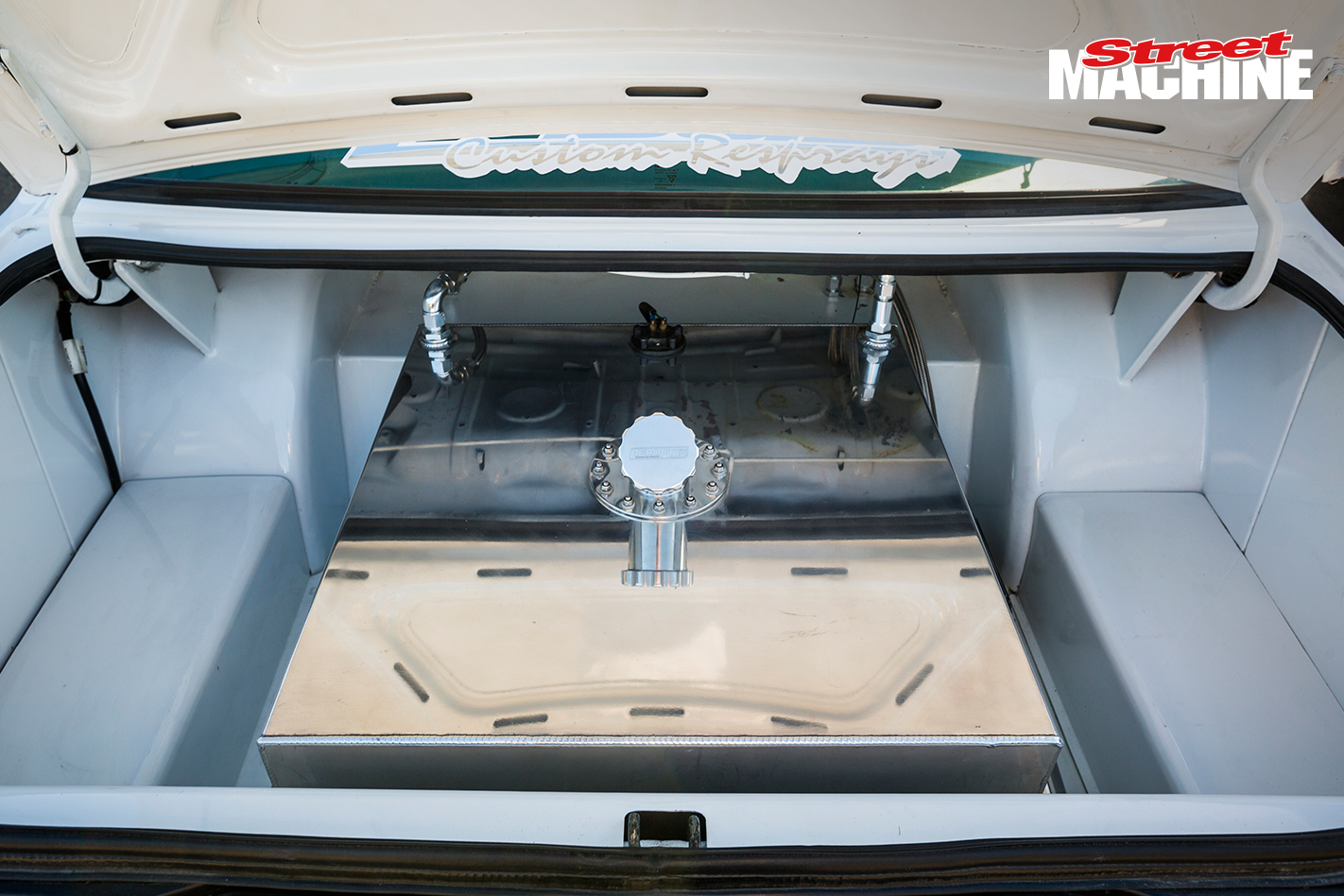 By the time Powercruise 54 rolled around, Ahmed was hoping the switch to LS power would help the car go the distance, and it was a case of third time lucky. “It lasted the whole three days this time, and I had plenty of fun in it,” he says. 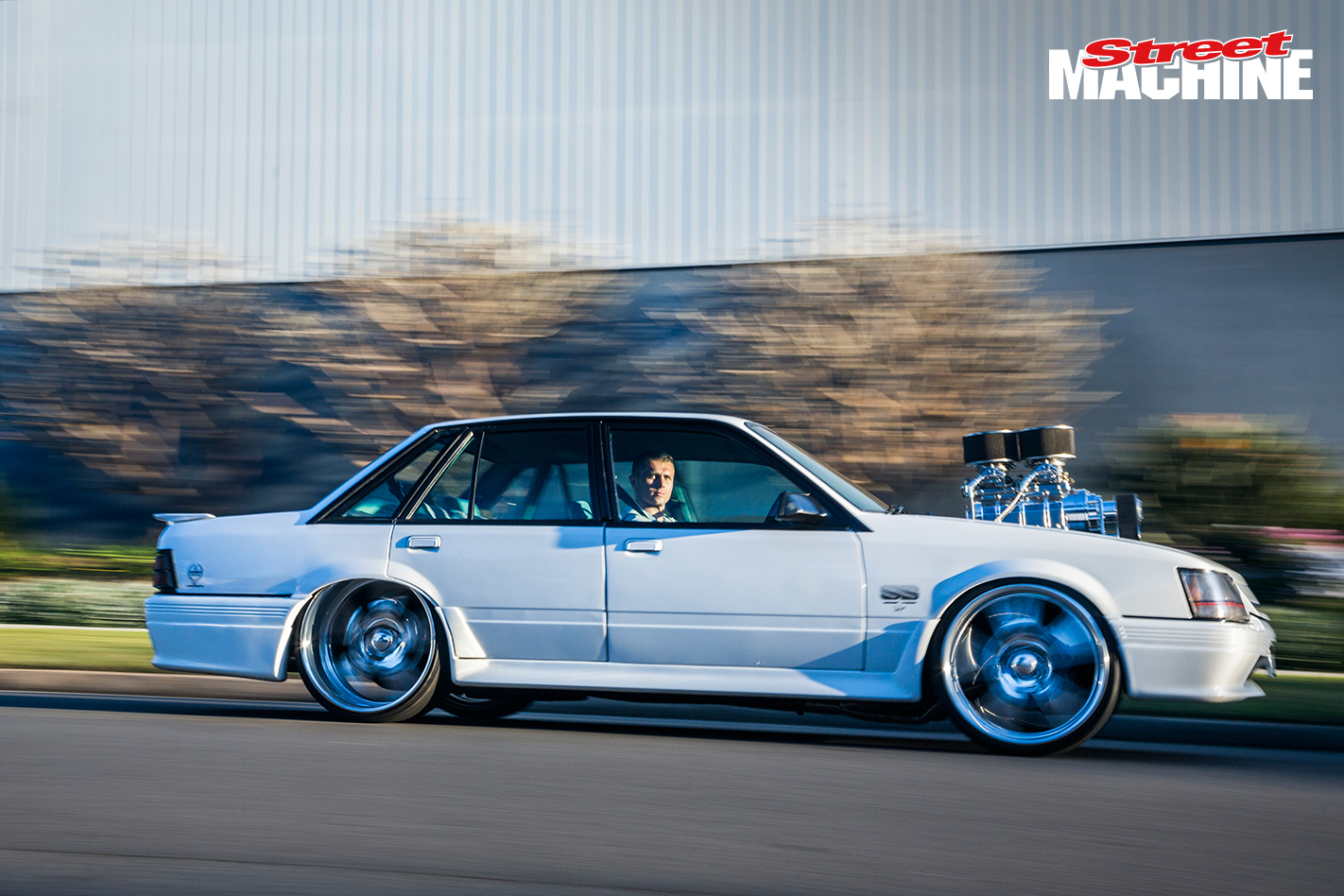 But the fun didn’t end there. Conscious of the fact that the diff was in need of a birthday, Ahmed reasoned there was simply no sense in building a new diff without tubbing the car. It was hauled back to Elite Fabrications, who tubbed it to accommodate  the 22x12in Intro Rockman wheels, and put the new four-link rear end together. “I was hanging out at the workshop one night while they were tubbing the car, and we decided to cut the whole boot floor out and make a custom sheet-metal one,” Ahmed says. “It looks a bit tidier; it’s different and works well with all the other mods.” 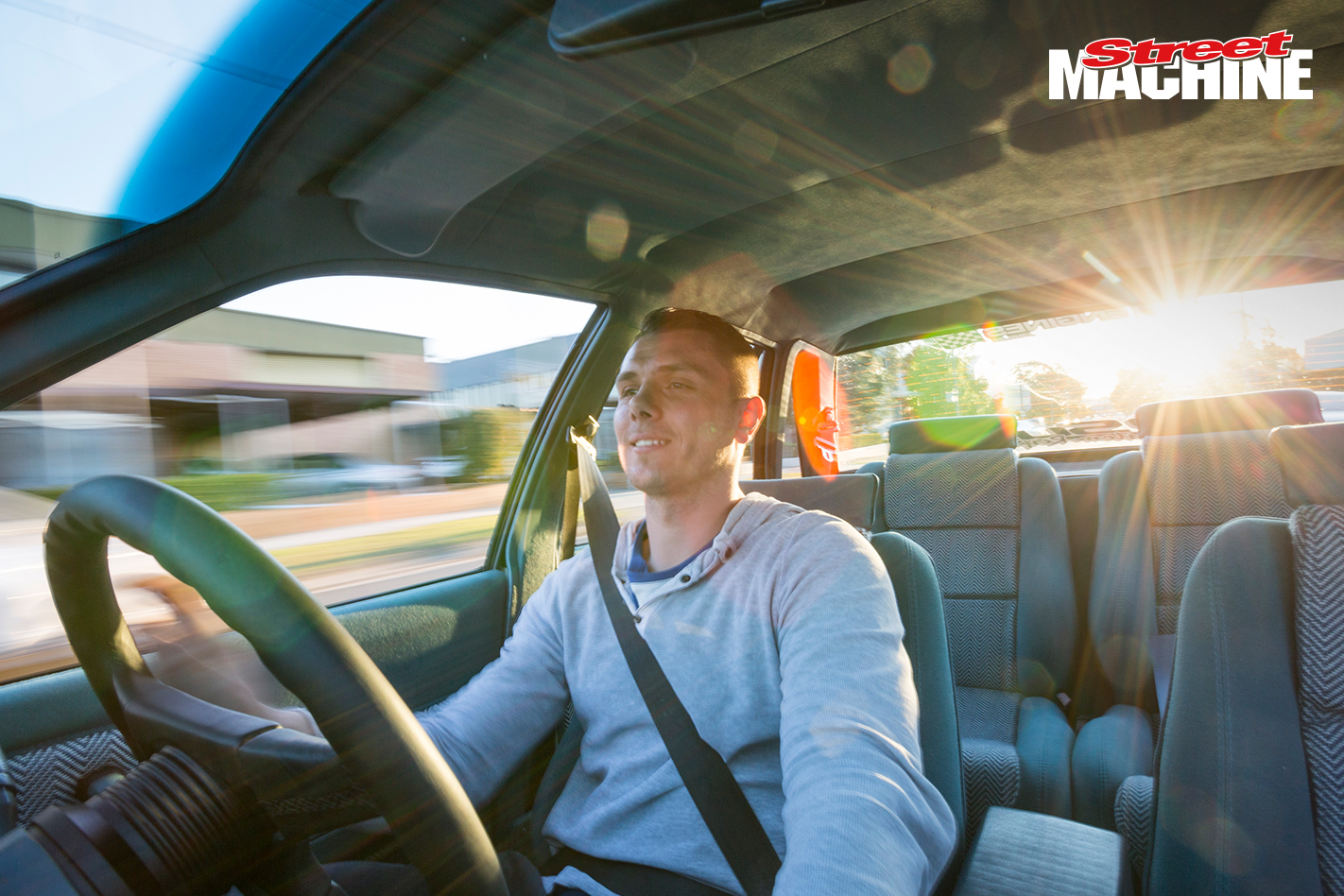 By now you’re probably questioning whether or not this blown and tubbed monster genuinely does get driven on the street. “I drive it a lot, actually,” Ahmed says. “I try to get out at least every Saturday; the boys and I really enjoy it. But one of the main reasons I built the car is for events like Powercruise. I want to race it one day just to see what it’s capable of, but I’m more interested in powerskids than racing.”