IT DOESN’T take much to get 500hp out of an LS engine these days – a cam, intake, OTR and good tune-up will get you close – but if some is good, more is always better. Just ask Joshua Loprieato. 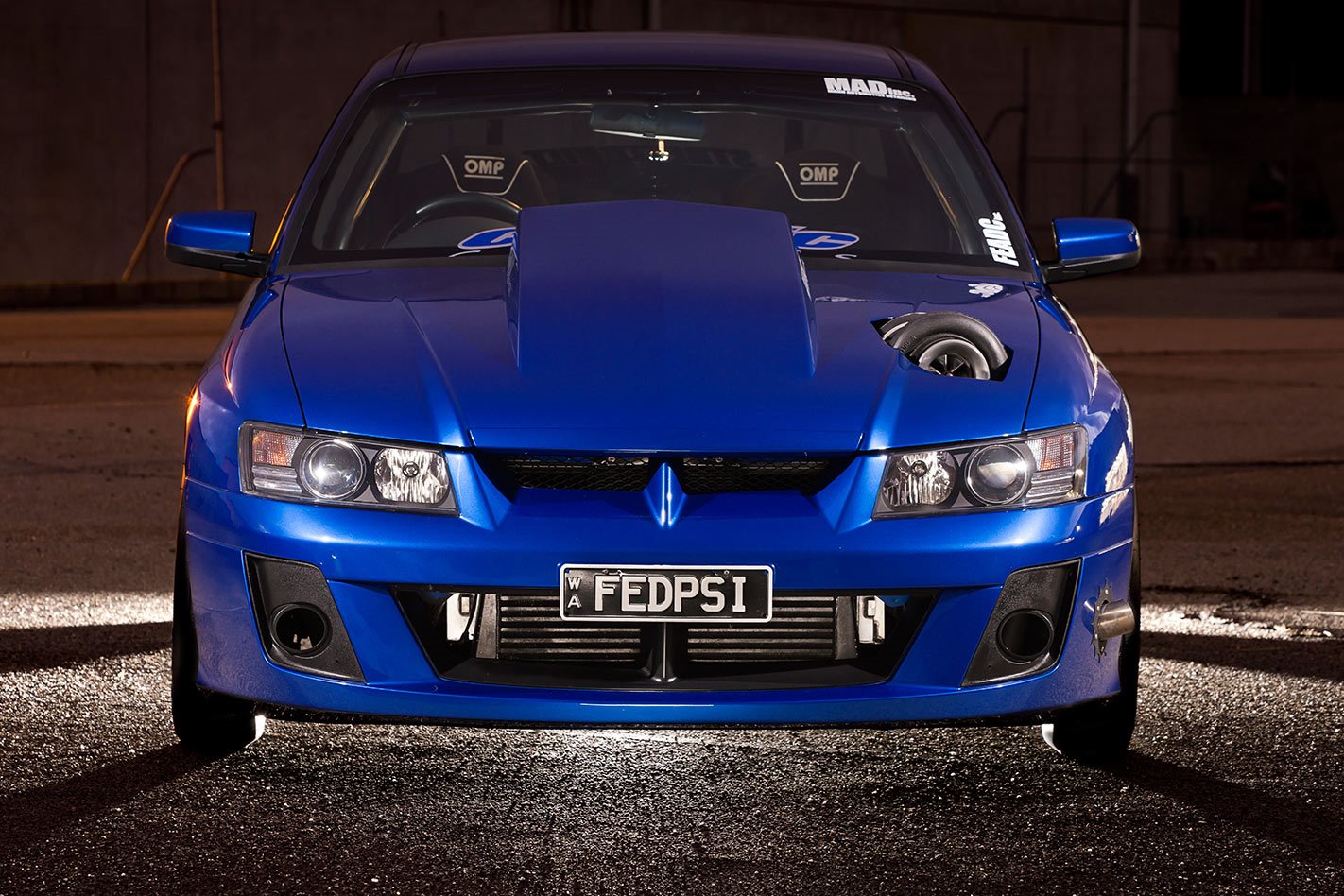 “The VZ ClubSport is one of my favourite cars and I always wanted to build one into a drag car,” he says.

“This one had pretty low kilometres and was a manual, so after I bought it I took it to the boys at Streetbuilt Racing to sort out the tune.” 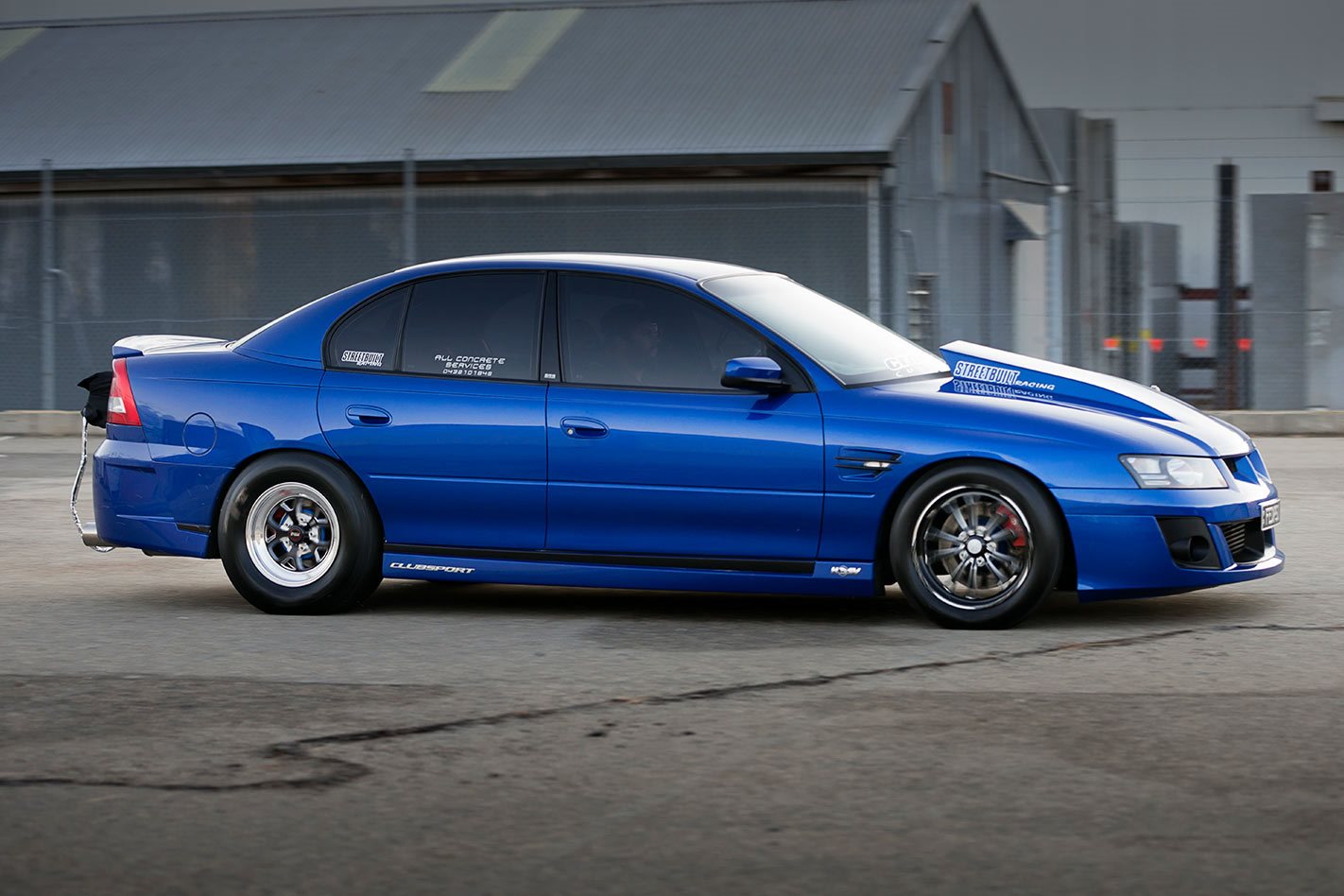 The crew cranked it up to 446hp at the wheels and Joshua used it as a daily driver for a spell, before taking it down to Whoop Ass Wednesday at the Kwinana Motorplex where the car went 12.2 on a set of ET Streets, at which point the bug bit. 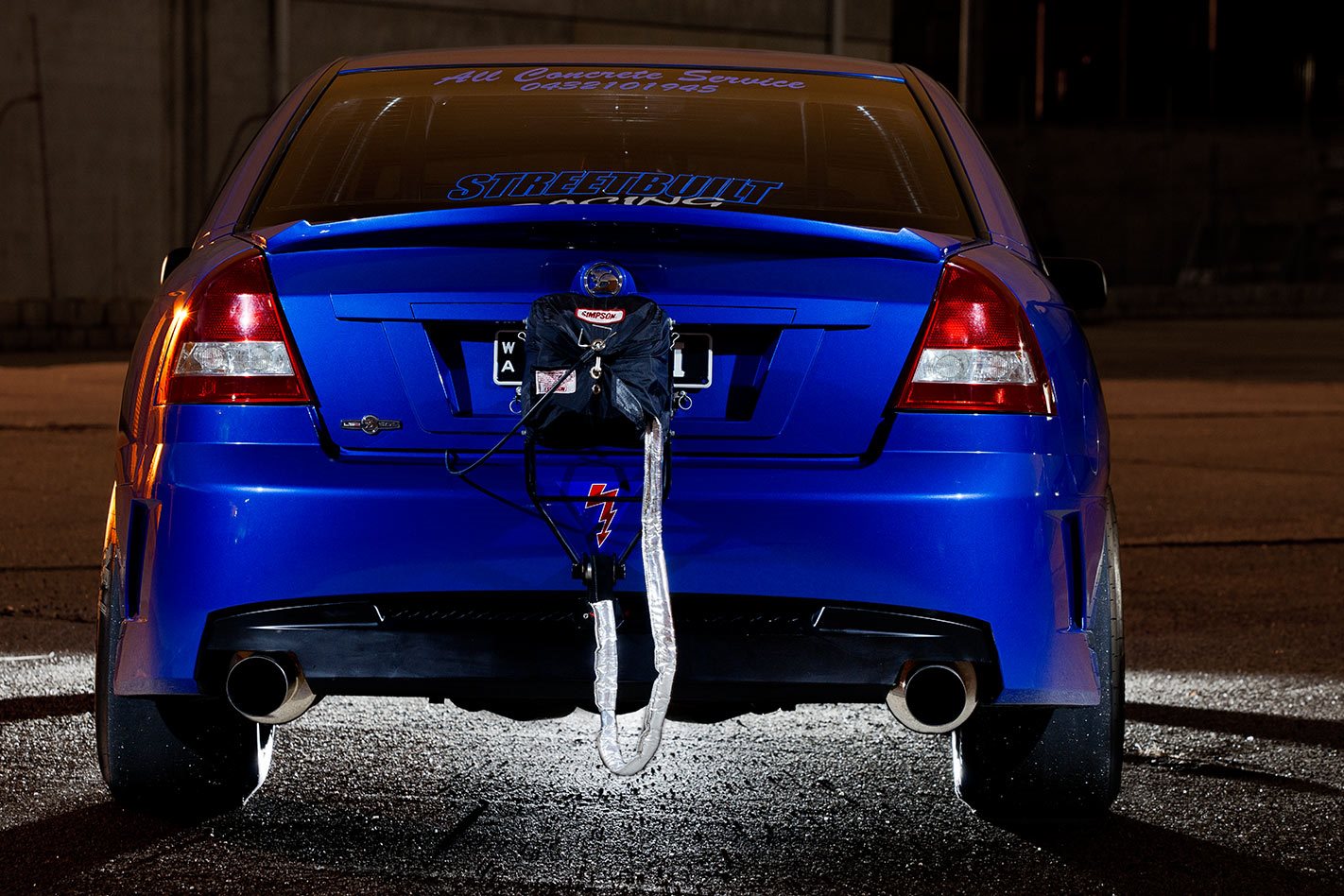 The car runs a full exhaust courtesy of Dom at Prestige Exhausts. The five-inch dump out of the turbo goes into a four-inch single system and then into twin three-inch pipes. It’s actually pretty quiet (some of the time)

“We fitted an ASE single-turbo kit with a 67mm billet BorgWarner to the LS2 and did a full E85 fuel system,” he says. “We had it on the dyno and got a tune in it, then we took it for a drive. That lasted about 30 minutes before the standard oil pump shattered into six pieces and destroyed the motor. I think it was over-revving when the boost came on and the oil pump just couldn’t keep up. It sat in the shed for a couple of years before I thought bugger it, I need to do something with this thing.” 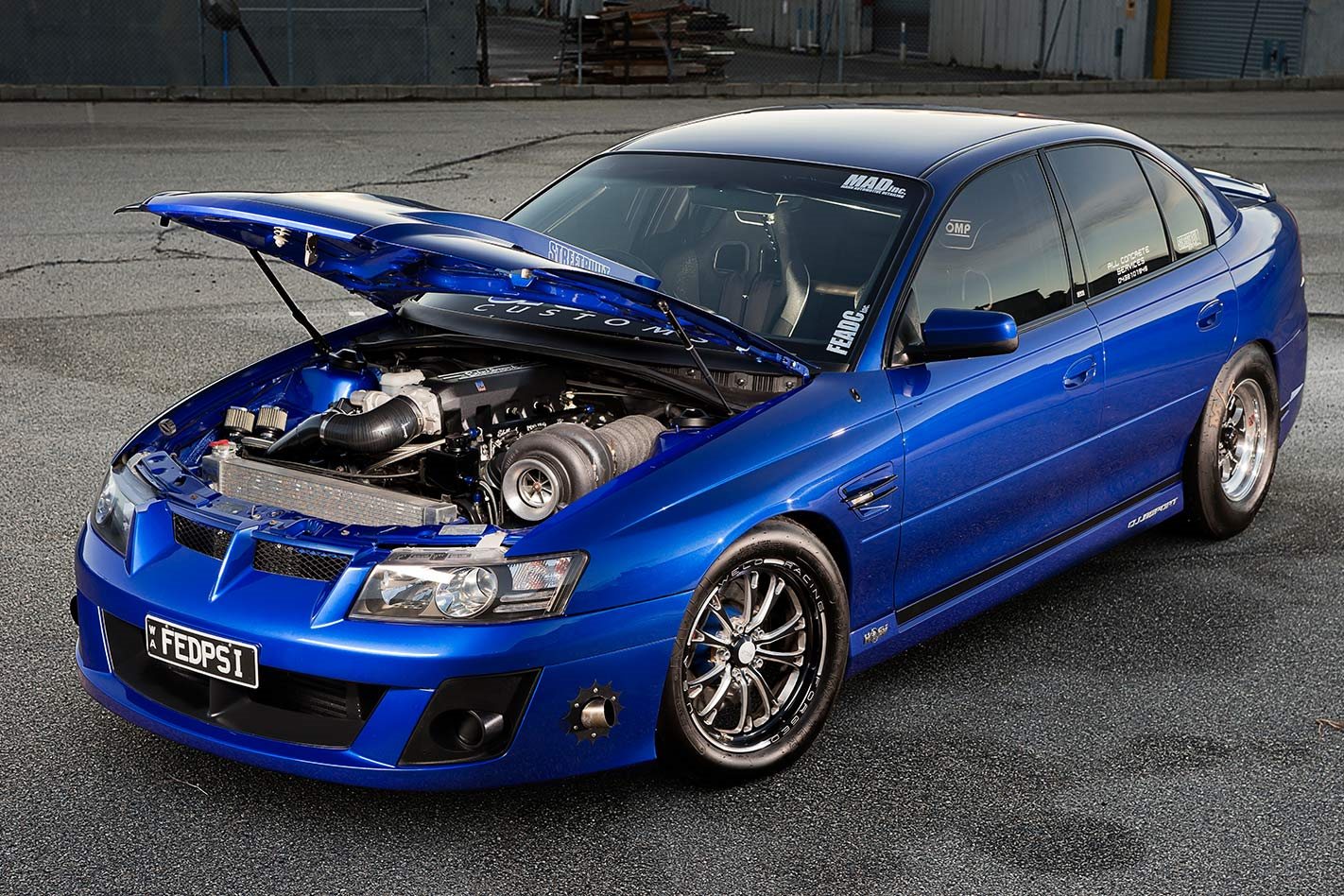 Back when that first turbo went on, Joshua was a lot younger and trying not to spend too much money on his car, but that turned into an expensive lesson and he won’t be making the same mistake again. It’s not quite a no-expense-spared build, but a lot more planning has gone into the new combo. “I got the bottom end of the motor built at Texas Speed & Performance, and then we (Josh and Streetbuilt Racing) built the rest of it. There are guys in the US pushing this same combo to 1500hp at the wheels. They’re pretty crazy over there, but!” 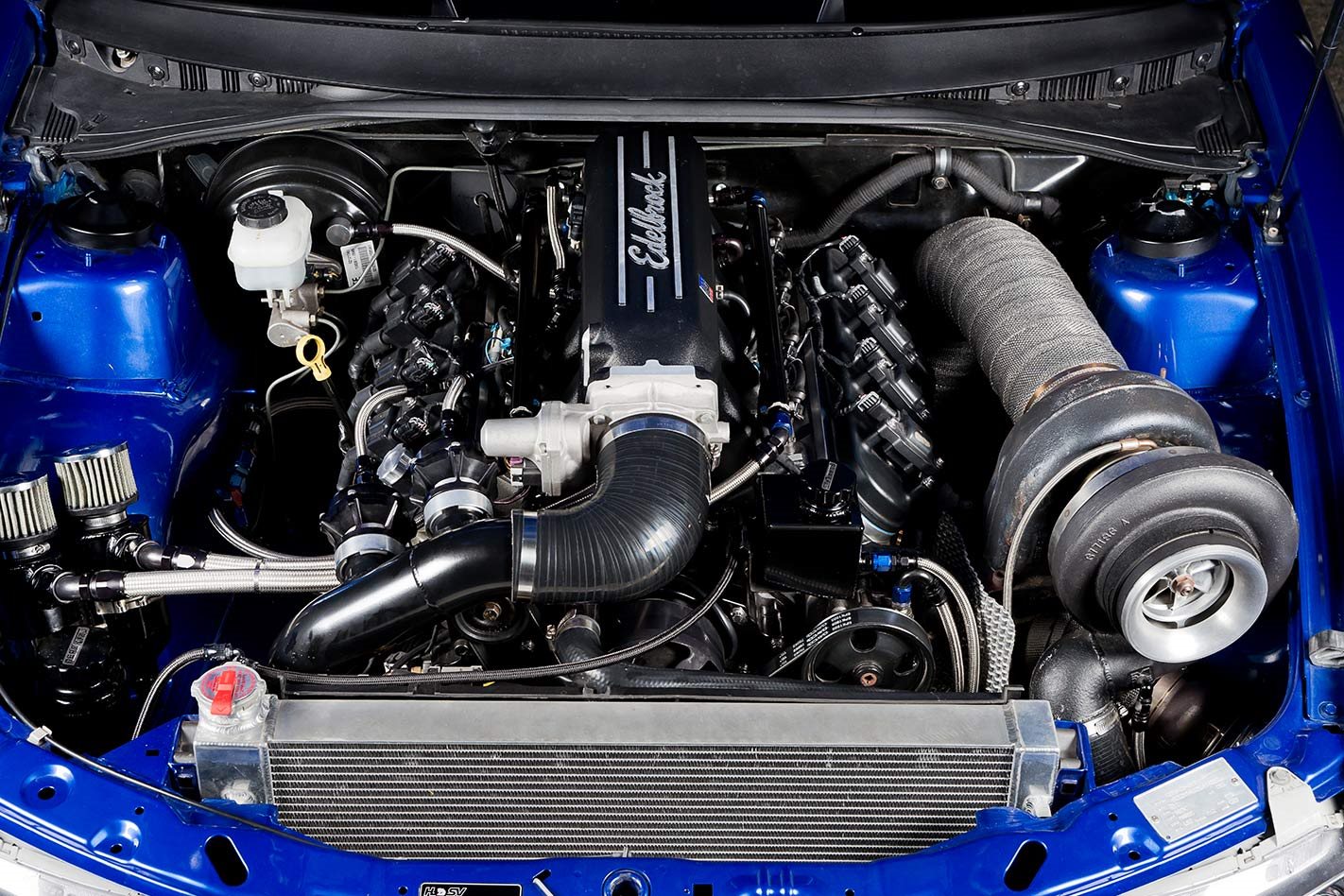 The Edelbrock Pro-Flo intake makes the reverse-cowl bonnet a necessity. It’s no show car, but everything is neat and tidy

Joshua won’t be pushing his that far, although he’s already seen 970 at the treads. “The first tune we put in it with 13.5lb of boost made 836hp. It’s got 21lb in it now, but it was being really grumpy and the intake temps wouldn’t cool down because it was about 35 degrees, even at night time! We really wanted to crack the 1000, but it wasn’t happy getting dynoed that night; the boys reckon with the same tune but on a cooler night, it should easily get over 1000hp.” 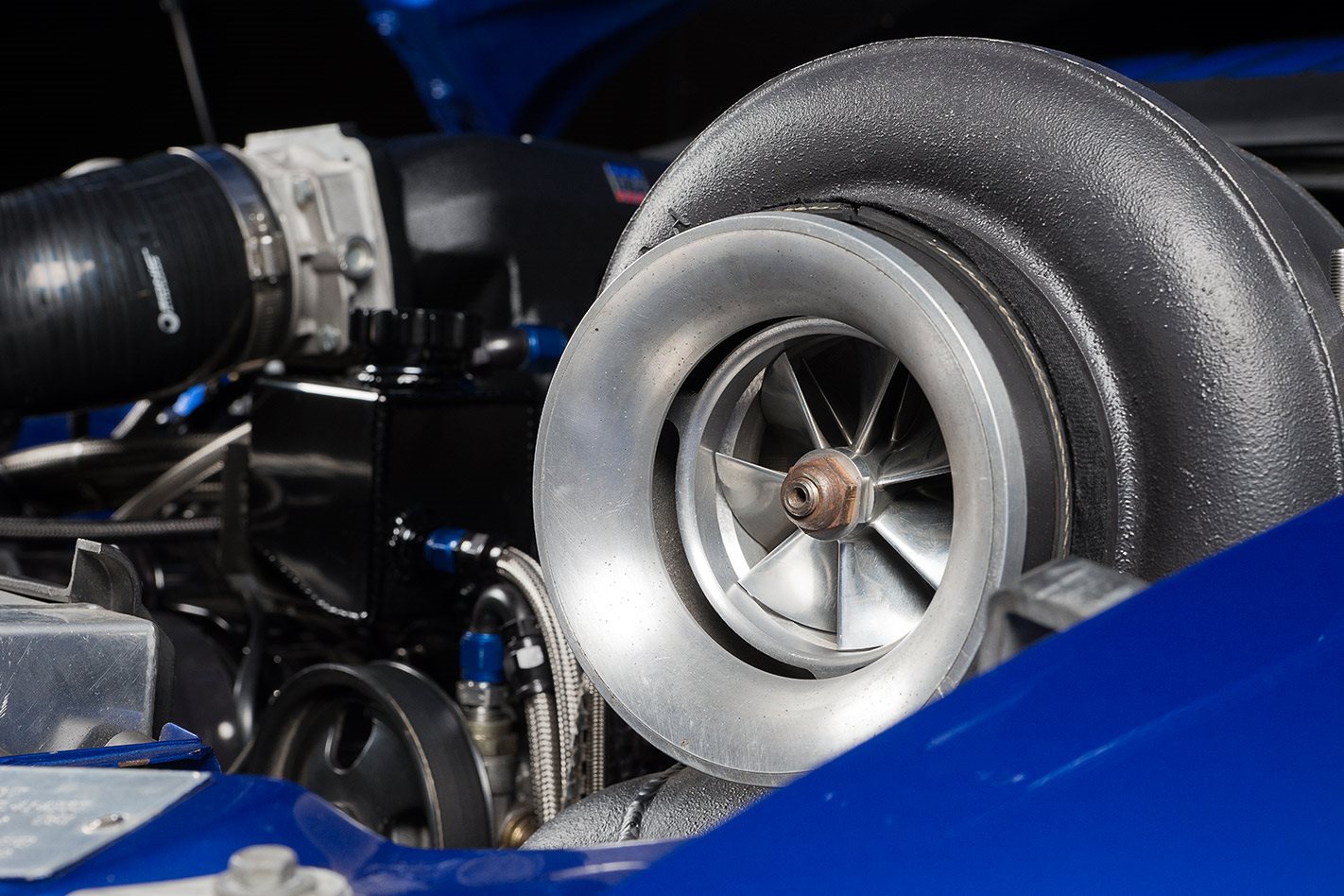 The BW S482 turbo didn’t quite fit under the stock bonnet, so Joshua modified the pipework to make it sit up even higher for everyone to see and to give it plenty of fresh air

The foundation of the engine is a factory cast-iron LQ9 block to which a set of AFR 245cc heads have been fitted. Internally it’s been treated to plenty of good gear: a Callies Dragonslayer four-inch stroker crank, dished Diamond 4.03in pistons and a set of Callies Compstar H-beam rods. That combo pushes the displacement out to 408 cubic inches or just under 6.8 litres. Up top is an Edelbrock Pro-Flo intake that cops the boost from the 82mm BorgWarner S482 turbo via an ASE air-to-air intercooler and custom-built three-inch aluminium piping. 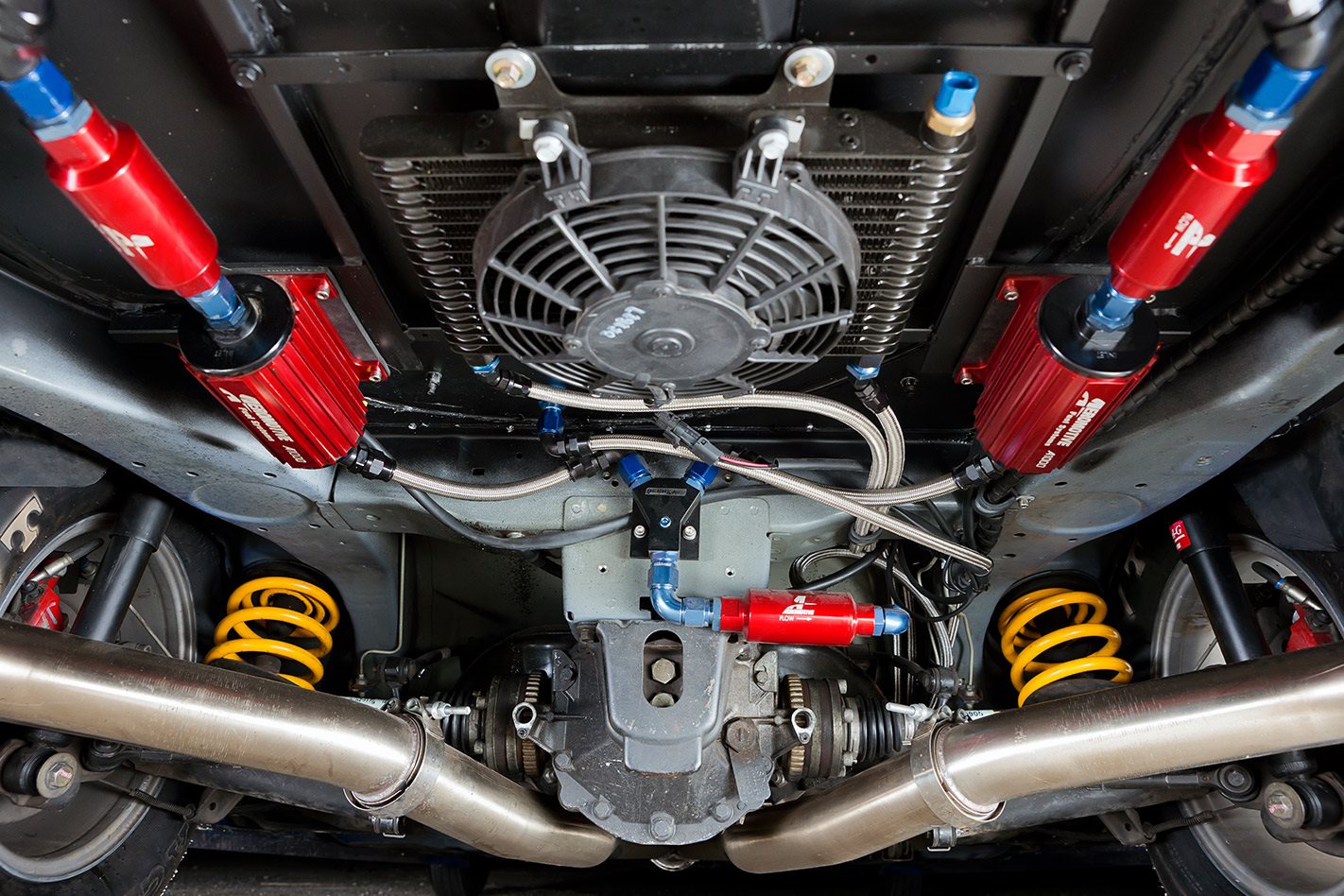 Yep, that's a standard rear end under there, for now. Not surprisingly, the first time the slicks went on, the diff went "I'm outta here!" A nine-inch, four-link and tubs are on the way

Keeping the budget in mind, Joshua had planned to reuse most of the pipework from the old turbo set-up, but he found that the new larger turbo was going to stick out the top of the bonnet just a little bit. “I thought, if it’s going to be sticking out the slightest bit, I may as well hang the whole thing out of the bonnet!” he says. “We ended up cutting the ASE pipe kit up and extending it higher where the mount was, which also let us fit the bigger dump pipe.” Of course, it also looks cool. It’s no show car, but everything ties in well, being either black or unpolished aluminium. Even the AN fittings nicely complement the Impulse Blue paint. 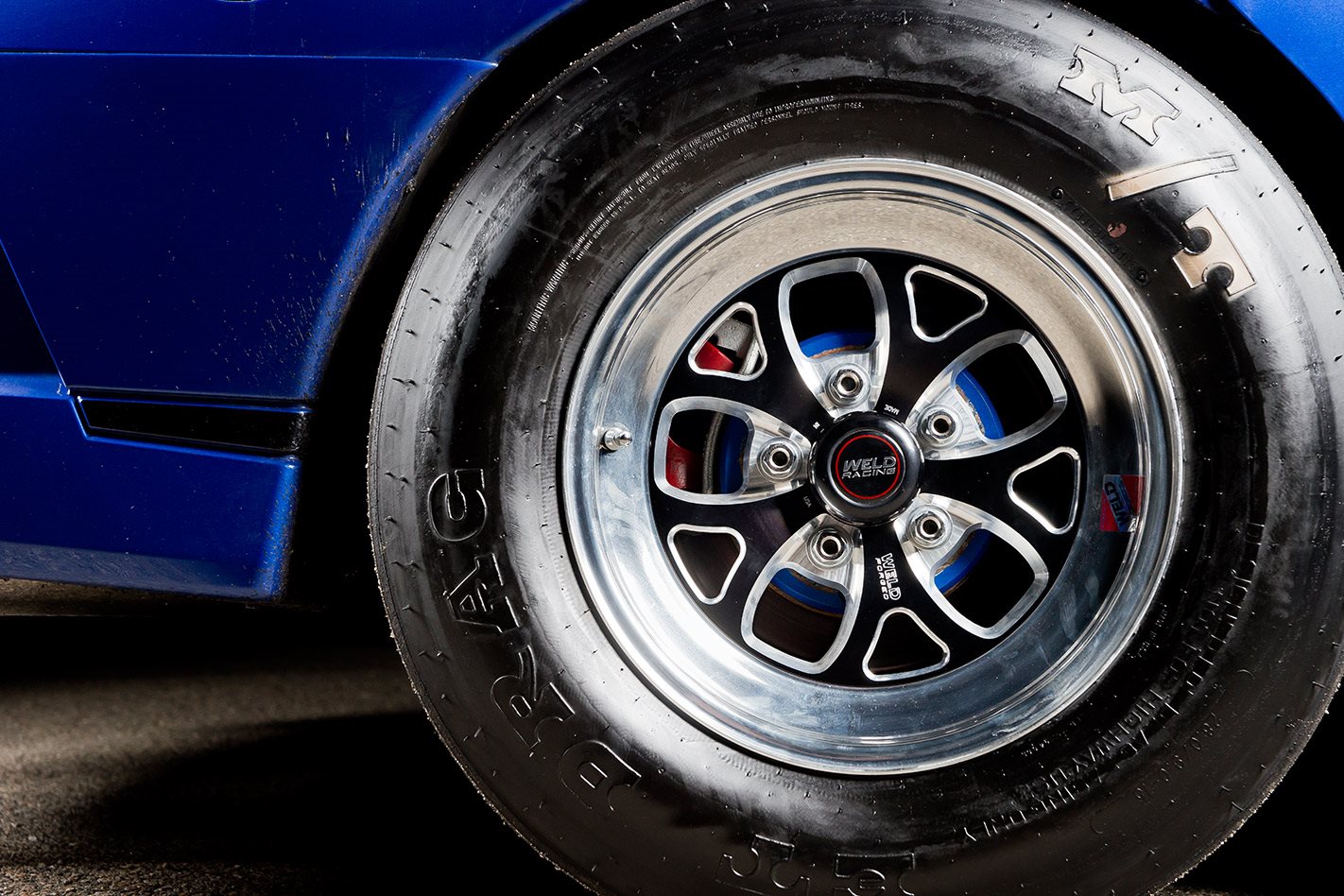 Plans are to race this car for a couple of years before stepping into something lighter and quicker, but before that happens, Josh has got a bit of work to do on the rear end. “It had a pretty serious Final Drive tailshaft with all the Strange yokes and what-not, but the diff centre was straight out of the Holden factory. It lasted quite a long time; we did the 9.90 and a fair few other runs that night, but that was with a set of crusty ET radials on it. Once we put the full slicks on, it just went bang straight away. I’ve already ordered a four-link for it.” 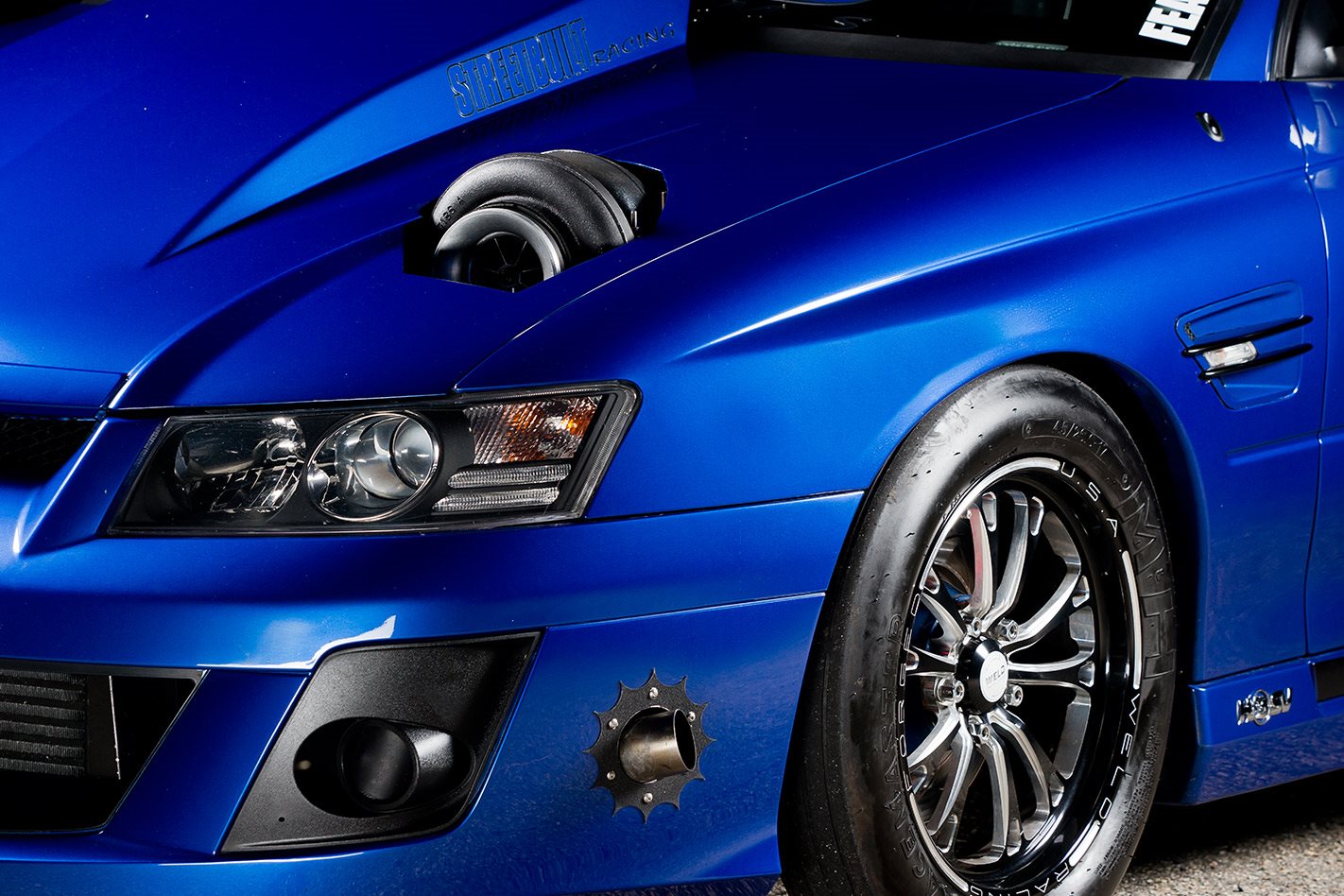 A Tial 60mm wastegate exits forward of the front wheel, and does get loud when the car is staged on the two-step

While he’s at it, there will also be some tubs going in that should easily accommodate 15x12in rims while keeping the rear seat intact. A Racepak dash is on the way as well. 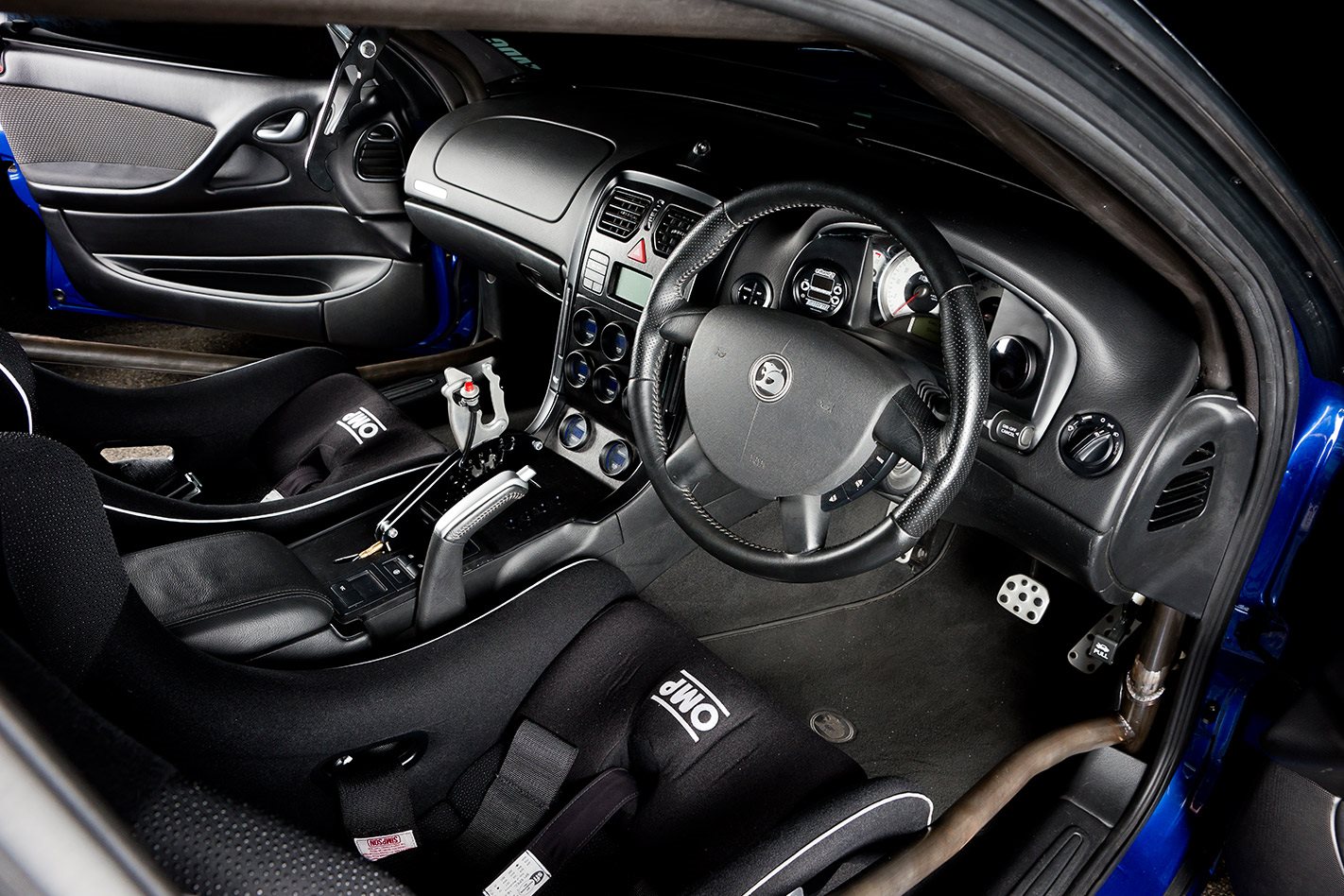 It almost looks original inside except for the seats, six-point ’cage by Cronic Customs and the Precision Performance shifter, along with a whole heap of Auto Meter Cobalt digital gauges

With a trap speed of 146mph, this Clubby should be capable of running in the 9.30s. With the transbrake, a full-throttle pass and some traction, numbers like that should be no problem at all. 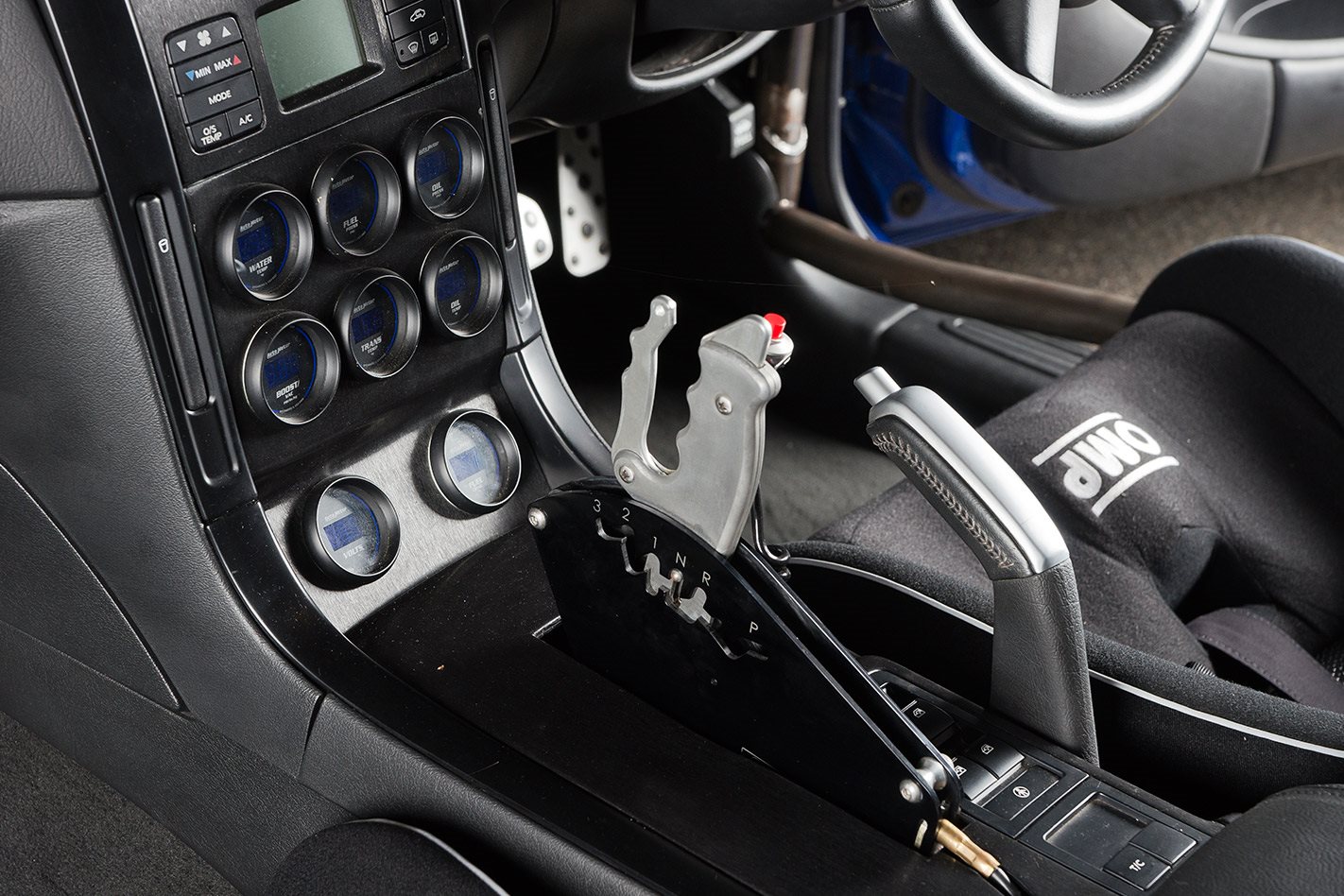 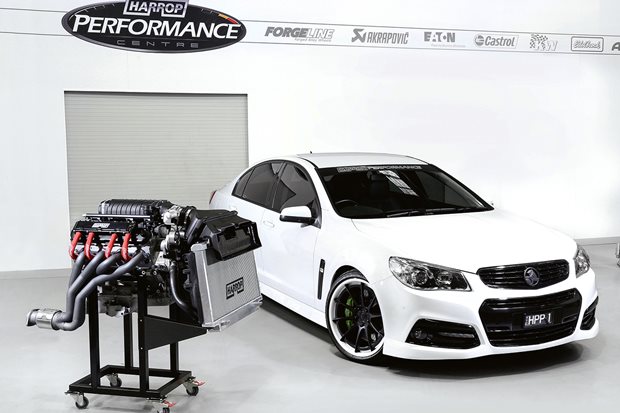