There’s no shortage of stupid-fast turbocharged VL Commodores cruising the streets and lapping the drag strips of this wide brown land, but Goran Ivanovic’s is different. Better, even. Goran has been there and done the six-cylinder VL Turbo thing with considerable success. Back in the early noughties this very car was sporting a twin cam-headed RB30, and it managed a best ET of 9.3@148mph in full street trim. 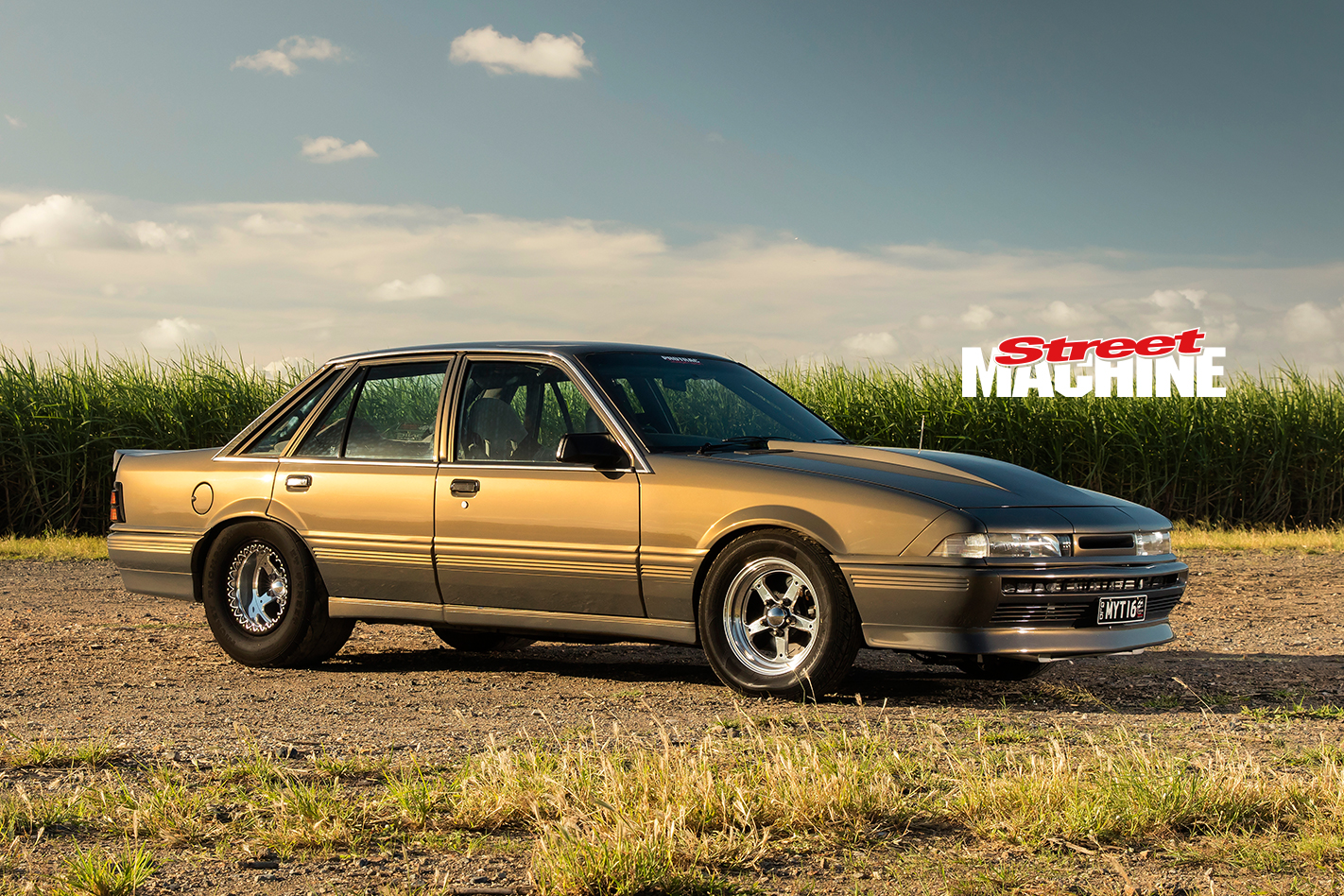 “It was the second-quickest street-registered VL in the country at the time – and on conservative boost – but it had its problems,” Goran says. “I ended up pulling the motor out and selling it as a roller to a fella down the road for $25,000, because I knew I couldn’t afford to fix it if it ever broke.” 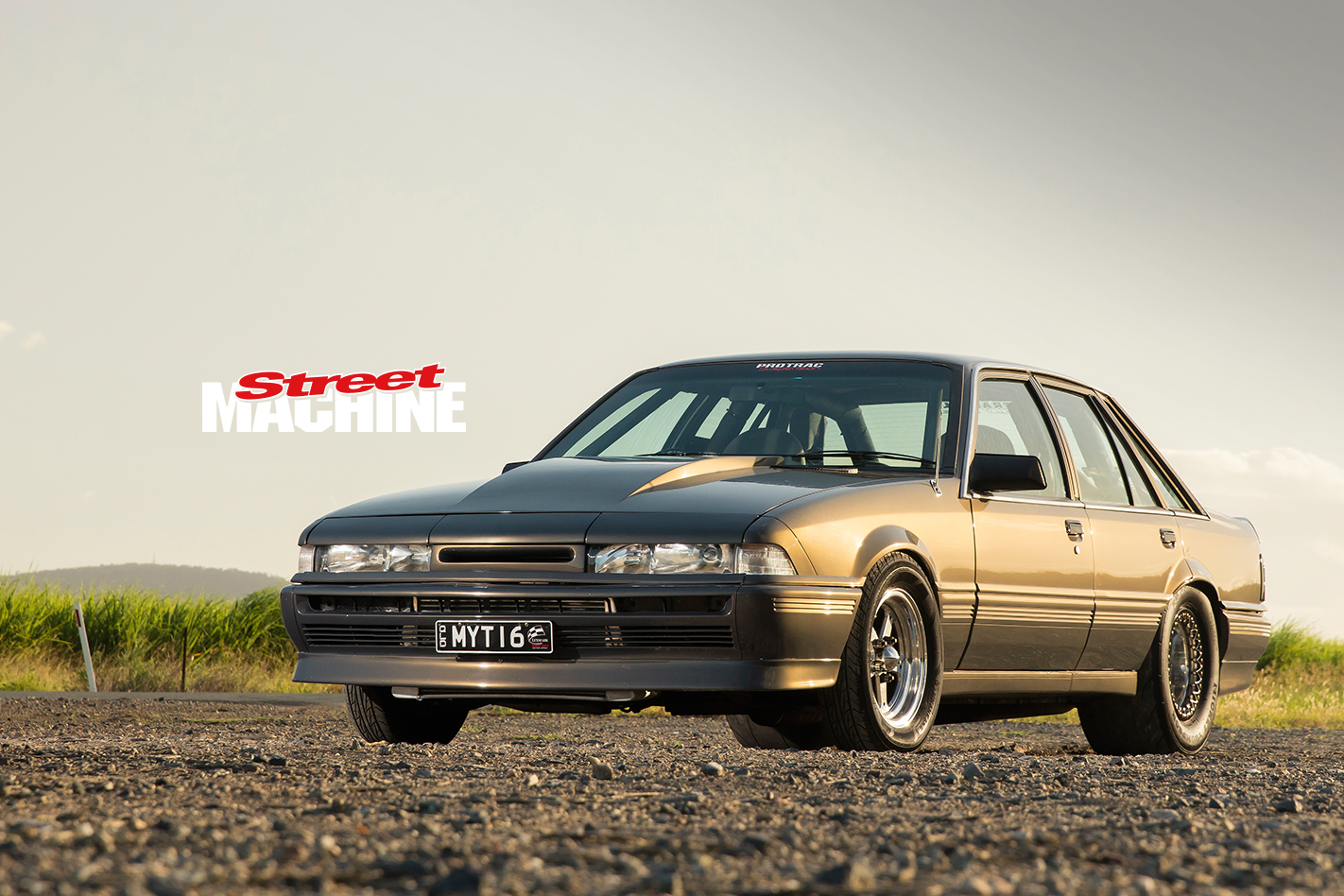 It turned out to be a fairly enterprising move, because six years later he bought it back – basically untouched – for $12,000, then set about powering it up with a string of boosted LS-based combos.

A 5.7-litre LS1 with Cometic head gaskets, a cam, rod bolts, head studs and a Precision PT88 snail went in first, yielding a best ET of 8.9@152mph. Eventually it began to suffer from cap walk, so the next package was based on an alloy six-litre block with dowelled mains, and it went as quick as 8.4@164mph. Following on from that, an LM7 5.3-litre went 5.31@133mph in the eighth-mile, but had head gasket problems and eventually hung a rod on account of a blocked injector. 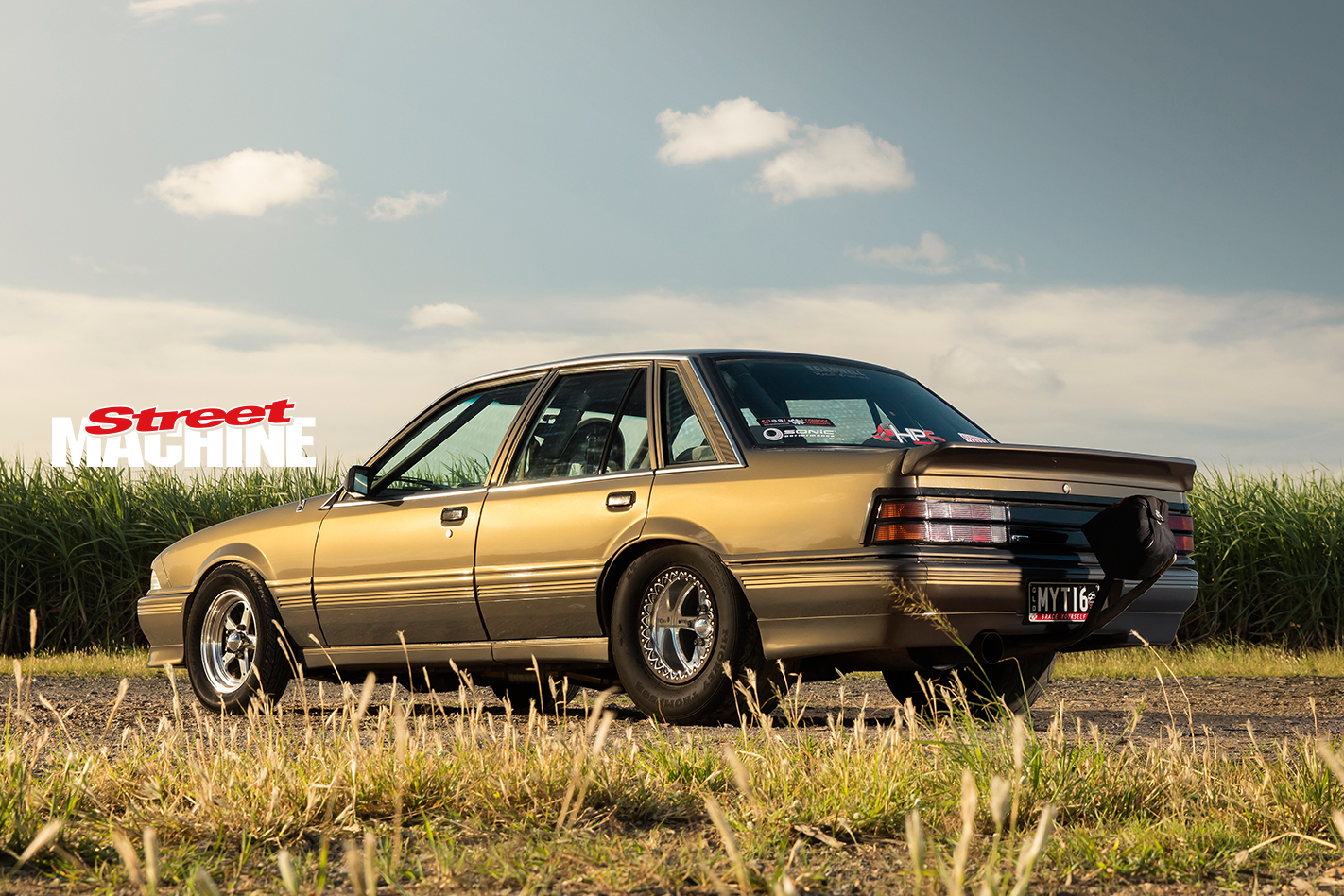 The current combo is the baddest of the lot though, making a mental 1021hp at the wheels on pump E85 and powering the VL to an 8.1@165mph in street trim. Hitting the limiter at the 1000ft mark, there’s more left in the pipeline. 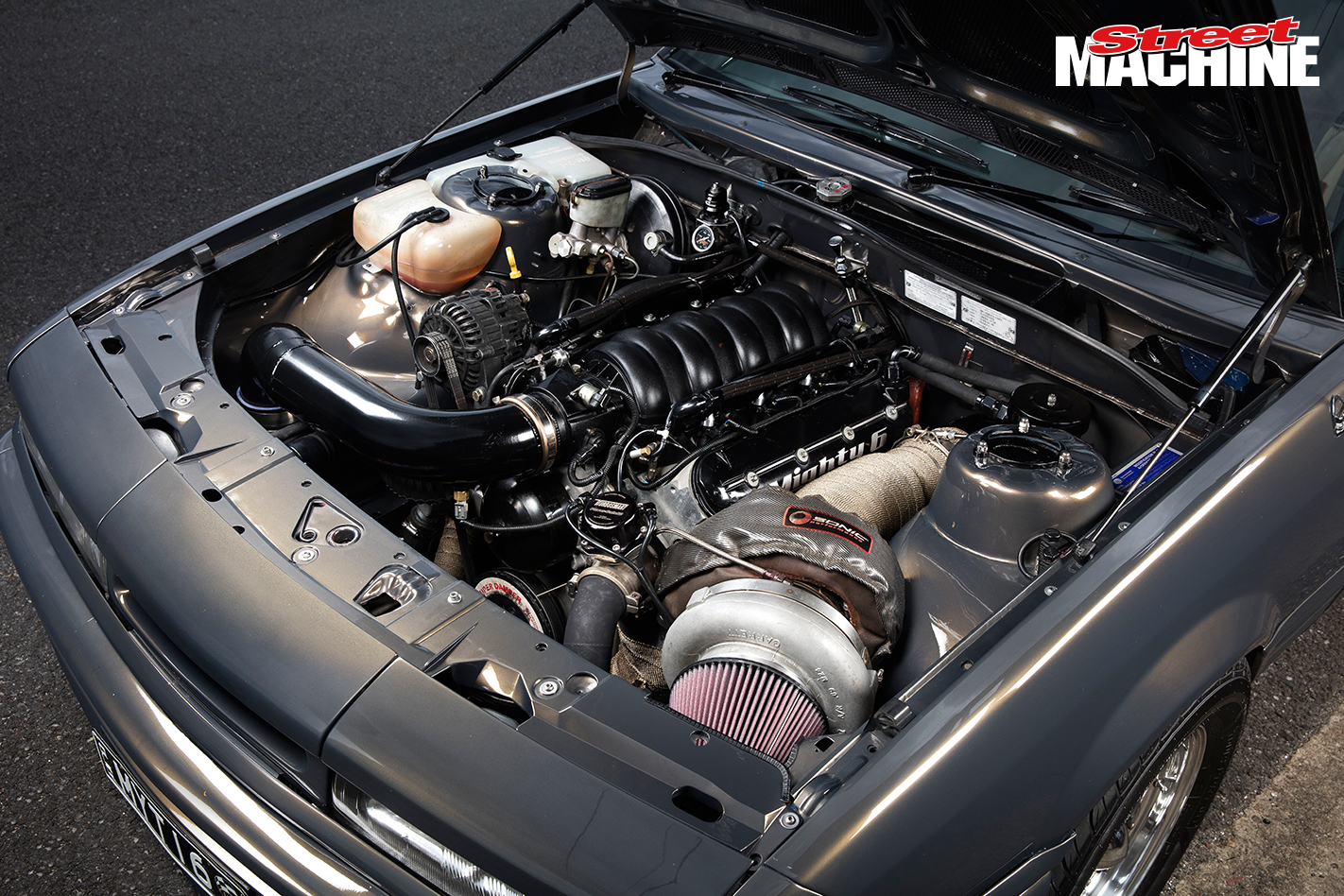 “Once you do a turbo V8 you see what power and driveability is all about,” Goran says. “I’d always liked V8s and people were just starting to turbocharge LS engines at the time. The car was something a little bit different back then; it’s pretty much the norm now, but it’s effective. They’re a great engine to work on and they make great power.”

As with the majority of the build, Goran handled the engine assembly personally. “You can’t afford to be in this sport unless you’ve got plenty of money, or you do the work yourself,” he says. 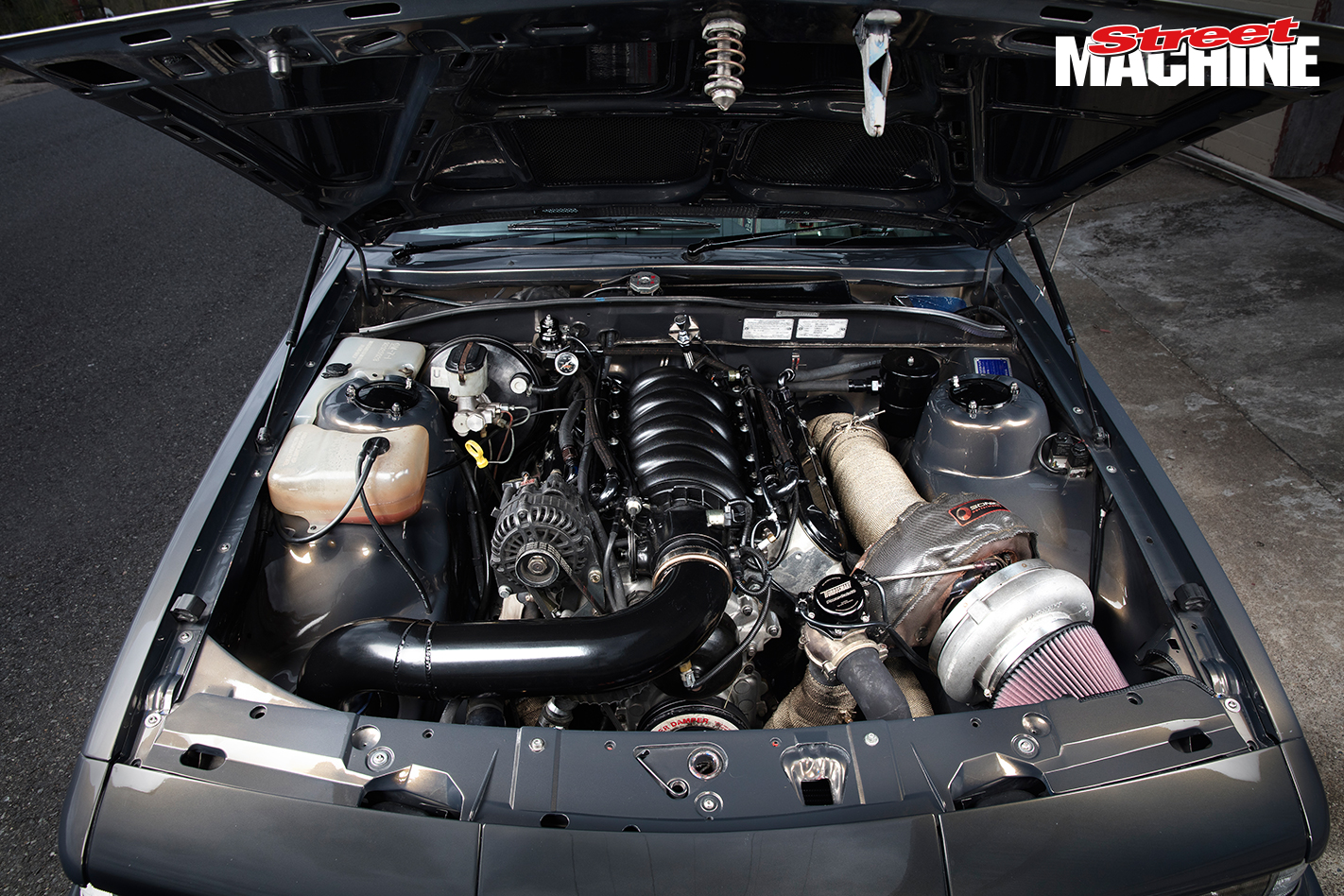 To a six-litre iron LS block, he added a Spool billet crank, Callies Compstar rods, JE forged pistons and a COMP Cams 239/243 stick. Testament to the efficiency and resilience of the original engine is the fact that the factory GM block, 243 heads, valves and inlet manifold have all proven capable of over 1000rwhp with the right amount of fettling. 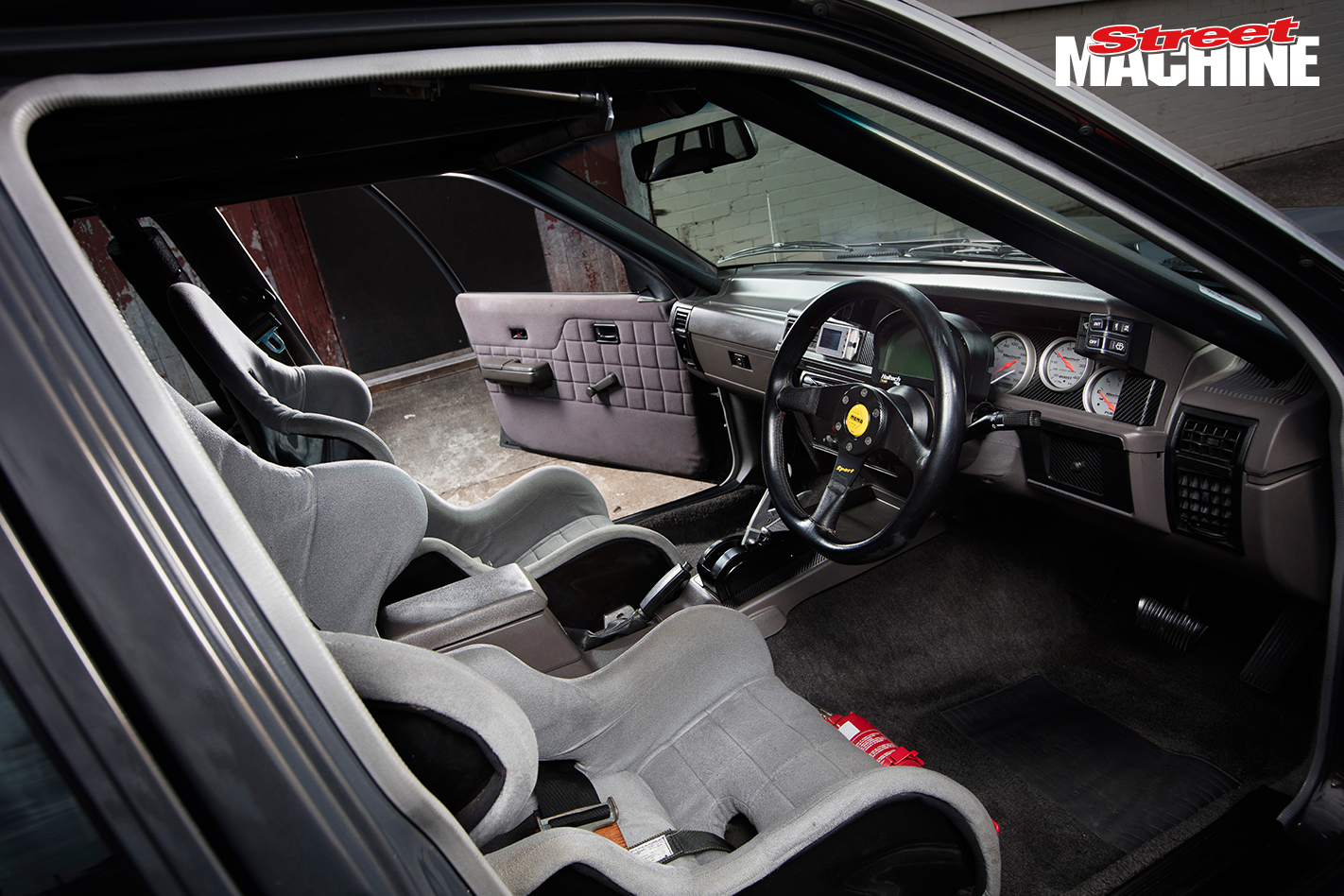 The turbo is a Garrett GTX50, and the induction system is owner-engineered and surprisingly simple. It runs cast-iron GM truck exhaust manifolds from the States, with the two-bolt flanges cut off and V-band flanges welded on, leading into a custom 2.25in crossover pipe. Goran used a 60mm Turbosmart wastegate and the same 170mm-thick, 600mm-wide custom-made intercooler that was on the car when it was a six-banger. A Haltech Sport 2000 ECU calls the shots. 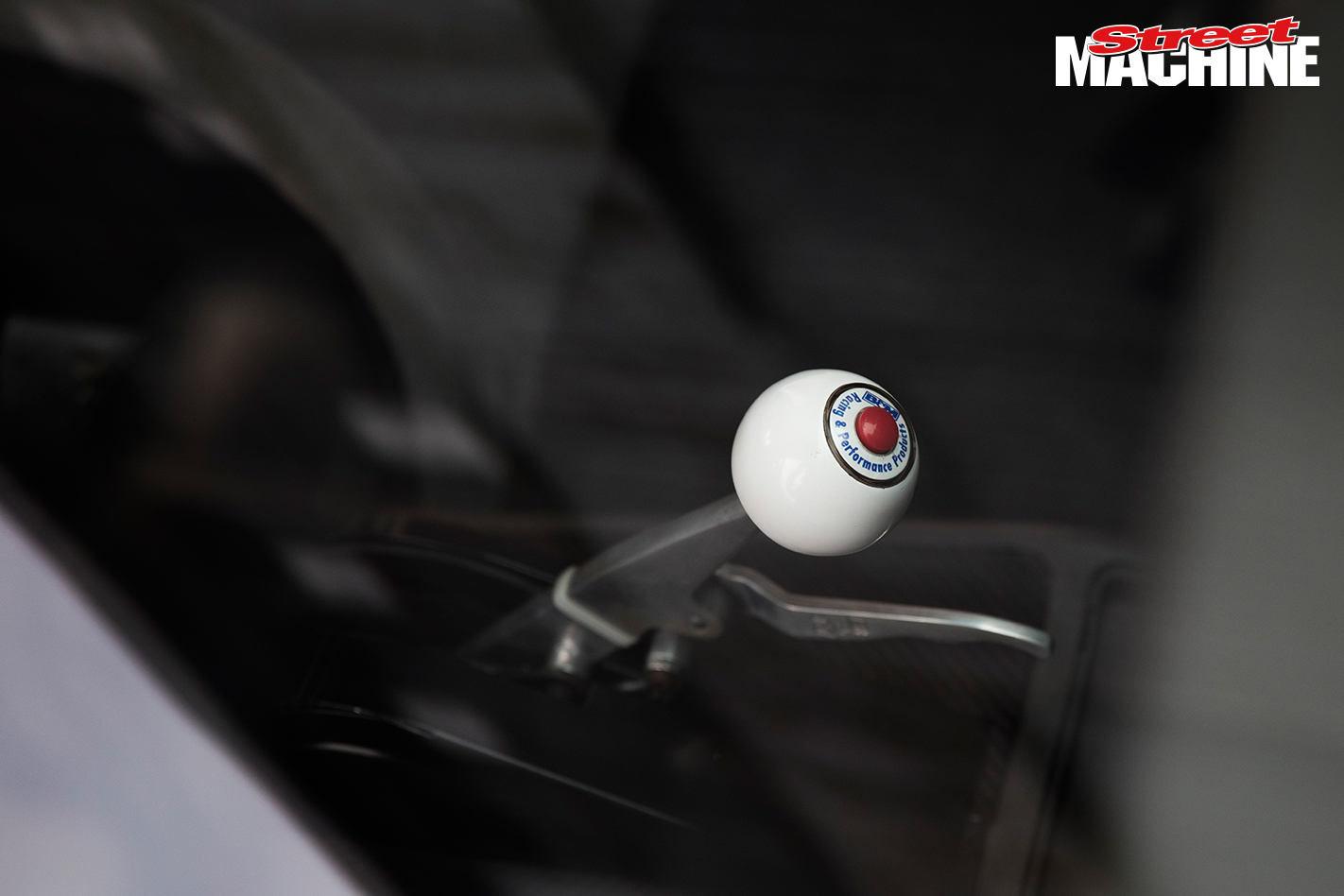 It’s all backed by a BTE two-speed Powerglide with a 2500rpm PTC converter, and a nine-inch diff packing a Harrop centre and 35-spline axles, suspended in an adjustable four-link rear end. The car was already mini-tubbed when Goran first came to own it way back in 2003, but as part of this latest build he decided it needed a greater grip on the earth and knocked up a bigger set of tubs for it – big enough to accommodate a 325/50/15 Mickey Thompson ET Street mounted on a 15x10in Champion beadlock rim. 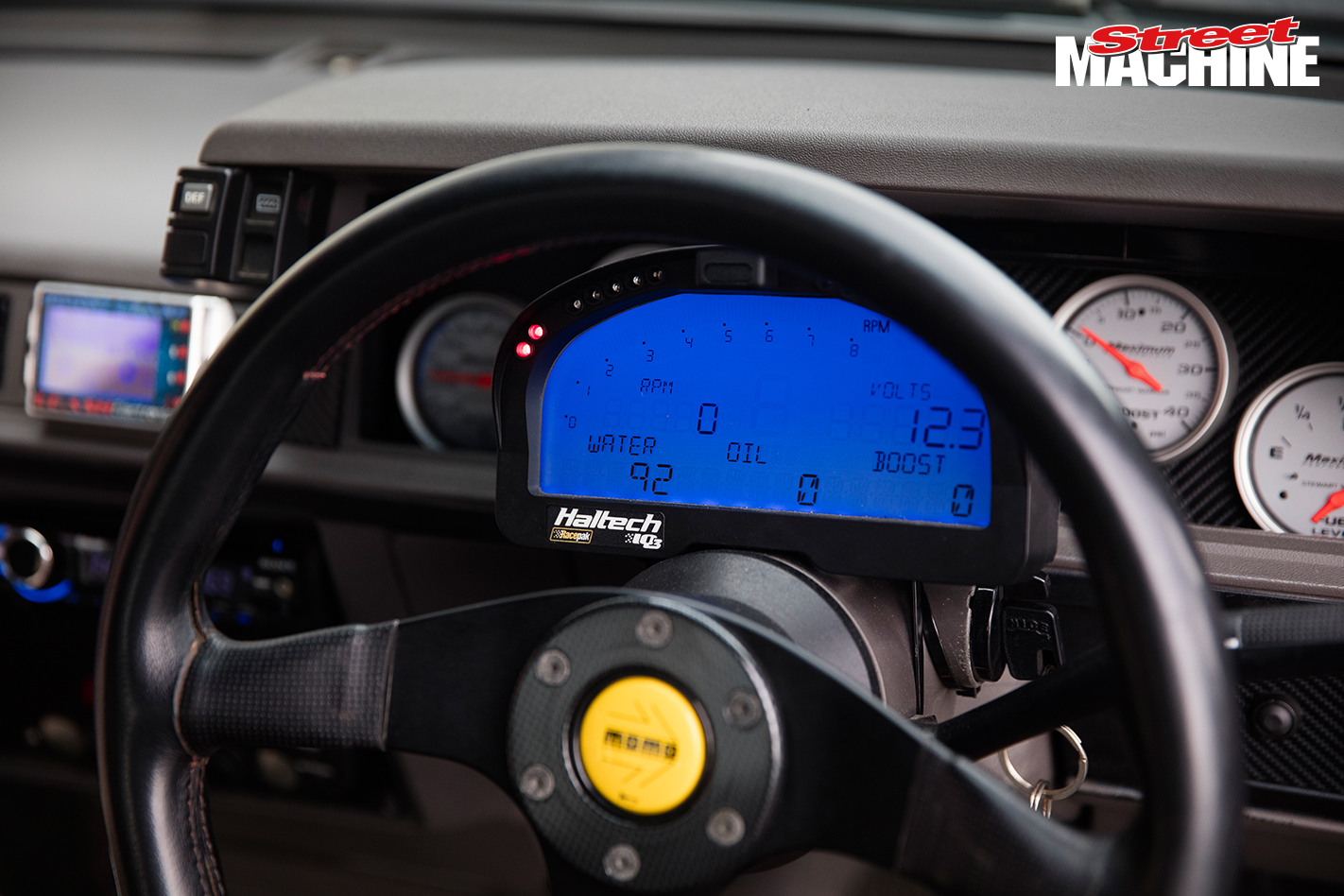 He also felt the car was due for an aesthetic overhaul, and a departure from the Calais look it had worn for some years. “I thought: ‘Stuff it,’ and fitted the LE kit, gave it the stance I always wanted, then sanded it back and painted it. I did all the fab work myself too, including clearancing the inner guard for the turbo and modifying the radiator support. The only thing I didn’t do myself was the dump pipe.” 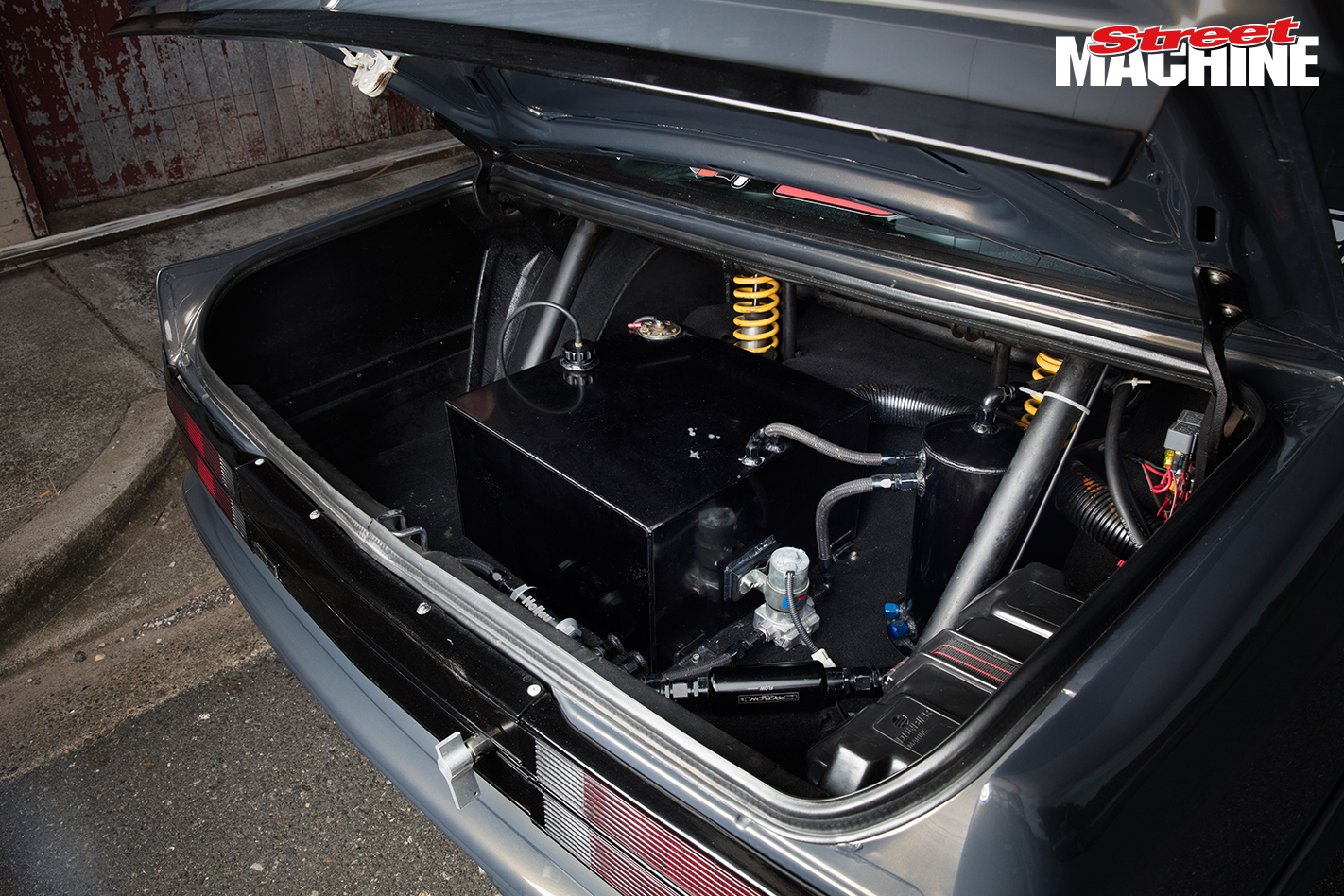 Goran’s VL is a true owner-built street car that sees regular road miles, drives to the track and runs fast times in full street trim, then drives home. “The only thing I do to the car when I get to the track is bolt the ’chute on,” he says. “It runs on pump E85 and radial tyres, and I drive it all the time. I’m always cruising it to the Gold Coast or Brisbane CBD for dinner with the family. I drive it a couple of times a week and I’ve probably done around 20,000km in it.” 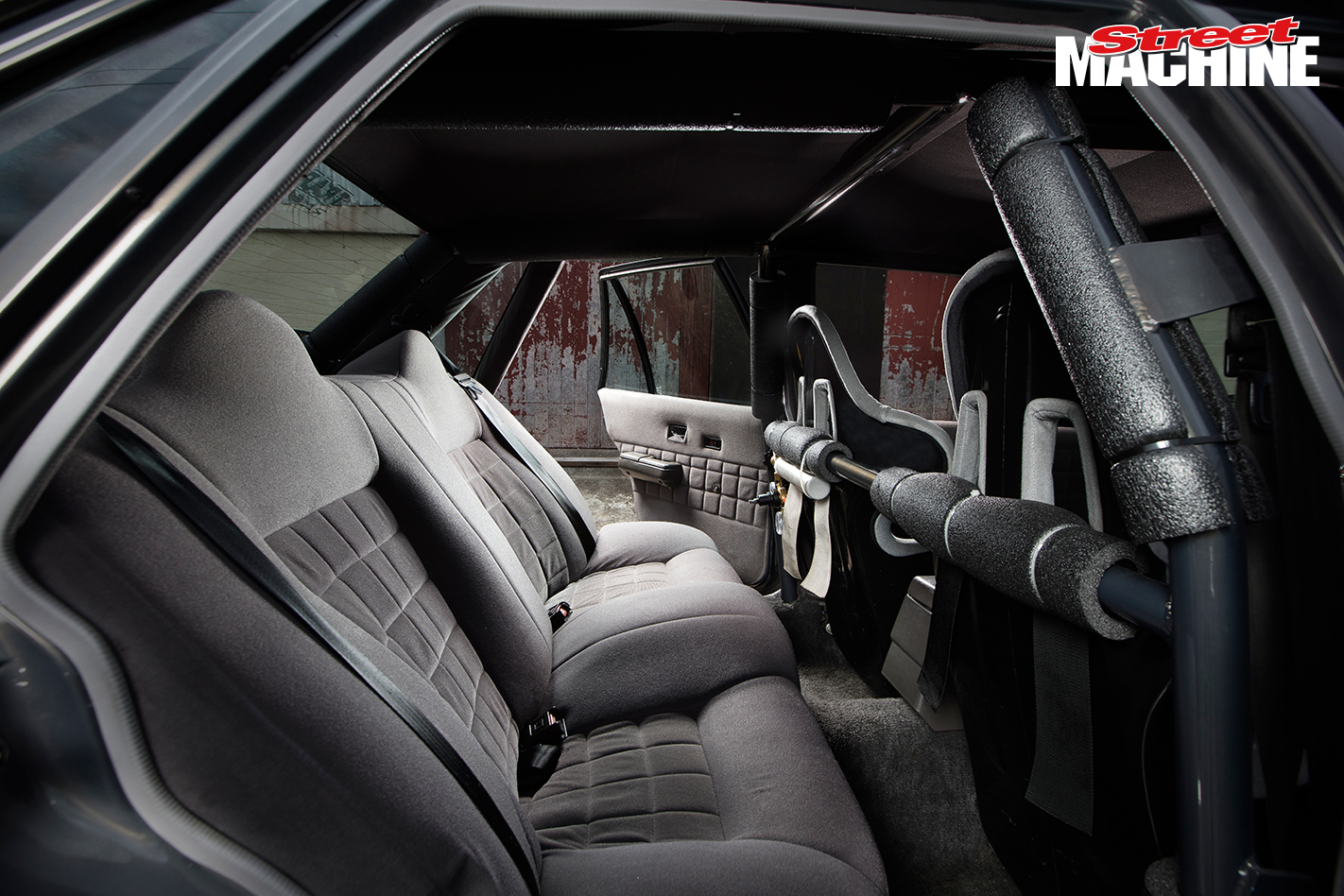 He’s achieved a lot with the car to date, but is by no means content to rest on his laurels. The true potential of the new combo is yet to be realised at the track, and Goran is out to make a point. “As far as dyno numbers go, I don’t really care what it makes, but I really want to drive to the track, run a seven and drive home,” he declares. 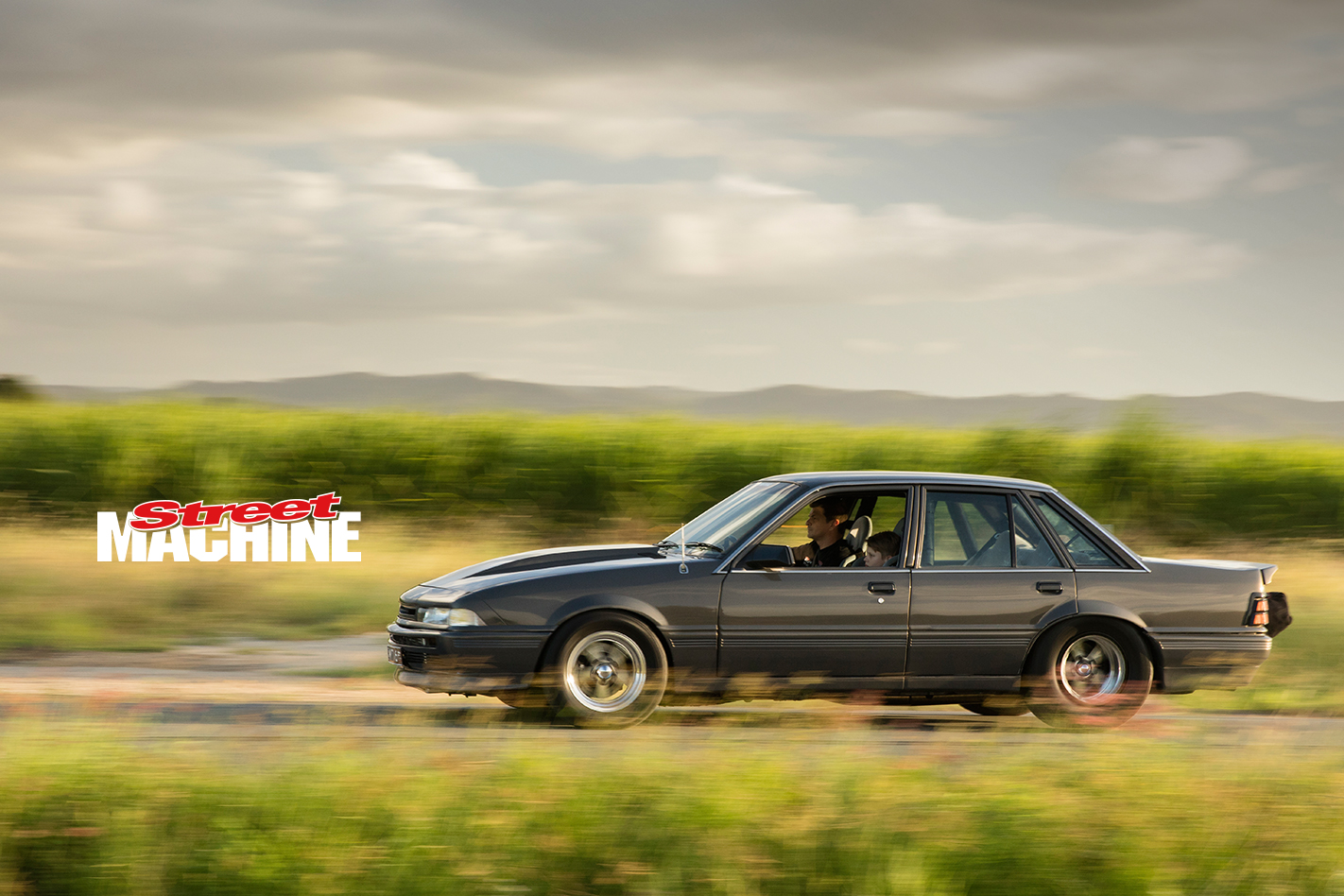 “I don’t care if it’s a 7.99 as long as it starts with a seven, and all I want to do to run that time is turn the boost up and bolt the ’chute on; everything else will be exactly as I drive it on the street. There are some fast street cars around, but most of them get to the track and change fuel, tyres, tune-ups and who knows what else. I want to run a seven in proper street trim, as it gets driven on the street.”