When your nine-second IRS drag car is UNFAIR, you should probably step it up with a 1000rwhp 427ci Commodore headed for the sevens!

WHAT do you do when you’re running consistent low nine-second passes and you want to go a fair bit faster, but don’t want to cut up your neat VP Calais? You build a killer twin-turbo 427-cube LSX-powered VC Commodore like Melbourne’s Mark Aldington. Regulars around the Victorian drag scene would know Mark’s burgundy Calais, UNFAIR, which knocks on the door of the eight-second bracket and retains the Holden-supplied rear-end. His new car, dubbed ISFAIR, is this eye-searing early-girl Commodore – and a whole new batch of nasty.

This article was originally published in Street Machine LSX Tuner #4 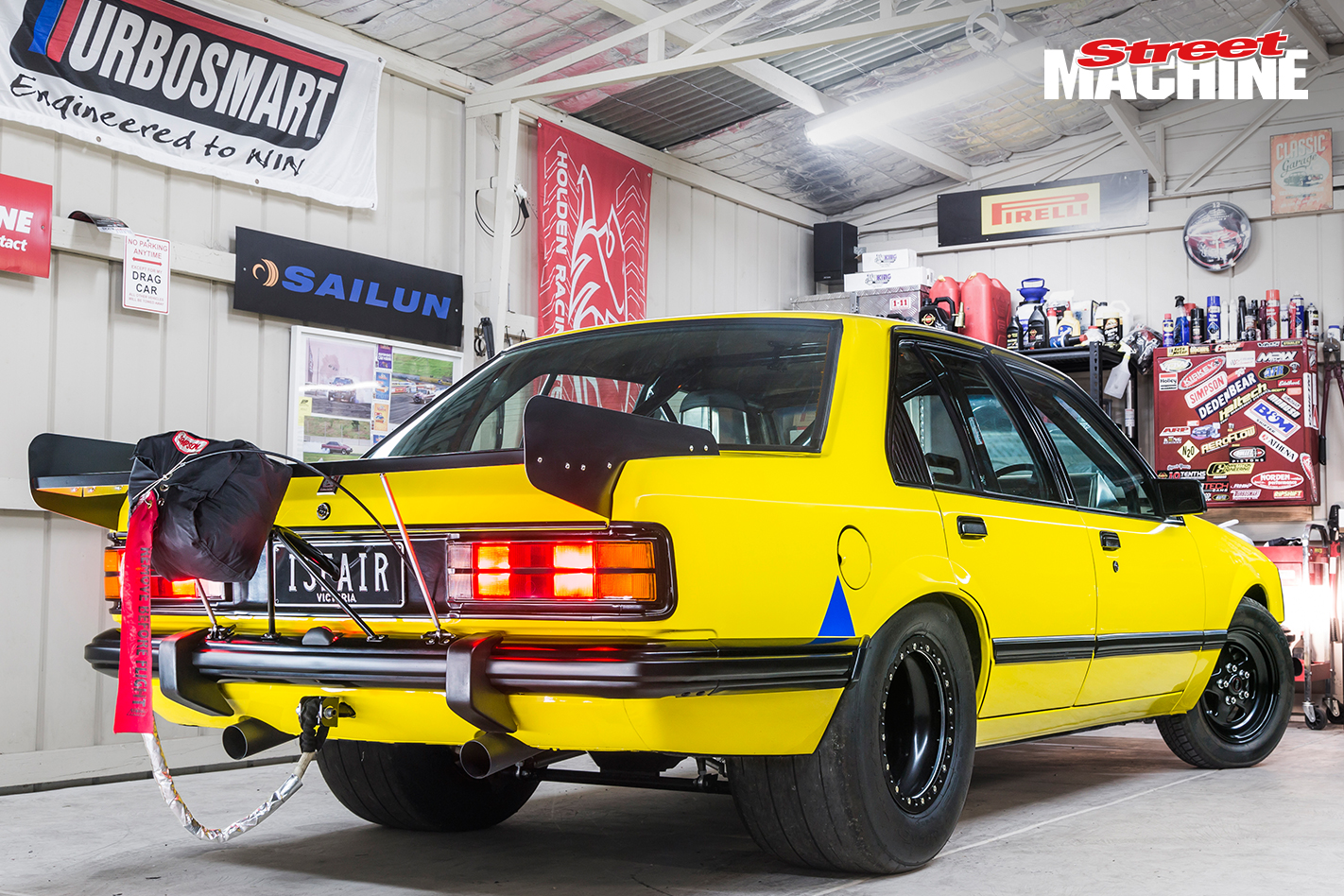 “I bought it because I didn’t want to cut up UNFAIR, which I like having as a nine-second IRS car,” explains Mark. “This VC shell hasn’t been on the road in the last 15 years – it hasn’t seen any rain in all that time.”

The centrepiece for ISFAIR is definitely the engine, a similar combo to what Adam Rogash has in NOSHOW and builds on the super-reliable combo Mark had in UNFAIR. “Adam Rogash from MPW designed the turbo manifolds, but Top Torque and I designed the engine combo, then Sean from Top Torque did all the machining and bottom-end assembly,” explains Mark. 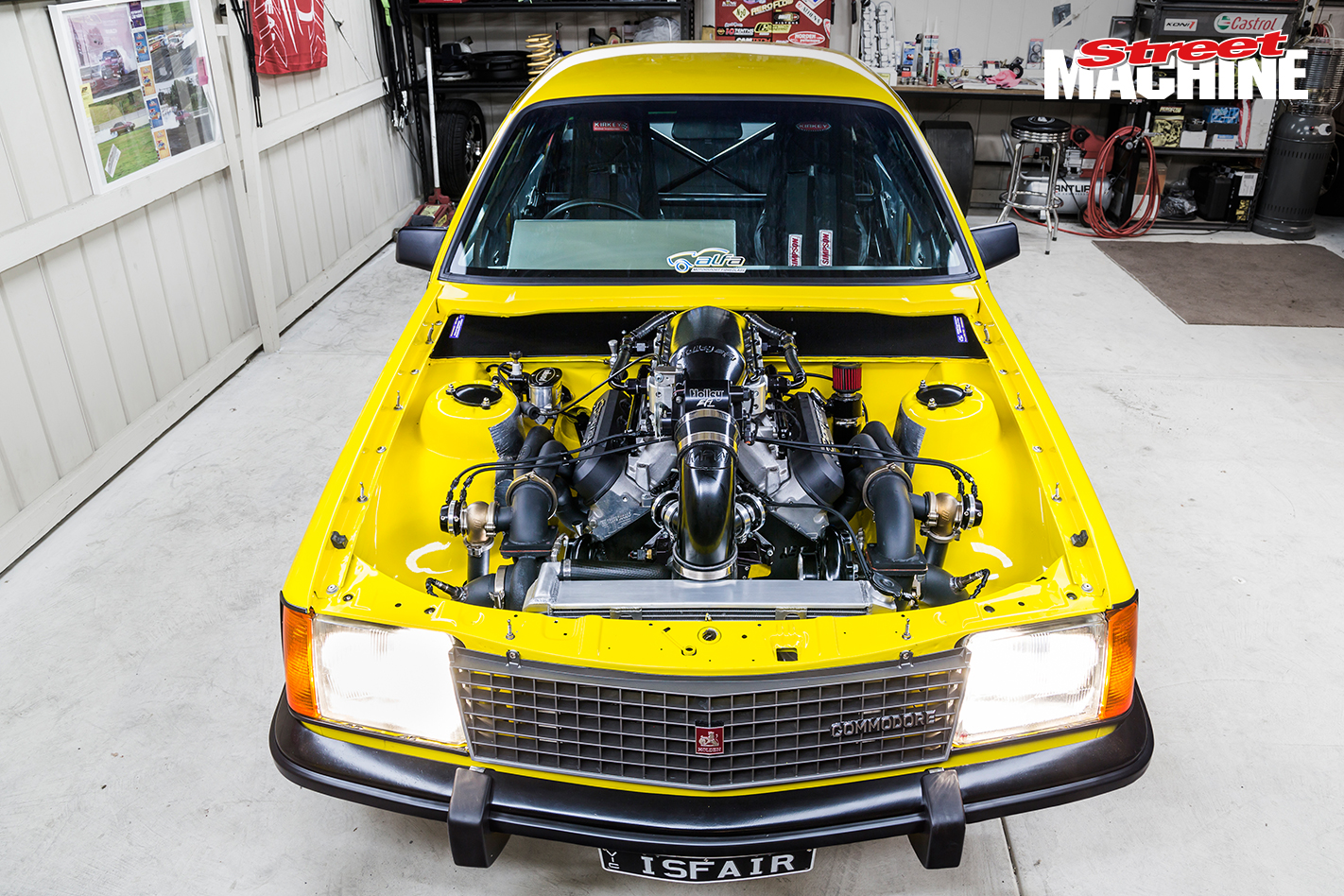 The base is a 427-cube LSX block with Carrillo rods and CP Bullet pistons, and a high-pressure oil pump to ensure the rotating assembly always spins freely. The crank is a Callies billet non-twist item that Mark ran in UNFAIR three years ago and was still good as gold. “That car was doing reliable low-nine-second passes, made nearly 700rwkW and consistently ran 20psi on four-bolt heads, even with 150hp worth of nitrous, so we knew the combo was solid. That engine really overpowered UNFAIR’s chassis design.” 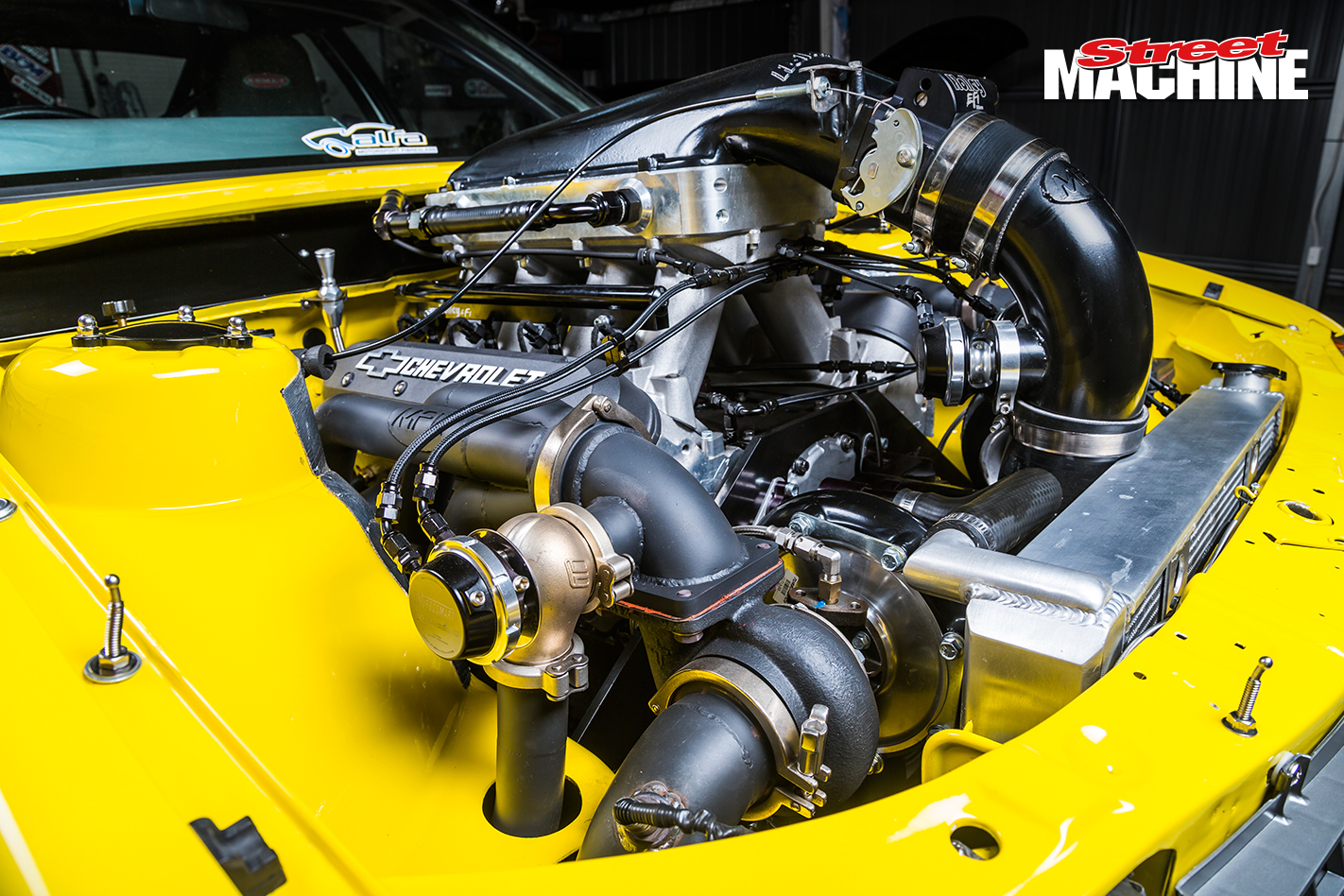 Having been a professional spanner-swinger for years Mark knows that you will save time and money by working out your combo on paper long before you start buying or assembling parts. To this end he researched every facet of his build and knew that spending time finding the right parts would pay dividends when he hit the strip. Nothing showcased this better than the effort he went to choosing the right cylinder-head castings. 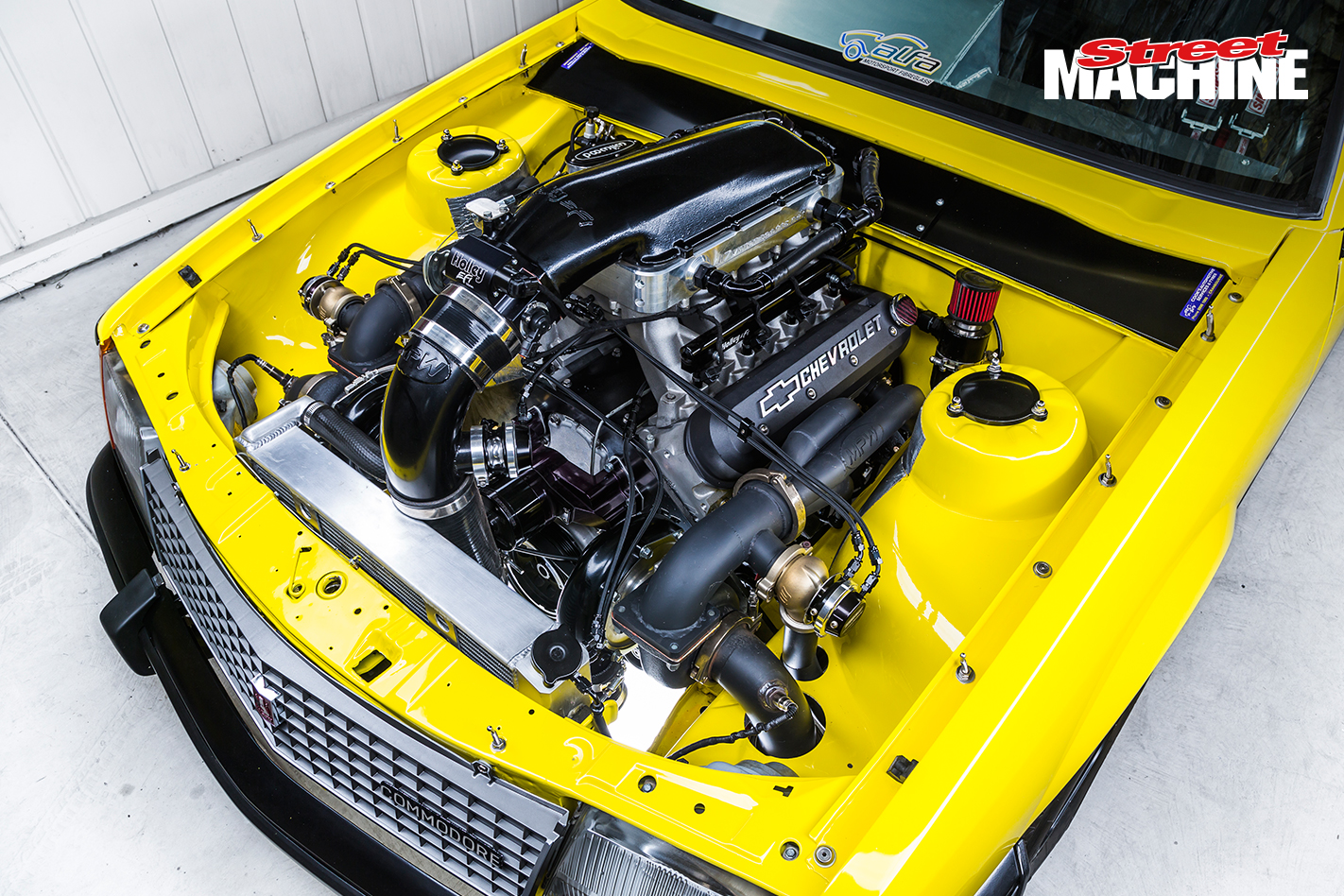 “I hunted around to find something that flowed what I needed from the factory and I looked at intake chamber volume, port volume and more. It took me six months to come up with the cam profile, cylinder-head design and compression ratio.” 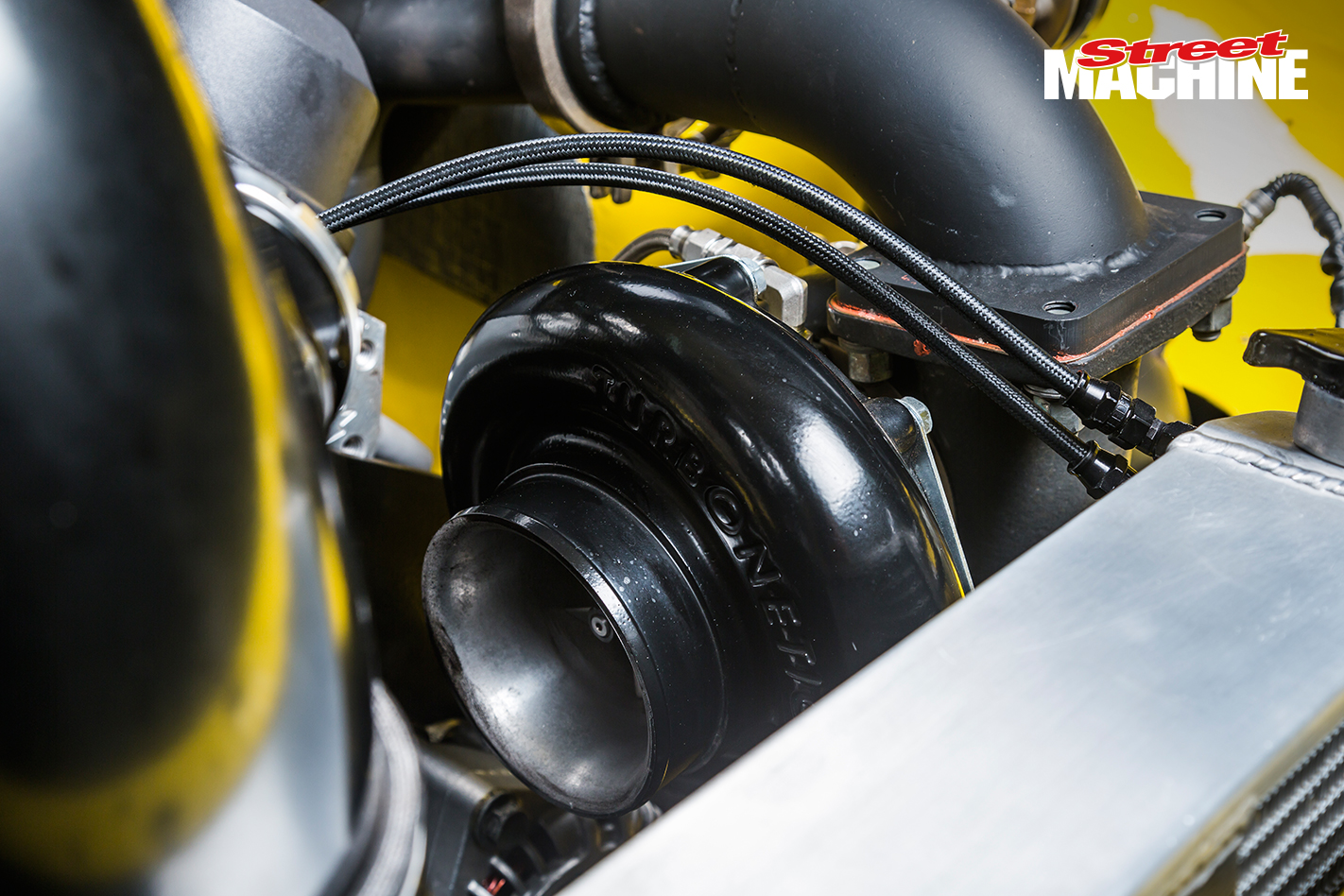 The cylinder heads are six-bolt race-style LSX units, like those units off an LSX454, but Mark reckons there’s so much work in them you may as well call them custom. “The valves are massive and you’ll struggle to buy them anywhere,” he says. “I have an awesome hook-up for them but they still cost me $220 each.” 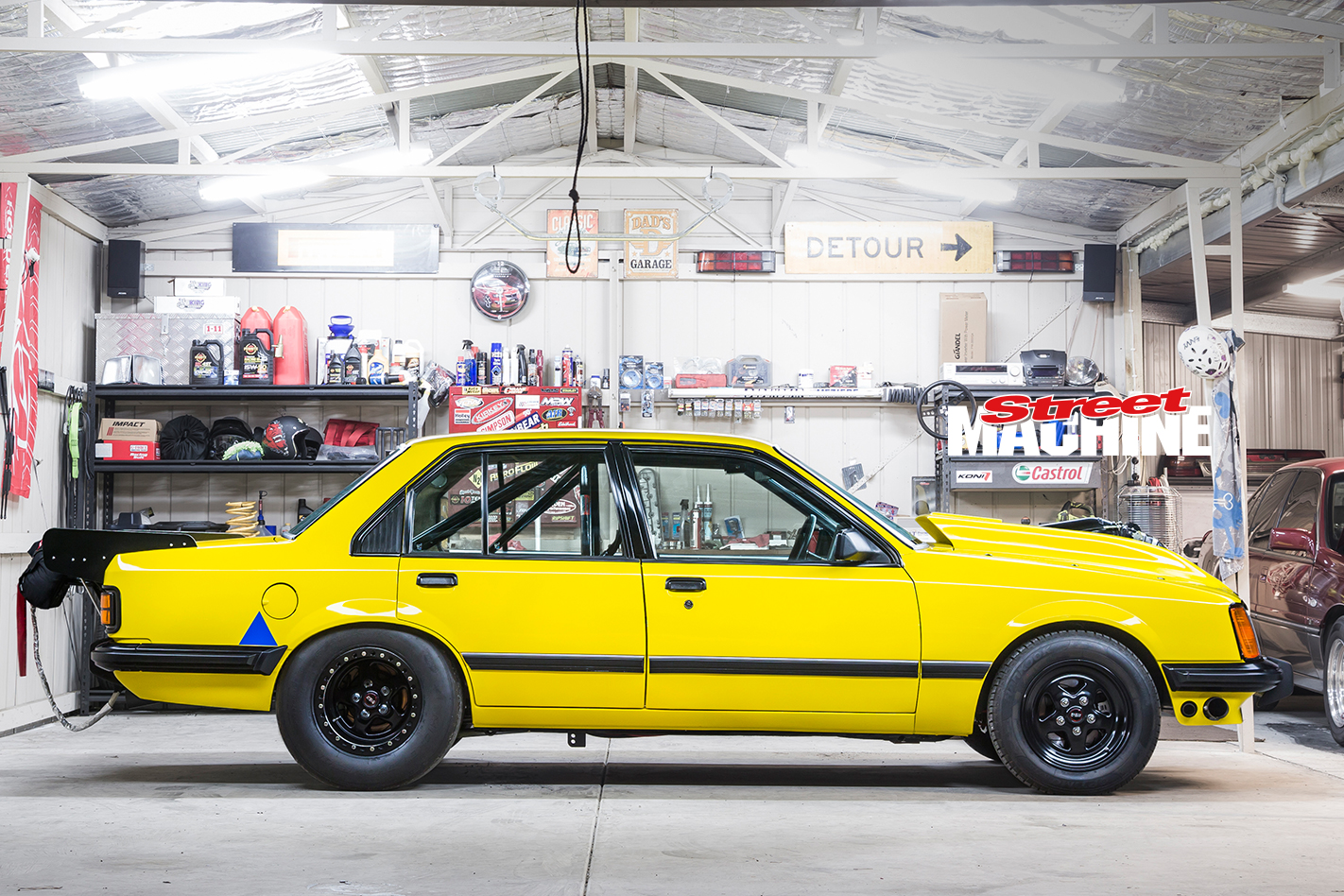 Morel tie-bar lifters handle the 427’s huge rpm, while the cam is a complete custom-grind hydraulic-roller that Mark describes as “massive”. “I didn’t want to go to a solid yet as I wanted to see what the hydraulic can do,” he explains. “And it’s definitely working well.” 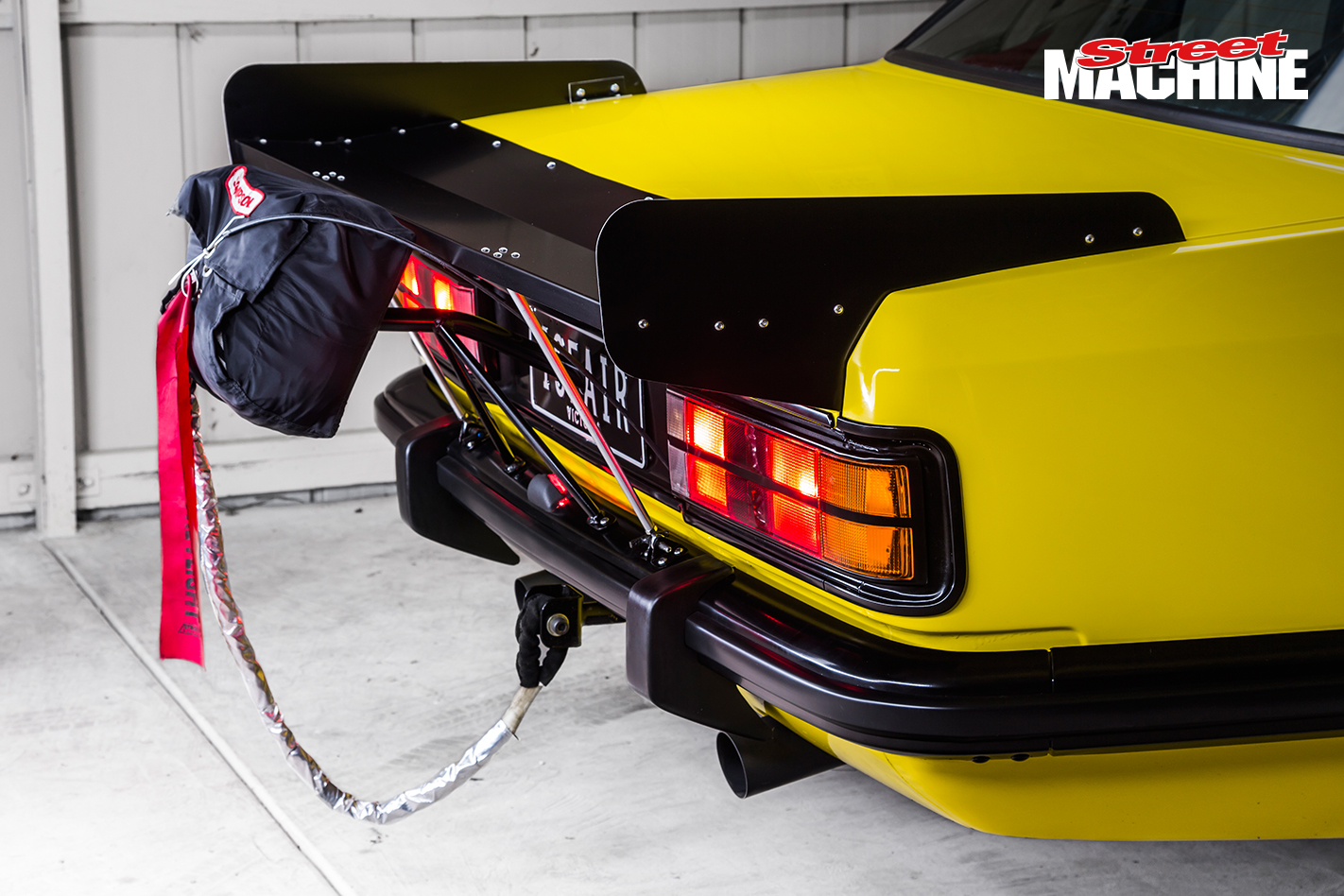 The factory LS sump was cut up to suit an early Commodore K-frame. This took some finessing because Mark mounted the engine on front and rear engine plates to get it sitting as far rear-ward as possible, having found weight displacement issues in his VP Calais drag car. “I found UNFAIR would wash around under braking, so I wanted to push the engine back in ISFAIR to make it nicer.”

Pushing the motor back in the bay also meant there was more room for the Race Radiators radiator and a pair of 75mm Turbonetics turbos, plus two 45mm Turbosmart wastegates. They’ve been mounted on a pair of MPW custom turbo manifolds with custom exhausts exiting through the front bumper to keep the plumbing simple. 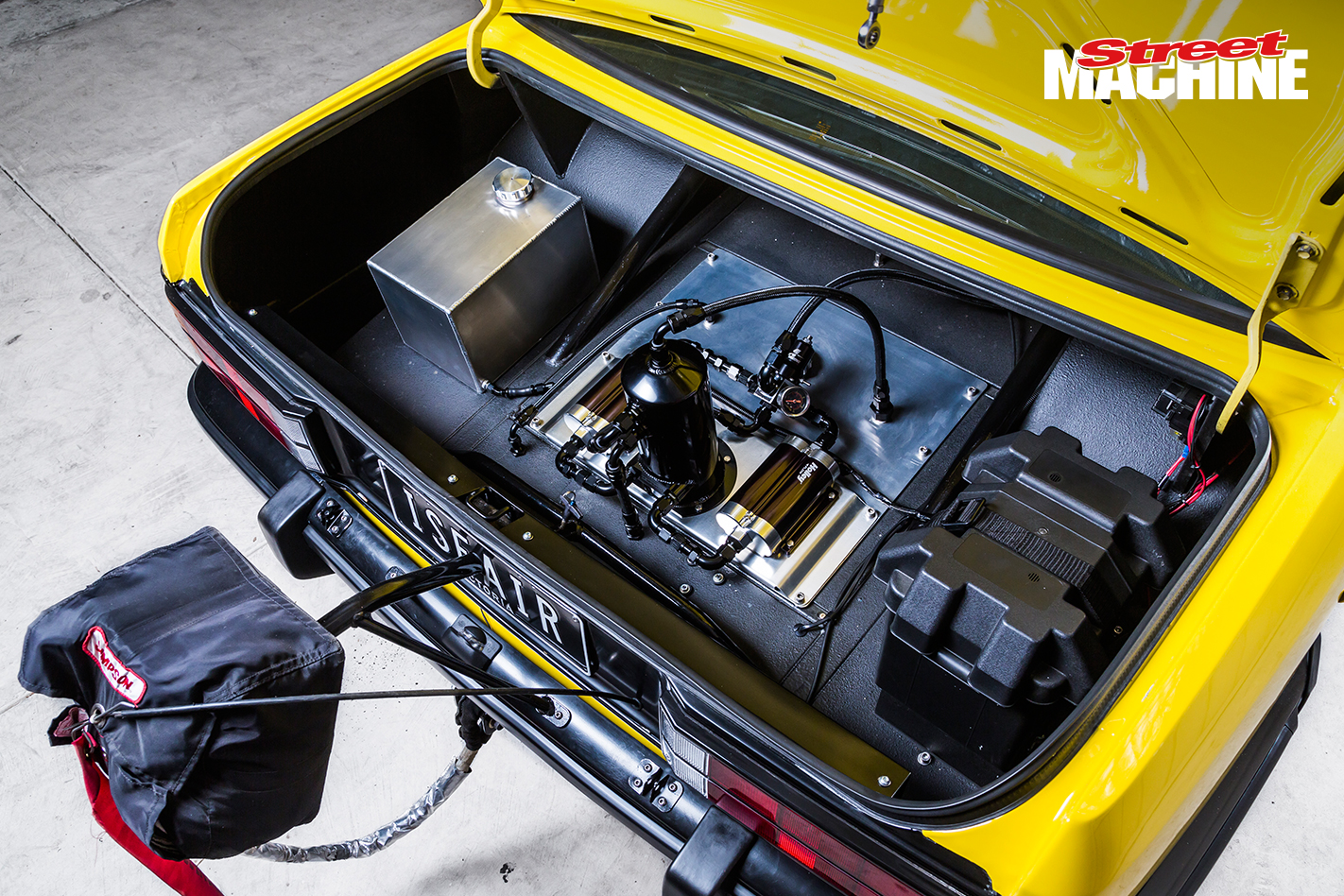 On the top of the motor the Holley high-rise intake manifold has been fitted with a plate for the water-to-air intercooler from 417 Motorsports. It circulates chilled water from an ice tank on the floor in the back to the intake, keeping the intake charge cool even on the dyno – Adam Rogash saw a peak of 60° intake temps on 17psi (low boost) while tuning ISFAIR.

Rather than straight methanol or race gas Mark’s fuel of choice is E85, fed by a pair of 1800 Holley electric fuel pumps from a custom tank, down –8 lines and into the ID2000 fuel injectors. He’s chosen a Haltech Platinum Sport 2000 with dual wide-band sensors and AMS1000 boost controller to run the whole combo and provide reams of data for logging each and every pass. 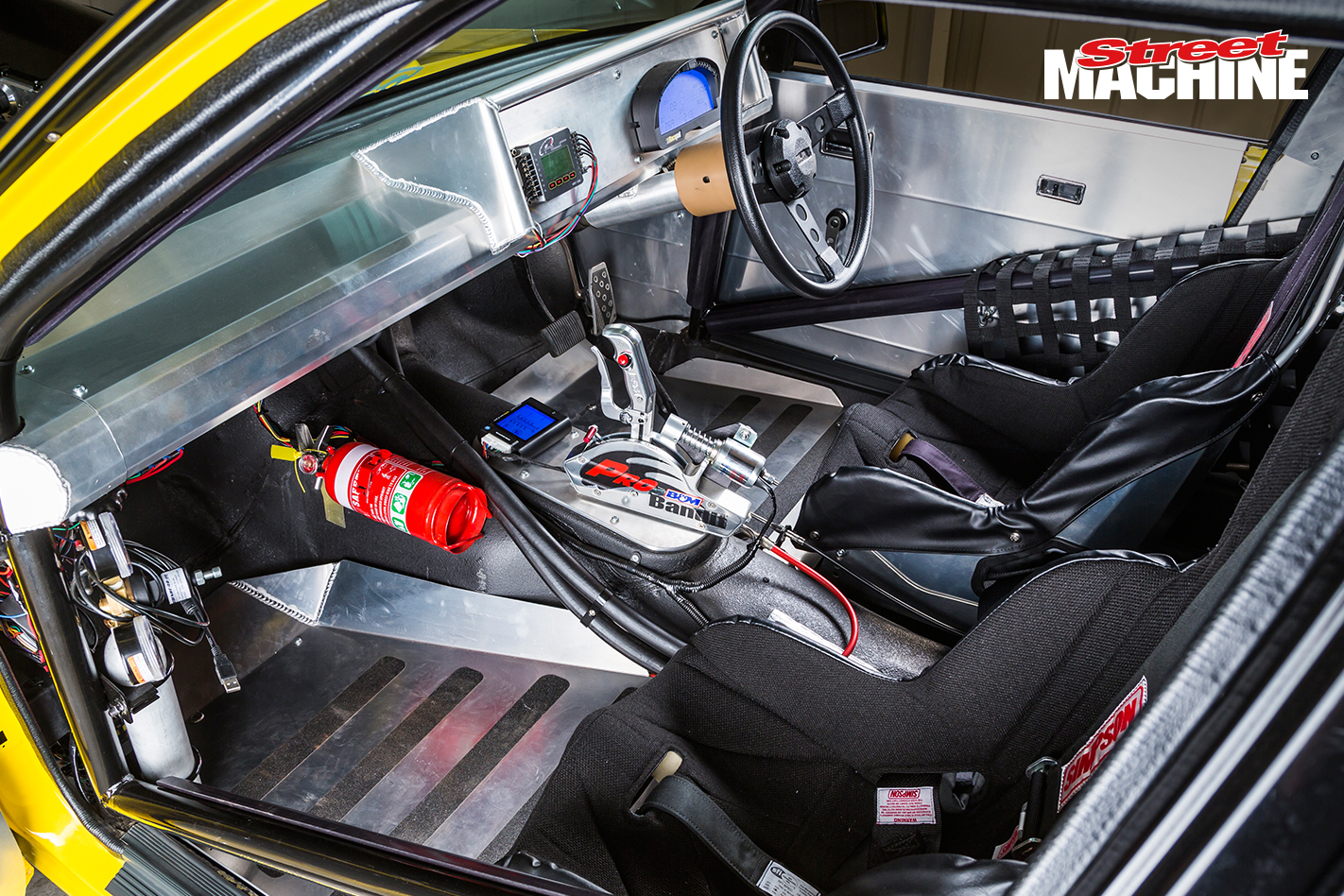 For now, the combo has made 760rwkW (1020hp in the old money) at 17psi on MPW’s chassis dyno, but that isn’t really the whole story as it pegged the single-retarder dyno, as Mark explains. “I reckon we could double that dyno figure as we didn’t really have any cylinder fill and 30psi of boost. When you look at the power curve Adam got out of the engine on 17psi, the graph is really quite mild and is showing we’re not filling the cylinders up at their optimum.” 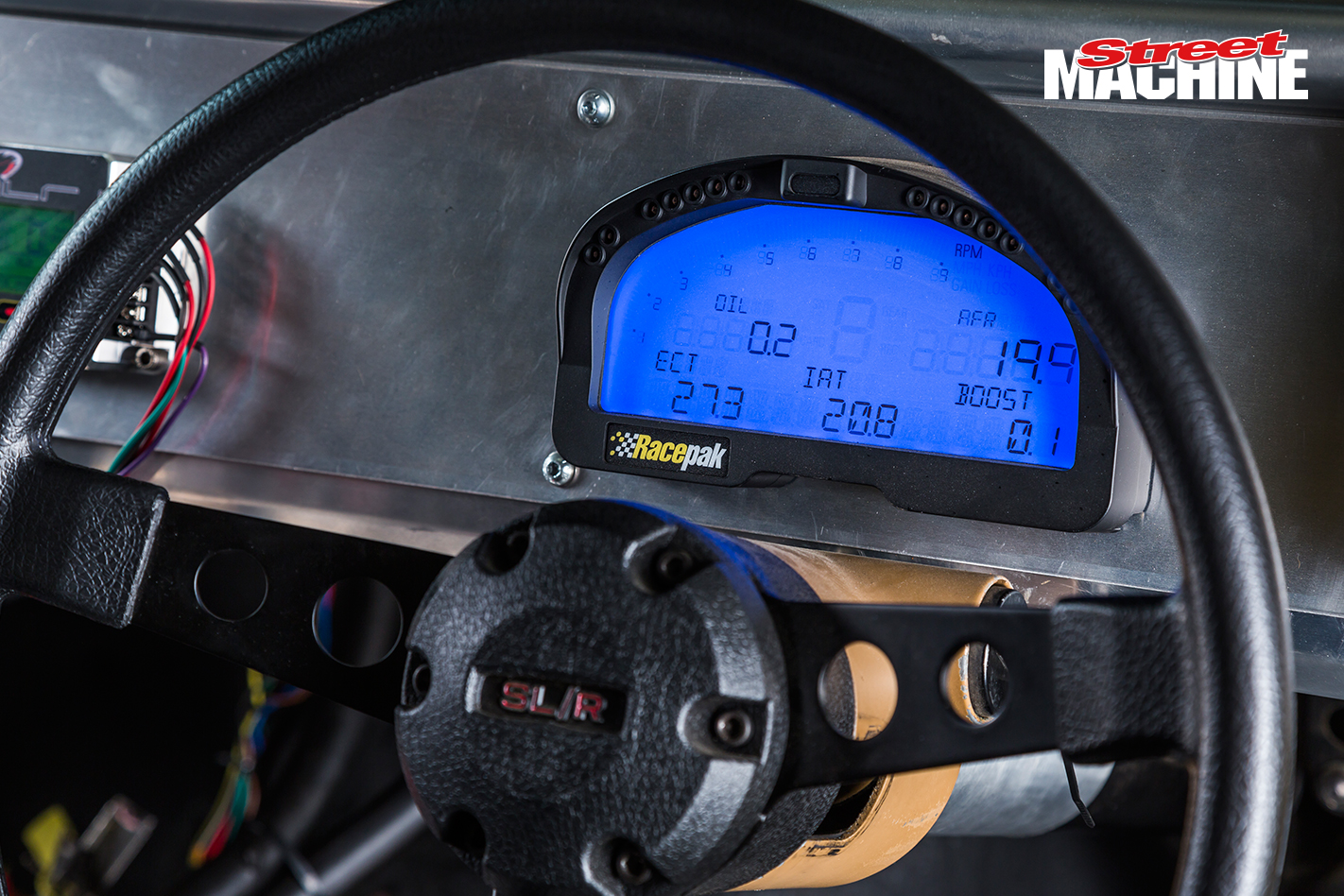 With a couple of thousand horsepower up front, a stock first-generation Commodore shell was never going to cut the mustard because, let’s face it, they were never renowned for their structural rigidity in the first place. “The guy I got the shell off is good mates with Gary down at High Performance Engines in Dandenong, and Gary was doing a four-link and four-point rollcage on it. It had been there around six or seven years, because Gary is meticulous.” 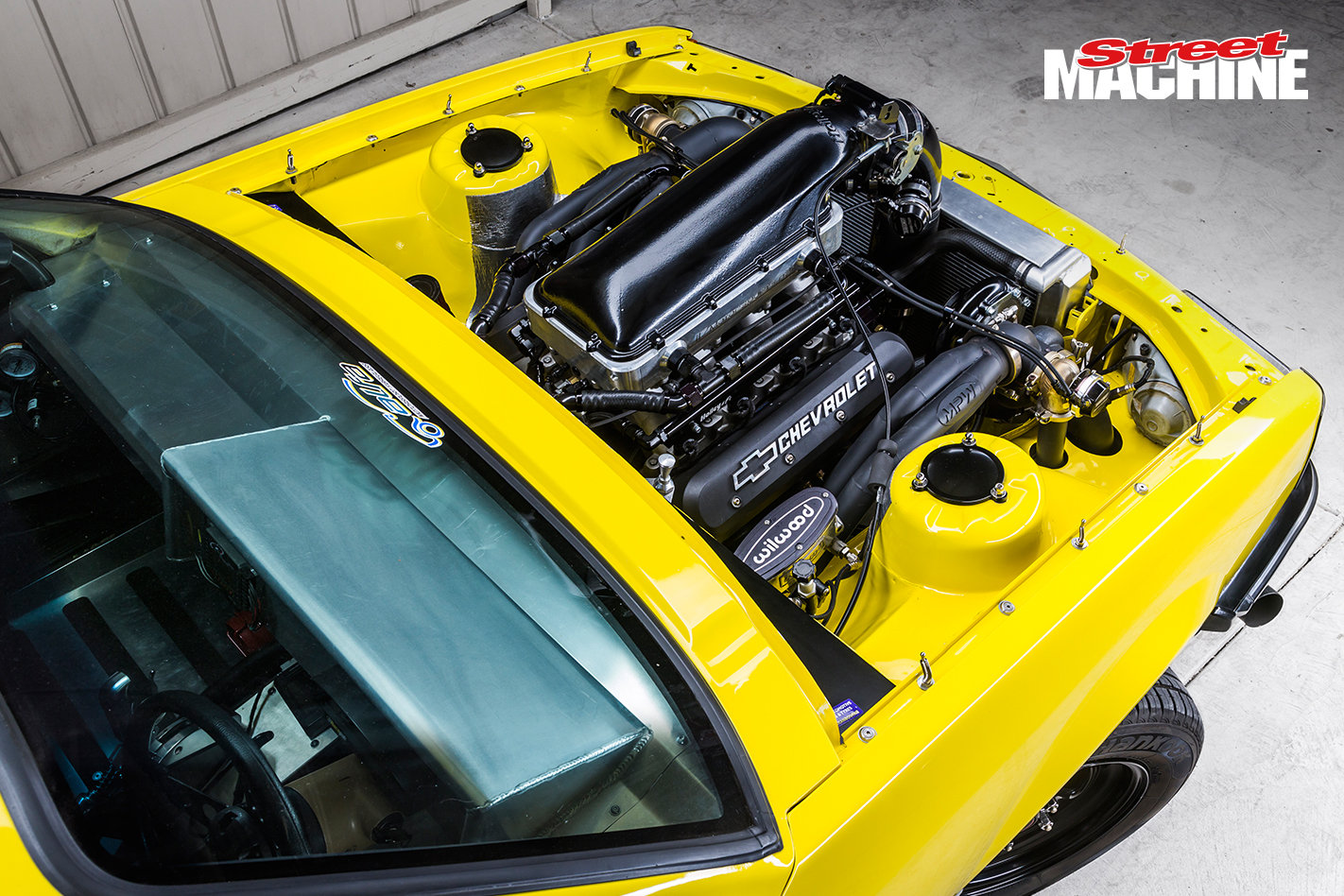 Mark got himself a cheap deal because the owner was having a financial crisis and wanted the shell to live to fight another day. “And when I say cheap, I bloody stole it,” he laughs. “I got it as a rolling shell and had Gary at HPE finish the ’cage off before I sent it to Peter at Freak Motorsport to do the dash and door cards, and then I brought it home to finish it all off.” 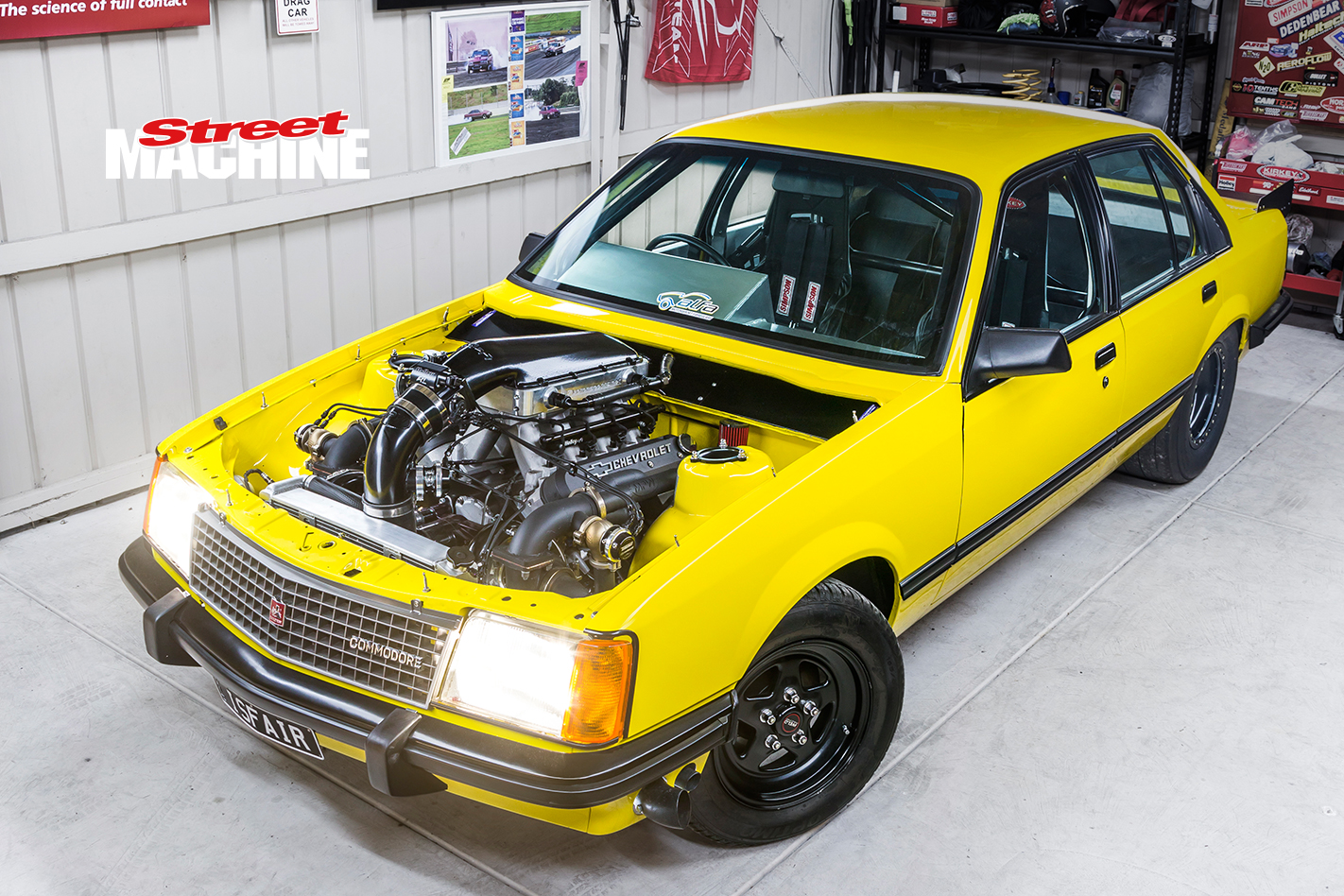 Ideally Mark wants to be in the seven-second bracket, but is aiming for 8.50 to start with. Once the boys have got ISFAIR down to 1.2 60ft times they will wind 30psi worth of boost into the 427 and see what she can really do. Given ISFAIR ran a very loose 9.4@135mph half-track pass at Heathcote recently, this is looking like it’ll be a sooner-rather-than-later affair. We reckon Mark’s competitors will be queuing up to get those UNFAIR number plates off him.

THANKS
Adam Rogash from MPW for the perfect exhaust manifolds and dyno time tuning it; TCE Torque Convertors; Gary from HPE for the fab work on the car; Peter at Freak Motorsport for the interior; Scotty from Scotty’s Restos for the paint and panel; Alfa Fibreglass for the bonnet; Sean at Top Torque Engines for the machine work and bottom-end assembly; the boys at Cooks Auto for their help and John Lang for suspension advice and assistance; and thanks to all my mates who have helped me out. Also, a very special thanks to Dylan and Katrina Aldington for all their support and help during the build