IN THE United States, heavy-duty pick-up trucks are a staple of land speed racing events at places like Bonneville and El Mirage. Usually sporting a plank of wood on the front and enough tools in the tray to service a taxi fleet, their grunt and size make them perfect push cars to give sleek, high-geared race cars a kick in the bum and get them on their way.

So the sight of a push truck being pushed by an even bigger truck will raise a few eyebrows. And then when you see it in the impound lot being inspected after breaking a land speed record, those eyebrows damn near fall off. 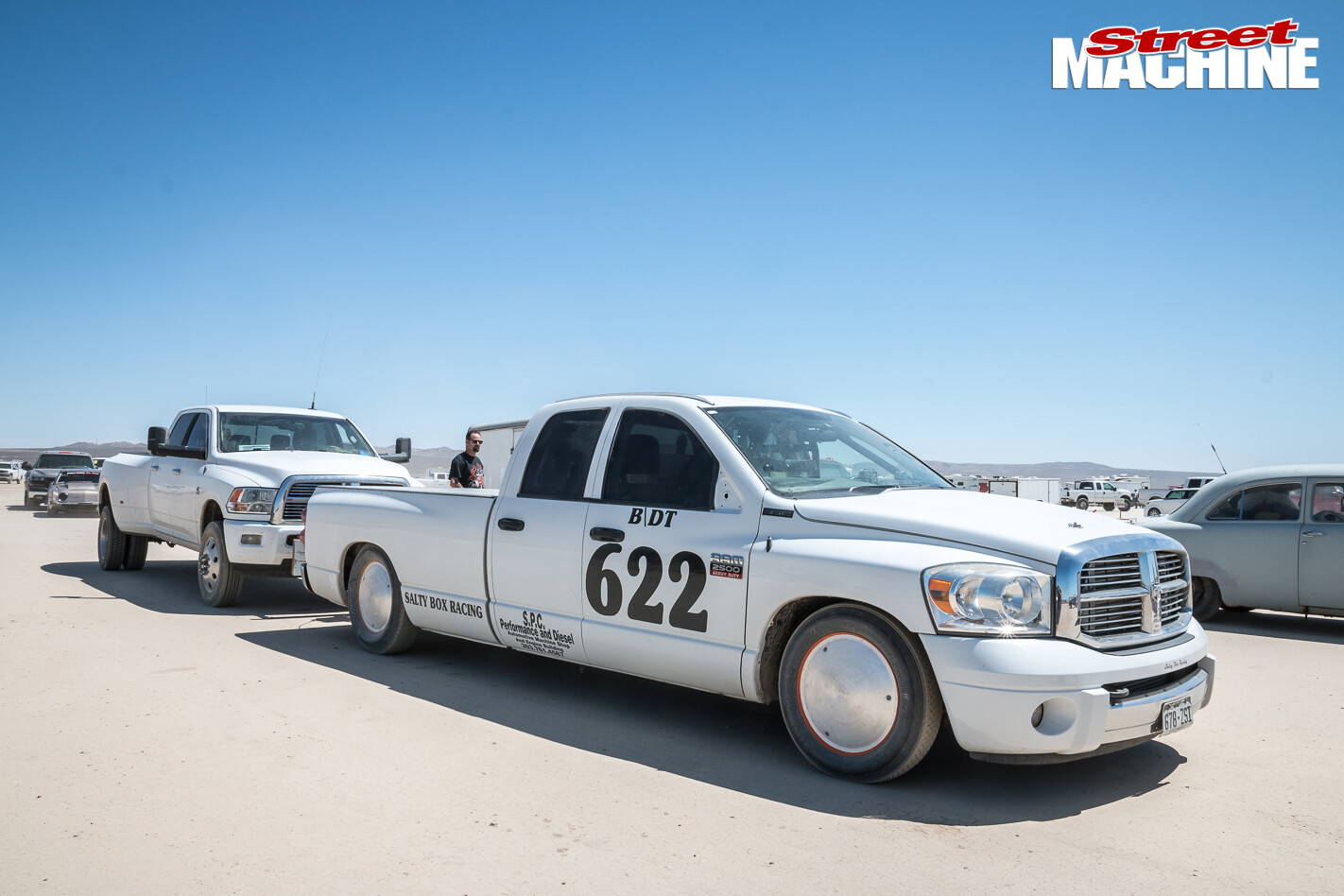 This once-pedestrian Dodge Ram 2500 Heavy Duty has had an overhaul at the hands of Newcastle, England expat and long-time racer Tim Boyle of the Salty Box Racing team, along with crew member Adam Rogers. It was at El Mirage for the May land speed meet, and kicked off the team’s racing season in style by smashing their own class record with 190.8mph pass on the dry lake. That’s not the only record this Dodge holds; it can also file away the Bonneville record at 190.1mph (Bonneville World of Speed, 2014) and a standing-mile PB of 192mph (Colorado Mile). 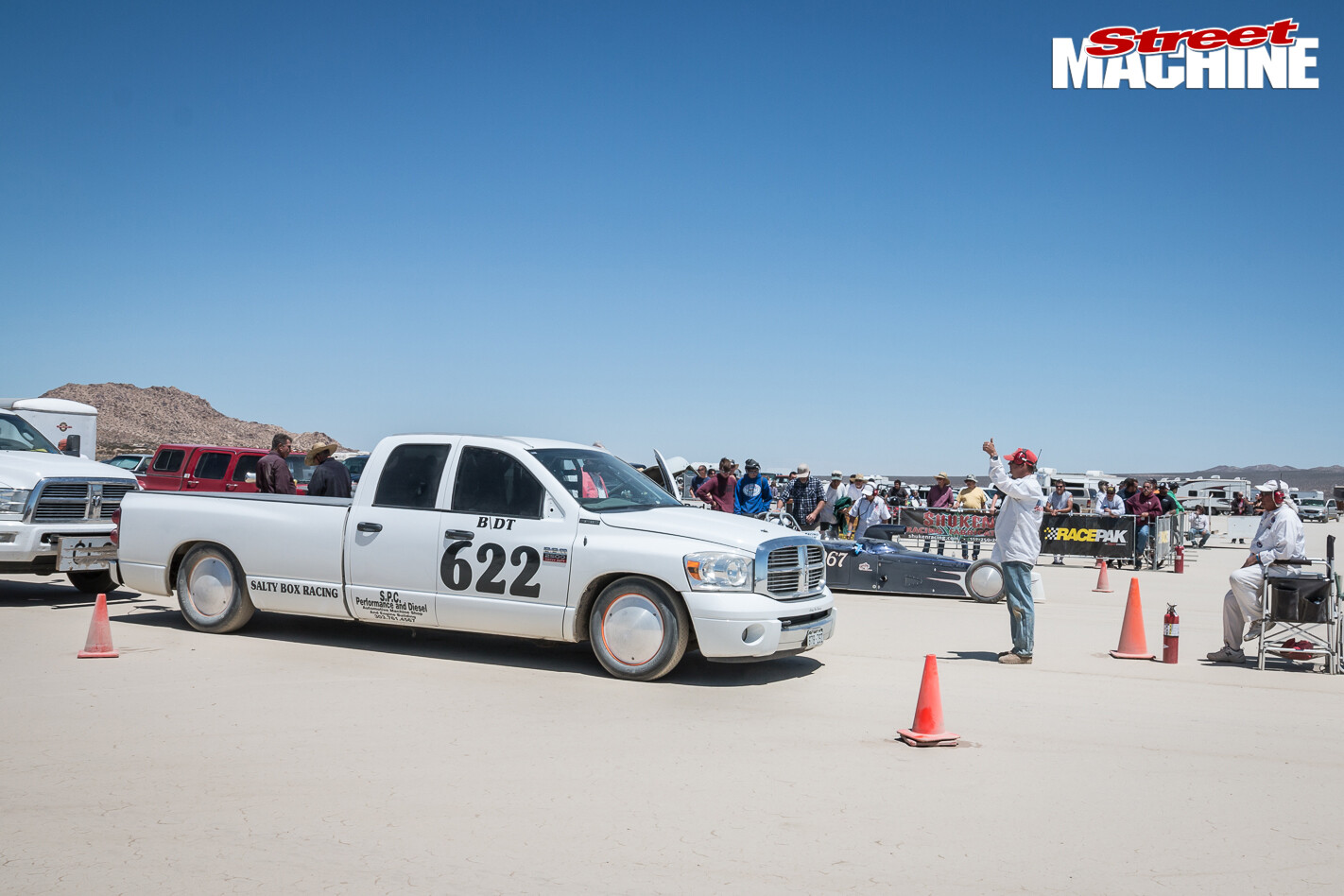 Oh, and Tim often takes it to get groceries back home in Glenwood Springs, Colorado. “Oh aye, I don’t even detune it. I get some great looks at the shopping mall!” he laughed in his strong Geordie accent. “I pick my son up from school in it too; he absolutely loves this thing!” 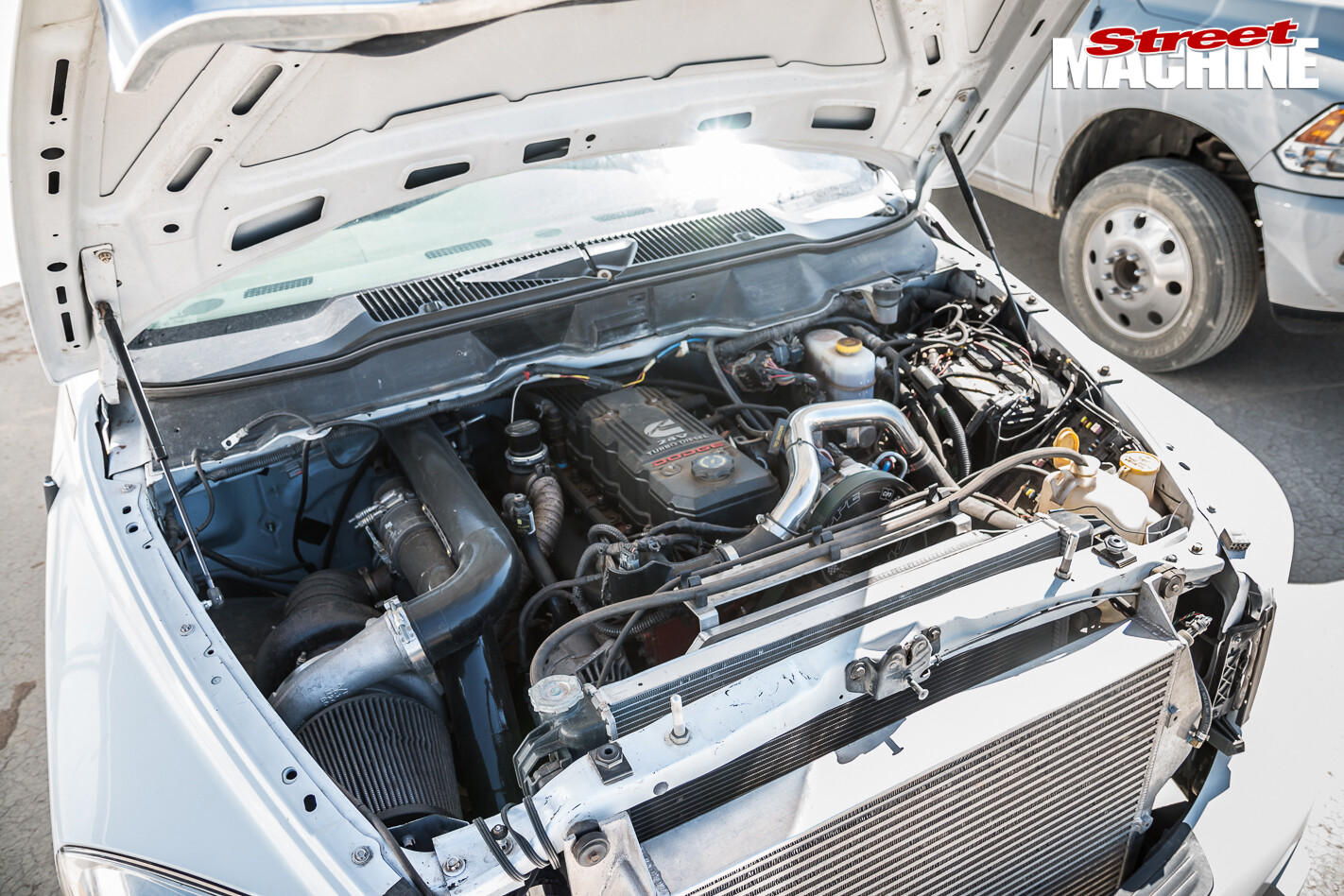 So let’s talk numbers: this thing puts out 1115hp and 2528Nm of diesel fury from its Cummins 24V twin-turbo Dodge V8. That’s more pulling power than five LS1s combined. These astronomical numbers are mostly thanks to a 96mm Garrett GTX turbo plumbed inline with another 78mm Garrett GTX and wound up to 95psi. Sean Cleary at SPC Performance & Diesel screwed together a standard block without too much magic inside – it’s got a 20thou bore, billet connecting rods and ported and polished heads with 2mm-oversized valves. Two high-flow fuel pumps are needed to keep it drinking at top speed and revs, while ECM wizard Ryan Milliken from Hardway Performance makes sure the computers play friendly. Getting the 7500lb beast to behave on the lake bed is a little trickier than bolting on a spoiler and going for it. In fact, no aero components are allowed in the B/DT class, other than an air dam at the front to help with wind displacement underneath the car. But Tim said he’d fitted one previously and it made no appreciable difference. “Dodge spent a lot of time and effort to design these newer aerodynamic bumpers, so what’s my flat air dam going to do better?” he reasoned. Instead, Tim has come up with his own solutions to the unique set of problems posed by a road-registered dry lakes race car shaped like a rectangle with no weight over the drive wheels. 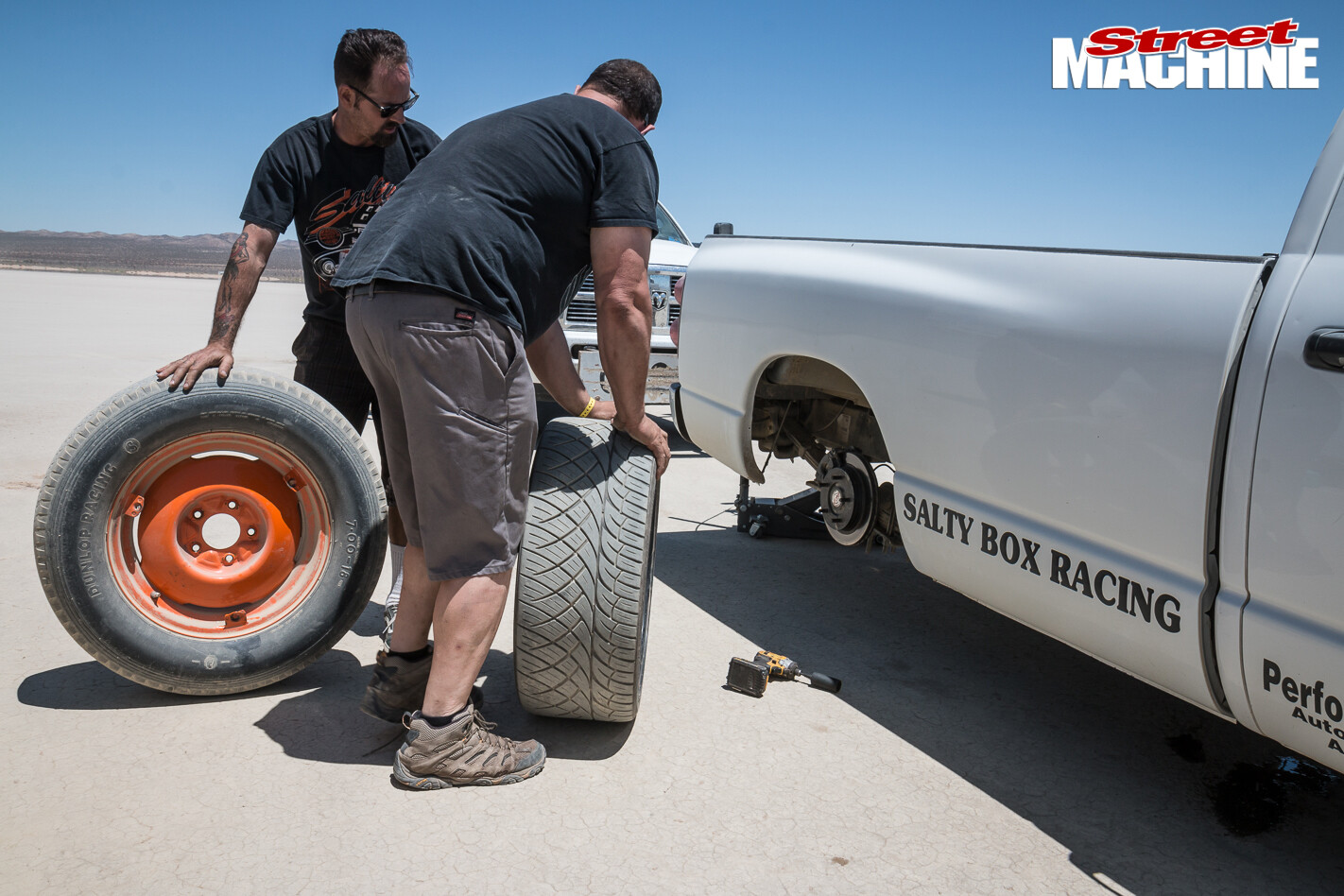 To make sure the power gets down on the ground, there’s a 1000lb water tank in the back of the tray, and the only real streamlining is lowered suspension and the removal of the side mirrors. A set of 18-inch steel wheels with spun Moon caps and special Dunlop land speed racing tyres are fitted in place of Tim’s usual set of Dodge SRT streeters. They’re thinner and have a much rounder cross-section, ideal for the incredible rotating forces they’ll experience travelling upwards of 190mph (305km/h). 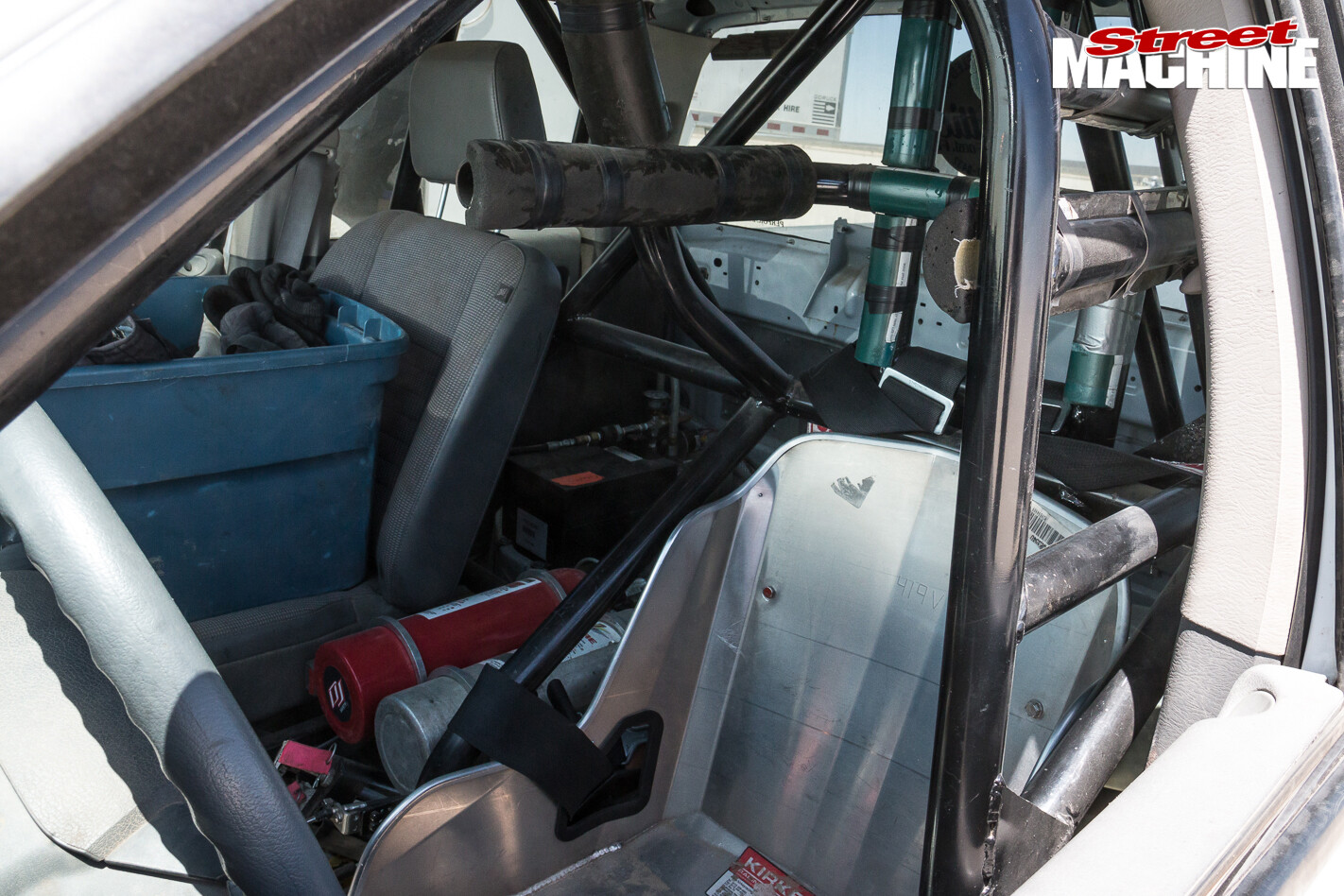 At such high speeds, safety is also incredibly important – something both Tim and Adam know very well. They’ve both been SCTA/BNI tech inspectors for ages and know their way around making sure folks can walk away from hairy incidents. The Dodge’s rollcage is a complete cell that continues under the chassis, around the sub-frame and through the tray, as opposed to a more common weld-in unit. It forms part of the car and can’t be removed for when the truck’s sitting in Colorado traffic. After packing the parachute, warming up the car, changing into his go-fast suit, helmet, arm restraints and HANS device, Tim was ready for racing. With a few puffs of smoke and the whine of those huge turbos spooling up, Tim could start down the 1.3-mile straight course at El Mirage to hit the first timing light as fast as possible. The trademark black smoke billowing from the exhaust is referred to as ‘rolling coal’ by the Yankees, and as cool as it may look, when it comes to performance diesel racing, the less the better. More smoke means less oxygen is being burnt up in the engine and therefore not running as efficiently. 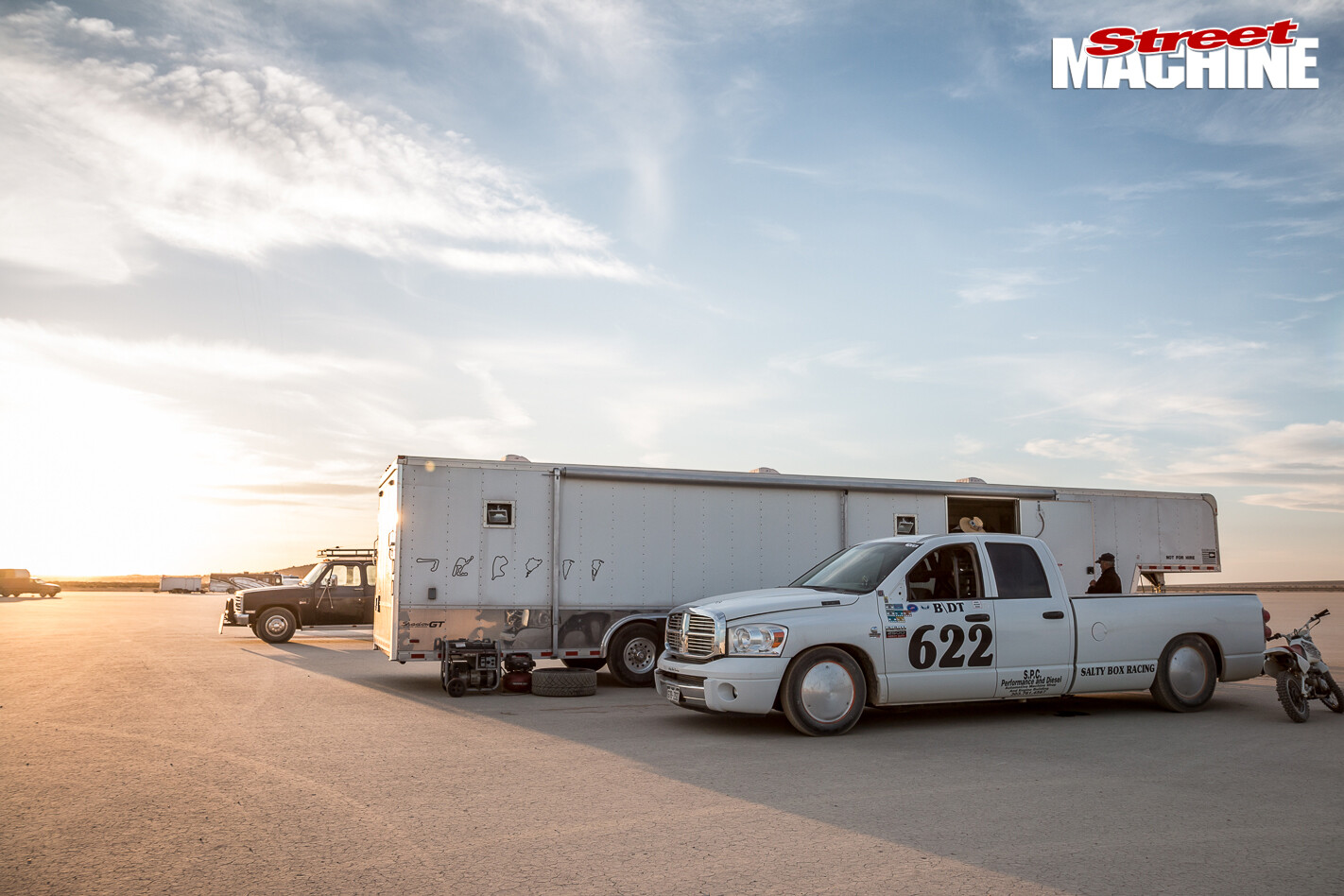 Saturday’s pass might have been a record 190.8mph, but Tim believed there was far more in it for Sunday. “It was burning up great,” he said. “That was on a softer tune, so I’ll ramp it up and change the diff gears and maybe we can do it.” Only one sleep would be needed to see if the Salty Box would be able to take home one of motorsport’s most coveted clothing accessories – a 200mph Club hat. 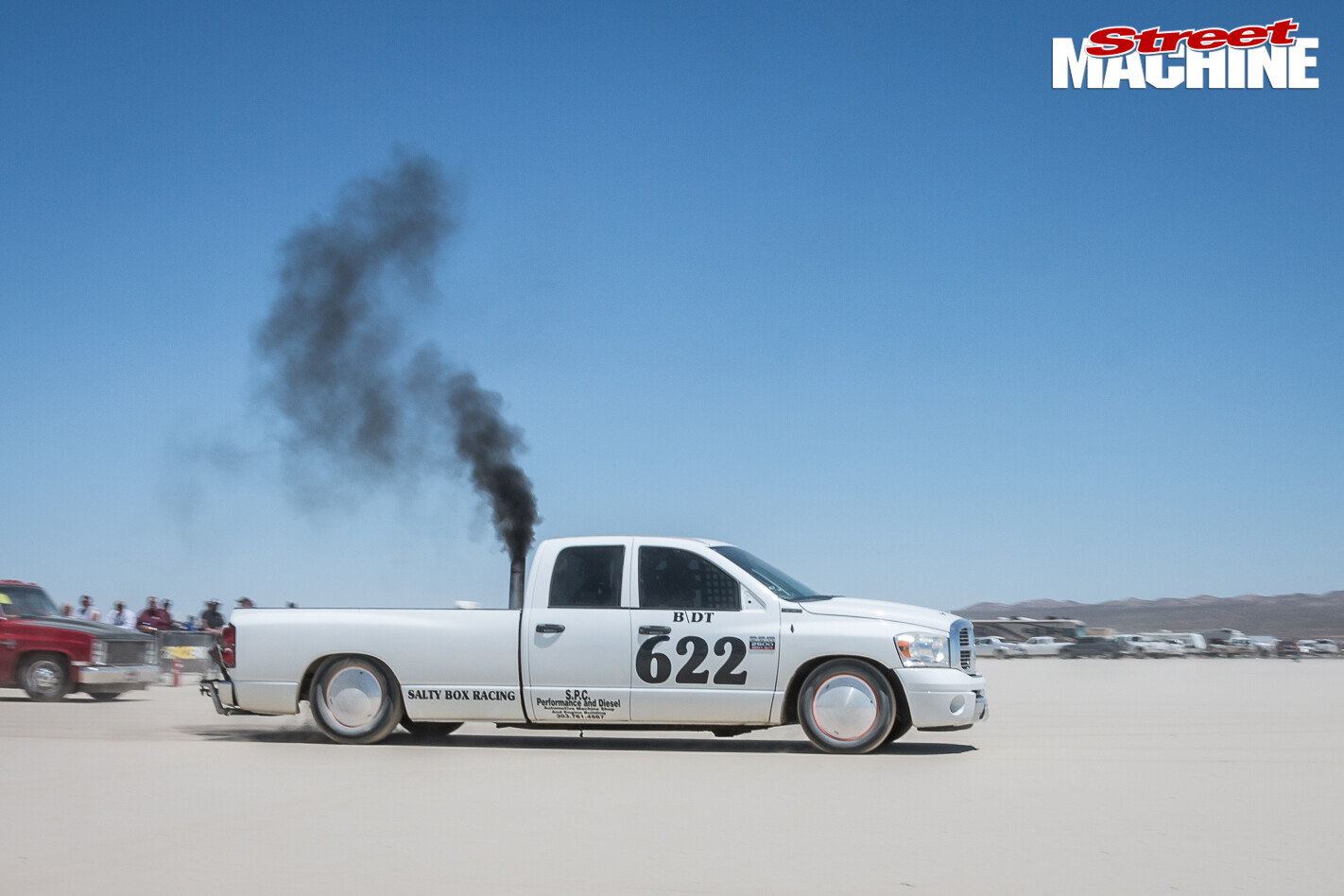 Turning up the dial on the tune and running through the race prep, all signs were pointing to Tim driving home with a new hat shading his eyes, but it didn’t go exactly how he’d planned. “I was in fifth, about to grab sixth, and all the sudden: CRRAAASHH! KRRRR! BAANNGGG! I lost all power. The tranny blew into smithereens.” With no visible damage, it would be a matter of forensic surgery to see exactly what failed. “I’m just glad this didn’t happen at Bonneville. You’re screwed if something breaks there,” Tim said. “I’m also glad I pulled it on the trailer here. I’ve driven it to races before but thankfully always made it home in one piece.”

With racing done for the weekend, it was a matter of changing wheels, packing up and hauling back to Colorado to repair the damage in hopes of squeezing an extra 10mph out of the car and another chance at joining the 200mph Club later this year. “Oh aye, it was a great run though,” Tim said of Sunday’s pass. “I was already reaching shifting points earlier than yesterday and the car felt really strong.”

And it wasn’t all in vain – the team broke the B/DT class record on their first pass of the season, after all. Going over 300km/h alone is a massive feat in a 7500lb box on wheels, and Tim can drive it around town as soon as the gearbox is put back together. There aren’t too many people in the world knocking on the 200mph Club’s door in a truck, let alone one that ferries kids around and pops down to the corner store for some milk.

Having seen it in action, I’d bet my last pint of Newcastle Brown that the Salty Box will soon earn Tim Boyle a new hat.