RODNEY Waters has always been a burnout man. When he’s not wheeling and dealing on his range of Badboy Mowers, he’s in the shed scheming up ways of building a smoother burnout car. Aside from his stunning HQ, other toys in his collection earmarked for tyre torture include a blown LJ Torana (currently copping 20-inch rims and a freshen-up) and a Datsun 200B with a V8. 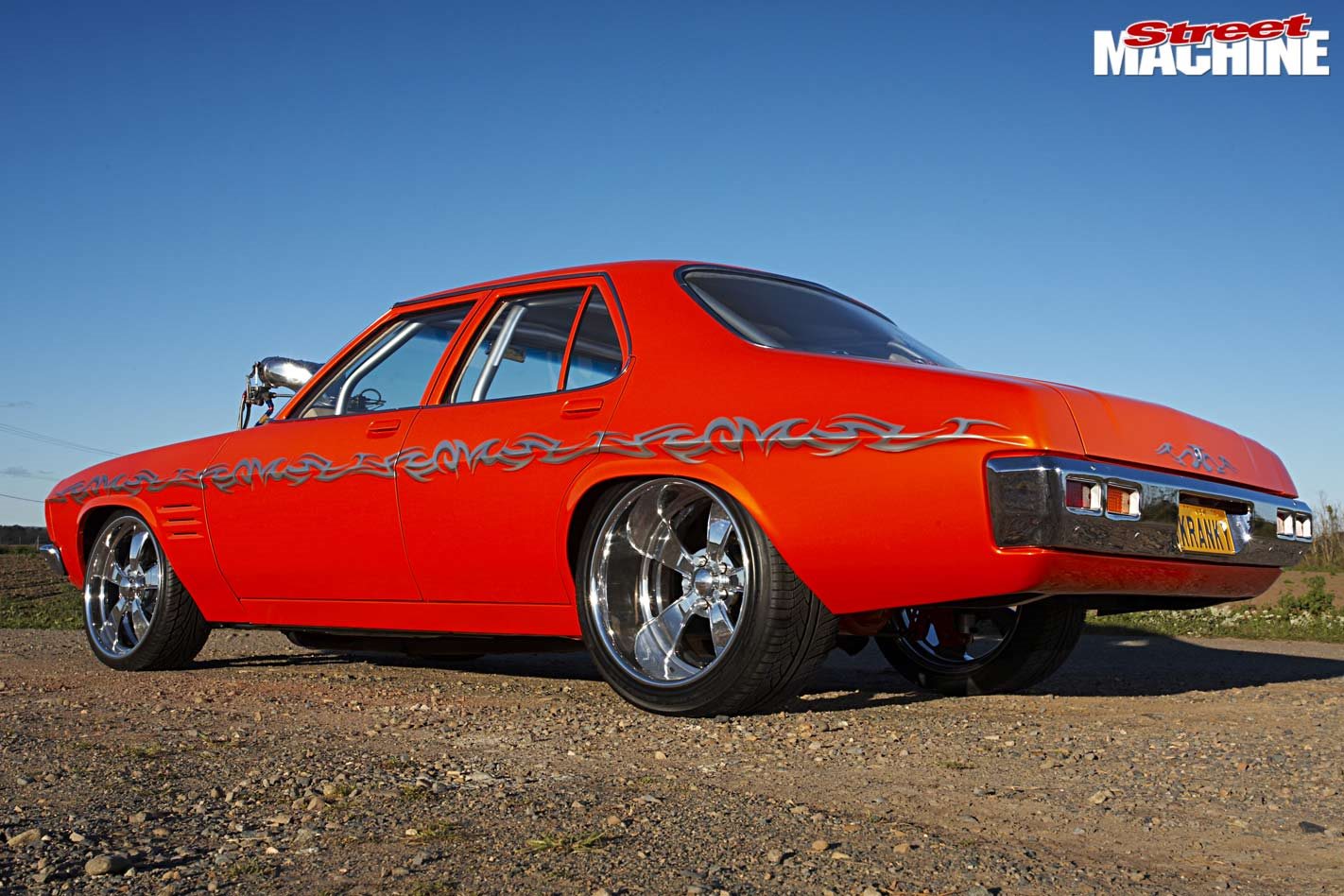 This HQ isn’t a new car — it’s just had its third rebuild in six years. In its first incarnation, it had a blown small-block Chev and was all but written-off on a late-night test drive the night before its first show appearance.

A year later the rebuilt car hit the scene with the plates 1/4 MILE (SM, May ’02) and was campaigned mainly in the burnout arena, with a 6/71 blower and twin carbs on a mild 350 Chev.

Read next: KRANKY's 515-cube big-block Chev engine on the dyno 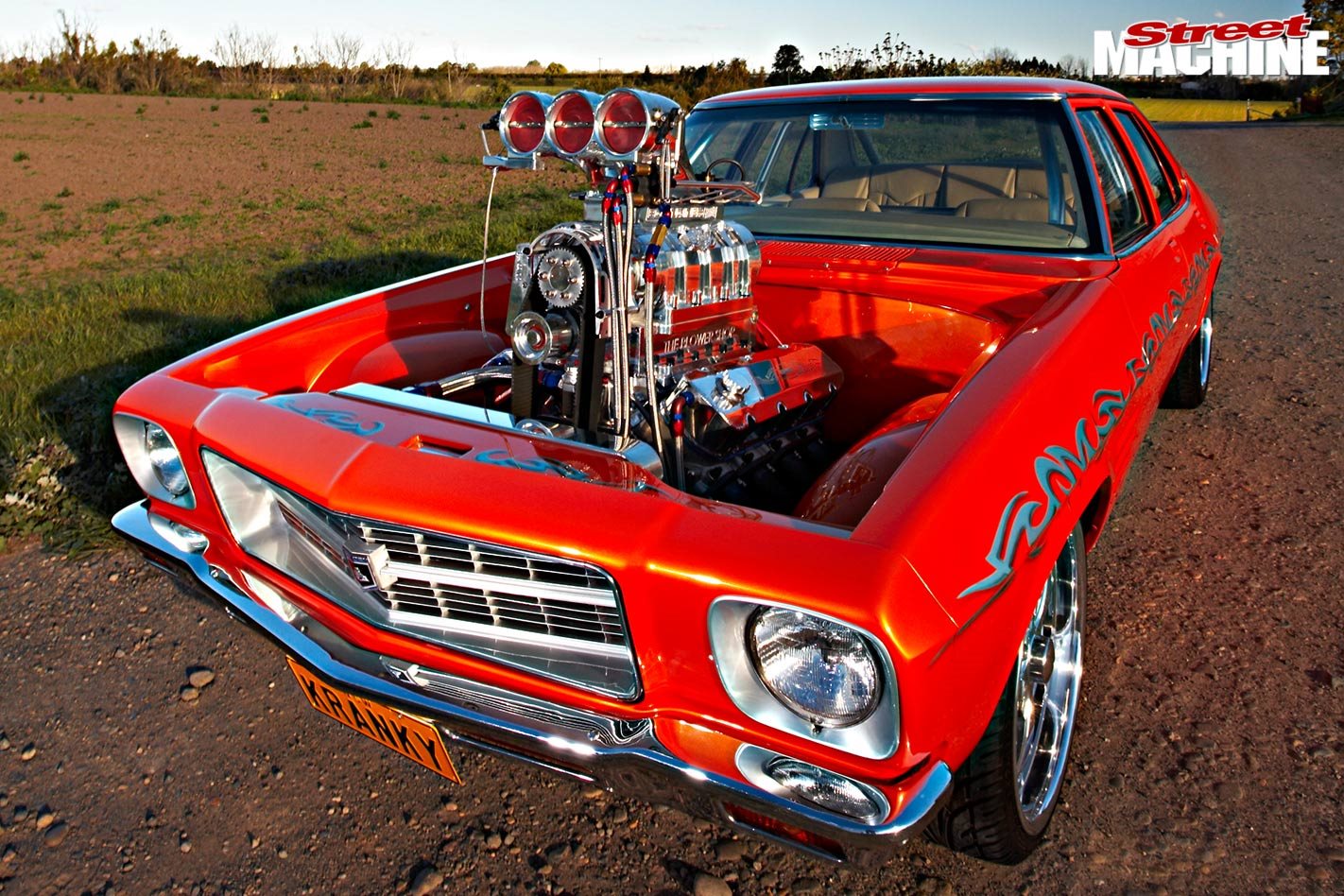 “After a few years of banging tyres, the car was getting tired and I was thinking of an extreme makeover,” Rodney says. “I wanted to step up to a bigger motor, bigger wheels and four-link rear end so I could race it if I wanted to; something I could thrash hard and not care if I broke it.”

Over a two-year period the car was totally stripped and a back-half chassis was fitted. Since he was already shipping a lot of parts from the United States for his mower business, it made sense to piece together the ingredients for a wicked combination from American suppliers. 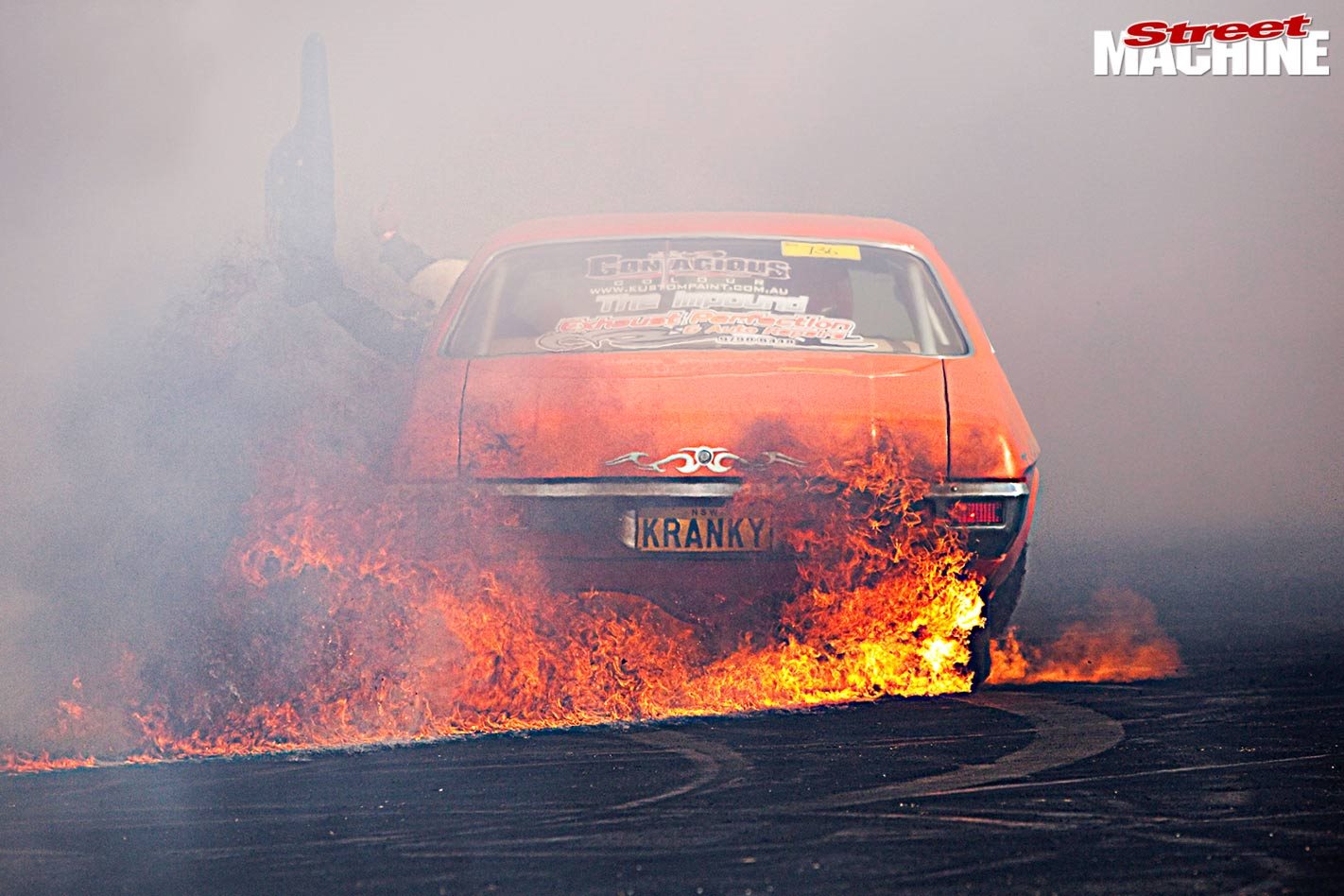 The engine looks killer — and is, in all respects. Mick and Mal from BG Race Engines in North Richmond, Sydney, were given the nod to screw something tough together that could handle serious donut and drag duties. 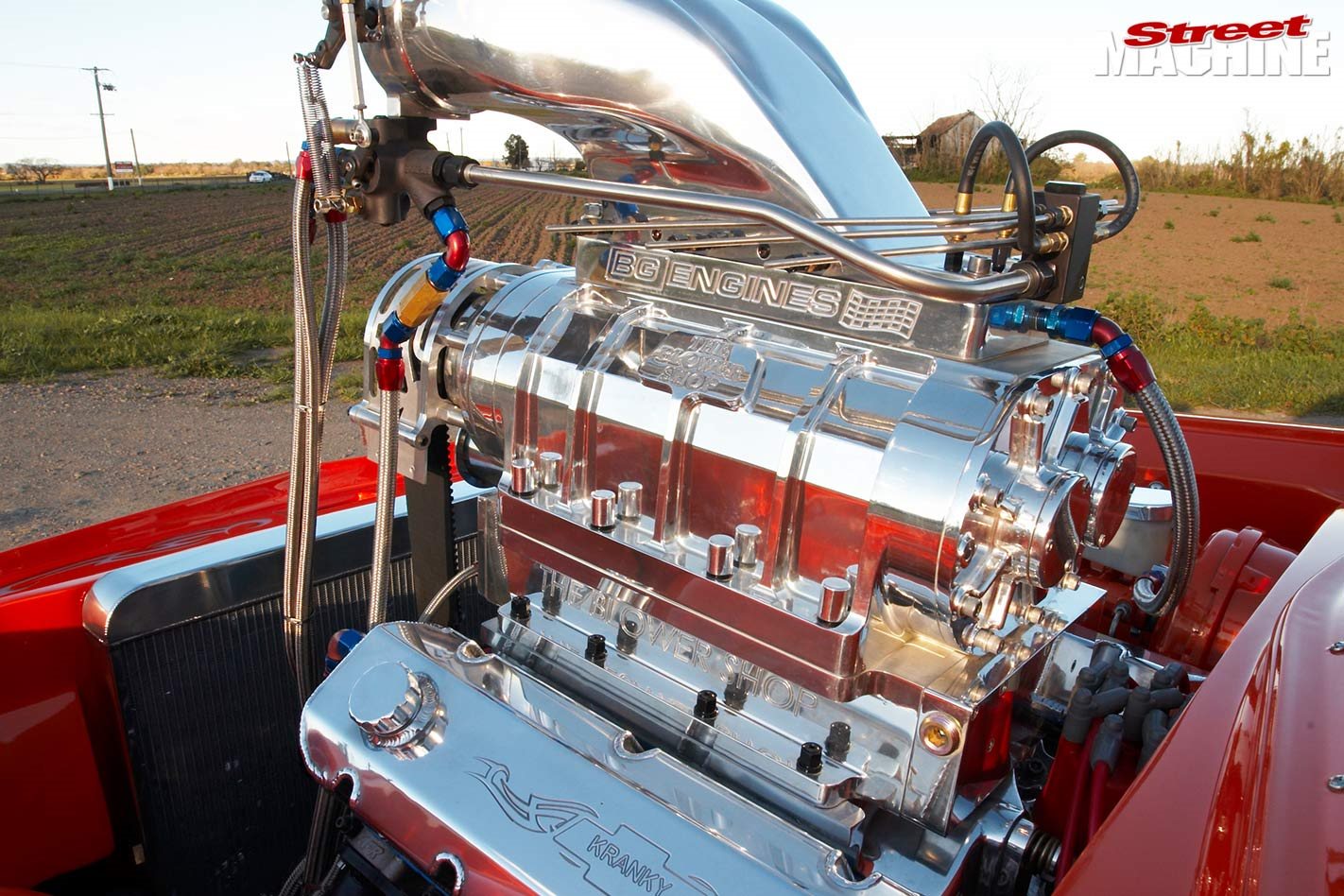 The 510ci big-block Chev not only had to look like a mountain of polished attitude but had to make the numbers to pull off quarter-mile powerskids and smoke the tyres at any speed, at the drop of a hat.

Like any blown combination, the bottom end needed to be bulletproof and this deal is as good as it gets for a big-block Chev: Merlin block, steel crank, Oliver rods and CP forged blower pistons. 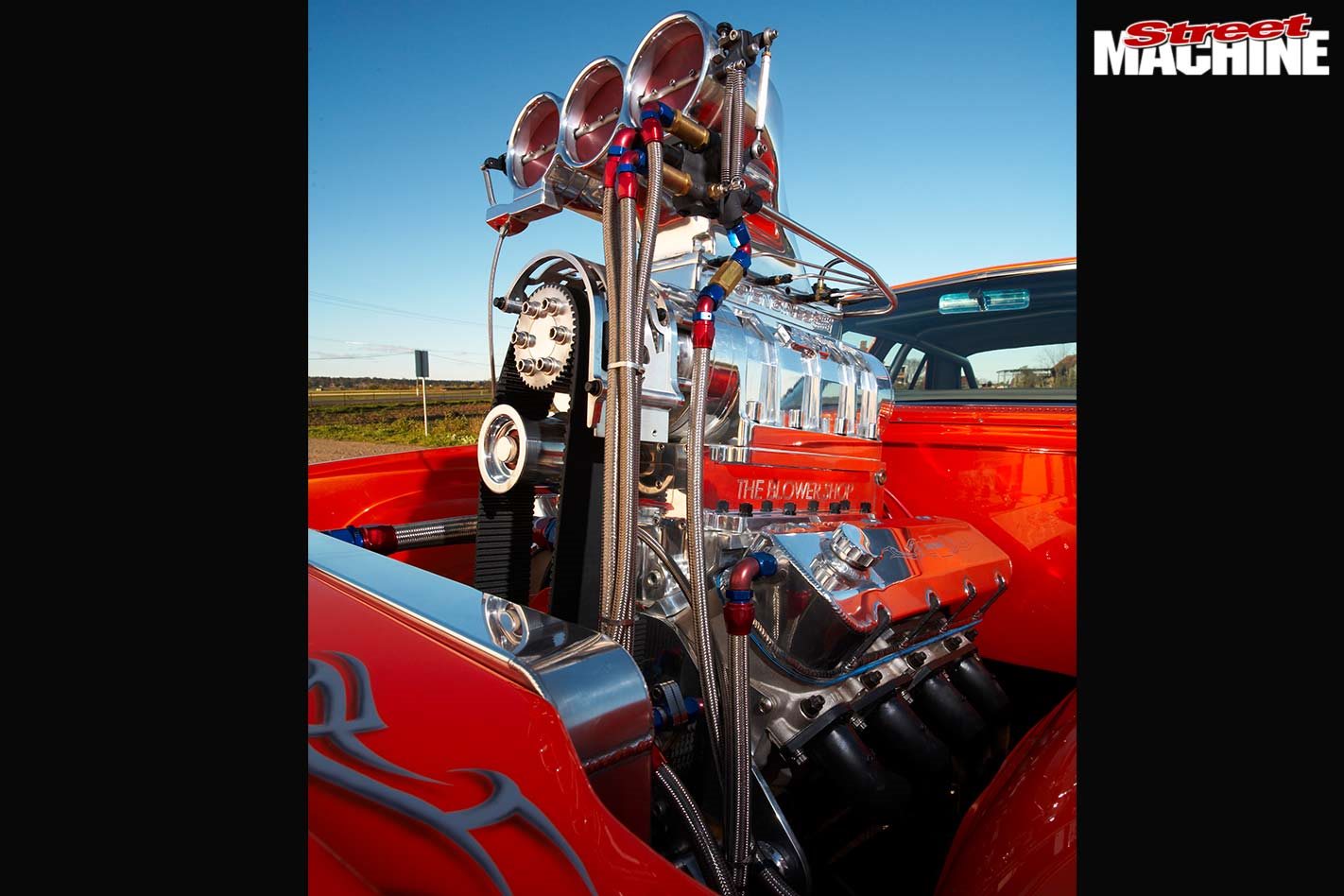 The 8/71-blown 510ci rat motor is good for 1272hp on the dyno. The bonnet? You don’t need one when your engine bay looks this good

The camshaft is a custom-ground solid roller by BG and heads are CNC-ported AFRs. The motor is studded throughout and topped with a polished Blower Shop billet-cased 8/71 fed by an Enderle Big & Ugly mechanical injector and 110 Enderle mechanical fuel pump. 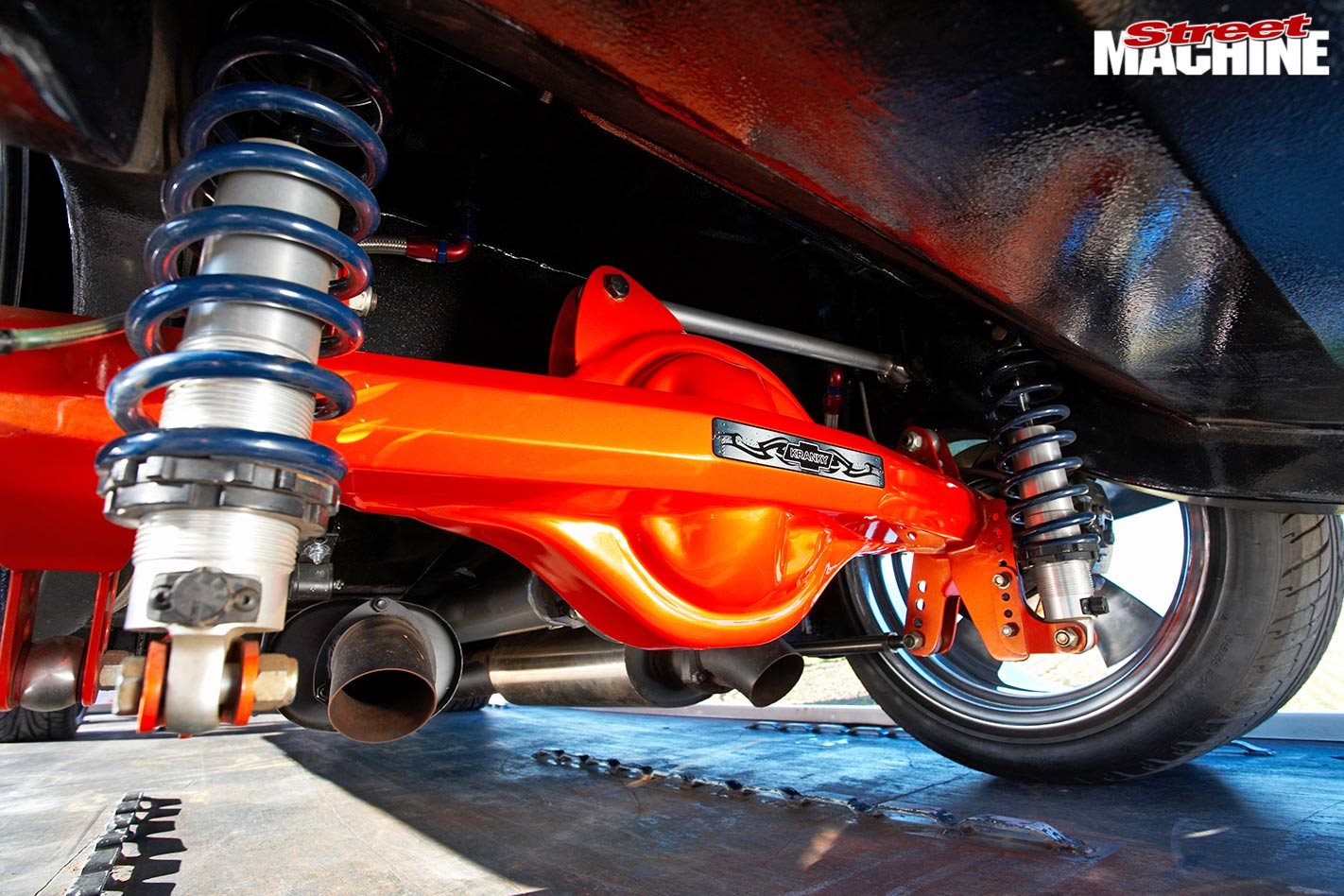 Unlike most mechanically injected engines, which run front header tanks to feed the belt-driven fuel pump, Rodney relies on a BG400 in the boot to supply enough go-juice.

To make sure the motor was on song from the outset, the boys at BG Engines got it in tune on the dyno. At 6800rpm on alcohol it cranked out a massive 1272hp and 1070ft/lb from just 14lb boost. 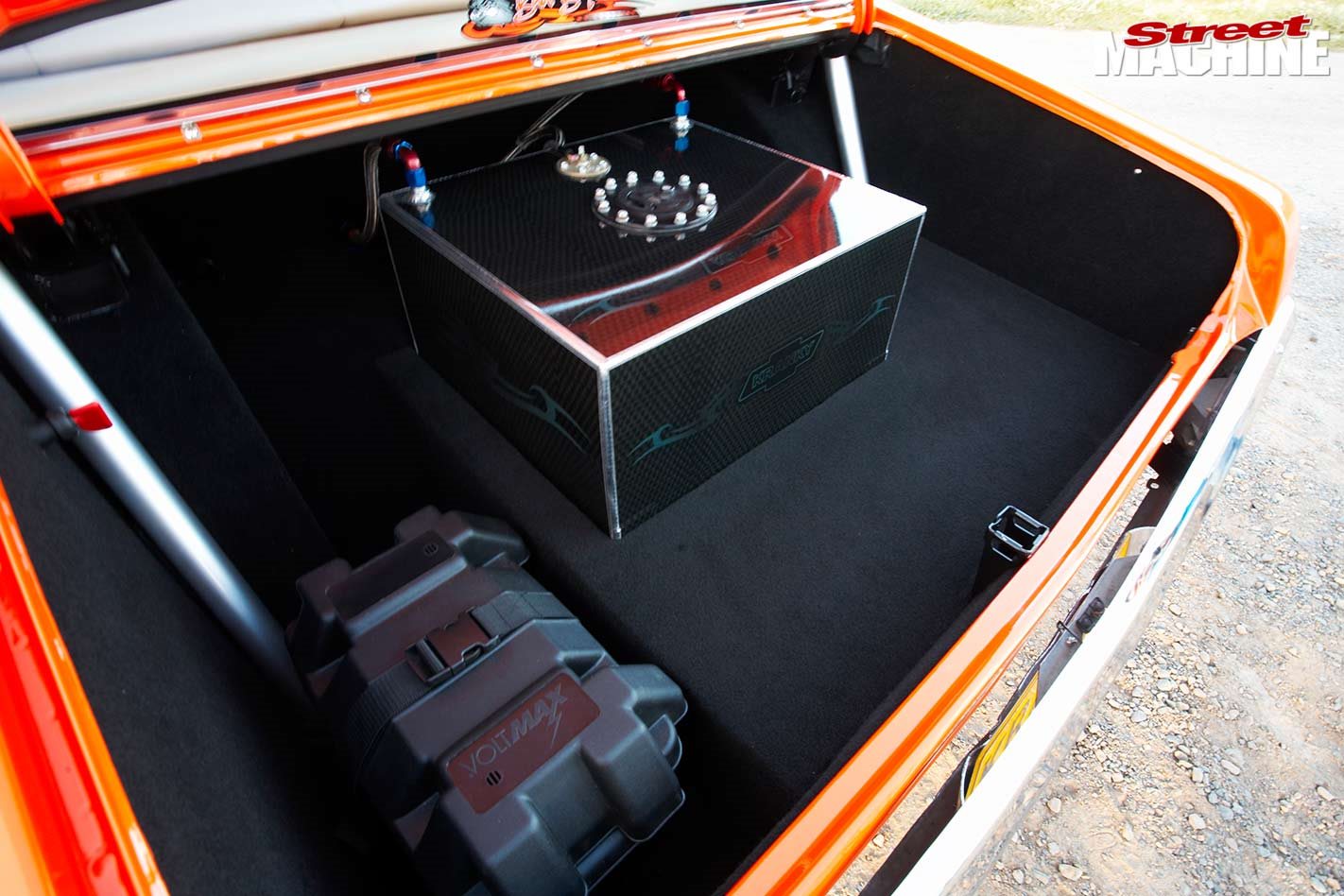 As the car was always destined to have the ringer thrashed out of it, a massive five-core PWR radiator keeps a lid on temperatures, while 2¼in primaries expel the spent gases from the monster mill via fourinch collectors. To fire the air/fuel mix, an MSD 10 distributor and leads bring the sparks.

The engine bay is super-smooth and an enormous amount of time went into producing the clean lines. The usual lumps and bumps on the firewall were removed while the standard bolt-up inner guards had their lips cut off and were then welded in for a fully moulded look. 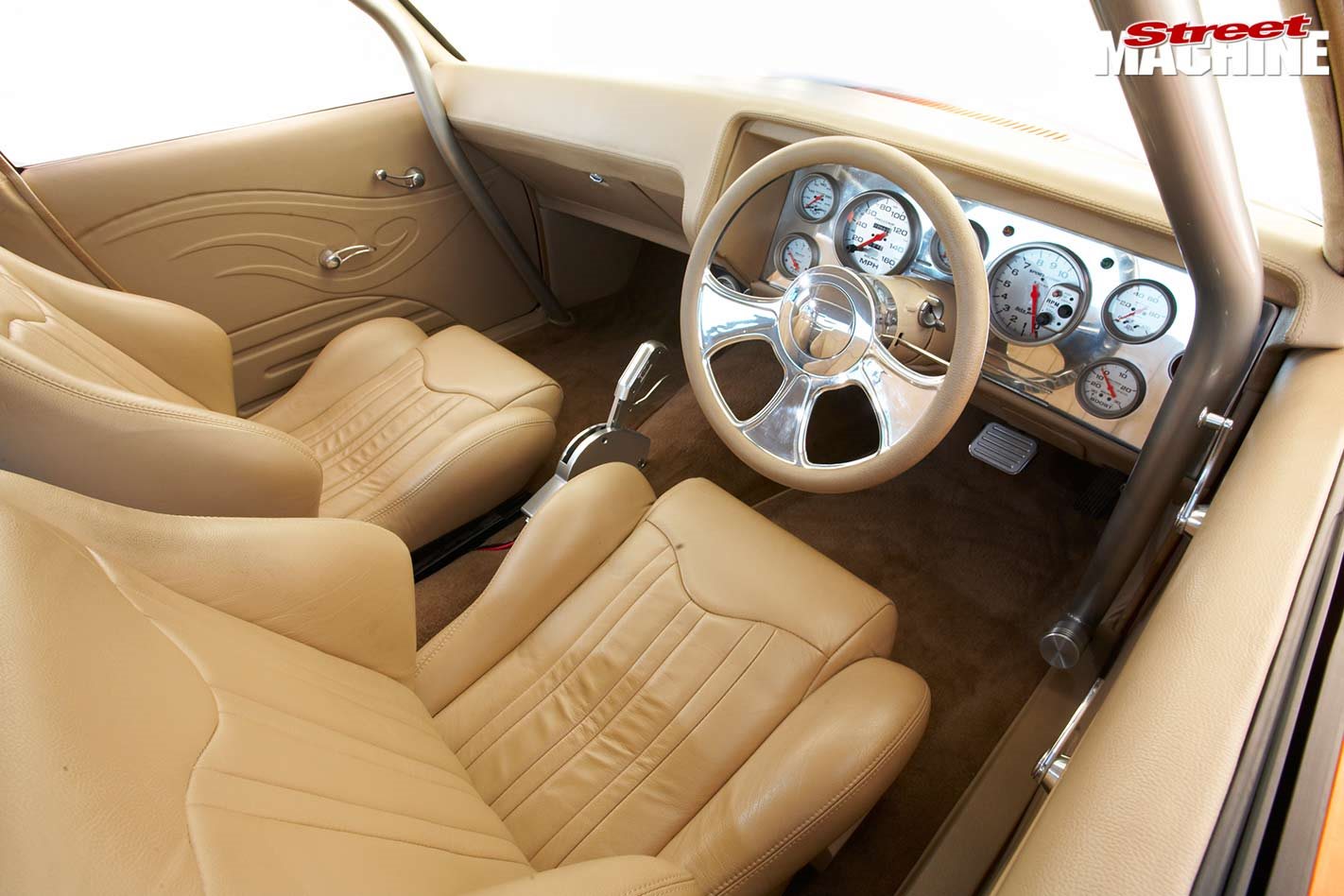 For a car that gets thrashed on the burnout pad, KRANKY is super-tidy inside, with a sweet leather trim job, Commodore buckets and a neat custom dash

Trans is a TH400 built by Active Transmissions in Blacktown, western Sydney, featuring all the usual burnout/drag car strengthening, and the converter is a TCE 4500rpm stall unit with a mechanical sprag.

Like the rest of the car, the Ford nine-inch has been fitted with the best gear: Strange Pro centre with 35-spline axles, full spool and 3.0:1 gears. 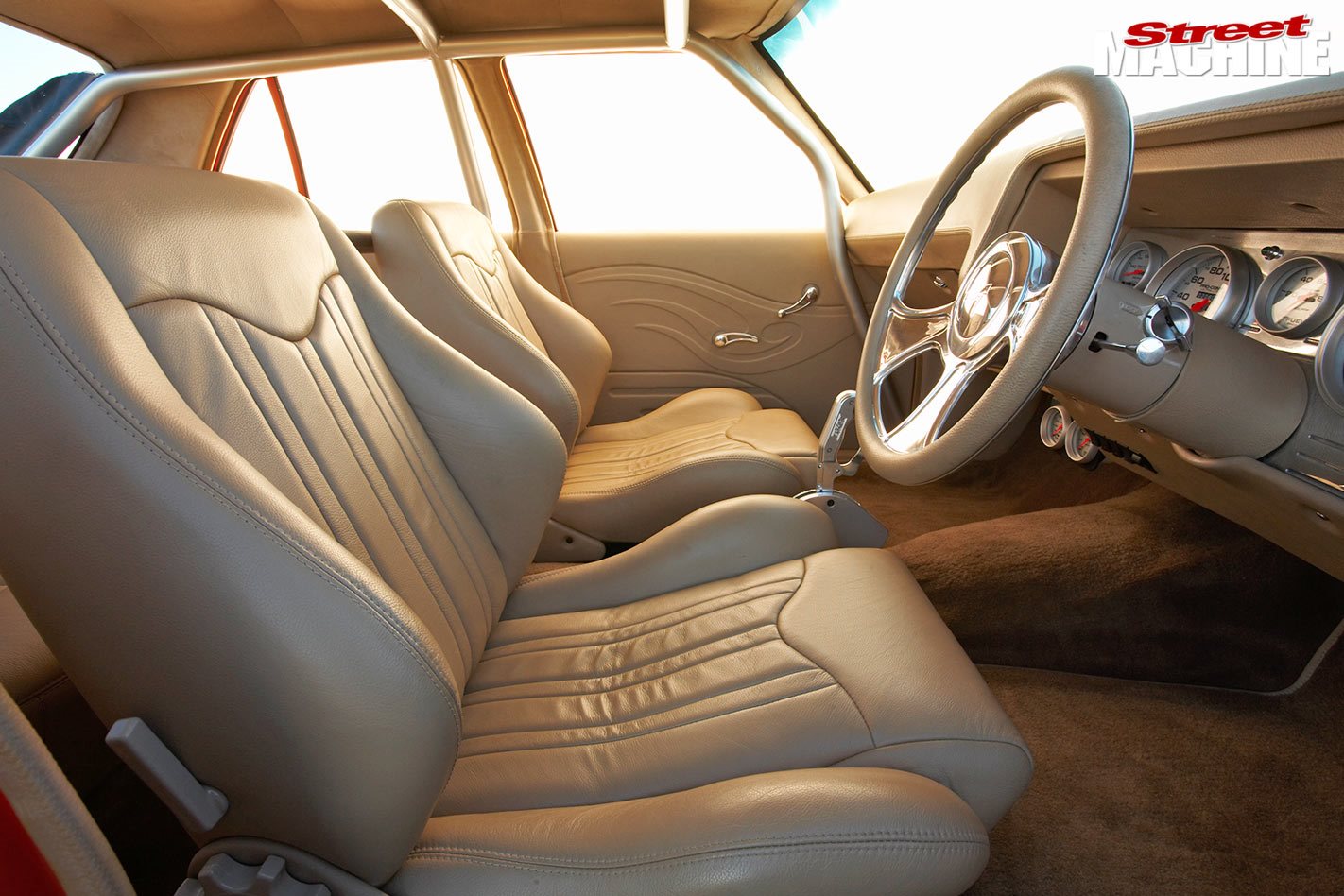 Like many burnout cars today, Rodney’s HQ ticks all the boxes in the show arena. On debut at Summernats 23, he cleaned up Tuff Street ahead of some tough competition; he landed the runner-up spot this year. 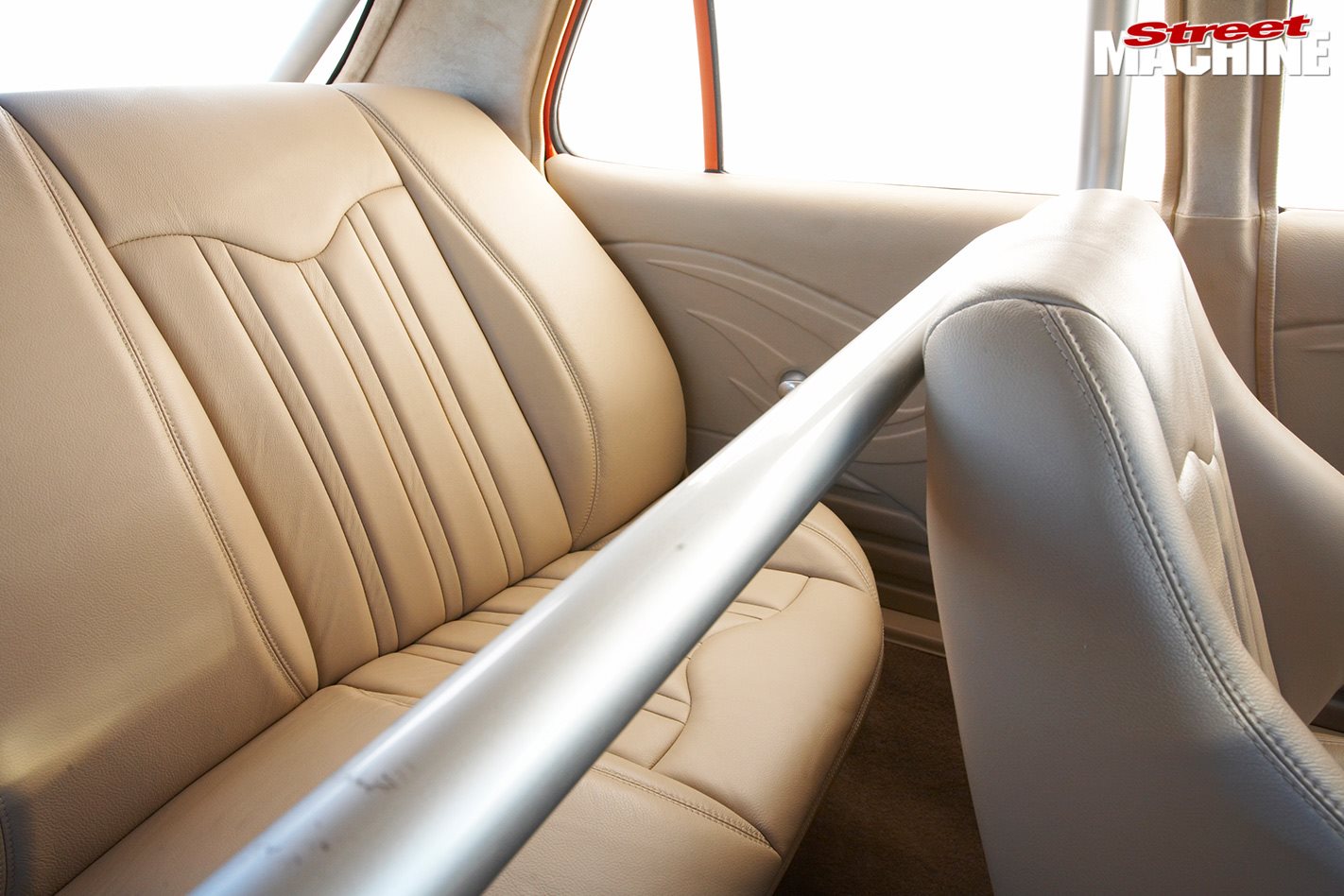 While the interior isn’t judged in Tuff Street, it’s an important element of the car’s overall success and Rodney has done an amazing job. Taupe leather wraps Commodore seats modified by Elite Custom Interiors in Gymea, Sydney, for a classy contrast with the custom orange pearl paint and silver airbrushing by Wayne Harrison from Advance Airbrushing.

All the bodywork was carried out by Rodney along with Jason Pollack from Contagious Colour in Penrith. 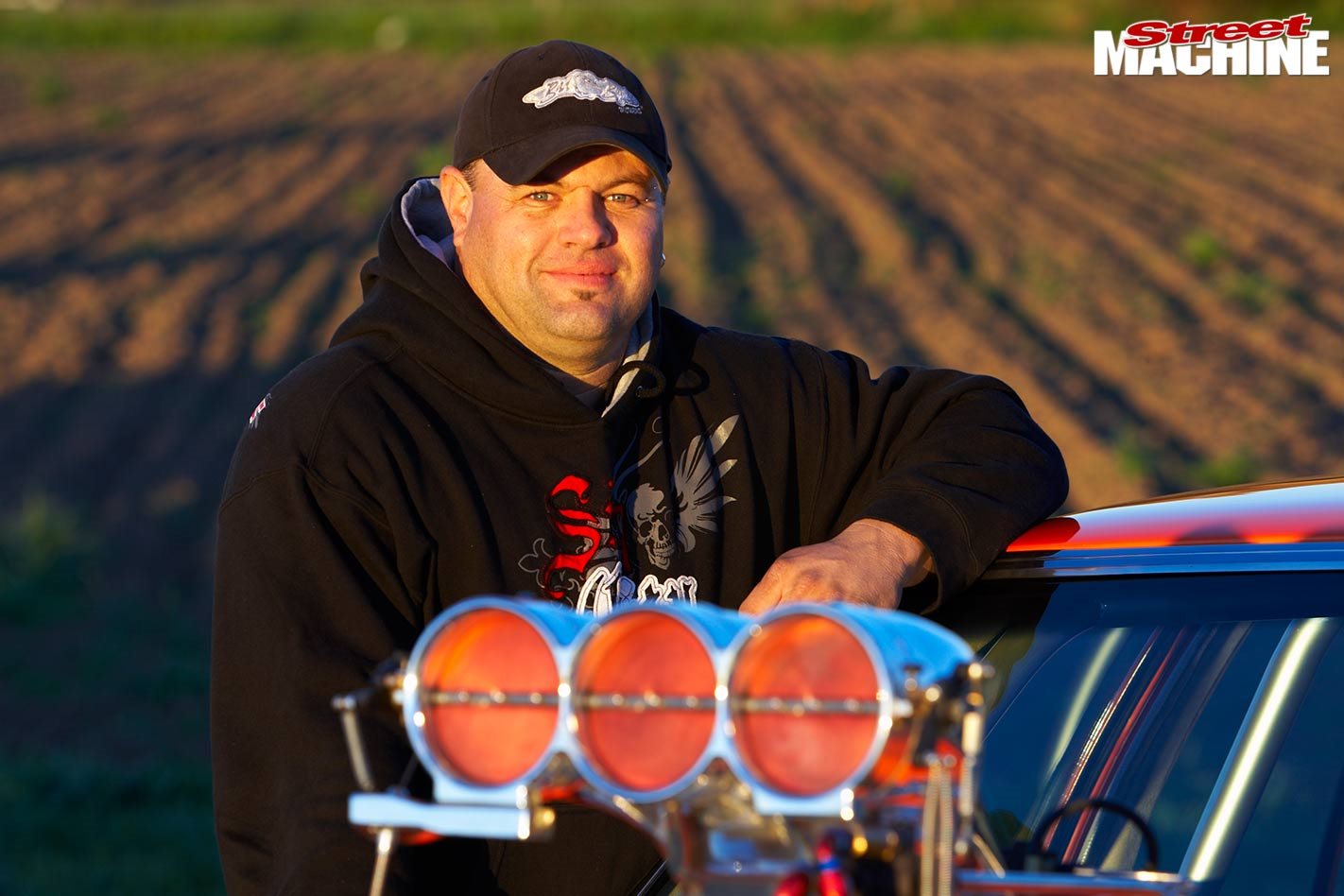 “I’ve only just started thrashing the car,” Rodney says. “It seemed too good to skid initially but I’m not a good spectator so I’m into it. A massive fire in the Burnout Masters at Summernats meant I’ve had to repaint half the car already and I’ve got huge plans for it in Tuff Street at Summernats 25.”